Seeds, teabags, broad beans and twine. Hairnets and vegetable nets and plastic bottles bundled into plastic webbing, tightly tied in thread. Veronica Ryan’s solo exhibition at Alison Jacques gallery is an explosion of materiality — if an explosion could somehow still be meticulously ordered. Entering the gallery space feels almost like walking along a beachfront littered with flotsam, jetsam and resurfaced fishing scraps; almost like stumbling onto the site of an elaborate ritual practice. Coloured ceramic seeds are arranged on circular jute rugs; bronze forms like avocados and green peppers are nestled in medical pillows. The organic and the inorganic are inextricably entangled here, with all material given a reverence and care that seems to invest them with a charged, even spiritual power. 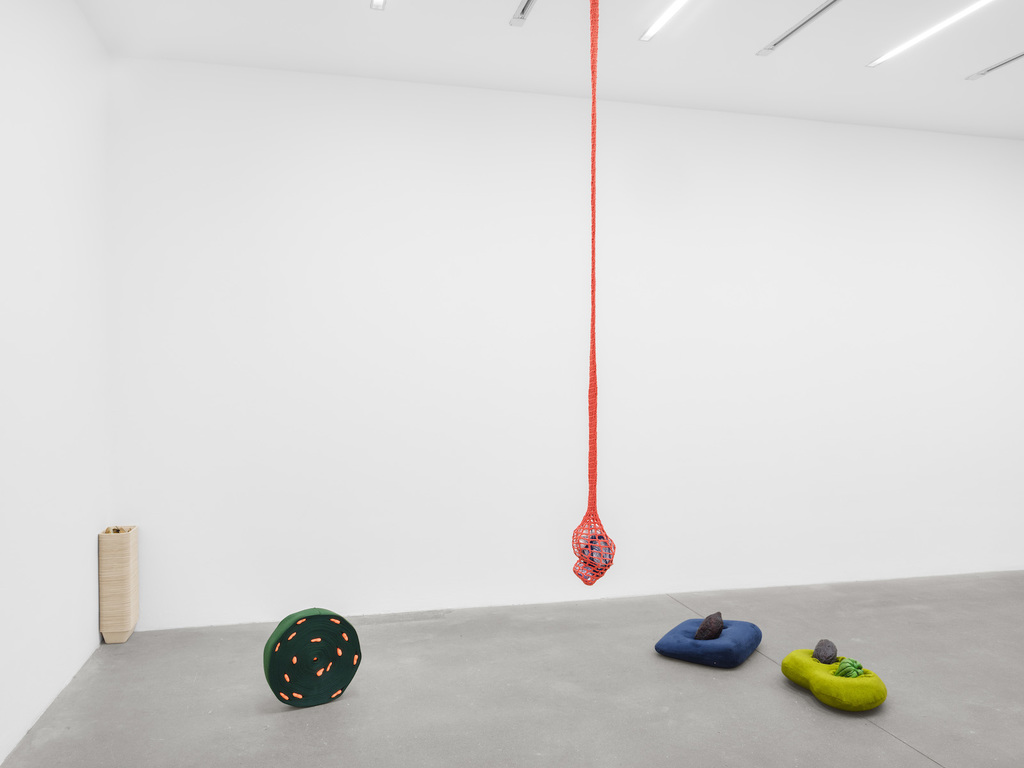 "like walking along a beachfront littered with flotsam, jetsam and resurfaced fishing scraps"

Ryan has been casting and constructing from found and organic forms for nearly five decades, creating works that evoke histories of migration, environmental change and the vibrant life of the nonhuman. Many of the works on display at Alison Jacques are formed through binding and knotting – crocheted fishing line pouches are filled with seeds and fruit stones, plastic containers are themselves contained in the kind of orange netting you might find holding satsumas at a supermarket, a tie-dyed pillowcase is bunched by multicoloured hair bands. This entanglement extends outwards from the objects, seeming to catch the viewer in a net, or network, of interconnecting ideas about the relationship between humanity and the environment; how we influence and irrevocably alter it, and, in turn, how it influences and alters us. Indeed, Ryan herself considers her bronze and ceramic seeds and stones as bound in ‘multiple conversations’ about ecology, psychology and culture — something that feels obvious when looking directly at the objects and how they waver between detritus and sculpture, weighty and precious art forms and insubstantial, precarious grains and scree. Neither one or the other but always both, Ryan’s works are uncanny and paradoxical assemblages that seem to challenge the very nature of art and making, absence and presence. 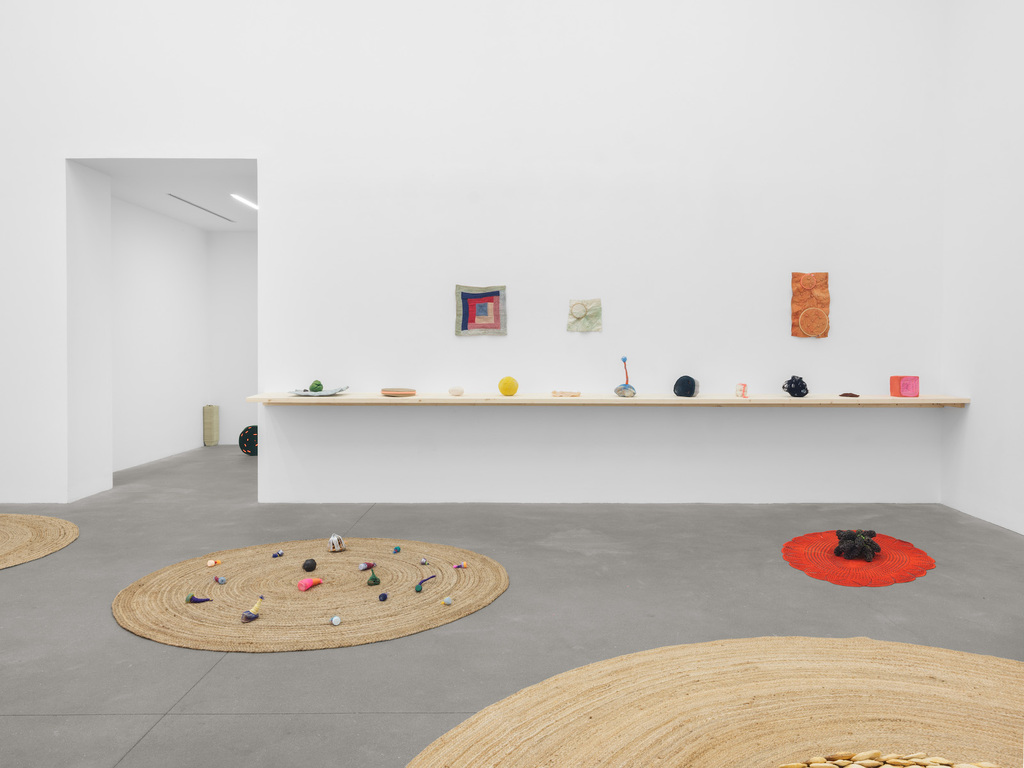 "they waver between detritus and sculpture"

‘There are key words which are important for me,’ Veronica Ryan told historian Sheena Wagstaff in 1993: ‘residues, traces, memory, deposits.’ This was abundantly clear in Ryan’s 2021 exhibition Along a Spectrum, at Bristol’s Spike Island – there, like at Alison Jacques, colourful fishing line sacs hung from the ceiling and from high on the gallery walls, the stones and ceramics within them looking like strange eggs, cargo or catch that might, any minute, be hauled up, or that might have been carefully placed as anchors. There too, were groups of soursop skins and cocoa pods cast in clay and glazed with volcanic ash from Alliouagana, the name native Caribs called the island of Montserrat, where Ryan was born. And so, despite their indeterminacy, Ryan’s fruits and seeds are never neutral. As her key words suggest, they are residues and traces of the histories of global trade and dislocation. 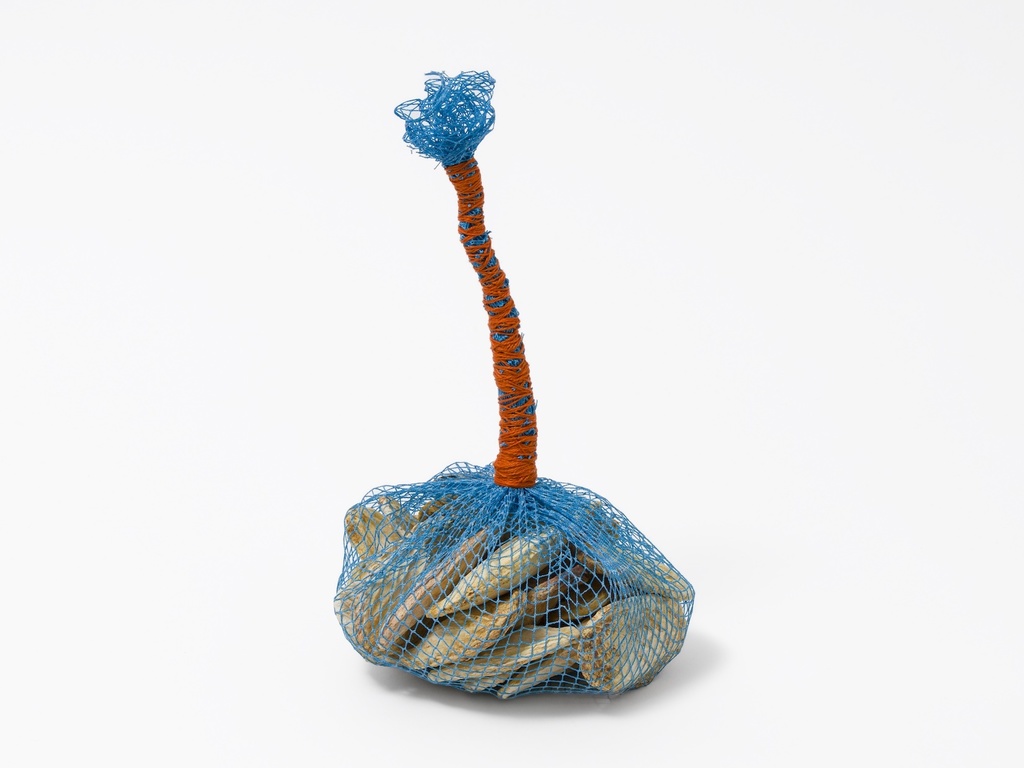 "residues and traces of the histories of global trade and dislocation"

Intricate and beautiful, Ryan’s works are also undeniably abject – made from objects that have been cast out, rejected and regarded as waste. As Julia Kristeva wrote, ‘what does not respect borders, positions, rules. The in-between, the ambiguous, the composite.’ Of course, as the suggestion of ‘borders’ implies, the concept of ‘abjection’ has also been used to consider the state of marginalised groups, particularly women, people of colour, and refugees. Ryan’s determination to create works that reside in this ‘in-between’ ‘ambiguous’ space should then also be seen as a reclamation of the abject and othered – a work of salvage and subversion that revels in overturning established systems and hierarchies of power. 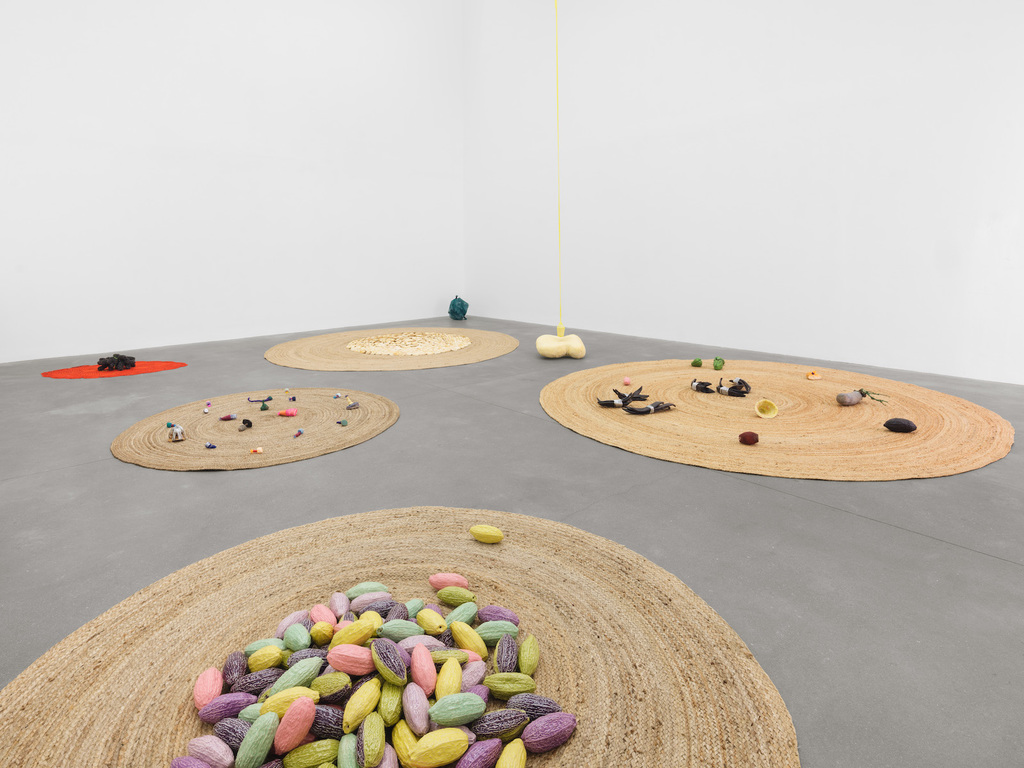 This element of Ryan’s work was made abundantly clear in 2021, when three sculptures of hers were unveiled in Hackney. Following a comprehensive consultation with Hackney residents in 2020, Ryan was commissioned to create a public artwork, intended to serve as a permanent expression of solidarity with the Windrush Generation. She created large-scale sculptures of fruits from the Caribbean – Custard Apple (Annonaceae), Breadfruit (Moraceae), and Soursop (Annonaceae) – that drew on her memories of shopping at Ridley Road market as a child. In recognition of both Along the Spectrum and her Hackney Windrush commission, Ryan was recently nominated for the Turner Prize 2022. 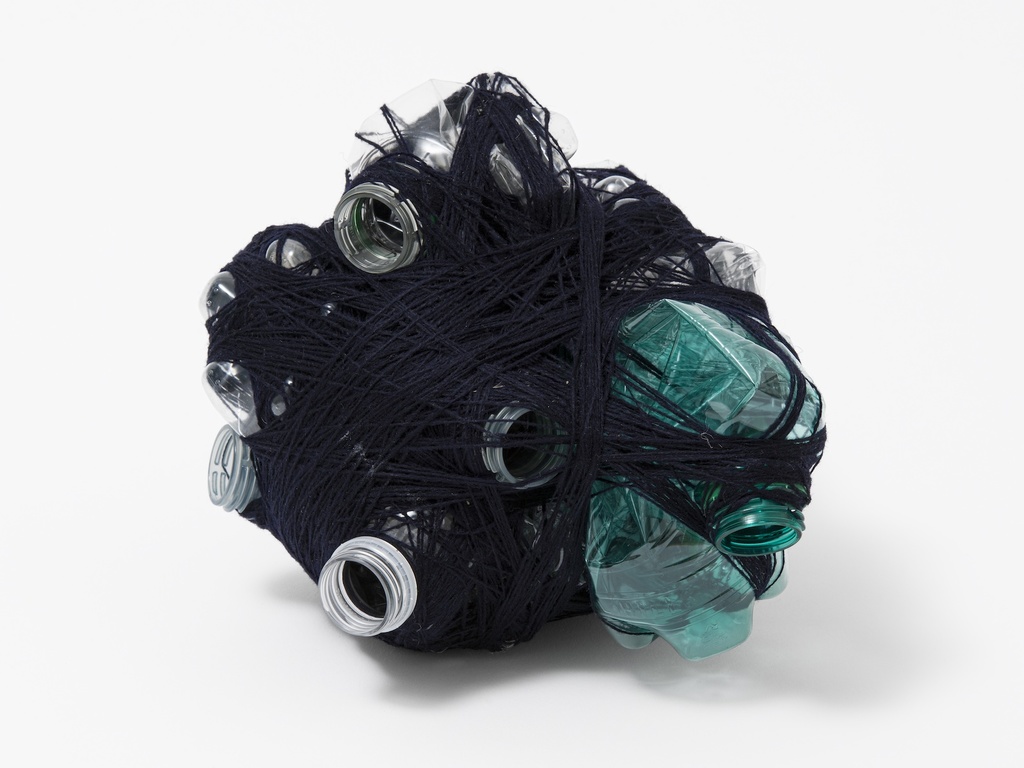 In Alison Jacques gallery, hanging from the wall on the left, are two small textile works. Like many of Ryan’s pieces, they are small and relatively unassuming at first glance. But, looking closer, they expand and deepen, seeming to pull Ryan’s whole creative project into their threads. In both the textiles – titled Collective Moments III and Collective Moments IX – broad beans are threaded into the fabric, with embroidery hoops still attached. The effect is that of a three-dimensional map; a textured and fantastical terrain. First taught to sew by her mother, a quiltmaker, Ryan has said she now understands the act of stitching as a means of metaphorically suturing disconnected times: ‘the backstitch is a way to connect the past with the present’. In this, her textile work is reminiscent of Louise Bourgeois, who proclaimed her ‘fascination with the magic power of the needle’ was connected to the resolution of trauma. ‘The needle is used to repair the damage,’ Bourgeois said. ‘It’s a claim to forgiveness.’ Yet, as in most of Ryan and Bourgeois’s work, there is a paradox at play: to stitch is, of course, to repair and puncture simultaneously. Resolution and reconciliation is complex; the work of repairing trauma is necessarily repetitive, as traumatic memories, by their very nature, constantly return. 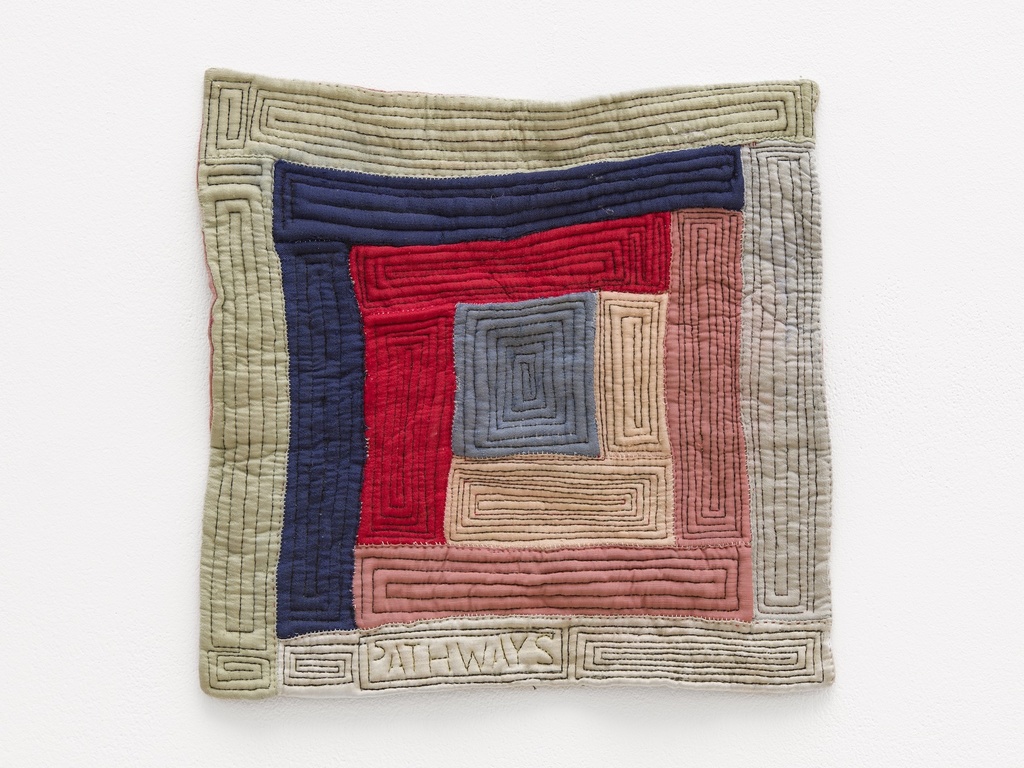 Perhaps this is why, in Ryan’s two broad bean textiles, the hoops remain in place – the works seem ready to be taken up again, to be unpicked and re-stitched over and over. Like Penelope’s weaving in the Odyssey then – the weaving she unweaves each night in an attempt to buy time – Ryan’s textiles that attempt to suture and ‘connect the past with the present’ are about both making and unmaking. In other words, they are about time, and the process of creativity and destruction itself. Ostensibly simple, made from modest and natural materials, Ryan’s stitched, tied, threaded and bound forms are works of myth – symbolising alternative forms of knowledge and systems of meaning, and how these can be articulated materially. Resistant to narrative, nonetheless they seem to speak.