If you want to make something but you don’t have much time, often you have to cut corners. You have to use what you have to hand. In the 1960s, Maria Bartuszová’s time was squeezed by childcare and working to commission, and what she had to hand were children’s party balloons and condoms. She repurposed them into sculptural vessels, filling the inflatables with plaster and letting the pull of gravity or the pressure of water mould them into strange shapes; dense droplets. So, from the start her sculptures grew out of play — both childish and erotic — and relied on natural processes and chance. The method and the material perfectly align to produce pale bulbous plaster forms that feel at once like cute and tactile toys, and like ancient organic structures – raindrops, dew, seeds, eggs and grains.

"Bartuszová’s sculptures thrum with the uncanny" 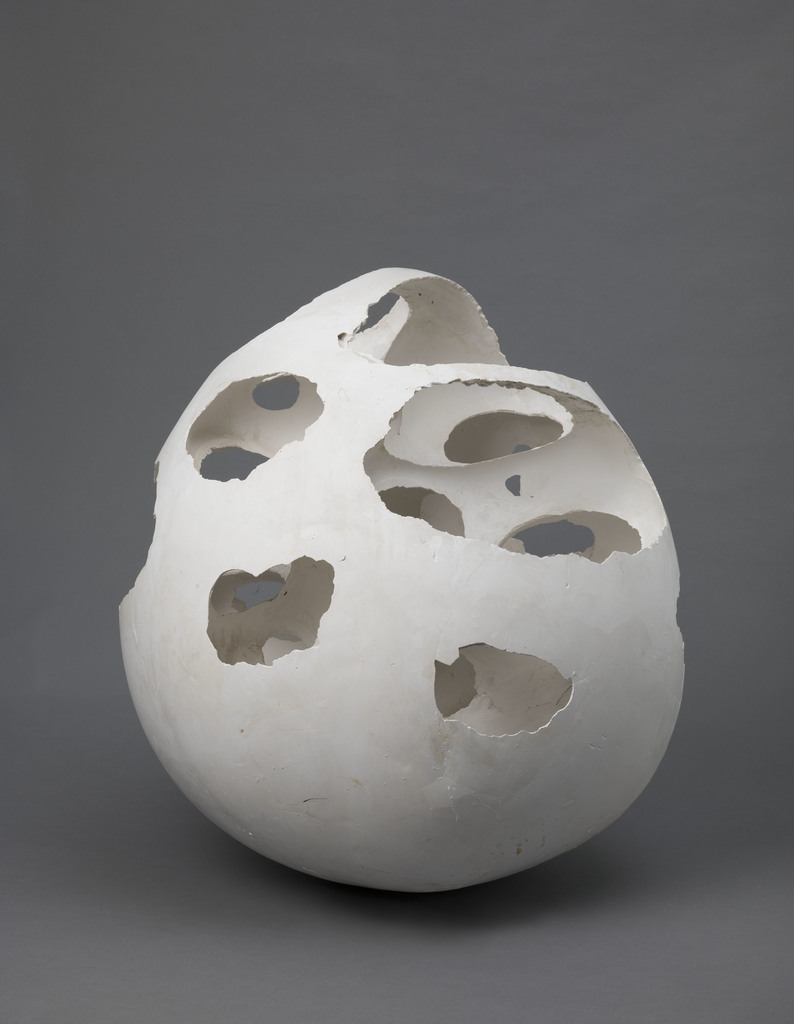 Bartuszová’s sculptures thrum with the uncanny. They are everything and nothing; bodies and hollows and shells and fragments and weird eruptions. They seem geological, in the sense of abiding by the logic of the earth, yet also seem designed precisely for a human scale. On many of the small, early sculptures the traces of Bartuszová’s process are clearly visible — knotted balloon lips and drip points immortalised in stone. It is impossible not to translate them, Rorschach test style, into bits of embodiment — belly buttons, nipples, fleshy openings – but they also remain static. Looking at them feels like finding faces in tree bark and shell patterns, or, indeed, like calling a balloon’s opening its ‘neck’. In other words, her works reveal the interconnected nature of humans and our environment: our bodies, plant bodies, animals, rocks and rain all made up of curves and globules; all strange living shapes. 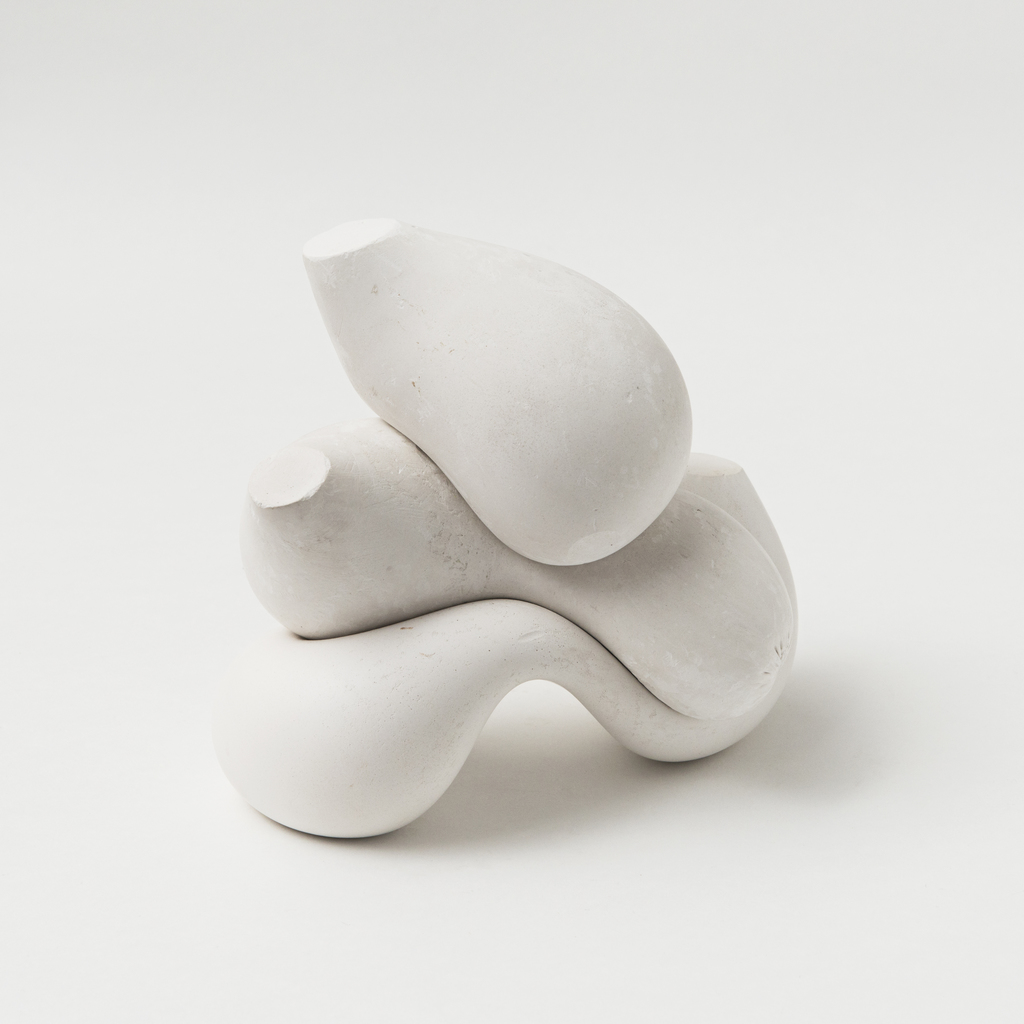 Tate Modern’s new exhibition of Bartuszová’s sculptures is suitably understated for an artist who almost exclusively worked in a monochromatic palette of plaster, silver and bronze. However, it also expertly uncovers the depth of thought and true range of an artist who, despite being prolific, remains elusive. Bartoszová died on December 22, 1996, but her work wasn’t presented to international audiences until more than a decade later, in 2007. Even now, years on, she is a mysterious figure that even the Tate catalogue struggles to flesh out fully. Like her pale sculptures, Bartuszová seems ghostly, yet there are a few details that gesture towards her artistic obsessions, as keys gesture towards locks. 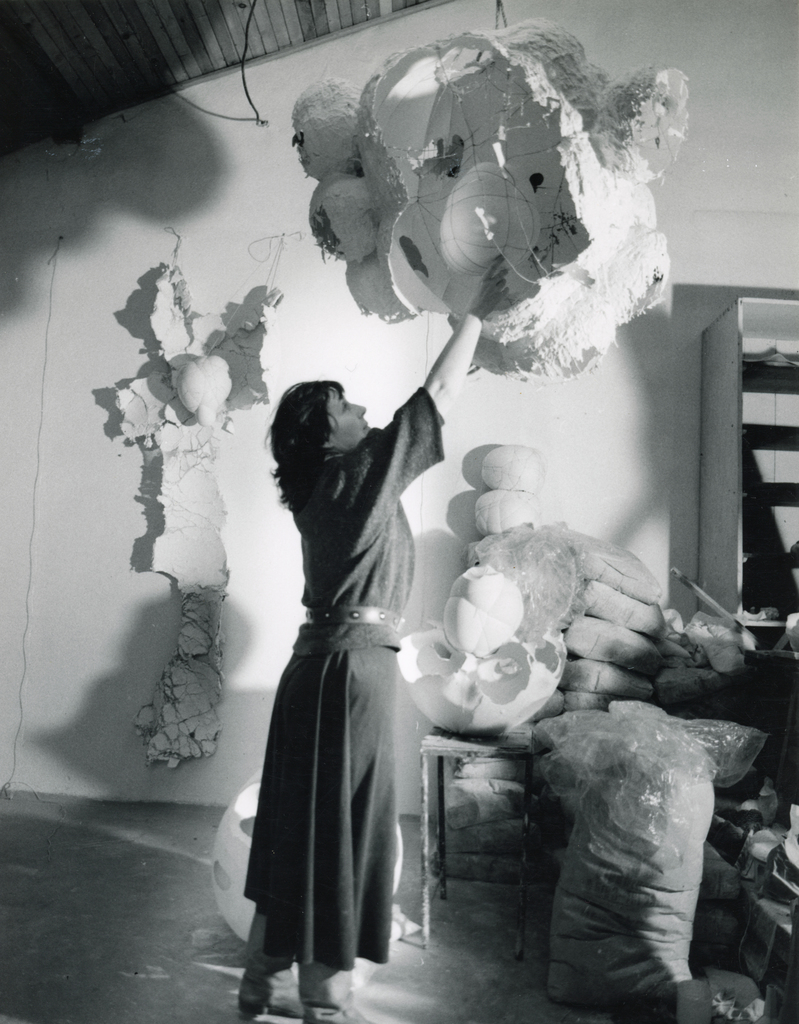 "at once like cute and tactile toys, and like ancient organic structures – raindrops, dew, seeds, eggs and grains"

Although she was born in Prague in 1936, Bartuszová spent most of her life and career in Košice — then the second largest city in what was Czechoslovakia; now the largest city in eastern Slovakia, near the Hungarian border. In the 60s, when Bartuszová moved there with her husband and daughter after finishing her studies at Prague’s Academy of Arts, Architecture and Design, Košice was developing as a cultural and industrial hub, with the Communist programme of modernisation creating new mass housing projects and public buildings. Many of these sites offered the opportunity for public artworks, and, as a member of the artist’s union, Bartuszová secured a number of official state-funded commissions. 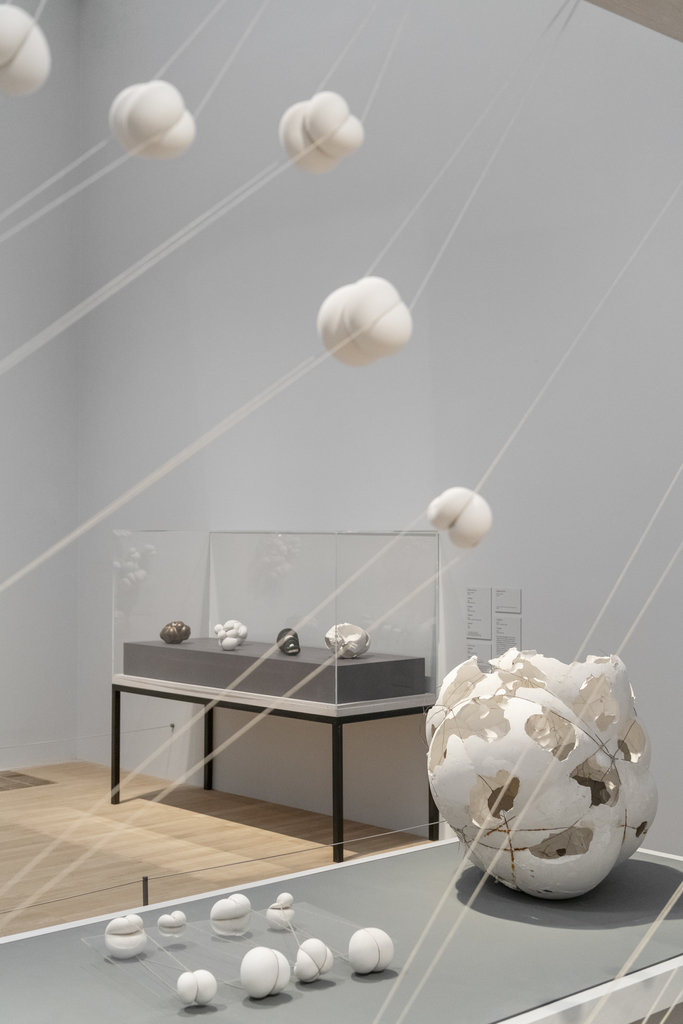 Again, it seems that play was often Bartuszová’s starting point. In one of the exhibition’s side rooms a small plaster sculpture leans on a cylindrical leg of sorts, metal bars crossing its flat front: a model for a playground climbing frame. Near it is a model for a slide that looks something like a bundle of intestines. Elsewhere, the elongated droplet of one of her earliest works, titled simply Rain (1963), is echoed by the bronze fountain Bartuszová designed for the Institute for Physically Disabled Children. In these works, and in her monumental reliefs for the Southern Slovak Paper Mill and Eastern Slovak’s Steelworks, Bartuszová seems intent on bringing the beautiful, intriguing, uncanny and experimental to functional institutions and industrial structures — bringing art to life.

"In the 1980s, Bartuszová got into destruction" 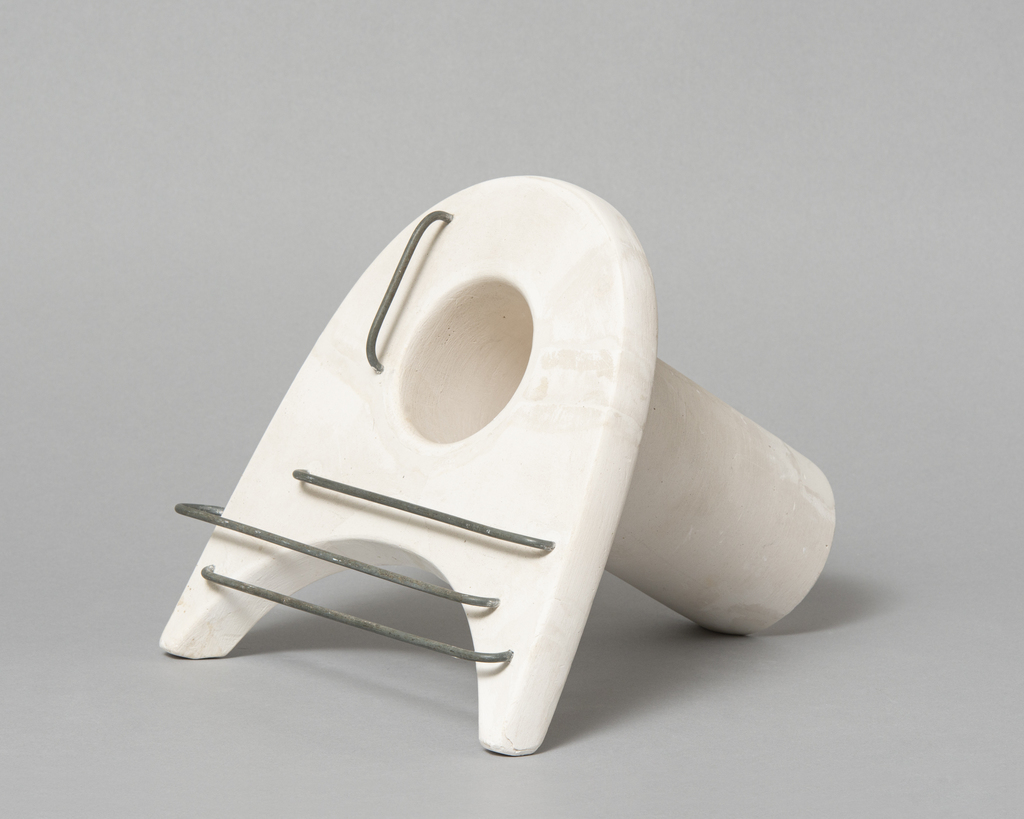 Yet, while these projects provided her with a counterpoint to her studio work, as well as the opportunity to realise her ideas on a vast public scale, at the same time, the Cold War closed Košice off from contact with Western Europe, and Bartuszová worked in relative seclusion, with few opportunities aside from state commissions to exhibit her work during her lifetime. In 1968 she defined two of the major influences on her creative work as her ‘feelings of anxiety in totalitarianism, and the Cold War tensions.’ While her work may evoke play, wonder and imagination, it was also motivated by instability and a deep unease. 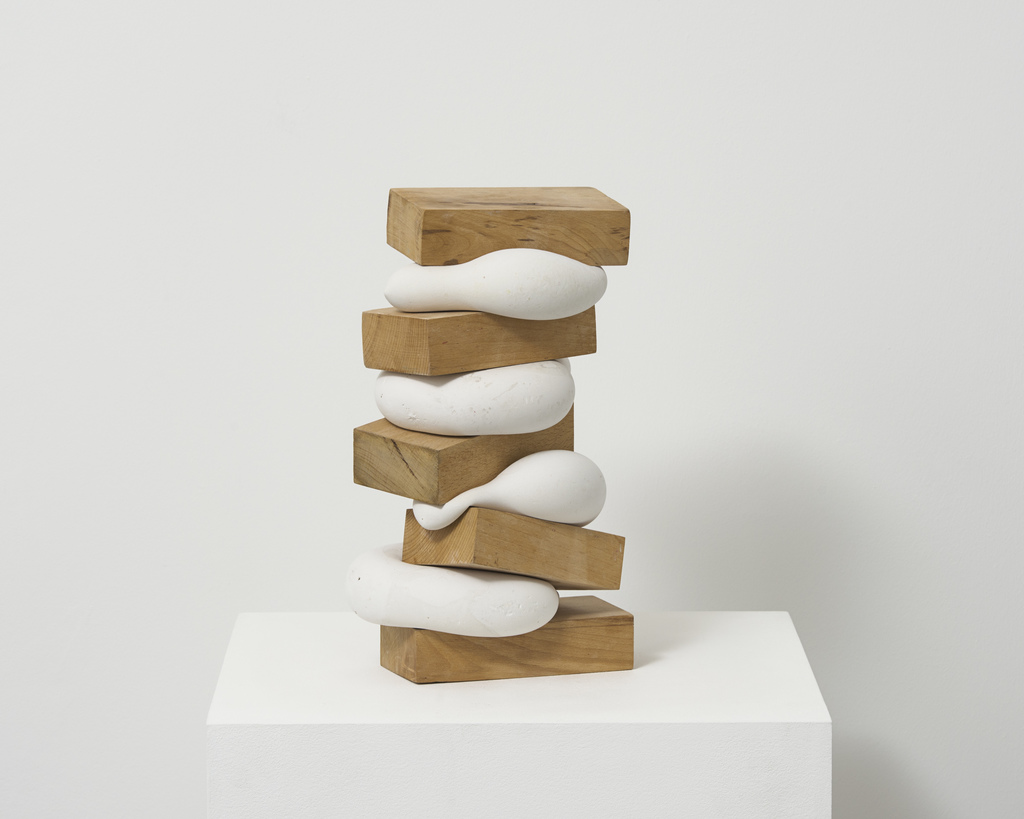 In the 1980s, Bartuszová got into destruction. Perhaps it was personal (her marriage was breaking down), perhaps it was political (those Cold War tensions), but she shifted from using balloons as cocoons for her plaster to using them as weapons. Instead of pouring plaster into inflatables, she began pouring it over the outside of them, before forcing the balloon to burst; the plaster cast to explode. The resulting forms are fragile shells; hollow and broken as if a creature has just emerged from them and disappeared. Often, Bartuszová placed these shells inside one another, creating what she referred to as ‘endless eggs.’ On the wall at the entrance of the exhibition is another phrase of Bartuszová’s that describes these stratified nests: ‘a tiny void full of a tiny infinite universe’ — empty and infinite at the same time. 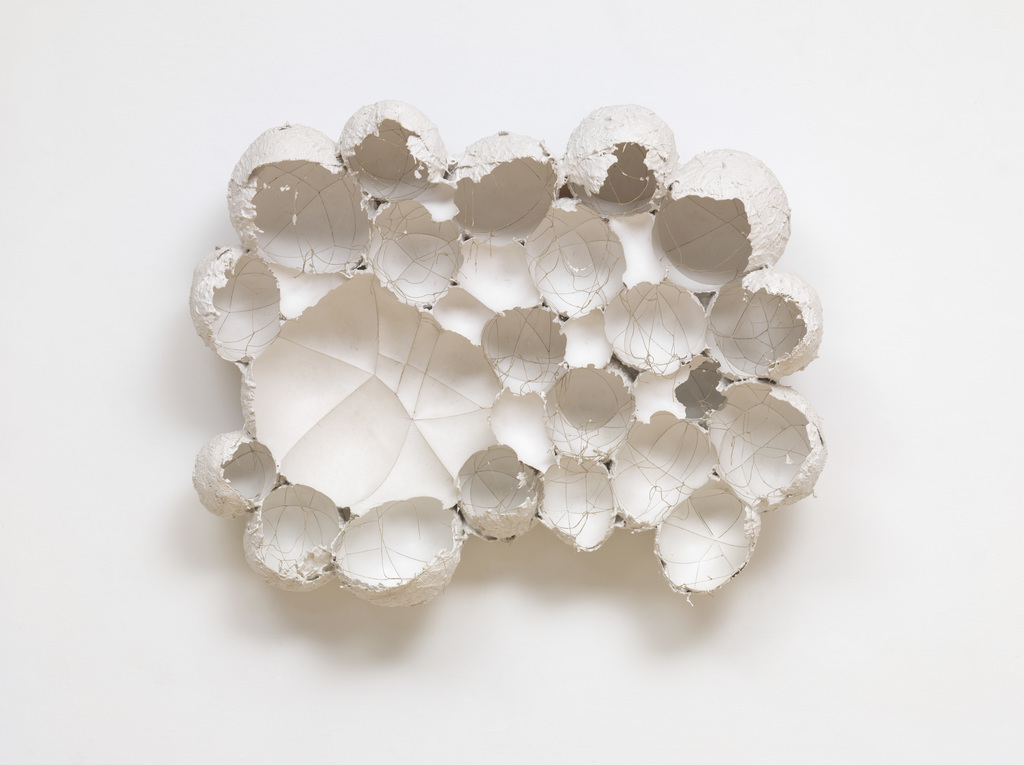 "Bartuszová made work that manages to evoke emptiness, fear and destruction, while also singing of rebirth, play and transformation"

She also began making work of constraint. Using ropes, strings and hoops to bind and suspend her pale globules – making them contort like flesh in corsets — Bartuszová suggested these ties ‘could be symbolic of human relationships or the constraints that limit the possibilities of living things – the diseases and stresses that undermine what is alive and already restricted by its lifespan.’ A particularly striking work layers wooden blocks and blobs of plaster in a teetering Jenga-like tower, the pale rounded forms squeezed and squashed. It looks like it could topple at any moment; like the white stone is seeping, escaping and alive. And yet, it cannot get unstuck, cannot wriggle free from its restraints. 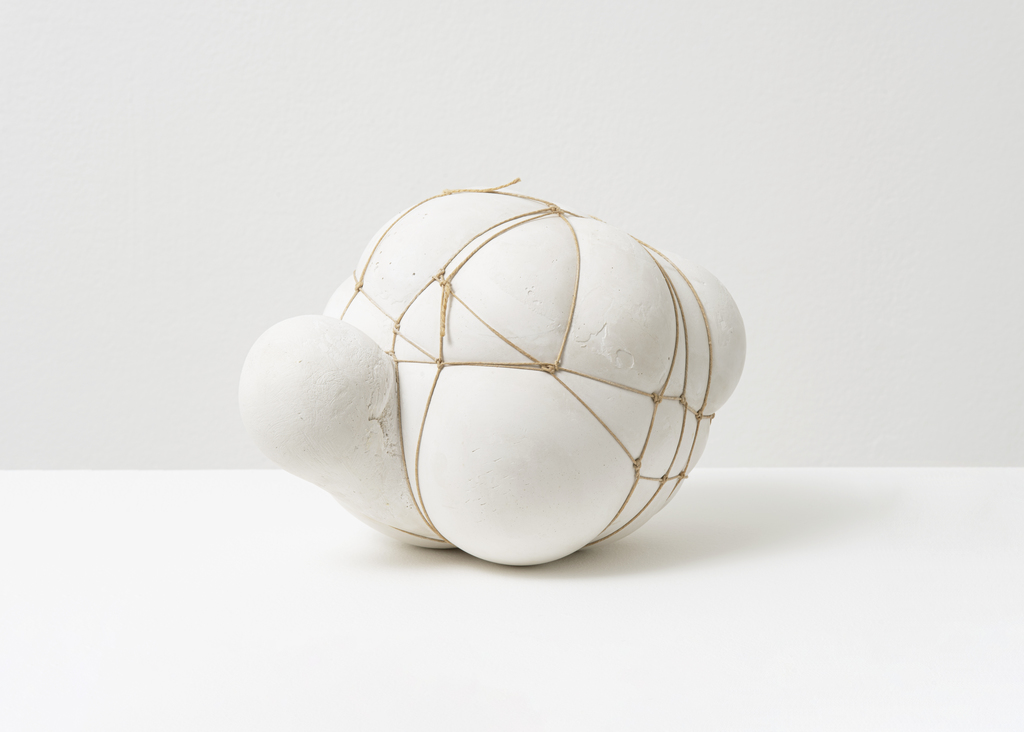 From cheap materials, Bartuszová made work that manages to evoke emptiness, fear and destruction, while also singing of rebirth, play and transformation. Her sculptures – ostensibly so simple — speak to the fragility of existence but also the resilience of life. This is perhaps best captured by two photographs in Tate’s display. In one, a monumental spherical sculpture seems torn at the centre; ripped into two forms which balance gently on top of each other. Metamorphosis, Two-Part Sculpture was created by Bartuszová in 1982 to stand at the entrance to the Košice crematorium. It is a vast stand against death, but it also seems to gesture to endurance, to the eternal, to a great balancing act between life and its end. It is a world ripped asunder, and it is a great monument to transformation and renewal. On another wall, the second photograph is of a young boy wearing sunglasses. In his hands is one of Bartuszová’s bulbous and strange sculptures, and his face is breaking into a cheeky and thrilling smile. The photo is from a workshop with blind and partially sighted children for whom Bartuszová created organic forms, designed to be explored by hand. Tactile toys, ancient structures, and infinite universes, all at once.