In an era when identity divides us more than policy, what’s the point of a portrait? When fake Instagram accounts, finstas, have become the norm for many teens reeling against the pressures of perfectionism online, why attempt to achieve a likeness? Unless, of course, it’s for likes.

How can we be expected to concentrate on an ‘I’ when the world is frenzy-whipped by three of them, inflation, immigration and identity politics? 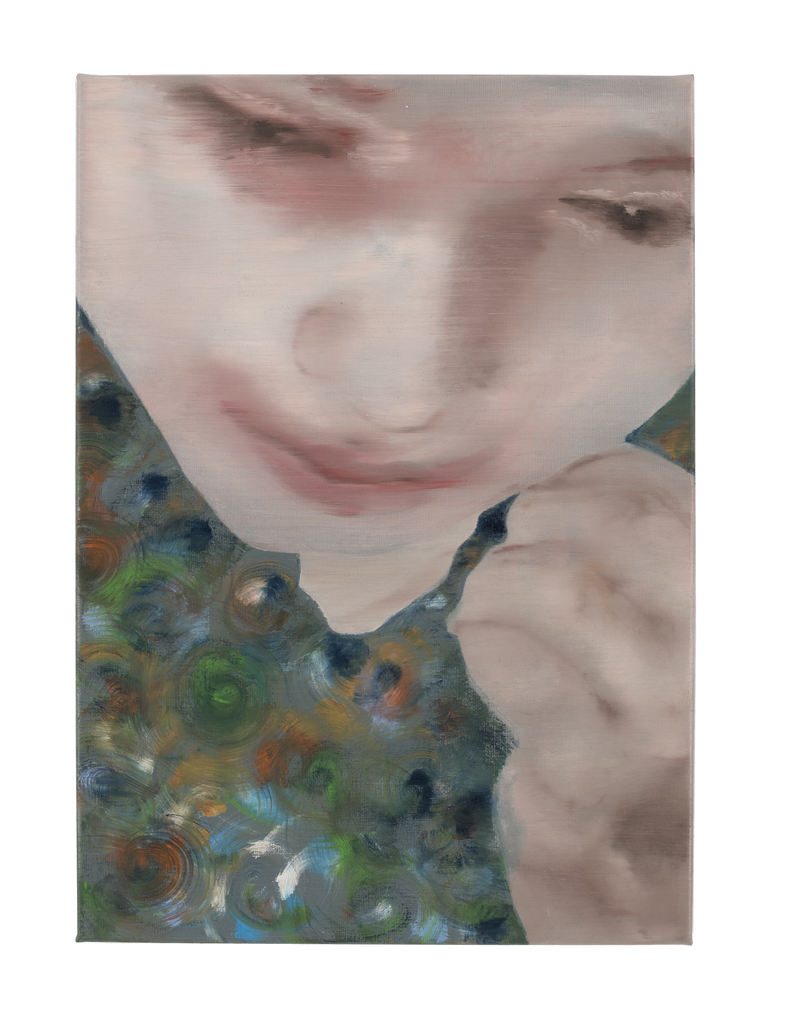 "It sounds strange, but I hate the word portrait"

‘People are so divided’, says the Dutch artist Katinka Lampe, because we all exist in our own realities. As such, she says her process involves ‘trying to get a grip on my world, things that I don't understand.’

Her exhibition Anima Mundi in the West End’s Workplace Gallery is the most recent event bearing witness to the non-event of portraiture. In the past few years, London has seen the para-portraits of Lynette Yiadom-Boakye, the theatricality of Ryan Mosley, the vibrant pastiches of Kehinde Wiley, Gillian Wearing’s lockdown unmasking, and the flat snapshot encounters of Sarah Ball just last month. 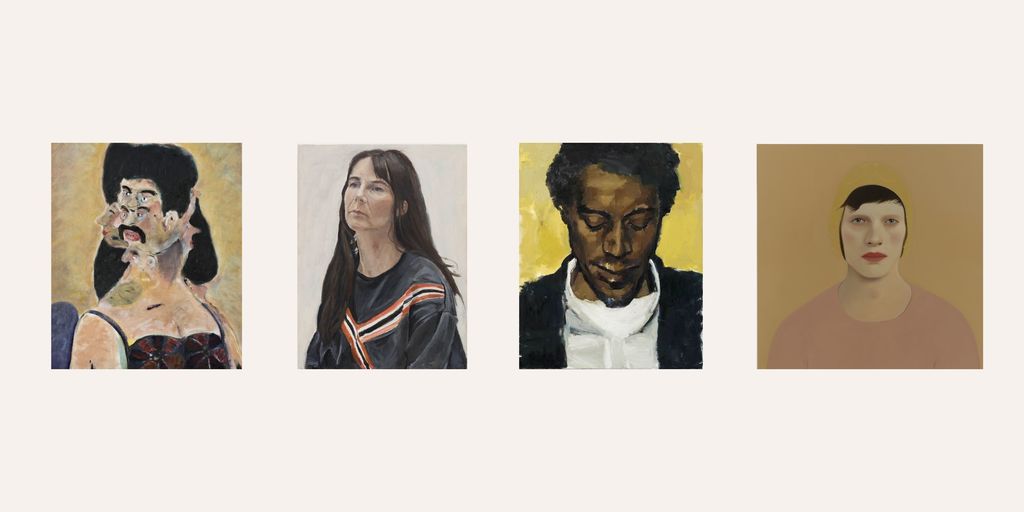 Interviewing Katinka Lampe on the occasion of her debut solo exhibition in the UK, I ask if she can describe her practice, 'before I start putting my own interview-y stuff onto it'. Nothing strange here. I often begin interviews by asking an artist to describe her own practice. But with Lampe it's different. Her work invites the viewer to project herself into it the frame with a bewildering push-pull – partly because the artist goes to such great lengths to paint herself out of it. 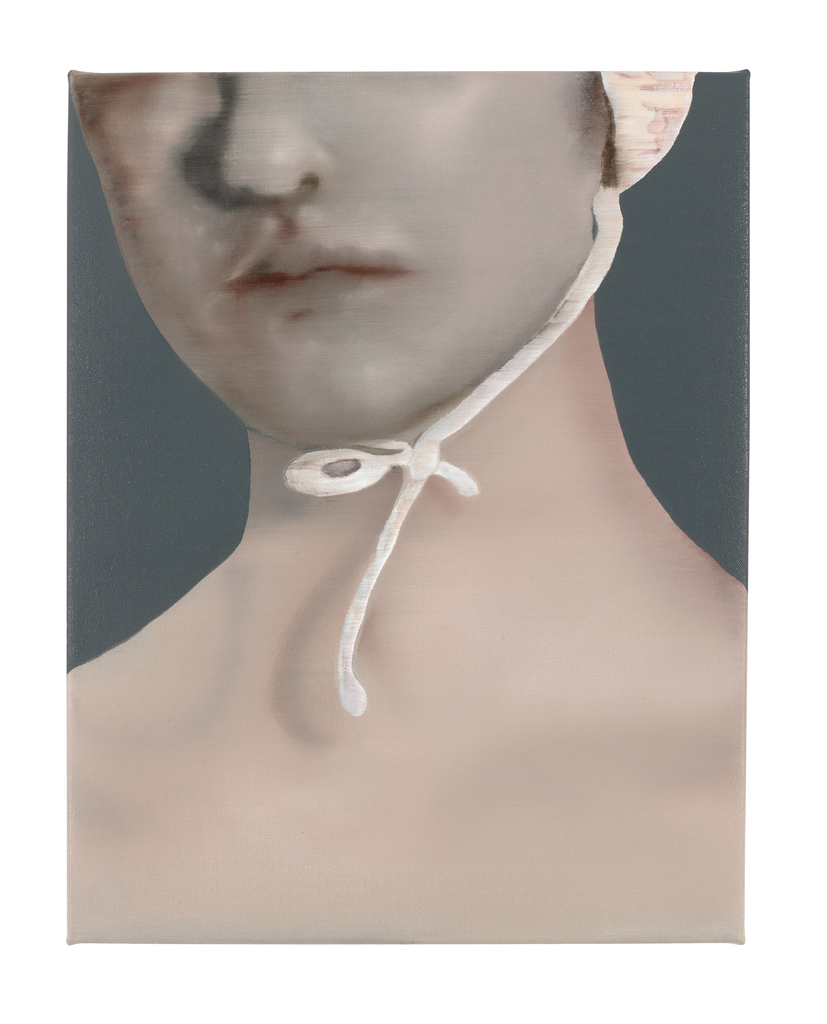 'It sounds strange,' she says, 'but I hate the word portrait. So that's my challenge. I always paint portraits but it's never about reality.' Right. Traditionally speaking, a portrait is supposed to communicate something about the model to the viewer – whether she is powerful, noble, generous, beautiful, etc. But Lampe turns that tradition on its head. It’s as if she uses her sitters to say something about painting – or perhaps something more abstract beyond painting. You could call her works anti-portraits.

'Yes. A sitter suggests an academic way of painting and working, and that's not what I want. Of course, the craftsmanship which I've built up the last twenty years is something I like, because I have these tools. But it's not about portraying people.'

"You could call her works anti-portraits" 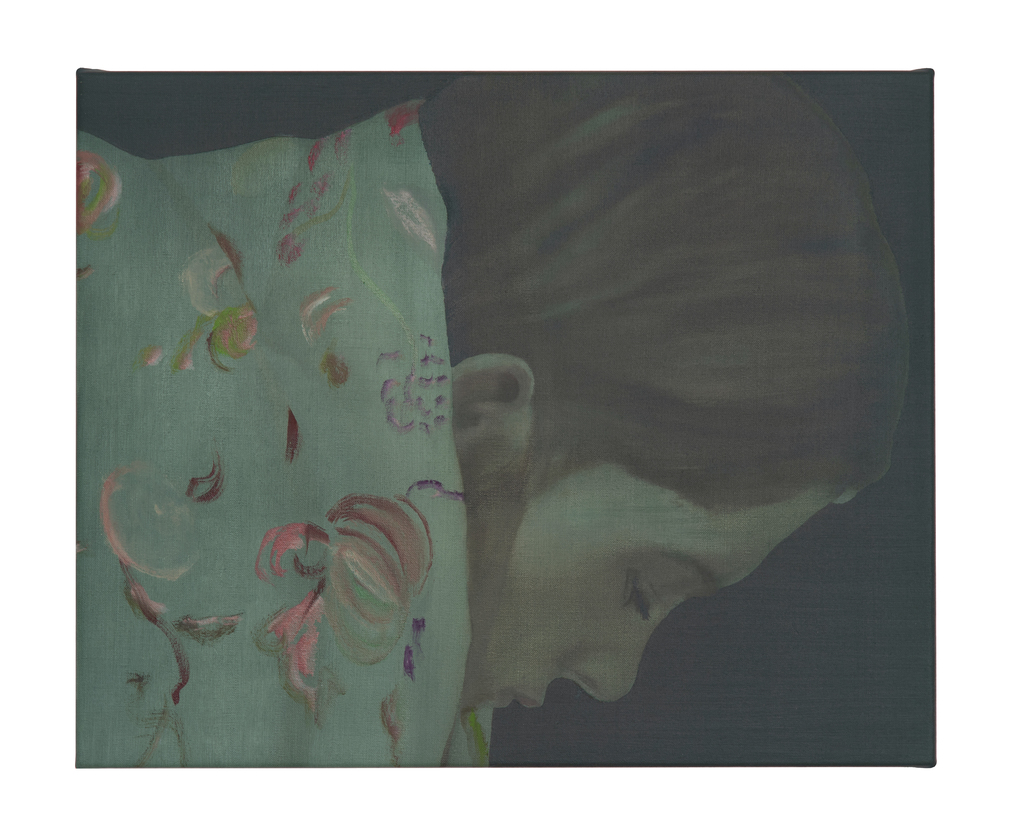 This might sound somewhat cake-and-eat-it, until you start looking closely at these paintings. They are heavily mediated. More often than not using young people, Lampe stages a model, ‘I make a sort of in-between reality, because they are playing a role. They aren’t posing as themselves. Then I take photographs. There’s such play in it.’ All this before the process of painting. ‘It’s a frame within a frame within a frame.’ 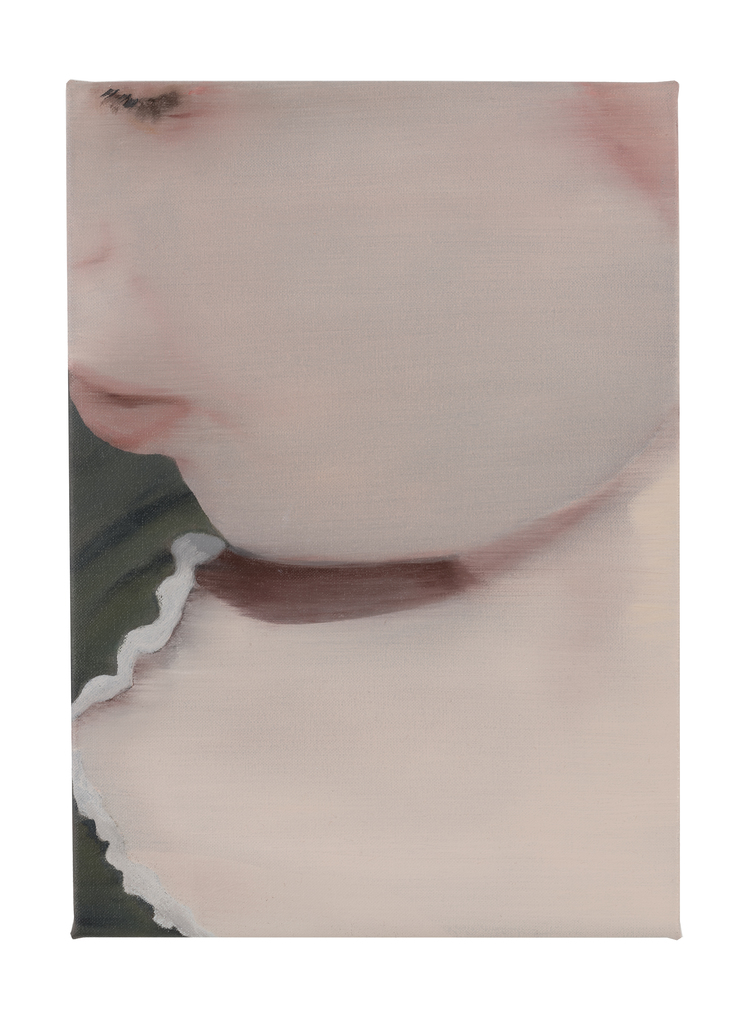 Yes. Lampe’s paintings do have a photographic quality. But with their tight cropping, unusual angles and blurry figures, they look like the rejects on my camera roll. In the hyper-curated world of social media, they are the selfies that didn’t make the cut. ‘I'm highly interested in people like Lady Gaga or Rihanna or Madonna, who are really living Instagram lives. And it's all about perfectionism’, says Lampe, whose 2019 Paris exhibition was titled Instadentity. Perfect is far less interesting to the artist than ‘the raw side of yourself’, vulnerability – even ugliness. 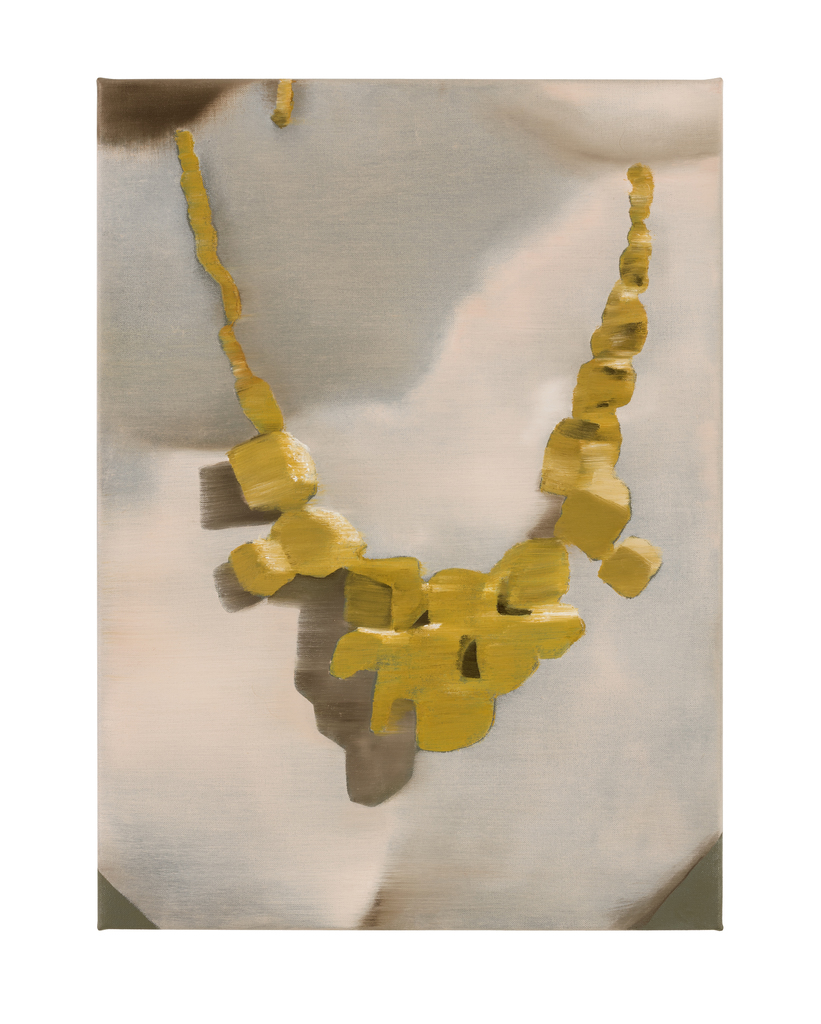 On the other hand, with patterned fabrics and/or jewellery, in every frame at Workplace, the overall effect is not ugliness but ornamentation. ‘I think the jewellery and fabrics serve to distract the viewer from the impulse to look immediately at the faces,’ Lampe says. Trading pearl for gold hoops, it’s all very Vermeer: while the most famous earring in art history has been described as an illusion due to having ‘no contour and also no hook to hang it from the girl’s ear’, Lampe would say that not only is the paint illusory, so too are the ways that we dress and the signals we send to each other with our embellishments and style – ‘because it's all a big trick – how we connect to each other.’ 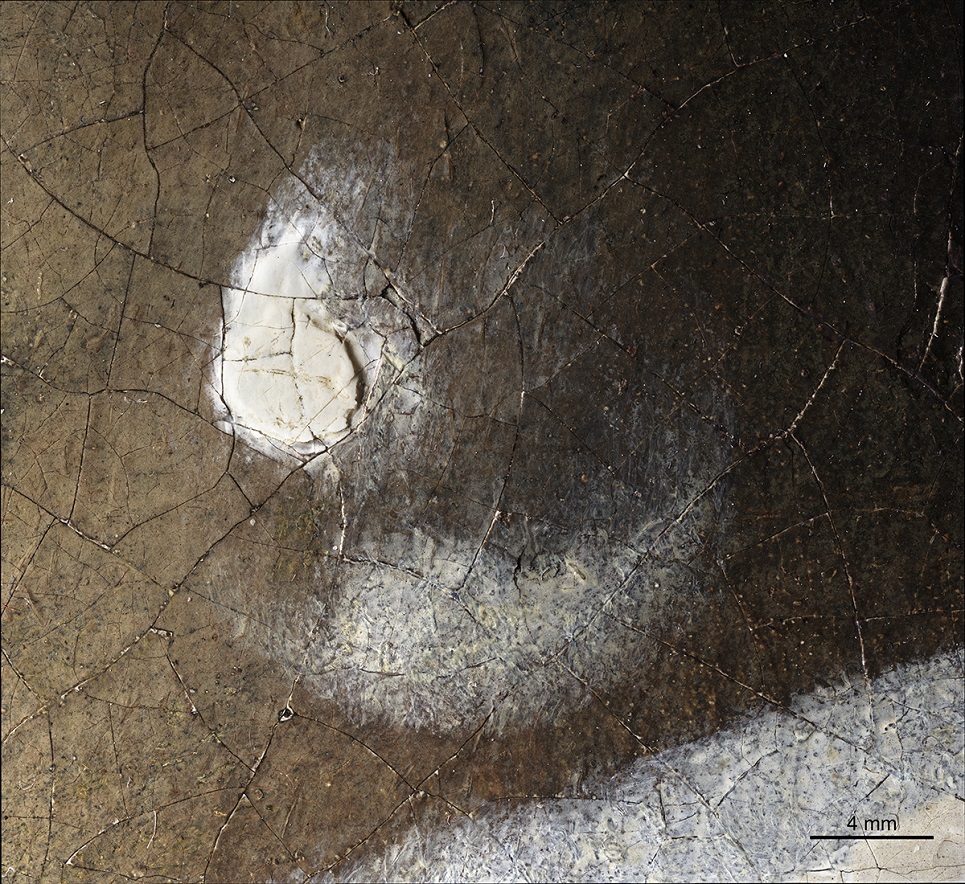 The pearl in Vermeer’s Girl with a Pearl Earring at 140-times magnification. Photo by Hirox Europe, Jyfel. Source: Artnet

The slippery relationship between artist, sitter and signs is further explored in Lampe’s exhibition title Anima Mundi, referring to the classical belief in an intrinsic connection between all living beings. You could say the same for inanimate possessions: ‘These objects have a soul, we give rings to each other when we marry to say, I will always be with you. With the birth of a child, you gift jewellery. We all add content to things.’

"it's all a big trick – how we connect to each other" 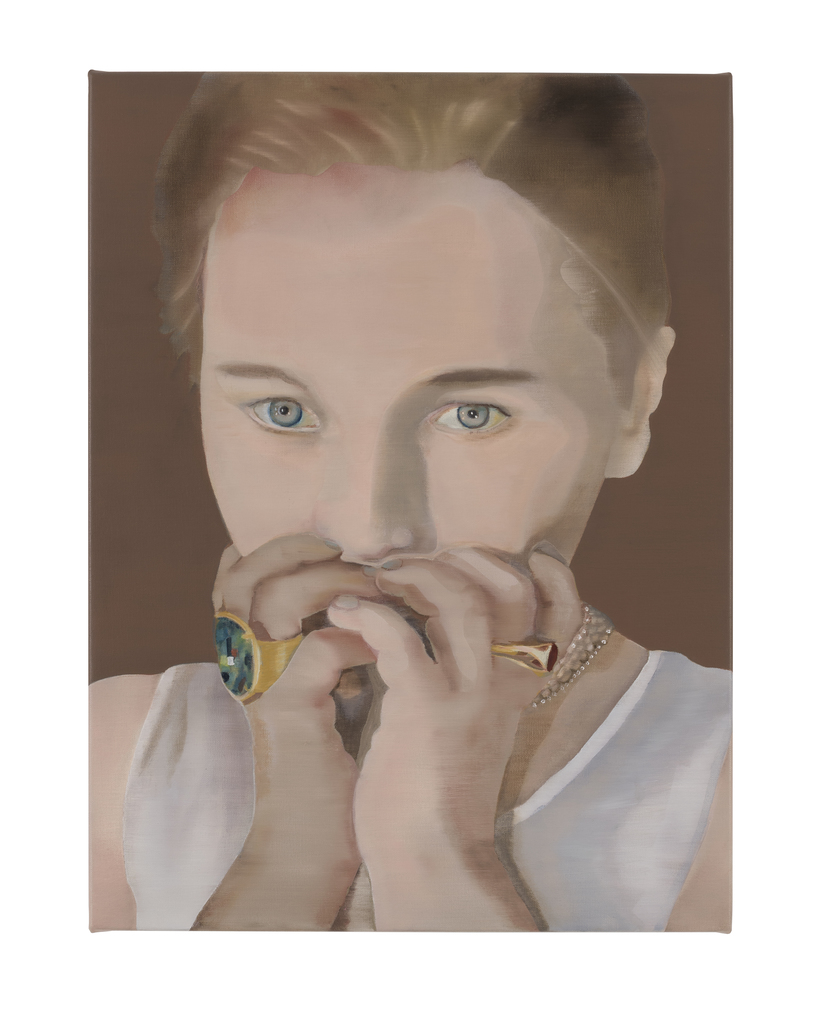 This is why the sitter is so important. Lampe describes sometimes beginning with an Old Master painting, dressing up her models in the correct clothes and setting the scene (she used candlelight for the chiaroscuro effect in this series) to create a facsimile of her source material; but ‘the models have to transform it.’ Meanwhile, she goes to great pains to remove herself from the process. Towards the end of a painting, the artist takes a big brush and moves it left to right to remove any ‘any virtuous brushstrokes’, anything that might ‘point to me as a virtuosic genius’. As a consequence, the surface of her paintings is disarmingly flat. Her figures blurred as if in motion. 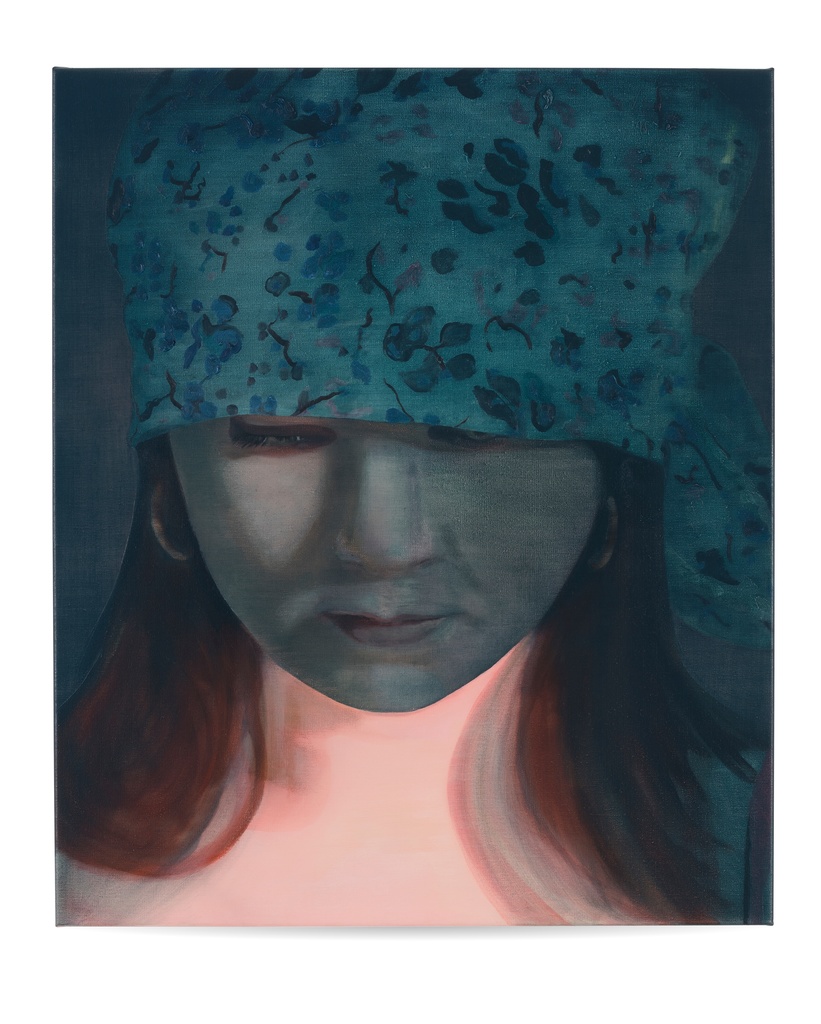 Going hand in hand with this avoidance of any personal narrative is the pragmatism of her titles: a sequence of numbers suggestive of a barcode, which is generated by taking the size of the frame, the year painted and adding a random digit at the end. Lampe would prefer to give the viewer space to name the work in whichever way she sees fit. 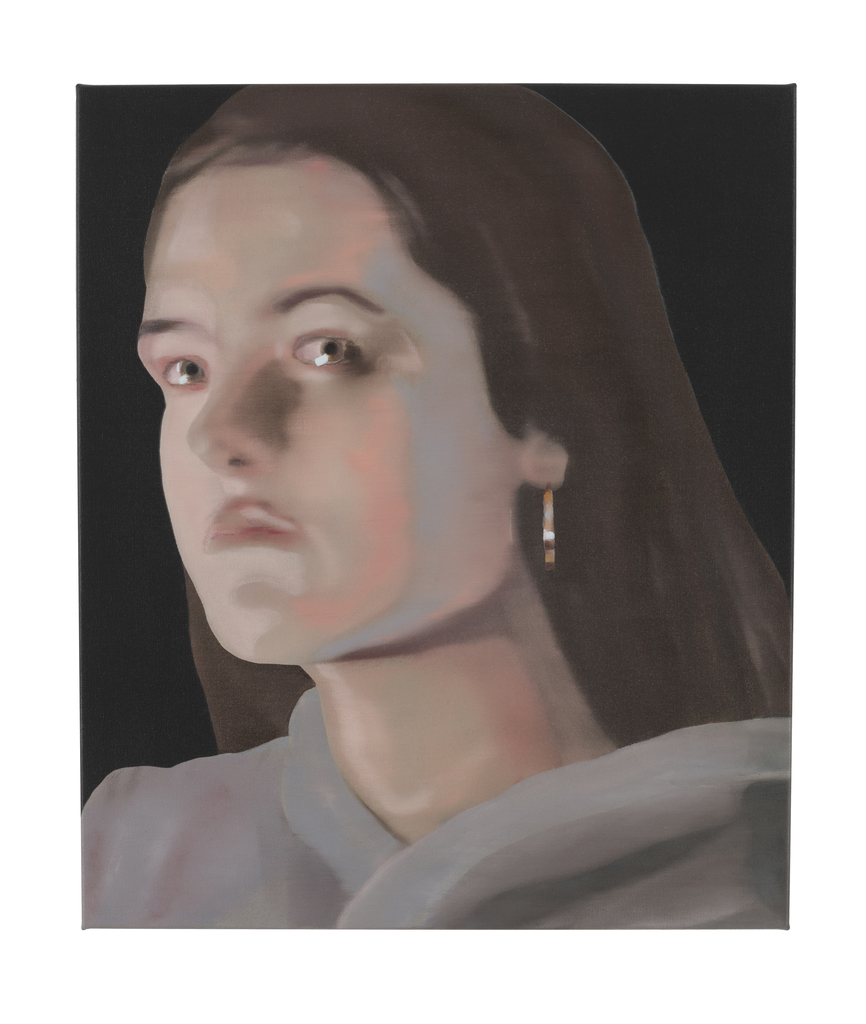 ‘No, nothing is nameable’, writes Samuel Beckett (also not a huge fan of narrative) ‘tell, no, nothing can be told, what then, I don’t know, I shouldn’t have begun.’ While working at a Red Cross hospital in Saint-Lô in 1945, he wrote an essay about the ruins of the town, ‘bombed out of existence in one night’, and described ‘this universe become provisional’. For me, Lampe’s portraits that aren’t portraits – immaculately conceived without the touch of any artist’s hand (but rather by the identifiable roles of anonymous sitters) – also suggest a contemporary world become provisional. Trying and failing to meet the candlelit gaze of ‘5565224’, who looks beyond me, while simultaneously being distracted by the glint of her earring, this portrait seems fit for a society in which people have become increasingly disconnected from themselves, each other and the world around them. 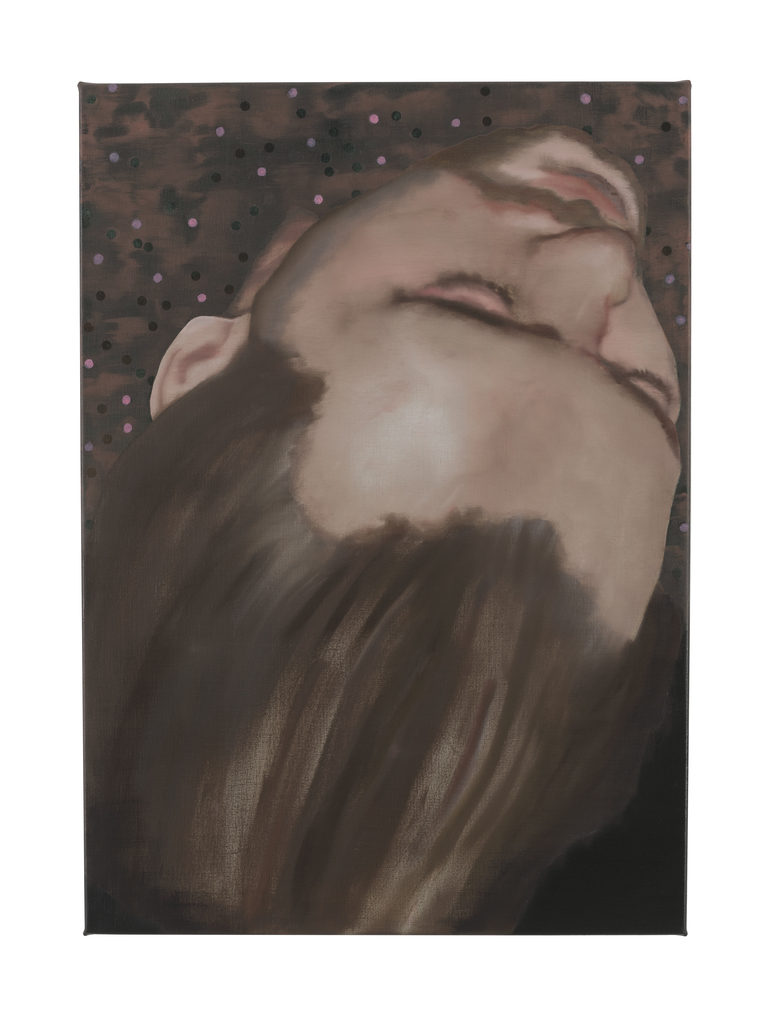 But while Lampe’s anti-portraits interrogate the fragility of human connection, they ultimately invite us to project ourselves into the frame, and by doing so, we participate in the making of one. The artist says, ‘I use the medium of painting – because it’s a really slow process – to get a grip on this world and to get a sort of understanding’. How to get a grip when there are no footholds and things seem so ungraspable? The answer, if there is one, may lie in embracing uncertainty, on our own terms. Here, as in life, there are no final daubs of paint. Only a surface as flat as a blank slate.