Lynette Yiadom-Boakye | Fly in League with the Night

Fly in League with the Night is Lynette Yiadom-Boakye’s first major survey, and it begins with a painting called First (2003), from the artist’s final-year postgraduate show at the Royal Academy Schools. 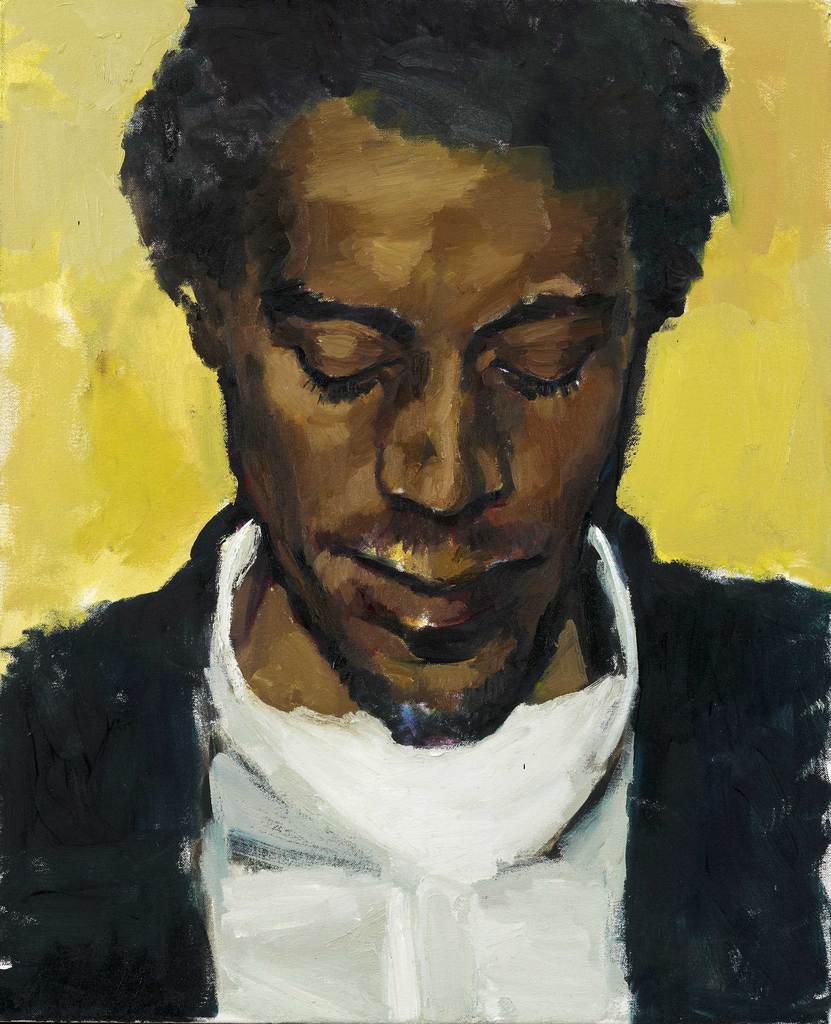 "towards a more subdued, muted, and universal atmosphere, where power is to be found in the act of painting itself"

Yiadom-Boakye paints Black people (‘they’re all black, because… I’m not white’, she’s said, and that’s it.) In First, a man stands in a red robe, hanging open. With a scale larger-than-life, his crotch in jockstrap-style underwear imposes on the viewer at stomach-level. Our subject rests one hand on his bare chest. With the other, he fiddles with the robe’s tie, running the rope between his fingers. His head is surrounded by a halo of red, a glow that venerates him and at the same time relegates him to the seedy underbelly of a red-light district. Horizontal strokes of paint accentuate the leer on his face. 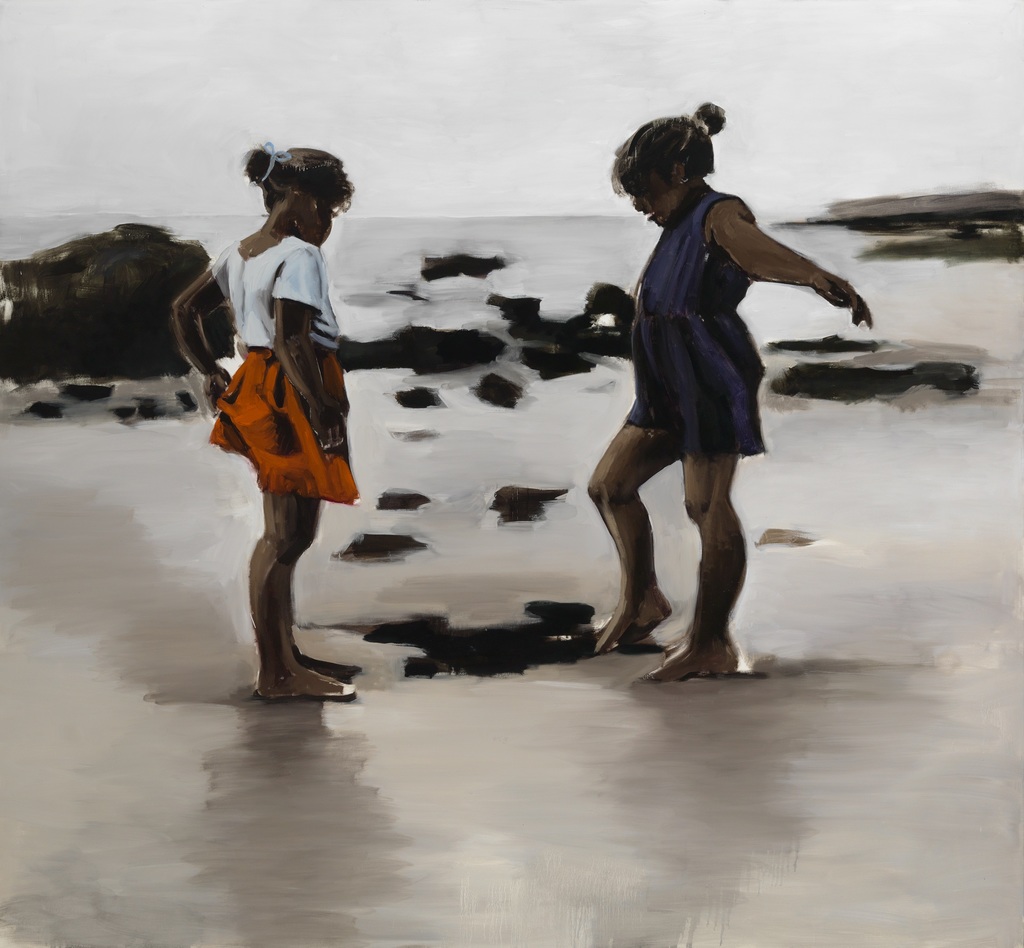 A mixture of humour and horror runs through Yiadom-Boakye’s work of the early aughts. ‘In these works,’ the author Zadie Smith notes, ‘blackness seems to be depicted from the outside and therefore appears — as blackness is often seen, by others — under the sign of monstrosity’. But, by the late 2000s, all traces of the grotesque are gone. 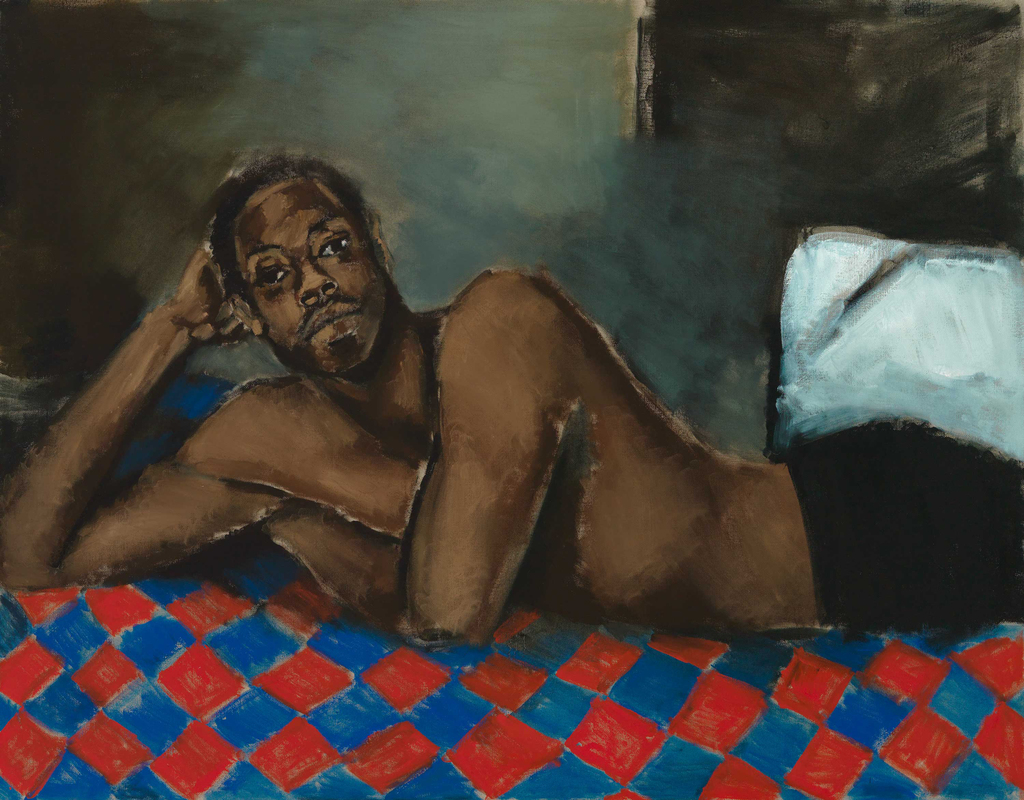 Hanging next to First is another figure in a red robe. Any Number of Preoccupations (2010) shows a man in white slippers, legs casually crossed, the hint of a smile flashing across his face. The man’s gaze is friendly, uncomplicated, inviting you into the espresso browns of his sparse surroundings. If the grotesque in First provokes a feeling of uncomfortable bizarreness in the viewer, Any Number of Preoccupations invokes quite the opposite reaction, a feeling of comfortable commonality. Sharing a wall, these two paintings expose Yiadom-Boakye’s journey as an artist: away from the protest and power dynamics of First, towards a more subdued, muted, and universal atmosphere, where power is to be found in the act of painting itself. 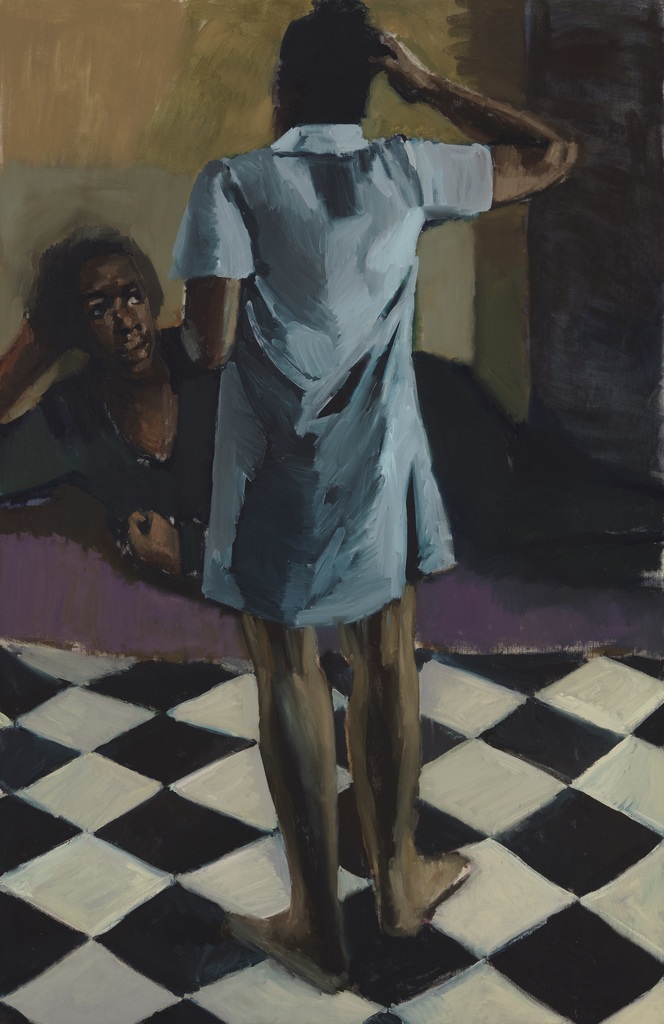 'People are tempted to politicise the fact that I paint Black figures, and the complexity of this is an essential part of the work', Lynette Yiadom-Boakye has said. 'But my starting point is always the language of painting itself and how that relates to the subject matter.' 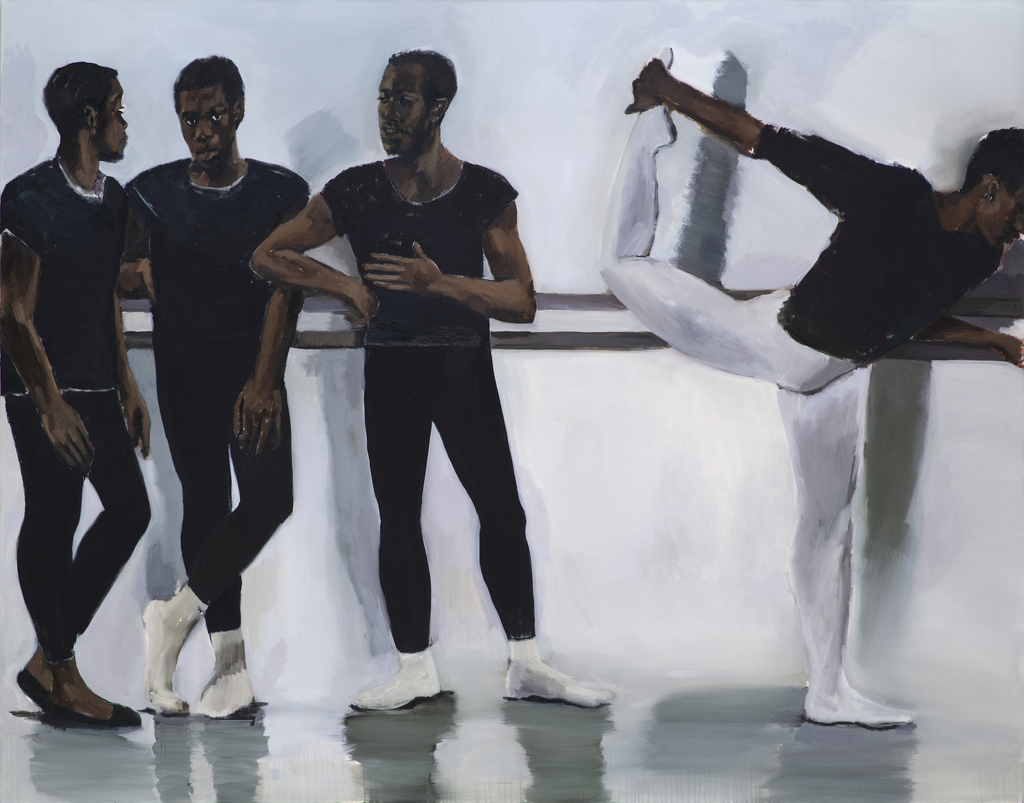 "upon leaving, all the other faces in Tate Britain’s galleries feel overwhelmingly white, all the poses a little stiff"

Certainly, this rings true; it’s less that Fly in League with the Night presents politicised Black figures than that, upon leaving, all the other faces in Tate Britain’s galleries feel overwhelmingly white, all the poses a little stiff. I spot one Black figure in the congregation, and, fittingly, he is also wearing a heavy red cloak: John Simpson’s 1827 portrait of Ira Aldridge, who was a Shakespearean actor around the time of the slave trade. His heroic posture, saintly attire, and philosophical, far-off gaze all speak to the defiance Aldridge displayed in life, taking on a wide variety of roles in the face of extreme racial prejudice. Nick Virk, co-chair of the LGBTQ+ and BAME Networks at Tate, describes this painting as ‘a sudden flash of representation, small and sometimes overwhelmed by other artworks, but significant nonetheless.’ He goes on: ‘It says, you exist’. Despite Simpson’s sympathy and his painting’s significance, it’s the exception that proves the rule of long-lasting marginalisation. 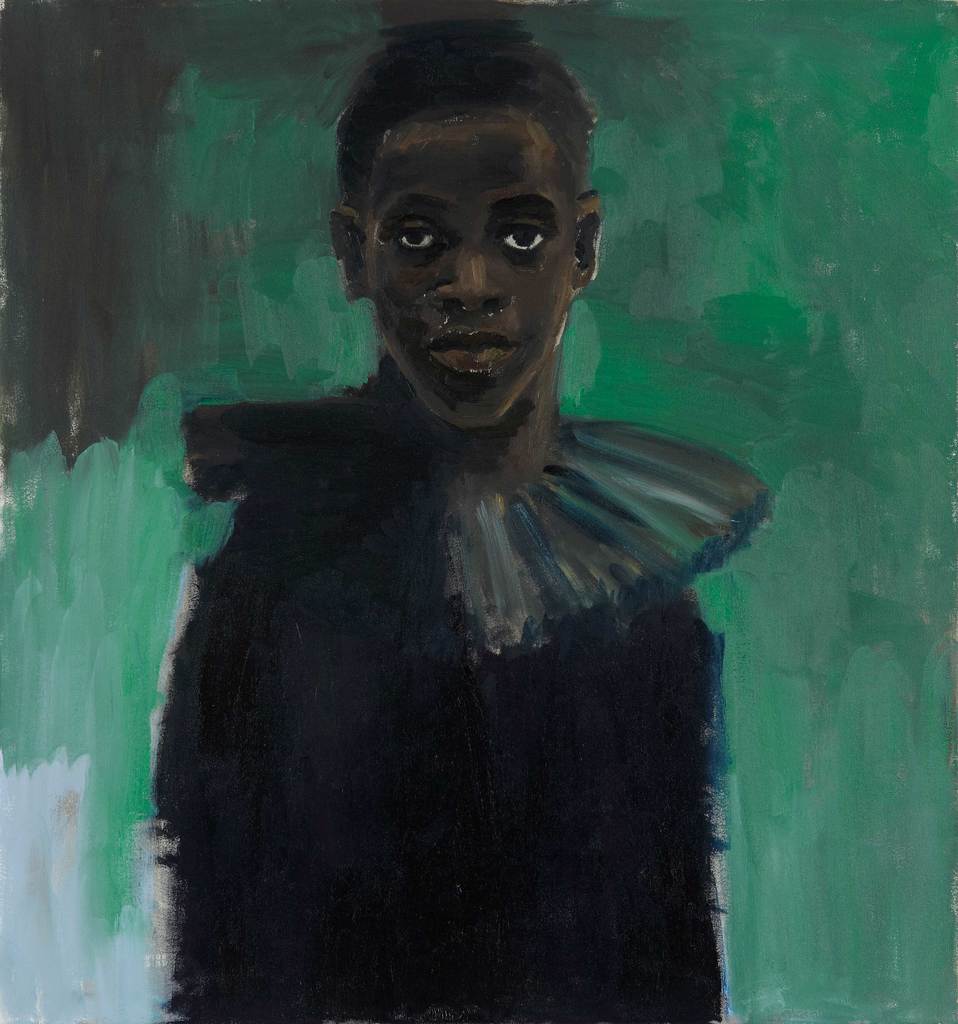 As Antwaun Sargent has said, Yiadom-Boakye’s figures ‘are not interested in the marginalising of themselves.’ Since all the people Yiadom-Boakye paints are drawn from her imagination – magpieing a face from a magazine here, daydreaming a tiled interior there – it would seem strange if these characters were interested in the marginilising of themselves, wouldn’t it? (Imagine imagining someone who you are excluding from your imagination?) Okwui Enwezor calls Yiadom-Boakye’s paintings of embodied unreality ‘para-portraiture’ – and, indeed, they happen in a world just beyond ours, one that is marked by stillness and repose. 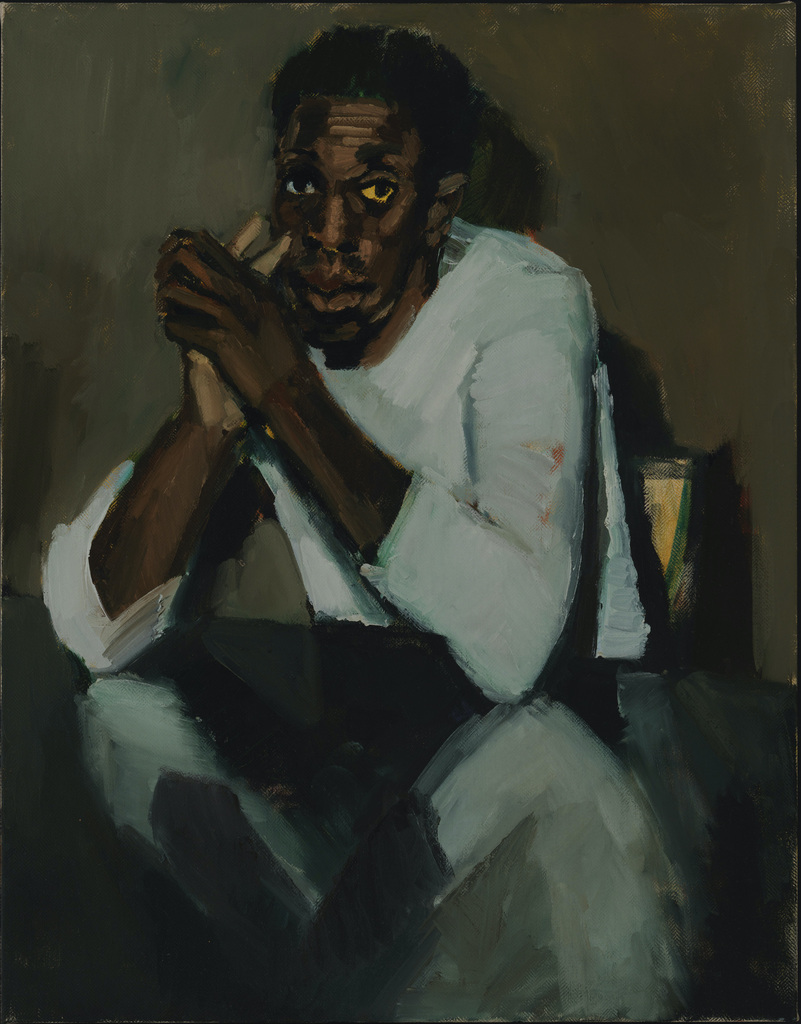 "magpieing a face from a magazine here, daydreaming a tiled interior there"

The Ventricular (2018) presents a man in a red shirt, with his arms splayed over the backs of a plush red sofa, a pink cushion by his side. A patchy burnt orange wall behind him completes this warm chord of colour. Yiadom-Boakye has a satisfyingly loose attention to line – she notoriously paints very quickly, completing most of her works in a single day, relying on instinct as she feels her way around the canvas through expressive brushwork. There is an ease, a sense of sprezzatura or ‘coolness’, here, in style as much as subject matter, loose lines to match the folds of the partially drawn-up sleeves of the sitter’s undone shirt, as he reclines. Yiadom-Boakye’s titles act as final brushstrokes: ‘ventricular’ surely a leap sideways from this study in red to the blood in the heart, in small and secret chambers. This painting has a kind of pulse, both vital in its intuitive conjuring of mood, texture and tone, and yet, at the same time, utterly ordinary, the hush-hush of something always beating inside us all. 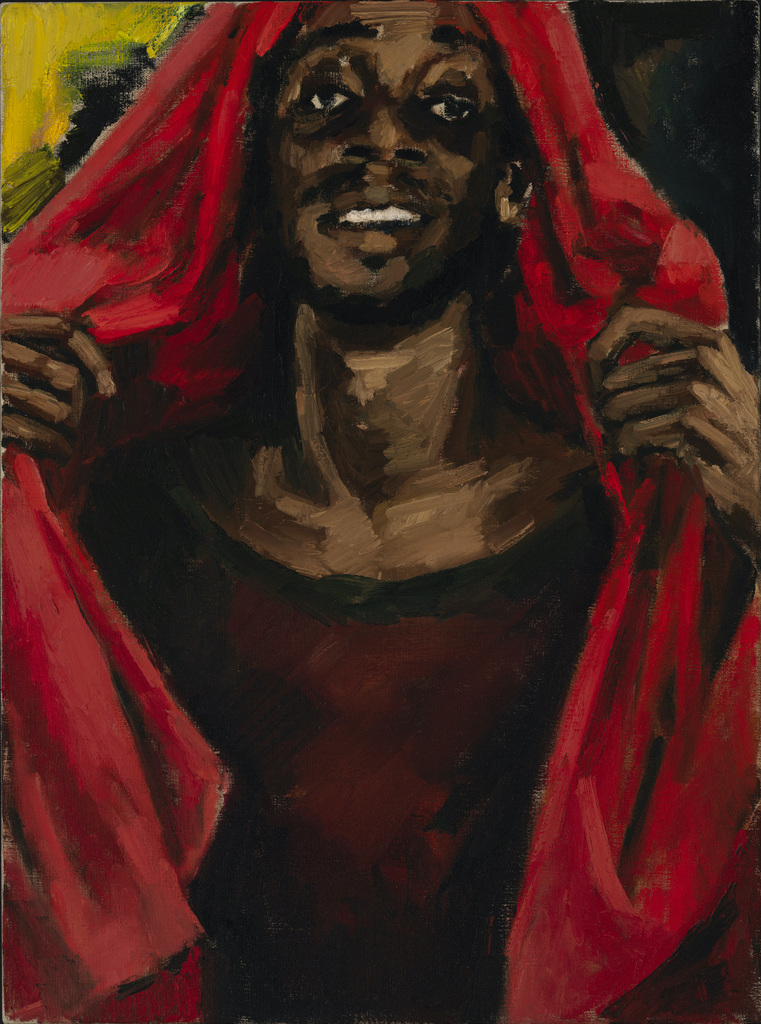 More often than not, Yiadom-Boakye’s portraits show figures in varying states of relaxation, stretching out, kicking back, taking a moment (an online event on Friday 11 December in response to the exhibition by textile and performance artist Enam Gbewonyo and composer and sound artist Liz Gre is billed as ‘an ode to Blackness and repose’.) The only exception here is A Bounty Left Unpaid (2011), in which a young man strides across an undefined, dusky background (a patch of expressionist brown, suggests a horizon line, perhaps a row of houses). Though this might be the exhibition’s highest moment of drama, the way the boy is swinging his arms with loose wrists, his crisp white shirt gleaming against the muted blues of the evening, suggests that, wherever he’s heading, whatever he hopes to achieve, the situation will soon be smoothed over. The pace he sets is just a knot above leisurely. 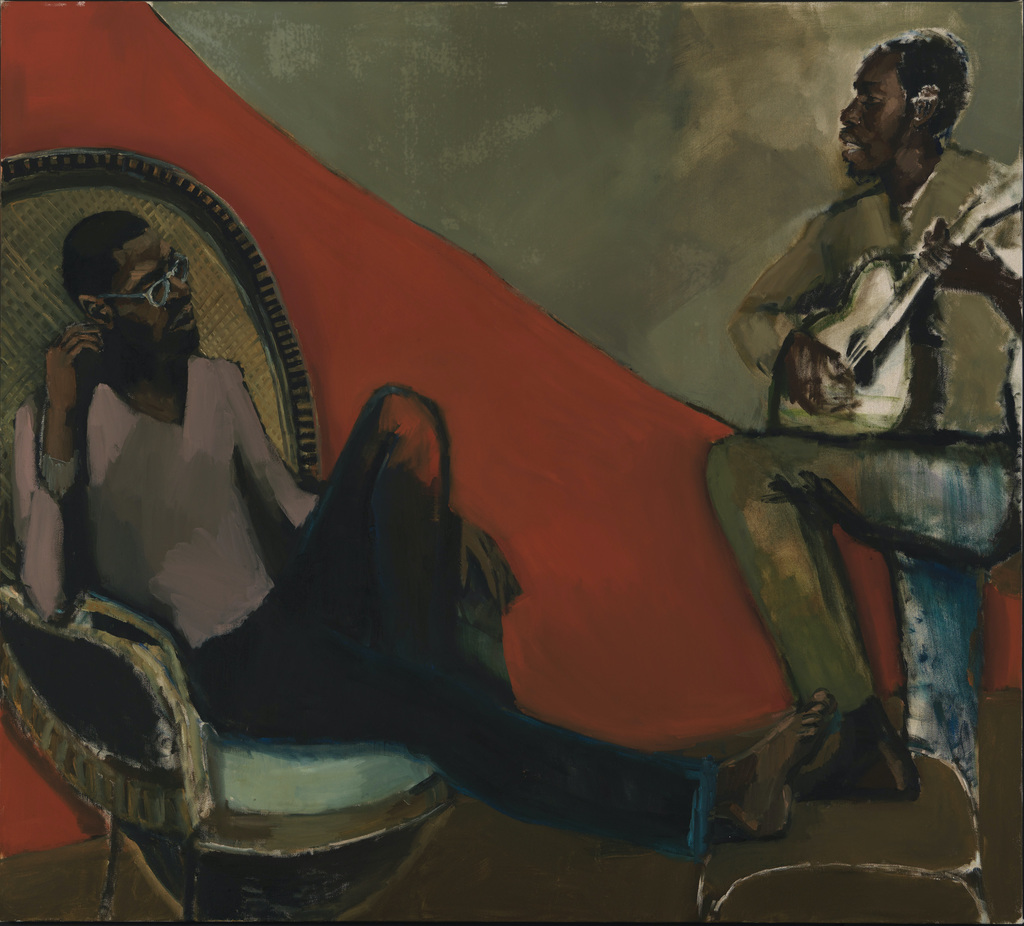 Yiadom-Boakye’s canvases are novelistic, inviting us to imagine what might happen next, what a man is thinking as he quietly averts his gaze, what a woman sees as she trains her binoculars on something far off the canvas. With settings merely hinted at with texture and pattern rather than naturalist detail, the viewer must complete the scene in her head, as she would do when reading. Writing is central to Yiadom-Boakye’s practice (she writes both prose and poetry). She has said, ‘I write about the things I can’t paint and paint the things I can’t write about.’

"Yiadom-Boakye’s canvases are novelistic, inviting us to imagine what might happen next" 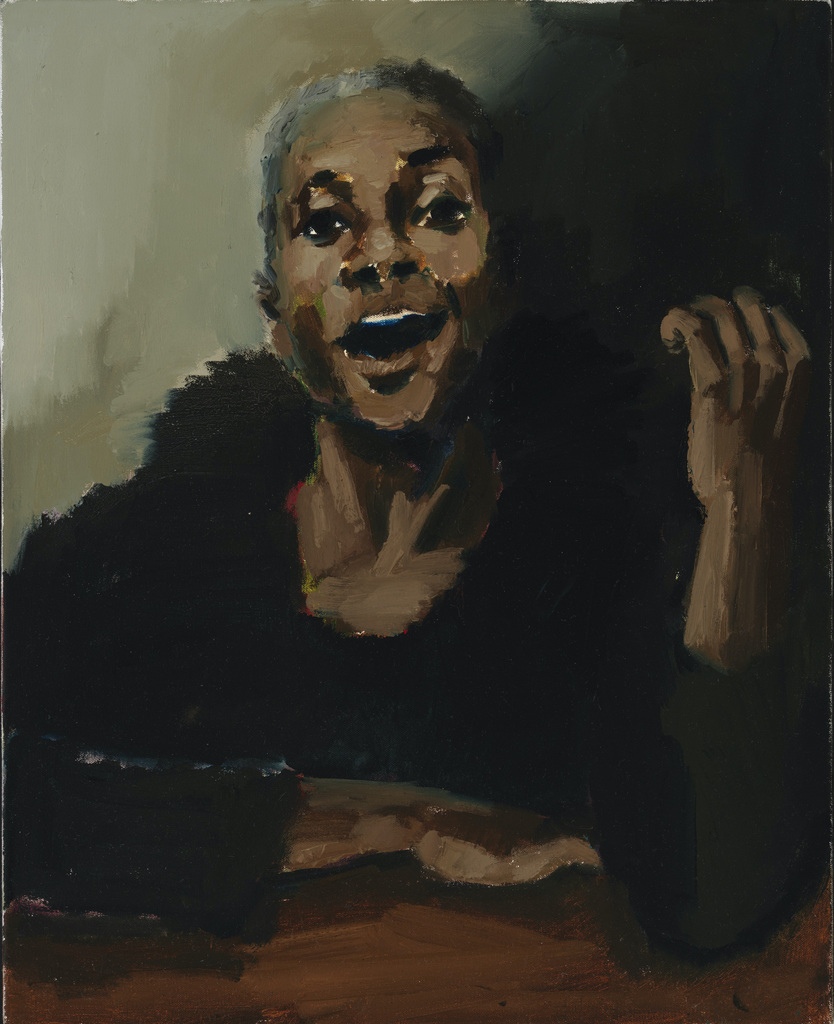 It’s a statement that begs the question, what can be thought or felt differently between the two mediums? Why do some subjects call out for a certain form? Not being fluent in the ‘language of painting’ myself, each of Yiadom-Boakye’s canvases appears as a mysterious new chapter which sees the artist scoping out the answers. To ‘Fly In League With’ Yiadom-Boakye is to settle into a feeling you can’t quite place.