Yang Fudong: Beyond GOD and Evil at Marian Goodman

‘The exhibition’s through there,’ says the receptionist when she catches me hesitating. Through there means through a heavily padlocked gate in a chain-link fence, past two blackout curtains into a dark gallery lit by monitors, flat screens and projections all vying for my attention. Where to look first?

Projected onto which is a rocky outcrop outside a temple, mountains in the distance. Song Dynasty warriors are fighting, campy and balletic, prop swords clacking, swooping through the air on wires that three dudes apiece from the production team are yanking in the background. 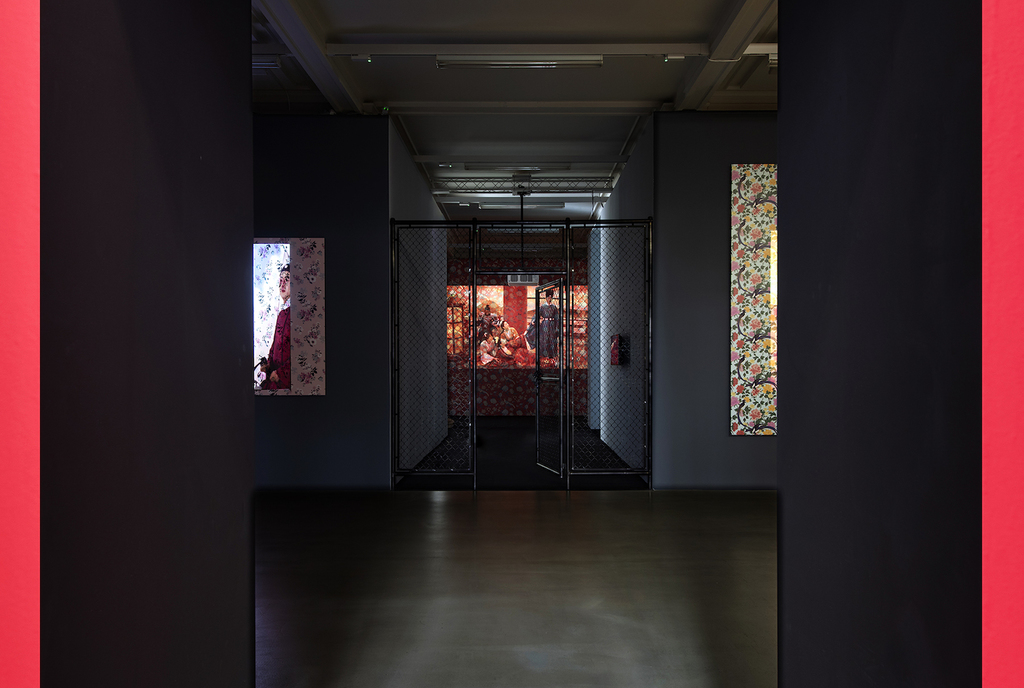 Chinoiserie wallpaper of flowering trees populated by birds. Projected onto which is a rocky outcrop outside a temple, mountains in the distance. Song Dynasty warriors are fighting, campy and balletic, prop swords clacking, swooping through the air on wires that three dudes apiece from the production team are yanking in the background. Onto which projection I project myself: am I the untouchable hero in red walking through the battle, surveying the chaos, or am I the museum-goer in the background in jeans and a t-shirt, watching it all unfold? In which case, am I viewing the work being made, or part of its fabric? 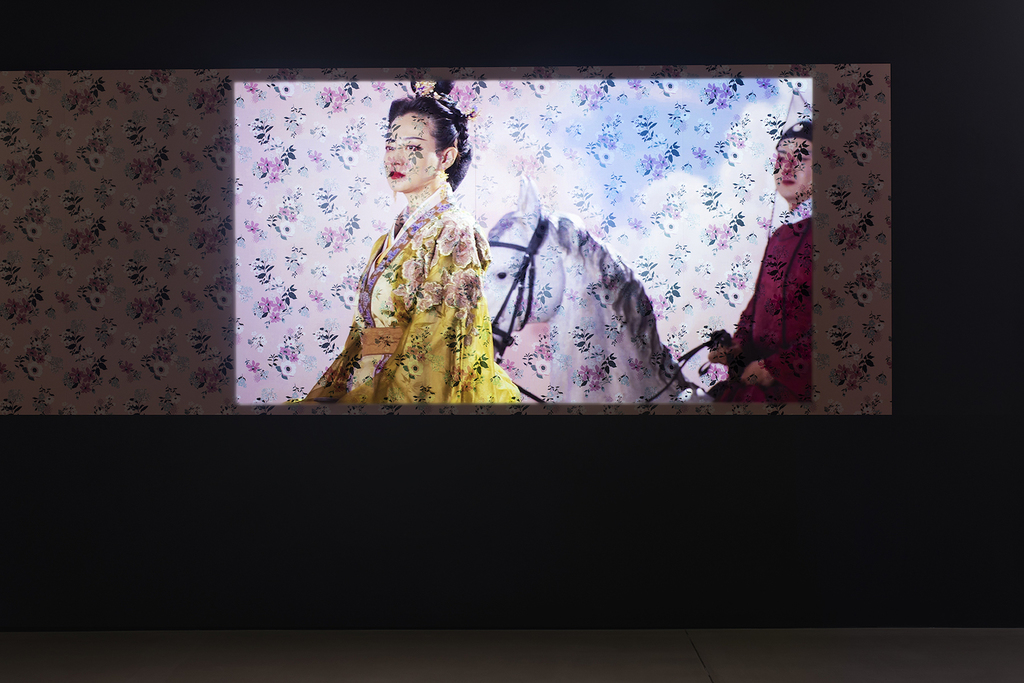 ‘Beyond God and Evil’ is chapter two of Yang Fudong’s larger museum film project Dawn Breaking. For several weeks, Yang conducted a crew of actors and a production team across two main filming locations in Shanghai’s Long Museum, inviting the general public to observe and spontaneously participate in the filming process. What we have here at Marian Goodman are twenty ‘diaries’, arranged in an immersive collage for us to arrange — or even, direct. 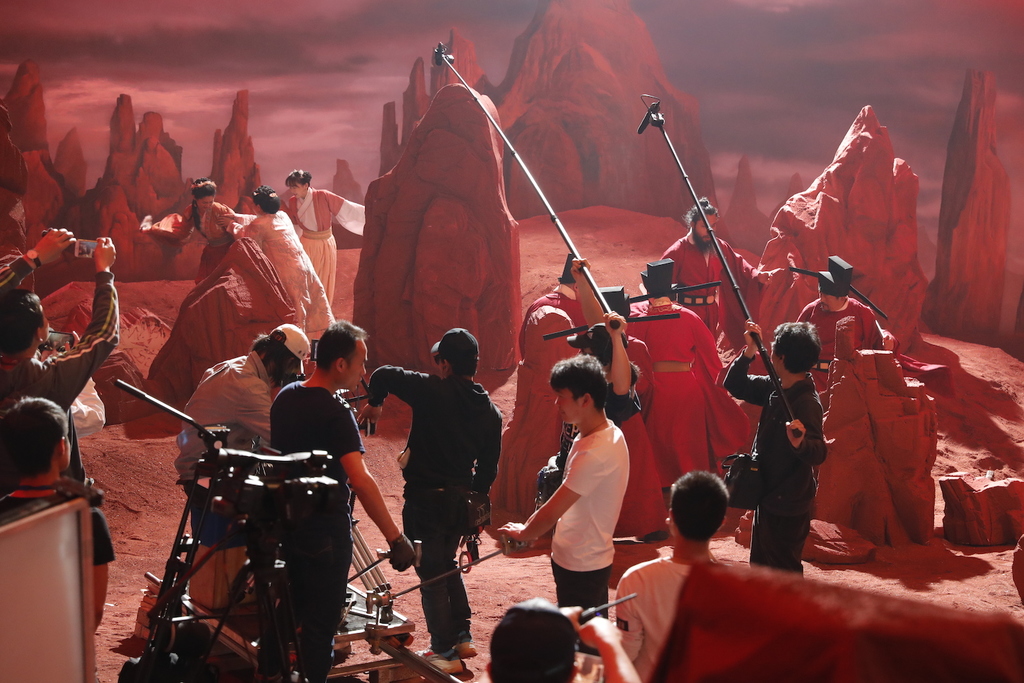 The experience of making sense of the exhibition is, on the one hand, a bit like an archetypal dream: walking past a museum one day, you see an advert explaining that the next day filming begins for a glitzy epic set in Song Dynasty China; then underneath ‘Directed By’ it says your name — but you don’t know how to direct, and you’ve only vaguely heard about the Song Dynasty. You know it’s hierarchical, structured around the emperor who sits like the sun at its centre, but who are these highly choreographed people in white face paint and rouged cheeks, and who are they in relation to one another? The various screens and monitors have the vestiges of narrative, but nothing with a linear logic. Rather they are cut poetically: exquisite, poised and affectless as the wallpaper they appear on. Who is this member of the gentry sitting on a fake horse, wearing red robes and a deeply earnest expression. Can you please stop waving that boom mic in my shot? And get those random people out of the background! 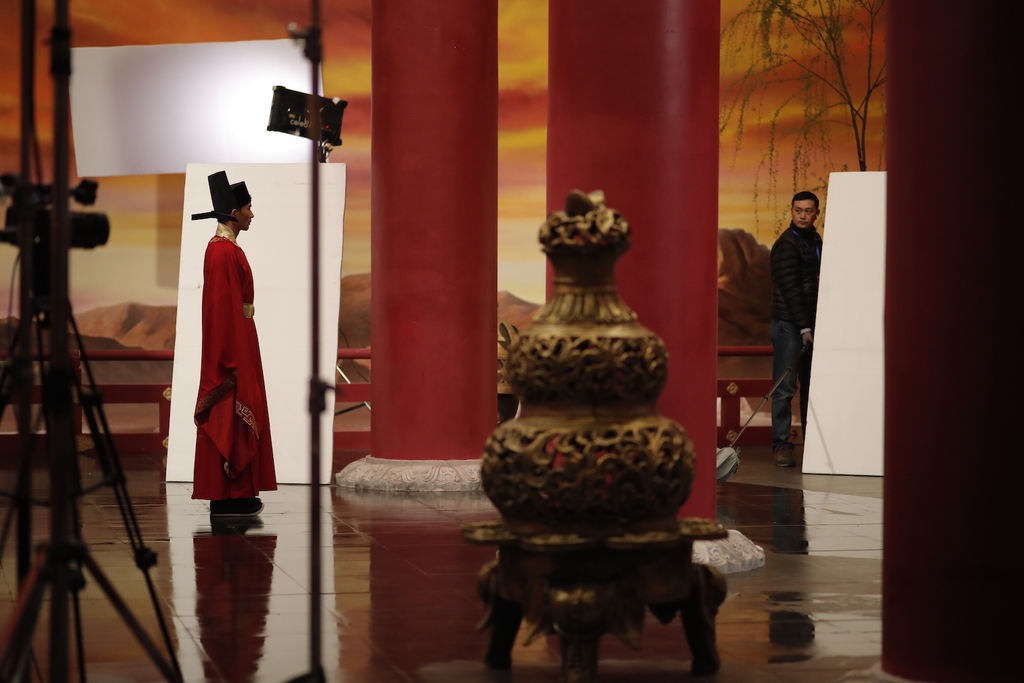 On the other hand, the experience is not like a dream at all, but immediately recognisable: mediation (watching people watch the making of an art work); multiple, simultaneous perspectives; pastiche that complicates past and present; an infatuation with kitsch or minor objects (statues of herons creating a palimpsest with the herons on the wallpaper) — all these strategies will quickly have you feeling schizophrenic à la Frederic Jameson, who characterised postmodernism as ‘an experience of isolated, disconnected, discontinuous material signifiers which fail to link up into a coherent sequence’. I know how to read this stuff like I know how to let the succession of signifiers in a TV ad-break shower across my retina. Problem solved: I am the hero in red, and I am me in the gallery watching the hero in red. I am the protagonist of my life’s epic; I am the extra in the background of someone else’s — some idiot who thought the gallery was closed for refurbishment and couldn’t find the exhibition door. Duh. 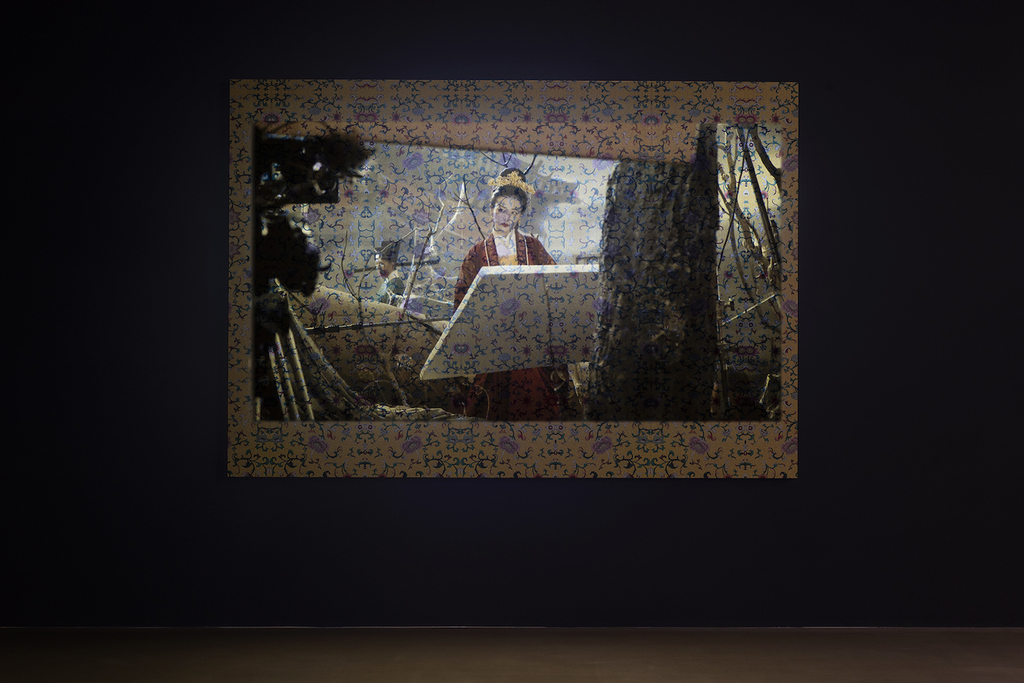 Yang’s Dawn Breaking project will culminate in a third chapter, the completed, edited film, which will follow the decline of a young emperor’s court. But there’s something rich and zeitgeisty about the project in its current state, an expression of the possibility of such a film. We have the imagoes of a wuxia-style epic — a materialistic court culture, a chivalrous warrior, who we know, from cinematic tradition, will fight for righteousness and remove oppressors, according to his own moral code — but with the oppressor yet to be identified we project, in its place, something huge, amorphous and shapeless that is nonetheless worth resisting. I’m not sure, yet, what the Song Dynasty tells us about the present. And I’m not sure what the term ‘postmodernism’ tells us about the present either. But in the ‘Dawn Breaking’ film that I edited in my head, the court was a clear analogue for late capitalism, the hierarchical film-set was a clear analogue for the court, and after a long night of fighting, the hero, who was me, and the gallery-goer, who was also me, stepped over the bodies into a new day.