‘Fables’ might seem an arch title for works marked by their obscenity and pat moral messages. You won’t find any ‘Slow and steady wins the race’ here. 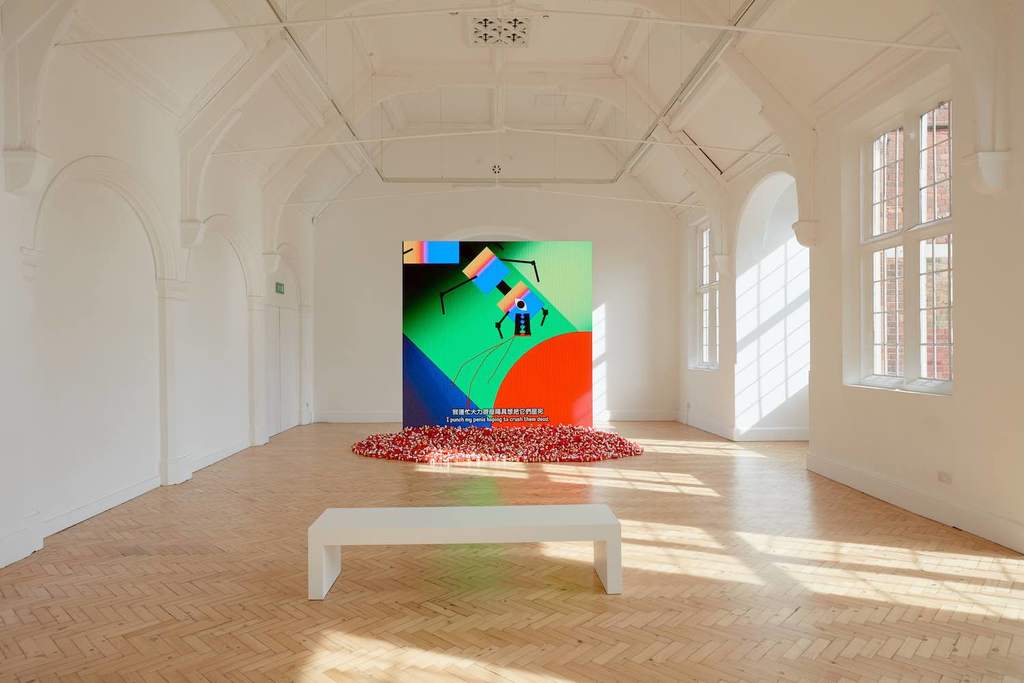 ‘Fables’ might seem an arch title for works marked by their obscenity and pat moral messages. You won’t find any ‘Slow and steady wins the race’ here. Today we’re used to seeing ourselves as the protagonist against an antagonist, but, historically speaking, fables were meant to describe two sides of the same person. We are all of us both the tortoise and the hare. All of us are powerful and impotent. All of us are drawn to light as we are to darkness.

Indeed, the joy of Wong’s animations is the way they combine the light, childlike thrill in surprise for its own sake with the recognition that even our darkest thoughts and dreams are universally shared. Cartoonish and kinetically rigid characters are constructed using bright tonal gradients and simple geometric shapes, while the absurd confessional narration drones on deadpan, as if improvised; the flesh-eating ants crawl into the old man’s penis and he’s taken to hospital…where doctors extract his urine…which his family drink, causing them to develop diabetes and die… and then what? More lovely, execrable surprises. 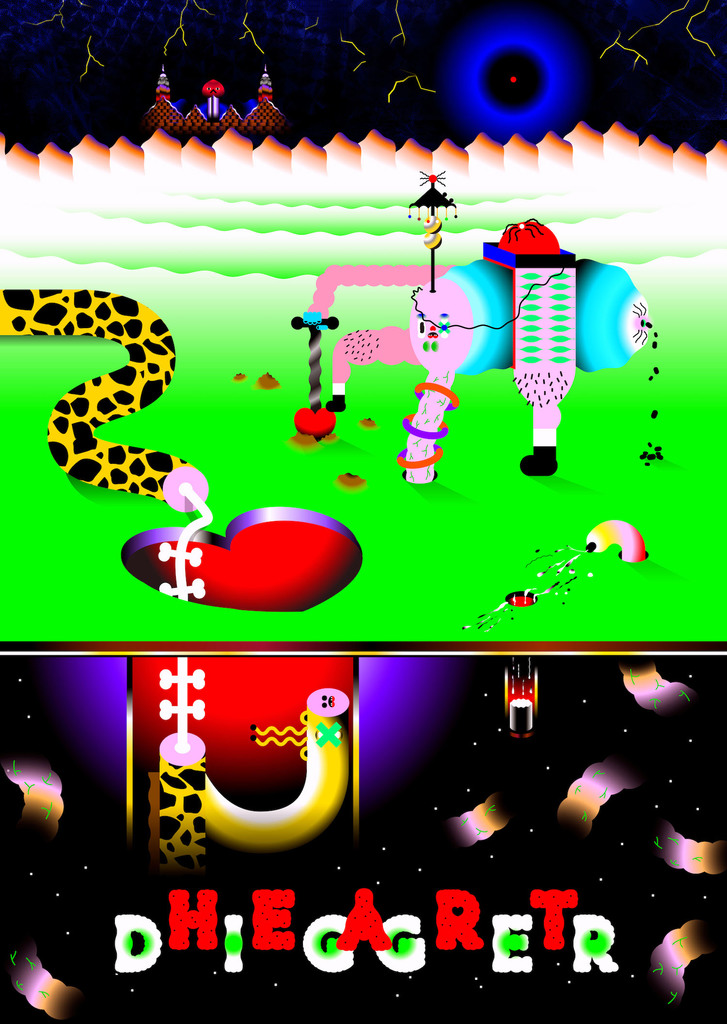 The twisted twists and stomach-turning turns continue in ‘Who’s the Daddy’ (2017), which features a man searching for a potential partner on a dating app similar to Tinder. When he eventually finds a match, he discovers his shameful satisfaction in being subjugated (in ways that will make you avoid the gaze of your fellow gallery-goer upon exit.) On one level, we can trace the collapse of the power/powerlessness binary within the couple’s sexual dynamics. But the excess of violence, grotesquerie and naïveté discourages any reading of the work that is not at face value, the sum of its parts. As a whole then, we read something like a scrambled message eavesdropped in the subconscious. A message that begins to look and sound like resistance to a larger, unnameable power — perhaps a response to systems like dating apps or widely circulated and easily accessible pornography, both of which fly the banner for unrestricted freedom and sexual liberation, but are also drivers of atomisation. It’s the kind of message you might bark at the impasse of culture and base, human instinct.

The fact that at first Wong’s works seem to have no redeeming social value is, paradoxically, what makes them valuable, as well as very entertaining. They are as pointless and playful as a teenage boy drawing a cock on a white tile in a toilet cubicle. On that note, Wong has gone one bigger (size matters) at Camden Arts Centre, with a shaft going through the reading room ceiling and protruding through the roof, capped off with an inverted heartshape. I’m sure Freudians would have not only a field day but a three-day festival here. The headlining psychoanalyst would remind us that, besides the obvious associations with swords, spears and arrows, the phallus metaphor is about who has the power, who has the answer. What is the man doing when he defaces that bathroom tile (or piercing that Victorian building) if he’s not, in some sense, asserting power and simultaneously signing its opposite: fear of impotence?

In the face of tragedy, under threat from a massive power, sometimes absurdity is the only logical response. 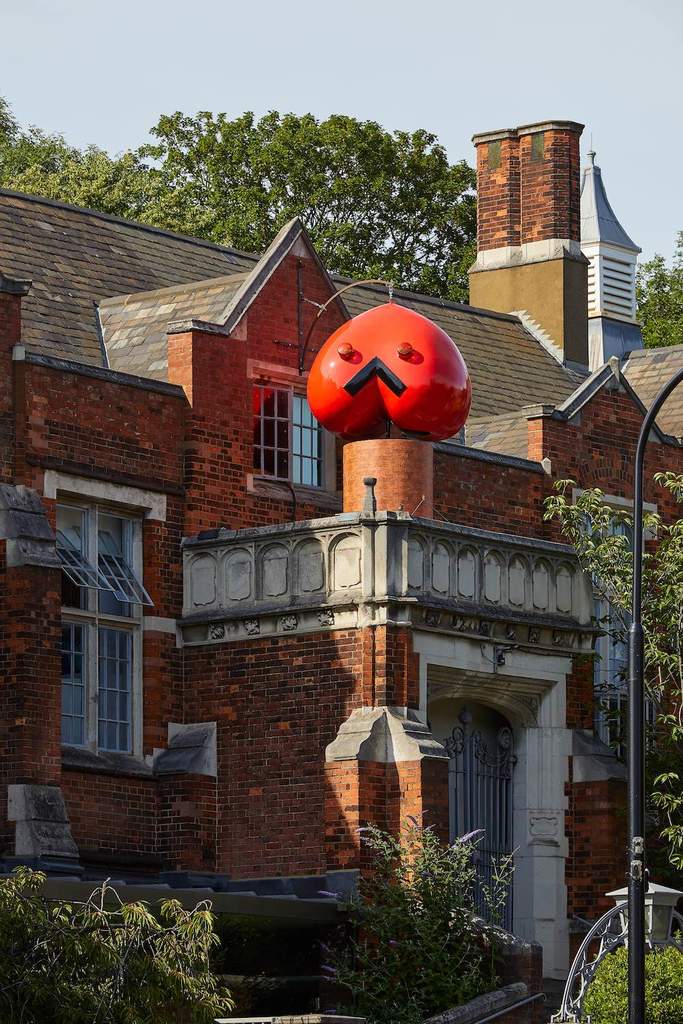 While the satirical effect of the Cantonese artist’s work is produced by its very aimlessness, not directed at anything in particular, there’s a lot going on in Hong Kong right now that would make you feel pretty powerless. On July 1, protestors stormed and vandalised the parliament building. Millions have taken to the streets since June to protest plans that would allow extradition from Hong Kong to mainland China. Of course, there’s a great deal of historical context: Hong Kong was an outpost for the British Empire for 156 years and the city was handed back in 1997, under the so-called ‘one country, two systems’ arrangement. For now, Hong Kong still enjoys many freedoms not available in mainland China — but there’s a looming threat. In a region with a growing culture of self-censorship and fear, we might consider why a politically engaged young man is making grotesque, neon animal cartoons and taboo-busting family dramas. Posting them online, for free. It’s a kind of passive resistance, just as Hong Kong’s Umbrella Movement — which emerged during democracy protests in 2014 — was named for the umbrella’s employment as a shield against the police’s use of pepper spray for crowd-dispersal. It’s similar in spirit to the masons who, almost 2,000 years ago, carved a phallus on the Written Rock of Gelt at Hadrian’s Wall as the Romans approached. In the face of tragedy, under threat from a massive power, sometimes absurdity is the only logical response.