The body of a man lies face down under an arch. His hands are palm up and his feet are both twisted to one side. One shoe is missing. Strange red marks puncture his flesh wherever it is exposed. His flesh is ghostly pale and his clothes seem sodden. Even in the supposedly protective space of a gallery, stumbling across Jeremy Millar’s Self-Portrait as a Drowned Man (The Willows) feels close to what I can only imagine stumbling across a dead body does feel like. A chill; goosebumps; a dizziness in the guts. Yet, this isn’t quite right, because what Millar does, by making himself into a hyperrealistic dead doll, is perform a kind of uncanny inversion. Most people who do find dead bodies initially think they must be mannequins, or dolls – our brains are apparently hardwired to resist horrific truths; to instinctively provide a comforting gloss. Yet here, the horror comes in a slap, as what is real and what isn’t is thrown into a tailspin. Indeed, the drowned figure is so hyperrealistic that Millar himself was apparently flung into a kind of derangement upon completing it. Looking at his own corpse, how could he help but experience an abject alienation from his living body? 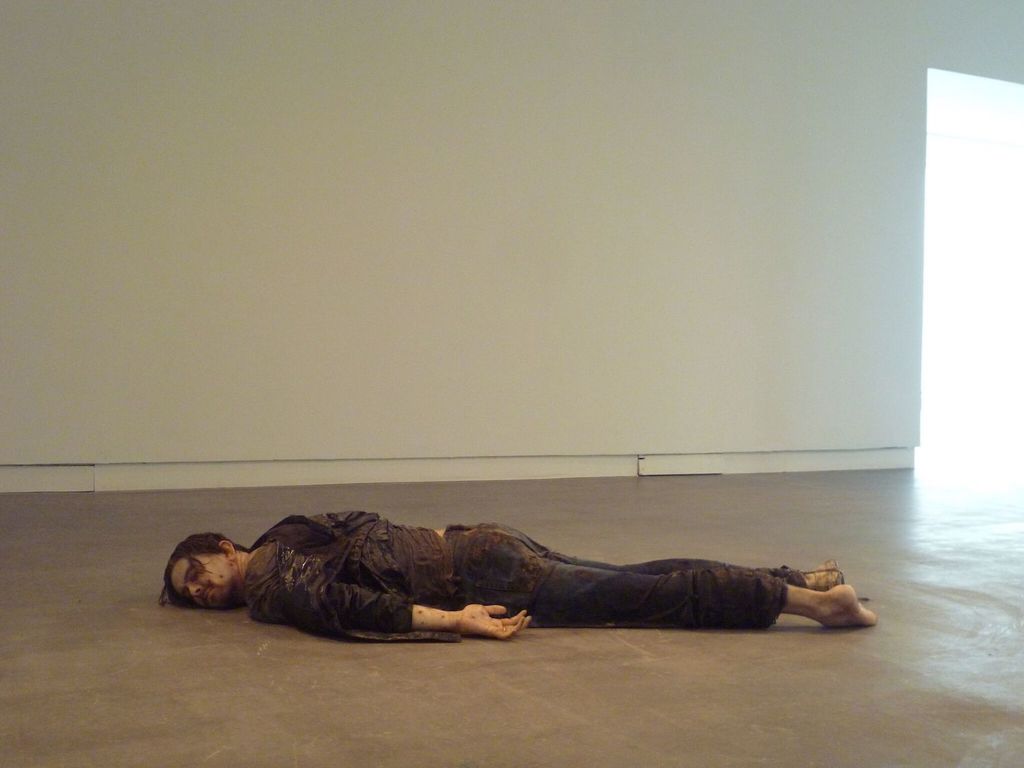 Jeremy Millar, Self Portrait as a Drowned Man (The Willows), 2011. © Jeremy Millar. Courtesy of the artist.

"Waywardness is the only way through, in other words, because it is modern Britain that is the horror show"

Millar’s drowned man surfaces about half way through Somerset House’s bumper winter exhibition The Horror Show! – co-curated by Iain Forsyth, Jane Pollard and Claire Catterall – but it feels emblematic. As that exclamation mark indicates, the exhibition is exclamatory. It wants to shock and shake viewers out of the ordinary; give them a slap of horror that jolts off the comforting gloss we usually apply to everyday reality, as a tonic and balm against its myriad terrors. 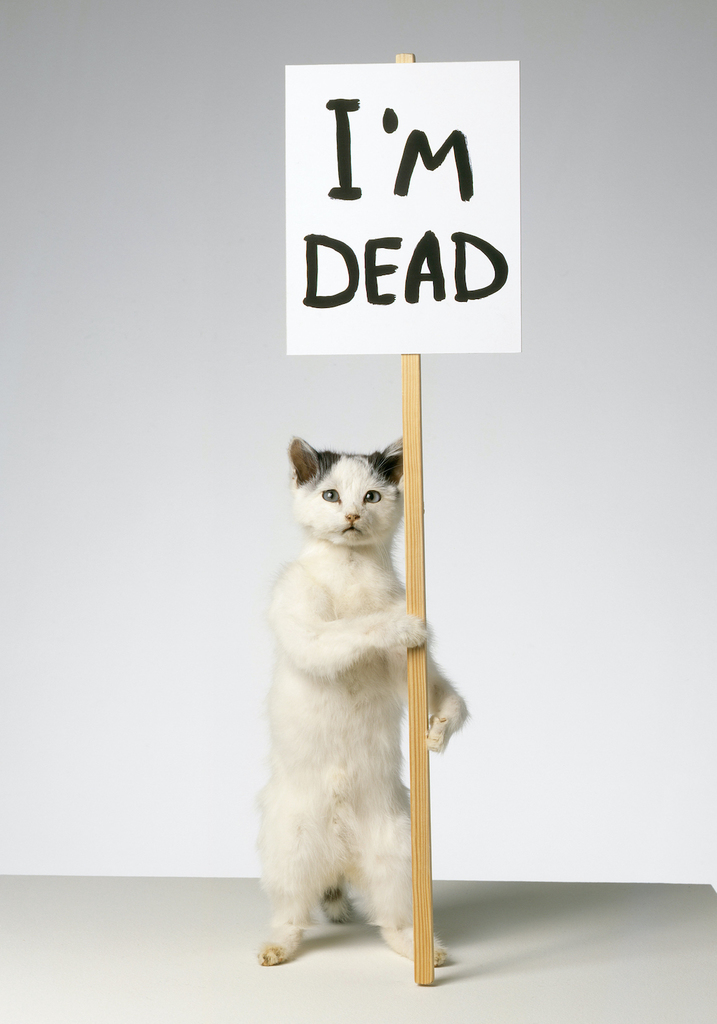 The show is split into three ‘acts’, Monster, Ghost and Witch, with each ‘alchemical archetype’ roughly representing a time period: monster for Maggie Thatcher; ghost for digital glitches; witch for the post-crash world. In its entirety, the exhibition has the feel of a theme park’s haunted house – a winding, maze-like trail, where spooky scenes lurk up spiral staircases and behind curtains. Familiar figures emerge from the darkness: Bowie and Linder and Spitting Image slide into the iconic clubnight Kinky Gerlinky, which slips into Aphex Twin, Mount Vernon Arts Lab, Derek Jarman and Ghostwatch, before spiralling into Juno Calypso, Jesse Darling, Tai Shani and Saint Maud. But, at every turn strangeness also roams. There are grotesque Gargoylesque heads that are, in fact, preserved cakes made by artist Jenkin van Zyl. There is a video of artist Lucy Gunning creeping and crawling around her room – a poltergeist in a red dress – and a video of Anne Bean gargling inky liquid, rubbing it over her teeth and cheeks, waggling a wet, black tongue. A survey of modern British counter-culture, it is a parade of the radical, marginal, errant and wayward. 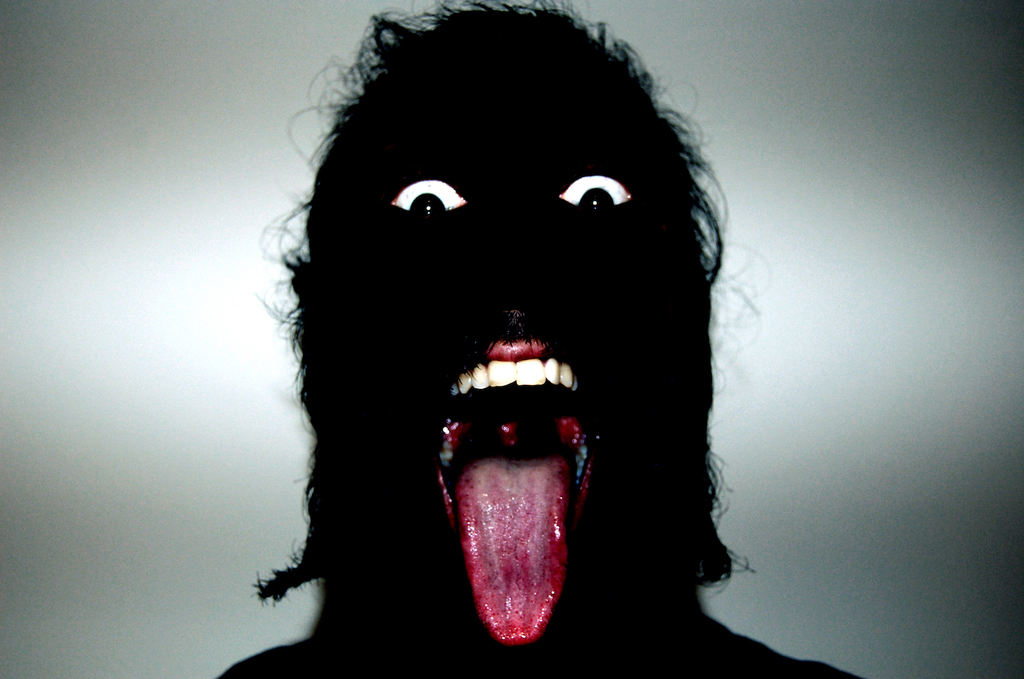 Walking through, I found myself thinking of Kathy Acker, and how, in an essay about Goya, she wrote ‘the only reaction against an unbearable society is equally unbearable nonsense.’ The artists, musicians and filmmakers on display here made and continue to make wayward works of art because the society they found themselves in was, and still is, unbearable. Waywardness is the only way through, in other words, because it is modern Britain that is the horror show. What is real and what is fantasy? Corpse, or doll? 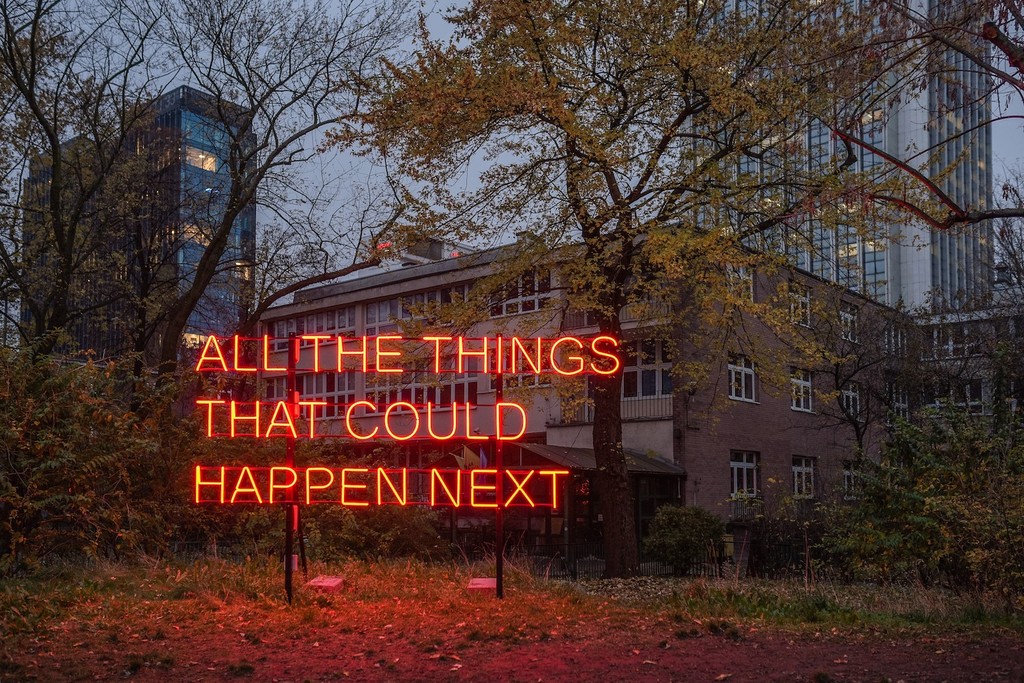 Tim Etchells, All the Things, 2020. Images courtesy of the artist © Paweł Ogrodzki

"a parade of the radical, marginal, errant"

In many ways, the ideas and themes that are gathered in The Horror Show! are not new. Indeed, part of the exhibition’s raison d'etre is precisely the fact that, from the late Seventies onwards, cultural theorists and artists alike have been conceiving the present as a unique site of horror – the contemporary moment one of fantasy, fragmentation and paranoia, in which impossible things happen. ‘We live in a time of monsters’ literary scholar Jeffrey Jerome Cohen writes in 1996. ‘Our contemporary moment,’ Jeffrey Andrew Weinstock suggests in 2013, ‘is a haunted one.’ ‘Horror is the genre of our times,’ Johanna Hedva, author of Sick Woman Theory declares in 2019, ‘because, obviously, our times are horrifying.’ 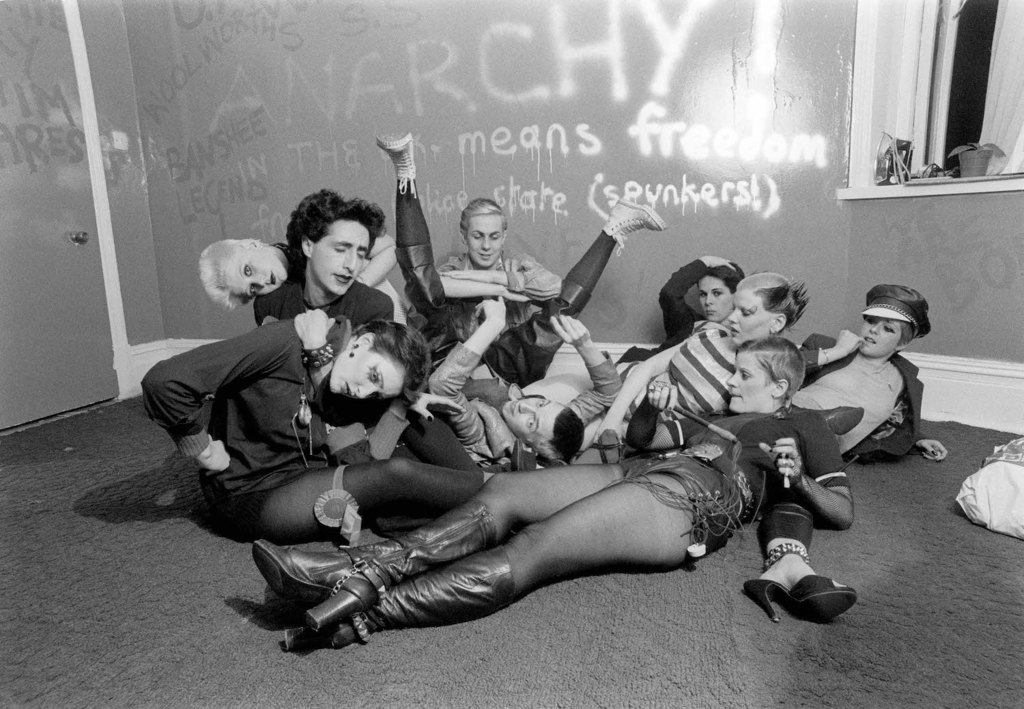 Yet, the critic that has come to stand for this haunted and horrible age more than any other is Mark Fisher. And, in the Ghost section in particular – despite only being tangibly represented by a mixtape he made in 2005 for Laura Grace Ford – Fisher seems like the spectral presence animating the exhibition, his thought leaking through in references to digital technology yielding a period of disembodiment, and to sound being ‘sampled, stretched, reversed and looped’, calling out for us to ‘dance, commune, unite, resist.’ 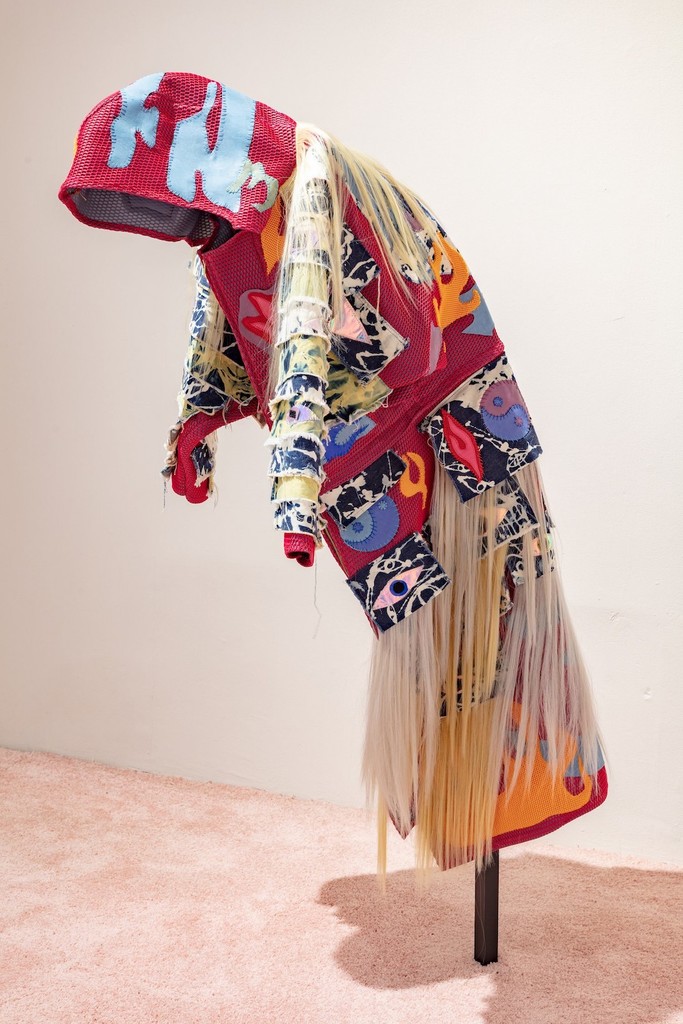 Zadie Xa , Performance costume for ‘Basic Instructions B4 Leaving’ , 2016. Courtesy of the artist

It is this constant call for resistance and for action that stops the exhibition from sliding into safe sentiment, wistful yearning for the past, or the kind of recuperation that domesticates and kills. ‘Don’t be fooled,’ curators Iain Forsyth and Jane Pollard write, ‘The Horror Show! is not a nostalgia trip.’ Indeed, in the show’s final act – which dwells on contemporary culture’s recent and well-documented turn to mysticism and an expansive, embodied and intersectional feminist politics – another work by Linder is displayed, aptly titled The Goddess Who is Permanent as Well as Temporary (2020). The show performs its own loop, in other words, returning to where it began. Yet, as the newness of Linder’s work indicates, this return is also a move forward – not a vicious cycle, suggestive of entrapment and futility, but continuous agitation. 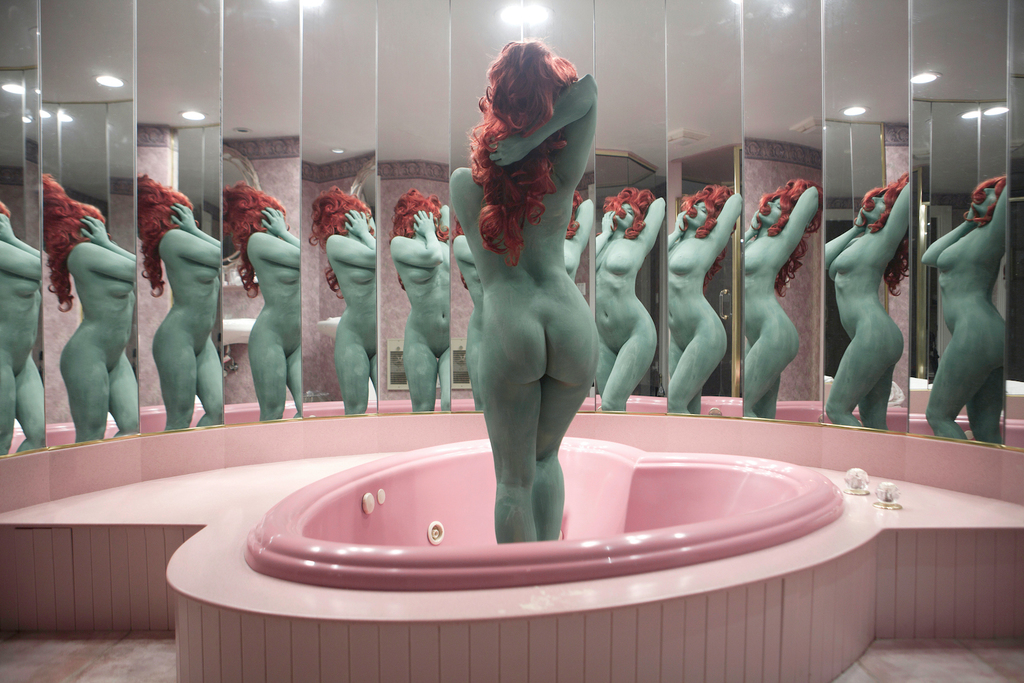 Juno Calypso , A Dream in Green, 2015. © Juno Calypso. Courtesy of the artist

Now, as the exhibition is displayed, imagining the witch as the contemporary moment’s dominant disruptive force already seems outdated – representative of a cultural time period that has shifted under our feet. But, what The Horror Show! ultimately makes clear is that, while evocative, these organising archetypes are not the important thing to focus on, because the monstrous, ghostly and witchy co-exist, shift and persist. What really matters, the exhibition declares, is disruption itself; widening the imagination, prizing open alternative realities. By reincarnating the wayward and unconforming artists of the past, and uniting them with contemporary mystics, witches and transgressives, the show insists that other worlds remain possible – that alternative realities and revolutionary visions will not stay dead or buried, but, like Millar’s drowned body, will slap, shock, persist and remain palpable. Will, in a word, haunt.