Is that your final answer?

One British institution is weathering the Covid-19 storm very well: the pub quiz. From 29 March to 4 April, Google Trends saw a huge spike in traffic related to the phrase ‘pub quiz’ — and related terms, such as ‘virtual pub quiz’ and ‘zoom quiz’ are also breakout searches. Are we simply nostalgic for the pub, or missing the company of teammates? Are we missing weekly structure and familiarity, as much as general knowledge?

‘The pub quiz is a uniquely British invention,’ says a character in ITV’s new drama Quiz. ‘It combines our two great loves: drinking, and being right.’ 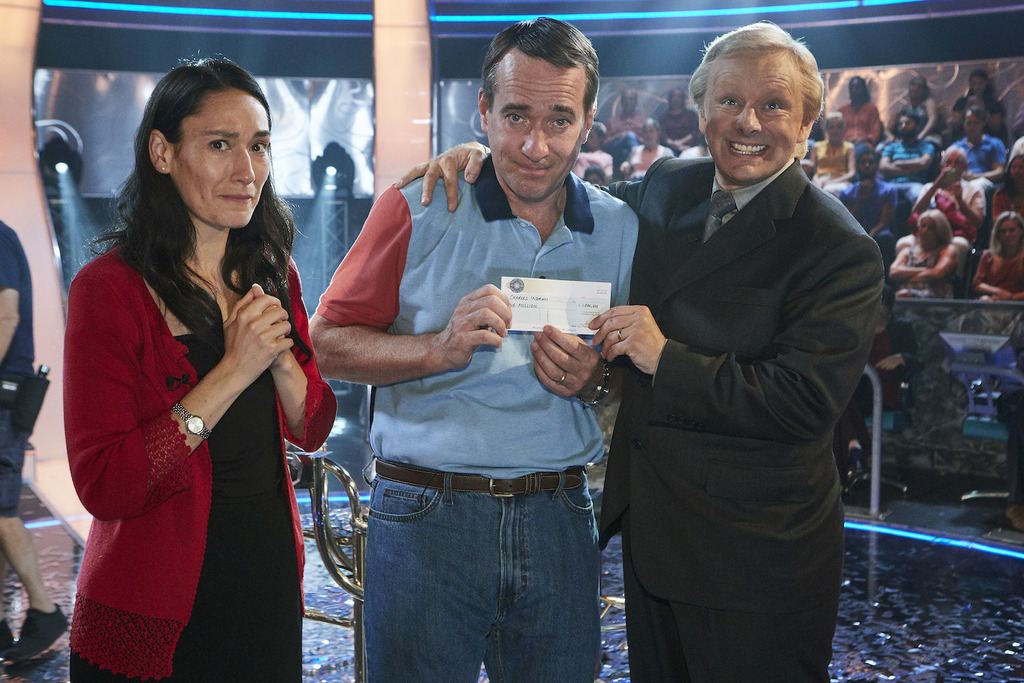 The million-pound question: Matthew Macfadyen and Sian Clifford as Charles and Diana Ingram, with Michael Sheen as Chris Tarrant in Quiz. Image courtesy of Matt Frost and ITV

‘The pub quiz is a uniquely British invention,’ says a character in ITV’s new drama Quiz. ‘It combines our two great loves: drinking, and being right.’ It seems fitting that the mini-series has arrived amidst such hunger for trivia. Adapting James Graham’s 2017 play of the same name, the drama centres around the 2001 Who Wants to Be a Millionaire? ‘coughing major’ scandal.

If there’s one thing British people love more than quizzing, it’s raging against class injustice. Charles and Diana (‘Sounds familiar,' Michael Sheen’s Chris Tarrant quips) are accused of cheating their way to the jackpot with the aid of strategically timed coughs. But part of why this story proved to be such tabloid catnip back in the early 00s is that the couple are so well-to-do. 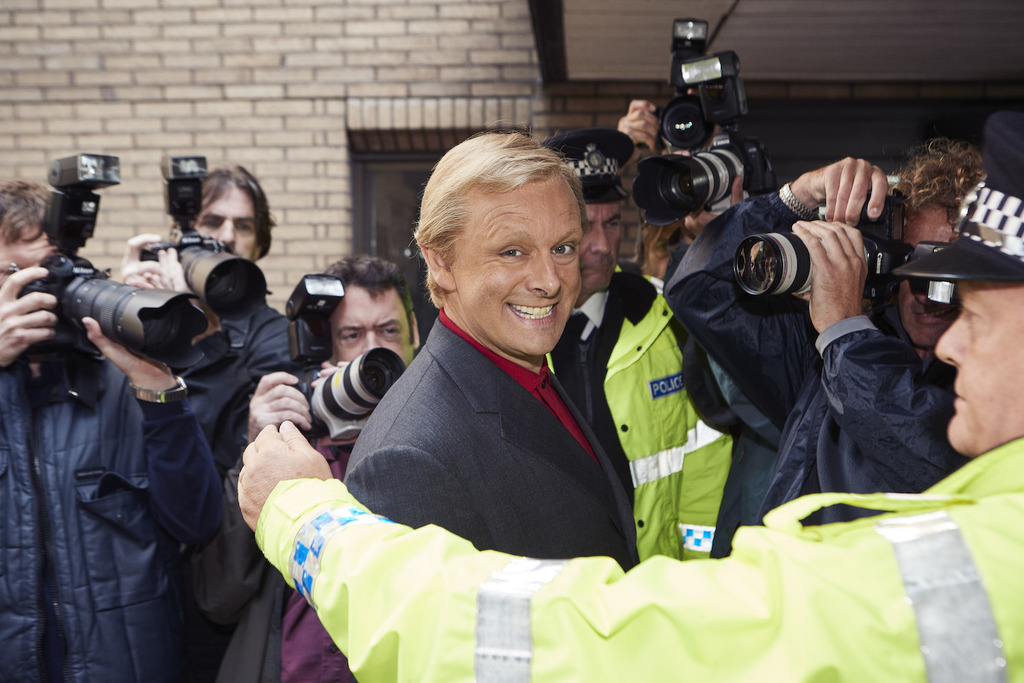 ‘Police?’ asks Diana Ingram in episode two. ‘You’re an army major and I’m a teaching assistant. People like us don’t deal with the police — this is Wiltshire!’ We rail against the idea that this white, upper-middle-class couple have swindled a game show which favours their demographic in the first place. It hardly matters if they’re guilty or innocent: the pleasure — back then, as it is now — is watching the Ingrams get what’s coming to them.

Although WWTBAM? appeared to be democratic — in that anyone who wanted to be on the show could call in on a premium-rate number — it was a system that was more easily accessed and manipulated by white, Middle England. In fact, the showrunners in Quiz repeatedly point out that all the contestants look the same. This isn’t simply a courtroom drama, but an attempt to situate the scandal in its socio-political context.

The emphasis moved from spills and thrills to the palpitating stakes: with the prize money raised to sensational new heights, the show relied on lighting and music to instill a sense of fear and trepidation. 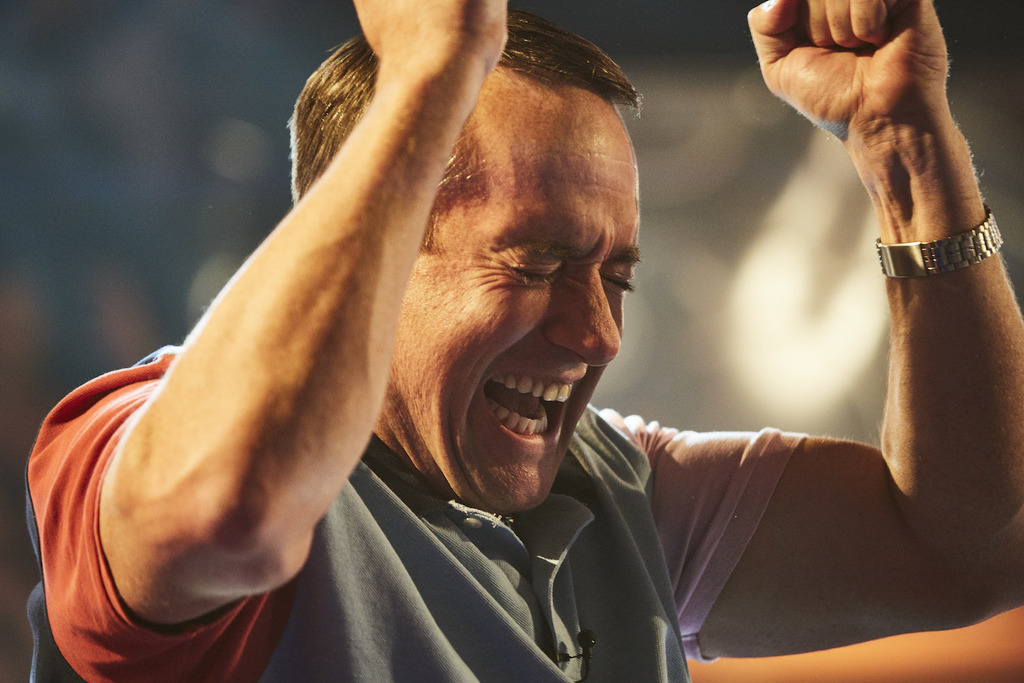 Quiz’s opening episode gives significant airtime to WWTBAM?’s genesis, from pitch to premiere — calling our attention to the phenomenon of the show’s success. Indeed, in its heyday, it drew more than 19 million viewers each night. TV quiz shows in the 90s had come a long way since the genre’s inauguration in the UK, 1938’s Spelling Bee — indeed, so far that WWTBAM?’s strategy was to strip back to bare bones. The contestants sat in austere-looking office chairs. The emphasis moved from spills and thrills to the palpitating stakes: with the prize money raised to sensational new heights, the show relied on lighting and music to instill a sense of fear and trepidation. 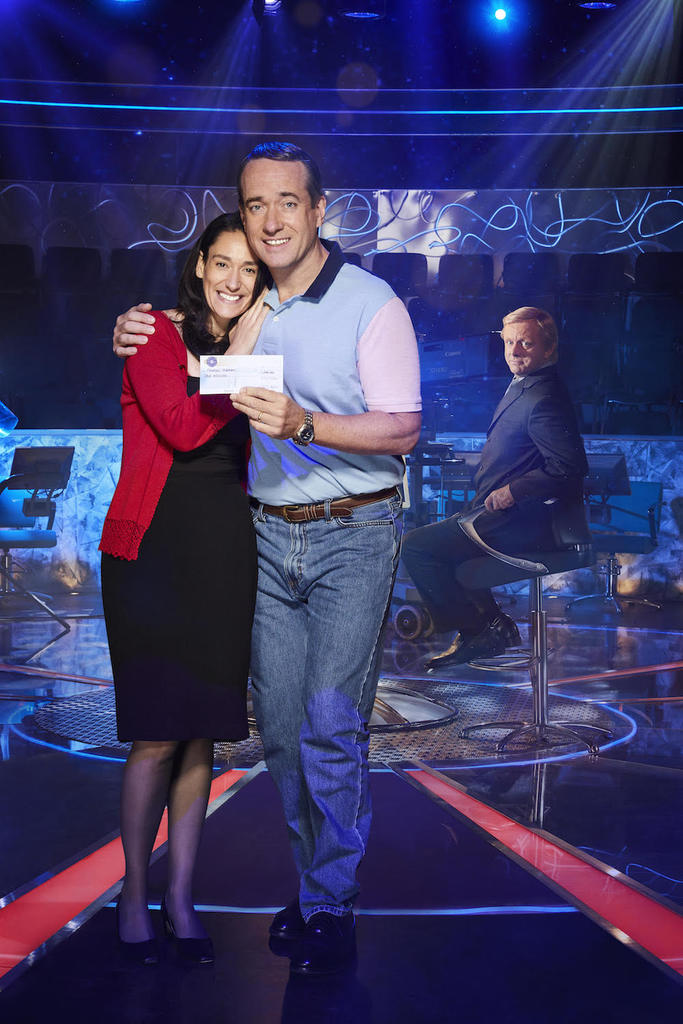 Under such scrutiny, the show starts to look like an analogue for politics. It rehearses Neoliberalism’s favourite fable about social mobility — work hard enough, and you can be rich. With regard to the show’s format moving away from feats of memory to multiple-choice questions, one programmer remarks in Graham’s play, that ‘People want an alternative to facts’ — surely a prognosticating echo of ‘alternative facts’.

Indeed, the third episode sweeps us explicitly into the post-truth era, with Sonia Woodley QC asking the jury to resist ‘entertaining falsehood’ in favour of ‘a less extraordinary truth.’ As if to underscore that entertaining falsehoods are the way things are headed — ideologically speaking — Quiz at one point devolves into a fantasy song and dance sequence, Chris Tarrant donning a Golden Age top hat and cane.

Although WWTBAM? appeared to be democratic — in that anyone who wanted to be on the show could call in on a premium-rate number — it was a system that was more easily accessed and manipulated by white, Middle England. 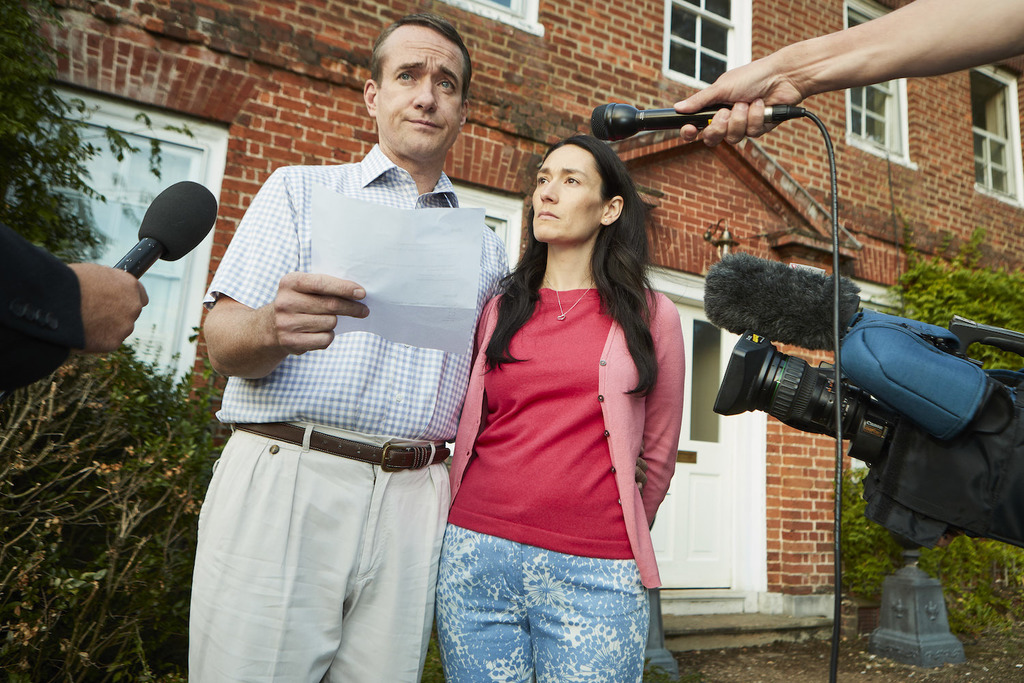 Vilified by the press: Matthew Macfadyen and Sian Clifford as Charles and Diana Ingram. Image courtesy of Matt Frost and ITV

In episode two, the anti-spectacle of the coughing scandal is directly compared to perhaps the greatest spectacle of the 21st century. The TV executives are reviewing footage of the alleged coughing, when one of them changes the channel. News coverage of the September 11 attacks rolls in, quietening the room. At first, it seems a strange event to include in the narrative (but then, how could you leave it out?) However, by episode three, Major Ingram is discussing how populist principles are being used to mediate the War on Terror, both in the UK and in Iraq. In the rising popularity of WWTBAM?, the tabloid sensation of the ’coughing major’, and in foreign policy, Quiz compares the ways populism is used to press particular agendas. 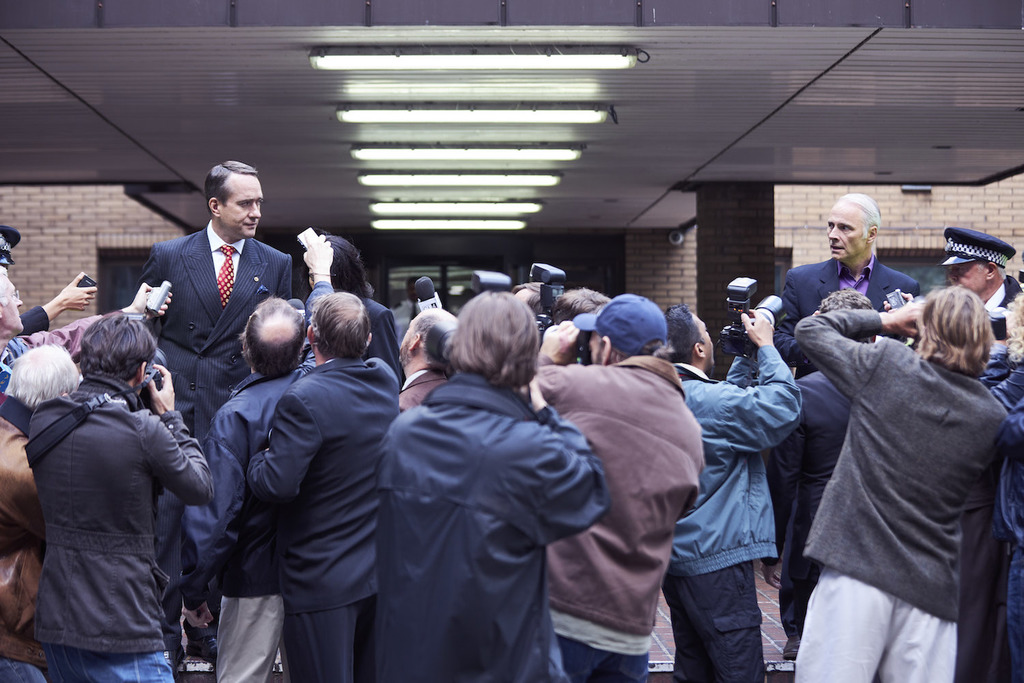 Outside the courtroom: Matthew Macfadyen as Charles Ingram. Image courtesy of Matt Frost and ITV

Populism is a recurring theme of Graham’s. His play Ink examined the way Rupert Murdoch tapped into popular feeling to make The Sun a huge success. Graham’s TV series Brexit: The Uncivil War might have, er, touched on the subject, too. The word itself ‘populist’ appears in episode three of Quiz. Diana Ingram bemoans the fact the WWTBAM? showrunners are biasing the quiz questions toward the category of popular culture — indeed, as an attempt to weed out the likes of them. This sparks a Rocky-style montage of Charles cribbing up on David Hasselhoff and Emmerdale. The sequence feels somewhat crowbarred in, as if Quiz thinks that, for it to be popular, it must be explicit about its message.

On the witness stand, when asked why she is so obsessed with quizzes, Diana reflects, ‘I like the idea that in a world of uncertainties, something can be known.’ The QC, in her summary, implores the jury to be wary of confirmation bias — how we look for reasons to convict the accused, because their guilt is an inherited story; suspicions and accusations ripple out, in the same way a mass hysterical coughing fit seizes the courtroom earlier in the episode. We want to damn the Igrams because the idea of the Ingrams is so inherently damnable. 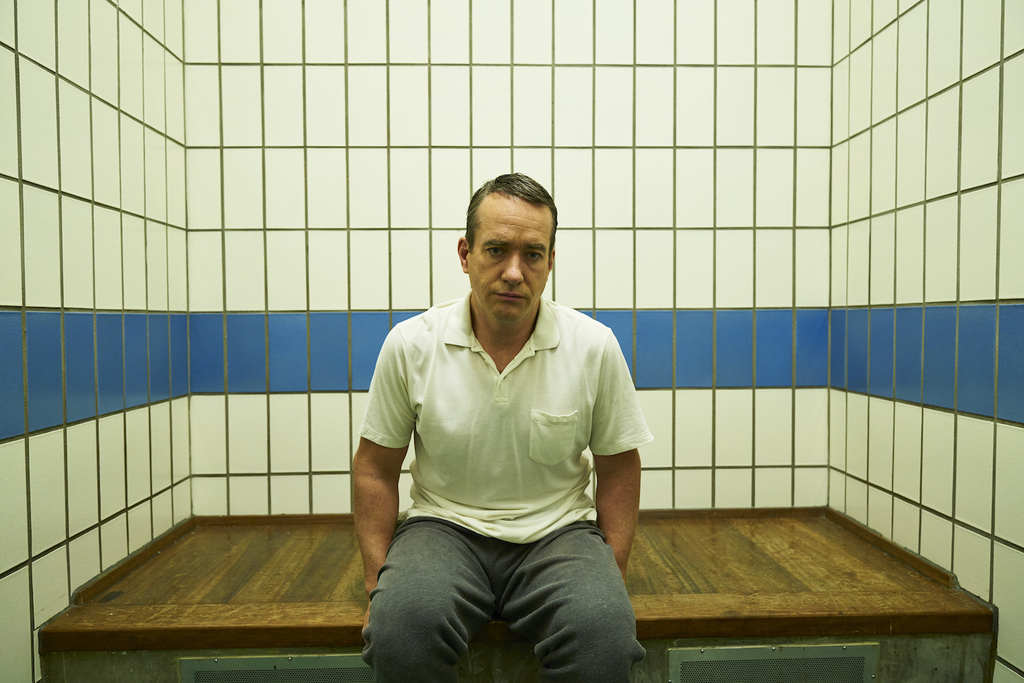 The QC’s summary (somewhat heavy-handed) rounds us off far better than criticism can: justice isn’t entertainment; we should beware when popular feeling is co-opted by political agenda. Having said that, Quiz looks set to be popular itself, and for the same reasons that I suspect people are taking part in virtual pub quizzes at the present moment: nostalgia, communal experience, and the illusion that, in a world of uncertainties, there are cut-and-dry answers, as Diana kindly puts it. Innocent or guilty, the story of the coughing major is a fable for an age of armchair witch-hunts. Shared folk wisdom might bind us together around the pub quiz table. But it can also divide us.