Who is America? is hard to watch, and difficult to turn away from; Sacha Baron Cohen’s back, and he’s got the USA of 2018 in his cross-hairs. A country of extremes is best examined through a variety of lenses, and Cohen’s new stable of characters are trotted out one by one, each attending to their specialist subject. Sacha’s out for blood, ostensibly from both sides of the political chasm; you’ll notice, though, that one faction fares far worse than the other.

The disguises Cohen and his producers choose to bait each guest have been distilled to a fine art, and it turns out that riffing off someone who magnifies your beliefs is just as effective a litmus test as introducing your straw anathema. 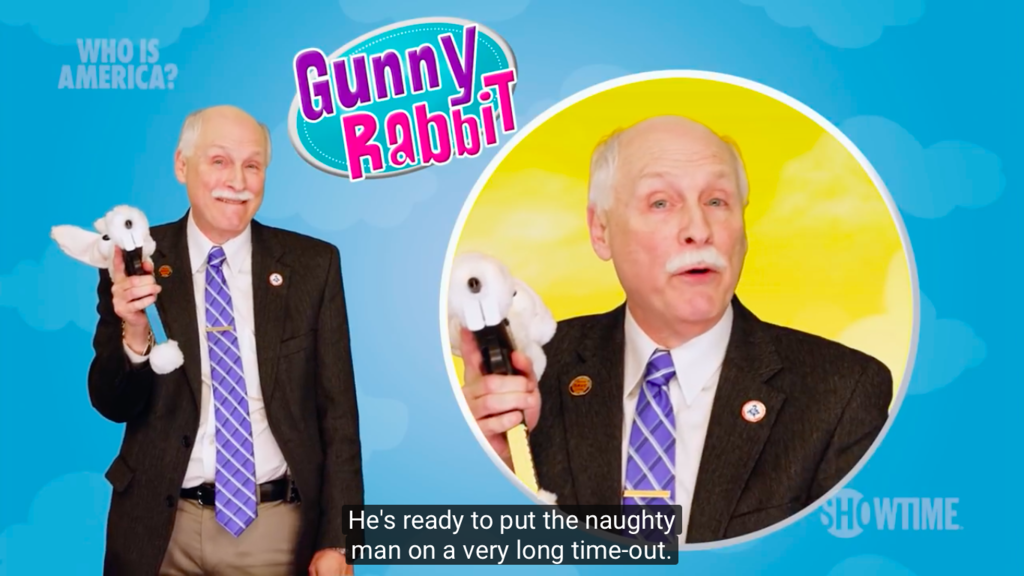 The disguises Cohen and his producers choose to bait each guest have been distilled to a fine art, and it turns out that riffing off someone who magnifies your beliefs is just as effective a litmus test as introducing your straw anathema. Thus far, Israeli anti-terror expert Erran Morad – and his cartoonishly macho-militia manspreading – is working very nicely with conservatives. Morad’s shock and awe angle – incredulous: “they tried to stop four-year-olds having access to guns?” – proves particularly conducive to far-right nut jobs and racists feeling free to lend their public support to programmes like Kinderguardians, arming “certain gifted children” from the age of 3: after all, “A first grader can become a first grenader” if only we’d let her. The sense you get with, say, Philip Van Cleave (a gun rights advocate who stars in Morad’s training video for toddlers, holding a gun disguised as a teddy bear and singing “aim for the head, shoulders not the toes, not the toes”), is that he’s been waiting his whole life for someone to agree with him; for a space in which to air views even he seems to know are controversial; to scream from the rooftops about how much he loves guns and hates people who don’t. 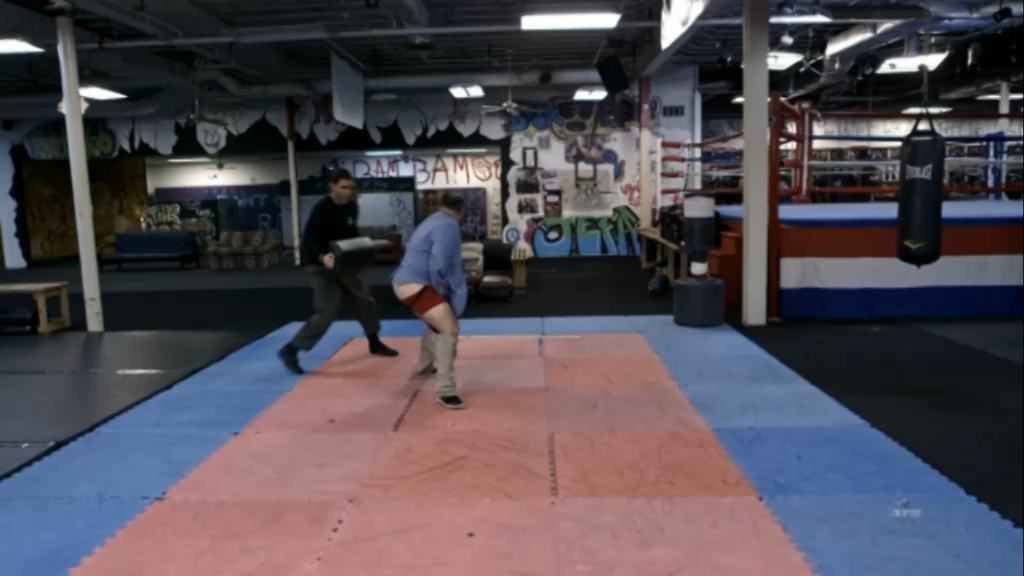 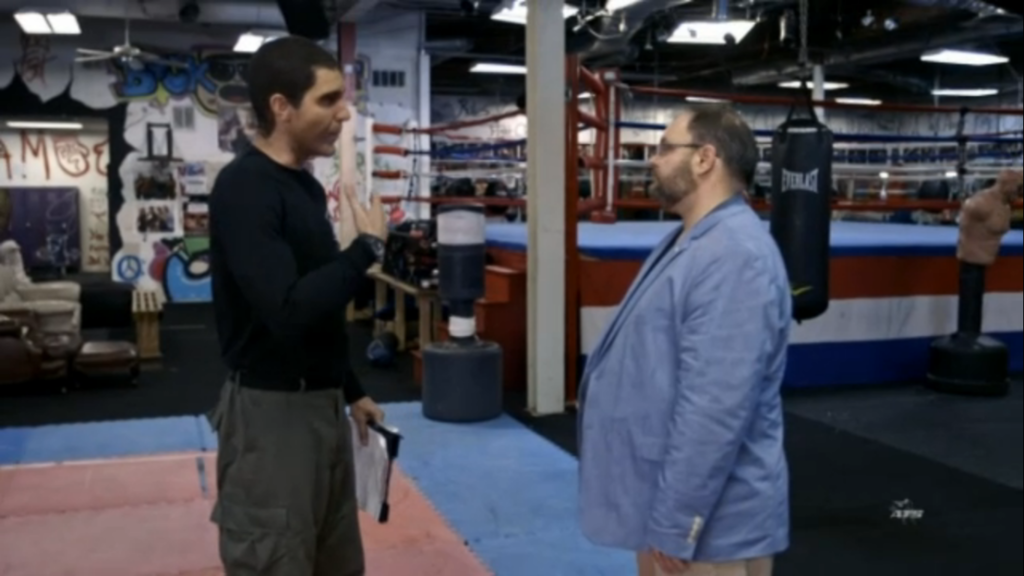 Screen shots from Who Is America? 4od

Morad is devastating in his bald advocacy for the interviewee's deepest darkest beliefs; these suppressed uglinesses see light, perhaps for the first time, and become amplified in something like an idealistic tennis rally. As each sketch reaches fever pitch, public figure after public figure espouses viewpoints and initiatives beyond the pale. It was Morad who shepherded Georgia State Representative Jason Spencer into the most surreal segment of television I think I’ve ever seen, wherein the politician can be seen screaming the n-word and charging into Baron Cohen, backwards, arse exposed and threatening to make ISIS ‘homosexual’. Erran Morad (and his deliciously sharp revulsion at the left’s ‘anti-tragedy agenda’) is wheeled out again for Dick Cheney – who, in the show’s second episode, thoughtfully nominates the Desert Storm operation when asked for his favourite war before autographing a water-boarding vessel for Morad without missing a beat. Pretty hard to come back from something like that, especially if it was bubbling beneath the surface all along.

Erran Morad (and his deliciously sharp revulsion at the left’s ‘anti-tragedy agenda’) is wheeled out again for Dick Cheney – who, in the show’s second episode, thoughtfully nominates the Desert Storm operation when asked for his favourite war before autographing a water-boarding vessel for Morad without missing a beat. 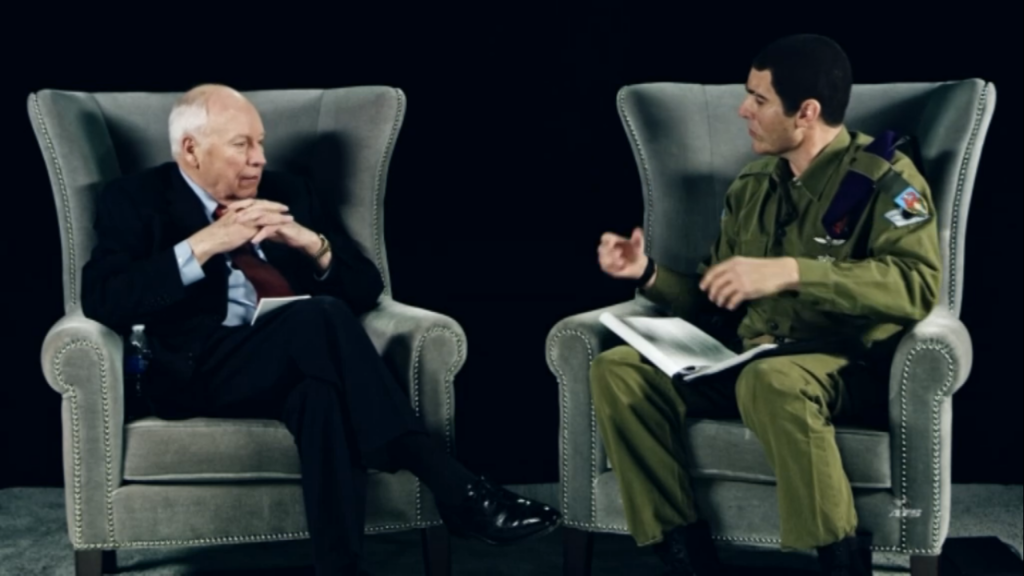 From firebrand caricature to straw liberal, Cohen’s Dr Nira Cain-N’Degeocello (a straight white man, for which he apologises) is perfect for prodding a different incarnation of the same biases exposed by Morad. In the first episode, N’Degeocello falls a little limp – his Healing the Divide project, “reuniting a fractured America”, brings him to a Republican couple’s house for dinner, which becomes more a study in How Polite Is America? than Who? – but, as the star of Episode 2’s closing skit, he steals the show.

The final minutes of Who Is America?’s second outing see N’Degeocello pitching an initiative for economic reinvigoration to the residents of Kingman, Arizona. “Who wants to see huge economic growth here?” asks N’Degeocello. The audience applauds: “Everyone!”, they shout. “Who wants to see an investment of 385 million dollars?” More clapping. “I’m here to tell you”, Cohen-as-Cain continues, “that Kingman has been chosen as the location for a brand-new, state of the art…” – cut to expectant smiles – “…Mosque!” The atmosphere plummets: “A what?” This segment devolves into maybe the series’ best so far; N’Degeocello wades on under the guise of faux naivety, and the resulting chaos makes you want to eat your fists. “This town is lucky to have black people in it!” shouts one attendee, in response to the idea of Muslim tourists visiting Kingman. “Of course you’re lucky to have black people here, they add a lot to the society,” blunders N’Degeocello; so reasonable and generous a response to flagrant prejudice that when the crowd doubles down it’s even more excruciating. N’Degeocello talks over their dissent – “finally, someone who understands the benefits of multiculturalism!” – until one man shouts above the hubbub: “He’s saying there are black people in Kingman who aren’t welcome here either but we tolerate them.” How magnanimous. Even N’Degeocello doesn’t know what to say. 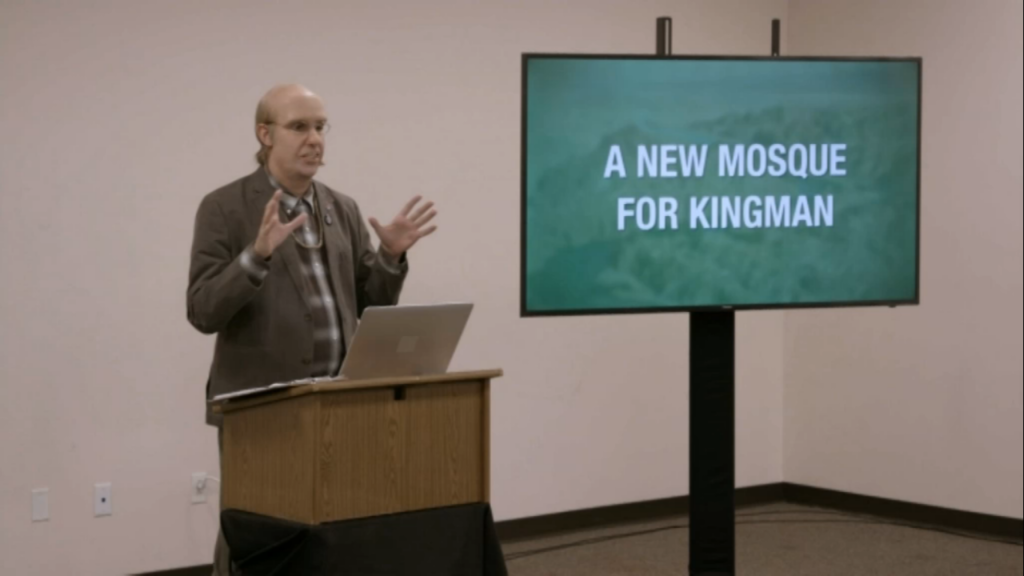 As one might have expected, Who Is America? has not been without controversy. Cohen’s brand of comedy tends to fall into two camps, and I’ve focussed on the former: a personality is set up with one of Cohen’s characters and left to embarrass themselves, with minimal intervention. This covers the Spencers and Cheneys of the world, with whom it is very difficult to sympathise. The second genre of skit is, morally speaking, less black and white, and hinges on Cohen pushing an absurd script into someone’s hands and seeing how far they’ll go. ‘How far’ could tell us about their moral vacuity, ‘I’ll do anything to be on television’, or about the power dynamics at play between Cohen’s chosen character and his victim. Episode 2 of Who Is America? sees Corinne Olympios, a former contestant on reality show The Bachelor, deliver a message about sponsoring child soldiers into camera. She’s fed lines about volunteering in the Ebola crisis and stopping a massacre after being ‘recognised’ by a war lord, but – while it’s easy to laugh at her — the knife cuts both ways in her segment. Where does setting someone up turn into bullying? Into intimidation?

Where does setting someone up turn into bullying? 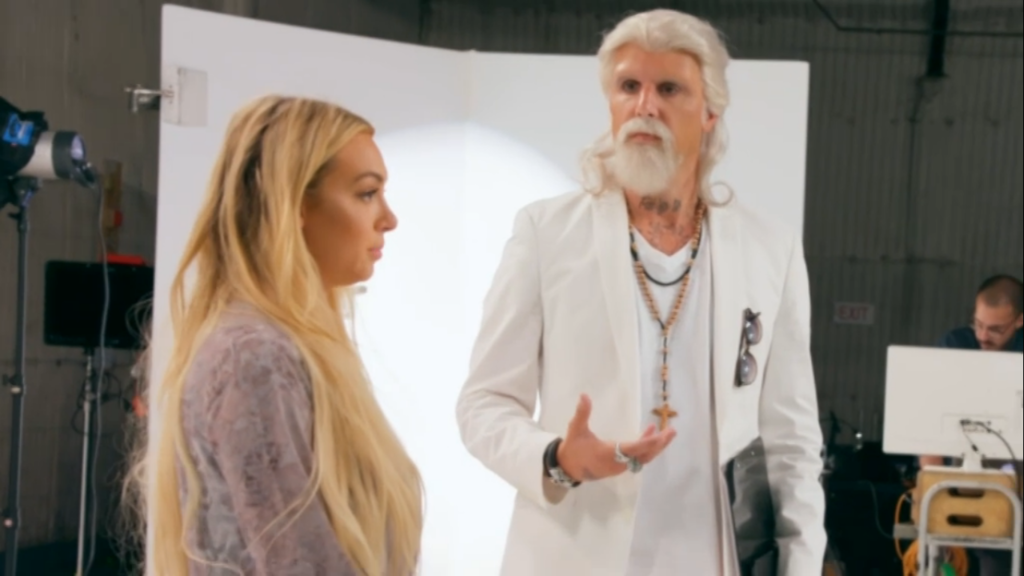 Cohen (and comedy in general) are at their best punching up, not down. In the same way as the sketches are often improvised, their ramifications on broadcast are unscripted too. Thus far, though, outcomes have been generally positive: Mayor of Kingman, Monica Gates, told the Washington Post that the video has spurred the city to prioritize “ongoing diversity efforts.” Jason Spencer is gone (after being elected to his post four times in a row) and one Ermo43 listed a signed waterboarding kit on eBay before donating the funds to Amnesty International. Olympios said, to the Daily Beast, “I’m so excited to be a part of his new project. I mean, not everyone gets to just be a cameo as themselves, so it’s fucking awesome.” Perhaps most satisfyingly of all, Who Is America? sees left-wing Bernie Sanders and Ted Koppel confronted with Infowars-esque conspiracy theorist Billy Wayne Ruddick. They both emerge bemused but unscathed, and prove that – contrary to the protestations of skewered conservatives – it is possible to be on camera without spouting hate speech or endorsing the arming of toddlers. The fabric of a person has to be in place before it can be revealed; bigotry isn’t spontaneously generated beneath the glare of a film crew – although it can be scripted.