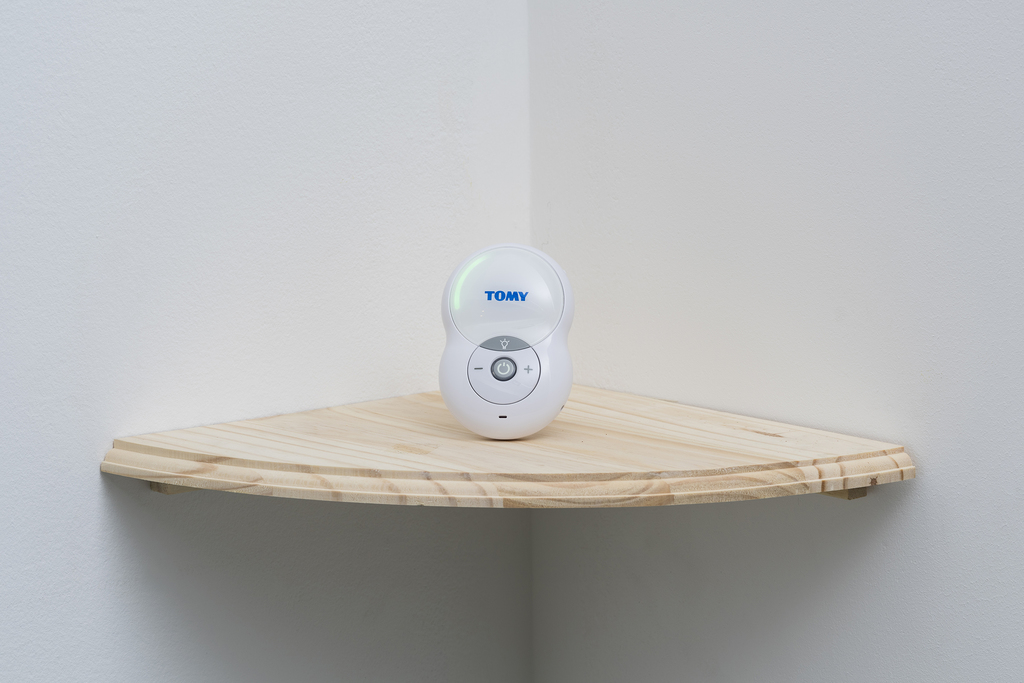 This is an exhibition for a generation a little older than I, slightly younger than my parents, and for anyone who feels like they’re treading water.

This is an exhibition for a generation a little older than I, slightly younger than my parents, and for anyone who feels like they’re treading water. A self-identified ‘Thatcher’s Child’, Alice Theobald stages a cyclical, self-aware encounter between the audience and the environment of her exhibition, Weddings and Babies at Pilar Corrias. 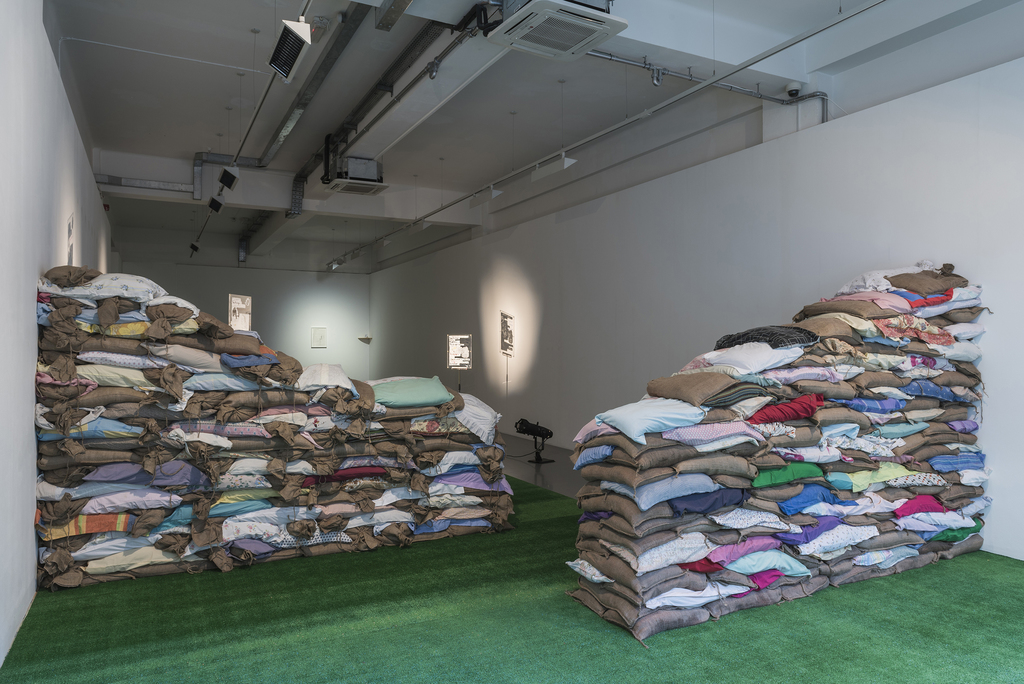 Entering the gallery, the viewer’s journey through it is already plotted – much like, Theobald implies, their position in life might be. Astroturf covers the floor; two barricades of sandbags, some covered in chintzy pillowcases and fabric, dissect the space. The first work we see is Untitled (Love and Patience), a looped video of a dog considering a tennis ball. Around him, people come and go, performing non-specific quotidian tasks. It’s hard to tell what kind of building they’re in – it has the atmosphere of a café’s back room, but the way some of the players move in and out of it implies a space open to the public. The little terrier seems paralysed by the proposition of the ball. We know dogs like balls, and he seems to know that too. What’s stopping him? Does he not know how to handle one? Is he suspicious of the pleasure that possessing it might bring? Waiting for it to do something? Whatever his problem, it’s important enough to keep him almost frozen, occasionally looking up at people walking past, sometimes backwards, sometimes with purpose and sometimes without. He seems like a lonely, bewildered little thing – and the video, despite its mildly absurd subject matter, projects these feelings onto its viewer. We can’t connect to the humans on screen any more than the dog can; we’re just as perturbed as to their motives and relationships to each other as he, and find ourselves equally fixated on the Tennis Ball Problem. 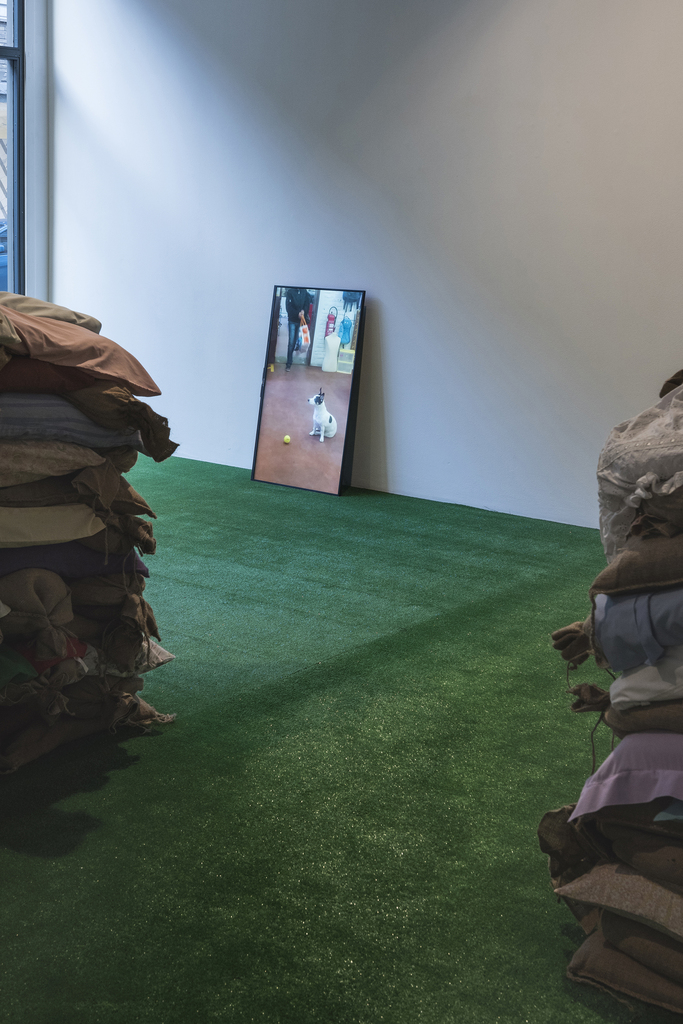 Leaving Love and Patience behind, we wind through the hessian sandbags and up to a series of microphone stands which feel like lecterns. They each hold a pane of clear Perspex, drawn, painted and written upon on both sides. Of course, the prompt is for us to take the words as our own, like a dream where you’re suddenly on stage and expected to give a speech. ‘She wants a corner bath/ The ones that blow bubbles out/ It would always flood the bathroom/ She’s just into the 90s at the moment/ Dad fell again yesterday/ We need to start saving for a home.’ The subject matter of the text is mundane, but the way it is presented – and the language used to express its sentiments – lends a certain profundity; the incongruity of form and content, augmented by the implication that these words and worries might be our own, make these works surprisingly unsettling.

‘She wants a corner bath/ The ones that blow bubbles out/ It would always flood the bathroom/ She’s just into the 90s at the moment/ Dad fell again yesterday/ We need to start saving for a home.’ 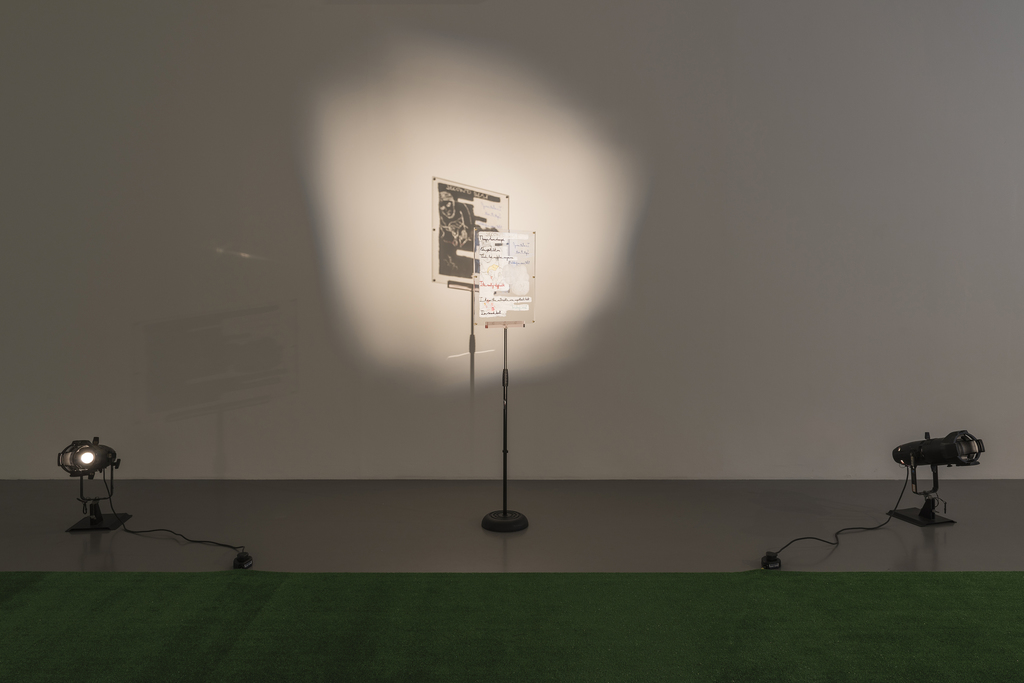 Lines between audience and artwork are deliberately blurred in ‘Weddings and Babies’ - perhaps fittingly, for an exhibition concerned with such universal themes. Theobald, though, understands the scope of the microscopic, and the wide-ranging relevance of the hyper-specific. Cocaine Plumber, ostensibly detailing someone’s experience of having an unpleasant and disruptive workman in the house, offers such specificities as ‘There’s snow outside’, and ‘still in my pyjamas’. Written like a poem, with line breaks, rhyme and rhythm, the way the words appear is just as significant as the way they might sound if read aloud. Not only are the letters of each word joined up, but each word is joined to the last, each line to the one below it, lending the impression of breathless panic and speed to the story about an afternoon of inconvenience. There’s also a touching nod to ‘grown-up-ness’ in the demonstratively cursive script, like a child has taken their teacher’s advice to join up their letters too literally. Is this good enough? Weren’t you listening? 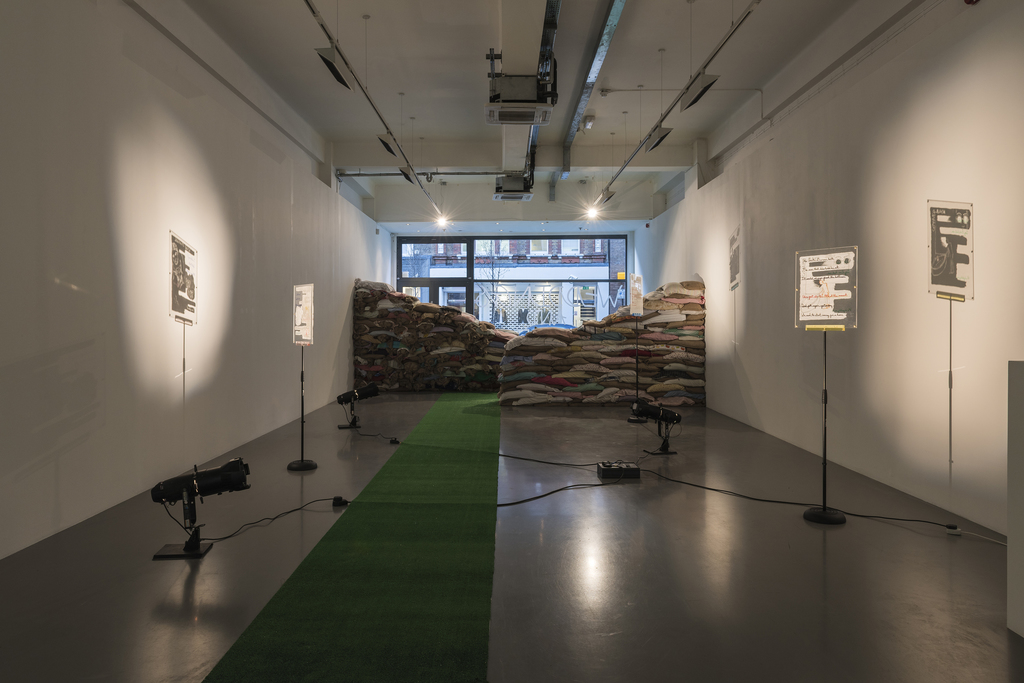 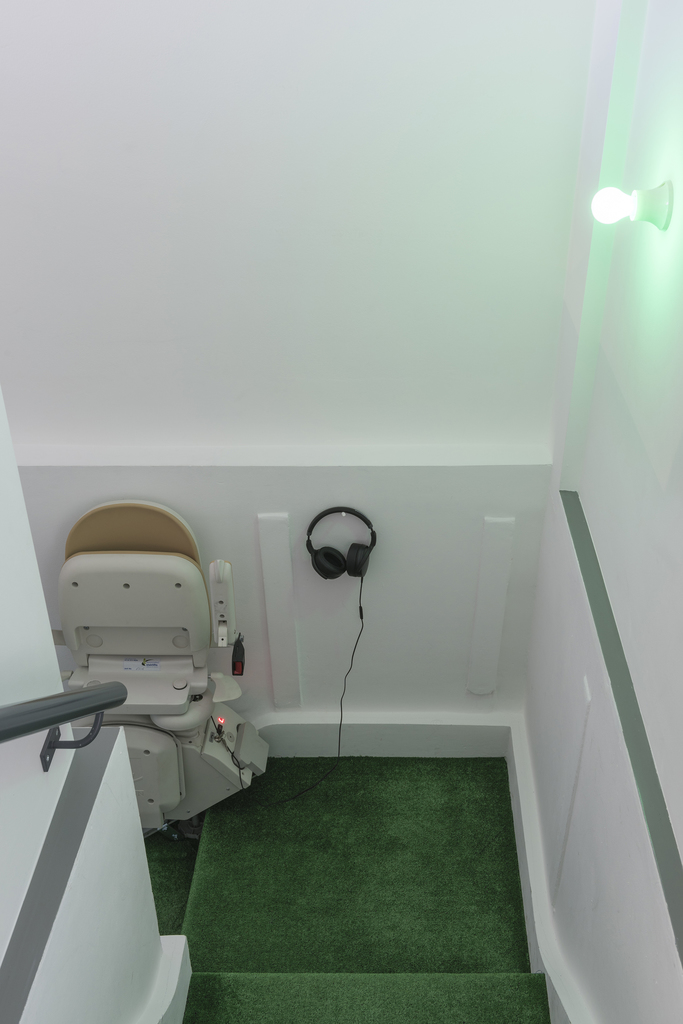 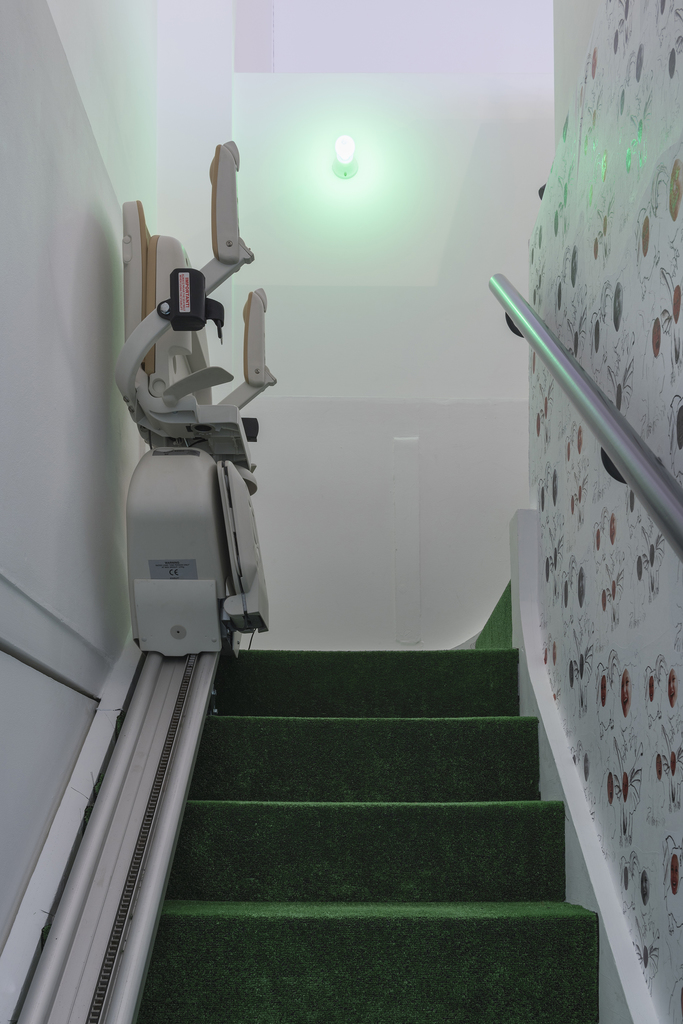 Delivered safely to the lower gallery, the sandbags dressed as cushions we saw in the first room are back; here, they sit on the same astroturf which links all the rooms in the exhibition, and serve as the natural – if infantilising – place from which to watch Theobald’s last piece. The Next Step is another video work, this time presented in 3D, which follows the bodies of two men walking around a park. The shot cuts them off at the neck; one is pushing a pram with a baby in it, and the other is walking his dog. As they move, a stilted conversation cut with pantomime stresses is imposed over the footage. ‘It must be easier for you’, says one. ‘Why?’ – ‘because you’re so easily lead.’

In the film’s closing seconds, the baby looks into the camera, and straight out at you. 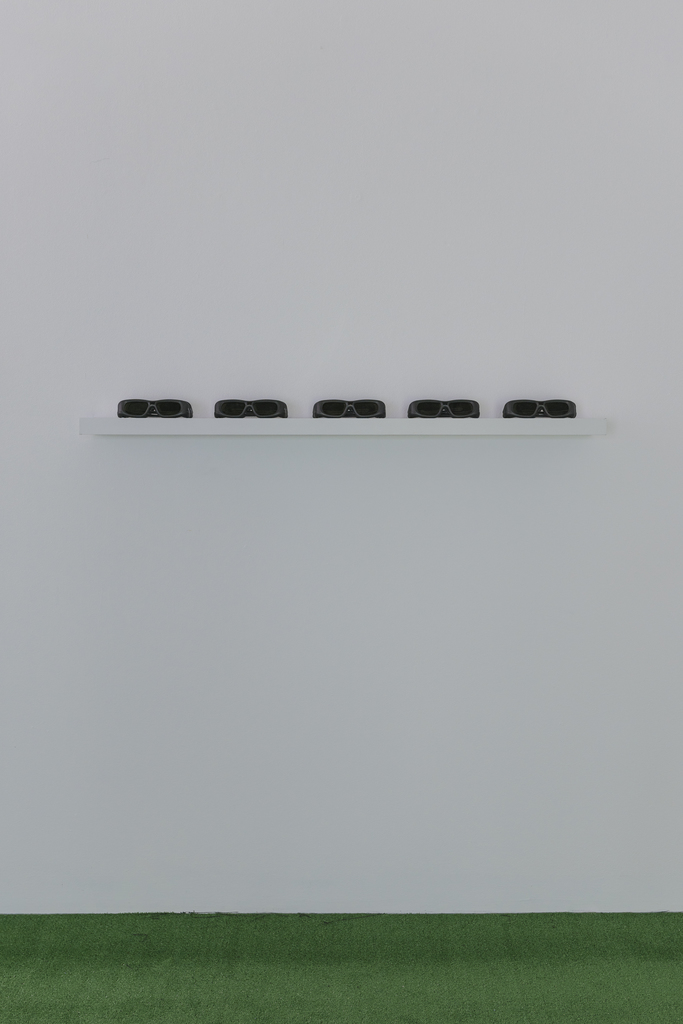 After a few minutes, it’s hard to stop oneself from imagining that the conversation is taking place between the baby and the dog, rather than their guardians. The dialogue loops, avoiding the perfect circles of He Never Imagined He Would Be So Moved but returning again and again to the same themes, often via the same route. ‘The next step. That’s what you lack.’ ‘The next step?’ ‘I feel stuck’ ‘I have no money’ ‘You’ve always seemed comfortable’ ‘I need new shoes’. Transposed onto animal and infant, these remarks take on a level of humour that would be lost if we left it to the adult men behind them. Of course a baby has no money. A dog doesn’t need shoes, new or otherwise. The (slightly lame) existential crises staged in the dialogue seem all the more absurd piped through a German Shepherd, but there’s something darker at work behind the laughs. The men, we come to realise, feel just as helpless as their charges would be without them. They represent a generation caught between childhood and responsibility, independence and impotence. In the film’s closing seconds, the baby looks into the camera, and straight out at you. It’s all a little close to the bone. 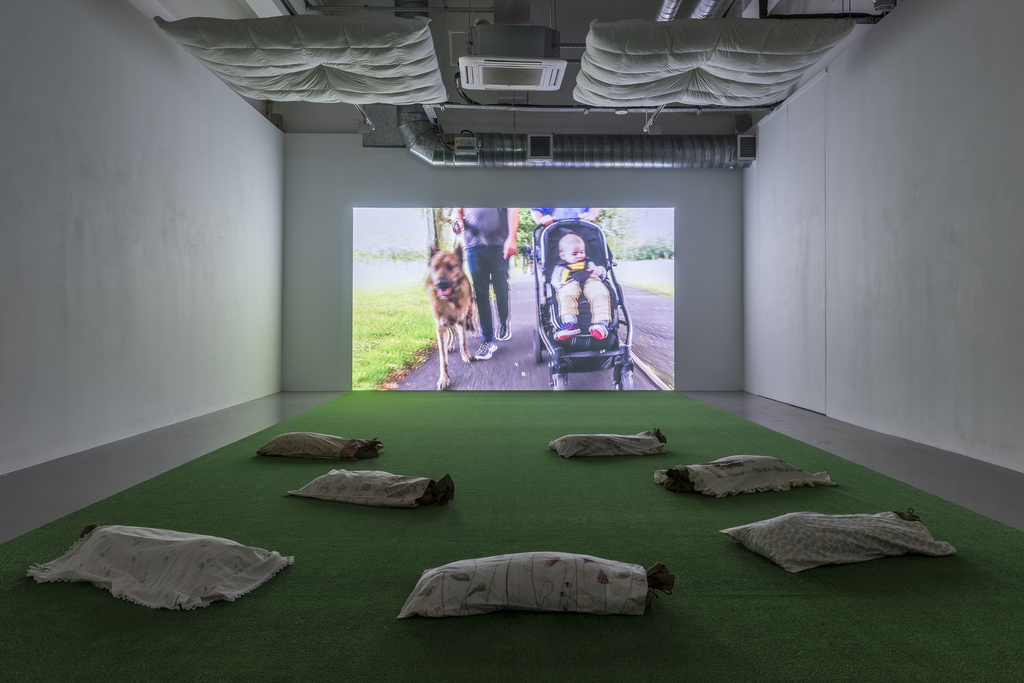