In 2003, Nike launched a line of trainers called True Red, marketed as the vampire sneaker, or ‘vampire vamps’, after their red and black colour-scheme, darkness and blood.

Such are the entry-wounds for Danielle Dean’s video, True Red Ruin (Elmina Castle), showing at Whitechapel Gallery as part of Artists’ Film International, whose common thread this year is the bleed between fact and fiction.

In 2003, Nike launched a line of trainers called True Red, marketed as the vampire sneaker, or ‘vampire vamps’, after their red and black colour-scheme, darkness and blood. 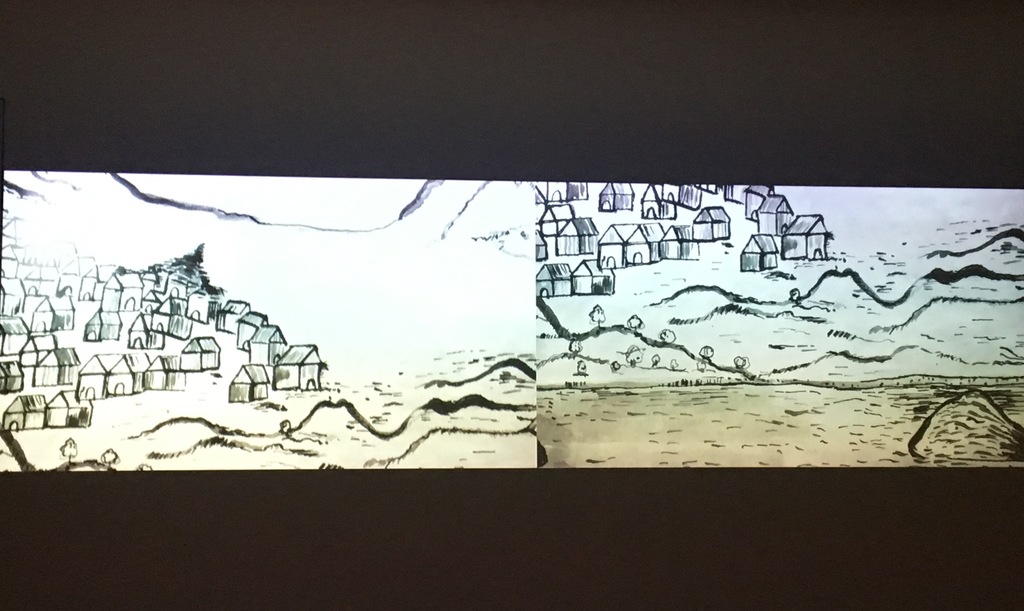 Dean is not so much interested in showing us the tired old vampire lurking in his castle, but the vampiric nature of cultural production in the world around us, the forces that suck us dry of our true potential. Dean is extending the work of Karl Marx, who said that ‘Capital is dead labour, which, vampire-like, lives only by sucking living labour, and lives the more, the more labour it sucks.’

Marx uses the phrase ‘wage slavery’ to advance his comparison between slavery and wage labour, between owning and renting a person. Racialised chattel slaves, ripped from their birthplaces and traded as possessions, were the capital that led to the industrious revolution, then the industrial revolution; and, for Danielle Dean, the late-stage capitalism we live under today. Although it is more than a bit problematic to use the first-person plural ‘we’, as a white, British man, Dean’s work gives me a way of engaging with problems such as this. Indeed, Dean’s project is to unveil and interrogate the power struggles throughout history across race, gender, and class divides.

While the title ‘True Red’ (named after a commodity) reminds us that – according to Marx – we are all slaves to capital, the focus here is on an examination of the slave-trade, and how colonial history shapes identity. Dean’s work explores what she terms the ‘colonisation of mind and body’ and examines the power structures present in different media – news, advertising, social networks – and how they affect us today.

There is an undeniable charm in the way the story is told, namely with talking-head-style video diaries, recorded with smartphones. An intimacy between speaker and viewer. We might have tuned into a vlog, and I think that’s important – this is a real person telling us a story about their everyday life. In fact, the artist Dean herself is acting in the film, along with her sister Ashstress Agwundobi, and her friends, who all live in Cuney Homes, an affordable-housing block in Houston that also happens to be built with red brick. A sense of authenticity and familiarity shines through, ushering us over the stumbling blocks that less accomplished works might have when genre-bending a fictionalised account of an historical fact. 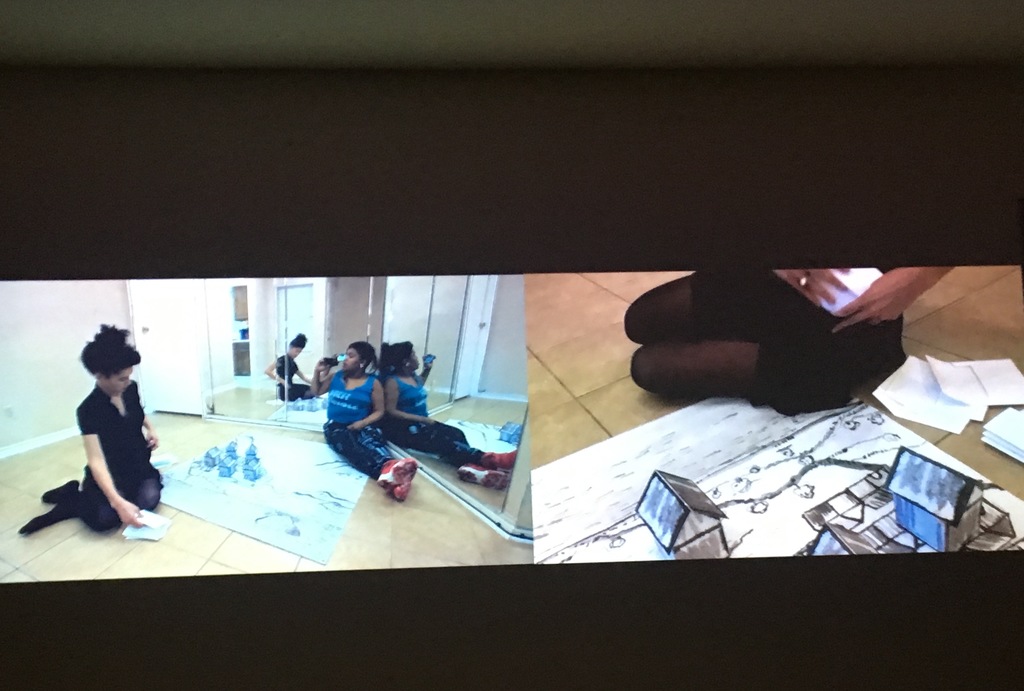 As waves begin to churn on the soundtrack, we see a painting of waves rotating to represent the movement of the sea. We’re borrowing from a visual language more akin to theatre than film. Audience participation and suspension of disbelief are solicited to build the scene. True Red Ruin will then frequently go split-screen, showing us not only the painted sets but the characters holding their diary-cams in front of them. The effect is charming; far from a self-satisfied postmodern gesture highlighting how everything is a construction, this is more like, ‘you don’t really think I have the means of production to fly out to Ghana just to get a shot of waves, do you?’

‘This is where the castle is going to be built,’ the colonialist character (played by Dean) tells us during one of her ‘site visits’. She’s standing in front of a painting that’s somewhere between a map and a landscape and pointing to a part of it. As site manager, she explains, it is her role to get the local community to pay for the castle’s construction.

Cut to the local community talking about why they even need a castle. ‘It might bring us more work opportunity.’ ‘Makes sense,’ replies Agwundobi’s character, who still seems unsure.

The drama continues in this vein, all revolving around the construction of the castle, switching between the perspectives of those building it, and those in whose home it is being built. Dean has vamped the white-washed Medieval Castle whose outline appears in clip-art-style cardboard cut-outs the colour of the Nike shoe. The set design clearly takes its cue from point-of-sale displays, a promotional strategy intended to draw our attention to products. Of course, our attention is already on the castle, as that’s where all the dramatic conflict is – but, by drawing from the aesthetics of commerce, Dean threatens to flatten this narrative like she has pushed the castle into carboard. The flow of capital and the distribution of power ultimately manipulate our narratives, suffusing everything from monoliths to footwear. 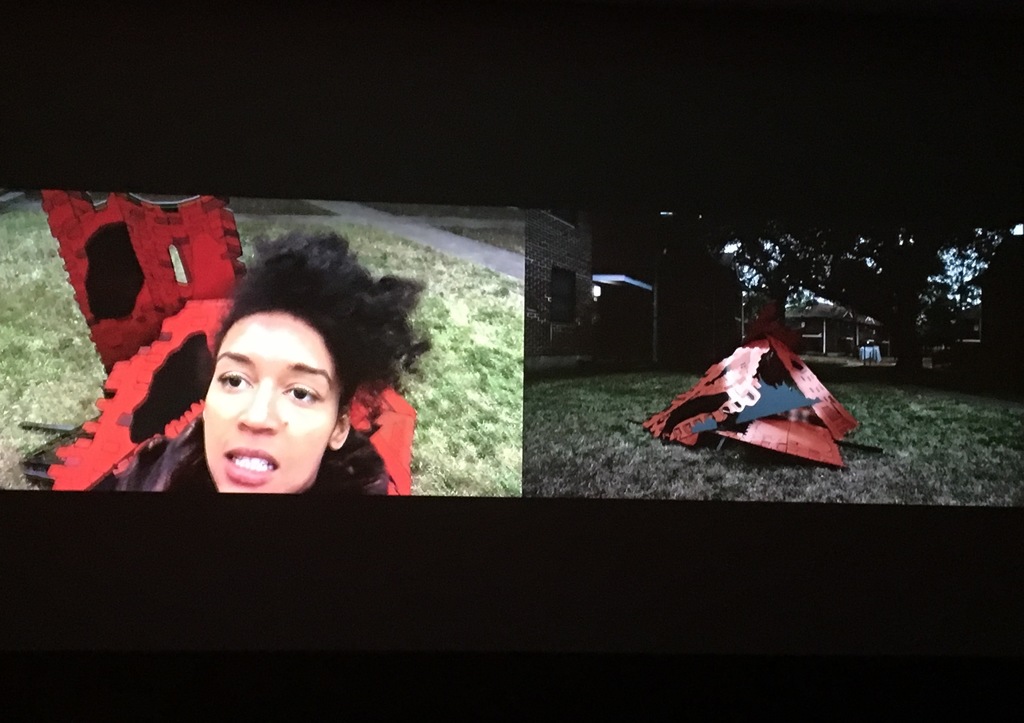 Standing in front of the red brick backdrop we hear from Adrian, who works at the castle, answering phones. ‘Might as well take advantage of the jobs they have available for us. Extra money to put in your pocket. Who don’t need that?’ It’s in the dramatic irony of lines like these that we sense the inevitable tilt of power from micro to macro, and from the personal to corporate. This tableau inhabits past and present systems of oppression, a reminder that capitalism in any incarnation will always punch down – and that it requires the majority of the population who necessarily inhabit the bottom tier of its pyramid to be immobile in their place there. Whether this is instituted by force or promise of something like the American dream, there will always be capitalists (Trump) who strive to convince a people (Mexico) to fund their own wall, and the means by which they are excluded from the privilege at the top of the chain.

‘Might as well take advantage of the jobs they have available for us. Extra money to put in your pocket. Who don’t need that?’ It’s in the dramatic irony of lines like these that we sense the inevitable tilt of power from micro to macro, and from the personal to corporate.

Slavery was (and still is) propped up by enormous structures, both physical and institutionalised. Dean makes of Elmina Castle a collapsible and erectable clip-art set, a system of control that can be moved to different places and different times. Elmina Castle’s symbolic power can leap across forms: in one scene, confining brick walls; in another, the walls of Agwundobi’s living room, where she and her friends are watching the votes come in (‘Why is Trump-? Why is he president?’); in another, the vampire sneaker. The story unfolds from the shoe, and Dean blurs fiction and reality to bring to light the structures enfolding our present day. She smashes together these cultural interstices – the castle with the shoe; the colour red with class struggle – to explode the factors mediating and commodifying subjectivity throughout history. ‘They think they’re gonna build a castle on my ancestors? Well they’re gonna to be missing a lot of pieces.’