Wilting outside the glow of the limelight like plants whose leaves turn yellow in the shade, Louis and Aziz have staged tentative appearances – to mixed receptions.

There’s a really tricky knot to unpick, surfacing with the apparent return of C. K. this week, and Aziz Ansari a few months ago, to their comedy careers. Someone – an agent, a publicist, club manager or TV executive with a programme to fill, likely all four – has decided that these poor men have suffered long enough. Wilting outside the glow of the limelight like plants whose leaves turn yellow in the shade, Louis and Aziz have staged tentative appearances – to mixed receptions.

While C. K. received a ‘standing ovation’ even before his set began, the atmosphere in the room sounds varied. A woman – alias S. B. in Vulture’s report of the evening – said of the audience that “there were at least four to five females that I could see, and three or four of them were not having it. They were just looking at him, deadpan, straight, not having it.” Another witness elaborated: “It felt like there were a lot of aggressive men in the audience and very quiet women.” Here, then, seems set up a microcosm of the #MeToo cosmos, itself assembled from myriad exchanges like Sunday’s. 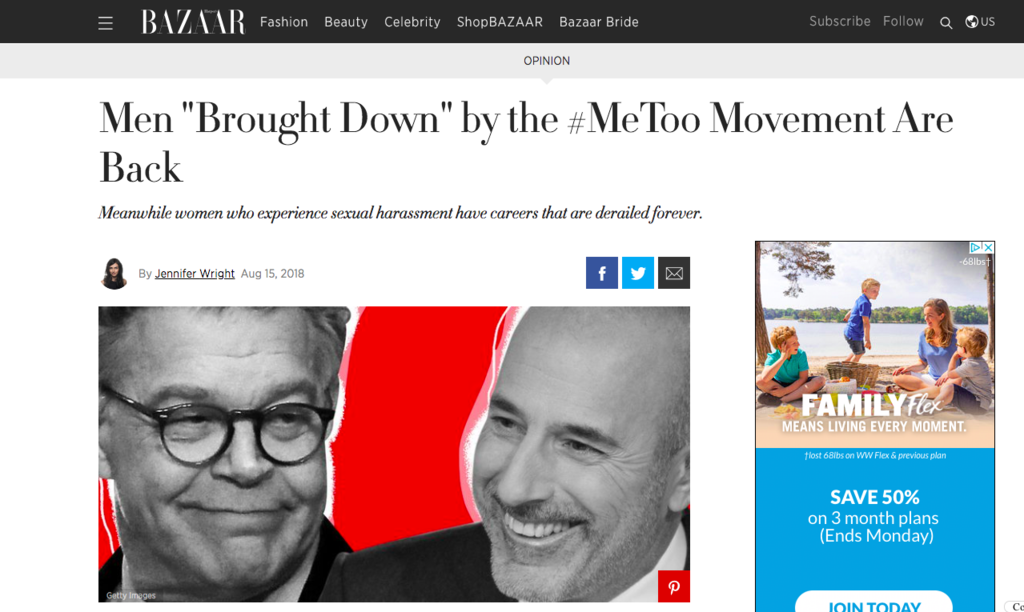 This quarter of an hour, one club, one man, one audience, has a great symbolic weight. The set signified – in the moment, and spirals to greater significance as we analyse it – a collective reckoning with something personal as well as culturally earth-shattering. I won’t sum up the #MeToo movement for you – you were there. Part of its power, though, lay in making thousands of stories into a single narrative: Supposedly Great Man is unmasked as Predator, again and again, until the stories assume mythical proportions and become one. At the same time, #MeToo gives the power of a thousand voices to each individual tale, testimonies which would otherwise be lost in a hubbub. It is a movement which harnesses the dual powers of strength in numbers, and the emotional resonance of personal testimony. As far as a wider picture is concerned, #MeToo has been momentously influential; after all, it is from a million isolated incidents that a cultural trend emerges. What happens, though, when the trend is applied to the unnavigable nuance of individual behaviour?

As the #MeToo wave broke, every specificity became magnified into a global truth, and every wide-reaching conclusion was applied to minute and ungovernable moments. Zoom in, zoom out – Louis C. K. is Every Predator, and Every Predator is Louis C.K. He was defended and skewered both, each with the intensity of a personal lifetime’s grappling either with an inner Louis or against Louis-s everywhere. In the search for consensus, women abused by C. K., Ansari, Matt Lauer (also hinting a come-back), Harvey Weinstein (not, thankfully, hinting a come-back) became All Women, and all women were their victims. In the midst of an intensely emotional conversation, the personal is necessarily – and rightly – projected onto the political, the specific onto the wider picture and vice versa.

In the court of public – and private – opinion, people inserted versions of themselves into the shoes of the characters at hand, like they were reading for a part in a play.

Male, female, both or neither, it was incredibly difficult not to apply our own experiences to the ones being picked apart and analysed in a 24-hour news cycle last year. Even if I didn’t know it at the time, Louis signified for me a man – or men – who had hurt me. Me, too. The woman whose account of her now-infamous evening with Aziz Ansari published on Babe.net was me, too, and by this I mean that every instance was held up – individually and collectively – in comparison to one’s own. More, or less traumatic. Similar, or different. Lighter, or more grave, but always side by side; me, too. More than this, the stories – our own and others’ – are compared to a kind of composite, a grand narrative at once assembled from all of them and representing no single experience. On the one hand, it was empowering to finally find a language for a dynamic so insidious that it can still seem impossible to describe. A whole arena of experience, suddenly articulatable! On the other, these accounts were often so detailed as to feel like those shared over a bottle of wine with a friend, and invited all the same equivalences and probing questions. In the court of public – and private – opinion, people inserted versions of themselves into the shoes of the characters at hand, like they were reading for a part in a play.

For many men I spoke to at the time, an initial disgust with #MeToo’s villains often gave way to a sheepish admission that the stories they were hearing made them worry about their own behaviour. So – if the women in that New York club stayed quiet and the men applauded, I can see why. In broad strokes: the women in the audience, identifying with those treated as C. K.’s masturbatory aides, were confronted with his return and forced to reckon with their parallel relegation to that old position of powerlessness. The men were stars returning to the stage, finally forgiven and back in good(ish) standing. Me, too! However wildly off the mark, ethically speaking, the voice of dissent that sputtered how #notallmen are predators, that lamented the fallen careers and tattered reputations, it was a voice which occupied the space of discourse like a low hum: status quo as backing vocals. When my friend asked “how could he do that?” of Louis C. K., he asked of himself: could I do that? Have I? The drone underpinned everything above it, prompting answers to questions unasked but swimming beneath the surface commentary. Why all the articles defending a victim’s right to come forward, or justifying the demolition of a man’s reputation if not to counter the background drone of questions implicit? Questions ancient? Questions written into the fabric of our collective consciousness, which sees men as human, women as less than? 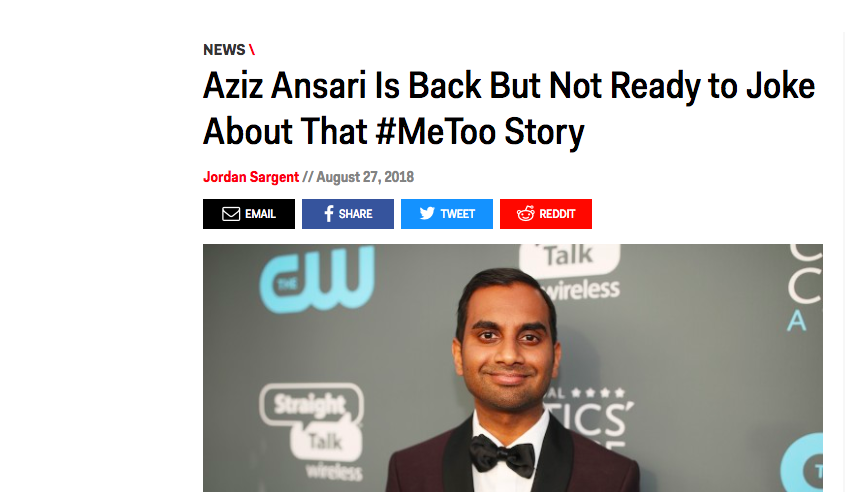 For a moment last year, it was exhilarating (and frightening) to sense a shift in that consciousness. For a moment last year, there was a crackle in the air as my stories – her stories, yours – had an almost supernatural potency: hexes, spoken just right, which could bring a giant to his knees. Toppled! One! After! The! Other! In the thundering narrative on each side of #MeToo, stories are stripped to their barest bones – arguably, to their clearest significance, but also at the expense of clarity. A monster is only scary until you check under the bed and see a beetle. Louis C. K. is back, and how you feel about that will be, I suspect, dependent on your own experience; on the part you play in the Grand Narrative, as well as your own. Who hurt you, and what price did they pay? Who did you hurt, and how? For a brief moment, C. K. has embodied the patriarchy: quite a weight for one man’s sloped shoulders. His return does not mean the end of the movement, or the swing backwards of a pendulum. He’s not so terrifying – just a loser, with his pants around his ankles.