The Wisdom of the Shoal 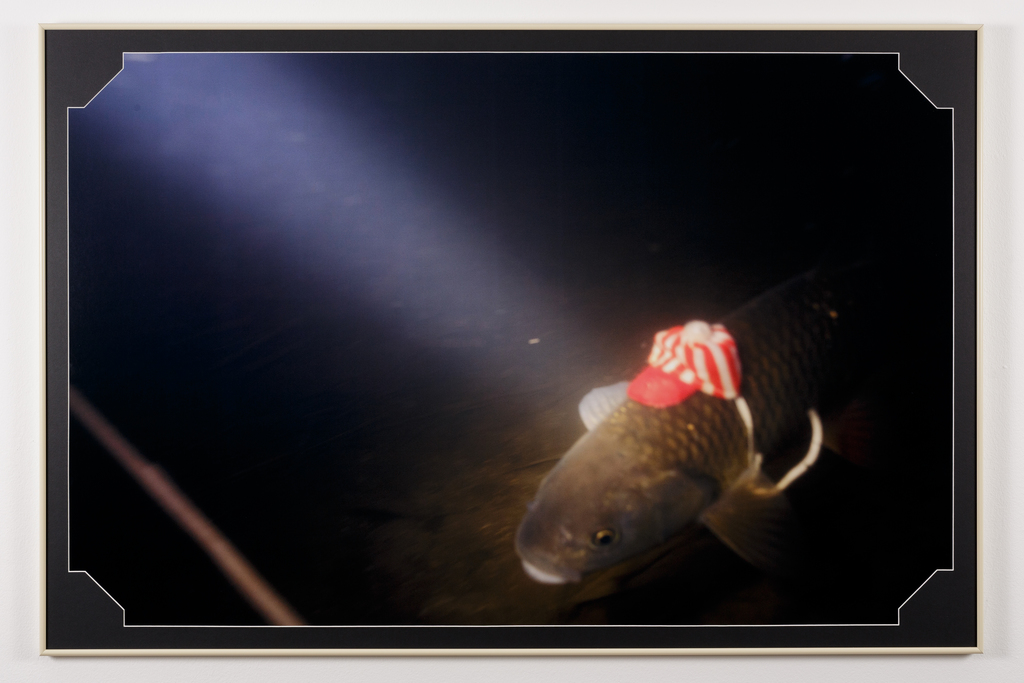 Nostalgia is a powerful thing, and it’s thick in the air at the moment. As populism spikes across the globe, we’re all looking back to a time when ‘everything was better’ (even if, for many of us, that just means a time before Trump).

Nostalgia is a powerful thing, and it’s thick in the air at the moment. As populism spikes across the globe, we’re all looking back to a time when ‘everything was better’ (even if, for many of us, that just means a time before Trump). Nostalgia is necessarily vague, suffusing a worldview with the dreamy haze of rose tinted glasses. 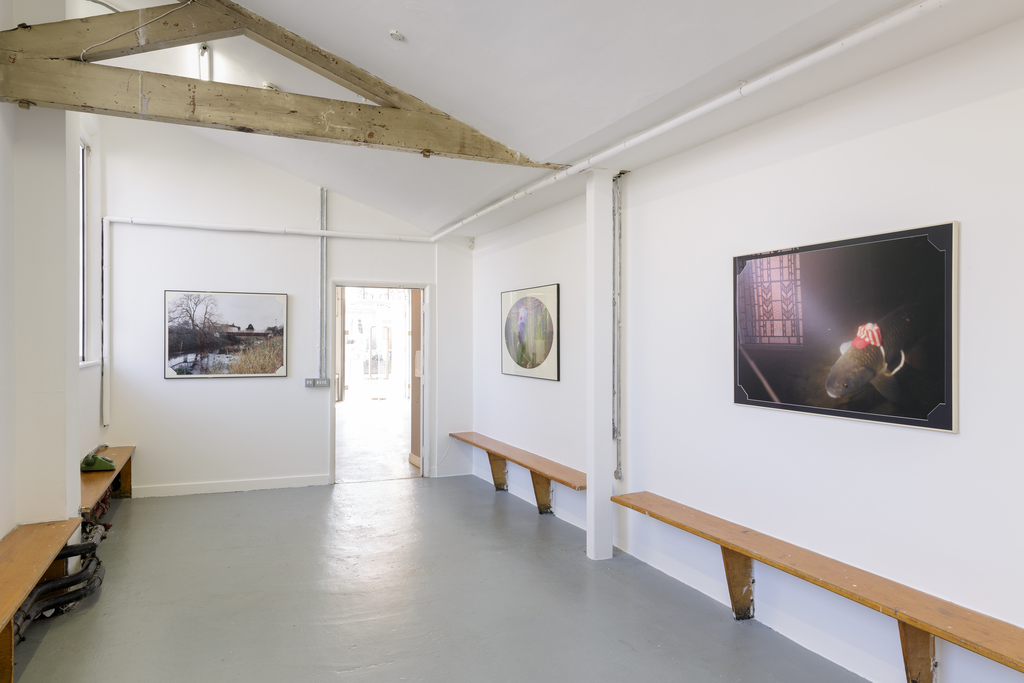 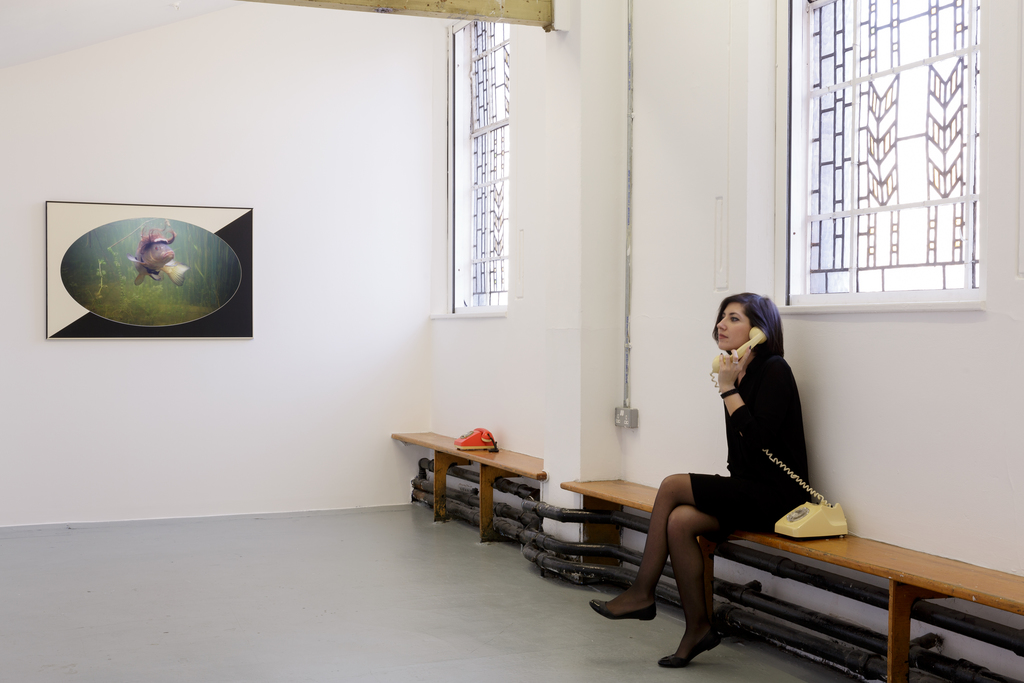 Plop Shop both revels in nostalgia, and makes it ludicrous. The exhibition is born of Munks’ two passions, art and angling – incompatible, you might think, but there’s something about their interweaving which reveals the exhibition to be more than the sum of its parts. And it’s funny. Photos of fish in wigs and hats hang on the walls, in frames resembling those you might find on the mantelpiece of a sentimental relative. The impromptu and unretouched nature of the images mean they feel like family photographs, and so the fish, in their nurse caps and jockey helmets, come to populate the cast of the exhibition’s single room. More than this, they’re a cast with an inferred family, hobbies, and jobs. They even have a taste in music – three vintage phones sit upon the bench along the wall opposite the photographs and play jangly ballads, composed by Munks, on being lifted from the hook. The experience is like being on hold to someone you didn’t mean to call, and serves as a neat little metaphor for the overarching theme of nostalgia. Your call is important to us; time is static. 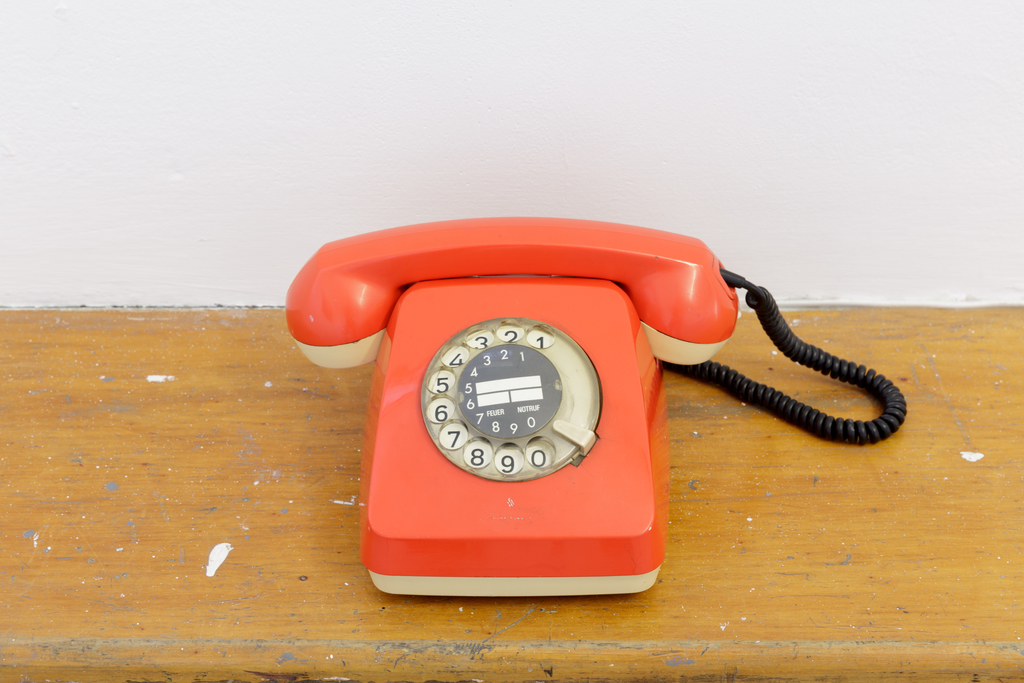 When the music subsides, voices begin. They‘re extracts from a 1979 BBC documentary, ‘The Country and the City: A Film with Raymond Williams’, featuring interviews with farmers and Williams himself. ‘Fertilisers ‘as has its day’, explains a man’s voice. A woman opines, ‘Every county you go to, Great Britain is lovely’. ‘The people was more happy in the old days than they is today’, says the first voice, as that of Williams trickles in. There’s comedy in the cut between the two men, as we slide from a country lilt to prim staccato. ‘The good days seem to be just disappearing within their own lifetimes’, says Williams – emphasis on ‘just’. He describes how, as timespans of fifty years elapse, each generation laments the fading virtue of the world as they remember it. He quotes George Eliot, then her predecessor John Clare, and so on, charting the ‘retrospective regret’ which seems to be part of the human condition. Remember how simple life was before the internet? Before phones? Before the industrial revolution? How about before the Romans invaded? Before the ice age? 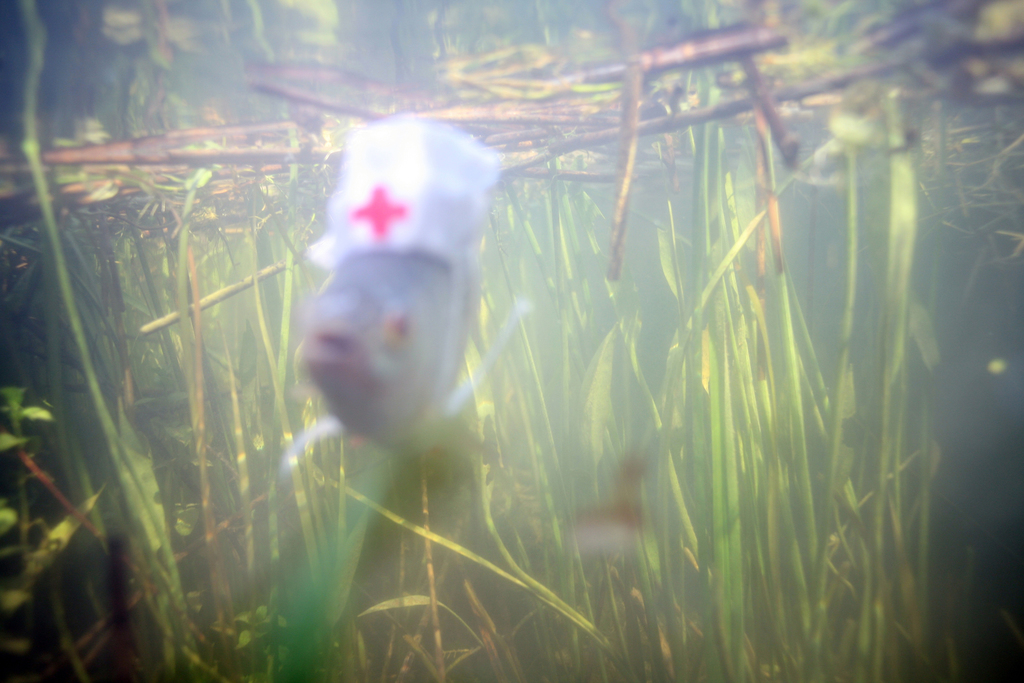 In 1937, James Laver coined his eponymous theory, Laver’s Law. It states that a fashion trend needs 50 years to come back into vogue, as a new generation approaches it with fresh eyes and adds its own twist. Since the 1930s, the speed at which culture advances has greatly intensified, but although the cycle may have shortened – think of last year’s revival of nineties garb, only 20 years since it first appeared – the process remains the same. There’s an equivalent, ‘generational theory’, to be applied to politics, which estimates that fascism rises once every 80 years or so, i.e., the length of time it takes the generation which remembers it to die away. Developed by Neil Howe and William Strauss in the 1990s, the idea rests on an understanding of time divided into four 20 year ‘turnings’ – “high,” “awakening,” “unraveling,” and, finally, “crisis.” ‘Unravelling’ necessarily requires a turning away from whatever benefits were reaped from the ‘high’ and ‘awakening’, looking back – here comes the nostalgia – to a harmony we don’t seem able to sustain.

Perhaps, instead of framed images, we should think of the work as a mirror; we look ridiculous. 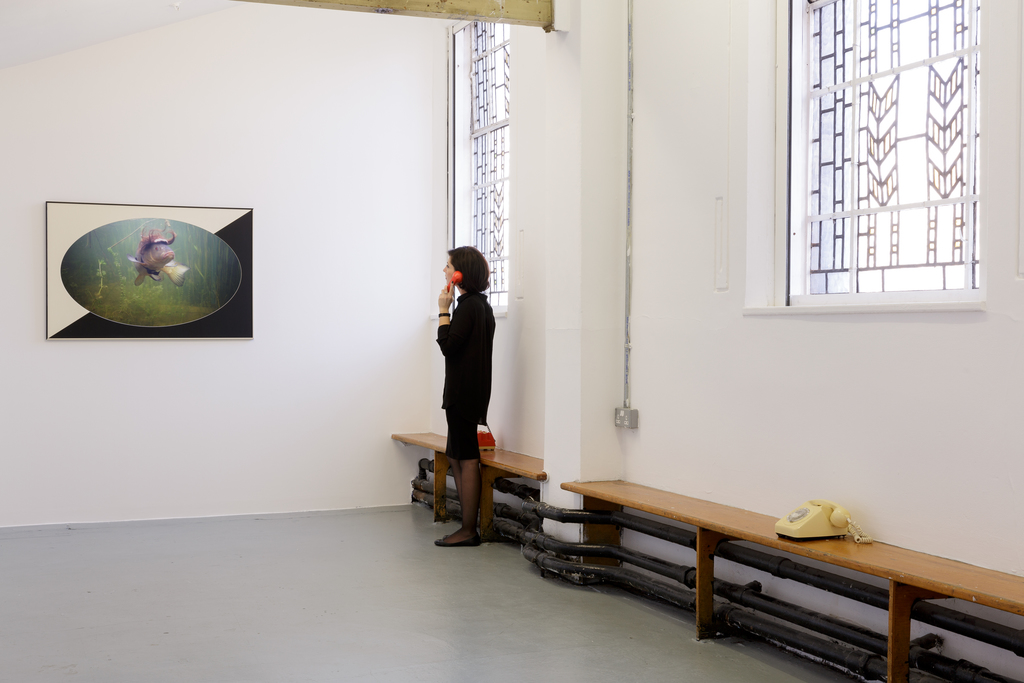 We’re sentimental creatures. Each time humanity takes a leap forward, there’s an equal-and-opposite reaction, as though we were dealing with Newtonian physics and not progress. At the same time, the desire for an easier existence – which prompts advancement in the first place – goes to war with our unease in the face of the unknown. Still on the phone to Williams, as it were, I hear him discuss the way Londoners tried to incorporate green space and allotments into the fabric of their city after 1945, and country vs. metropolis represent stasis and progress respectively. Broadly speaking, leftist politics tends to welcome technological and social advancement, while conservatives err on the side of ‘traditional’ values. The right wing needs nostalgia to push its agenda of maintaining the status quo; women and immigrants in the work place, social equality for the LGBTQIA* community, the redistribution of wealth, are to be resisted because they demand a rethink of the structures which keep those in power where they are. The ultimate nostalgia in western thought stretches back to the Garden of Eden, Williams suggests. Photographed beneath the surface of the River Roding, in a kind of parallel world, the fish inhabit something like a utopia in which we can both recognise and laugh at ourselves. Munks answers the all-too-human wail of vague dissatisfaction – if only it were a little more…; all I want is for… - with a bizarre solution. No one ever said, if only it were a little more underwater-y round here. All I want is for fish to wear hats. Perhaps, instead of framed images, we should think of the work as a mirror; we look ridiculous. 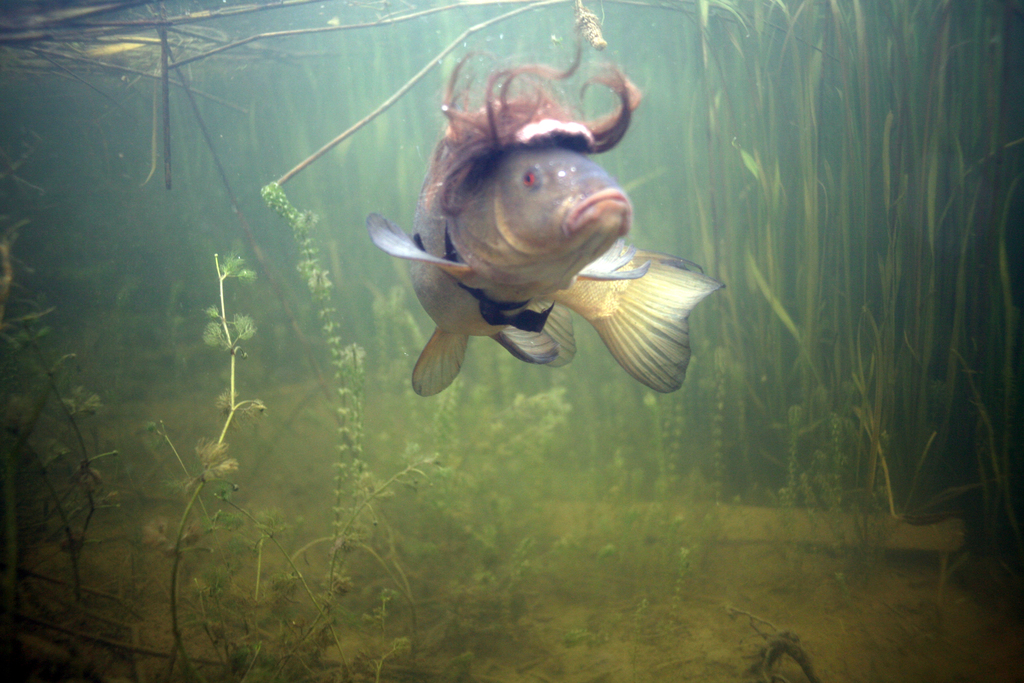