The Killing of a Sacred Deer

When Agamemnon killed a deer sacred to the goddess Artemis, the debt was paid with the life of his daughter, Iphigenia. When Martin’s father died on Steven’s operating table, there could be only one way to settle the score: just as Martin lost a member of his family, so Steven must sacrifice one of his own. This is, after all, The Killing of a Sacred Deer.

When Agamemnon killed a deer sacred to the goddess Artemis, the debt was paid with the life of his daughter, Iphigenia. 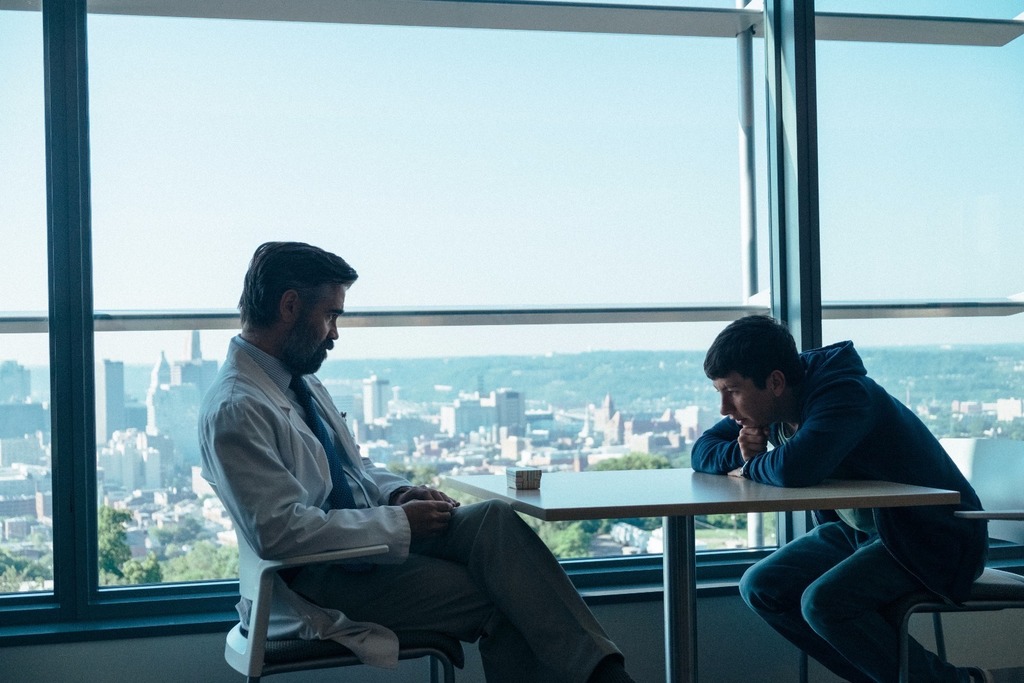 Greek director Yorgos Lathimos’ latest offering, following his cult hits Dogtooth and The Lobster, hovers at a tense thematic intersection of his former features. The Lobster took recognisable characters and threw them into an alternate universe; Dogtooth’s clout came from an unflinching examination of a dysfunctional family unit, imbued with the weirdness of the ‘real’. Sacred Deer borrows the magical thinking of The Lobster and muddles it with Dogtooth’s forensic attention to detail – at least, as far as human inconsistencies are concerned. 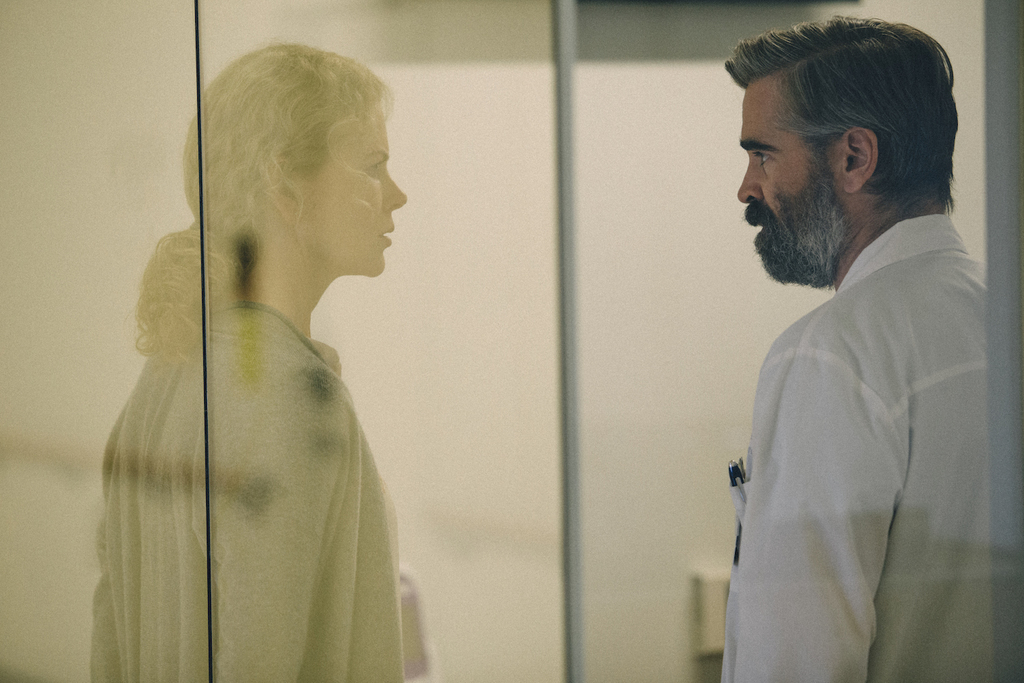 Open with an open chest cavity. Sacred Deer begins with a beating human heart under a surgeon’s knife, gloved and busy hands flitting in and out of the wound. There’s something chilling about the incorrigible rhythm of a pulse, the fragility and consistency of an organ we know beats inside our own chests. Within us all, a heart. Within us all, the capacity to stop another’s. For cardiologist Steven (Colin Farrell), this truth is closer to the surface than for most; it is his hands we see in surgery, his bloody gloves we see tossed into a medical bin, and his story we follow as we leave the hospital together. 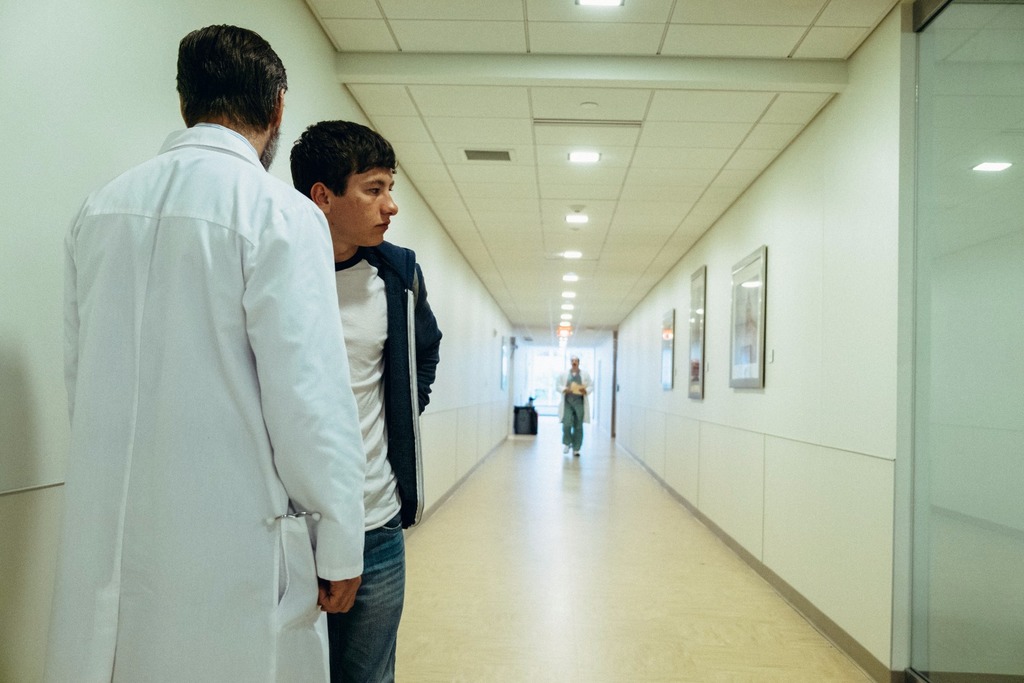 Steven lives an idyllic (if stilted) life, with his wife Anna (Nicole Kidman), teenage daughter Kim and younger son Bob. He meets regularly with a teenage boy, Martin (Barry Keoghan), whose significance is deliberately left ambiguous, until it isn’t. The film’s script and Lathimos’ direction gives its dialogue an uncanny air – it’s nearly right, but not quite. Conversations are robotic, vocal inflections flat – and so when Martin explains that Steven has to choose a member of his family to kill, it takes a moment to catch up. There are three stages, he explains. One at a time, Anna, Bob and Kim will lose the use of their legs. Then, they will refuse food. Lastly – and this signals the end is nigh – they will bleed from their eyes. It sounds like a curse, the power of fate coupled with the rule of three, especially when Martin explains that there is only one way to halt its path.

Conversations are robotic, vocal inflections flat – and so when Martin explains that Steven has to choose a member of his family to kill, it takes a moment to catch up. 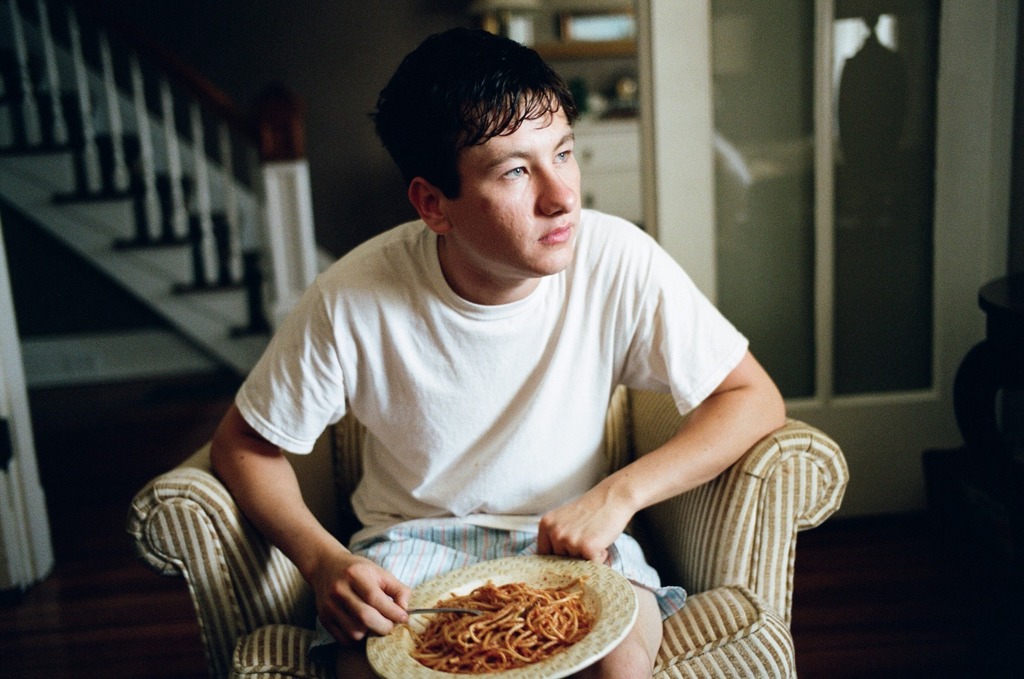 Steven is furious, confused, terrified. As a man of science, he holds no truck with what he cannot understand or see – and yet, Martin’s threat seems to be coming true. All medical tests come back clear, but the children drop one after the other, first bedbound and then appetite-less, beneath the ruthless consistency of what Martin calls ‘justice’. While there is no scientific logic to what is happening, both Steven and the viewer understand a primal and emotional cause-and-effect at work. It sounds like a Greek myth (it is) or a morality tale – an eye for an eye. When we are small, we learn about the world we’re growing up in through stories like this. There are direct consequences for bad behaviour; the good prevail; life is fair. When applied to the ‘real’ world, the moral ambiguity and anguish of this semi-biblical lore is excruciating. Think of the worst thing anyone’s ever done to you, and what you feel they deserve. Think of the worst thing you’ve ever done, and imagine the corresponding punishment. 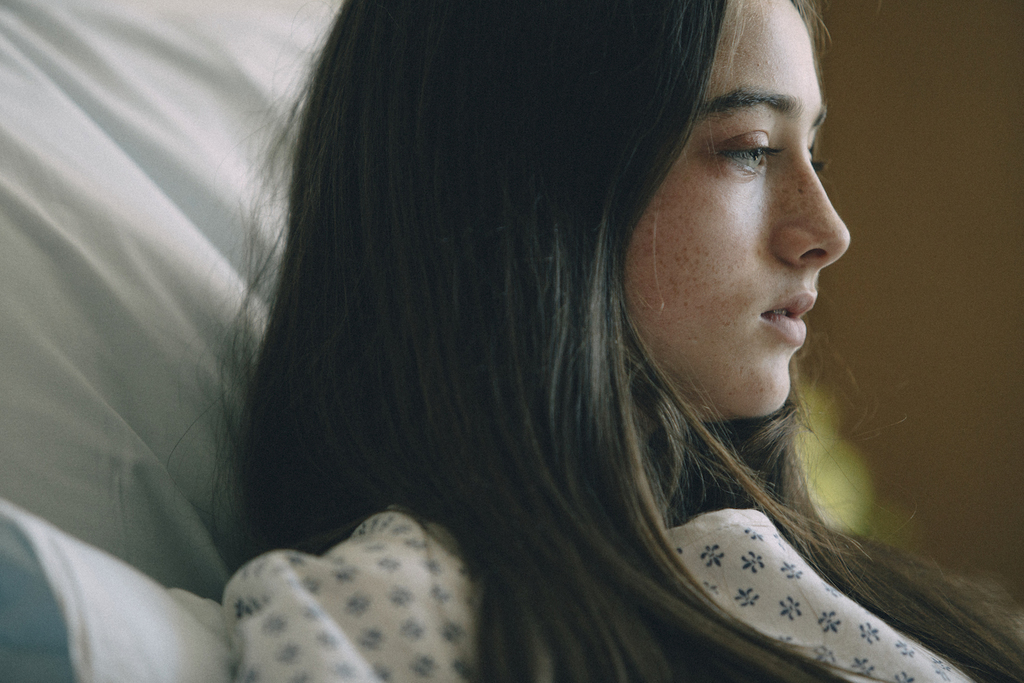 Terrifying, isn’t it? That’s what courts and judges, due process and criminal sentencing are for; left to our own devices, we are brutal. Martin’s power in Sacred Deer verges on supernatural, although part of the intrigue lies in unpicking the series of events as a kind of mass hysteria – especially considering teenage Kim’s infatuation with her assailant. At one point, in the midst of paralysis and on the phone to Martin, she stands up and walks to the window. When he hangs up, she falls down. It’s worth noting that, although Steven’s wife Anna is included in the curse, she never succumbs to even its first stage. There’s plenty of fascinating scientific evidence that what we call ‘curses’ work – that is, as long as the cursed person believes in their power. It’s not surprising when you consider the placebo effect, or accounts of psychosomatic illness.

At one point, in the midst of paralysis and on the phone to Martin, Kim stands up and walks to the window. When he hangs up, she falls down. 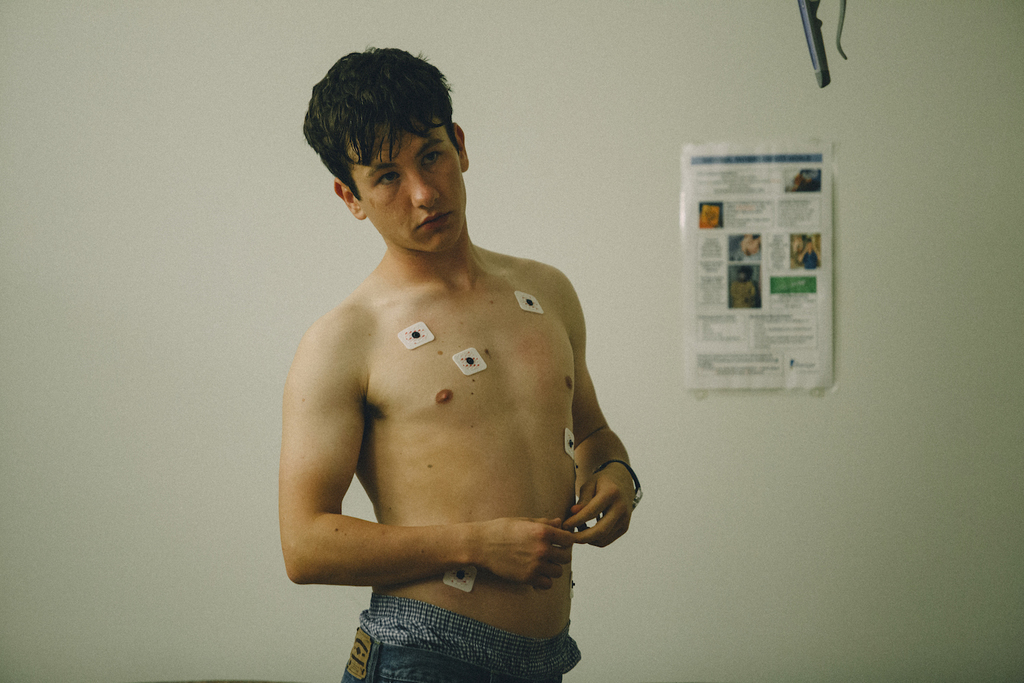 As the situation becomes more desperate, Steven kidnaps Martin, tying him to a chair in the house’s basement. He rails and screams for him to stop what is happening, but Martin explains that he is in the grip of something larger than himself. Whether he wants to intervene or not, justice dictates that Steven must lose what Martin has lost. To illustrate his point – and boy, does he make himself clear – Martin sinks his teeth into Steven’s arm, coming away with a chunk of flesh and blood around his mouth. How to resolve the hurt? Martin turns his head awkwardly to his arms tied behind his body, and tears away a mouthful of his own skin. It’s only fair. Meanwhile, Steven’s bedbound children begin to understand the choice he has to make. Bob drags himself on his arms to tell his father he wants to be a cardiologist, too, and that he’s on his way to water the plants. Kim – perhaps aware that her complicity in Martin’s plan mean she should be the one to die – makes a bid for freedom, hauling her body along suburban streets in the dark until her knees are ripped to shreds. 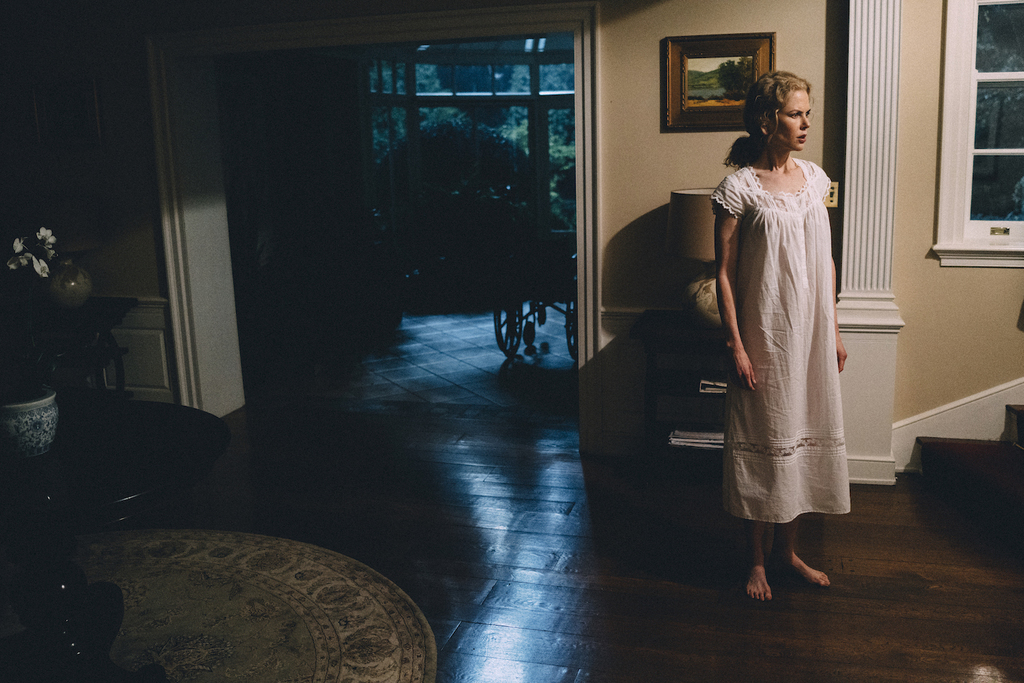 Kim tore her jeans, and Iphigenia would have ruined her toga. No matter what we’re wearing, though, or which era we’re inhabiting, we are pretty static. The trappings change, but – fortunately or unfortunately – what lies beneath shifts very little. It’s easy to think of people living thousands of years ago as something like another species, but four millennia passes in the blink of an eye and here we are, says Lathimos, grappling with the same old questions. Sacred Deer references a pre-Christian civilisation with its titular myth, in turn drawn from far older stories stretching back to the beginning of recorded history. The reminder that ‘it was ever thus’ is not a comforting one; with or without an absolute morality, we still have human nature to contend with. Rules enforced to constrain it can only ever be approximate, inflexible against our malleability, black and white against our grey. I won’t tell you who Steven kills (not because it doesn’t matter, although it’s not the point); the question is, how should he choose? We didn’t know then and we don’t know now – but decisions need making nonetheless.

The Killing of a Sacred Deer was released in the UK on November 3rd.