At the Gallery of Everything, something incredible is unfolding. Hovering between residency and marathon, artist Bob Parks embodies and inhabits his exhibition – the first commercial retrospective in his 40-year career – performing daily throughout Frieze week and every Sunday afternoon until November 12th.

There erupted, and still exists, a profound and pulsating spirituality in Parks’ work, both in the ecstasy of his performance pieces, and later, in his paintings. 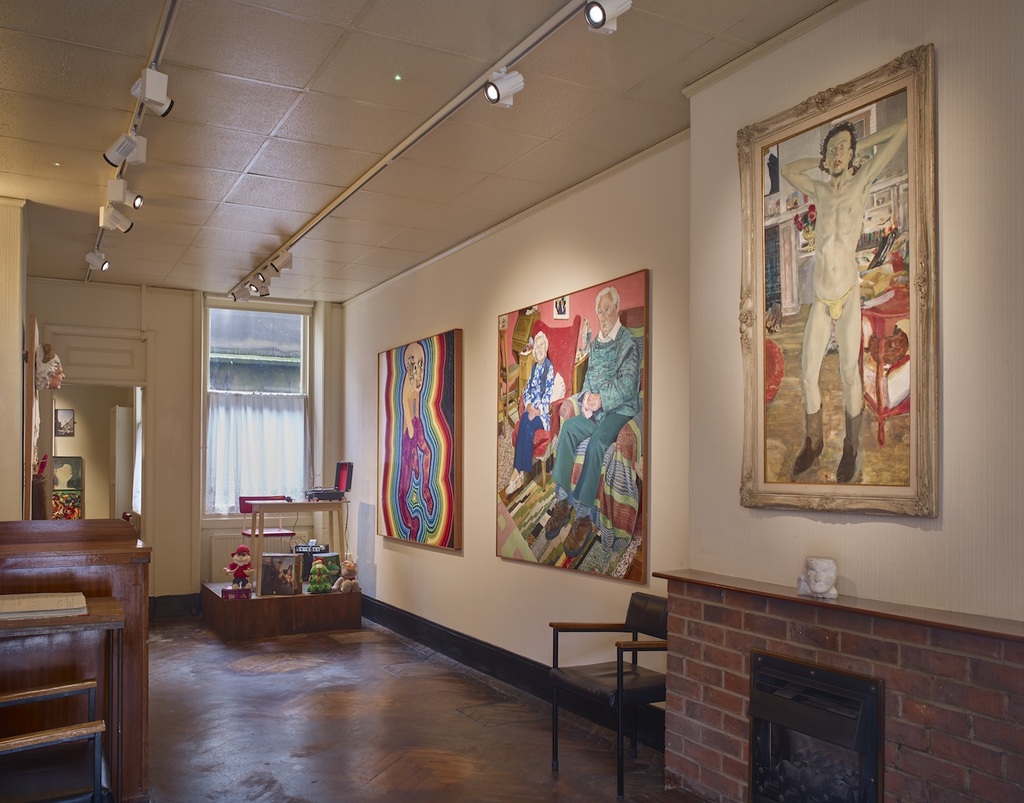 At 70, Parks’ oeuvre is mind-blowingly expansive – and varied. Known amongst one sector of devotees for his provocative performance art which flourished in 70s LA, Parks roamed the city in a string bikini as a gesture of solidarity with the feminist movement, named ‘The hypocrisy of clothed men, painting naked women in Renaissance times, behind closed doors.’ Quite. In this particular performance, Bob became his own model and muse, and so it seems a fitting place to begin the consideration of a man who has lived art, doggedly, feverishly and earnestly, all his life.

‘The hypocrisy…’ was one incarnation of Parks’ alter-ego Bignose (reprised here in 2008), a character keen on rituals and prone to choreographed seizures and fits of screaming on the street, or MacDonalds, or galleries, or anywhere such an entity might wander. The distinction between Bignose and Parks himself might seem clear on paper, although it’s anything but decisive. The former was birthed from and into the latter after Parks studied Stanislavski at Lee Strasbourg Theatre Institute and Actor’s Studio, and his fusion with the pseudo-fictional version of himself allowed an expression of something greater than the sum of its parts. The argument goes, I suppose, that there is a Bignose in each of us. More than that, we are that part of ourselves which would collapse shrieking, sing at the top of our voice and tear our clothes off if only permission were granted. Bob’s onto something, and he might attribute it to his time with the Starlight Church for God in Christ, with which he became involved around 1974. It was an encounter which would profoundly colour his life and career: there erupted, and still exists, a profound and pulsating spirituality in Parks’ work, both in the ecstasy of his performance pieces, and later, in his paintings. 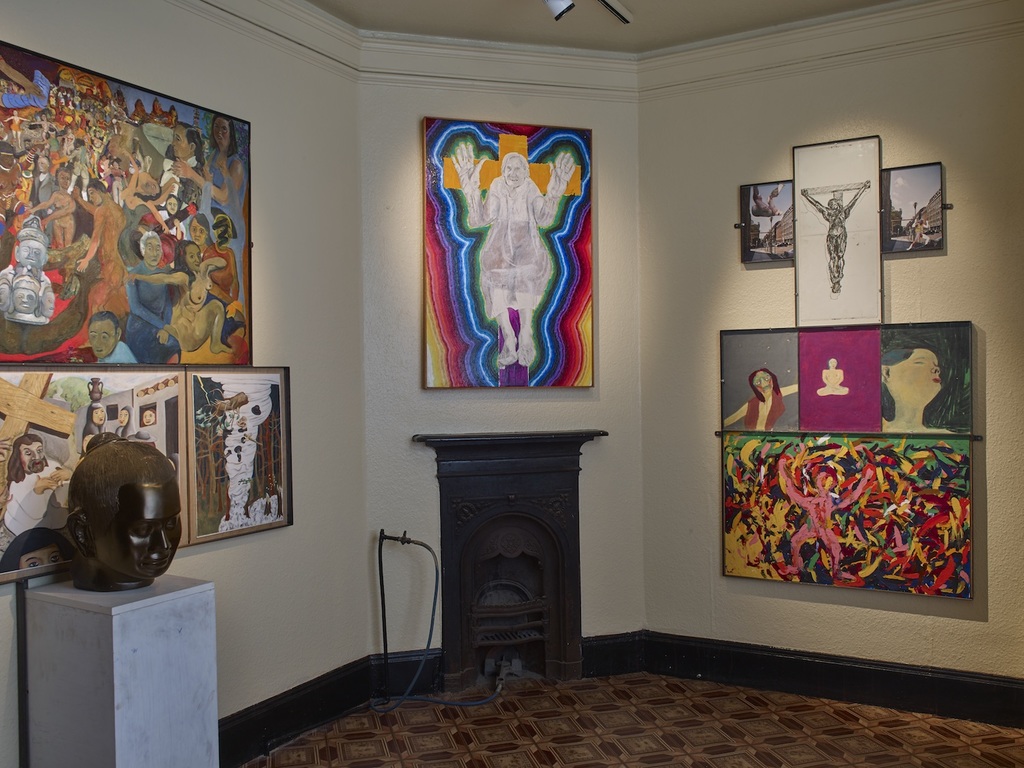 Back in LA, where he’d moved from the UK’s Southhall with his wife in 1972, Parks was making a name for himself. A contemporary of Chris Burden (who asked a studio assistant to shoot him in the arm with a rifle), Barbara T Smith (who stuck herself to the walls of her gallery with electrical tape) and Paul McCarthy (famed for painting his naked body with ketchup, for art’s sake), Parks’ early work had the context of radical performance in the air to buoy it clear of censorship and into the realms of critical acclaim. He exhibited at shows in Australia, Europe and the UK; yet – following a divorce and a few troubled years – Parks returned home to Sway to live with his parents. Despite the intervening decades of obscurity, Parks has never faltered in his life-long impulse to make, embody and create. His exhibition at Gallery of Everything holds a cornucopia of his pieces on canvas, created in the most part after his move back to England. Many of them depict people close at hand – Parks himself, his parents or members of his congregation – and enact a friendly foil for the high-octane performance he was crafting in LA.

There’s ‘Mum and Dad’, 1984. There’s ‘Bob’, 1987. Parks has spent his life working menial jobs to supplement his creative practice, and the ‘real world’, as it were, has proven no less of a muse than the spiritual heights of LA’s gospel scene. Sometimes, the two collide, as in ‘Mum on the cross’, 2010, an image in which Park’s elderly mother grins out at us, spectral in white and grey against the psychedelia of a luminous orange crucifix ringed by all the colours of the rainbow. This is Marjorie: a pivot and a touch-stone for the artist throughout his life. He cared for her until her sudden death in a car crash, in which Parks himself was the driver. Her death, though seismic for Parks, ushered in a new era of his artistic career. A flurry of creativity and a renewed clarity has seen Parks exhibited at London’s ICA, Birmingham’s Grand Union and, now, in Marylebone. In The R&B Feeling, a film profiling Parks and his work released in 2016, he discusses the chronic anxiety which plagued much of his adult life. His mother, before she passed, promised to take it with her when she died; the power of belief is awe-inspiring, and it seems that Parks took her at her word.

Despite the intervening decades of obscurity, Parks has never faltered in his life-long impulse to make, embody and create. 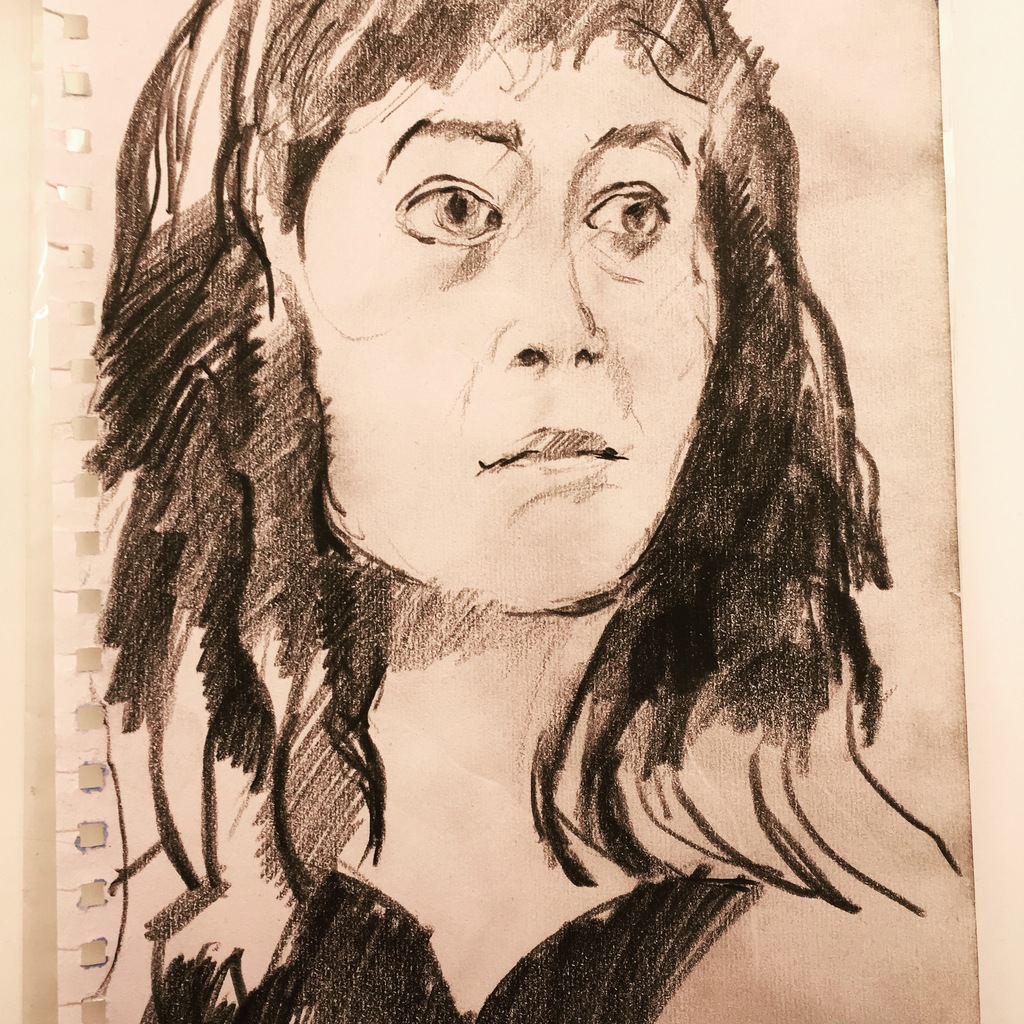 Parks’ is a life – like anyone’s – in which chaos and order, happiness and misery, battle for precedence. What’s remarkable is his means of processing the struggle, and the incorrigibly generative nature of that duality. There is the universal and the minute, the sublime and the quotidian to compel the viewer to find themselves in his work, as well as enact an intimate encounter with the artist who made it. Whether he’s performing or painting, Parks renders the world precisely as it feels (if not, necessarily, as it looks). There’s a qualia to much of his work, i.e., a quality like a smell or a taste which needs to be experienced to be understood. I’ve never seen anything quite like it.

The exhibition is called The Bob Parks Life-Story Show, and that seems apt on two counts; characteristically for Parks, there’s clarity in the title’s ambiguity. As a retrospective, it is a story of the artist’s life. As a body of work generated by a lifetime spent studying human beings and everything their humanity entails, it’s a story for and of us all, a zooming out enacted by a crazy zooming in. I met the man himself this week – he drew my portrait (above) and performed Stand By Me (below): the song he sang at his mother’s funeral. Something old, something new. Following a career spent mostly below the radar and the poverty line, Parks is back; I hope he sells the walls empty.