‘Black British history is not merely a theme for October’ — so reads The Black Curriculum’s manifesto, and yet, and yet. When the campaign group requested to meet with education secretary Gavin Williamson back in June, they were rebuffed on the basis that the curriculum is ‘already incredibly diverse’. At the time, global mass demonstrations were being held following the death of George Floyd. Academy Award-winning director Steve McQueen dedicated new anthology series Small Axe to Floyd’s memory, and to ‘all the other black people that have been murdered, seen or unseen, because of who they are, in the US, UK and elsewhere.’ 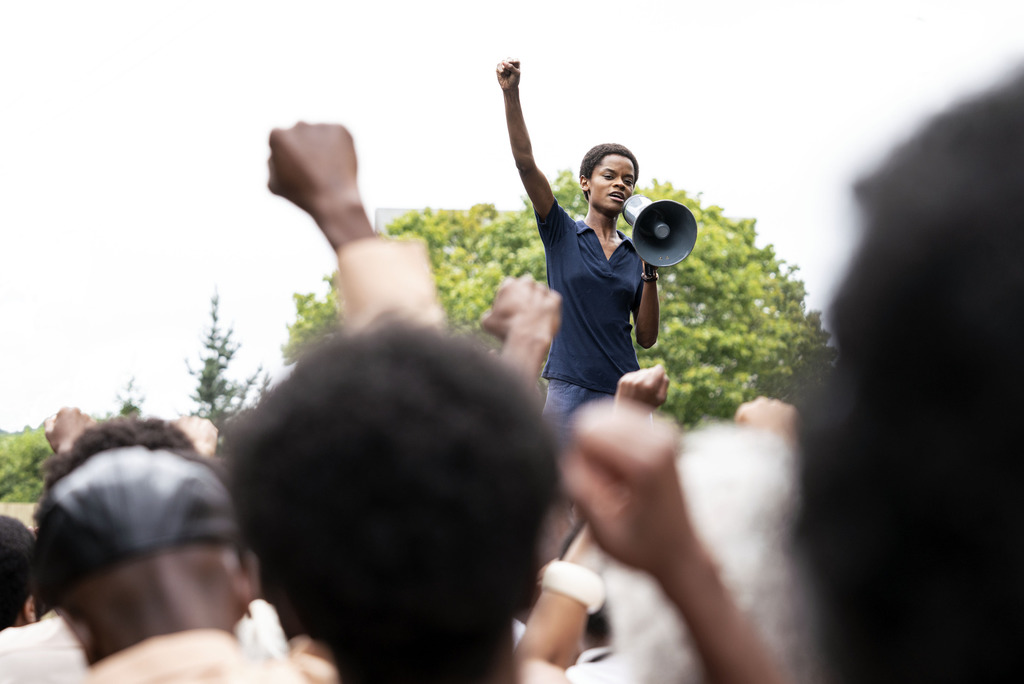 Seen or unseen: with Small Axe now appearing on the national broadcaster’s flagship channel (following a run on the festival circuit) I can imagine viewers of Caribbean descent might experience the thrill of representation, while other viewers — myself among them — might discover a history excised from those ‘already incredibly diverse’ textbooks.

Small Axe takes its name from an African proverb popularised by Bob Marley’s 1973 song: ‘If you are the big tree, we are the small axe.’ In other words, small but sustained action can topple even the most powerful. Mangrove is the first of the five films out of the gate, perhaps because it most explicitly dramatises this ‘we’, a community based around the supposedly safe haven of a restaurant in Notting Hill that would become a symbol of resistance to police persecution.

"If you are the big tree, we are the small axe" 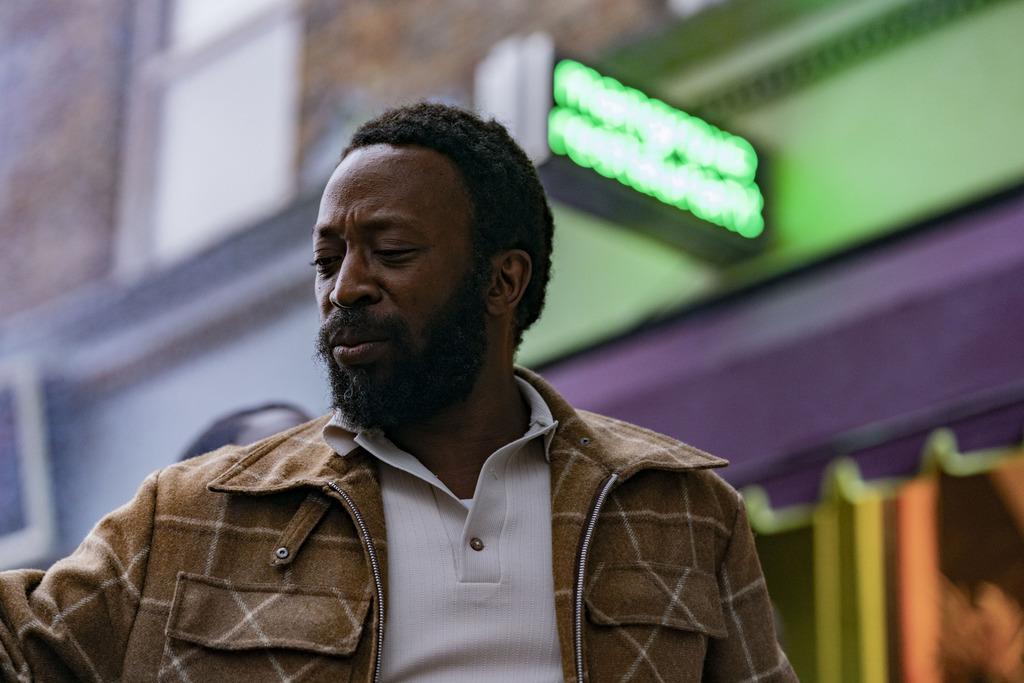 Mangrove tells the true story of Frank Crichlow (Shaun Parkes), a Trinidadian man whose restaurant became a meeting place for other West Indians to meet and eat, among them activists Darcus Howe (Malachi Kirby) and Altheia Jones-LeCointe (Letitia Wright, Shuri from Black Panther, here playing an actual Black Panther). We meet the latter on the factory floor, encouraging a group of South Asian men to unionise. 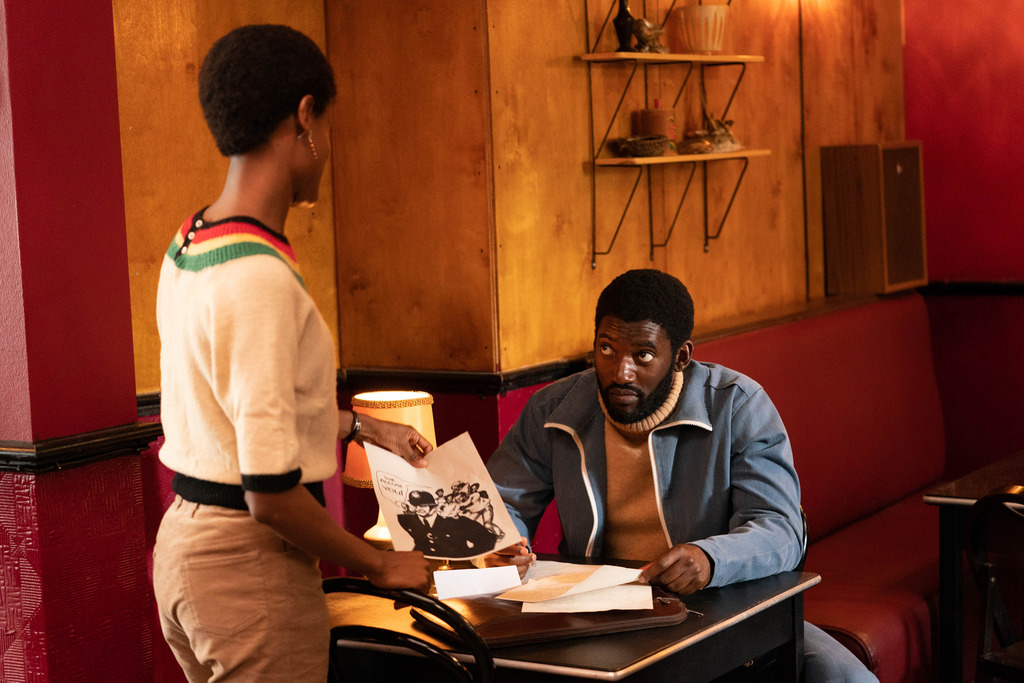 The moment is neatly intersectional, showing us the shared struggle of South Asian and black communities (a thread picked up in episode three: Red, White and Blue). I wonder if Jones-LeCointe’s dialogue in particular might seem overly expository or patronising to some ears (‘the virtue of lending your voice to collective bargaining is that together we become stronger’); on the other hand, since it’s the first time many will be hearing her name (again, myself included) maybe a pedagogical, expository tone is required. 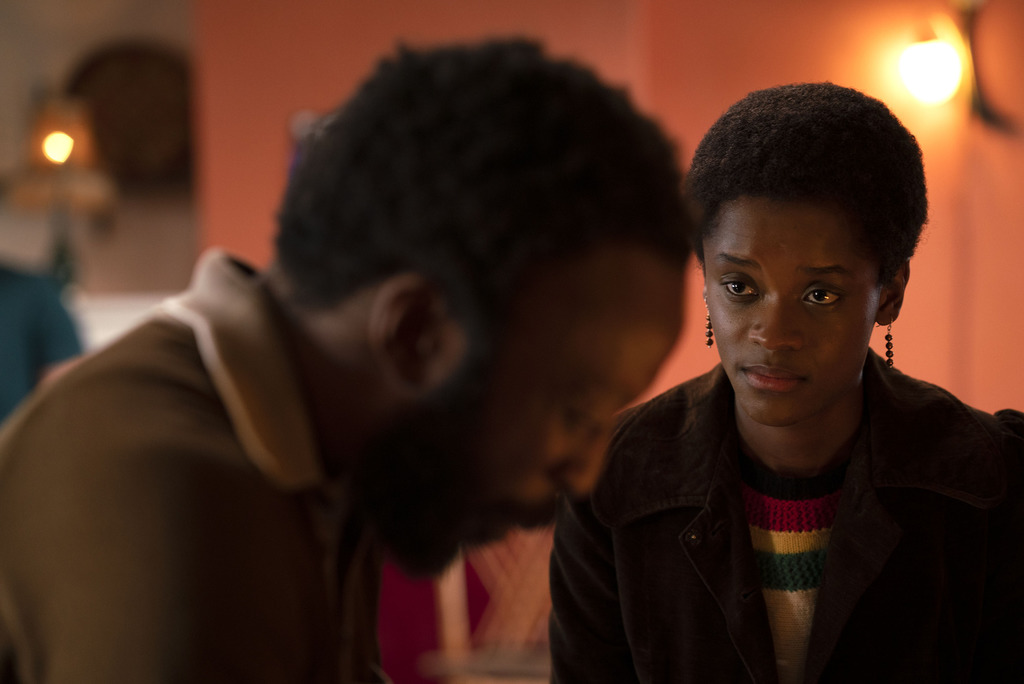 For the most part, McQueen does a stunning job of shouldering the burden of representation, making stories of national importance personal, human, and unapologetically cinematic. We track Frank as he walks through Notting Hill in 1968, past children jumping on dumped mattresses and pushing each other around on abandoned office chairs, sparks dropping from the vast Westway just being built, and past blue hoarding conspicuously reading ‘POWELL FOR P.M.’ — this being the year he gave his ‘rivers of blood’ speech, inflaming xenophobia and racial tension. 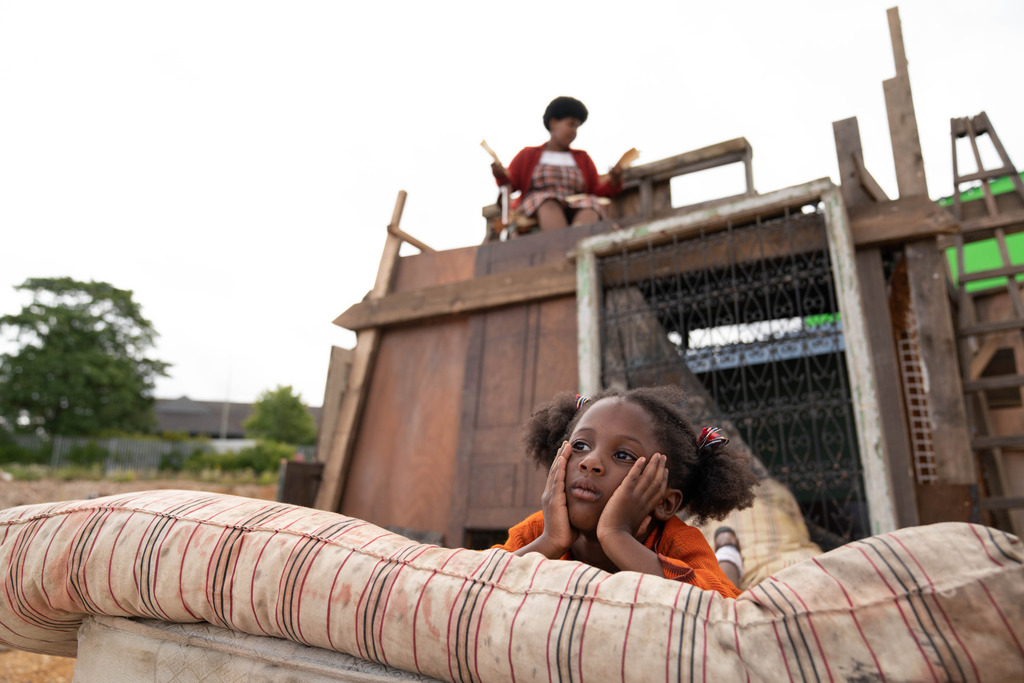 The situation seems tense enough without Powell fanning the flames: Frank’s Mangrove restaurant is soon raided by one PC Pulley, who harbours a personal, racist vendetta. In fact, the premises were raided over 12 times between 1969 and 1970, and on spurious grounds. On 9 August 1970, 150 people marched to the local police station in protest. 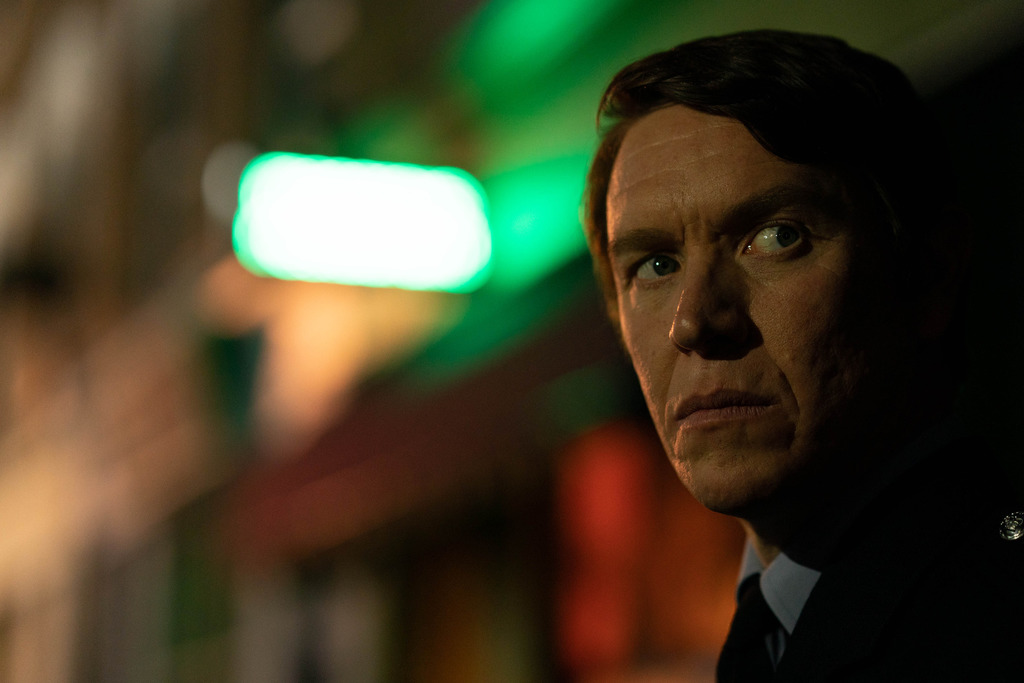 The peaceful march turns violent when the protestors meet police. McQueen’s camera lingers with signature, unflinching proximity, sandwiching you between placards and riot shields and bodies in the fray. Nine are arrested for ‘inciting a riot’, and Mangrove pivots into a courtroom drama, where Kirby and Wright get a chance to shine. Both actors are composed and galvanised playing Howe and Jones-LeCointe respectively, who both represented themselves in this landmark trial at the Old Bailey. Lingering shots of the Neo-Baroque domed ceiling suggest looming, institutional authority — the ‘big tree’. 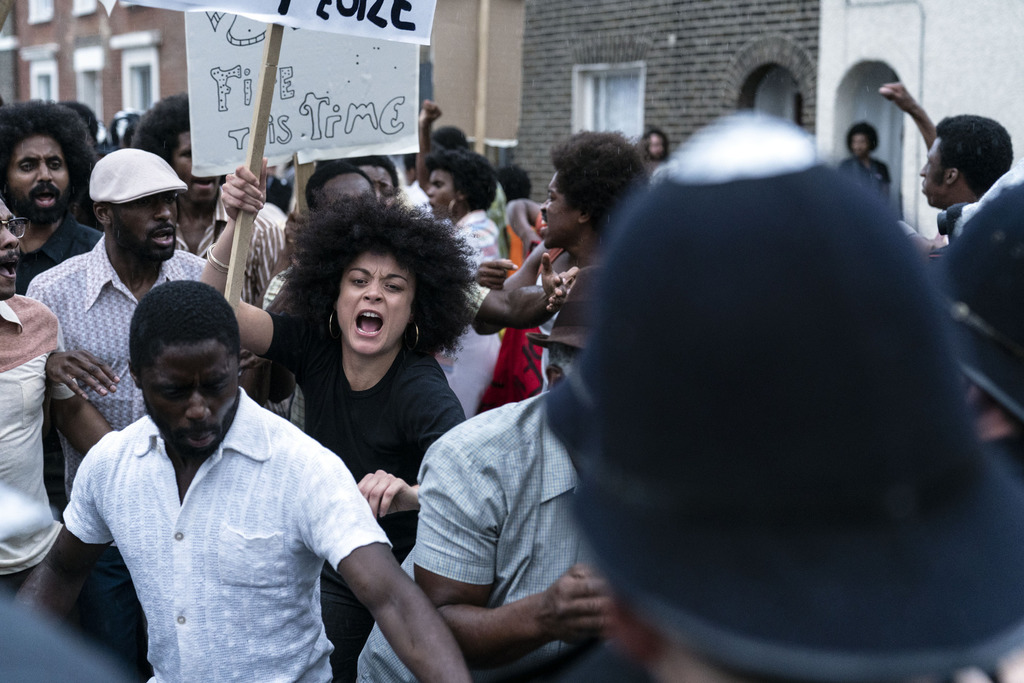 "McQueen’s camera lingers with signature, unflinching proximity, sandwiching you between placards and riot shields and bodies in the fray" 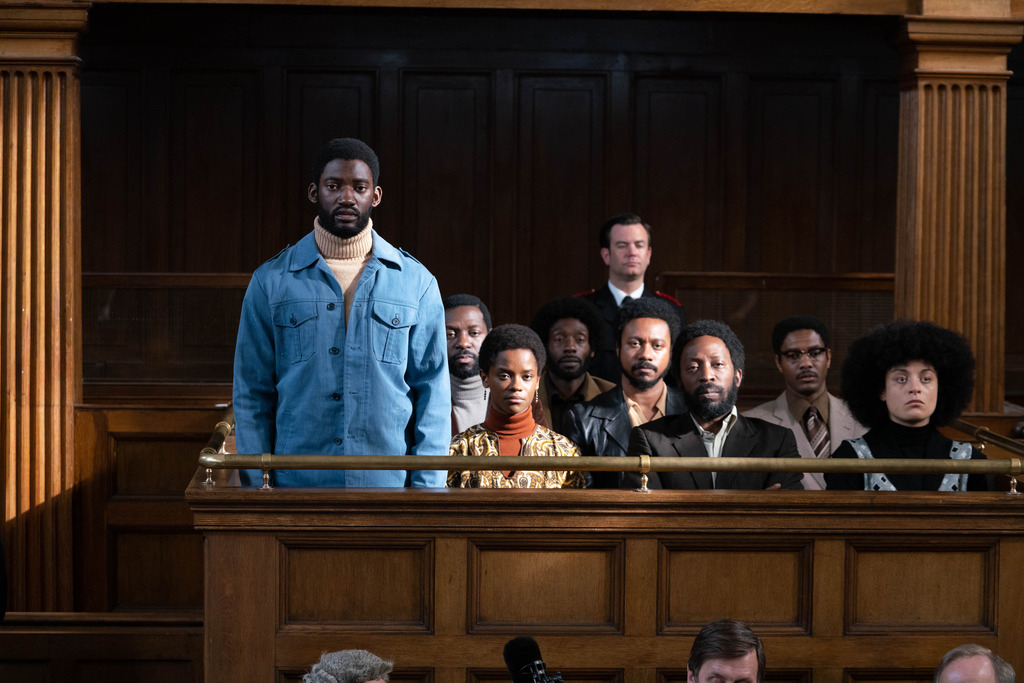 McQueen’s visceral filmmaking will likely have you hissing at your screens, particularly during the scenes of constant police harassment; however, as much as Small Axe doesn’t pull its punches, it has a lot of heart. ‘No weak heart / Shall prosper,’ sings Bob Marley in ‘Small Axe’, continuing biblically: ‘whosoever diggeth a pit / Shall fall in it’. McQueen doesn’t fall into the pit of oversimplifying complex human experience and race relations; rather, Small Axe is an intimate portrait of the post-Windrush era between the 1960s and 80s – a vivid-grainy one, too, shot on 35mm film. 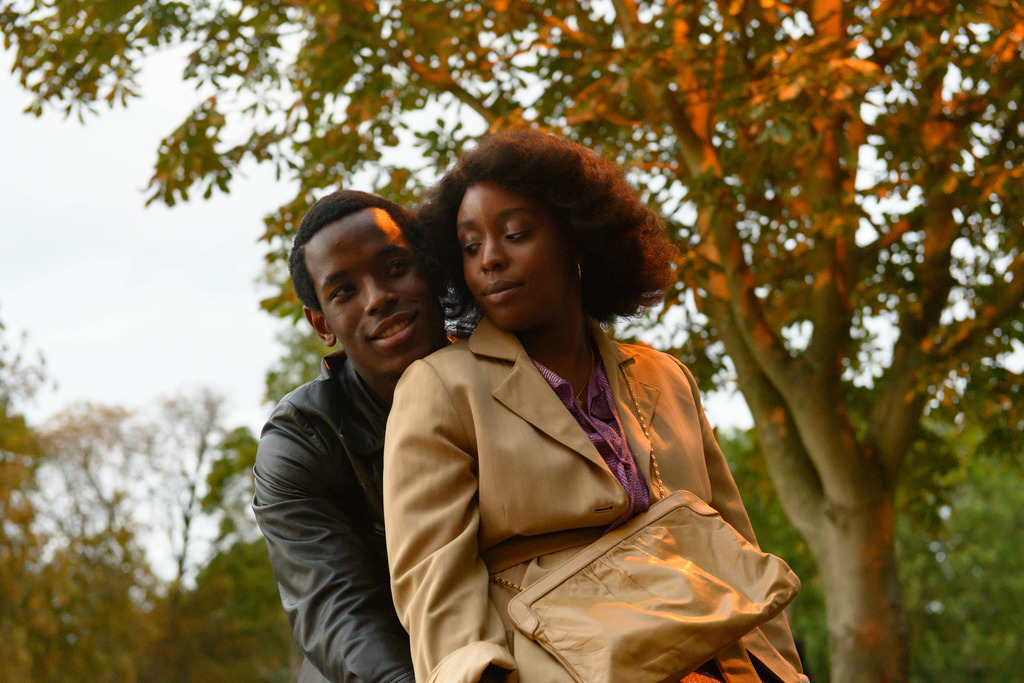 In episode two, Lovers Rock, this becomes all the more apparent: a swooning mood piece, the closest McQueen has come to a ‘hangout movie’, the camera weaving its way through revellers at a ‘blues party’ — a staple of West Indian immigrant life in England in the 70s. As the night goes on, the air gets thick with sweat, weed and home cooking; a trance-like, extended acapella rendition of Janet Kay’s ‘Silly Games’ is a tonic for those missing the fleeting ecstasy of communal experience. 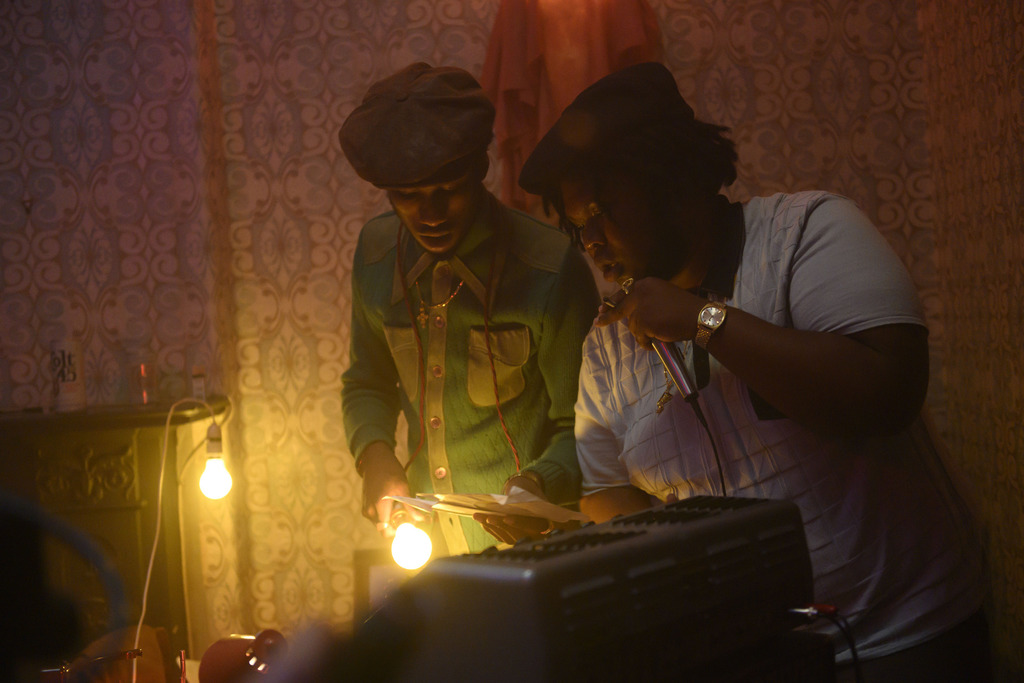 "a trance-like, extended acapella rendition of Janet Kay’s ‘Silly Games’ is a tonic for those missing the fleeting ecstasy of communal experience"

Nothing, and everything, happens — true to the charged blur that is an all-nighter: hook-ups, frissons, mounting testosterone, narrowly averted disaster. A slenderer film at 68-minutes, the harsh Sunday morning light encroaches before you know it, even as the bassline of ‘Kunta Kinte Dub’ by The Revolutionaries continues to reverberate in your sternum.

What cinema does more effectively than any textbook is make histories felt. ‘For history, as nearly no one seems to know, is not merely something to be read’, James Baldwin said. ‘And it does not refer merely, or even principally, to the past. On the contrary, the great force of history comes from the fact that we carry it within us, are unconsciously controlled by it in many ways, and history is literally present in all that we do.’ 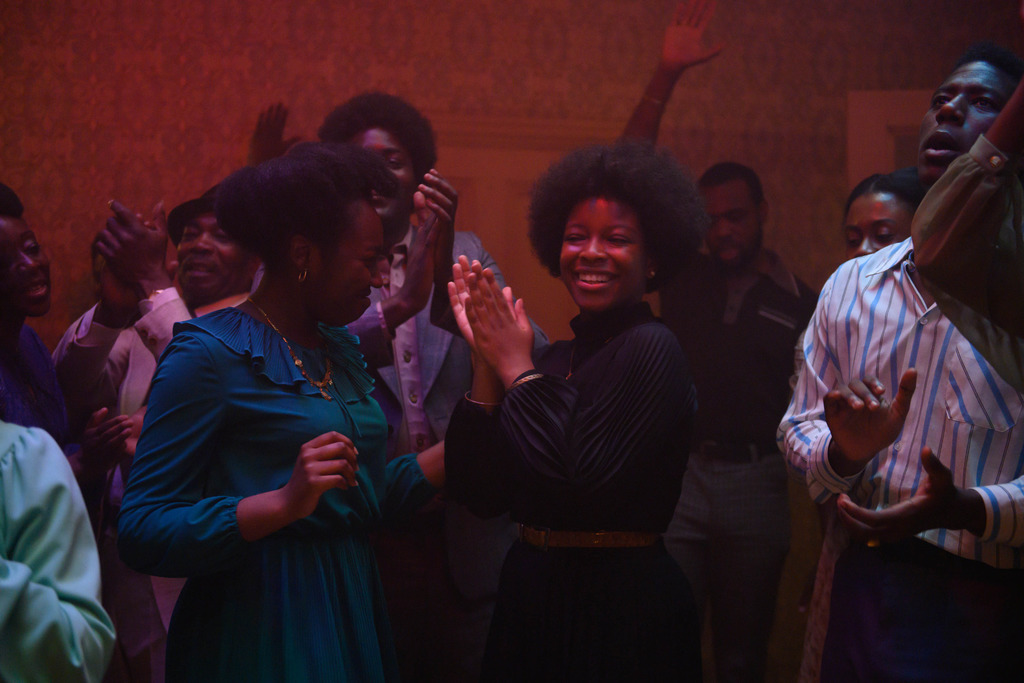 It’s sad to see McQueen’s themes of racial inequality and structural injustice still so present in the state of affairs in the world today. Yet, with its fervent, passionate, and sensuous roaming through Britain’s not-so-distant past, Small Axe, is so much more than a much-needed history lesson: it’s a masterpiece.