The Art of Not Giving a Fuck

Was there ever an image more 2022 than Raphael’s circa 1507 painting of Saint Catherine? She’s in a Get Ready With Me TikTok colour-blocking ultramarine with lead-tin yellow. She’s giving rich white lady, giving banquet at the doge’s palace, and she’s casually leaning on her Catherine wheel. She’s in her Peggy Lee era – ‘Is that all there is to a martyrdom?’ Commonly, when torturing a convicted person by this method, the executioner would drop the breaking wheel on the shinbones and then work his way up to the arms. But Catherine doesn’t care. She woke up like this.

"Is that all there is to a martyrdom?" 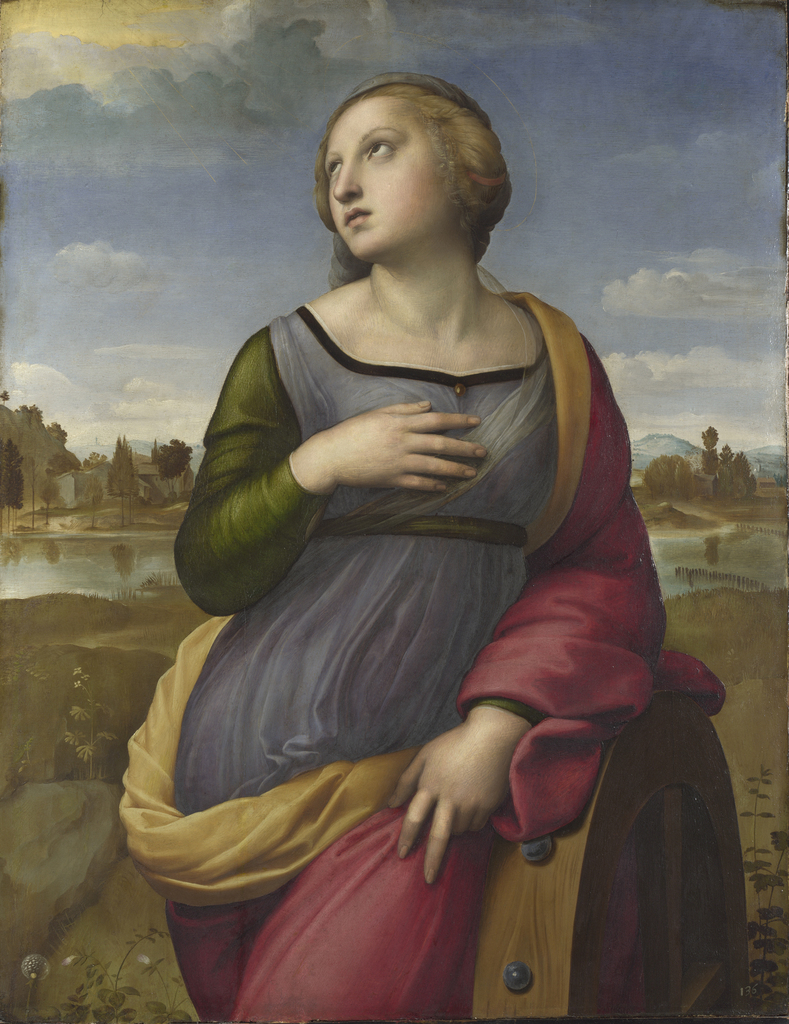 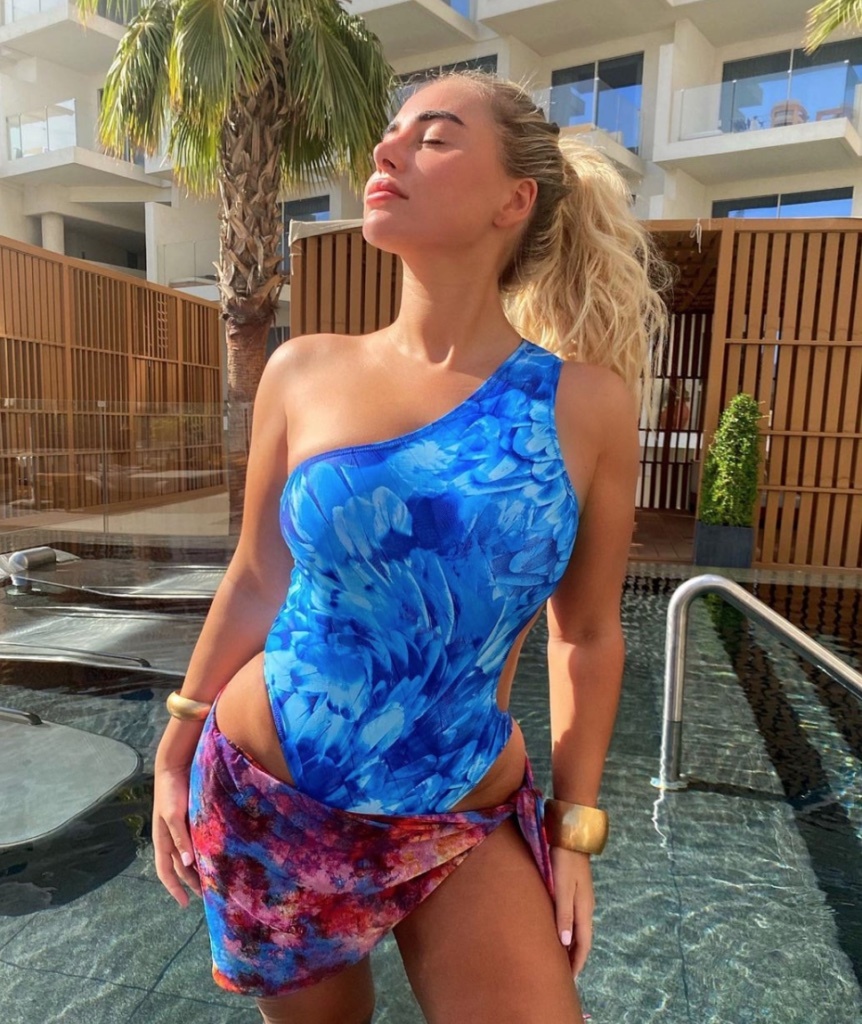 Walking around the National Gallery’s Raphael exhibition after the hottest day on record in the UK, everything is cool, and it’s not just the aircon. It’s the way Raphael does light, the way he paints flat, expansive landscapes like some part of southern Europe that’s not subject to freak, deadly wildfires. Even the crucifixion looks painless as an ad for DIGNITAS. Jesus hangs there, as if taking a load off. Lighter still are two cherubs on demi pointe on two tiny clouds catching the blood from Christ’s wounds in a bored-on-a-sommelier-course kind of way. 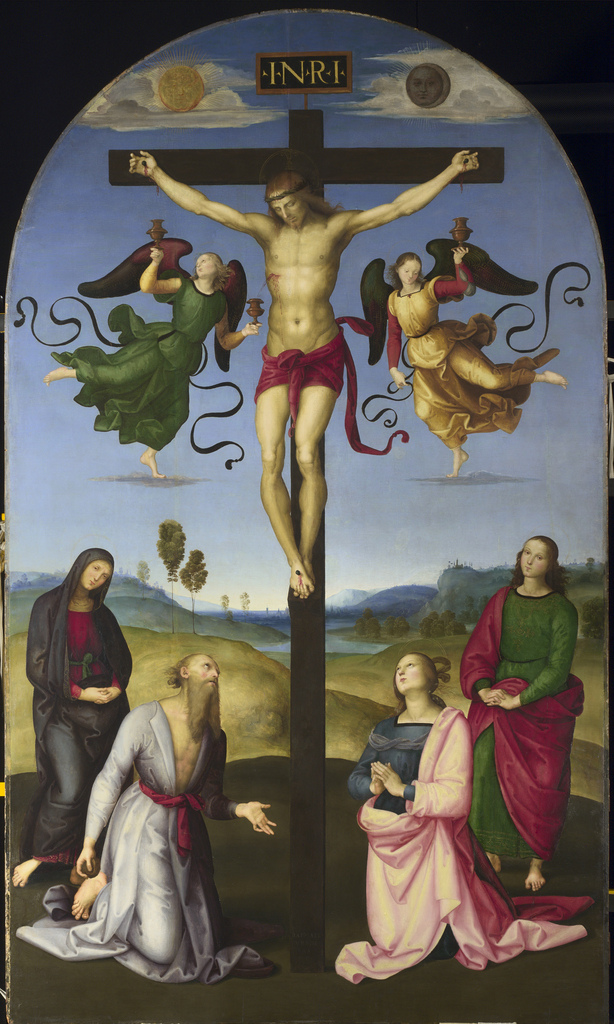 They might look bored, but don’t be fooled. By the time you’ve achieved a dewy minimal skin base, sunkissed blush and glassy-looking lips, your ‘makeupless makeup’ has used more paint than one of Raphael’s – point is, it looks like it used next to none. After all, isn’t life full enough of strife, effort, blood, sweat and tears? The planet’s on fire. The world’s at war. The gap between rich and poor keeps increasing. What are our leaders doing about it? Well, Raphael’s patron Pope Julius II grew a bohemian beard after he lost a war in Bologna; here he is, sitting on a chair rather than a papal throne! Humble? Humble brag is more accurate – he’s proper holier than thou even after political disaster. Speaking of which, what was it Boris said? ‘Them’s the breaks’. ‘Hasta la vista, baby’. ‘Let the bodies pile high’. 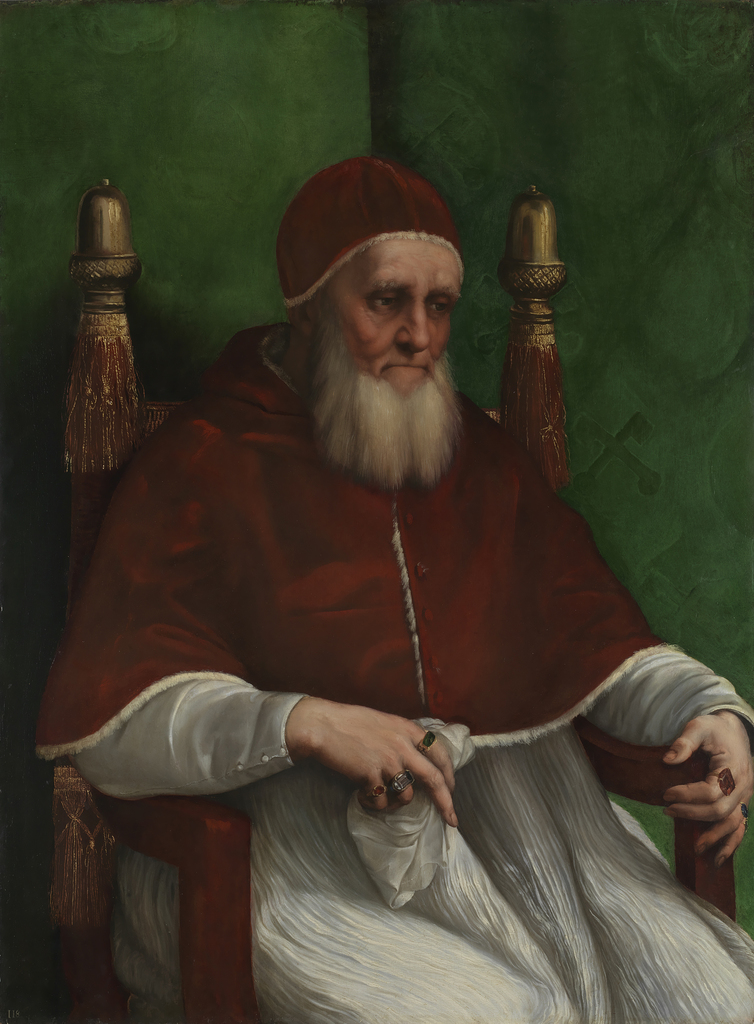 Anyway, Boris can say whatever he wants. No-one’s listening anymore, just like the congregation in Saint John the Baptist Preaching – that is, except the woman in the front row, more besotted than the fans who made the Harry Styles vomit shrine, completing a scene featuring more hands on hips and flowing fabric than a New York drag ball. Meanwhile, inside the National Gallery, a woman has set up an actual camping stool in front of one of the Madonnas and is concentrating so hard she might burst a blood vessel. Perhaps she’ll move on to John the Baptist and notice his acolytes just hanging out, really, not giving a shit. 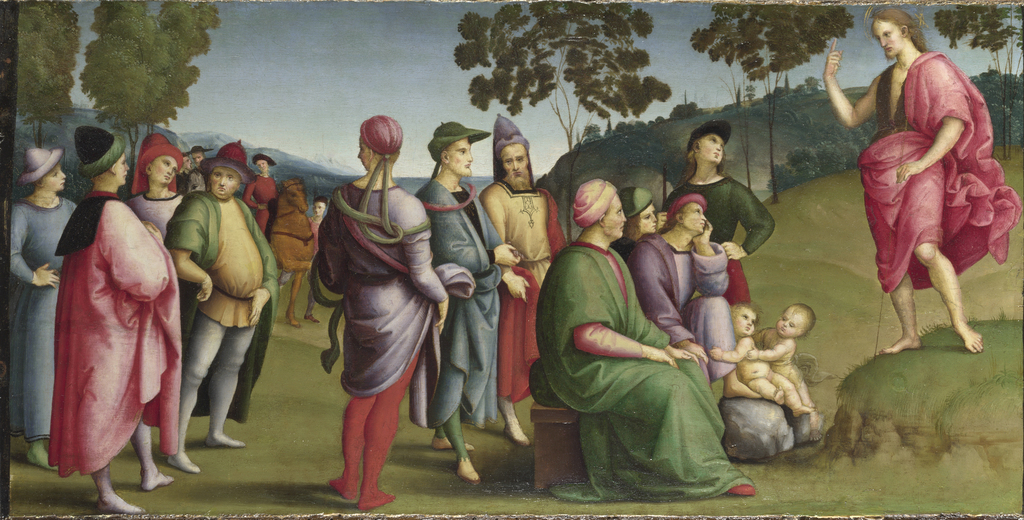 There’s an art to all this, and in the Renaissance court it was called 'sprezzatura'. Baldassare Castiglione’s 1528 Book of the Courtier defines it as ‘a certain nonchalance, so as to conceal all art and make whatever one does or says appear to be without effort and almost without any thought about it’. It’s the art of making things look easy. Idiotically, I said this recently to a thirteen-year-old who was giving me tips on TikTok marketing. ‘It can be quite hard to make things look like you haven’t put any effort in,’ I said. ‘No. Actually don’t put any effort in,’ she replied. Touché – a sprezzatura checkmate. 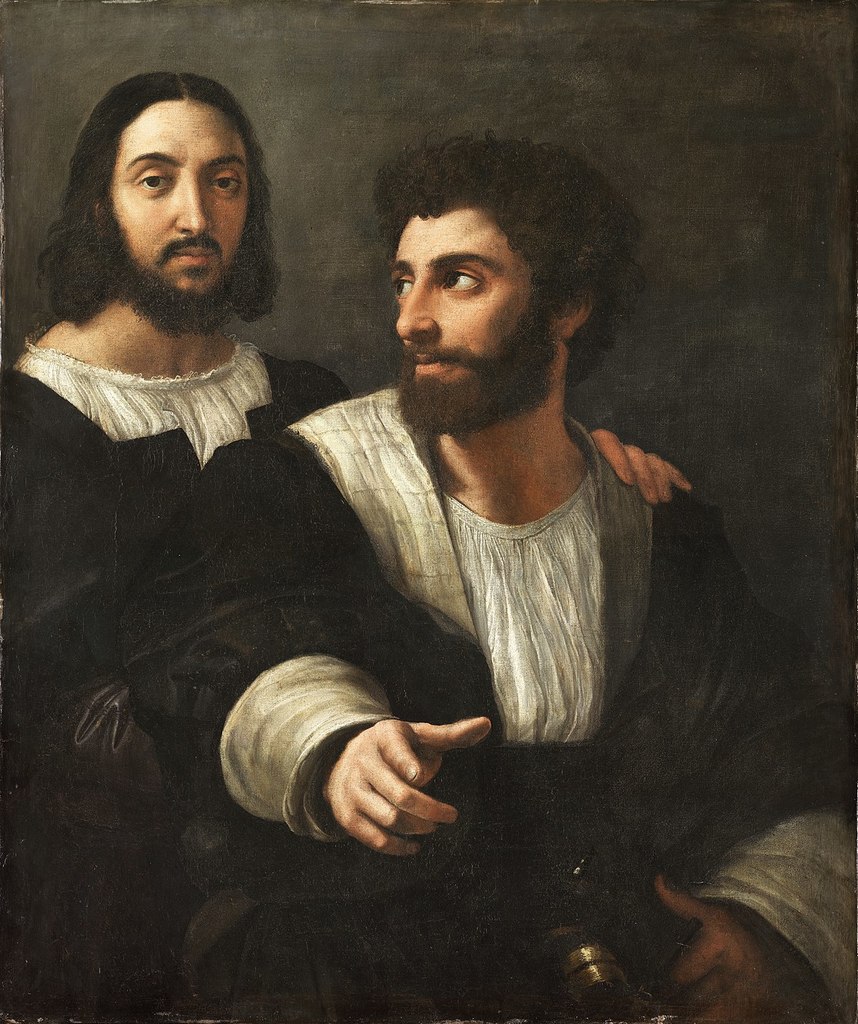 In Self-Portrait with a Friend, Raphael’s hand rests on the shoulder of his pal – thought by modern art historians to be his pupil Giulio Romano. Standing behind the seated figure, taller, more in charge, Raphael’s arm seems to disappear into the arm of his pupil, which points out towards the viewer – blurring the line between friend and puppet. Fitting, because art historians reckon that most of the painting was completed by one of Raphael’s pupils (talk about actually not putting any effort in, eh?) 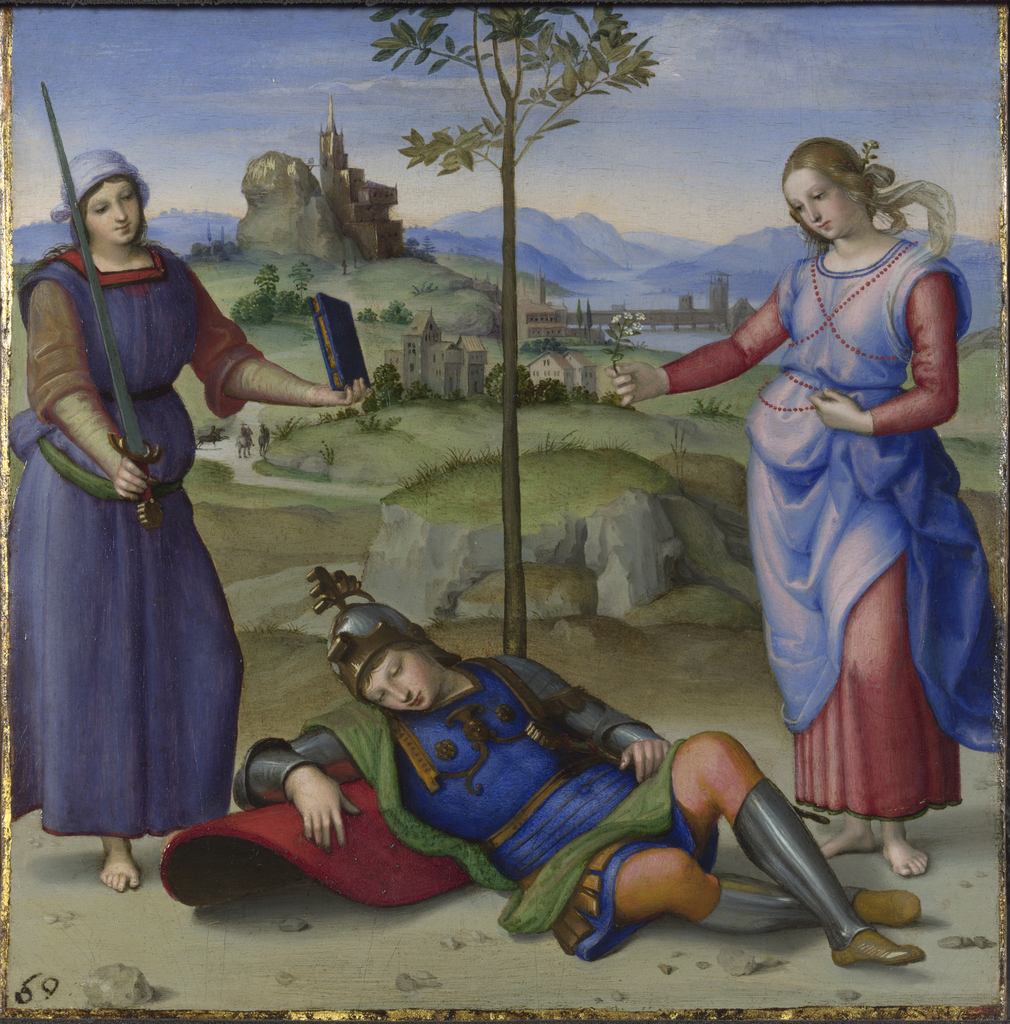 Cunning, deviousness and performance was part and parcel of the Renaissance court and sprezzatura went hand in hand with this culture of suspicion. With our own culture of decadence, short-sighted abuses of power, and lies – £840-a-roll wallpaper, disgraced princes, Partygate investigations, Tory leadership hopefuls threatening to scrap a raft of green policies – is it any wonder that looking-like-you-haven’t-put-any-effort-in feels à la mode? 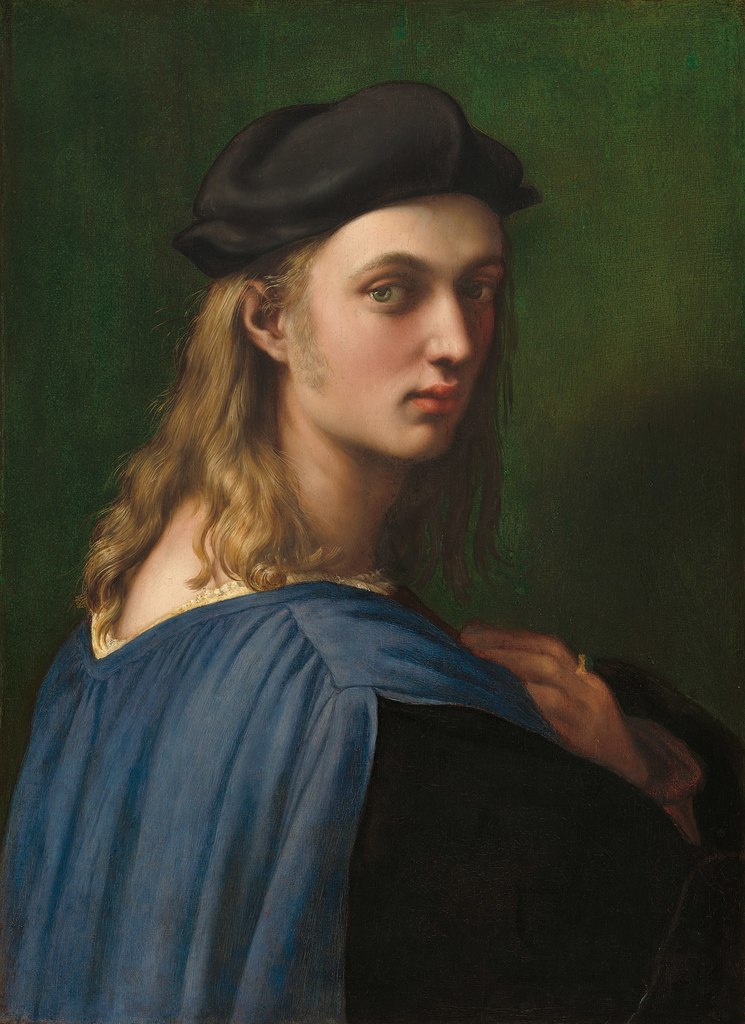 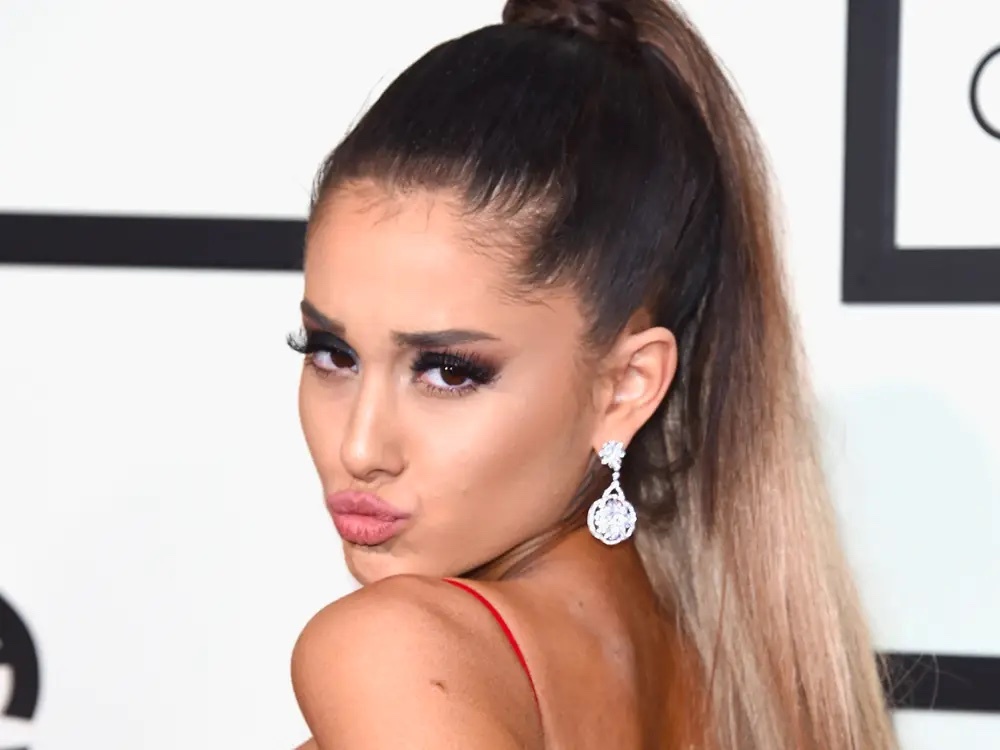 The reason sprezzatura has become cool again is because it’s such a difficult concept for anyone over the age of eighteen to get their head around – when you graduate into legal adulthood in the UK, you’re initiated in the Cult of Productivity and Self-Promotion, called a Snowflake if you can’t carry your own albatross. Sure, it’s fun when Raphael soft-launches his mistress in La Fornarina by having her point to his name on her arm, or luxuriates in the Blue Steel, just-interrupted vibes of his Bindo Altoviti portrait. Such an air of laissez-faire belies great skill below the surface, but it’s arguably the origin of ‘cool’ – as in stylishly unbothered – itself.

Back when sprezzatura was first in vogue, Castiglione said that the virtue ‘implies a greatness unseen, a potential implicit in its very subtleties and flaws, a strength held in reserve.’ It is the opposite of putting your cards on the table – rather, pretending you don’t have any at all. People of the UK, pack up your camping stools and pay attention to our teenagers. They’re trying to tell us something: stop trying so hard, it’s not like anyone in charge is even breaking a sweat.