Politics of the Female Nude 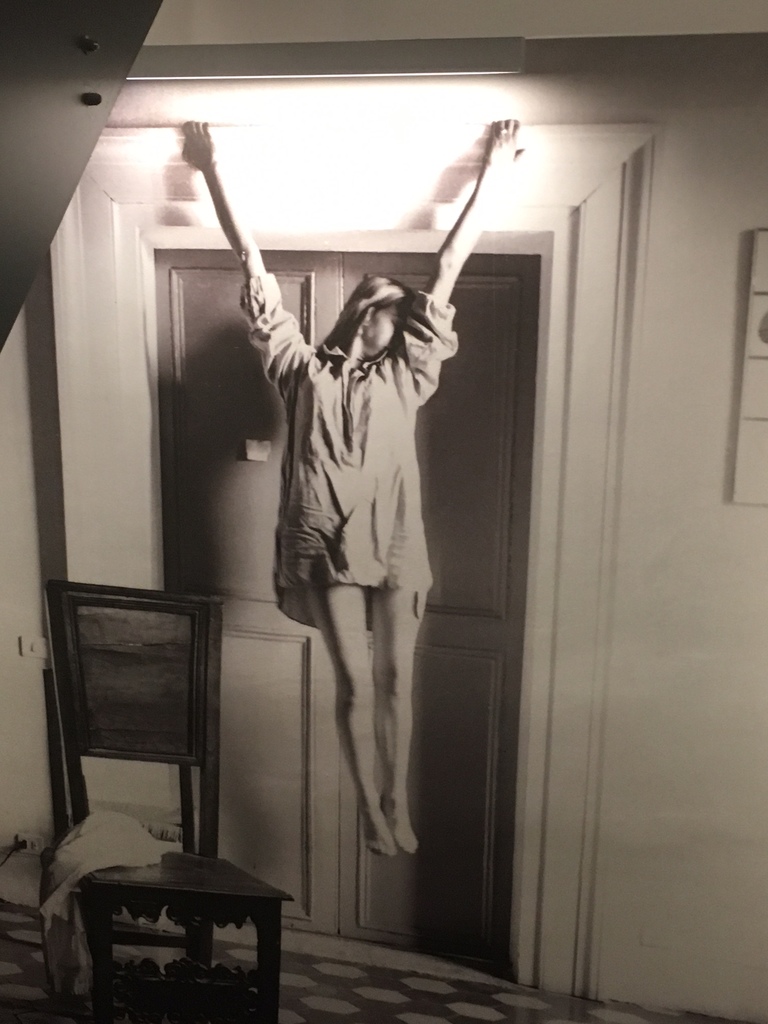 The Feminist Avant-Garde of the 1970s brings together images sprung from a stance the ‘art world’ has a hard time listening to, embodying protest, anger and the personal. We’re not used to being asked to take this kind of thing seriously, but just the strangeness of my experience travelling around a gallery space curated by, hung with images of, and mostly populated by women, convinces me that we should. Even now, it seems that art remains a male preserve.

It’s enough to make me want to throw my laptop out the window and pick up a paintbrush, if only to make a point.

Only 6 out of 32 Turner Prize winners have been female since its inception in 1984. Between 2007 and 2014, the proportion of solo shows given to female artists in UK institutions hovers around 25%. At MoMA in April 2015, only 7% of the works in their permanent display are by women. Here’s a good one – in the year 2000, the Guggenheim in New York had zero solo shows by women. Not one. I’m sure that wasn’t a decision made as part of a woman-hating agenda – I suspect the curators didn’t notice until a journalist compiled some statistics and called them out, but that’s what modern sexism looks like. It’s enough to make me want to throw my laptop out the window and pick up a paintbrush, if only to make a point. And if contemporary statistics look dismal, just imagine what it was like more than 40 years ago. 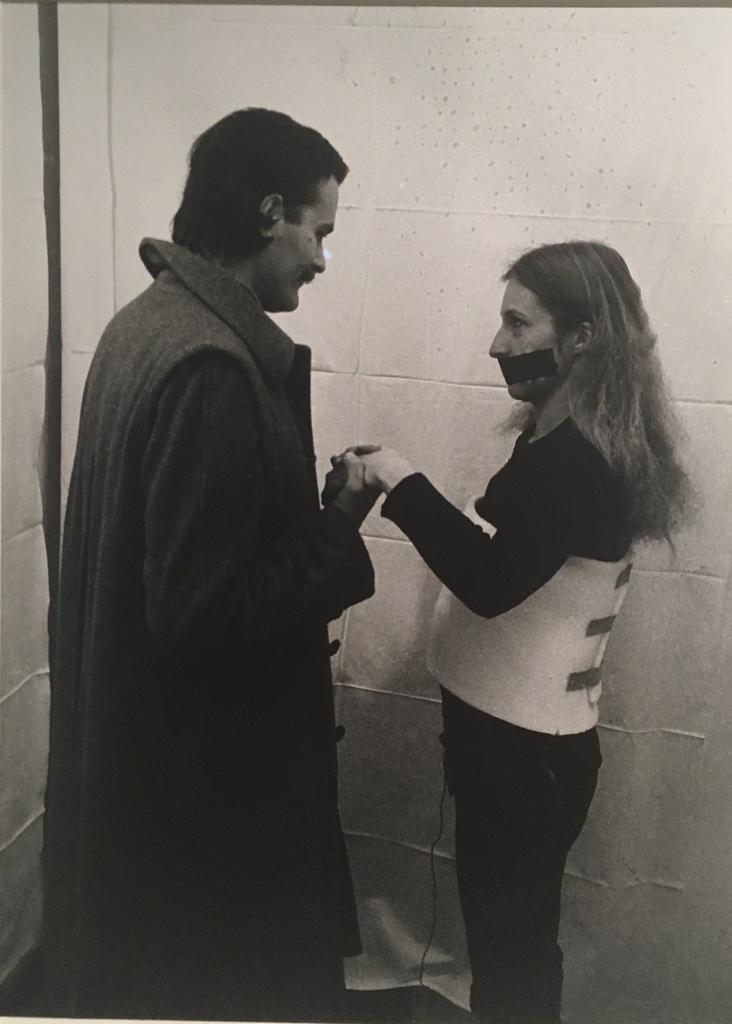 On the one hand, things had never been better for women. The introduction of the contraceptive pill in the 60s sparked a sexual revolution. Roe vs Wade was passed in America in 1973, and women had more control over their bodies than ever before. The Equal Pay act was introduced in 1970 (although it took five years to come into effect) and women had access to spheres of work previously reserved for men. By the 1970s, women were practically equal citizens – under the law, at least. Attitudes were much slower to change, and misogyny was arguably entrenched rather than alleviated by these societal shifts. Men could feel the ground moving beneath them, and started to kick back: victories were followed by defeats. 1976 saw the defunding of all but ‘medically necessary’ abortions in the USA; although women were permitted to take any job, attitudes kept the vast majority of them in the home. Progress was visible, but its benefits were out of reach for most. This is the political climate, then, which birthed the artwork currently on display at the Photographer’s gallery. Women suddenly had a voice, and boy, did they have plenty to shout about. 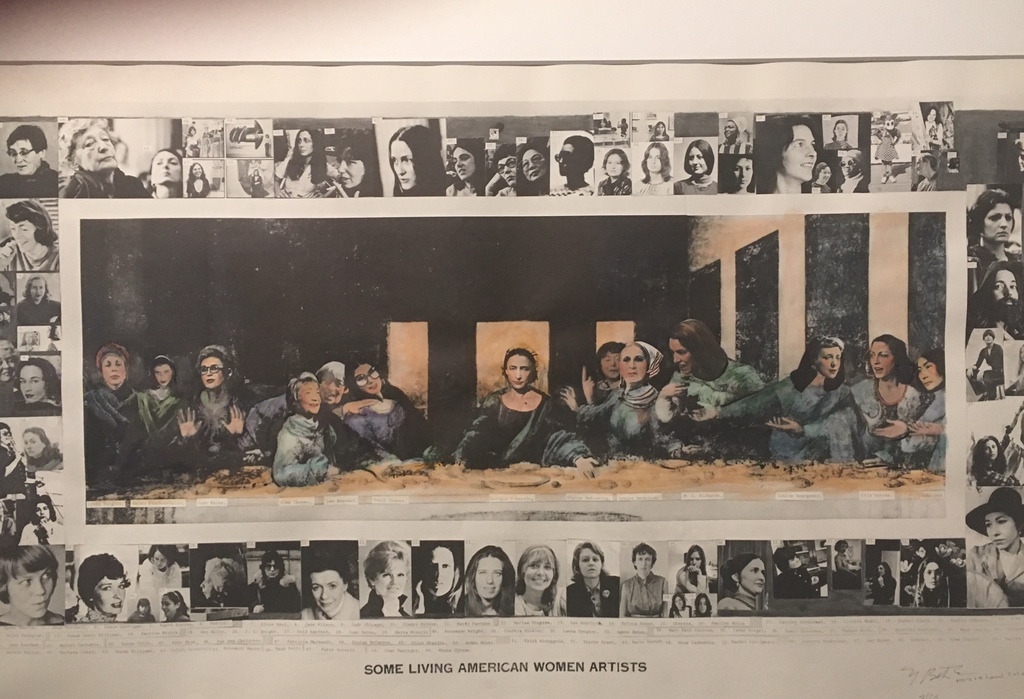 The images in Feminist Avant-Garde of the 1970s anticipate the male gaze and stare it down. Themes range from playful (exasperated) commoditisation of the body to abjection. In ‘Tapp and Touch Cinema’, Valie Export stands on a street corner, inviting male passers-by to insert their hands into a veiled box, reminiscent of a theatre and its curtains, strapped over her naked chest. The price for feeling her breasts is to look her in the eye – something they have little chance of avoiding, although many of them try. ORLAN’s ‘Le Baiser de l’artiste’ [The Kiss of the Artist] both monetises and literalises the transaction that many women are forced to undertake for free: visitors could pay five francs to kiss ORLAN, or to light a candle as one might in a church after saying a prayer for forgiveness (talk about a Madonna Whore complex). Both Export and ORLAN grasp the murky truth of assault and subtle prostitution with which women are so familiar and thrust it into the light of performance, imbue it with all the reverence normally afforded ‘art’, and crucially take control of transactions in which women typically lose so much. 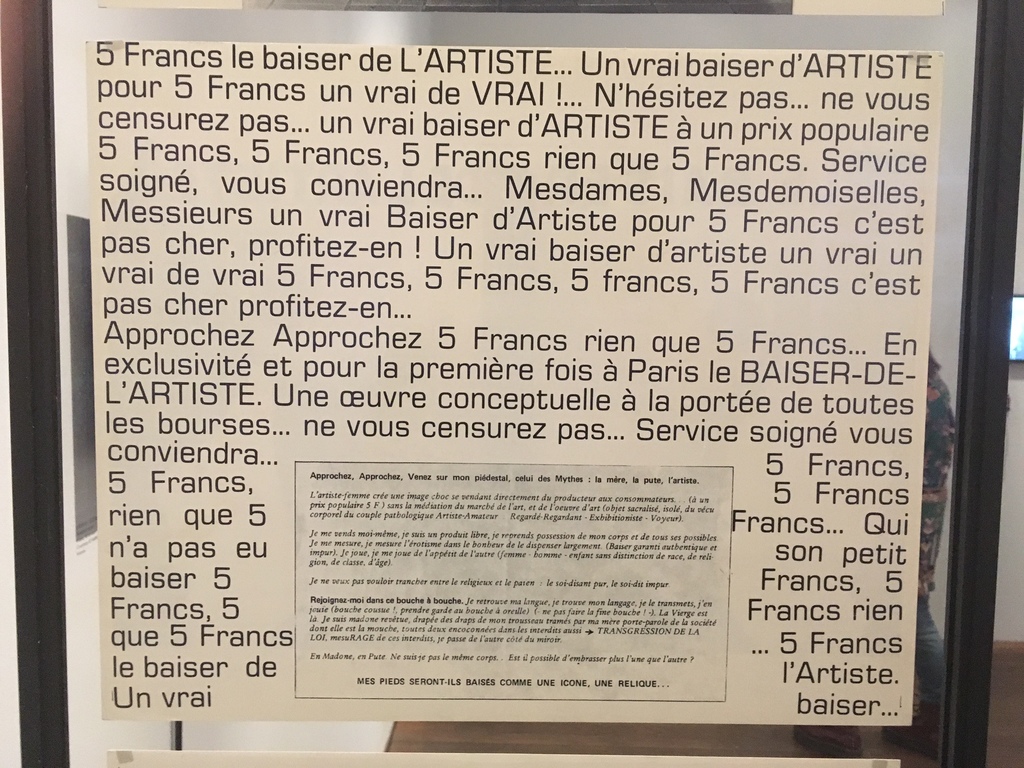 ORLAN, ‘Le Baiser de l’artiste’ [The Kiss of the Artist], 1977. Installation shot at the Photographers' Gallery.

Nudity and nakedness feature again and again. There’s a real sense of the reclamation of a medium which had so long demeaned and sexualised, objectified and anonymised the female. ‘Nakedness reveals itself. Nudity is placed on display’ writes the late John Berger, and the exhibition sees the two ends of this dichotomy wrestling with each other. Berger wrote about the tradition of the European nude, wherein ‘the (artists) and spectator-owners were usually men and the persons treated as objects, usually women’. At the Photographers' Gallery, one half of that equation is reversed. While the subject of most images on display remain female, and plenty of them naked, their artists are women; many are self-portraits. According to Berger, this power structure has so permeated our culture and collective consciousness that it’s become something women do to themselves – ‘they survey, like men, their own femininity,’ becoming both ‘surveyor and surveyed’ as they move through the world. With such a long history of subjugation by and within the image, how is a woman to reconcile her identity with that of artist, not subject? The answer here seems to be: by inhabiting both roles at once.

With such a long history of subjugation by and within the image, how is a woman to reconcile her identity with that of artist, not subject? The answer here seems to be: by inhabiting both roles at once. 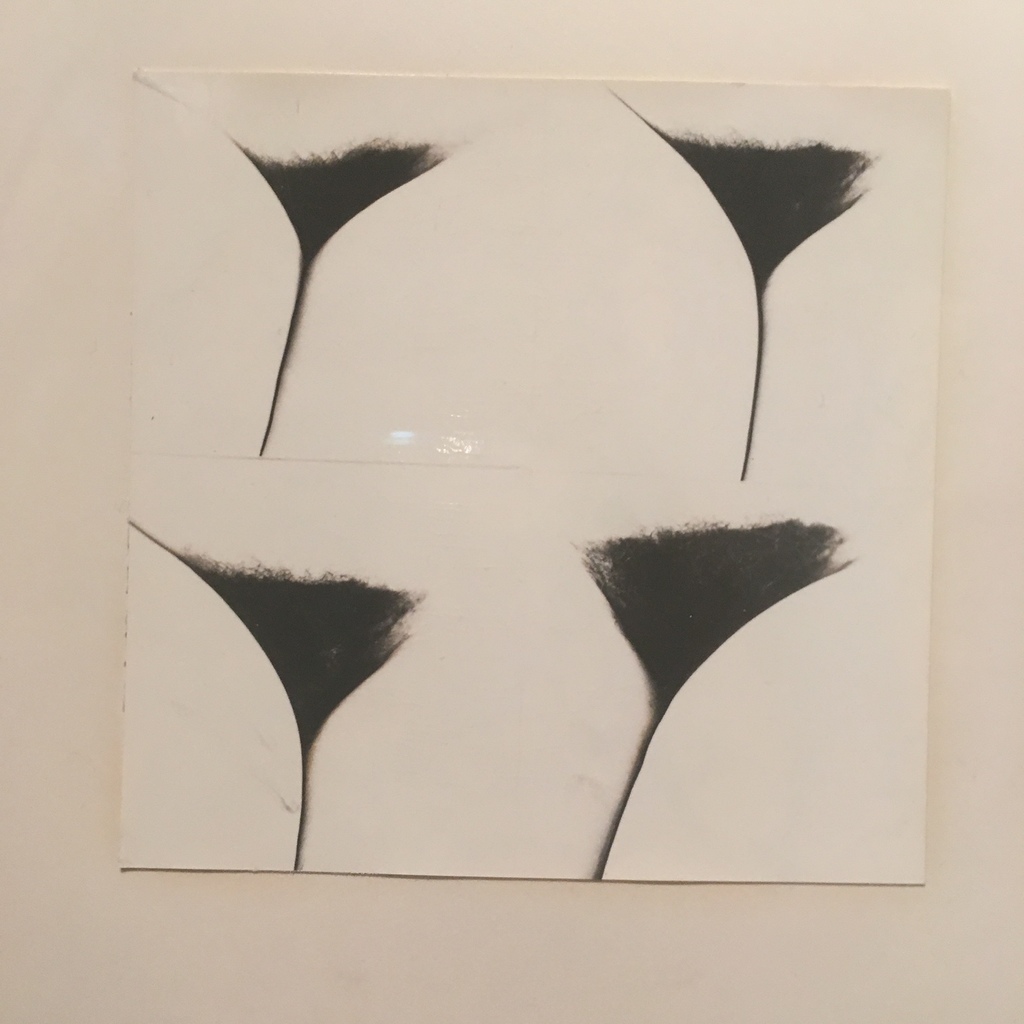 Berger explains that while the vast majority of paintings produced in the tradition of the nude are just that – nudes, in which the woman’s depiction is ‘a sign of her submission to the owner’s feelings or demands’ – a few exceptions do exist, and their diversion from the framework actually removes them from the category. The images which depict women ‘naked’, rather than ‘nude’, are ones made with love, from life and which depict their subject as an individual rather than an ‘abstraction’. Whether the photographers are aping this traditional format – take Lili Dujourie, photographed prone on the floor, all body and no face – or subverting it like Rita Myers, blank and unflinching as she stares into the camera and the eyes of the viewer, these are women who, in their (literal) nudity, are asserting their nakedness. For nakedness, read: subjectivity, agency. 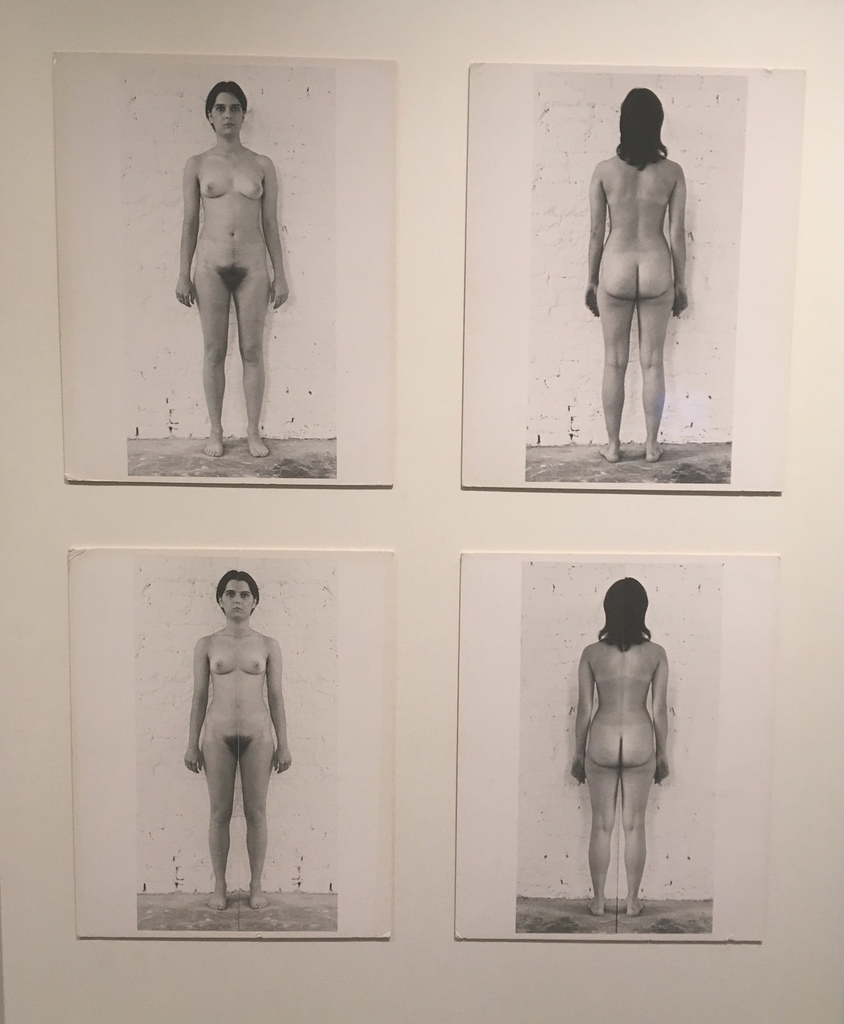 If I were to write about feminist art and not mention vaginas, I’d be missing a trick. They feature prominently, especially towards the end of the exhibition, on the far side of the fourth floor gallery as the rage picks up its pace. Judy Chicago’s ‘Red Flag’ is a close-up shot of a woman’s hand pulling a bloody tampon from between her legs, and it occurs to me that this constitutes the ultimate nakedness, and therefore the antithesis of the nude. If a nude is an image made by and for men, ‘Red Flag’ is the last thing they want to see. It’s the ultimate fuck you to a patriarchy assembled uncomfortable in front of the most female – and least ‘feminine’ – image that Chicago could muster. 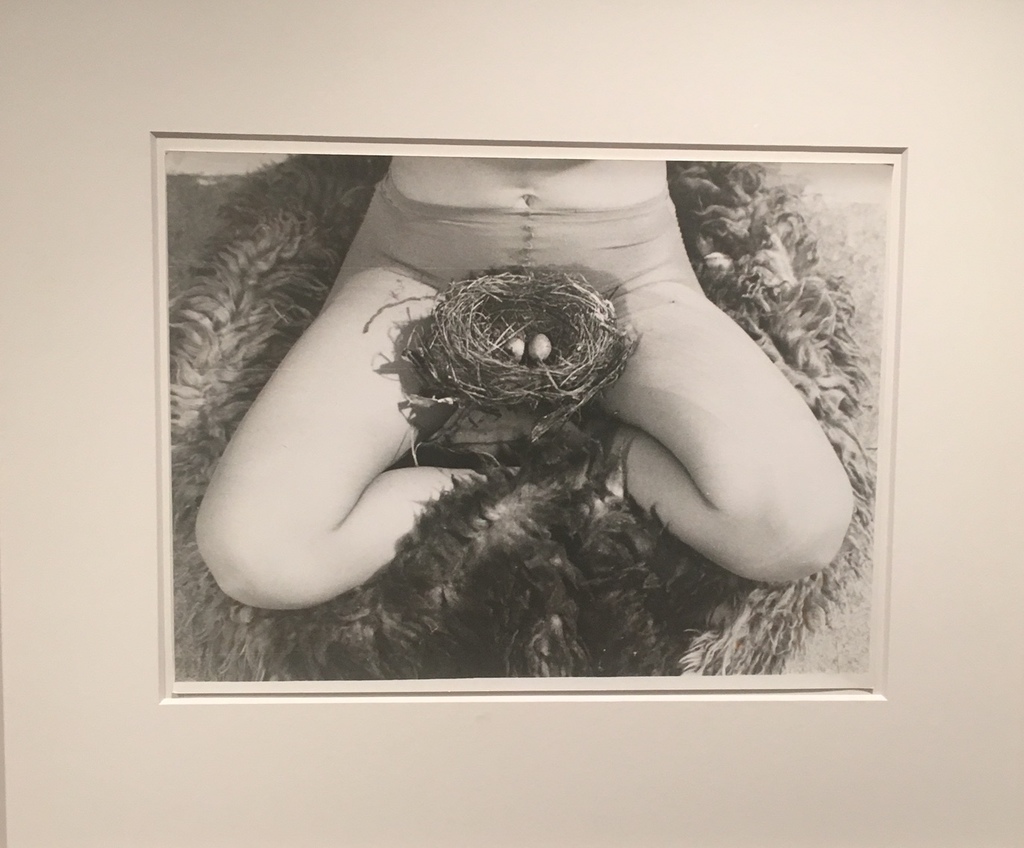 ‘Choose […] an image of a traditional nude. Transform the woman into a man. […] Then notice the violence which that transformation does. Not to the image, but to the assumptions of a likely viewer’. Artists like Eleanor Antin could have lifted their inspiration from these sentences of Berger’s, or vice versa – quite possible, in fact, considering that her ‘Portrait of the King’ and his ‘Ways of Seeing’ were released in the same year. Antin, though, has turned his proposal on its head by photographing herself as the archetypal patriarch. Noble, paternal and powerful, (s)he looks out of the frame, fist on breast. It’s a very familiar tableau, and it takes a few seconds to ‘get the joke’, as it were. The secondary conceit, of course, is that a woman dressed as a man will never be as ‘funny’ or ‘disturbing’ as a man dressed as a woman. Antin is inhabiting a persona we all know and respect. Berger’s imaginary male nude posing like a woman does enact a violence to the viewer – at least, in its puncturing of a hegemony so insidious that we can’t see it until something ripples the surface. Antin manages to make this clear, as well as articulating various counter arguments and their resolutions, in one photograph. Masculinity is something to aspire to; femininity, something to fear. Plus ça change. 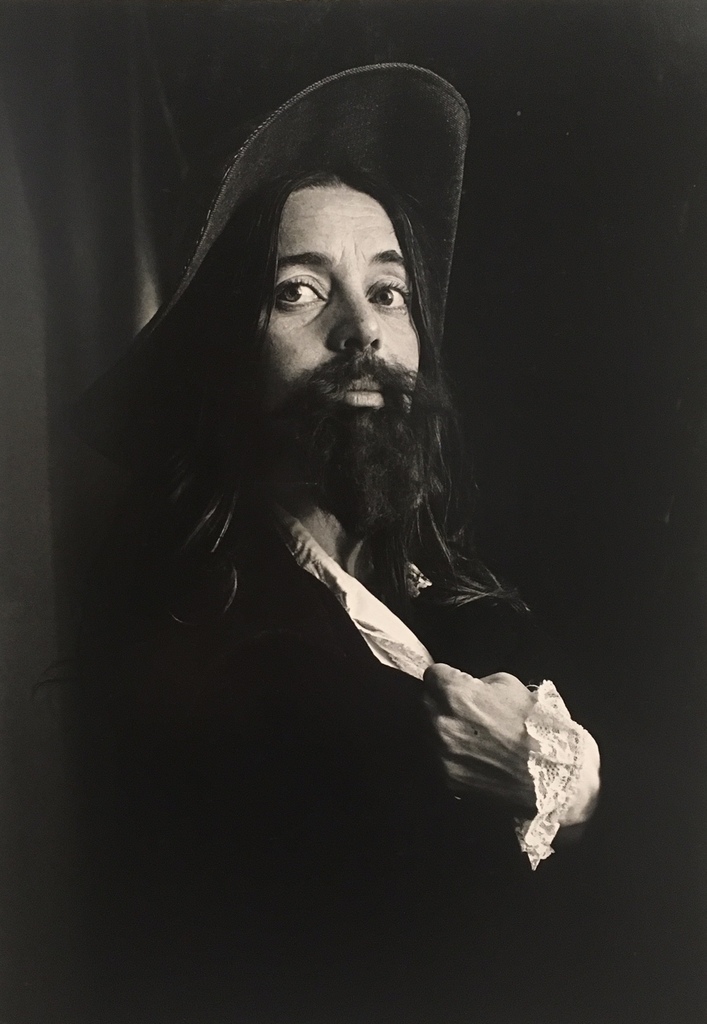 Eleanor Antin, 'Portrait of the King', 1972. Installation shot at the Photographers' Gallery.

Each artist featured in Feminist Avant-Garde is navigating a specific interstice of issues. On the one hand, grouping their work together rather than devoting a gallery to a solo show flattens these individual stances and bodies into one caricature. On the other, the multitude of voices comes to form a cacophony, each lending a tributary to a river growing in size and strength. Through the noise, one call rings out again and again: ‘my body, my body, my body!’, and there is no issue more politically charged, at least in its longevity and geographical scope. The female body is endlessly debated, legislated, desired and censored across the globe, and to show one’s own is an uncomfortable reminder that there exists a human being within each. Therein lies the power of female nakedness – it makes us think of nudes. To see a pair of breasts, un-hoiked-up with wire or silicone, puts us in mind of the pneumatic pairs we see every day advertising everything from car tyres to gym memberships. The perennial appropriation of the female image pulls off an incredible trick in making the natural seem abnormal, and ‘perfection’ the standard. As our world becomes more and more saturated with these standardised representations, the imperative for a counter-argument grows. 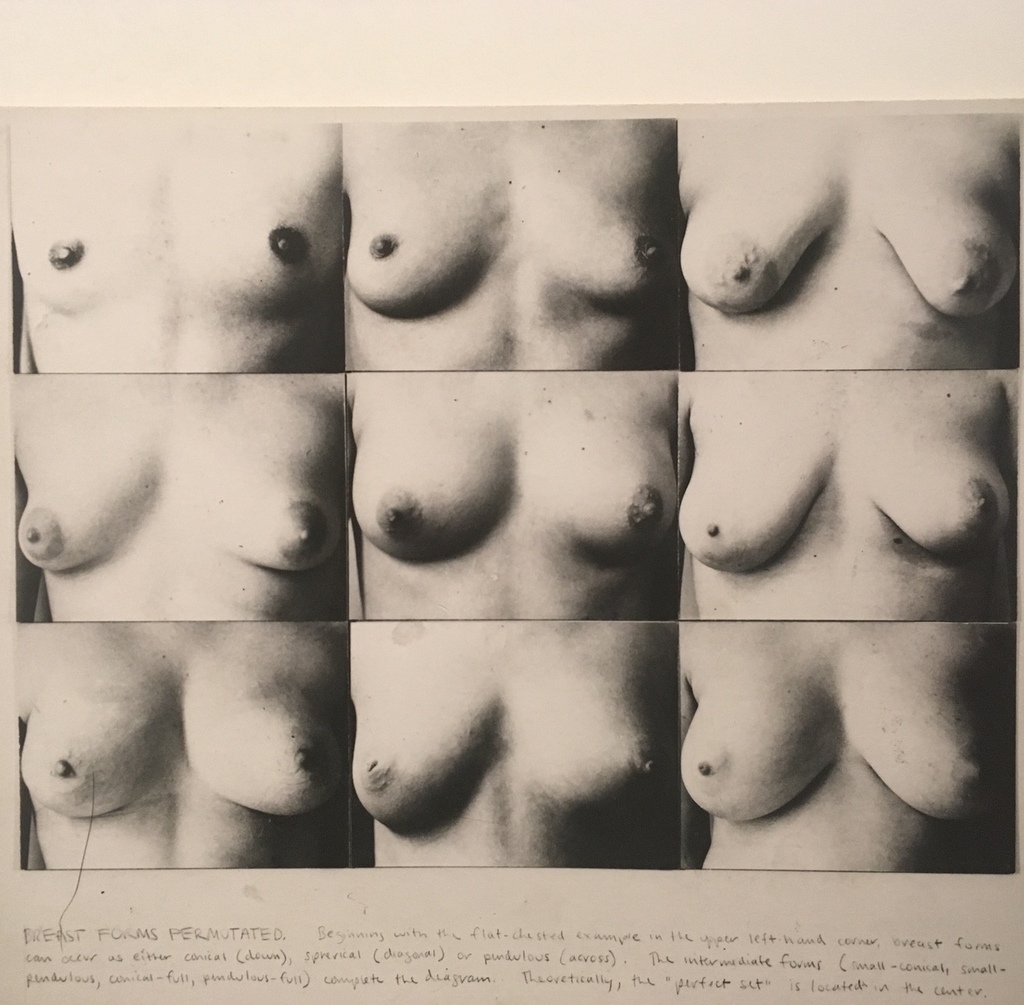 To see a pair of breasts, un-hoiked-up with wire or silicone, puts us in mind of the pneumatic pairs we see every day advertising everything from car tyres to gym memberships.

Hardly any of the issues the artists are exploring felt unfamiliar to me, although I’m living more than a generation after the work was made. Plenty has shifted within government policies, but the way we think of women has barely moved a jot. Specific taboos might change, but their roots remain the same. Now, a man can lose his job for tapping an assistant on the bottom; still, a woman can be questioned about her sexual history in court as she presses charges against her rapist, of whom only 7.5% are convicted in the UK.  Donald Trump can be elected to the highest office in one of the most powerful countries in the world after footage of him describing sexual assault surfaces, but a woman can be fired for using the word ‘vagina’ in an art history lecture. Feminist Avant-Garde of the 1970s reminds us that where we were doesn’t look much different to where we are. More than that, it underlines the imperative to keep fighting, even when we might want to curl up and hide. 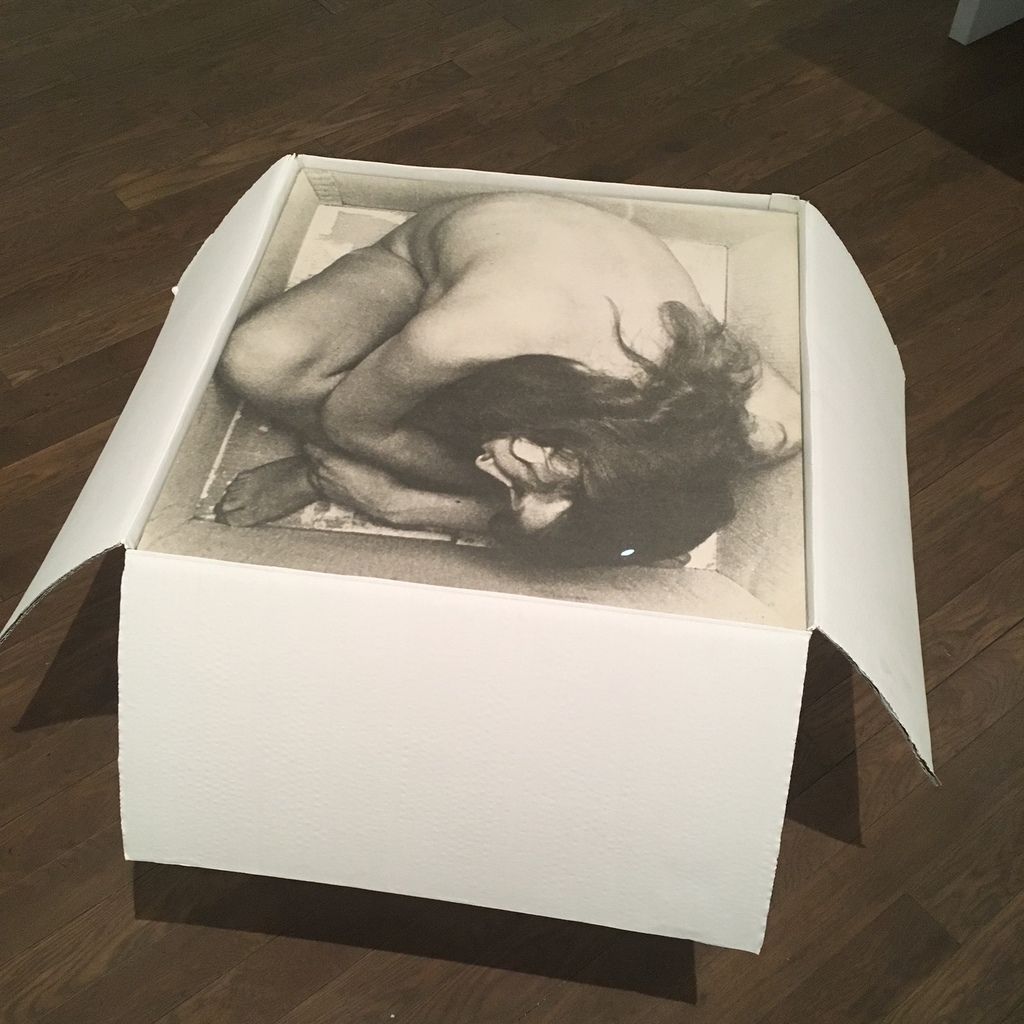