On Monuments and 'Mindful Vandalism'

Steve McQueen’s ‘Static’ (2009) is currently screening floor to ceiling at the Tate Modern until 6 September 2020, and it reads as an allegory for our time. In this seven-minute loop, shot from a helicopter, the camera swirls ceaselessly around the Statue of Liberty. The colossal monument is viewed from a constantly shifting series of perspectives. McQueen’s unrelenting gaze seems to undermine the values that Lady Liberty reportedly stands for: after all, she was erected for the Union’s cause in the Civil War and the abolition of slavery, and yet she stands in an America where slavery’s legacy is far from excised. 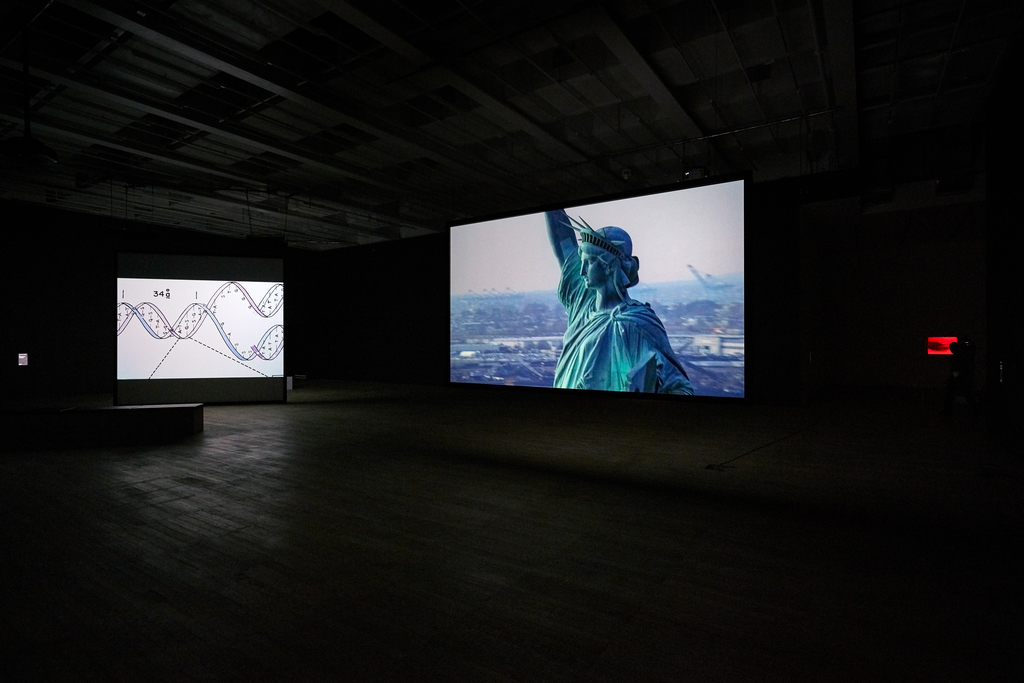 We live in a time when we are scrutinising public monuments more than ever before; debate swirls, like McQueen’s camera. What can we do with monuments to avoid remaining ‘Static’, how should we proceed in the name of progress?

"We live in a time when we are scrutinising public monuments more than ever before; debate swirls, like McQueen’s camera" 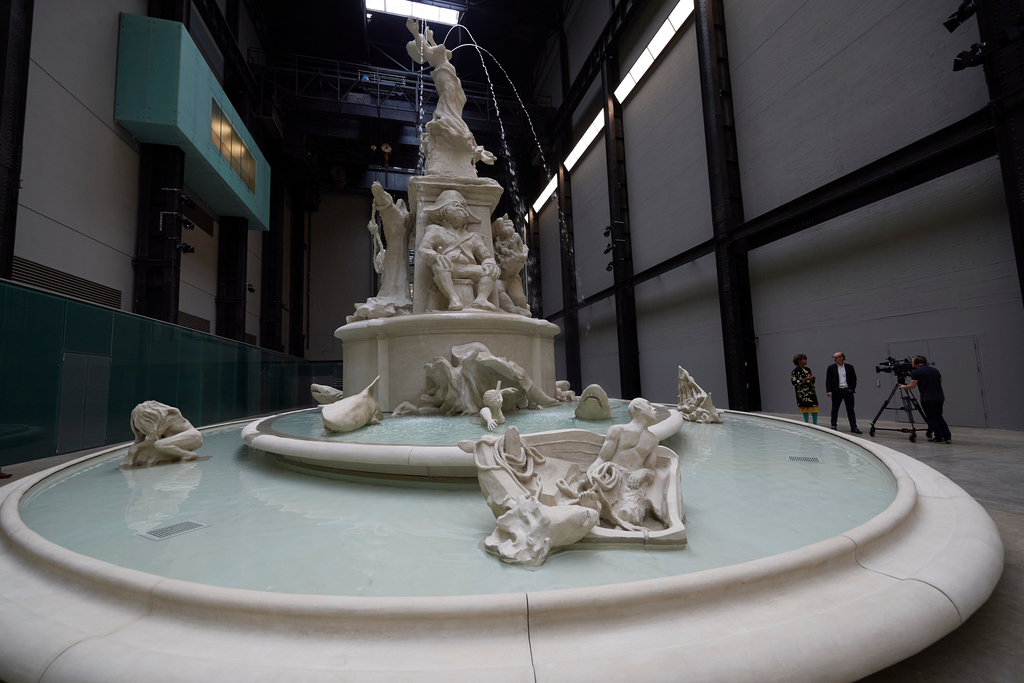 Showing simultaneously alongside the Steve McQueen exhibition in the Turbine Hall is Kara Walker’s ‘Fons Americanus’ (2019), a 13-metre tall, four-tiered fountain (it has since been extended until 8 November 2020). Walker’s monument sits in conversation with the Victoria Memorial in front of Buckingham Palace; but rather than celebrate the British Empire, it stands as a fierce rebuke, asks uncomfortable questions about Britain’s colonial past, and exposes the elaborate symbolism of public monuments: the stories they purport to tell, and the stories that they paper over and repress. 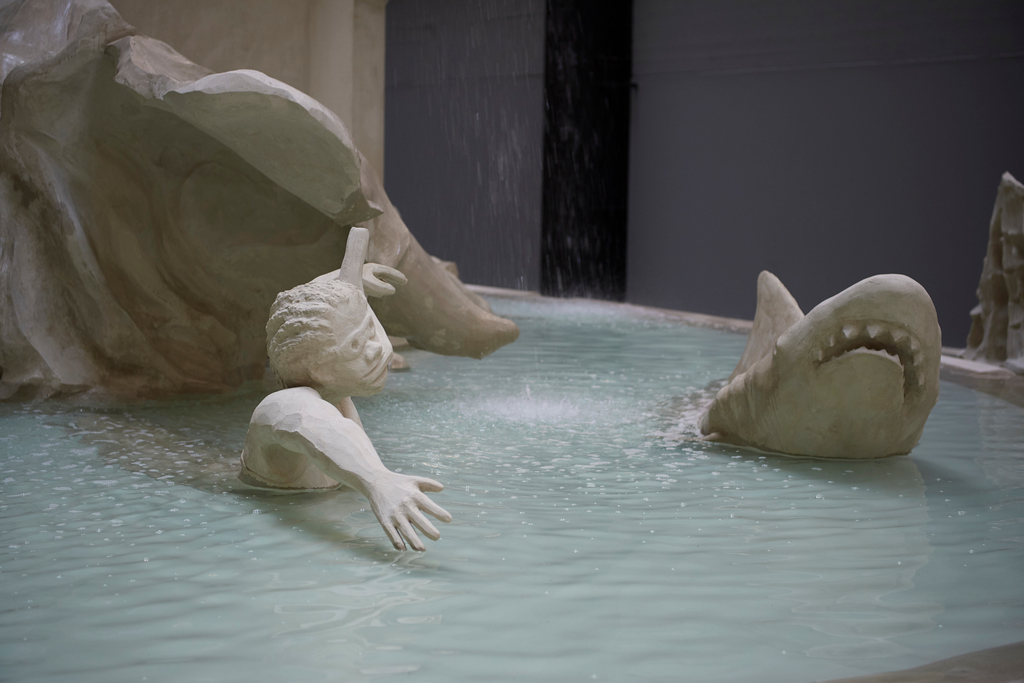 Like McQueen’s ‘Static’, Kara Walker’s monument seems to be constantly in motion, and in a way that suggests threat or imminent danger. A fishing boat has sprung a leak and risks sinking. Sharks circle the boat. Three jets of water shoot from Venus, the fountain’s centrepiece, two from her breasts, one from a slit in her neck.

"Rather than celebrate the British Empire, it stands as a fierce rebuke, asks uncomfortable questions about Britain’s colonial past" 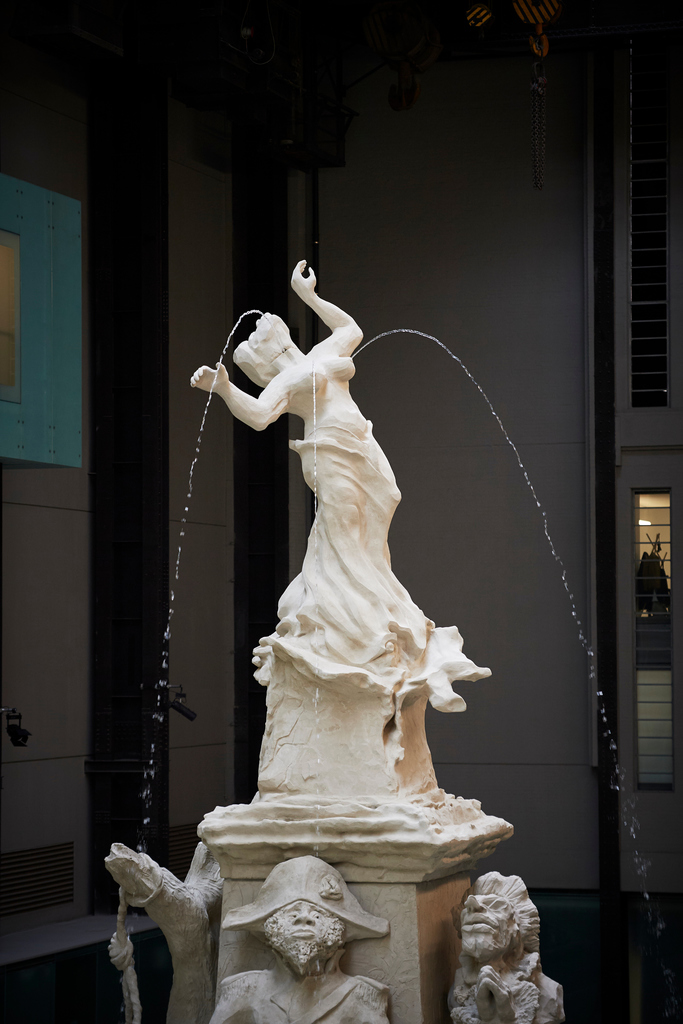 This Venus is a reference to The Voyage of the Sable Venus from Angola to the West Indies by Thomas Stothard: an appalling piece of propaganda from 1801, the engraving shows an African woman standing on a half-opened shell, surrounded by white cherubs. The image was used to promote the transatlantic slave trade.

Besides the appropriated Sable Venus, all of Walker’s figures here, if not direct allusions to older stories, have a fictional texture. Monuments, Walker seems to be saying, are always works of fiction; they contain stories about those who erected them and the narratives that they might have wanted to silence. So, while we remember the Black Atlantic, Walker also invites us to remember our wilful misremembering. 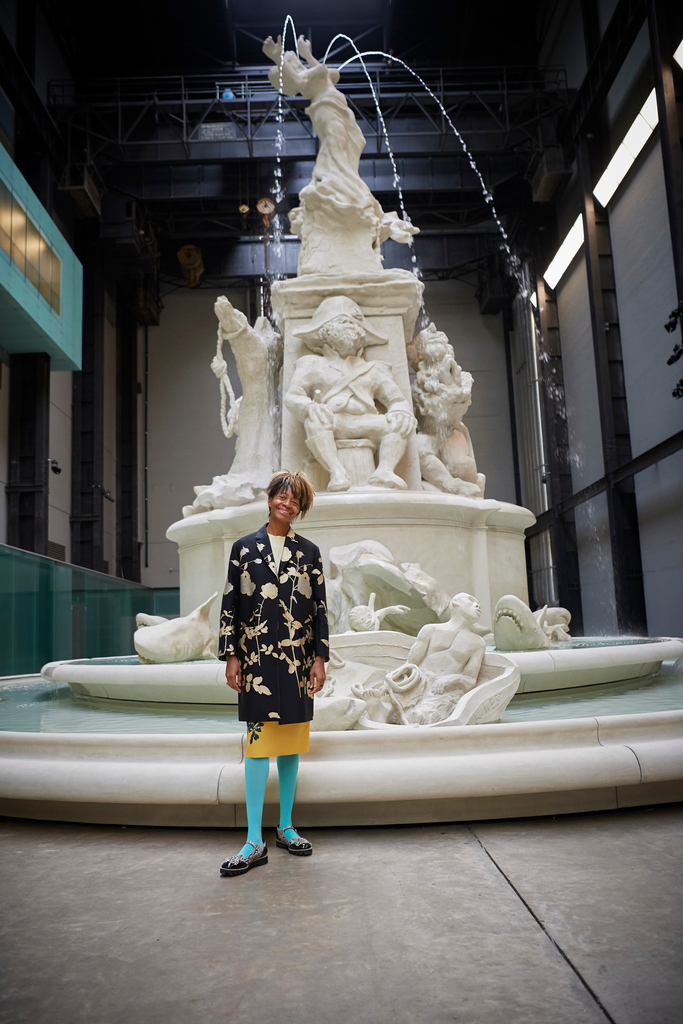 "While we remember the Black Atlantic, Walker also invites us to remember our wilful misremembering"

Besides the rainbows in windows, the distanced queues outside Tesco, and doorstep clapping, I suspect one of the images that the UK will remember from its lockdown is that of protestors in Bristol on 7 June toppling a statue of Edward Colston, an event that threw debate surrounding public monuments into stark relief. While the water in Kara Walker’s ‘Fons Americanus’ stands for the oceans that slaves were forcibly transported across (as well as, perhaps, shared histories and connection) the historian David Olusoga recently pointed out the ‘poetic’ role of water in the case of the Colston statue, which was thrown into a harbour. A ‘prolific slave trader dragged through the streets of a city built on the wealth of that trade,’ Olusoga wrote, ‘and then dumped, like the victims of the Middle Passage, into the water.’ Indeed, these events do have a certain rhyme to them. 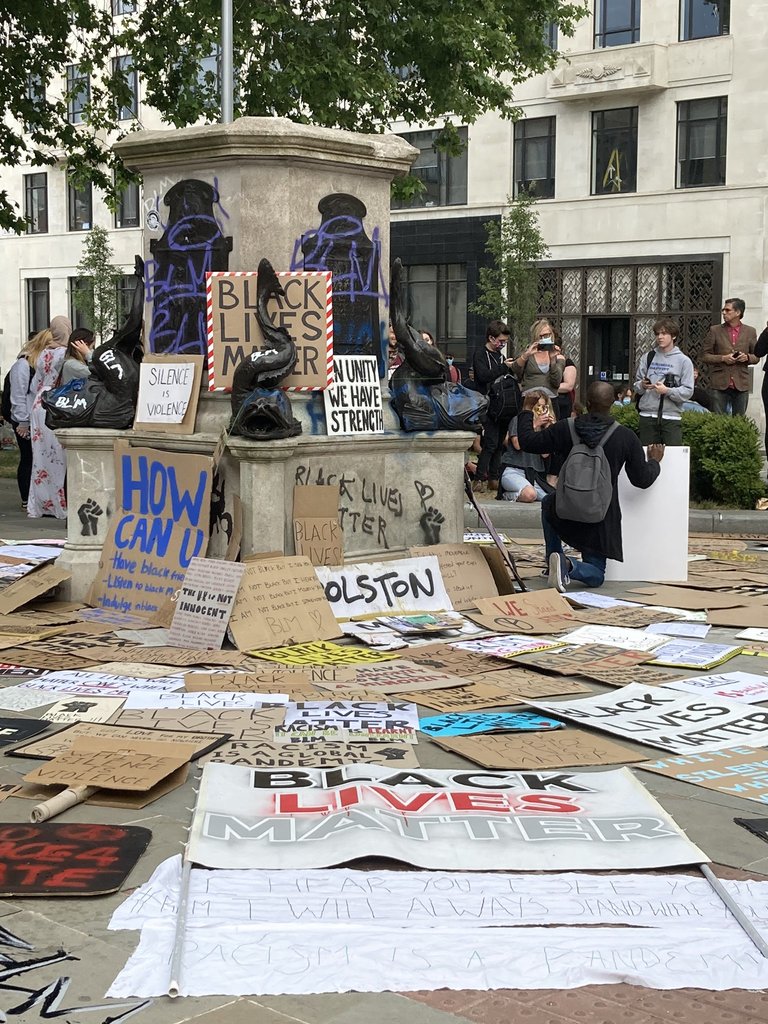 While some called for the statue to remain in the harbour, others shared their own ideas. The Bristolian street artist and political activist Banksy took to Instagram, posting his suggestion for what to do with the empty plinth. Banksy’s sketch shows an exhumed Colston statue with rope around its neck and life-sized bronze statues of protestors in the act of pulling it down. ‘Everyone happy. A famous day commemorated’, read the end of his caption.

What Banksy couldn’t have foreseen was the artist Mark Quinn’s intervention. On 15 June, Quinn unveiled ‘A Surge of Power (Jen Reid)’ (2020), a sculpture of the eponymous Reid, who was photographed standing on the plinth with her fist raised during the Black Lives Matter protests on the day Colston was toppled. While some commentators were overjoyed at Quinn’s guerilla initiative and pleased to see a black woman in the slave trader’s place, others were more skeptical, arguing that Quinn used his privileged position to capitalise on black pain and that real allyship might have looked more like assisting a black artist to fill the space instead. 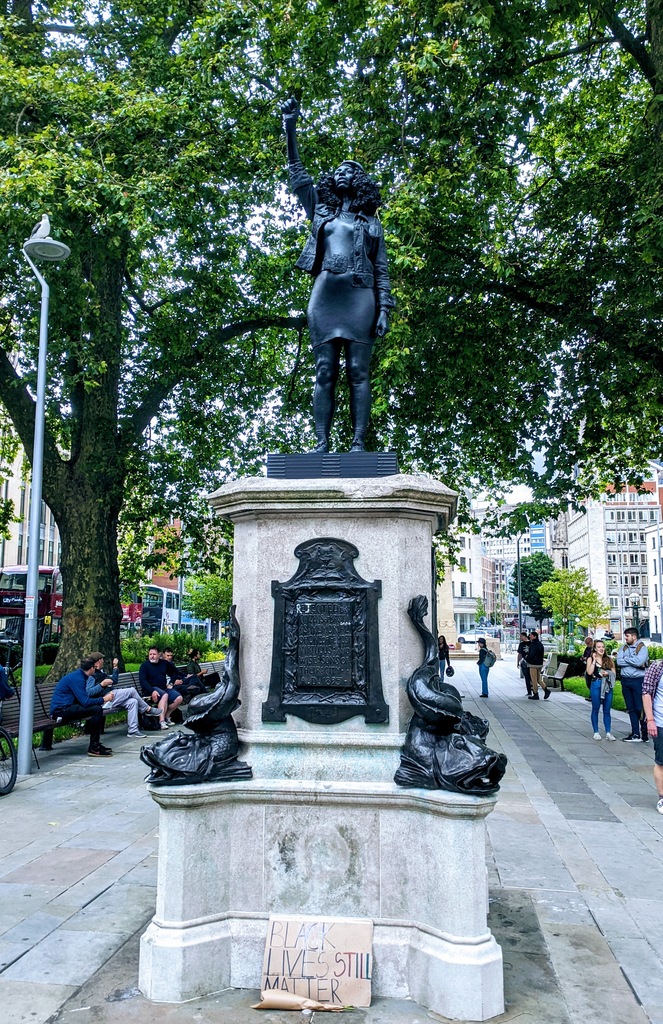 Banksy and Quinn aren’t the first artists to have had designs for the Colston plinth. In 2006, Hew Locke, a London-based sculptor who lived in Bristol in the 1980s, bedecked Colston in the trappings of his wealth: in the resulting photograph, the statue is dripping in golden cowrie shells and other trade beads. Framed by the portentous capillaries of tree branches set against a hoary Bristol sky, Locke’s Colston appears as grotesque, undignified and attractive as a Christmas tree. This work is from ‘Restoration’, yet elsewhere Locke refers to the series as ‘mindful vandalism’. Restoration and vandalism might seem at odds, but the end-result is the same: draped in a coat of shimmering gold bile, Locke restores to the surface an ugly material reality already congealed in the underlying bronze and picks up a story long since hidden in the depths of our collective imagination. 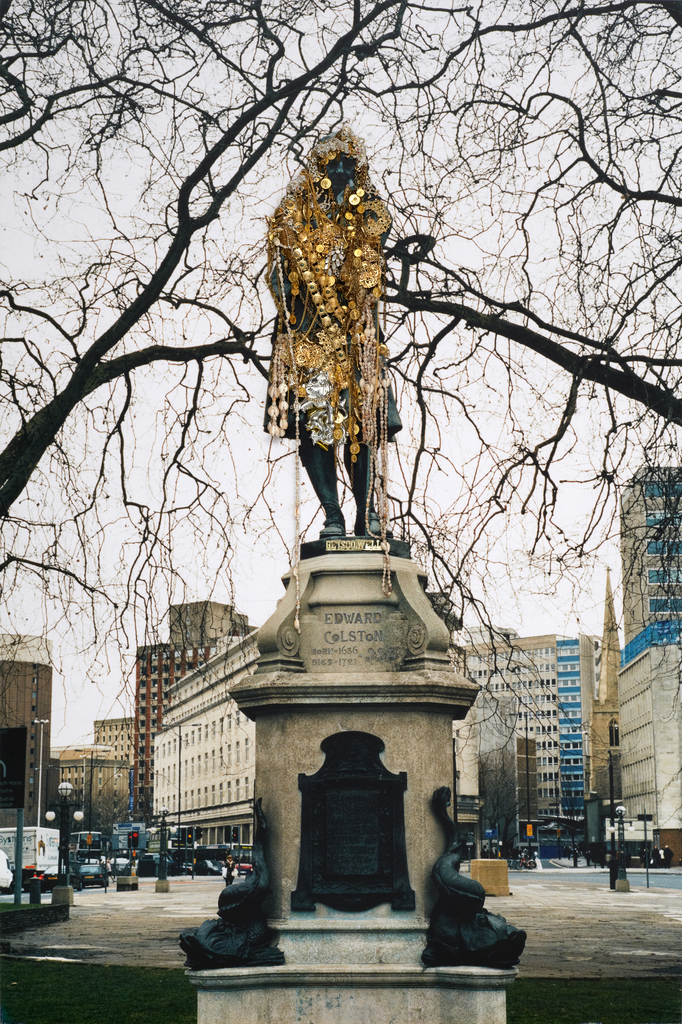 I love that phrase — mindful vandalism. It seems like one that could only belong to the 21st century. ‘Vandalism’ is of course a much older word, coined in 1794 by Henri Grégoire to describe the destruction of artwork after the French Revolution (alluding to the East Germanic tribe of Vandals who ransacked Rome in 455.) In its historical context, we can see how vandalism has long been associated with restoration, for it was during the French Revolution that the Louvre was transformed into a public museum, the revolutionaries taking the best old-master paintings and monuments to put on display. Acts of vandalism simultaneously gave rise to ideas of patrimony and national heritage. 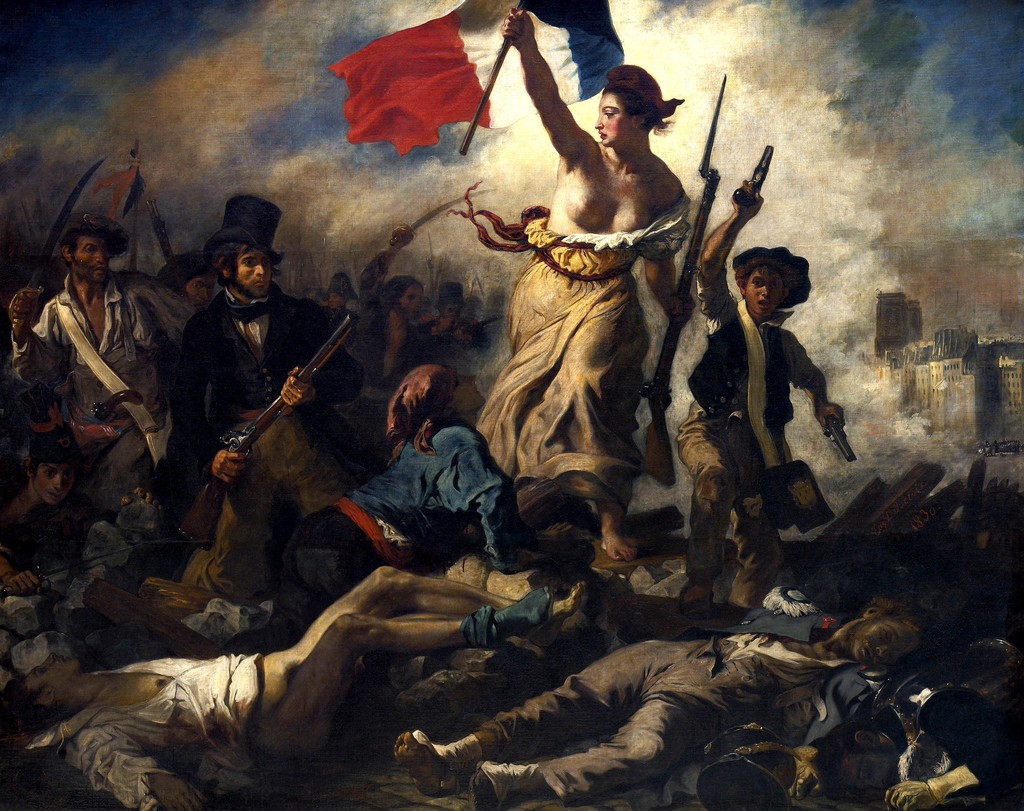 Sometimes, it’s not as grand as all that. Next to Exeter College, Exeter, there is a statue of Redvers Buller astride a horse, which I passed every day for two years as teenager. More days than not, over his pompous, feathered forage cap, the general wore a traffic cone, put there presumably by drunken students from the nearby university, incorrigibly replacing the cone each time it got taken down. This game of cat-and-mouse between pranksters and the city council always amused me; but amusement turned to horror when I learned that Buller had a hand in setting up concentration camps during the Boer War. Why was this man being venerated? I couldn’t understand it. Following the forced removal of Edward Colston, there have been calls in Exeter to have the statue taken down and put in a museum. 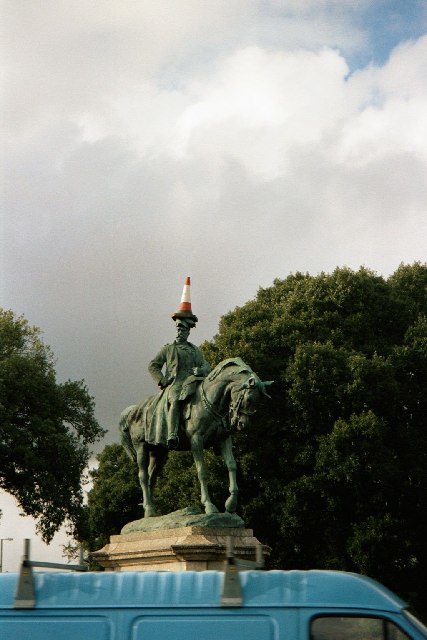 I’m not sure what the answer is regarding our reimagining of public memorials. But between unrelenting scrutiny, remembering misremembering, erecting a memorial to its taking down, acts of restoration and mindful vandalism, one thing is for sure: we can do better than an occasional traffic cone. Time to review the Ancien Règime.