Not just space shifters but time travel, as this celebration of half a century of bold minimalism and brutalist architecture opens its doors at the Hayward Gallery. Itching with excitement to see the new installation of Richard Wilson’s 20:50, I rushed through swathes of chain link curtains and past endlessly reflecting mirrors to join the queue… Walking along the metal gangway into the space, I’m surrounded by a mirrored pool, reflecting the beautifully restored gallery spaces: doors, windows and even the newly revealed prisms of the skylight, slicing through the pool with elegant blue triangles. 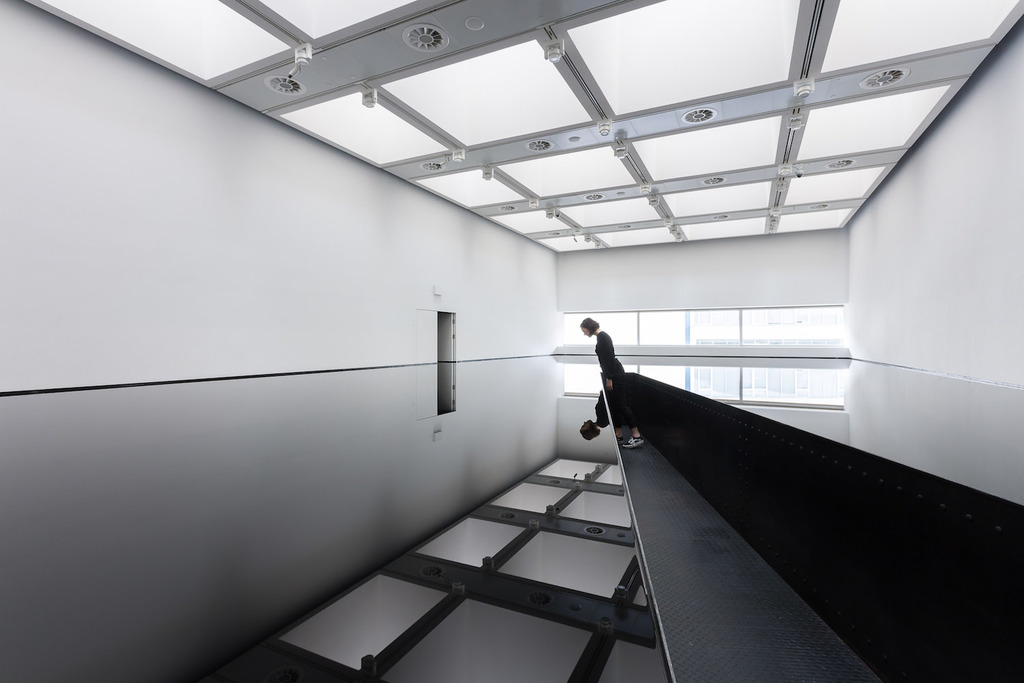 The curator Cliff Lauson could not be more astute when he said that the building is another voice – he called it the silent curator. That’s the one point I would disagree with him on, as it’s a loud voice!

“The building really has a life of its own,” explains assistant curator Tarini Malik, “the curator Cliff Lauson could not be more astute when he said that the building is another voice – he called it the silent curator. That’s the one point I would disagree with him on, as it’s a loud voice!” The building does indeed creep into almost all of the works, its triangular rooflights edging into the curves of Anish Kapoor’s “Sky Mirror, Blue” and even inspiring a new work by Portuguese artist Leonor Antunes, made from hundreds of interlocking brass triangles suspended from the ceiling, referencing the rooftop skyline.

Wilson’s fascination with buildings and architecture began with Matt’s gallery during the 1980s, when he told us that he would go in “to unbolt the building and move it around, to play with the space.” This birthed the first iteration of 20:50, which moved to the vast industrial space of Saatchi Gallery in Boundary Road before finding a permanent home at MONA in Tasmania (I’d like to think it’s on a tourist visa at the Hayward Gallery.) One of my Saturday jobs as a teenager was at Saatchi, and I still remember holding the flat of my palm just millimeters above the surface of 20:50; at the preview on Tuesday morning, standing next to Hayward’s director Ralph Rugoff and gazing at 20:50, he told me that, “the work was designed to be irresistible.” He might be right – here I am, after all, 20 years later and still entranced. 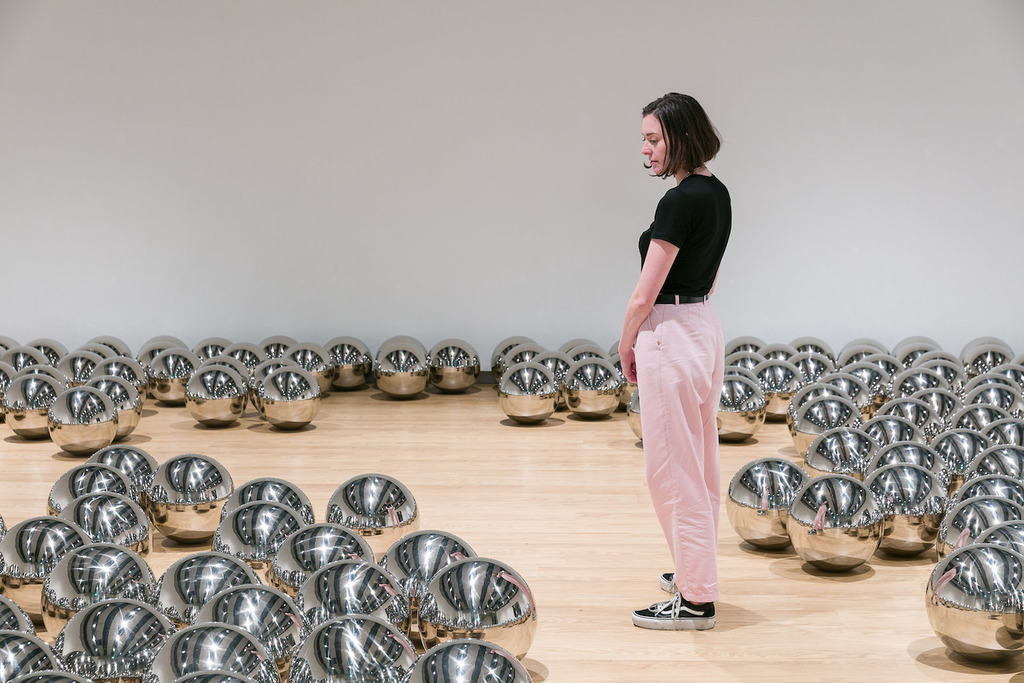 “It arrived on an incredible contraption, which was a cross between a sling and a gantry”, so heavy and highly polished that it can’t be touched.

Yayoi Kusama’s stainless steel globes (Narcissus Garden, 1966-2018) have been on a similarly adventurous round-the-world tour – beginning at the Venice Biennale in 1966, where there were 1300 in total. From Venice they arrived in the canal at London’s Victoria Miro gallery, floating in the wharf beneath a weeping willow before finally emerging scattered across the floor of the Hayward Gallery. Their install here has been overseen by the gallery curators and Kusama’s studio, who flew in from Tokyo earlier this week to place the spheres – hollow, and incredibly light.
Playing with these ideas of weightlessness and reflection is a polished plank leant casually against the wall: John McCracken’s Flash, 2010. It reminds me of scaffolding – a reference to the past two years of painstaking renovation work on the gallery, perhaps? Malik explains that this work is actually a slab of solid bronze. “It arrived on an incredible contraption, which was a cross between a sling and a gantry”, so heavy and highly polished that it can’t be touched. Once the work was in place, it took many days of work to achieve its perfectly mirrored surface. As Malik told me, “it seems so pristine and so simple, but this sense of minimalism actually has so much weight and energy.” 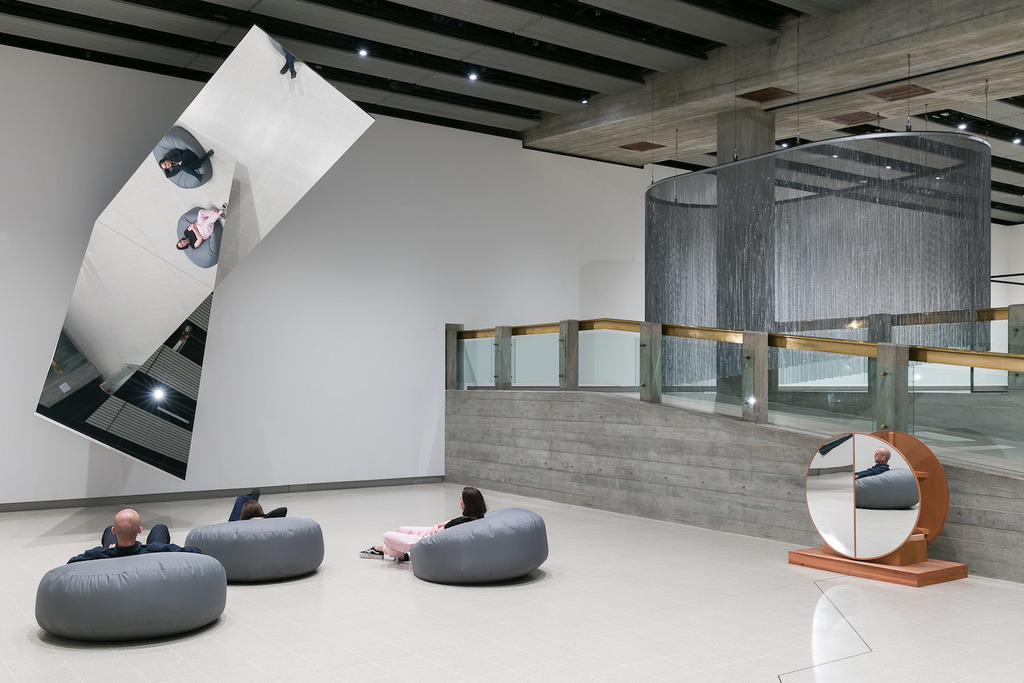 Next up is Jeppe Hein, an artist whose work I spent the summer leaping in and out of (his ‘Appearing Room Fountains’ on the Southbank are beloved of my small daughter). The Hayward has installed a somewhat more meditative piece of his, wherein the only interaction required from its viewer is to lie back and look. A new commission for the gallery, ‘360 Illusion V’ is a rotating artwork consisting of two huge mirrored panels which reflect each other and the viewer. As Hein encourages us to ask, ‘are you outside or inside the work? You don’t really know.’

From the huge to the small, and rather than occupying simply one gallery space, Josiah McElheny’s mobile mirrored sculptures have escaped to colonise each of the eight gallery spaces throughout the Hayward. Designed to be moved around the space in a slow choreographed dance, each of the shapes (worn by a dancer) reacts to the others as they move at right-angles. Instead of the dancers answering each other with their movements, Space Shifters sees the works react to the building. Malik explains the process of the curators working with choreographer Susan Sentler and a team of eighteen dancers: “We really thought about the route that the dancers would take echoing the architecture of the space. So you have really strong diagonals, which are prevalent all through the building, such as the ramps and the pyramids.” 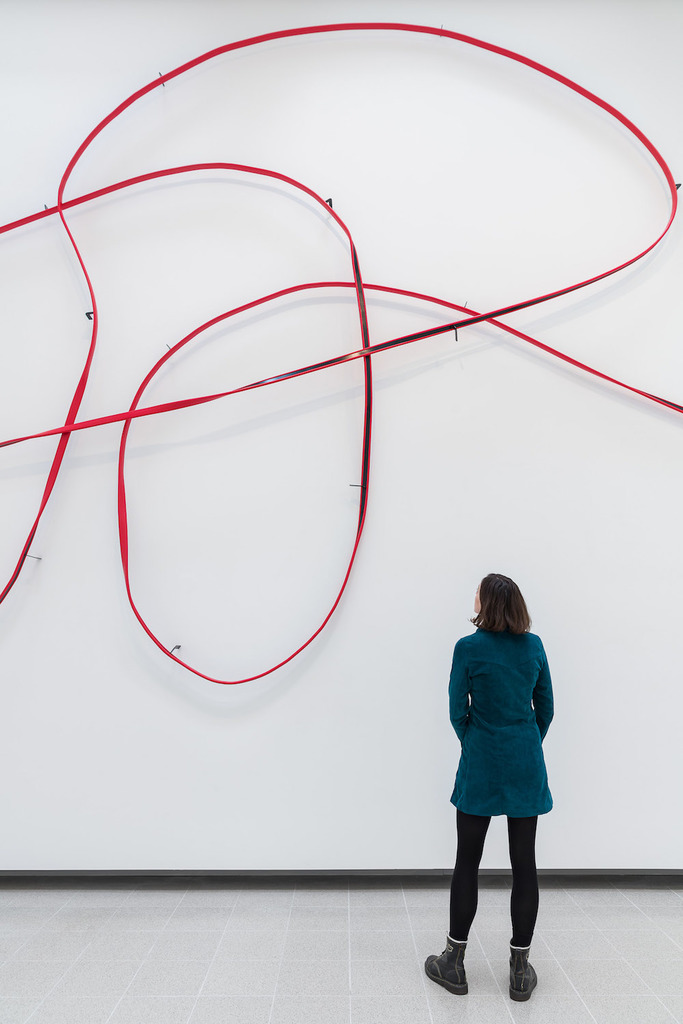 Hauling yourself up to the top floor and grasping the handrail, you’ll see it suddenly abandon the stairwell to spiral off into the gallery and up along the walls in Monika Sosnowka’s new work.

Not only choreographers but structural engineers, too, were called in to consult on this exhibition; despite their apparent fragility, many of these minimalist works are incredibly heavy. Arup combed through the original archival blueprints from the 1960s to follow up on structural load assessments. “The mind boggled with the level of calculation we had to go into – at one point we thought, are we structural engineers or creatives?” asked Malik. “It has probably been the most challenging show that I have ever worked on.”

Architectural interventions range from the playful to the whimsical. Hauling yourself up to the top floor and grasping the handrail, you’ll see it suddenly abandon the stairwell to spiral off into the gallery and up along the walls in Monika Sosnowka’s new work (pragmatically named Handrail). Each visitor to the space has to pass through Felix Gonzales-Torres’ shimmering gold curtain, too, which frames the gallery spaces on the third floor and affords glimpses of the pyramid skylights. 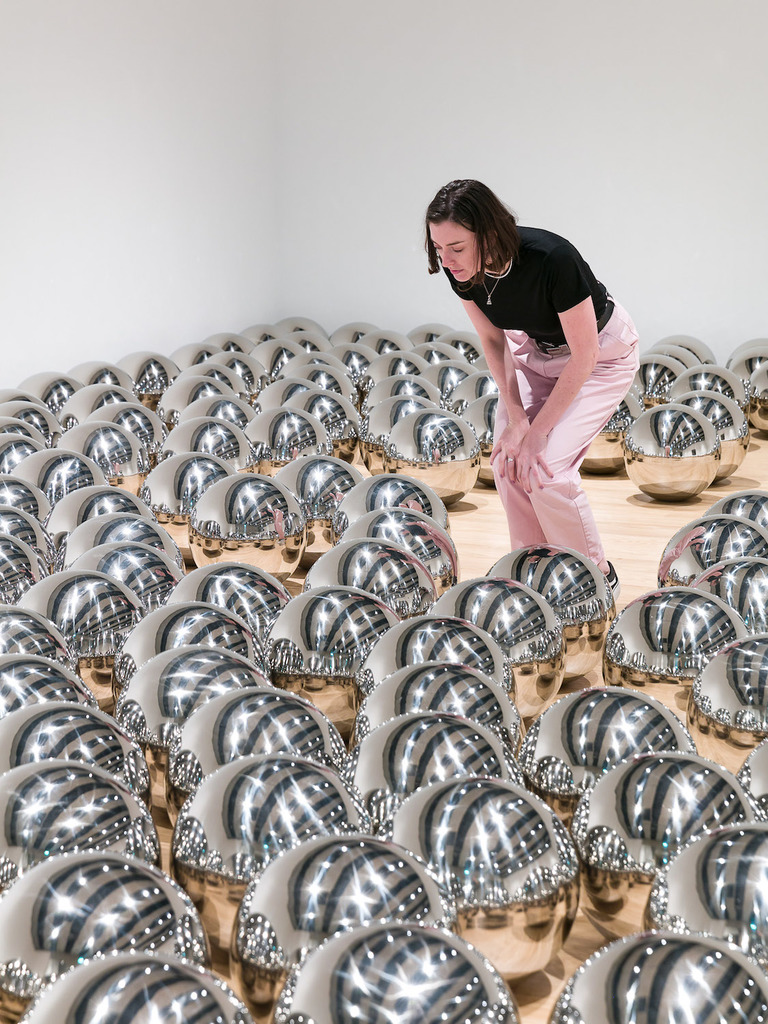 It’s probably worth sprucing yourself up before visiting Space Shifters, as you’ll glimpse your reflection in almost every surface of the exhibition. Perhaps Kusama had an inkling of how seductive these shimmering works might be; her ‘Narcissus Garden’ was originally accompanied by another work, ‘Your Narcissism for Sale’, which sold mirrored globes for around two dollars each. In a show where the work is looking at you, curated by the building it sits in, triumphs of trompe l’oeil abound – and ‘reflection’ takes on a whole new significance.