“Good VR has a proposition that is unique to VR. It sounds really obvious, but it’s key. It has to be better in VR, or only in VR.” So says Google’s Greg Ivanov. VR – techy shorthand for ‘virtual reality’ – has recently lurched into the realms of wide-reaching accessibility, as the technology becomes smaller, cheaper and more advanced. Suddenly, it’s not the preserve of science fiction (or the Sims – those headsets you could buy for your characters meant you really had it made, as far as I remember).

“Good VR has a proposition that is unique to VR. It sounds really obvious, but it’s key. It has to be better in VR, or only in VR.” 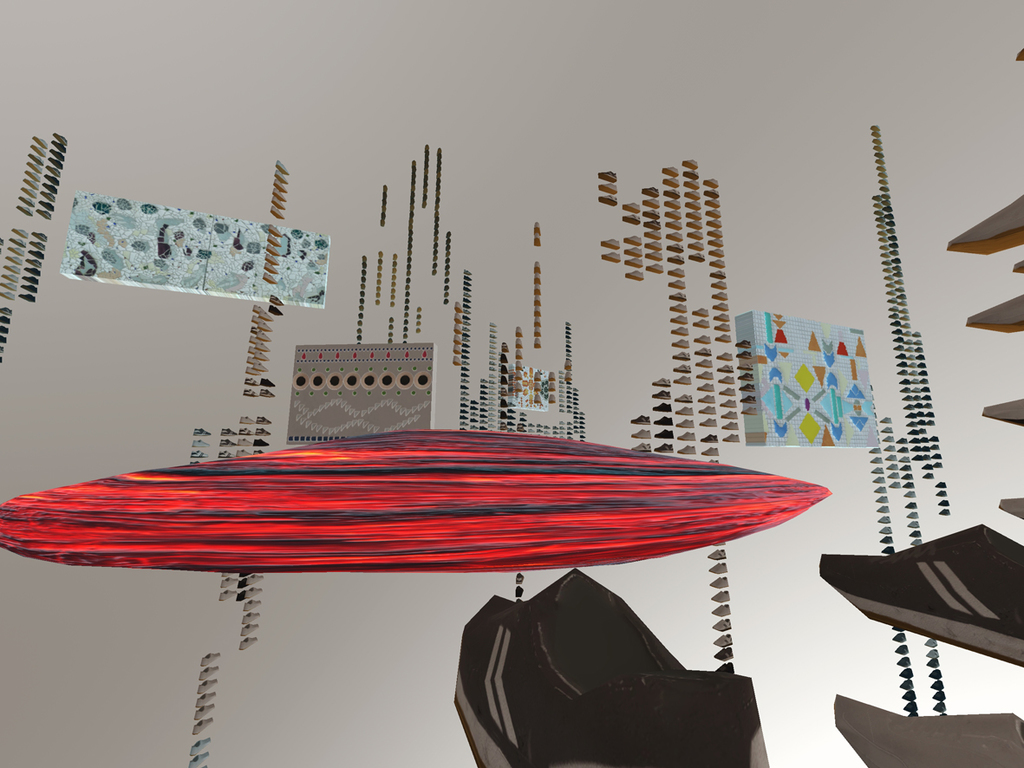 For the – still exclusionary, but falling – price of £499, you can bring Oculus Rift into your sitting room which in turn becomes anything a programmer can dream up. The technology is still a little clunky and restrictive, but those are wrinkles inevitably ironed out as more time and resource goes into perfecting this wonder-tool. The possibilities are endless, and they’re not just being applied to video games. VR is used extensively in exposure therapy for people suffering with anxiety or paranoia. It’s been picked up by the porn industry, by fitness gurus who want to trick us into exercising by proposing a skiing trip through virtual snow-scapes, and educational bodies who want to interest kids in astronomy by catapulting them straight to Jupiter (in a classroom). The potential implications are literally infinite – as varied as reality itself. A whole new sphere of ethics opens ahead of us. So what do you want to see?

VR has made as much of a splash in the art world as anywhere else. In fact, it’s the sphere in which Ivanov’s thesis can best be applied. Maybe one day this will change, but, for the time being, a virtual fireplace is no substitute for a good old-fashioned analogue version. Sex with a computer simulation is unlikely to satisfy most people as much as the real deal, unless pixels happen to be your thing. The application of VR to art, however, has the potential to revolutionise the way we think of the subject itself. Much art deals in speculation and reframing, pushing its audience to contemplations of the unfamiliar and unknowable. It’s a matter of taste as to whether looking at Dali’s melting clocks on a canvas would be an inferior experience compared to turning around and ‘seeing’ one close enough to reach out and touch, but I’d argue it’s not helpful to cast the lens of VR over what we’ve made in the past. Rather, best to think of it as a whole new toolbox, able to communicate ideas in ways we couldn’t have conceived of a century ago. It has the potential to be as revolutionary to art as the invention of photography or the internet, and this is a proposition which ZAP on Dover Street has embraced wholeheartedly. 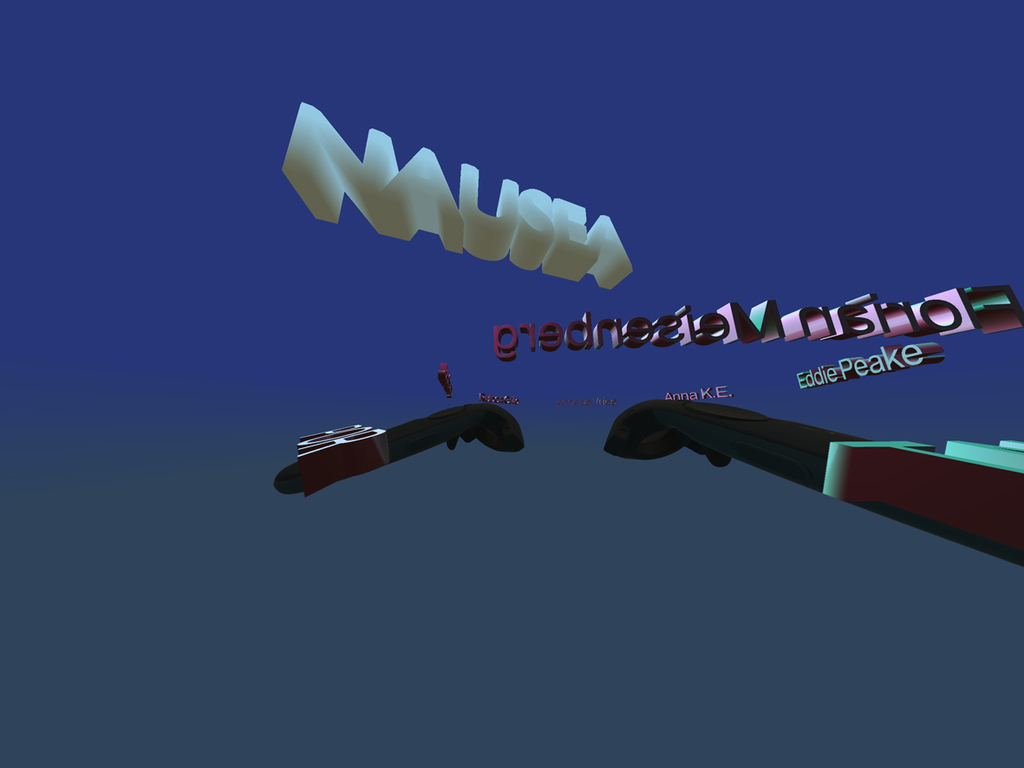 From NAUSEA at ZAP, 41 Dover Street

With this in mind, I headed to their opening show: aptly named NAUSEA. The exhibition promises “six of today's most exciting contemporary artists who have created work in response to the most sophisticated Virtual Reality available”, and it doesn’t disappoint. In fact, I’m surprised by how effective the experience is. It’s my first time dabbling in immersive VR; with outsize goggles and headphones in place, I’m handed two controllers which move with me – incidentally, the only physical trace of my own body left in the worlds I’m about to enter. I begin in a kind of menu limbo, where six names float in a circle around me. It is explained that I can reach out and tap one to enter the artist’s simulated universe. More than this, I can open portals, teleport(!) and interact to lesser or greater degrees with what I’m about to see. Off we go.

The first world is one conceived of by Jack Strange. I’m told it arose from the artist thinking about characters in conventional computer games, animated and instrumental and then doomed to return to the strings of code from whence they came as soon as the programme is shut off. The virtual space is entirely monochrome and populated by humanoid figures, repeating various tasks in a way that smacks of Sisyphus. Their faces are nothing more than lines for eyes, nose and straight mouth. They are neither happy nor sad; they are without motive or emotion as they throw boulders, flick switches or literally run on a kind of hamster wheel. They don’t react to me, but this is no impediment to verisimilitude or enjoyment – on the contrary, their indifference to my presence only cements the impression of their commitment to their work. This is their world, not mine. 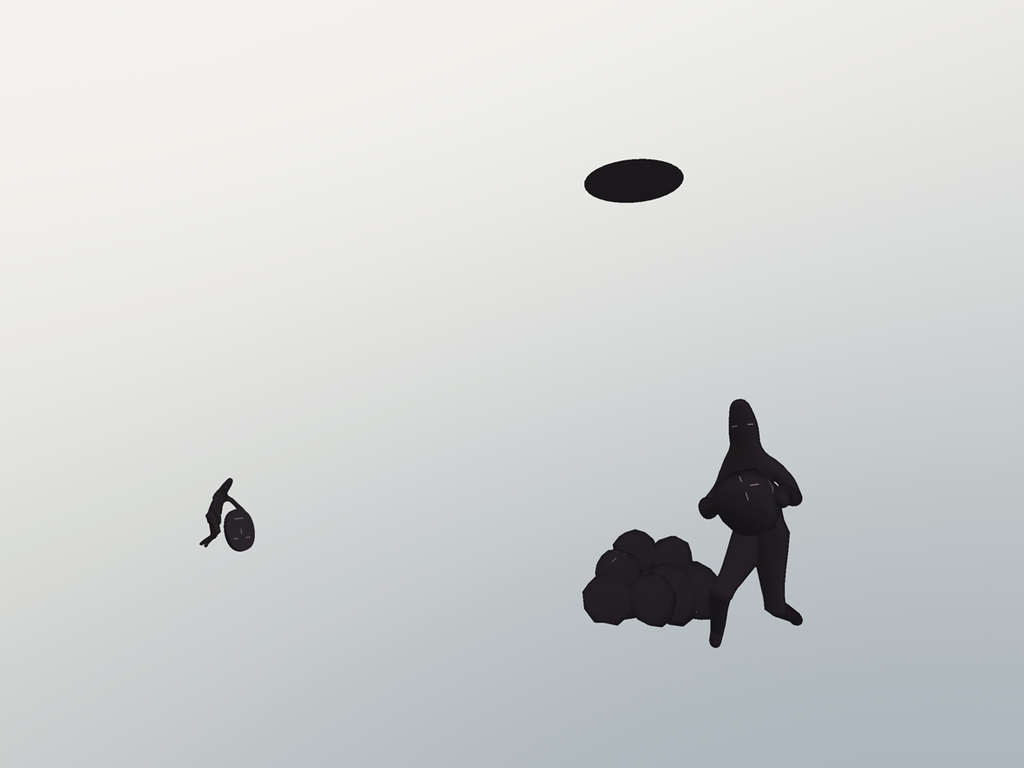 I exit Strange’s existential vacuum and head into Florian Meisenberg’s ‘Untitled’, 2016. This space is much more intense than the first – I’m stuck in a kind of quadrilateral made of glass, which keeps attracting condensation no matter how much I wipe it away with my virtual hands. The speed of my movements corresponds to a soundtrack, a girl shrieking ‘oh my god’ in my ears as she approaches ecstasy. It’s a little uncomfortable, but both my necessary input and her corresponding feedback serve to make one’s experience of this world all the more affecting. Through the breaks in the blur, I can peer out of my transparent cage at screens all around, running videos from Meisenberg’s own body of work. It’s a smart way to get around the limits of this VR’s technology, which still glitches every so often if I walk too far one way or another. A video within a simulation can be rendered as perfectly as a video outside one. I have to fight to catch glimpses of each as my invisible partner’s moans ramp up the tension. It’s a lot, and I’m surprised to find myself a little overwhelmed.

A whole new sphere of ethics opens ahead of us. So what do you want to see? 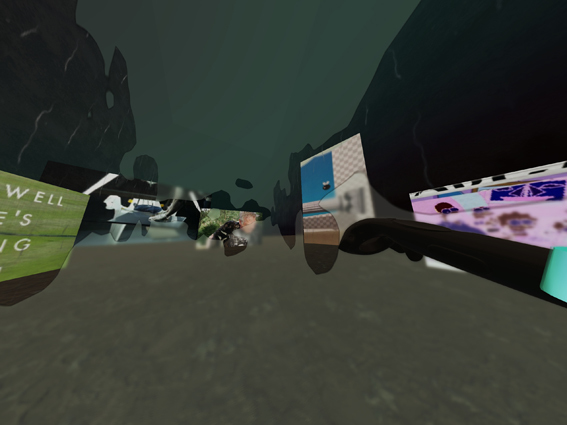 After Meisenberg, the initial calm of Eddie Peake’s ‘Bendyman’ comes as a relief. Here is a world that seems to be made of objects in space, reflected both beneath and above themselves (hard to explain, but that’s why it’s so effective: “only in VR", after all). I can reach out and touch them – pick up a toothbrush and throw it across the emptiness. Rachel Cunningham Clark, assistant curator of the exhibition and my guide for this foray into the unknown, is speaking to me from somewhere outside the space I’m experiencing. “This room does funny things to people,” she explains. “One guy came into this work and just started ‘tidying’ all the objects up.” The objects here include a knife and a hatchet. “Some people just go straight for the weapons”, Clark continues. “There are no consequences here, and it’s amazing the variety of impulses we see in the participants.” (For what it’s worth, I went straight for a smooth digital pineapple; analyse that.) 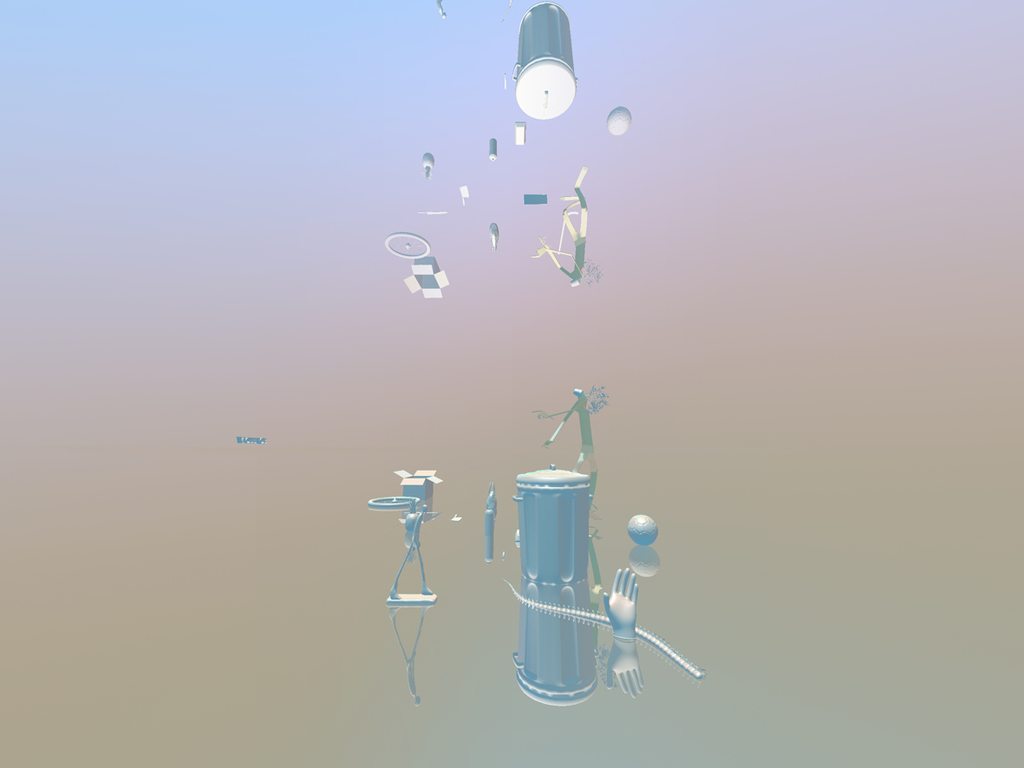 But where’s Bendyman? I teleport over to a slumped figure on the floor of the space, and tap a word hovering in the air near it: DANCE. Loud, fast music shoots into my ears as the figure leaps to his feet and dances jerkily across his reality and through my own body. Turning my head, I see the word I enacted has changed: VIOLENCE. I reach out to touch it and Bendyman collapses to the ground. I have power in this world which I do not have outside of it – of course, it’s severely limited, basically conscribed to alternately animating and killing Peake’s trademarked character. Nonetheless, this is the first simulation in which I feel the personal implications of VR. On a human level, perhaps more than an artistic one, the ability to interact with a whole new universe is surprisingly enthralling. 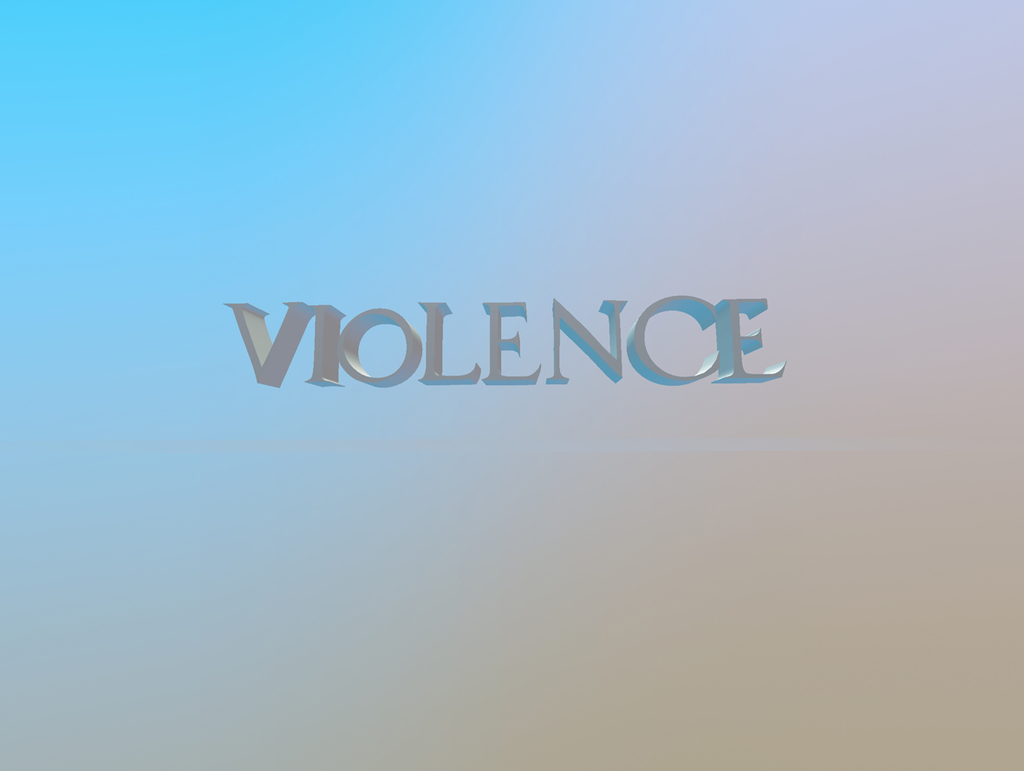 Time for Anna K. E. It’s epic; the largest virtual world of the six and operating on a y as well as an x axis: there is no ‘floor’. I can travel up and down as well as walk left and right. Stacks of trainers, hovering neatly one on top of the other and extending into the distance both above and below, are punctuated by simulated works made of what looks like mosaic. These resemble pieces the artist has made in the physical world, I’m told. Like Meisenberg and his videos, Anna K. E is explicitly looking to VR as a new way to display her existing oeuvre. Here, there are no confines of budget, dimensions or the realities of installation to consider. Once the programmer has his brief, he can construct anything the artist dreams of. The rules are different here, in that they don’t apply; in Anna K. E’s world, we encounter the sublime amongst the absurd. As I approach the lower half of two naked mannequins floating in space, a river of lava pours ‘across my feet’. A storm rages to one side, which turns into a flurry of snowflakes, and finally into a tsunami approaching from my left. I brace for impact.

As I approach the lower half of two naked mannequins floating in space, a river of lava pours ‘across my feet’. 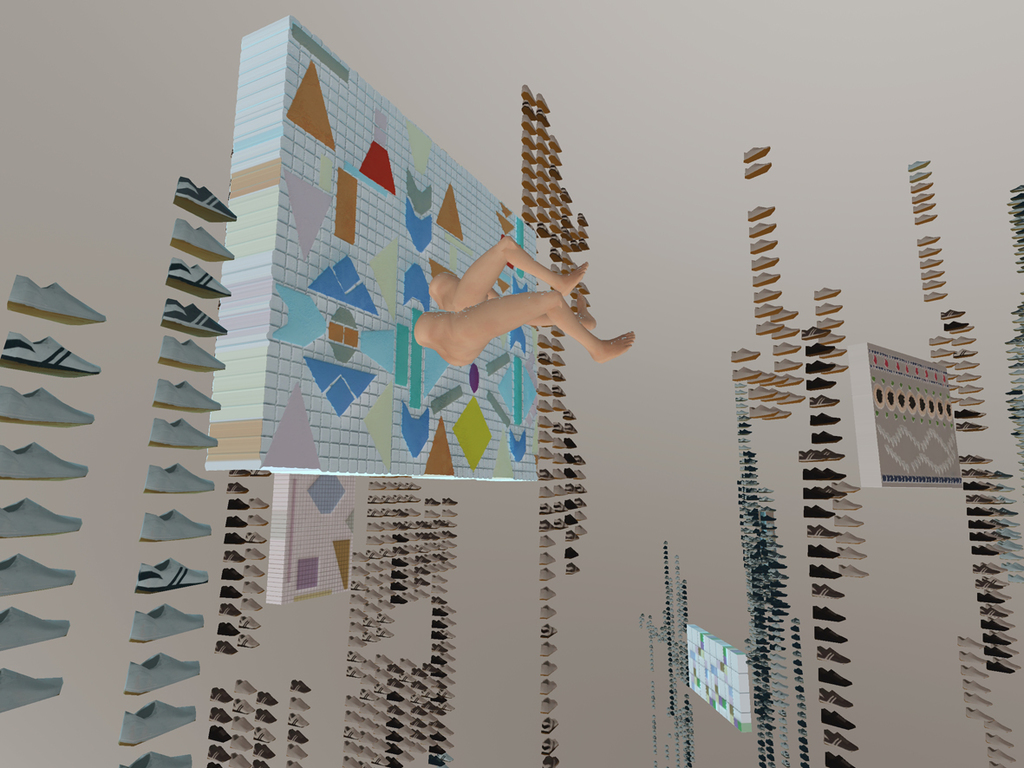 The theme of the natural world – and its limits – extends to Anne de Vries ‘Extreme Body Shiftrz’. I’m standing on nothing, in the middle of the cosmos. In front of me is a naked female form who suddenly grows to tower above my head, gains a penis, all the while changing skin colour and weight. This is the only simulation which involves an explicitly human interaction, and yet the human I’m encountering is morphing from one state to another at a rate of knots, unlike anyone I’m likely to meet in my own reality. At her biggest, she’s the size of a goddess. At her smallest, she’s up to my bellybutton. She is all races, sizes and genders – a proposition for the future of humanity, an infinite set of possibilities set amidst the awe-inspiring infinity of the universe. Cool! 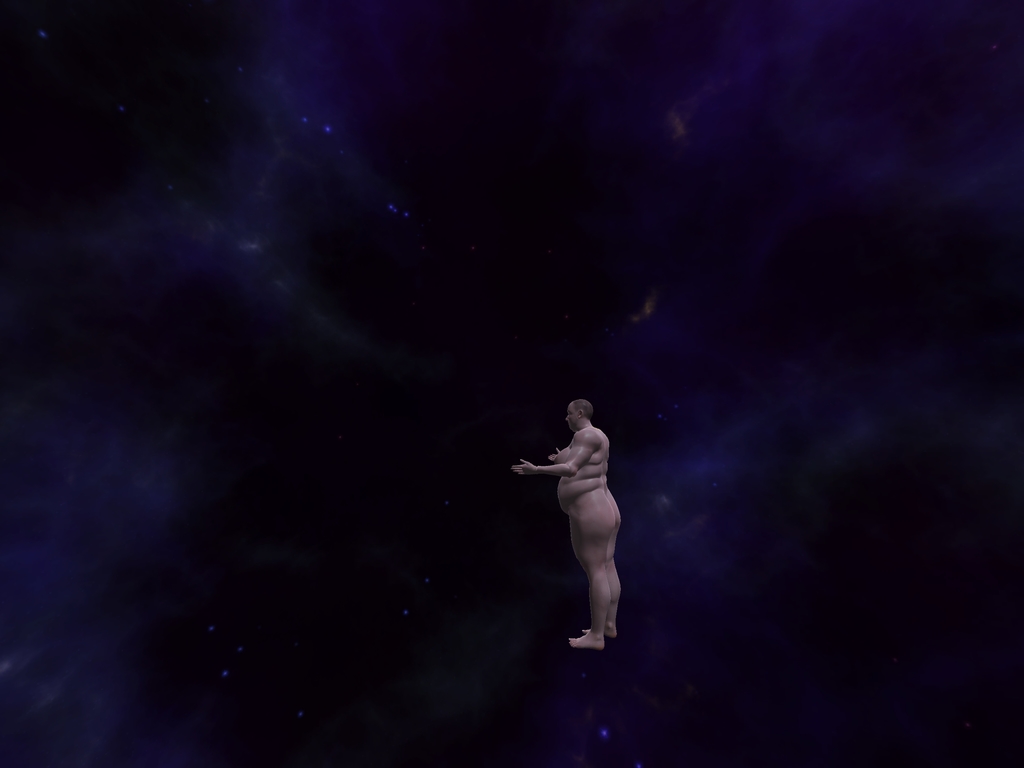 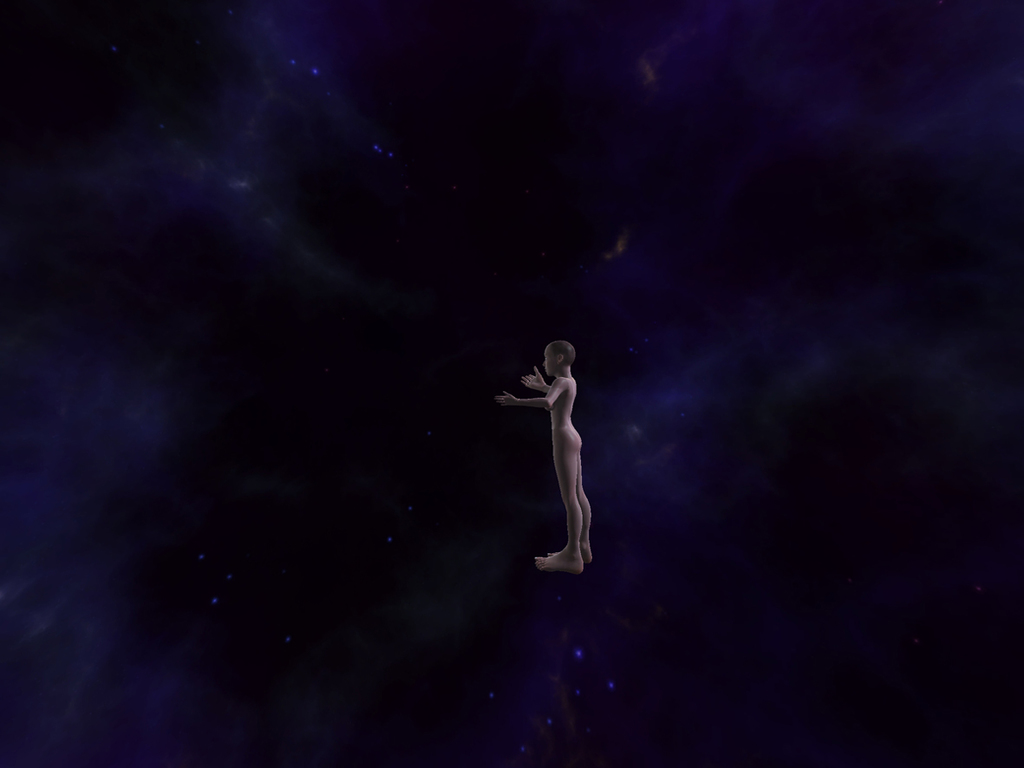 Last is Ruben Grilo’s ‘Begin With a Spin’, 2015. Undoubtedly the quietest of all the simulations, it consists of a (particularly well rendered) office room, with a desk, chair and ornaments. Walking its length, I discover a broken elevator, drawn directly from Charlie and the Chocolate Factory and coyly inferring all the tale’s adventure with none of the action. If only I’d arrived earlier, I would have seen the elevator crash through the roof! As it is, I’ll have to make do with stasis. ‘Begin With a Spin’ makes me realise how easy we are to trick. I want to look at a document on the desk, but I don’t walk through it. I want to look at a print on the wall, so I skirt around a chair. Old habits die hard. 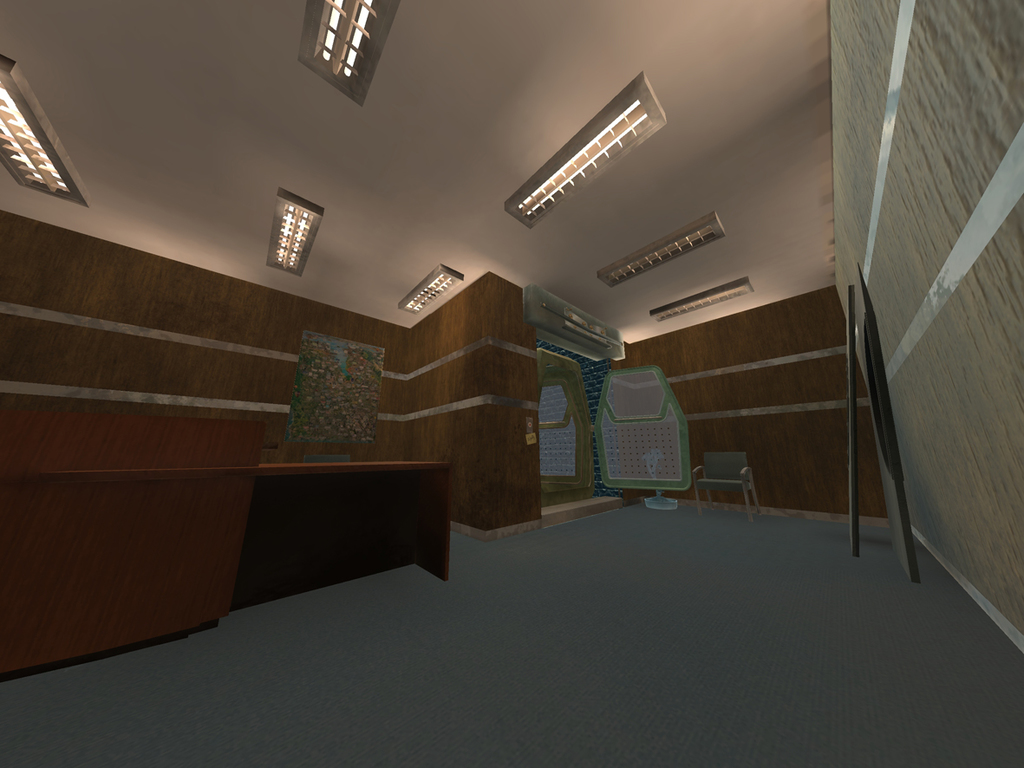 If only I’d arrived earlier, I would have seen the elevator crash through the roof! As it is, I’ll have to make do with stasis.

Ivanov’s right, I think. The most exciting moments in the exhibtion – both personally and artistically – were possible ‘only in VR’. Virtual reality and art make comfortable bedfellows; we’re long past the point in art criticism where technical prowess and realism are valued over clarity of concept. VR offers the possibility for someone to be immersed in a concept, rather than merely presented with it. In an age where we can call up the Mona Lisa on our laptops, a drive towards the experiential has pushed technology to run apace with performance and pilgrimage. VR weds ephemerality and convenience: popping on a headset is as easy as googling da Vinci, but allows an artist's vision to be translated in ways never possible before. Its arrival calls for new visions: not for simulation, but synthesis. 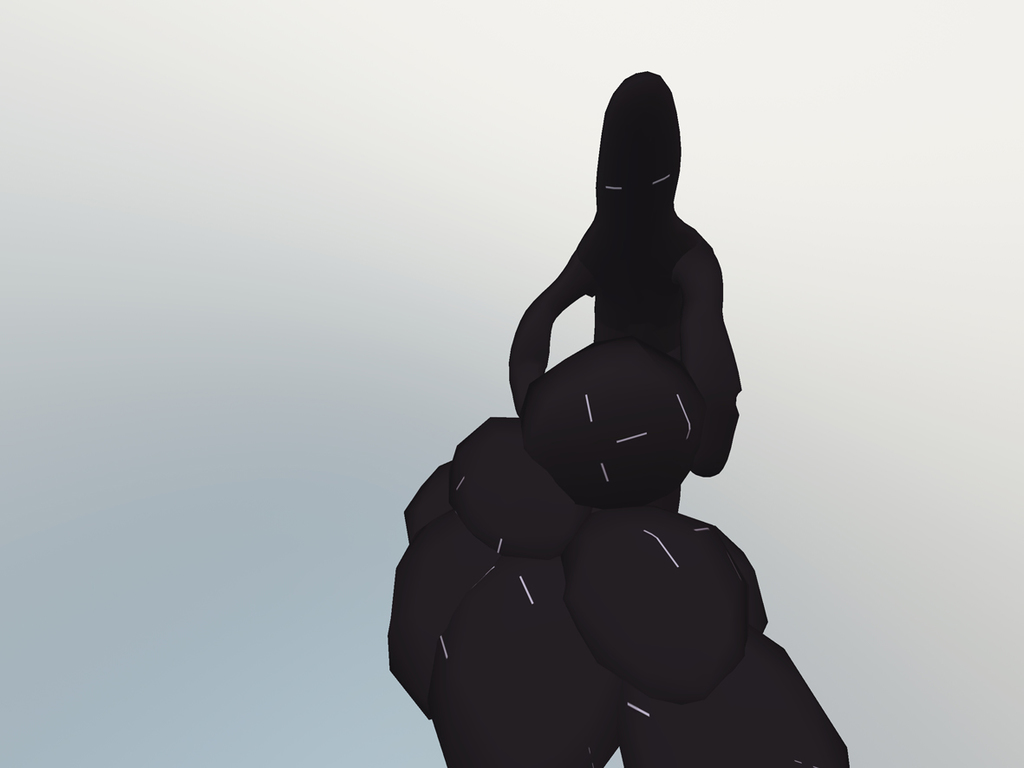