And lo! makeover shows were made over. An unobjectionable Japanese lady smiled upon them, and her name was Marie Kondo.

The participants have not undergone any exceptionally hard hardship, the stakes are low, and the drama is every-day. 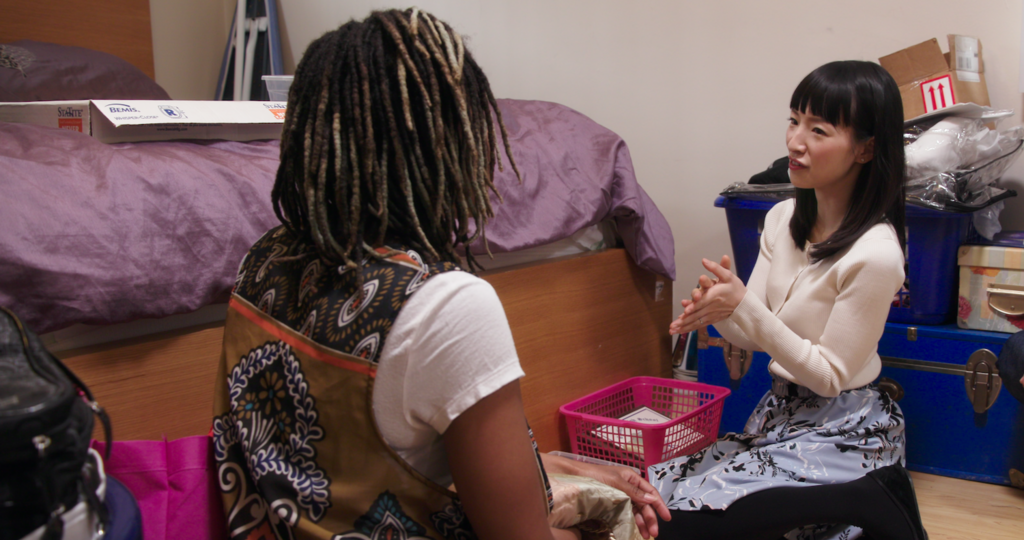 Makeovers have involved judgement as far back as Cinderella. Whether it be high and moral: she deserved a ball-gown instead of soiled rags, an appearance to match her beautiful nature. Or low and superficial: would I Snog Marry or Avoid? (as in BBC Three’s ‘makeunder’ show that ran from 2008 to 2013). Competitive: as in Changing Rooms (1996 - 2004), wherein couples swapped homes and decorated a room in the other’s house, while we decided which was more tasteful. Or cautionary: she really shouldn't have visited such a cowboy surgeon for that third nose job.

Compared to these earlier shows, then, Tidying Up with Marie Kondo is anything but extreme. Like its diminutive title suggests, the show is quiet and unassuming. A typical episode is exactly that: ordinary. Paradoxically, that's what makes it sort of radical. This Atmosphere of Averageness sees the ‘amateur’ participants receiving most of the screen time, and ‘expert’ Kondo modestly stepping aside; unthreatening. The participants have not undergone any exceptionally hard hardship, the stakes are low, and the drama is every-day: a young couple want to impress their parents when they visit; a woman must remove her late husband’s jackets from the cupboard; a couple considering a third child ought to make a bit more space. There are no Herculean efforts to move mountains of domestic debris. There is no competition, not even ‘against the clock’ – some tidies are staged over months. The show’s by-line might as well read, Regular people do a normal amount of cleaning up. 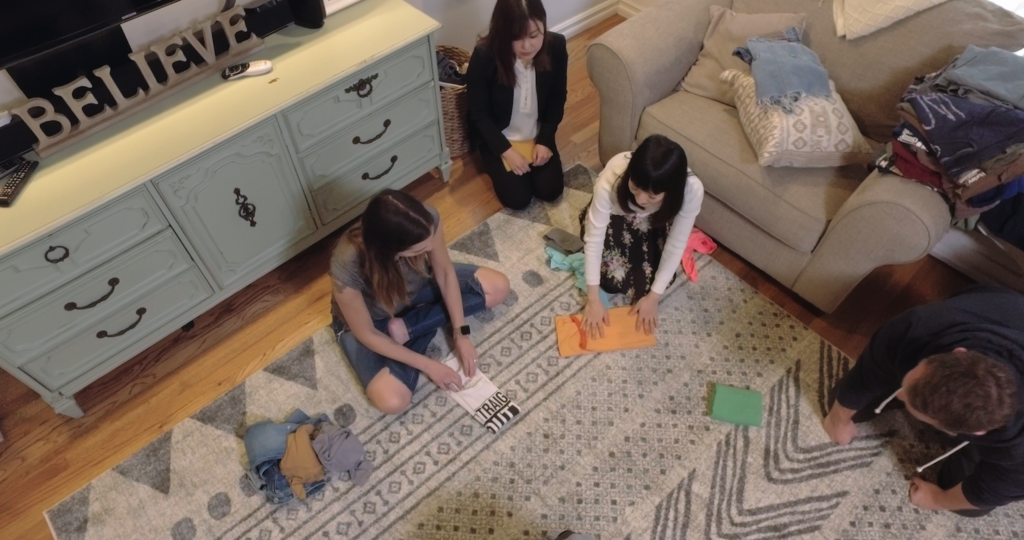 'There is no magic,’ Kondo tells one of her participants. She's not pretentious, unpresumptuous qua ‘guru’, and her method is as sensible as your neatest auntie’s is likely to be. In this order, Marie advises, go through 1) Clothes, 2) Books, 3) Papers, 4) Komono (miscellaneous items), 5) Mementos (sentimental items). Hold each item one by one, keeping the ones that ‘spark a joy’. This simple formula provides each episode’s iterative scheme. That's it. So why is the show so strangely compelling?

The main thing you have to know about Marie Kondo is that she genuinely loves tidying. Rather than the intense and neurotic way that, say, Monica from Friends fetishised cleanliness, Marie’s enthusiasm is natural and uncomplicated. She wears white cardigans and high-waisted midi-skirts, a minimalist rather than an ascetic – pragmatic on top with a flash of colour beneath. Remarkably petite (four foot eight) her size also seems significant, because she takes up so little space, and could herself be easily folded into a drawer. The breathy way Marie inhales ‘wow!’ would do well on an ASMR channel all its own. These gasps are the same from room to room, bookending Befores and Afters alike. The uniformity of sentiment and soundtrack makes for a flattened, almost Benzoid viewing experience; any transformation or epiphany is merely the outcome of Kondo’s process, which is itself the subject of her programme. Rather than hinging on drama and overhauls (incidental), Tidying up is more interested in, well, tidying, than tears.

What little drama there is slow-burns like incense. Every now and then a participant becomes flustered: I’m not sure about this t-shirt, what to do, what to do? Kondo’s answer: if unsure, keep it. It's only a t-shirt. 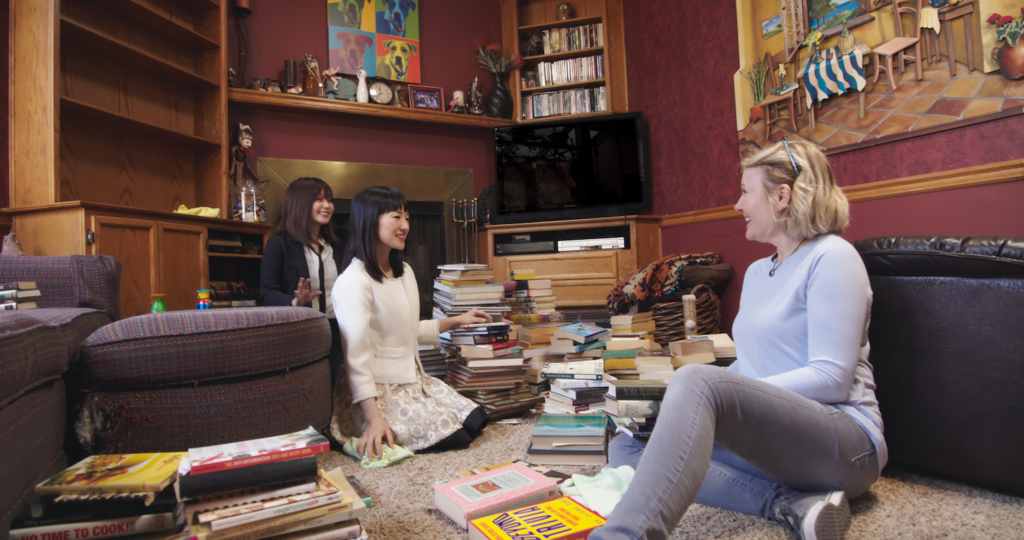 Each episode sees Marie take time out to ‘introduce herself’ to the house in question, finding a spot to kneel down on its floor. Marie has some vaguely Shintoist idiosyncrasies that we’re told not to take any notice of; instead we marvel as our host makes herself smaller still,. Whilst the standard Make-Over-Show blueprint sees the deeply personal exposed for our voyeuristic pleasure, Kondo’s ‘greeting’ draws a line. We are to be respectful in these people’s homes. Leave your shoes neatly by the door, please. What little drama there is slow-burns like incense. Every now and then a participant becomes flustered: I’m not sure about this t-shirt, what to do, what to do? Kondo’s answer: if unsure, keep it. It's only a t-shirt.

The accomplished Stoic divides experience into that which she can and can't control. Instead, she invests her emotion in the correct application of her choice – and Tidying Up with Marie Kondo sings from a similar hymn sheet. Unlike previous shows in the makeover genre, there is no pumpkin-into-carriage flimflam here; rather, in a tranquil register, we watch Marie do a bit of emotional hand-holding while ordinary people exercise their ability to make decisions. A reality TV program that repels our immediate judgement, asking instead that we examine the use of judgement itself, feels like the birth of a new sub-genre. At least, it allows fresh air to circulate amidst stale tropes like a good Spring Clean. 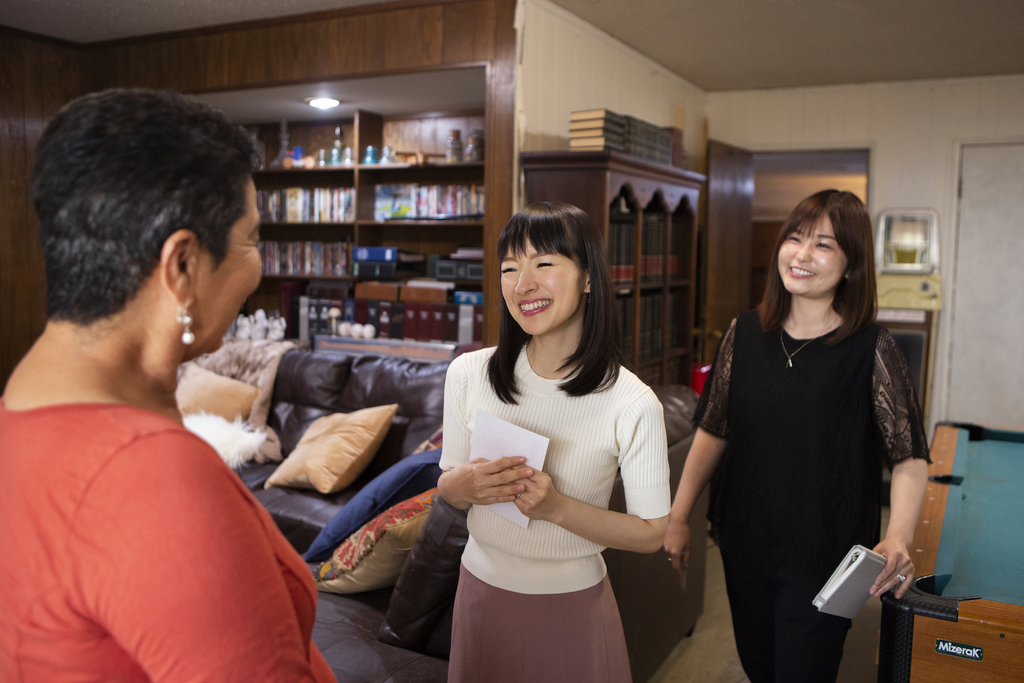 It remains to be seen, but maybe last year’s hit success Queer Eye and now Tidying Up represent the crest of a wave of new Reality TV, catering for a middle-class audience increasingly intolerant of intolerance: we want to do away with judgement and see our acceptance and empathy reflected back at us. I for one have mixed feelings: on the one hand, it's amazing fun to judge people on TV. On the other, and with our collective emotional bandwidth diminishing, an emerging kind of entertainment is seeing drama dialled down like a dimmer switch. Tidying Up asks nothing from its viewer. You can relax. Change will occur so quietly you won’t even notice. Next episode.