Recently I have become obsessed with the idea of going on a cruise. Rather sickeningly, this desire first started coagulating into something solid and urgent during the first lockdown. At exactly the point, in other words, when cruises came onto my radar for decidedly unluxurious reasons — colliding with news feeds as early harbingers of the coming Covid storm. After being riddled with positive cases in early 2020, both the ‘Diamond Princess’ and ‘World Dream’ were forced to drift for months in the guise of plague ships; the 7,300 passengers on them trapped in a strange modern purgatory. The thing is though, this only made me want to experience the heady rush of an extended time at sea more intensely, precisely because it seemed to expose the true nature of these aquatic pleasure trips. For aren’t cruises always a strange purgatory? Aren’t all holidays? 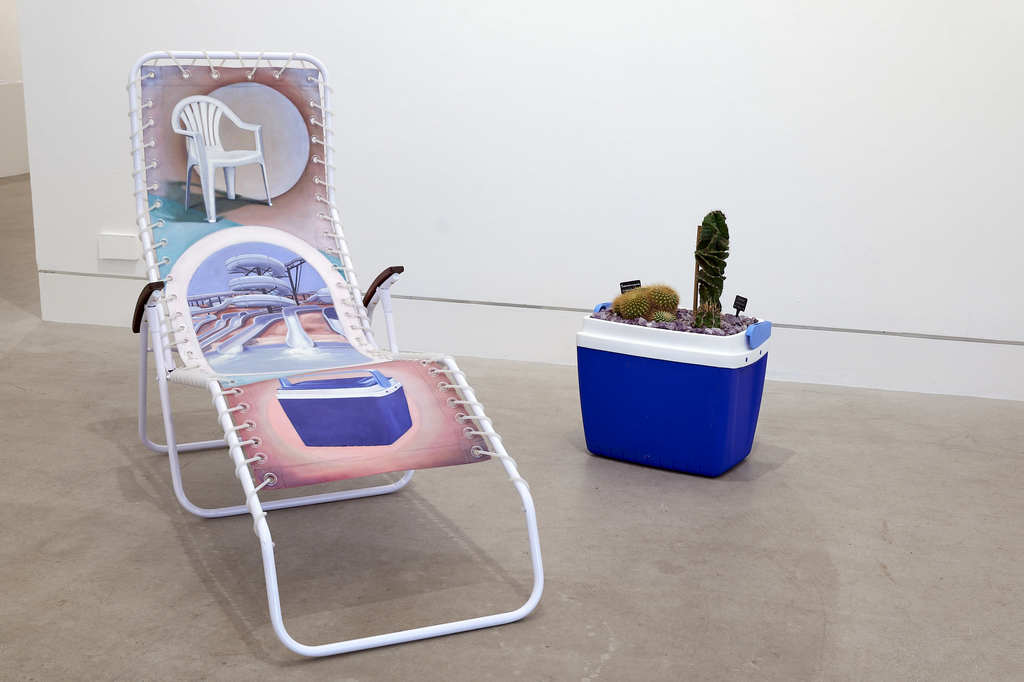 "temporarily lifted into another realm entirely"

The closest I have come to reaching the transcendent, surreal state I am certain a cruise would provoke in me, was visiting Lydia Blakeley’s solo exhibition, The High Life, at Southwark Park Galleries. Stepping out of Surrey Quays’ crackling heat and into the pristine white cube, I felt like I had been temporarily lifted into another realm entirely. What greeted me were sun loungers and cool boxes; cacti and crystals. Luscious paintings of oysters, sardines, and palm trees, with titles that could easily double as cruise liner names: ‘Daily Affirmation’, ‘Club Med’, ‘Silver Darlings’. I felt like I’d set sail from Southwark and arrived, instantaneously, in a sub-pocket of L.A. Suburbia, supercharged. 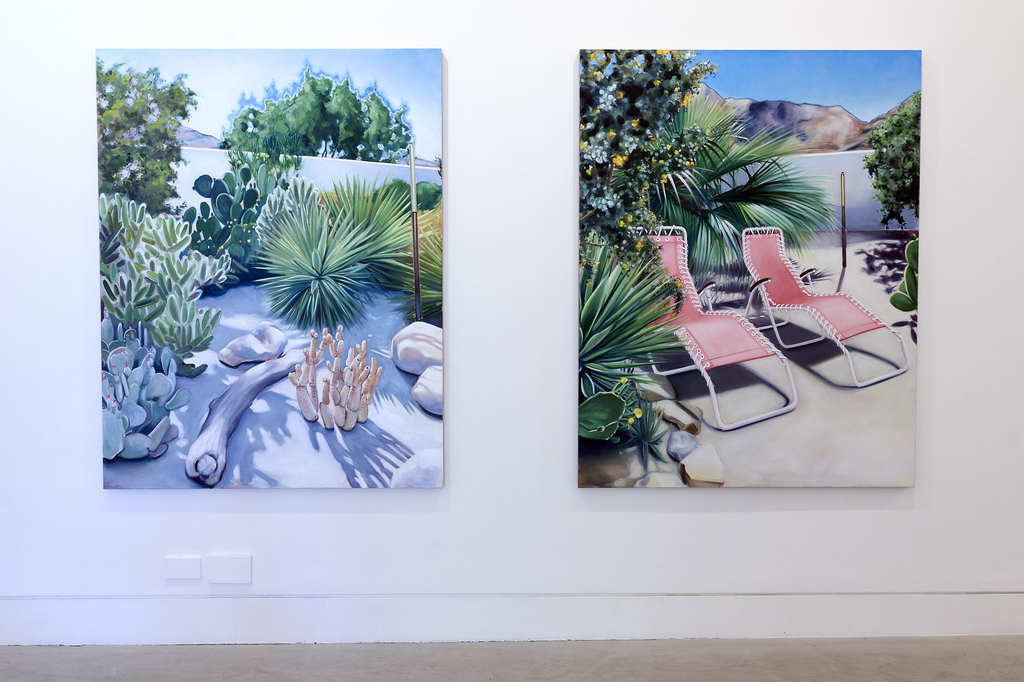 On the face of it, there could not be a more trivial subject than holiday-making, a more banal object of artistic study than a sun lounger, or a row of aeroplane seats. Yet, for Blakeley, the triviality, flatness, and bourgeois ubiquity is exactly the point. All the works in the exhibition are, explicitly, works of fantasy and projection — depictions of the ‘tourist gaze’.

In his groundbreaking book of the same name, John Urry brushes off any criticism that studying pleasure, leisure, and tourist travel is trivial. On the contrary, Urry suggests, ‘the camera and tourism are two of the uniquely modern ways of defining reality.’ Both, of course, rely on exclusion. Both involve choosing what is given attention, and what remains out of frame. Indeed, in the book Urry notes how ‘the typical tourist experience is… to see named scenes through a frame, such as the hotel window, the car windscreen or the window of the coach.’ Here, in The High Life, Blakeley plays with and exaggerates this idea. On one wall a large, dreamlike painting of a lavishly laid dining room – all crystal glassware, starched cloth and candyfloss pink roses – cuts off before the end of the canvas, leaving a strip of bare cloth enclosing the image all around, perfectly exposing the artifice of the image within the frame. Nearby, two small canvas frames each depict an aeroplane window, wing and open expanse of sky just peeking through. The doubling is clever, because, for any viewer with a smart phone in their back pocket, the scene has already been repeated under their gaze many times — as Instagram fodder, the social media equivalent of an Out Of Office. 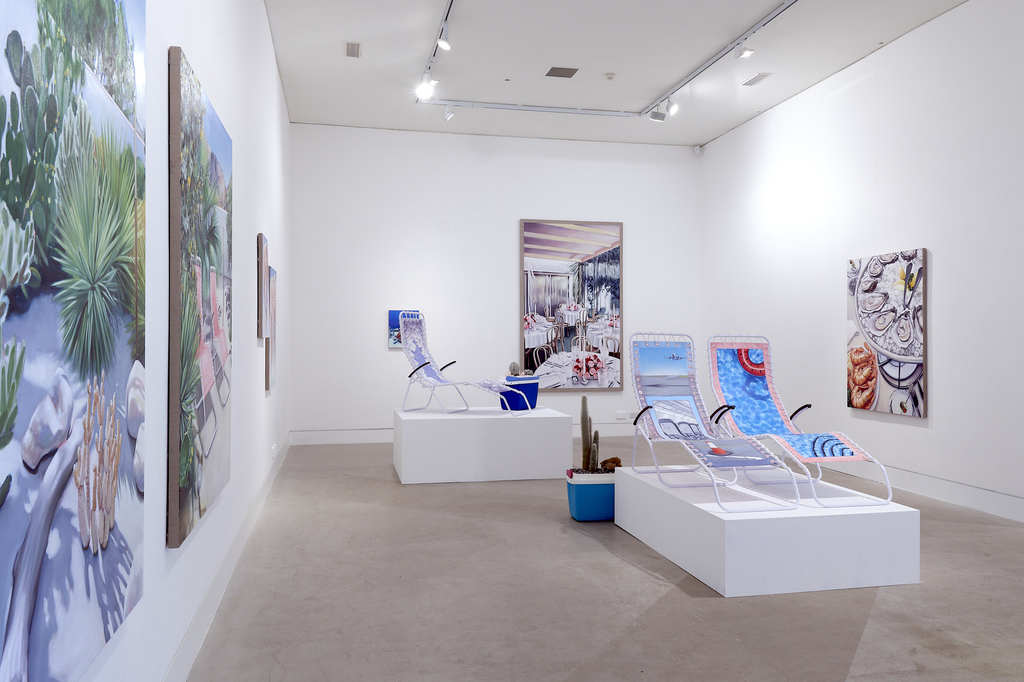 This is where the lush hyperrealism of Blakeley’s work takes on a Lynchian genius, as, truthfully, it is exactly this kind of Instagram fodder that is Blakeley’s fodder, the subject of her artistic gaze. The seeds of the exhibition grew during the pandemic, when people’s worlds shrank to fit a different set of frames, a series of ever-smaller screens: laptop, tablet, phone. And what often populated these screens? Images of infinity pools, oysters on ice, lapping waves. Travel became impossible, but images of sun-drenched scenes spread like wildfire; like a virus. Using imagery from holiday websites and package holiday adverts, Blakeley’s intention is to ‘suspend those fleeting and aspirational scenes’ for the viewer’s contemplation, and to reveal the surreal nature of these digital escapist fantasies. So, her paintings are not of the Hollywood hills, but of the uncanny valley. They are truly utopian – of ‘no place’. 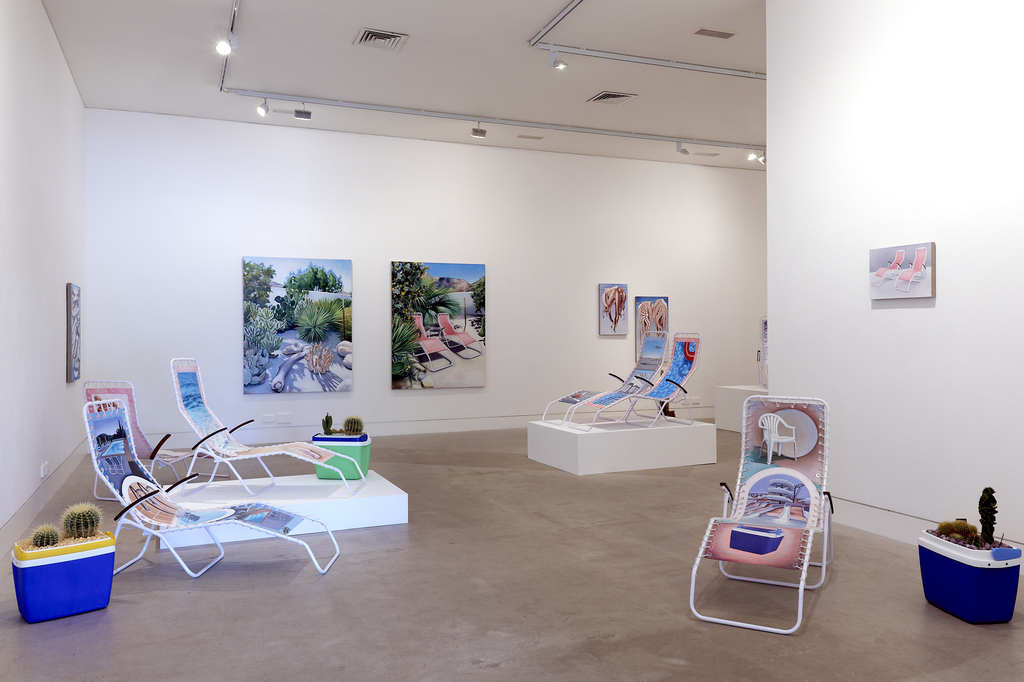 Blakeley’s works revolve around the romantic tourist gaze, which, as the exhibition notes emphasise, is 'projected as private, in solitude, and almost spiritual in its surroundings'. It is a gaze that is at once enchanted and emptied. Deserted beaches, still pools, uninterrupted views. The pure essence of fantasy, with no messy reality crowding in and spoiling the scene. It’s no coincidence that Blakeley was drawn to these digital scraps of escapism at the same time I was drawn to kitsch and ready-packaged cruise journeys, at the same time as lockdown. Naturally, the desire for escape becomes more acute the more tightly you feel yourself constrained. Finding myself in my own strange purgatory, my lockdown bubble, just the thought of trading my surroundings for another, more surreal, excessive and heightened limbo was tantalising. Wasn’t I, in some sense, already all at sea? 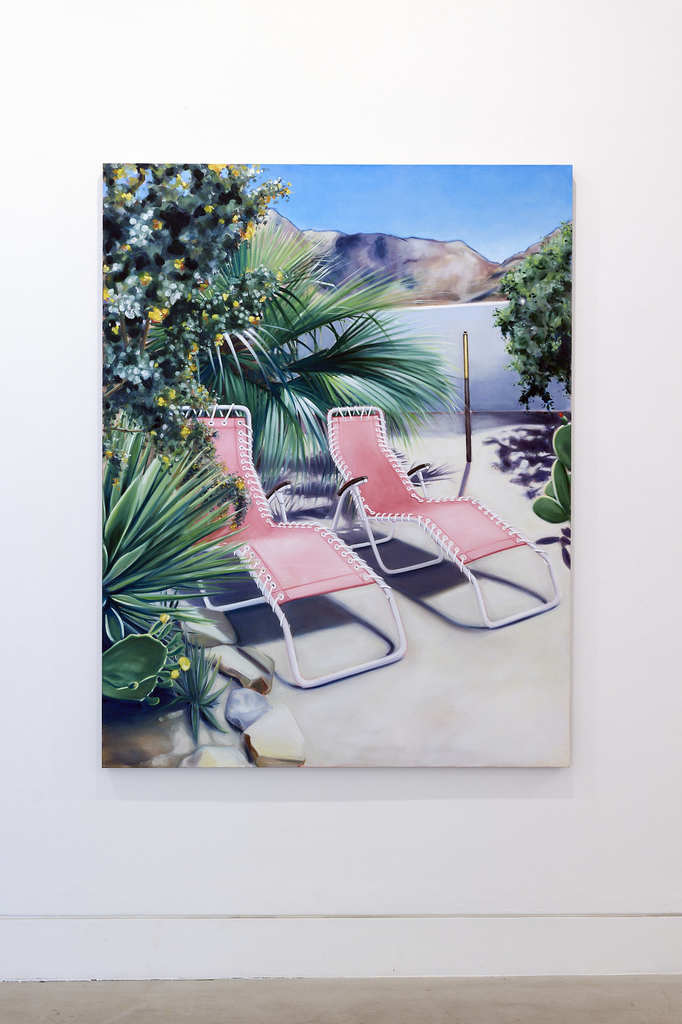 Of course, this heady mix of dissatisfaction and desire is the marketeer’s dream. In lockdown, people looked for moments of respite and release, and corporations and algorithms fed hyperreal stock depictions back to them, creating a feedback loop between image and desire: I want it so I look; I look so I want it. 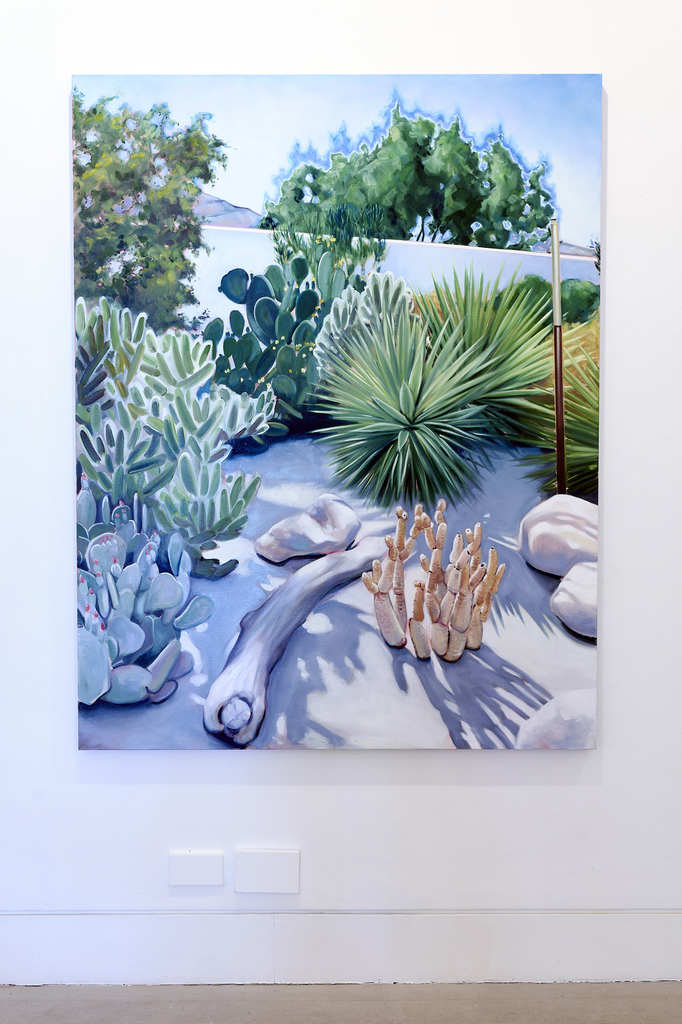 In The High Life, Blakeley creates her own feedback loops. Paintings of clear water and sea creatures on sunloungers, in front of paintings of sea creatures and sun loungers. And those cool boxes full of crystals — rose quartz for love vibrations, amethyst heals the spiritual body, green calcite cleanses negative energy. Yet, of course, just as leisure presupposes its opposite, namely regulated and organised work, crystal ‘healing’ presupposes psychic damage. Quartz and calcite glinting in cool boxes near an image of a traffic cone on a runway — Blakeley’s exhibition seems to wink in the face of the tourist gaze, hinting that a relentless quest for positivity, and a purging of all negatives in service of a more pristine surface, can only ultimately emphasise that this can never be accessed or achieved. What’s under the surface, or just outside the frame? Where does fantasy end and reality begin?

At the beginning of the third edition of Urry’s book – The Tourist Gaze 3.0 – he quotes a visitor looking at Victoria Falls. Reality and image collapse under their gaze; fact, fantasy, and fictional frame become one, as they exclaim, ‘Wow, that’s so postcard!’