At first glance, the painting currently in pride of place in South London Gallery’s main exhibition hall is a thing of beauty. The large, square canvas is covered in an elegant mix of dusky purples, blues and greens, with a few vibrant flashes of red, ochre and white thrown in. The piece is painted on Lugubo bark cloth from Uganda: the material is stitched together in irregular sections, and its dark surface shows through where the overlying planes of paint don’t quite meet. The effect is luminous and mysterious, rather like a stained glass window. But once you decipher the subject matter, this surface harmony is abruptly shattered.

The effect is luminous and mysterious, rather like a stained glass window. 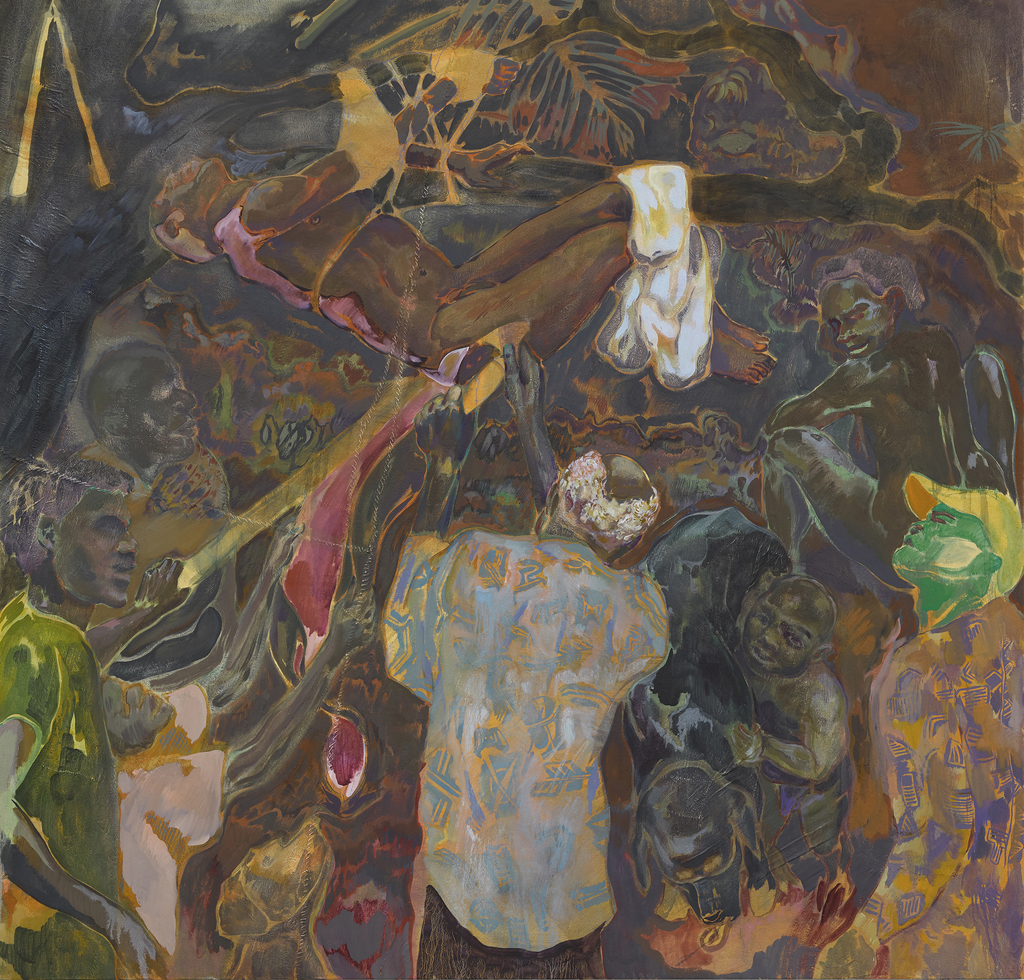 Lurking in this patchwork of paint are various figures. A naked woman and child, several men in what look like army fatigues, and a couple of large dogs gather at the edges of the scene. They stare expectantly up at another man, who is stripped and bound to the branches of a large tree. His arms and legs are outstretched, and his head is flung back in what could be agony or ecstasy, while a white-haired elder in a patterned shirt reaches out to touch him. It takes a little time to grasp what he is doing, but when you do, the shock is profound. He is working at the captive’s skin with a knife, paring off a livid red strip of flesh. This is The Flaying of Marsyas – a barbaric scene from Greek mythology, updated to something like the present day, and camouflaged in a beautiful coat of paint. 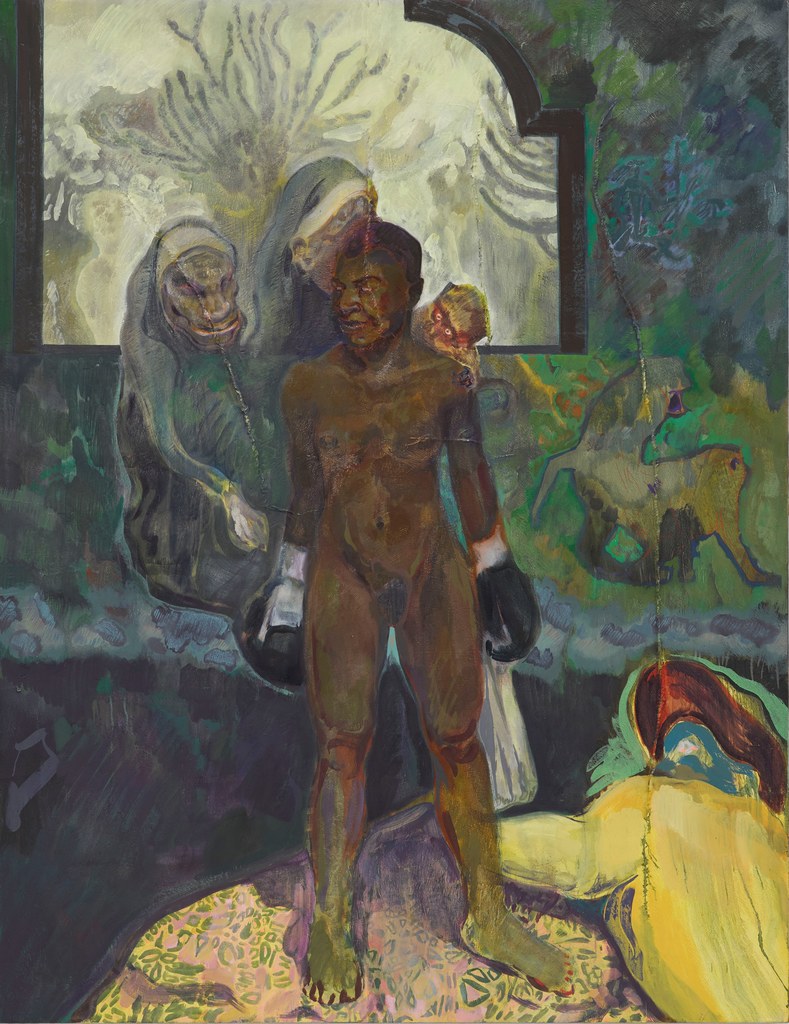 Marsyas is the first work you encounter in ‘The Chapel’, South London Gallery’s powerful exhibition of paintings by Kenyan-born, London-based artist Michael Armitage. The room looks rather like a chapel itself (it was this resemblance that inspired the exhibition’s title), and if it were, Marsyas would be its altarpiece, commanding attention from the far end of the room. More paintings are arranged on the side and back walls. In scale, colour, tone and atmosphere they are similar, and all of them display the same unsettling mix of surface beauty and enigmatic, sometimes threatening scenes. But whose chapel is this, and to which gods? The art you find in religious houses is usually designed to clarify and glorify a particular set of beliefs. Armitage’s scheme does quite the opposite.

But whose chapel is this, and to which gods? 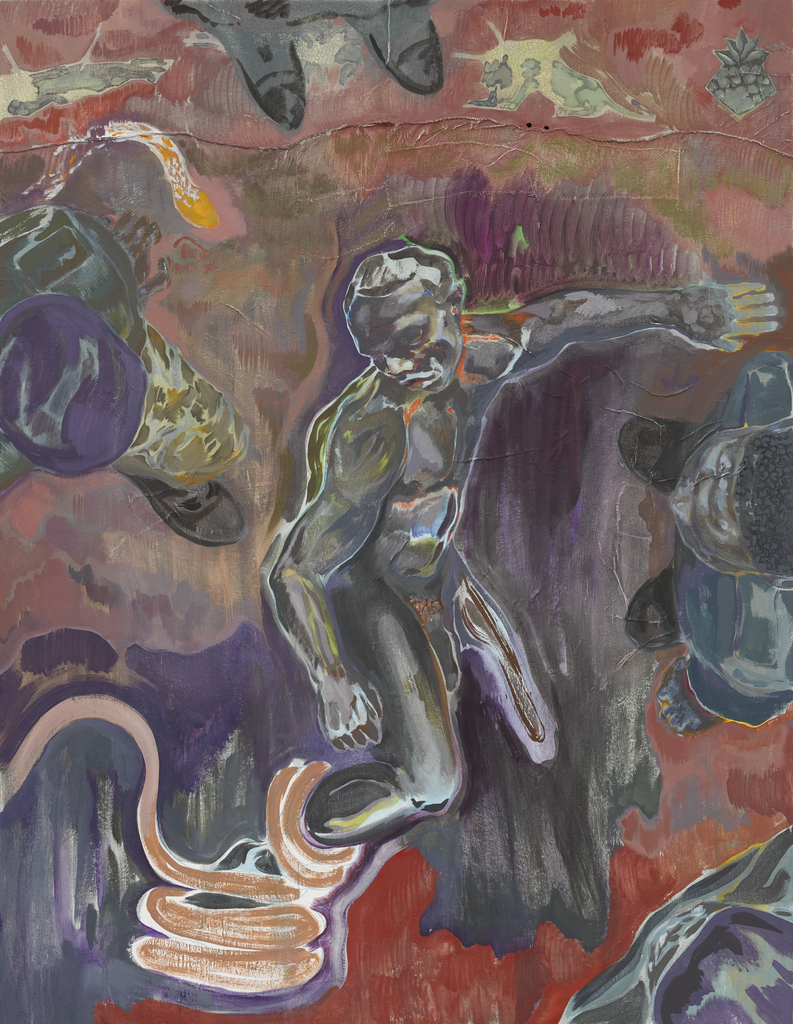 Take the three paintings grouped together on the right-hand side of the room. Each displays a central figure in full length, rather like saints in a triptych. But their specific meanings and the relationships between them are unclear. The first, Nyayo, depicts a man who appears to be dancing or jumping, until you notice the group of figures encircling him, painted from above: in fact, the man is writhing on the floor. Next up is Conjestina, in which a woman, naked but for a pair of boxing gloves, is attended by bestial creatures in nuns’ habits, and two copulating baboons. The final painting, hope, depicts an older woman who seems to have just given birth to a donkey or fawn. The animal sits weakly on the floor, umbilical cord still attached.

What are we to make of these strange rituals and miraculous conceptions? The gallery notes provide some clues. Nyayo was inspired tales of the mistreatment of political prisoners during the rule of Daniel arap Moi in Kenya. Conjestina Achieng is a famous Kenyan boxer, who is subject to uncomfortable amounts of media attention – and indeed, she looks uncomfortable in the painting as her attendants inspect her. The figure in the third painting is said to ‘question the impossibility, in East Africa, for one generation of farm labourers to the next, to secure more lucrative forms of employment.’ 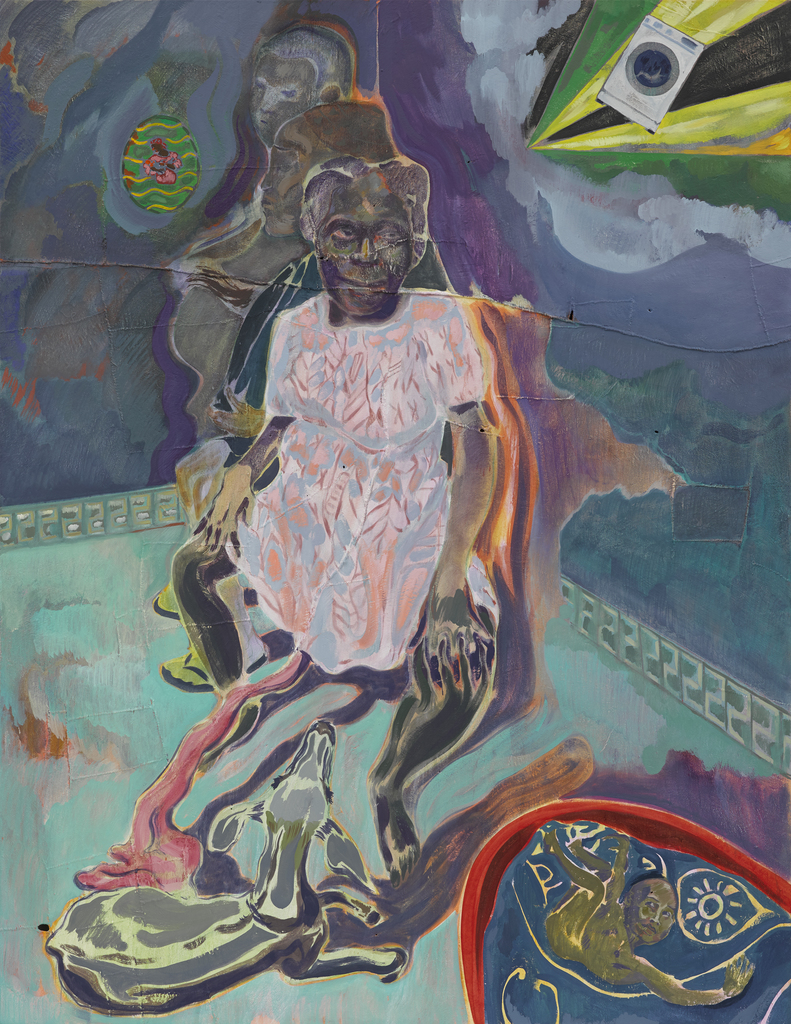 But these are only partial explanations. Armitage spends long periods each year in Nairobi, following local media and popular culture, and sketching, filming, photographing or observing the people and places that populate his compositions. But he completes the work back in London, and in the process a host of other influences creep in, not least from Western art history. Conjestina, for example, is based on Watteau’s unhappy Pierrot; there’s a touch of Goya about the elderly woman in hope; and let’s not forget Titian’s harrowing depiction of Marsyas, which was one of the sources for Armitage’s version. All of his paintings have at least a hint of Gauguin to them, too, in the vibrant but earthy colours, the visionary or dreamlike character of the scenes, and in their problematically ‘exoticised’ beauty.

This confusion of references is, of course, deliberate. Ambiguity is Armitage’s signature. His own experiences of living in both Africa and Europe have made him acutely aware of how different cultures are defined, and define themselves over time. As he puts it in the catalogue: ‘The importance of having multiple cultural narratives as a part of the wider conversation cannot be overstated.’ His trick is to stitch several of these narratives together at once, so that they stop seeming coherent, and start to contradict each other. Scenes that you might expect to see as documentary footage – such as the violence in Nyayo – take on a whole new aspect when painted as Gauguin might have done. The story of Marsyas, transposed into contemporary East Africa, suddenly gains a political edge. But if Armitage’s painting speaks of the violence and conflict that has troubled the region for decades, it also reminds us of the violence and conflict that has characterised Western civilisation from its earliest days. Why do we have such differing expectations of how things can and should be depicted? Why is it so uncomfortable when those expectations are frustrated or overturned? Isn’t this medley of beauty and ugliness, history and the present, spirituality and violence, a truer reflection of the confusing reality of human life and thought?

Armitage’s work is deliberately enigmatic, and try as you might, untangling the web of associations that he weaves into each image is impossible. 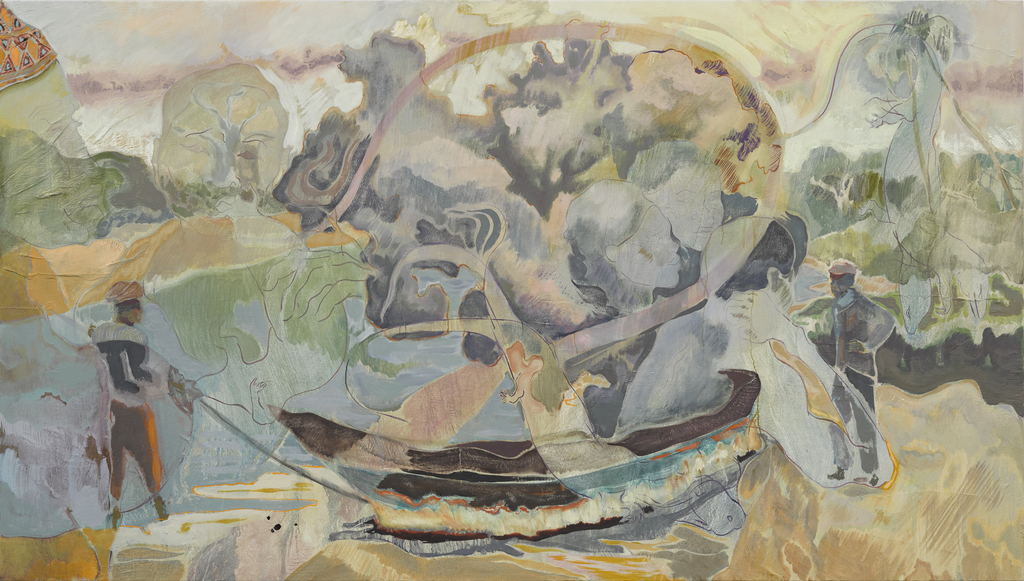 Armitage’s work is deliberately enigmatic, and try as you might, untangling the web of associations that he weaves into each image is impossible. Some of the references will be familiar, others will be new, and the key thing is that, as he paints them, all of them are shown to be strange and incomplete. What makes his work so memorable is how his style of painting drives this fact home. You have to look, long and hard, at his compositions to pick out their details: focus on one, and another will slip out of view; try to trace the edges of a figure, and you’ll soon find yourself following a different line of thought. Armitage has built this instability into his practice, and he relishes it. As he puts it: ‘I would like all of the works to be different, but also unified. Different in the sense that every day is different, different in that experiences are always different: I’d like the work to reflect that sort of change and the way a mind changes, the way an attitude shifts.’