Against the sun-bleached backdrop of California’s glitzy San Fernando valley, an unlikely meet-cute takes place. He’s a charismatic 15-year-old actor with entrepreneurial ambitions; she’s an aimless, slightly acerbic 25-year-old working as a photographer’s assistant while she tries to figure out what she wants out of life. The almost-romance at the heart of Paul Thomas Anderson’s latest film, Licorice Pizza, has generated plenty of conversation due to the age gap between its protagonists, but look beyond the social media maelstrom, and you’re liable to find one of the year’s most keenly-observed portraits of young love and its myriad highs and lows.

Throughout his filmography Anderson has frequently displayed an affection for the art of the meet cute, from Jim and Claudia in Magnolia to Reynolds and Alma in Phantom Thread, where sparks fly over the breakfast table. For Gary Valentine (Cooper Hoffman) and Alana Kane (Alana Haim) it’s a decidedly less cute meet cute, as he openly flirts with her before having his school photograph taken, and she rebuffs him with an incredulity which lingers throughout the film. It’s a rightful sort of skepticism; he’s a cocky teenager and she’s a somewhat introverted young woman fretting about her lack of direction. In a city of stars, Alana is still waiting for her chance to shine, but from the second he sees her, Gary is smitten. If anything, her open contempt for him only makes Alana more intriguing.

Despite her initial protests, Alana meets Gary for dinner at iconic San Fernando restaurant The Tail O’ the Cock (which closed down in 1985). From here they develop a close friendship, with Gary encouraging Alana to pursue her dreams of acting while embarking on a variety of money-making ventures including selling water beds and setting up a pinball palace for local teenagers. Heavily influenced by the likes of George Lucas’ American Graffiti and Peter Bogdanovich’s The Last Picture Show, Licorice Pizza anchors its series of loose vignettes about Gary and Alana’s lives with the tide of their relationship. They bicker, they make each other jealous (accidentally or on purpose) but eventually they always find a way back to each other, and their closeness changes them both for the better.

Although Paul Thomas Anderson has a reputation for doom and gloom (perhaps at the hand of his most famous flick, There Will Be Blood) all of his films are romances in some way, shape or form. There’s Dirk Diggler’s seduction in Boogie Nights, Doc Sportello’s relationship with Shasta in Inherent Vice and – perhaps most obviously – Barry Egan and Lena Leonard’s tender courtship in Punch-Drunk Love. A continued interest in lonely souls connecting, and strange sorts finding someone equally as odd as them, have created a filmography filled with memorable characters and iconic performances, of which Hoffman and Haim fit into effortlessly. Licorice Pizza marks the first time that Anderson has focussed solely on younger characters, and at its heart, the film is a coming-of-age story about the continual search for one’s place in the world, which any adult will tell you doesn’t end when high school does. If anything, that’s when the hard work begins.

"a continued interest in lonely souls connecting, and strange sorts finding someone equally as odd as them"

Gary’s self-assured nature and charismatic persona put him at odds with the insecure Alana, who seems equal parts baffled and awed by his business acumen. He takes her to New York as his chaperone for a television appearance, and Alana excitedly tells the audience members near her that she knows him. Yet Gary is visibly irritated when they return to Los Angeles and Alana briefly dates his older co-star Lance; when the tables are turned later and Gary begins dating a classmate, it’s Alana’s turn to be jealous. The pettiness of the pair is masterfully indicated not through words but actions – Alana kissing a stranger outside Gary’s mattress store, or sticking out her tongue at him while she dines with famous actor Jack Holden.

Indeed the seductive presence of Hollywood always looms large within Licorice Pizza, which is steeped in Tinseltown lore. In one of the film’s most memorable scenes, Gary, Alana and their friends deliver a waterbed to Jon Peters, famed movie producer and boyfriend of Barbra Streisand. Played by a scene-stealing Bradley Cooper dressed all in white with a slightly unhinged aura, it’s a wry glance at the romanticisation of a city with a seedy underbelly, and the possibility of the reality that lurks behind every fawning headline and mythologised star. 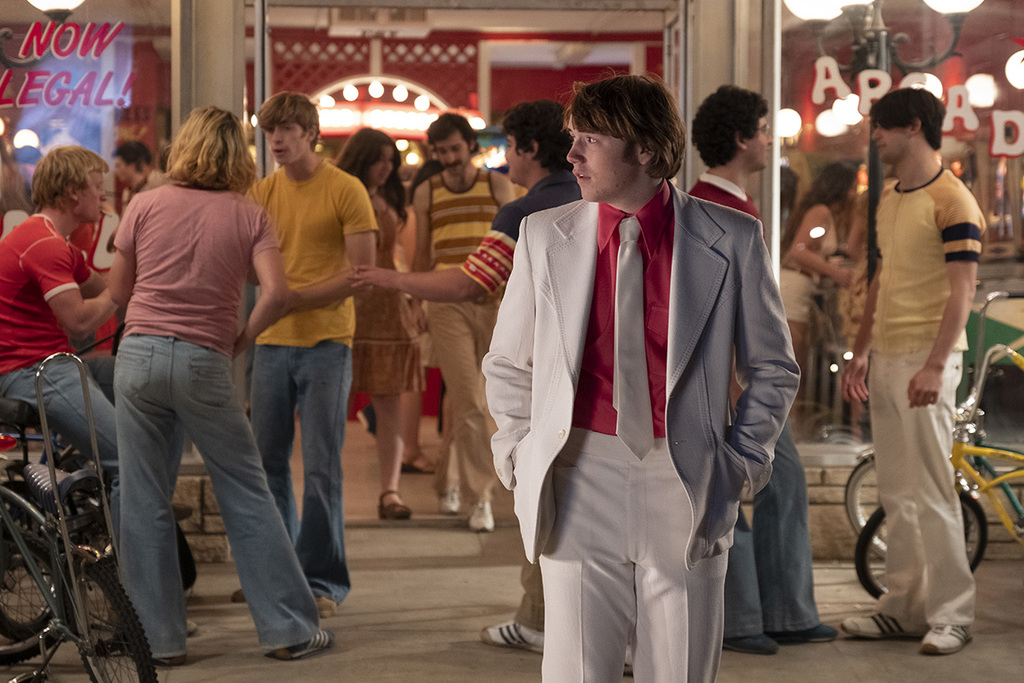 This romantic but by no means glowing endorsement of the Californian movie industry seems to reflect Alana and Gary’s relationship, which is ill-advised and unsuitable, but has moments of total effervescence. Hollywood is a city full of people that get paid to play pretend, but Alana and Gary can’t lie to themselves, or each other. It might not be a romance for the ages, but it’s a romance for their age, capturing the joy, frustration, sadness and excitement of first love in a way that neither condescends nor moralises. As Taj Mahal sings on the film’s jukebox soundtrack – “Baby get your good times now / Tomorrow may not be your day”.