Nope and the Spectre of the Spectacular

Jordan Peele’s third feature film Nope begins within a cheeky quote from the Bible: I will cast abominable filth upon you, make you vile, and make you a spectacle (Nahum 3:6). Made us a spectacle Peele has, and right from the off, it’s all about spectating, being seen: eyeballs. More specifically, the eyeball of animal wrangler Otis Sr (Keith David), pierced by a high velocity nickel whipped up by some unseen, unearthly force. Spooked, the horse that Otis has just been sitting astride bolts into the distance and doesn’t seem to plan on stopping. Neither does Peele.

"Peele turns the mood on a nickel"

The filmmaker – who cut his teeth on comedy with Key & Peele and has since become famous for horror – can turn the mood on a nickel (too soon?) While we’ve got ourselves the mystery of some malignant presence, OJ and Emerald Haywood (Daniel Kaluuya and Keke Palmer) have just inherited a ranch in the Santa Clarita valley that supplies horses for Hollywood productions, and they’ve got financial battles to face. High-energy Emerald is the get-rich-quick type, a foil for OJ’s grounded pragmatism, but at least the siblings can agree on something. After they make the chilling discovery that a UFO is haunting their ranch, they decide to go after ‘the money shot’, as Emerald puts it. ‘Undeniable proof of aliens on camera. The Oprah shot.’ It’s hilarious. It’s delicious.

As such, I’m a bit baffled to see the film has received mixed reviews. The naysayers seem to be neighing that ‘Peele’s script is crammed with about 210% more material than he can meaningfully cohere’. Too many original ideas, then? Meanwhile, for the BBC, ‘The problem isn't that it's messy. Plenty of great films are sprawling messes. It's that not one of those individual strands is quite horrifying or entertaining or suspenseful enough.’ But enough for whom? 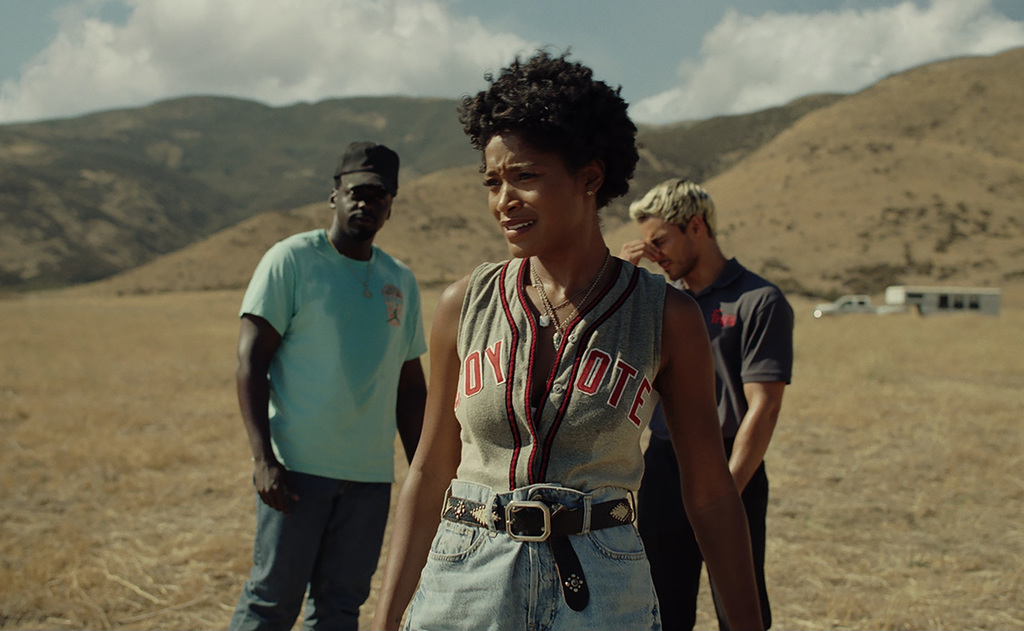 Could this be a case of black directors being subject to more intense scrutiny than their white counterparts? I’m not convinced we’d bother involving the word ‘messy’ for a review of the new Quentin Tarantino film; after all, the man’s made a career on it!

Far be it from me to decide what’s simply a matter of taste and what’s bias – Peele’s film asks these questions itself. Nope transmutes its horse imagery into a riff on Eadweard Muybridge’s The Horse in Motion, an important milestone in the development of cinema captured in 1877. We know Muybridge’s name, we know the name of the horse, Emerald explains, but we don’t know the name of the black jockey on camera. Peele highlights how black filmmakers have been sidelined throughout cinematic history.

In 2018, Peele became the first black person to win an Oscar for an original screenplay: the filmmaker’s first film Get Out was a horror-satire featuring acute interrogation of race relations in America. Us more than beat the sophomore jinx with another zeitgeisty take on fear of invaders in 'The Trump Wall' era. There’s the added pressure for marginalised filmmakers to make works that have a capital M Message about the experience of being marginalised; meanwhile, if you’re a white man, you can make films about, well, whatever you like. What’s so refreshing about Nope is that it shrugs off such expectations with style.

While ‘it's impossible to make any movie without it being about race, because race is all around us’ according to the director, Nope swerves straightforward commentary on the subject. What’s more, the film proves one doesn’t particularly need to ‘cohere’ to make meaning. In fact, some metaphors are much stronger when they dissolve, shift and break down - especially when you’re dealing with the uncanny. Having promised to make us a spectacle – an addictive, mindless summer blockbuster – Peele refuses to give us one.

Rather than a neat, escapist world that proceeds on the logic of tropes we all recognise, he inserts satirical swipes at Hollywood that remind us that – just like the UFO – we, too, are watching. By creating metaphors that morph and change and refuse total coherence, Peele questions our desire for spectacles, for worlds that help us to tie our own into a neat little bow.

Sure, it’s the high budget, popcorn-spilling set-pieces that keep the film hurtling forward, but it’s the hazy succession of startling images that’ll alter your dreams for days afterwards. Horse, cloud, coin. Camera, chimpanzee, wacky waving inflatable arm flailing tube men. That’s the mark of a good film for me – one that not only feels good when you're watching it, but one that messes with the way you see things afterwards.