“Isn’t Wrong Worth the Same As Right?”

You might not know the story of Ubu Roi, but you probably know Macbeth. Even if that doesn’t ring any bells, you’ll recognise yourself – or someone you know – in the arc of its story, which Ubu’s is based on. Think hubris, betrayal, tragedy and Just Deserts. Although Macbeth was penned 500 years ago, and Ubu Roi more than 100, their lessons have lost no punch to the intervening centuries.

‘The scene… is set in Poland, which is to say, Nowhere.’ 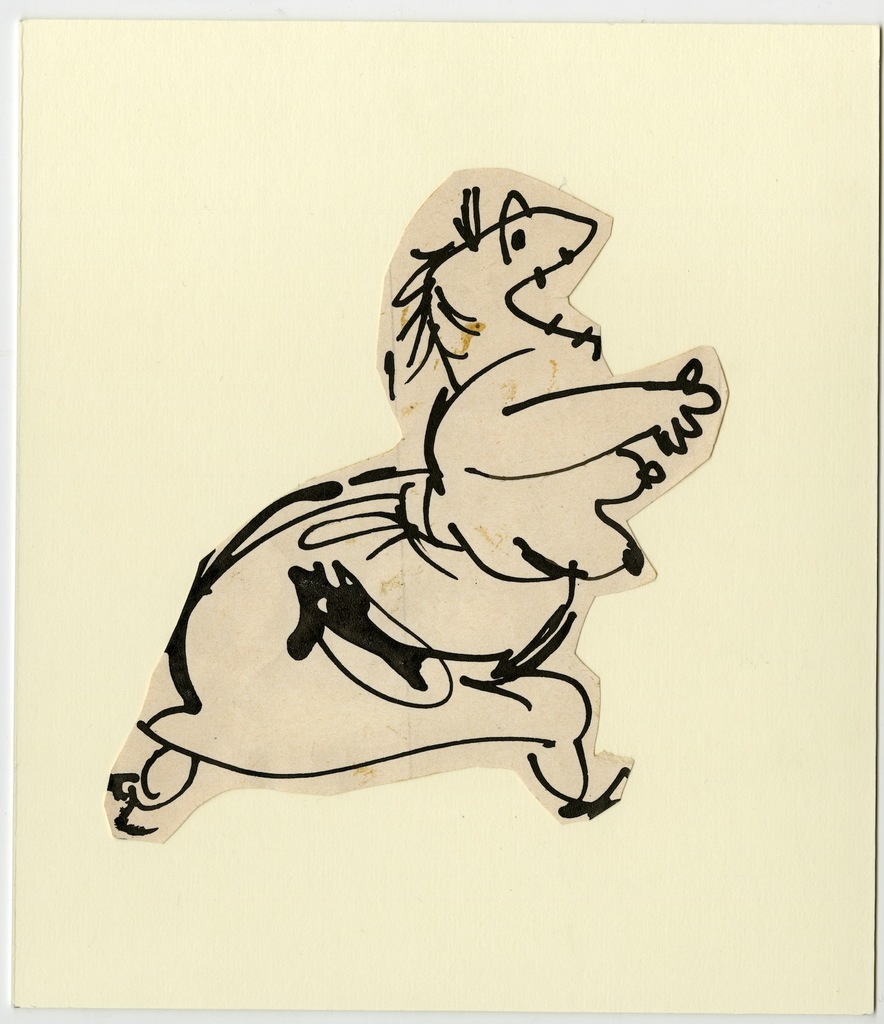 Just like Macbeth, UBU ROI centres on two protagonists: Mere and Pere Ubu. Mere Ubu is keen to have her husband on the throne (“IF YOU WERE KING YOU COULD INCREASE YOUR FORTUNE AND EAT SAUSAGES AND SAUSAGES AND SAUSAGES”), and so the pair plot to overthrow the Polish King (as the play’s author, Arthur Jarry, wrote, ‘The scene… is set in Poland, which is to say, Nowhere.’) They succeed and, at first, it’s looking rosy – they’re promised support, they get the peasants on side, yada yada. The first king’s son vows revenge, but they don’t take him too seriously. After all, the money’s rolling in from taxes (doubled by Ubu, to ensure double the return – crafty!) and hell, there’s a whole kingdom at their command. Eventually, after some back stabbing and a couple of revolts, the pair get what was coming to them – how far the mighty fall. Pere Ubu’s supporters desert him in a Lithuanian cave and he flees the battle he orchestrated, extolling the virtues of the Poland he destroyed “If there was no Poland, there would be no Poles!”, after all. So far, so familiar – but stay with me. 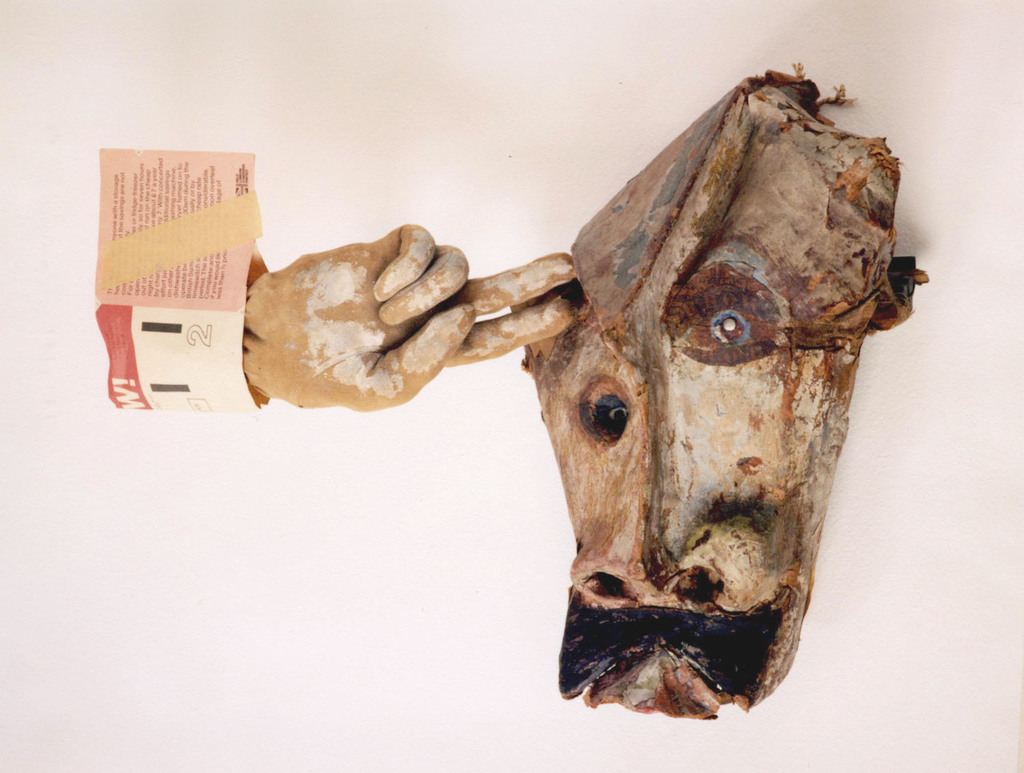 Jarry’s Ubu Roi was banned immediately after its first performance in 1896. No surprise, probably – the characters are grotesque in body and mind, cursing (the play’s opening line is ‘Merdre!’ – French for ‘shit’ with an extra ‘r’) and violent, too (‘Why don’t I bash your brains in, Mere Ubu!’). Actors were dressed as approximations of marionette puppets and interacted with props cut from cardboard. As such, Ubu Roi was arguably the first play in history to draw attention to the artificiality of theatre, and is acknowledged as heralding the arrival of modernism itself. A century later, the piece became something of an obsession for Franciszka Themerson, a Polish artist born in 1907 who, over the course of the 50s, 60s and 70s, produced four separate interpretations of Jarry’s original work. First, she illustrated the play’s initial translation into English. Then, she made masks for the first English stage performance of Ubu Roi before designing a production of the piece in Stockholm, 1964, and ultimately improvised her own comic strip version of the story between 1969 and 70. Extracts from this lifetime’s work are collected and on display at Richard Saltoun gallery in ‘Franciszka Themerson UBU’, until September 15th. 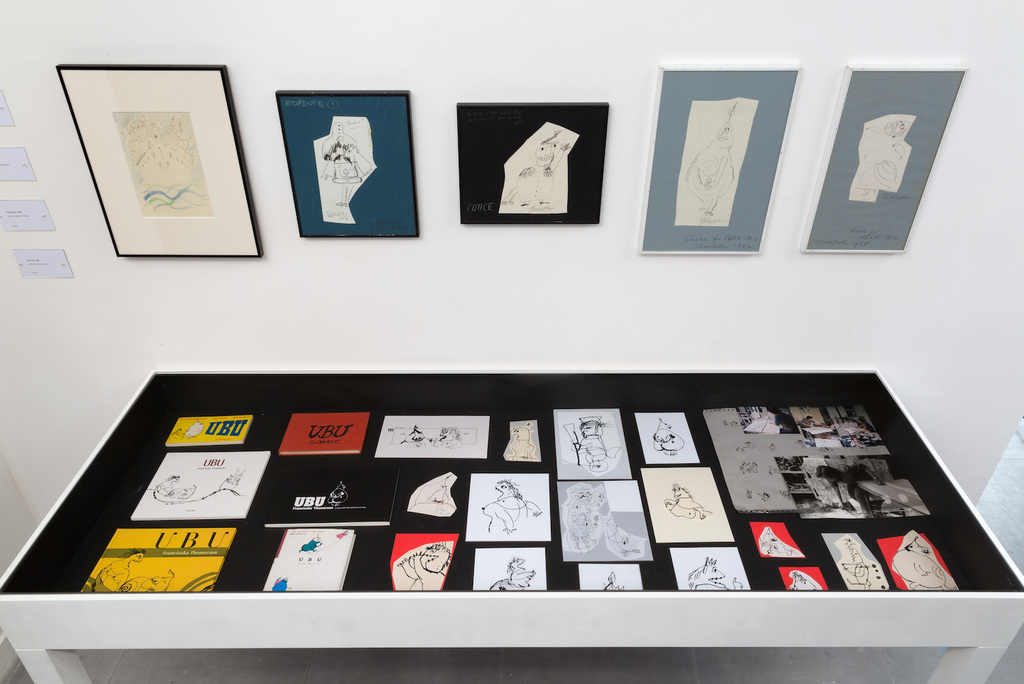 Despite the preamble, Themerson’s work stands robustly on its own feet without the need for such exposition. Her ink drawings, sketches for characters from Ubu Roi, are particularly lively – they’re drawn with a real sensitivity to the essence of entities I’ve never met, such that I can recognise, say, Mere Ubu from one sketch to the next before I know who she is. They feel dynamic, full of the life with which only talent can imbue a drawing; there is no labour here, but a passion for the characters and their story pulses through the sketches. The works on paper have something of the essence of photography, in that they let me feel like I’m looking at something as it is rather than how it was constructed to be. Such is the power of Jarry’s creation, and Themerson’s drawings, that the characters in both have taken on lives of their own. Their world has its own logic, as they flit between cabinets and frames – their effect is more like that of documentary than drawing, somehow. 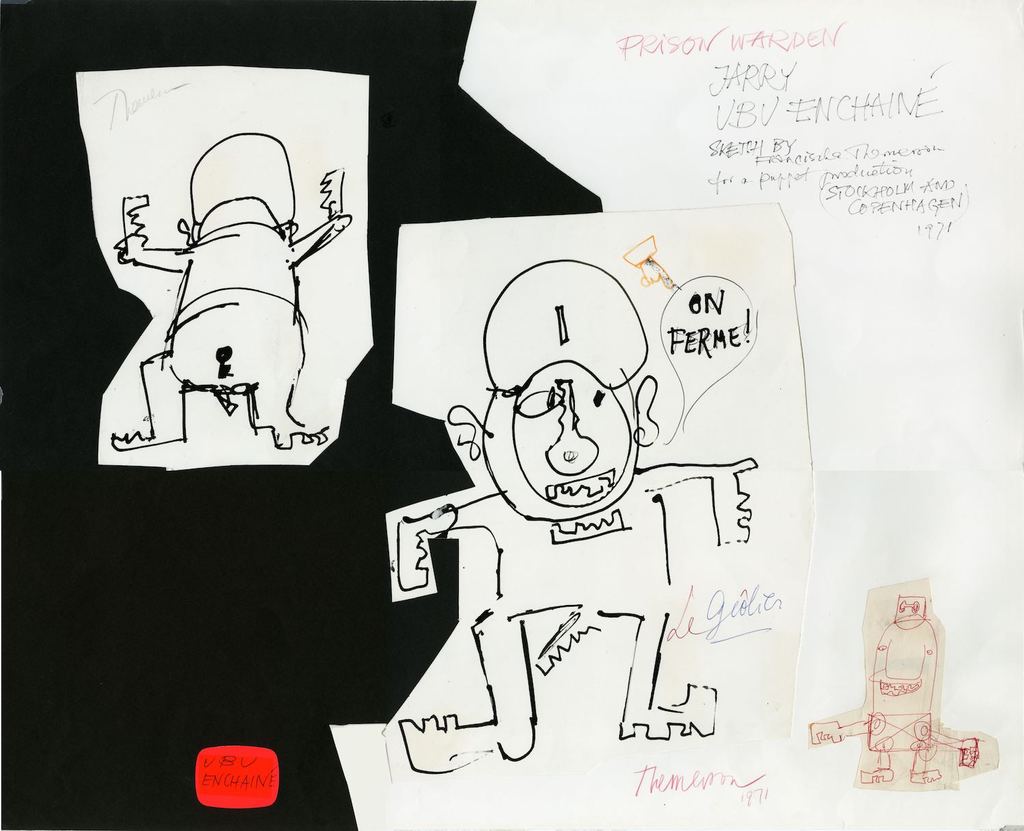 In the second room of the gallery, we move from two dimensions to three and encounter a series of masks. Reminiscent simultaneously of Commedia dell’arte and ceremonial African masks, these pieces feel more like artefacts than artworks. Of course, they are artefacts, of a sort – although they were created as costumes for Themerson’s stage production, their real power here is in compounding the fiction of Ubu’s world. If we can see evidence of that universe, hold it in our hands or over our own faces, then the lines between his reality and ours don’t seem so distinct. The masks are certainly eerier than the ink drawings, and perhaps that’s because of Ubu’s movement ‘off the page’. Displayed in deep frames behind glass, they conjure up the latent threat of dangerous animals in enclosures. There’s the sense that they might animate at a moment’s notice, ushering the strange reality from whence they came closer to our own. Finally, the masks embody the philosophy (or deliberate lack thereof) in Jarry’s original text – a kind of proto-punk. Fuck your theatre, and don’t pretend you haven’t noticed we’re pretending, too.

Displayed in deep frames behind glass, the masks conjure up the latent threat of dangerous animals in enclosures. 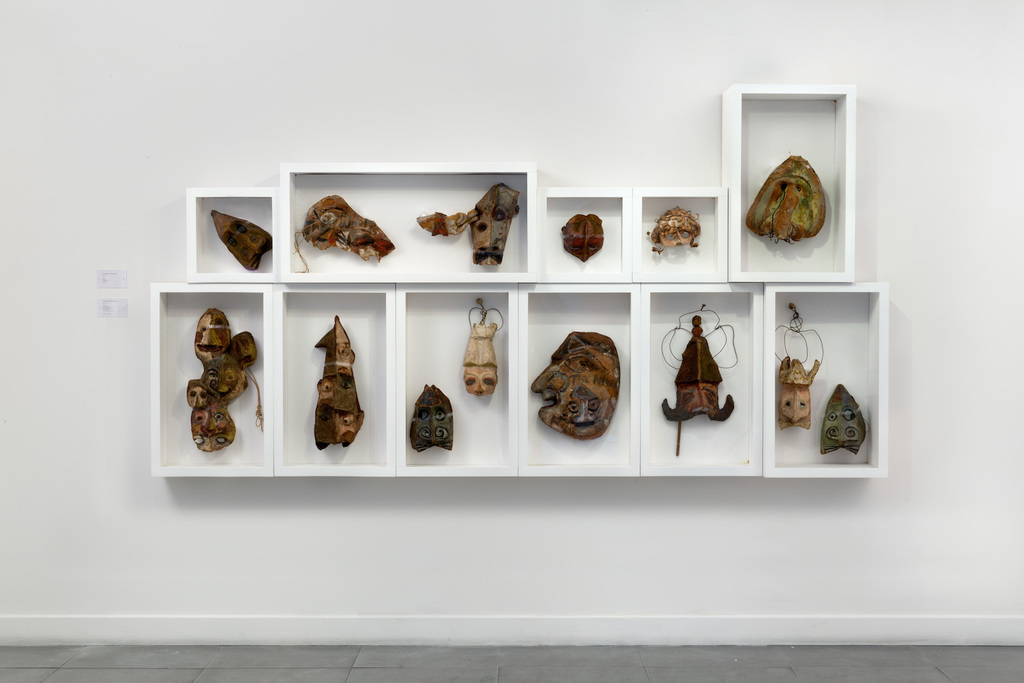 “HORN OF PHYSICS, I’M HALF DEAD! NEVER MIND, I’M GOING TO WAR AND I’LL KILL EVERYBODY.” “HERE YOU ARE, ALL THIS MONEY IS FOR YOU BUT PROMISE YOU’LL PAY ALL THE TAXES!” Extracts from the speech bubbles of Themerson’s comic strip – displayed in the exhibition’s final room – are farcical. It’s funny, charming and horrible at once just like Jarry’s script. But it’s also essentially human, and brutally honest – the dialogue does away with all the nuance which constitutes half a normal conversation, and offers its audience a kernel of truth, the result of boiling down layers of contrived ‘signifier’ into its most basic significance. If it sounds childish, it’s because we’re all children who’ve extended our vocabularies. If it sounds brutal, it’s because that’s a state on whose edge humanity teeters, perpetually. The phrase ‘striking a nerve’ comes to mind – the uproar of the audience on Ubu Roi’s opening night couldn’t have come from a place of disinvestment. Whilst the play is ferocious in its treatment of the ruling elite, the bourgeoisie and the working classes get nicely skewered, too. Everyone is fair game, which is at the heart of both the play’s genius and its potential for offence. A (relatively) modern day fable, Ubu Roi endures and appals because it is a story about me, and you, and the masks we all put on and take off. If Themerson devoted her artistic career to its interpretation, she gave herself to the study of human nature.

“It is not surprising that the public should have been aghast at the sight of its ignoble other self,” wrote Jarry. With Ubu Roi, he held up a mirror – or perhaps an x-ray machine – to a restrained and restraining society, and revealed the horrors bubbling just below its polished veneer. Pere Ubu could be your father, your teacher, your president – or he might be you. Just as the masks are the characters they illustrate, Themerson’s illustrations feel like the ‘thing’ itself, rather than its representation. The irreverent absurdity of the script and the highly-stylised nature of the artist’s drawings are crucial to maintaining our disbelief; otherwise, we might forget that we were looking at fiction at all.