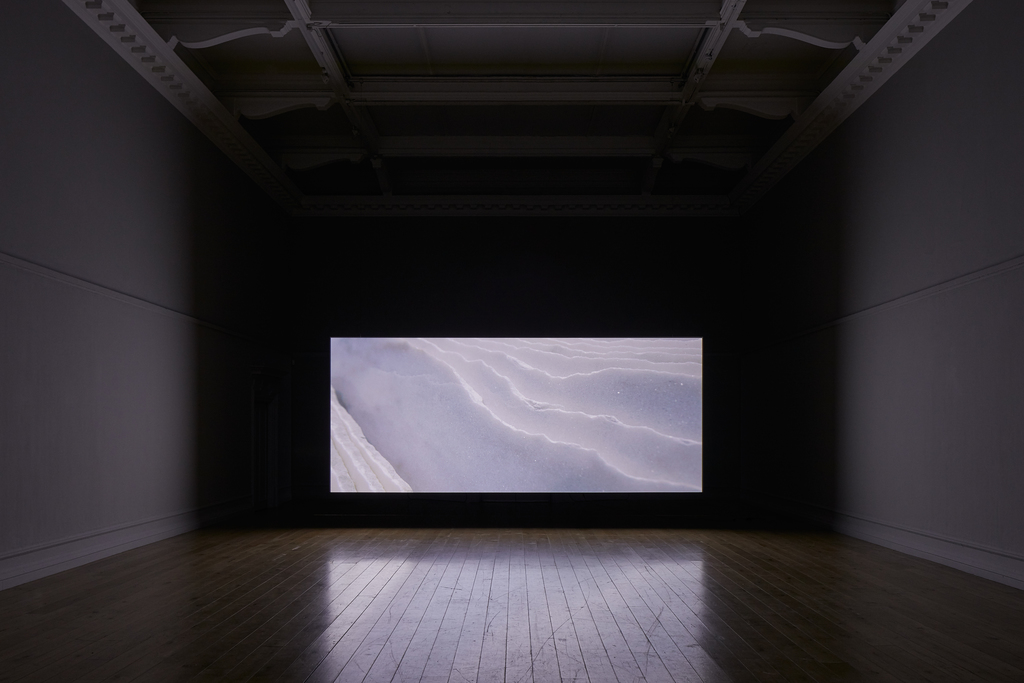 ‘Strata’, Amie Siegel’s first solo show in London, toes an unsettling line between the intimate and the inanimate. The exhibition, at South London Gallery until March 26th, is small but perfectly formed of four pieces – two video, and two sculptural. I’ll begin where the audience does, downstairs with ‘Quarry’, 2015. This film, projected at cinema size so that the landscapes and interiors it features are almost to-scale, takes the viewer on the same journey as the marble they’re watching, from its birth underground to its final resting place as surfaces in luxury Manhattan apartments.

What Siegel is showing us is what we cannot see – the ghosts of structures hollowed out from what is now a sprawling nothingness, its contents sent all over the world to construct the most extravagant buildings everywhere but here.

It opens with panning shots of the quarry which gives the piece its name, green light playing across its cavernous interior and eerily calm water. Everything is perfectly still except for our point of view, which sweeps steadily between fissures and along expanses of wall. The sublime is called forth and rejected alternately throughout the film, both by its cinematography and soundtrack.  Music laced with soaring crescendos and choral arias accompany the camera’s movement, inviting the viewer to travel with it. We’re familiar with the format – think of an epic landscape shot in a Spielberg film, or even the camera’s journey across a crime scene in an episode of CSI – but the space feels alien, like an otherworldly Cathedral. I think of the cost of building a structure from solid marble, and then consider that this one is naturally occurring and larger than anything made by people. The quarry, though, is an absence, not a presence. It has been emptied with human hands, not constructed by them – and yet, the effects are disconcertingly similar. The flat walls and square corners are redolent of architecture, but this is not a space for human beings. The landscape is unpopulated, and the quarry would be a lonely, if exquisite, place to stay. What Siegel is showing us is what we cannot see – the ghosts of structures hollowed out from what is now a sprawling nothingness, its contents sent all over the world to construct the most extravagant buildings everywhere but here. 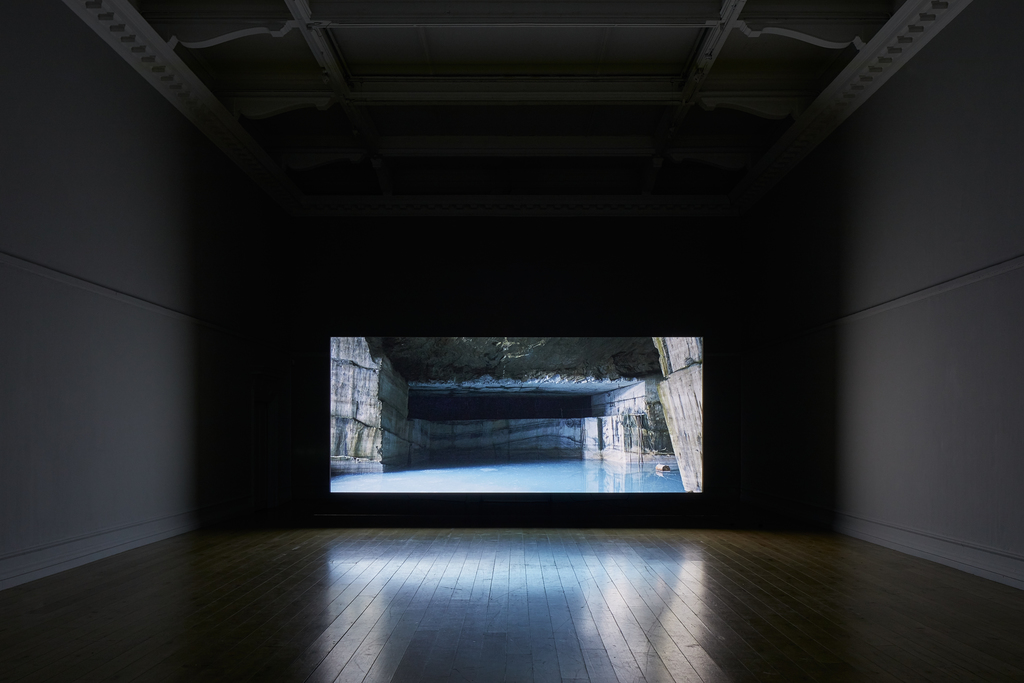 The spell of the space and its heavenly soundtrack is broken as we cut to shots of machines set to work in the quarry. They’re of the same immense scale as the pieces of stone they’re grappling with, and make the corresponding amount of noise. Their rhythmic grinding and polishing feels unstoppable and almost autonomous, its sound filling our projection room and Siegel’s quarry both. Banging, or shouting? Creaking, or groaning? The machines figure more like (macro)microorganisms diligently processing some organic matter, moles moving earth in their burrow, than anything manmade. Perhaps they were exposed by the digging, and not the other way around. Perhaps they have been here as long as the earth they stand beneath.  We cut to another stage of working the stone, in which its surface is washed by sprinklers whose water falls like rain or precipitation from a cave’s ceiling. Both jets and grinders are imbued with the Midas touch of Siegel’s lense, flattening the significance of everything it captures into something beyond and between categories – inert and in motion, autonomous and automated – as it passes over both with the same cool disconnect. 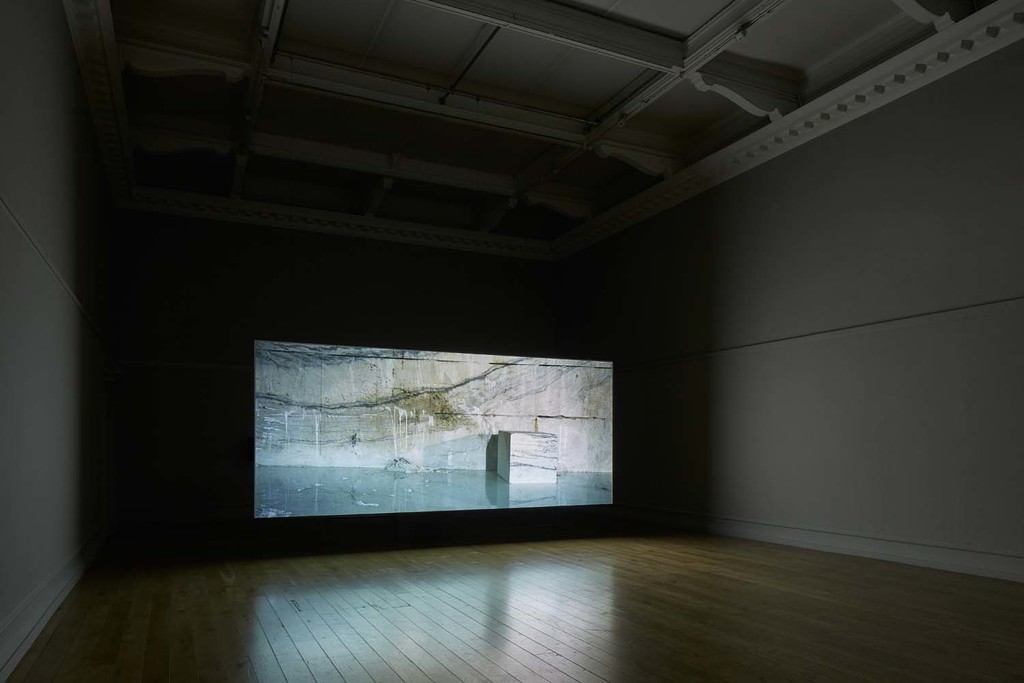 Siegel manages to homogenise the natural and the manmade with a sleight of hand too subtle to unpack; it’s woven into her stance, and the viewpoint she asks us to watch from. There’s no manipulation, only angles and space. From the camera’s great distance, we move to a close-up of a single marble slab. Initially, the surface looks like a snowy landscape, the fissures marking a frozen continent in miniature, with rivers and tributaries and snow and pasture like a view from an aeroplane window. And then we realise what we’re looking at – a piece of stone – and the trick is complete. By zooming in, Siegel has double-stepped us into zooming out. 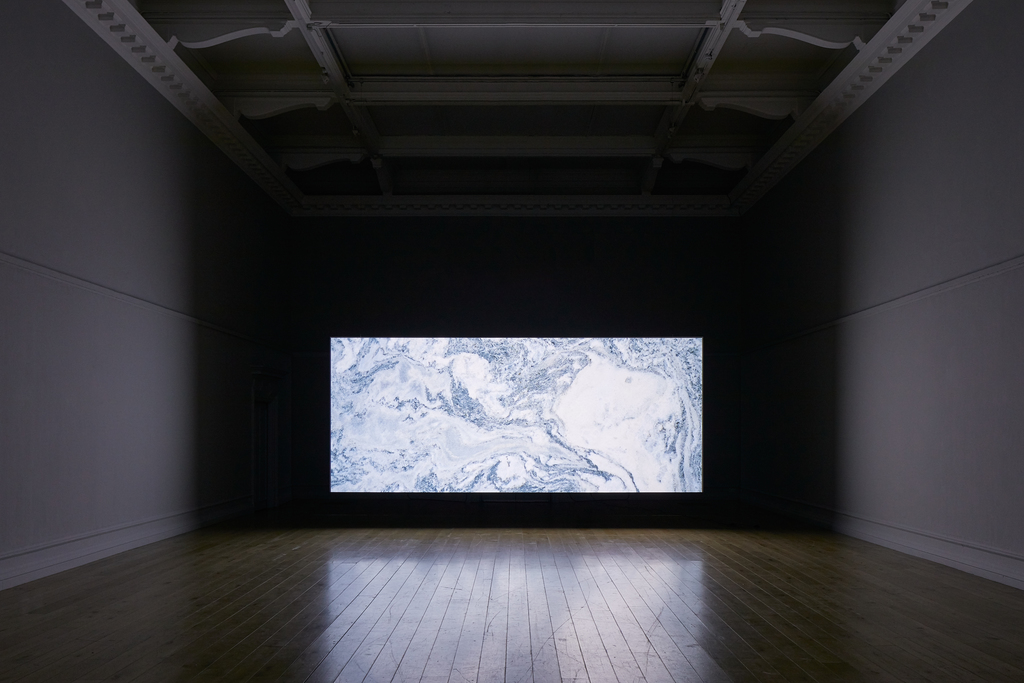 As the choral melodies slide back in, the camera slips from the quarry to a new topography – a block of flats, wherein the marble we saw harvested has found a home. We see the finished material in situ: here, a kitchen surface is topped by a sterile little flower arrangement; there, tiles cover an entire wall. The camera, though, does not change its behaviour in recognition of our new domestic setting. The cinematography recalls the grandeur and mystery of the quarry in shots that trace chopping boards with the same reverence and pace as they did gullies and underground lakes. We’re struck by a nasty truth – all this effort to recreate what was naturally there, far away underground, has produced something sterile. The sublime has made way for the cold and vulgar, and sounds of the city – sirens and traffic – begin to creep into the picture. Although we’re now inhabiting a much more familiar world, Siegel’s scenes remain empty of people: too fickle, imperfect and impermanent to exist in these spaces. The soundtrack reaches a crescendo as we complete our tour of the Apartment for No One, inhabited only by aspiration. 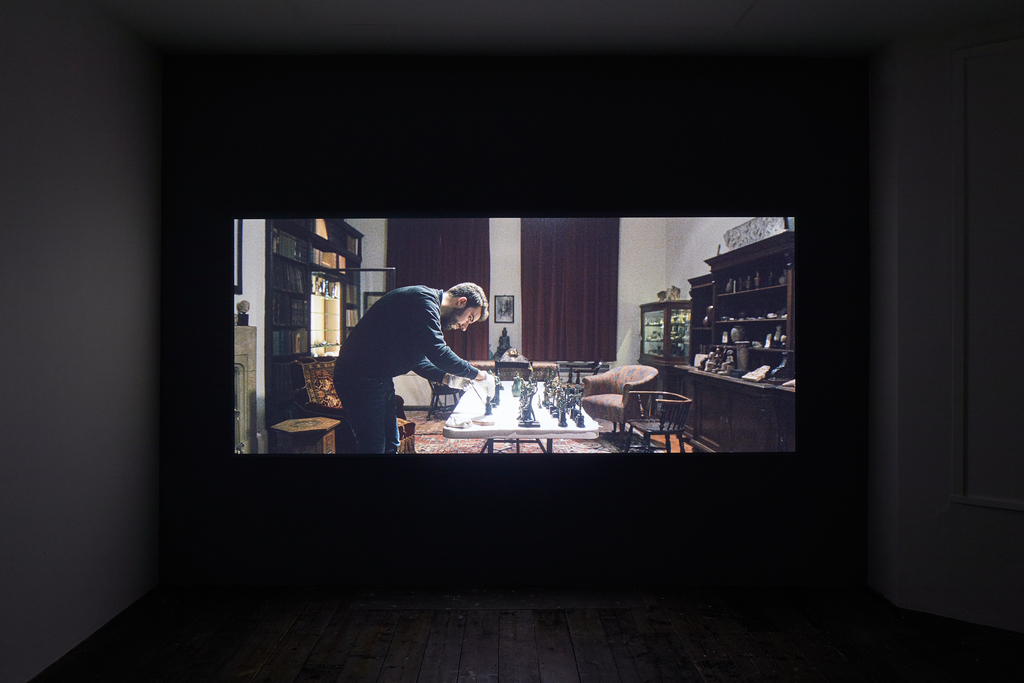 Walking upstairs, I come to ‘Fetish’, 2016. Another film, this one captures the annual and nocturnal cleaning of Sigmund Freud’s collection of trinkets and totems in his office. Just like the apartments in ‘Quarry’, the rooms are shot like landscapes; although this time the space is peopled by its cleaners, the real stars of the show are the figures who are handled one by one to be dusted and polished. Again, all human interest is transferred to the inanimate – it’s a curious vantage point. Egyptian gods queue up to be brushed – a whole pantheon yields to grooming, and the line between the sublime and the mundane, the wry smile and the chill down the spine, is danced along. What we’re looking at, in ‘Fetish’, is a room and its contents getting ready to be seen; the video finishes with a shot of the infamous analyst’s couch, quietly submitting to being stripped and hoovered.

Egyptian gods queue up to be brushed – a whole pantheon yields to grooming, and the line between the sublime and the mundane, the wry smile and the chill down the spine, is danced along. 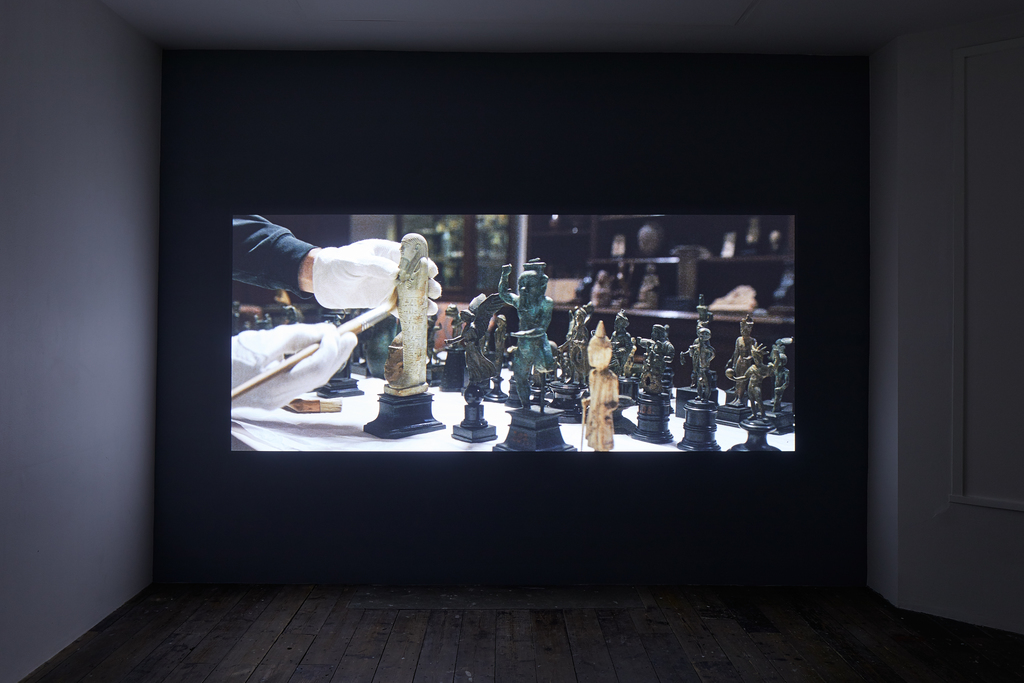 Tying together the thought processes behind ‘Quarry’ and ‘Fetish’, we come to ‘Dynasty’, 2017, and encounter the only physical objects in ‘Strata’: samples of marble selected by Ivana Trump for the lobby of New York City’s Trump Tower. In the kind of glass case we’re used to seeing artefacts or relics displayed, Siegel has placed a fragment of pink marble from one of the floor tiles. The corner was purchased by the artist on e-Bay, having been put up for sale after the 2016 election. It sits with all the oppressive deadness of a shrunken head or a saint’s fibula; just as with a relic or anthropological curiosity, provenance is everything and context is key. Across the room on its far wall are displayed framed scans of two ‘book-matched’ marble slabs, in the same malignant shade of pink as the fragment. They remind me of many things – biopsies or X-rays of a pair of lungs, perhaps tissue samples from an autopsy – and somehow refuse to stay in their material ‘category’; like the fragment, they evoke something which had been alive, but is no longer.

By setting the foundations for infinity, humans take comfort in the knowledge that they have literally moved the earth and left a mark. 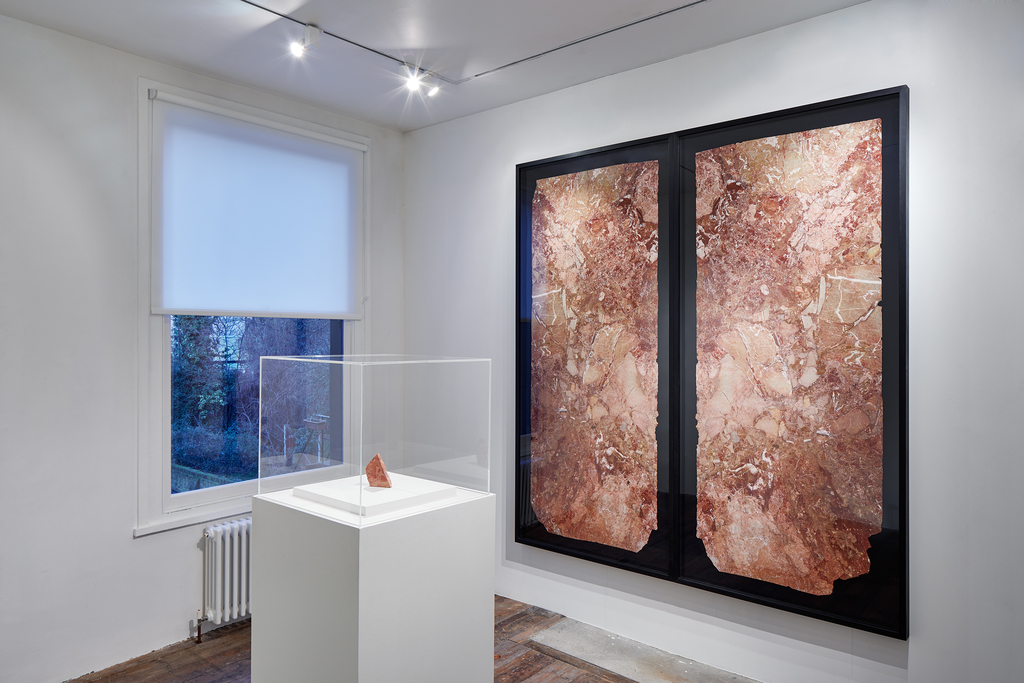 By insinuating an extinguished life force within the marble, Siegel projects both promise and disappointment, beginning, end, and a cyclical infinity onto the material. It makes the substance not just inanimate, but dead. Here it is, hung on the wall like a head of game. An indicator of success is perhaps always driven by the undercurrent: I have succeeded and survived while others have not. ‘Dynasty’ examines the social element of marble, demonstrative of power and resources. It is laid down with the silent assertion that one’s descendants will walk on this same perfect surface for generations to come, stretching into the unimaginable future. By setting the foundations for infinity, humans take comfort in the knowledge that they have literally moved the earth and left a mark. 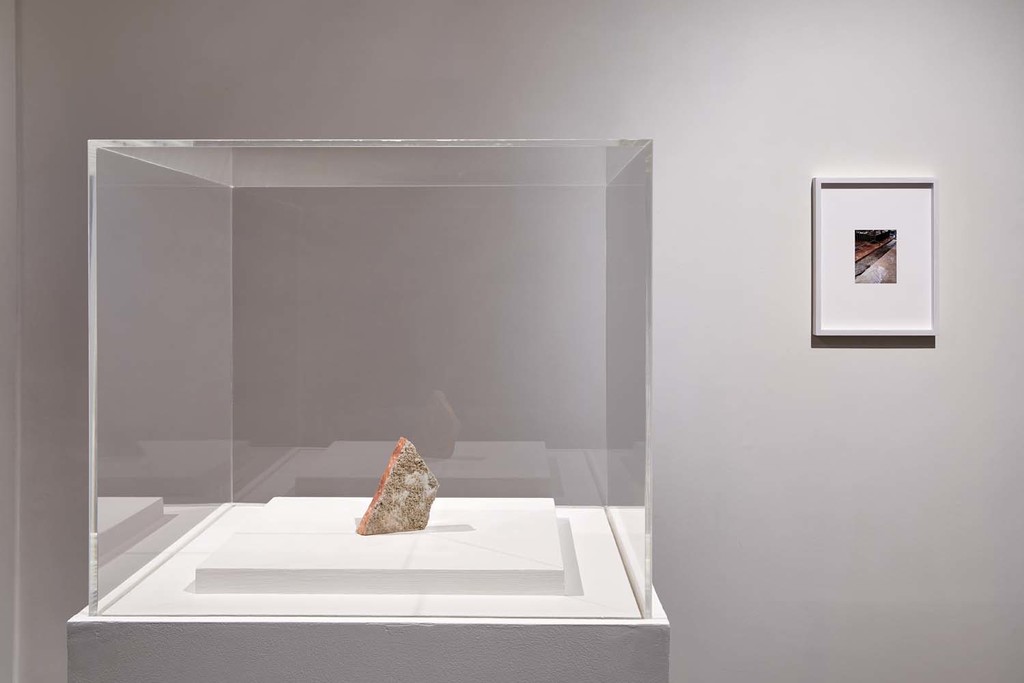