In the Lap of the Gods

Review of Titian: Love, Desire, Death at the National Gallery

Seriously, what is up with Jupiter? The king of the gods always seems to be shape-shifting, as part of an elaborate ruse to rape the latest woman in his sights. Indeed, he assumes three different guises, and victimises three different women in this exhibition alone. Along with insidious gods, and as its title suggests, Titian: Love, Desire, Death explores the depths of the human experience, brings together seven ‘poesies’ interpreted from Ovid’s Metamorphoses. 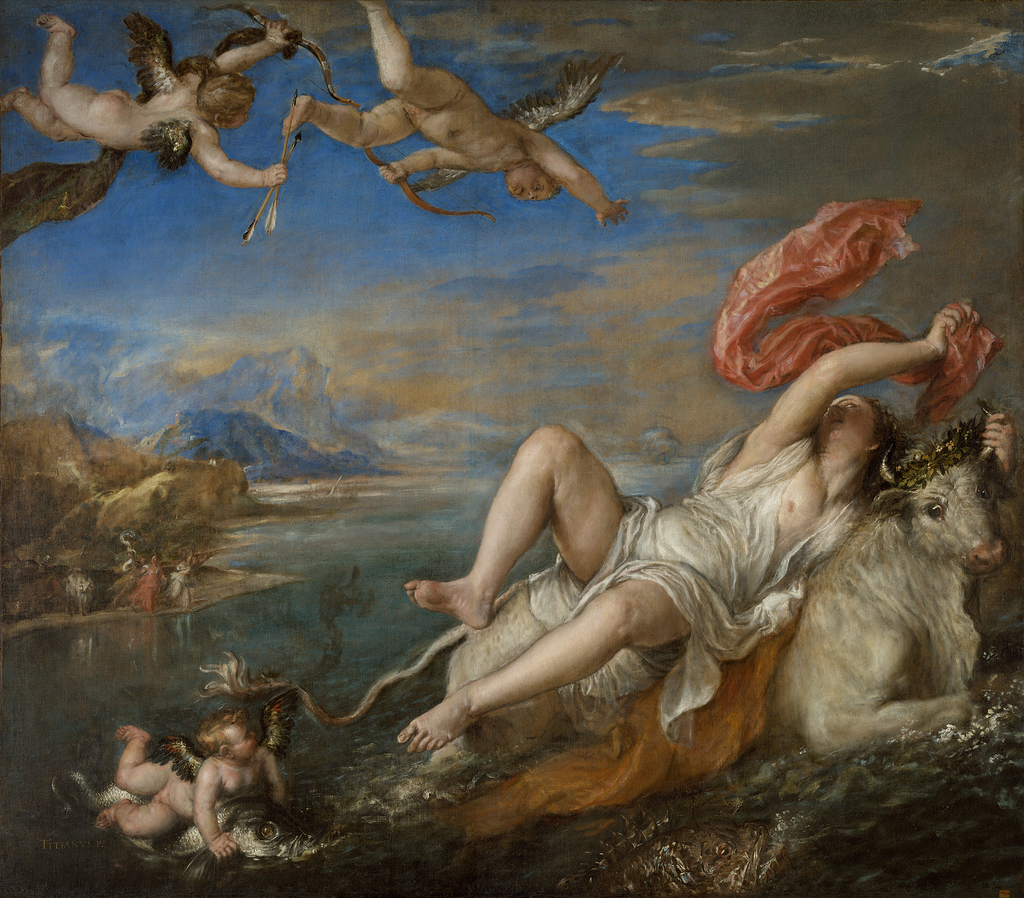 In Titian’s re-telling, all is motion. Terrified Europa flails awkwardly on the bull’s back, clutching one of its horns to save herself from drowning

In ’The Rape of Europa’, sexual violence is at its most visceral — and complicated. In Ovid’s telling, Jupiter disguises himself as a snow-white bull, carries the Phoenician princess across the sea to Crete, where he then violates her. In Titian’s re-telling, all is motion. Terrified Europa flails awkwardly on the bull’s back, clutching one of its horns to save herself from drowning — or being eaten by the ugly looking fish nipping at her mottled heels. In her other hand, she clutches a long piece of red fabric, which writhes in the wind, conjuring precarity and distress.

Tailing her are a trio of cupids. One is whimsically riding a dolphin. Two more arc ballistically through the air; the one in front reaches for Europa, though not too convincingly. Still, this outstretched arm — however chubby and diminutive — offers the slightest bit of hope, which tugs us into the drama of an otherwise despairing scene. The side of the canvas home to the frolicking cupids revels in the somnambulant colours of a sunset and the hazy mountains in the distance; but on Europa’s side of the canvas, smoky storm clouds encroach. The one part of the painting which is stoic and still, and eerily so, is the bull. He stares back at us, with eyes that ought to read as cute — huge, glinting with light — but instead appear dead and dull. Indifferent. Which is Jupiter’s typical attitude, when it comes to human affairs. It’s almost as if the god is checking the viewer’s possible desire for the semi-nude Europa and saying, No, this is my prize. 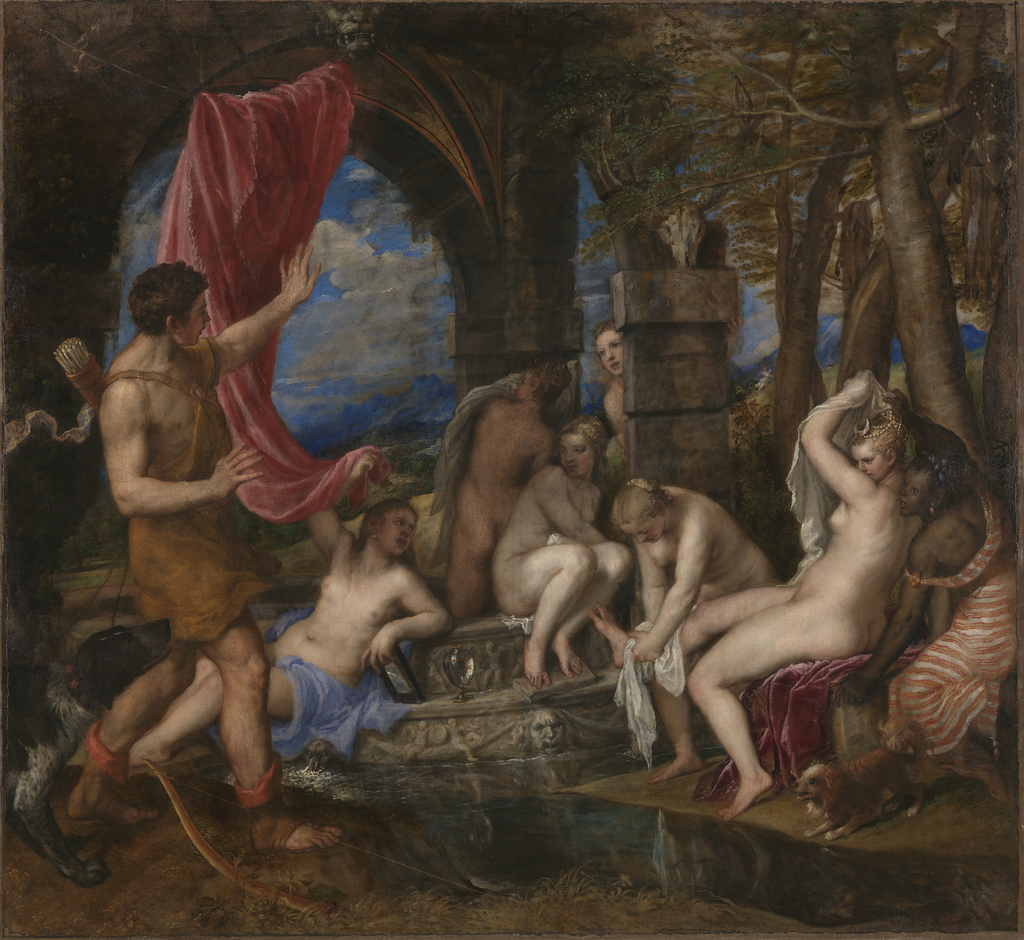 Indeed, looking can be dangerous in classical mythology — as it is in Titian’s treatment. Especially for the hunter Actaeon when he stumbles upon Diana, the goddess of the hunt, and her nymphs bathing in a spring. A canonical scene, popular throughout art history, not least because it affords the opportunity to ogle multiple naked women at once. Titian’s ‘Diana and Actaeon’ at least suffuses the scene with drama — a freeze-frame of the split-second in which Actaeon draws back the makeshift curtain and realises he’s seen something he shouldn’t — as well as complexity.

Still, this outstretched arm — however chubby and diminutive — offers the slightest bit of hope, which tugs us into the drama of an otherwise despairing scene.

Compared with, say, Breughel the Elder’s ‘Diana and Actaeon’ (in which there seems to be acres of luscious green space and endless time to view the nymphs’ languorous poses) Titian’s version is fraught. Trees and stone arches enclose the fleshy bodies crowded close together. At least one of the nymphs hasn’t yet noticed Actaeon, as she continues to wash Diana’s feet. As a matrix of sightlines plays across the tableau, Titian draws attention to the act of seeing and being seen: two naked bodies are exposed, yet others are obscured by strategically placed pillars, fabric and crossed arms. Diana has spotted Actaeon, though, concealing herself with a cloth as best she can, her face flushed with anger. The skull of a stag sits on a column, while a lap dog by the goddess’ side yaps pathetically at Actaeon; both of which foreshadow his death. 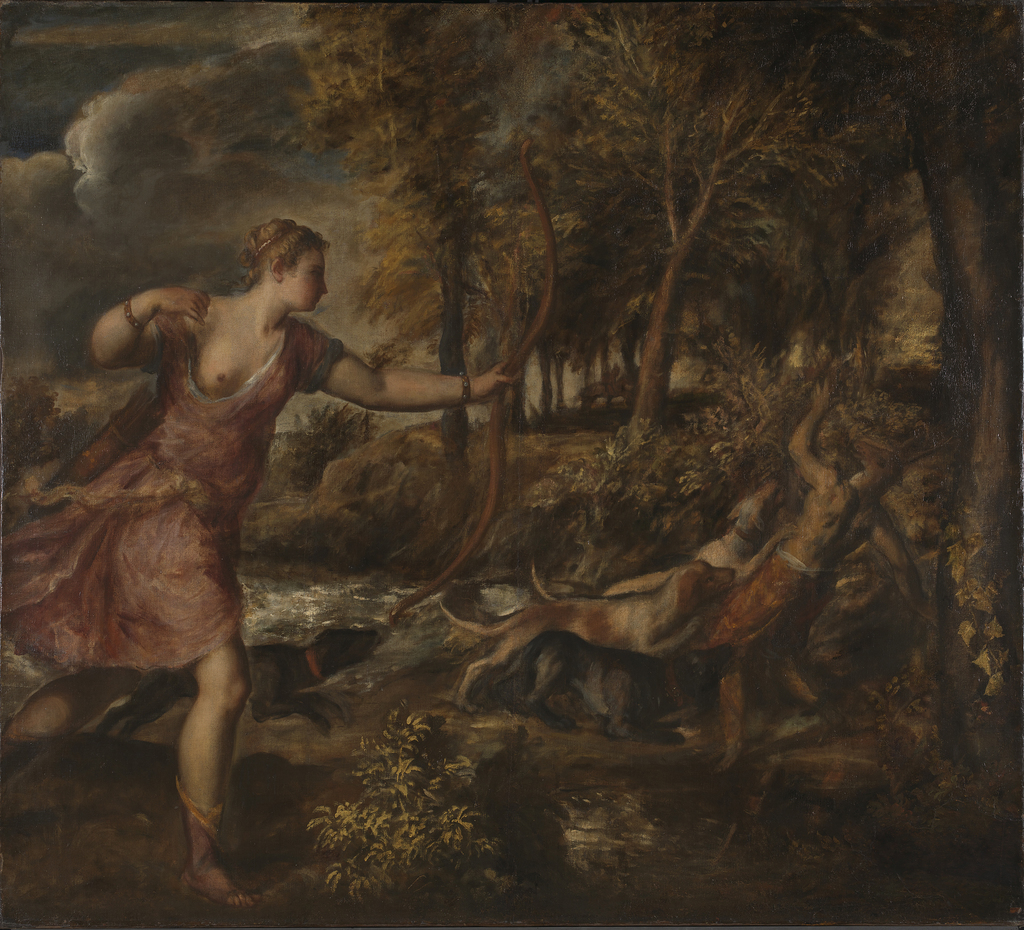 ‘The Death of Actaeon’ hangs nearby. As punishment, Diana turns the peeping tom into a stag and has him torn apart by his own hunting dogs, the hunter now the hunted. Titian depicts him mid-transformation, with a human body and the head of a stag; robbed of facial expression, his end seems all the more inevitable, morbid, and collateral. Dogs rush him in a blur of motion and leap up his chest. The forest is a dark, nauseating green, while Diana in the foreground radiates light, striding with her bow outstretched and her gaze fixed on Actaeon. 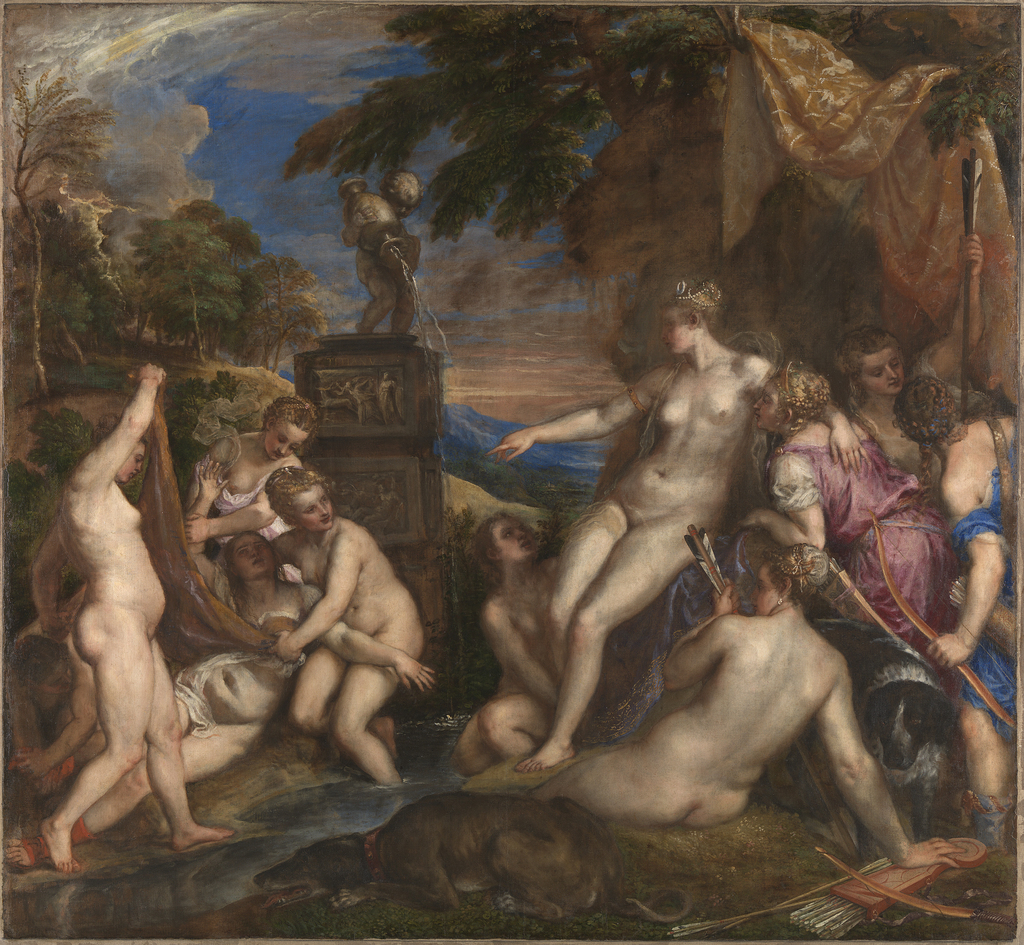 Diana, it seems, is ruthless and unforgiving, and her probing gaze fixes on another victim here in ‘Diana and Callisto’. Though this time it is one of her nymphs, and more damning than her bow is an outstretched, accusatory finger. Appearing in the canvas’ centre, her hand glowing as a candle, the scene revolves around Diana’s accusation, the moment she realises she has been betrayed by one of her nymphs. In contrast, Callisto’s face appears in shadow, such that it takes a moment to realise who Diana is pointing at, and why. Nymphs are holding Callisto down and tearing off her clothes to reveal her (rather sack-like) pregnant stomach. The story goes that Callisto was raped by, you guessed it, Jupiter; and upon learning this, since Diana expects strict chastity, she banishes Callisto with this one dispassionate gesture, despite having loved her. 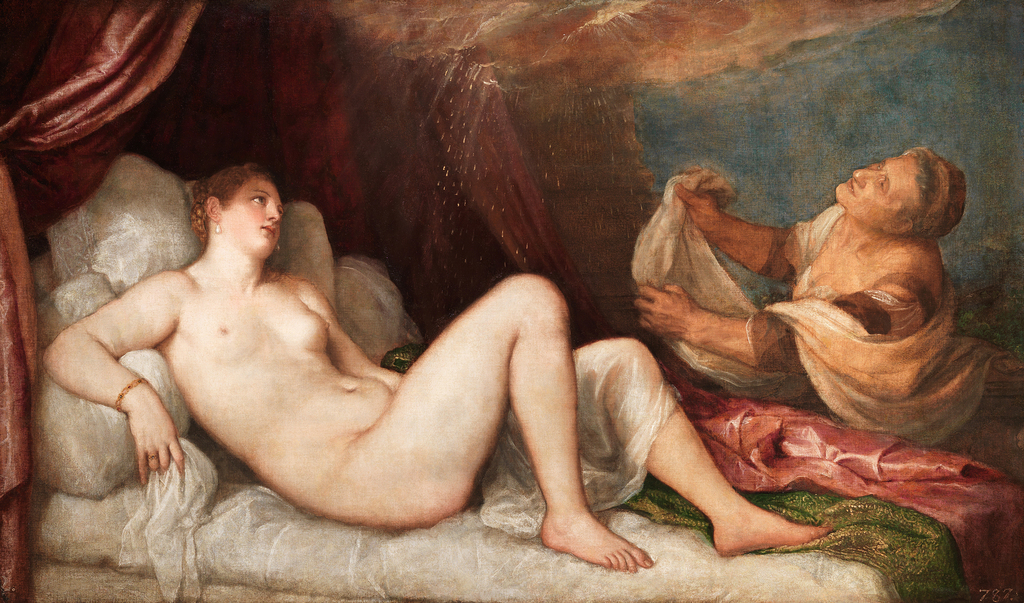 How quickly things can change in an instant.

The tragedy is not simply that Callisto is deceived by Jupiter, or that she is banished, but that she is betrayed by her fellow nymphs, who entrap and expose her — a rape victim ostracised by her peers. All this, though, sinks in slowly upon viewing. The painting appears at first like another jumble of flesh, Diana sumptuously outstretched. Brooding clouds in the distance seem in accord with Diana’s mood, but other elements seem discordant with the scene’s content: an exhausted hunting dog lying in the foreground, a flowing stream, a trickling fountain; all suggest a halcyon freedom. The scene is oddly and inconsistently lit, as if at any moment the sun might equally drop or rise over the mountains, and on bodies aglow like marble or moonlight. How quickly things can change in an instant. 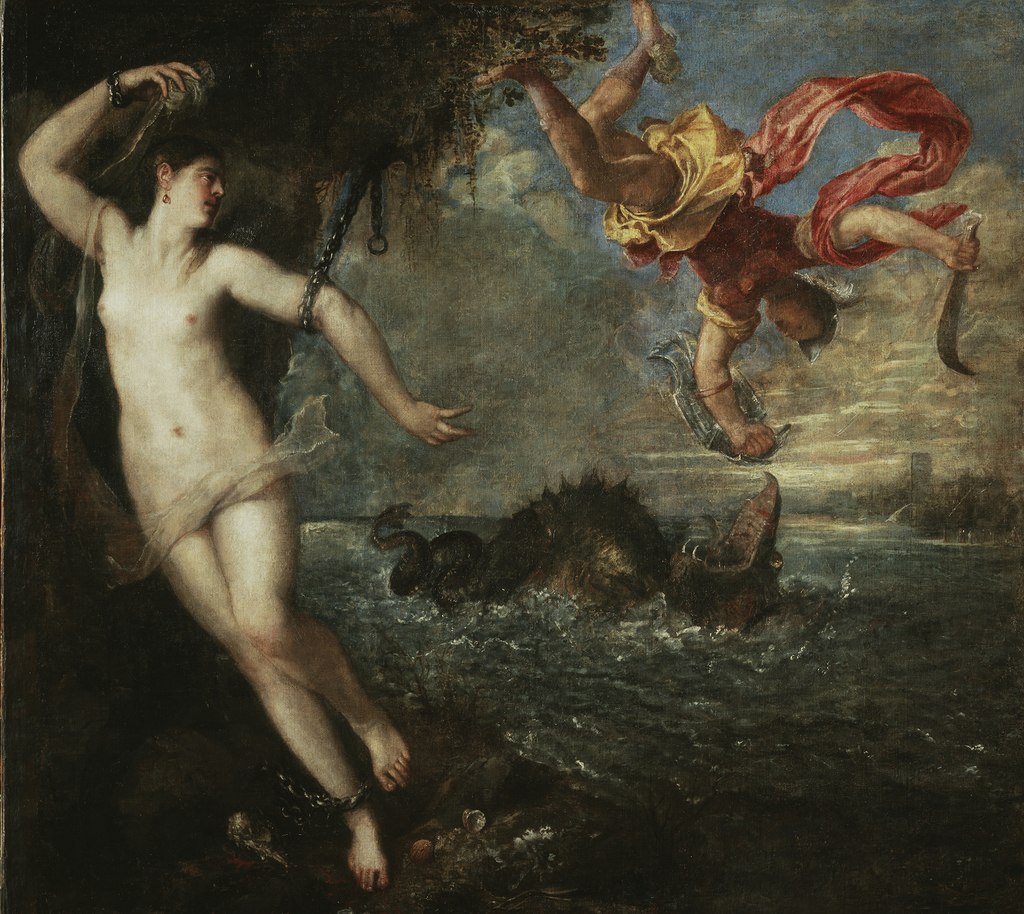 Titian’s word ‘poesies’ is a good word to describe these works which erupt and reel from an unshakeable moment. They rhyme with one another — dogs, sea beasts, fountains, fabric, bodies in flight, all echoed from one painting to the next. Seductive and troubling, glimpsed snapshots and slow-motion feature-films, they unfurl like storm clouds and linger like the sun on one’s cheek. There’s no telling when our worlds will be upturned. Or what vengeful gods might throw our way tomorrow.