‘I will show you fear in a handful of dust.’

Flickering lightbulbs strung on wire flash lightning, blackout, and come alight again, and an unknown soldier is flung from stage left flat on his back clinging to safety rope. This is Akram Khan, dressed all in white, gungroo anklets rattling as he gets to his feet. He begins to reel in the rope. 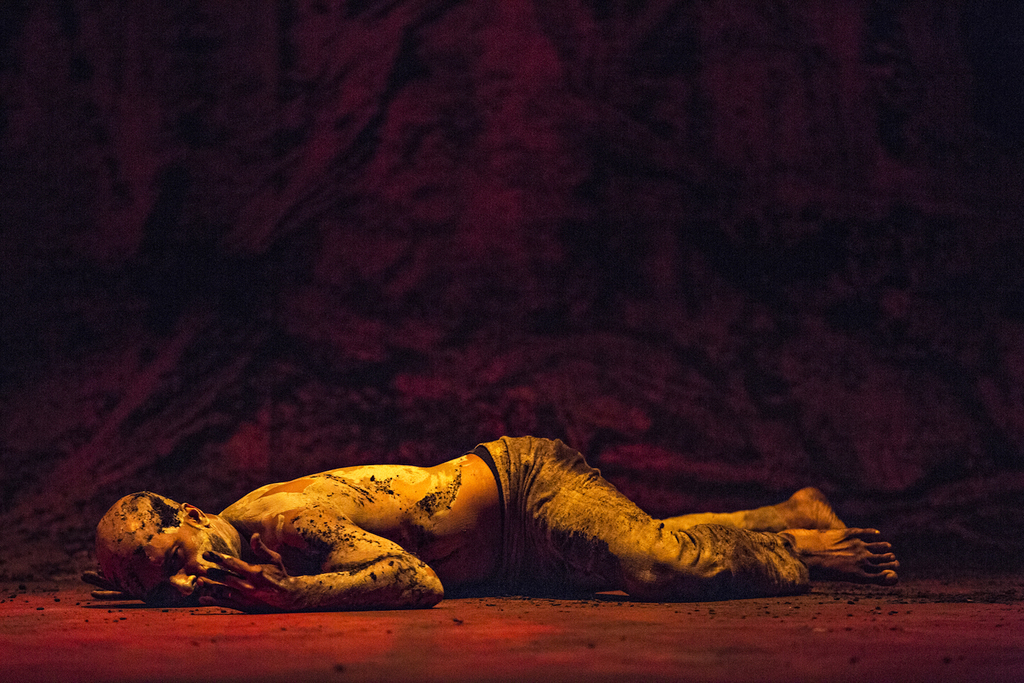 For ‘rope’, read chain, umbilicus, noose, trenches, waves, lifeline. For ‘Khan’ you can read dancer, soldier, ghost of a sepoy, Prometheus, Xenos, or foreigner. The great gift of Khan’s final solo performance is how it allows you encounter such ambiguities, let them settle as sediment in the mind while he gestures, stamps, spins, climbs, falls and builds a story of mythic proportions. This willingness to sit (and dance) with myriad signifiers without allowing the performance to slip into vagueness is what lifts its story – of a soldier, a dancer before the war – out of time entirely; over the course of an hour, we’re whisked away to a fundamental and deep-reaching plane, and into the all too human experience of self-alienation. 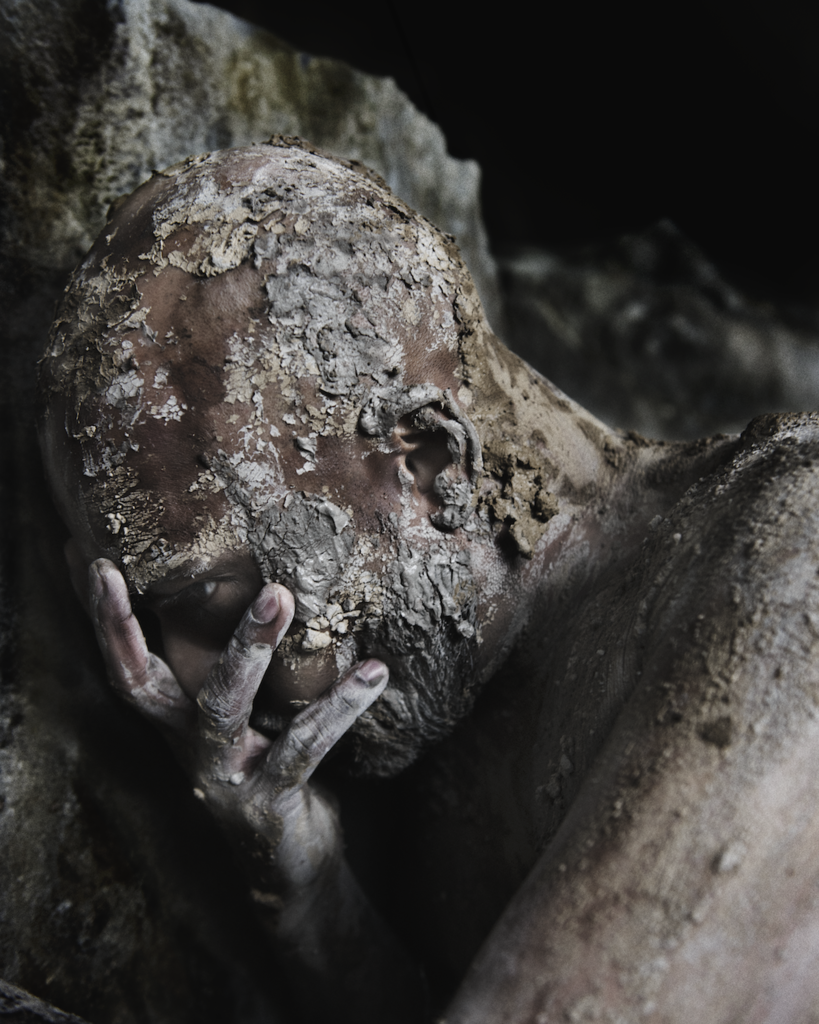 No sooner is Khan back on his feet than he has crashed through a small table, scattering dirt across the floor. This is dirt that he will spend the rest of the performance shaping into a neat pile at the stage’s front and centre. The ultimate meaninglessness of this heaping gesture - made to feel quotidian through its dutiful repetition - calls to mind a line from T.S. Eliot’s The Wasteland: ‘I will show you fear in a handful of dust.’ Xenos shares with Eliot’s infamous modernist poem the question of how to exist in a fragmented and ruined society, the tinnitus of World War I trauma still ringing in collective ears. The task of rebuilding after such a huge rupture, and the frangibility of such a task, situates us in a shellshocked wasteland. How to nurture a strange and barren world, to rebuild after catastrophe?

The show’s title, Xenos, means stranger in Greek. Here we have the estrangement of 1.5 million Indian soldiers who fought for Britain in World War I and whose first-hand testimonies were drawn upon to build the show’s narrative. The piece also uses the myth of Prometheus, who – in trying to connect with and advance mankind by giving us fire – is outcast and alienated by the gods, who chain him to a rock for all time and every day send an eagle to peck out his liver. Rather than produce a simple allegory (trauma and suffering = liver pecking) Xenos pushes the act of interpretation itself to the fore, reading in Prometheus the Titan forgotten by the gods (as the sepoys are often forgotten by historical accounts), the overwhelming weariness in the story (as Franz Kafka before him, ‘The gods grew weary, the eagles grey weary, the wound closed wearily’) with the huge slope that forms the stage as an immovable mass of rock that Khan will dance across indefinitely. 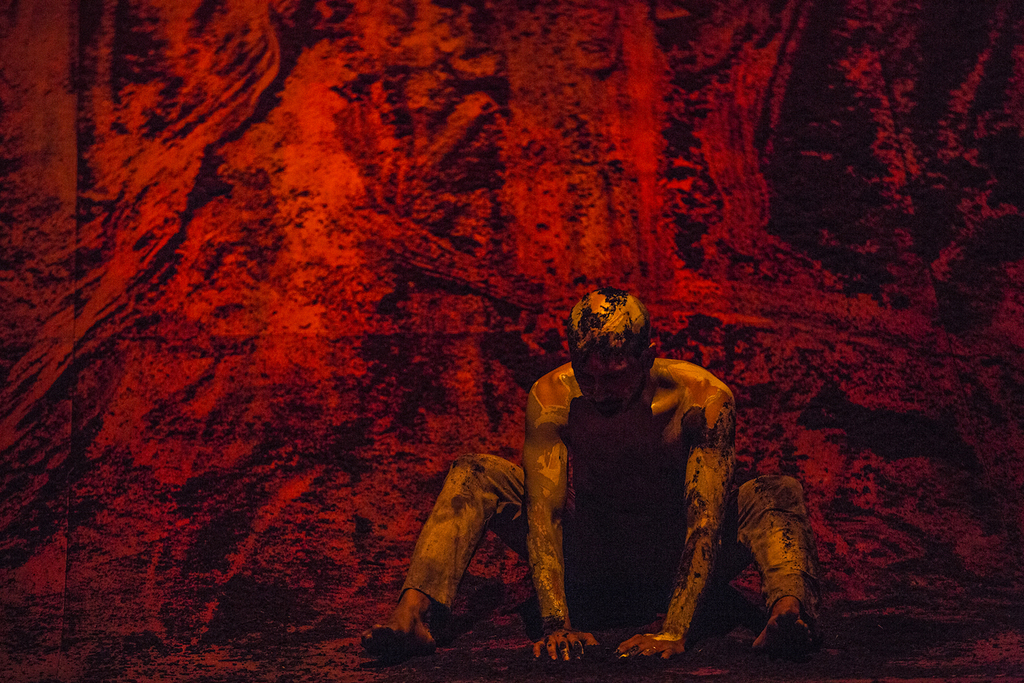 Xenos was billed as Akram Khan’s final solo performance. Now 43 years old, the dancer said of working on the show that his body was ‘complaining all the time’, that it had ‘shut down’. Throughout his hour-long performance there is no sign (at least to an untrained eye) that he could not go on for another twenty years. But the prior knowledge that I would never see this body moving in this way ever again made it difficult not to wonder as to what extent Khan was thinking of Xenos as his swan song. Could the inner tension, between wanting to dance and inhabiting a body that won’t accommodate it, be somehow manifest in the performance?

Yes. During Xenos’ first movement, Khan’s soldier-dancer looks with confusion at the two musicians sitting on the floor, as if to ask – must I continue? And yet his feet keep machine-gun time with the percussionist, B C Manjunath. An intricate polyrhythmic flourish on a two-headed barrel-shaped drum (a pakhavaj, I think) is answered by Khan hammering his feet, gungroo bells shaking all the while. Manjunath’s drumming embodies both Circadian rhythms and an artistic cycle, whereby the master must retire to teach the next generations of dancers. The question – to-dance-or-not-to-dance – is perhaps posed most pertinently with a repeated gesture which interrupts Khan’s footwork: the dancer performs with his digits, fingers seeming to scurry away from him before being caught at the last moment by his other hand. He’s dancing in spite of himself, from head to toe to extremities. Then, rather than holding himself back, Khan suddenly has to push himself forwards: he unties the gungroo around his ankles and holds their strings, walking his feet as those of a puppet. Each seems to weigh a tonne. The lines of bells read as tools, too; ski poles, heralding a long journey across treacherous terrain where every step is underscored by a metallic jingle.

He’s dancing in spite of himself, from head to toe to extremities. 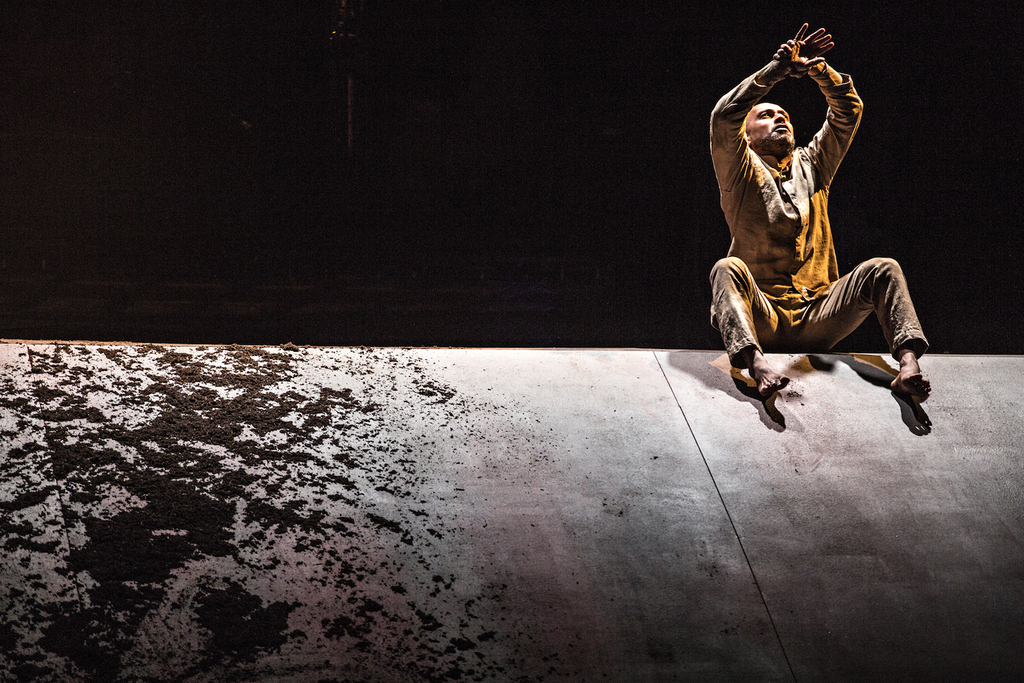 Struggle, physical and metaphorical, underpin the performance. Khan is still wrestling with rope. How many times does he reel it in, lay it out again, make it ripple like waves on a distant shore? Atop the set’s parapet, Khan uses the rope as electrical wire to power a gramophone which promptly broadcasts names of the dead. The stage design is remarkable for its huge ramp, snaked with ropes leading down like trenches and tied to the scant furniture in the set’s foreground. As Vincenzo Lamagna’s score reaches a crescendo, props are dragged with the dirge speed and relentless inevitability of nightmare up the slope and off into the abyss. Khan veers like an abseiler trying to hold them back, failing and falling, clinging on for dear life. It’s the kind of image that burns itself into the mind. Give a man enough rope and he’ll hang himself; mankind left to its own devices wages war, is punished with immeasurable waste and ruin and begins again. Time to stop. 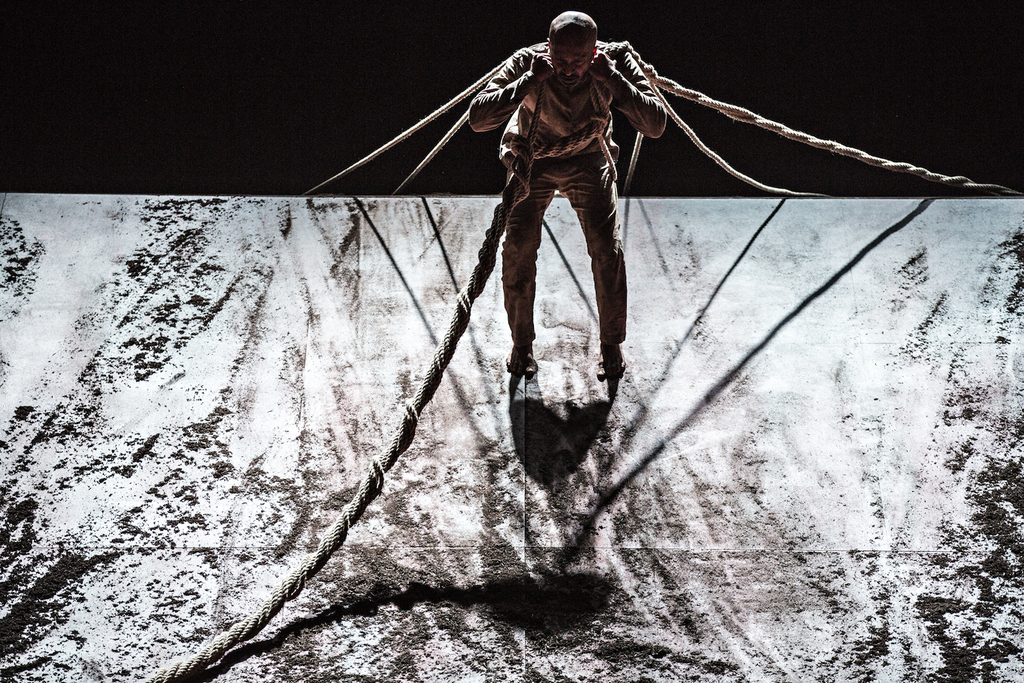