There’s a pleasing sleight of hand, then, in recognising that their content undermines the medium: 56% take painkillers to see them through their shift. Bullet points and statistics are largely the preserve of the establishment: but WEALTH for the TOP 10% is 295 TIMES higher than the BOTTOM 10%. 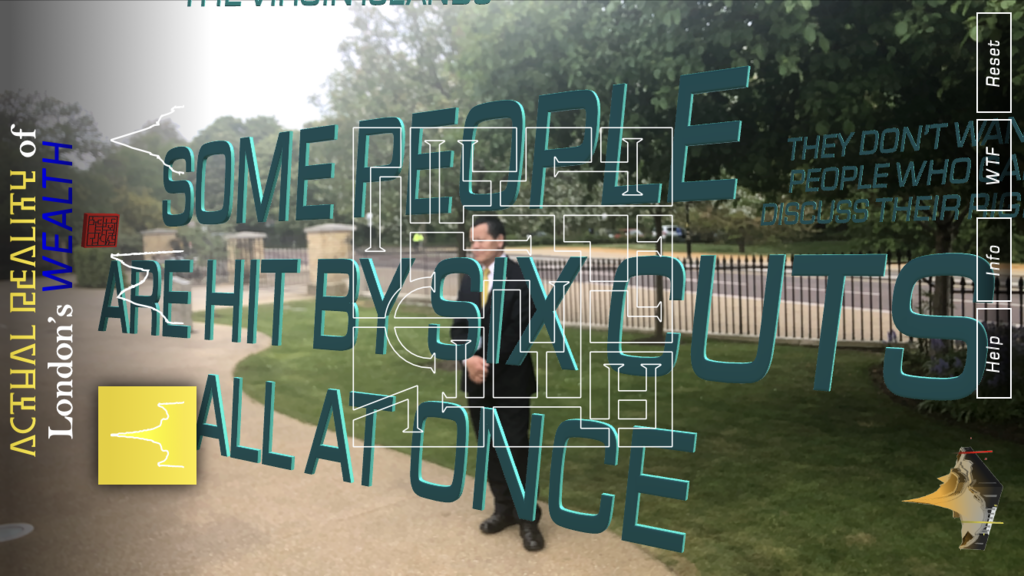 Scan as prompted, and your phone camera becomes a portal into an ‘augmented reality’: quotes from anonymous service workers hang in the air like so much smoke; the Sackler building morphs into one graph after the other, its building blocks points on axes revealed and summarised by swiping to the app’s WTF tab. Disruptive, playful, imploring, Steyerl’s Actual Reality OS brings invisible power dynamics into relief via data models, snippets of testimonial and auditory intervention (“[t]he app’s score is sonified local inequality data”), immersing its user in a story of systemic inequality usually unseen – that is, unseen by the type of person who would visit a gallery or download a conceptual art app. Without sounding like someone who’s enjoying their first spliff – reality is subjective, man. You can’t know how other people are experiencing the world, especially looking down from the dizzying heights of economic and social privilege. As such, Actual Reality OS, “A DOCUMENTARY TOOL/ A SENSORY PROSTHETIC/ A SOCIAL SCULPTURE”, does what it says on the tin: in the refined grounds of Hyde Park and against a building funded by one of the richest families in the world, stark testaments to abject poverty and exploitation spring like weeds between the careful topiary of The Gallery Experience.

Steyerl takes the UK broadly, and the Serpentine’s borough of Kensington and Chelsea specifically, as the demographics to have their wealth statistics processed into her work and your experience of it. With some of the most profound economic inequality in Europe, the gallery’s surrounding area is activated – literally, through the app and its physical sigil prompts, and metaphorically, called to answer for a worldwide injustice of poverty and exploitation – to surprisingly confronting ends. Steyerl’s visuals – graphs and testimonies entering your field of vision via a phone-screen-frame – command all the associated authority of News Night graphics or a shareholder’s presentation slides. There’s a pleasing sleight of hand, then, in recognising that their content undermines the medium: 56% take painkillers to see them through their shift. Bullet points and statistics are largely the preserve of the establishment: but WEALTH for the TOP 10% is 295 TIMES higher than the BOTTOM 10%. So, who’s speaking? 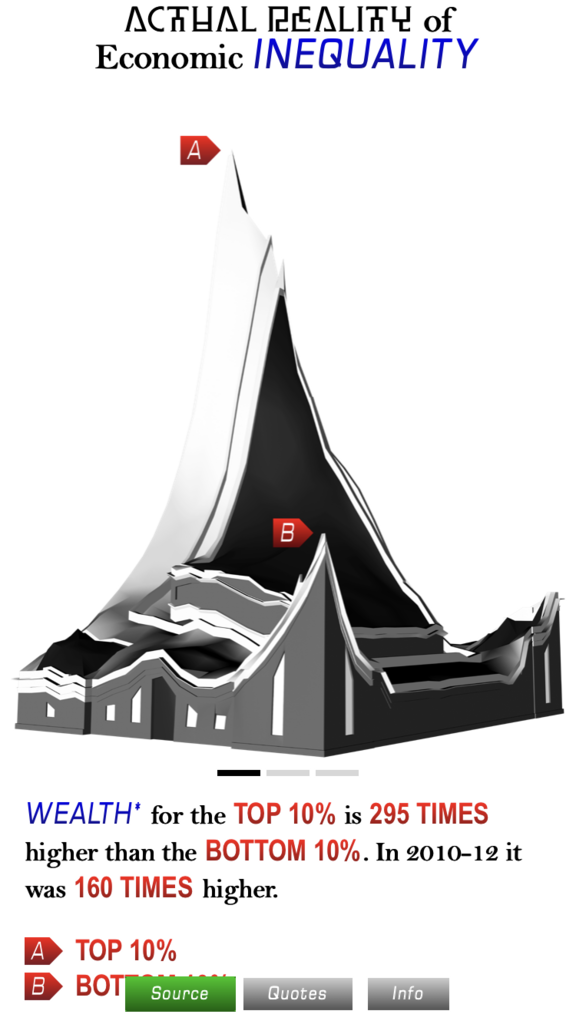 Steyerl’s Actual Reality OS allows you to flick between layers of content, from ‘quotes’ to ‘source’ to ‘info’: “ACTUAL REALITY OS […] shows the Serpentine Sackler Gallery as a documentary social sculpture produced by the economic forces of its environment.” As far as sources go, Steyerl’s app can count Architects for Social Housing, Disabled People Against Cuts, Reclaiming Our Futures Alliance, Unite the Union Hotel Workers’ Branch and The Voice of Domestic Workers amongst its research partners. The data covers all bases, practically anticipating attempts to discredit it – this is, after all, fundamentally shocking stuff. A glimpse behind the curtain. The data’s lack of mediation (there are no manifestoes, no scene-setting paragraphs or photos of teary, malnourished faces) only compounds its power; Actual Reality OS does nothing if not Give It To You Straight. Steyerl’s agenda is to make visible (and audible) the staggering injustices of capitalism and overwork; from the app’s ‘info’ page, “Oligarchs keep luxury properties sitting empty next to neighbours deprived by pathological austerity and planned infrastructural degradation. Human eyes have long been trained to unsee this dimension of stark class reality.” From one graph’s caption: “As of Spring 2016, 1,668* homeless households living in temporary housing were moved outside of the Borough of Kensington and Chelsea by the council. In contrast, 1,857**private dwellings were left vacant in the borough as of July 2017.” I mean, if anything was going to stoke your inner latent Marxist, more empty houses than homeless might do it.

Affluent gallery visitors are confronted with the proximate and lived reality of their invisible neighbours, the latter likely staffing the hotels the former frequent. 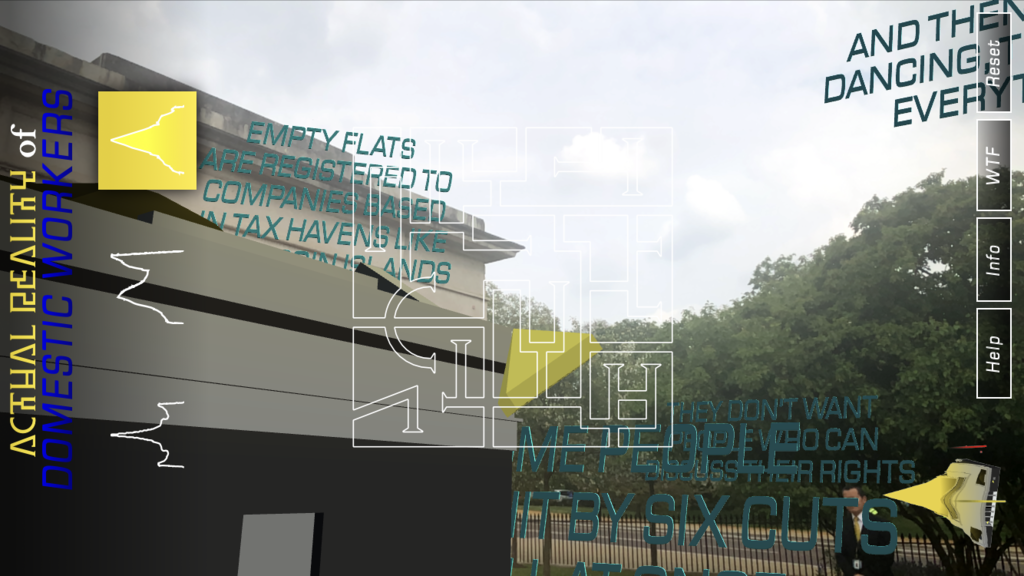 This is, after all, Actual Reality – OS or otherwise. While the app’s data takes domestic workers as case studies, the power structures their experiences exemplify – NO SALARY, NO DAY OFF, LEFTOVERS ONLY, I JUST SURVIVED WITH WATER – affect us all. Some more than others: contemporary art, at the Serpentine and elsewhere, remains an overwhelmingly middle-class interest. Arts Council England’s 2011 ‘Arts Audiences: insight’ report noted their most engaged demographics as the ‘urban art eclectic’ (young, highly qualified, affluent) and the ‘traditional culture vultures’ (older, and ‘having attained a high standard of living’). Meanwhile, the (slightly patronisingly named) cohort ‘A quiet pint with the match’ typically have limited financial means, a lower level of education, and “don’t go to arts events or do creative activities because it costs too much, they feel it’s not for them, have a lack of confidence or it has never occurred to them”. Likewise unengaged are the ‘limited means, nothing fancy’-s, who also tend to “have a low educational level and […] limited financial means”. So: in the hands of Culture Vultures and Urban Eclectics are the stories of Quiet Pints and Nothing Fancys. Affluent gallery visitors are confronted with the proximate and lived reality of their invisible neighbours, the latter likely staffing the hotels the former frequent. 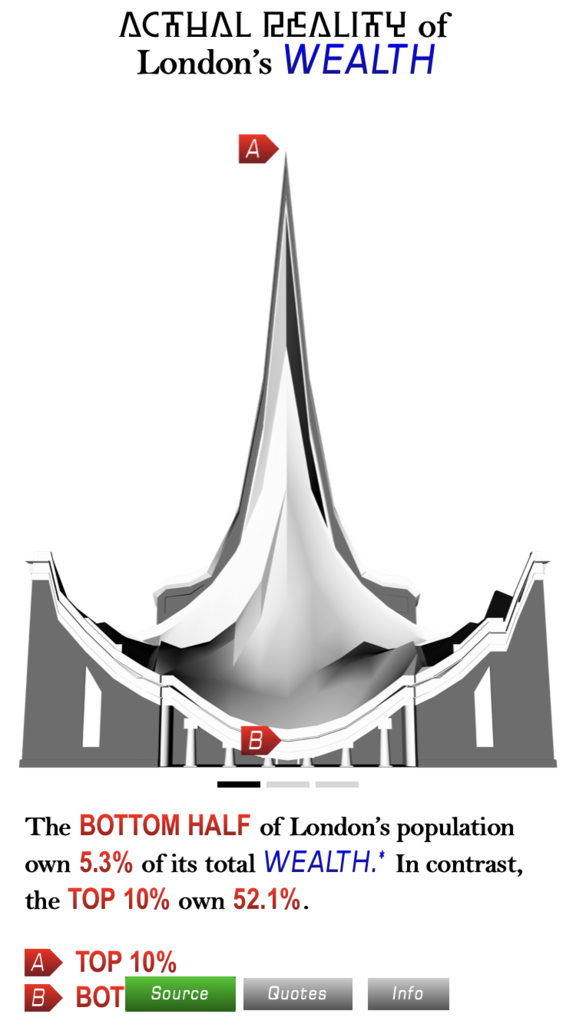 Kensington and Chelsea, of course, is the borough where the 2017 Grenfell fire took place. Some of the wealthiest people in the world live streets away from some of the UK’s most deprived, benefitting from and suffering respectively under a system which upends itself in order to march on, uproots in order to entrench. Haven’t you heard that the rich get richer while the poor get poorer? While Steyerl’s show inside the Serpentine ends on May 6th, the app experience is ‘open’ until January 2020 – it remains to be seen if much will change in Actual Reality before then or in its wake. Still, the move to make information available – particularly across demographic boundaries, and in the context of visual art which is fashionably more concerned with ideas than lived reality – seems a deceptively radical first step. After all, until you know that ’53,000 HOUSEHOLDS WITH 78,000 CHILDREN ARE HOMELESS AND LIVING IN TEMPORARY ACCOMMODATION’ in London alone, the subsequent steps of outrage, action and resolution will remain decidedly out of grasp. See the unseen, and a world opens beneath your fingertips, through your ear buds and in the street next to yours.