Pretty Please with a Cherry on Top

In either case, this is the latest Fourth Plinth commission by Heather Phillipson originally due to appear on 26th March and eventually unveiled 30th July. It will overlook shared experiences, commemorations, protests, and probably some periods of emptiness until Spring 2022. What will the world look like then? 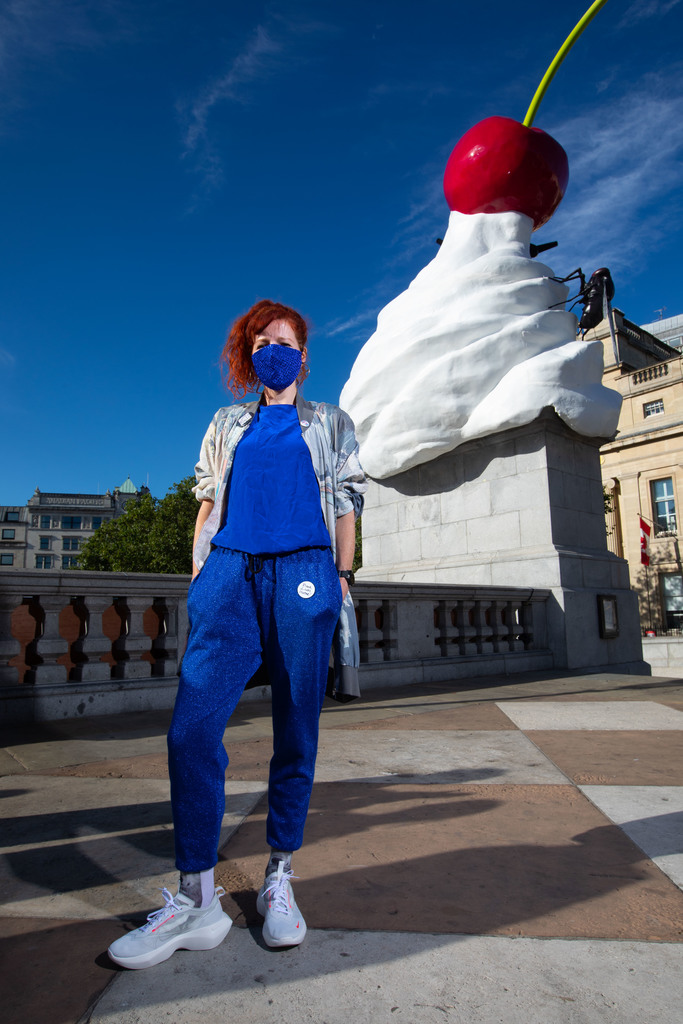 From advertised delights to the way that the cream at the bottom droops over the plinth’s edge: this produces a very specific childlike panic. Someone better lick it soon, or it’ll melt and fall on the ground.

Then, of course, there’s that gigantic fly, which has landed on the side of the sculpture, with all its connotations of disgust and decay. The figure of the fly in art history goes back to at least the 15th century: sometimes a fly as memento mori, or for the devil, Beelzebub — Lord of the Flies. Or perhaps a fly as trompe l’oeil, a self-conscious representation of the painter’s artfulness. While Phillipson’s fly recalls these allusions, my overriding sense of it is akin to a lost line from Alanis Morisette’s ‘Ironic’. Rain on your wedding day, a fly on your cream, who would’ve thought? It figures. 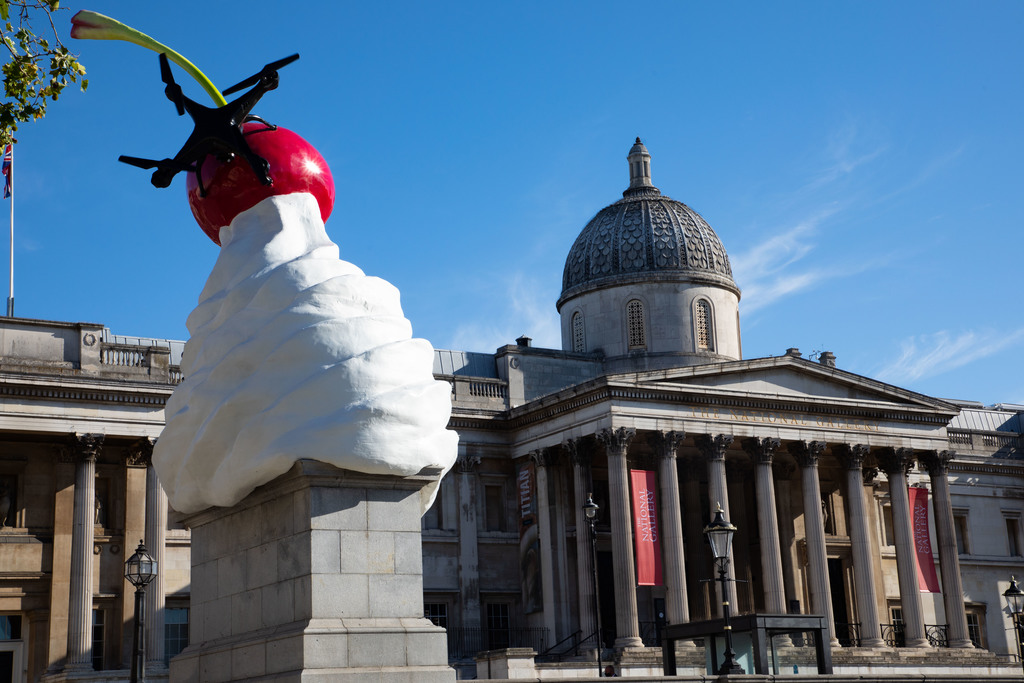 Phillipson doubles her fly with another winged insect having a rest, which turns out to be a drone. Having become a fly-on-the-wall, and moving from the question of feeding ourselves to a live video feed, the drone captures footage of Trafalgar Square, which you can tap into via an app. The sculpture watches you staring up at it, inviting an inversion of power relationships, when suddenly you become the watcher.

All that’s left is…

A CHERRY ON TOP

Cherry on top is an anagram of necrotrophy.

From necro- (‘dead’) + trophy (‘nourishment’), a necrotroph is a parasitic organism that kills the cells of its host and then feeds on the dead matter, while the ‘cherry on top’ is an unnecessary, but welcome, addition to a desirable object or outcome.

Anyway — just throwing that anagram out there. With its purported simplicity, I find THE END makes me want to go sideways: the way the sculpture presents excess sliding into decay is immediately apparent; what else can be got from its wry juxtapositions? 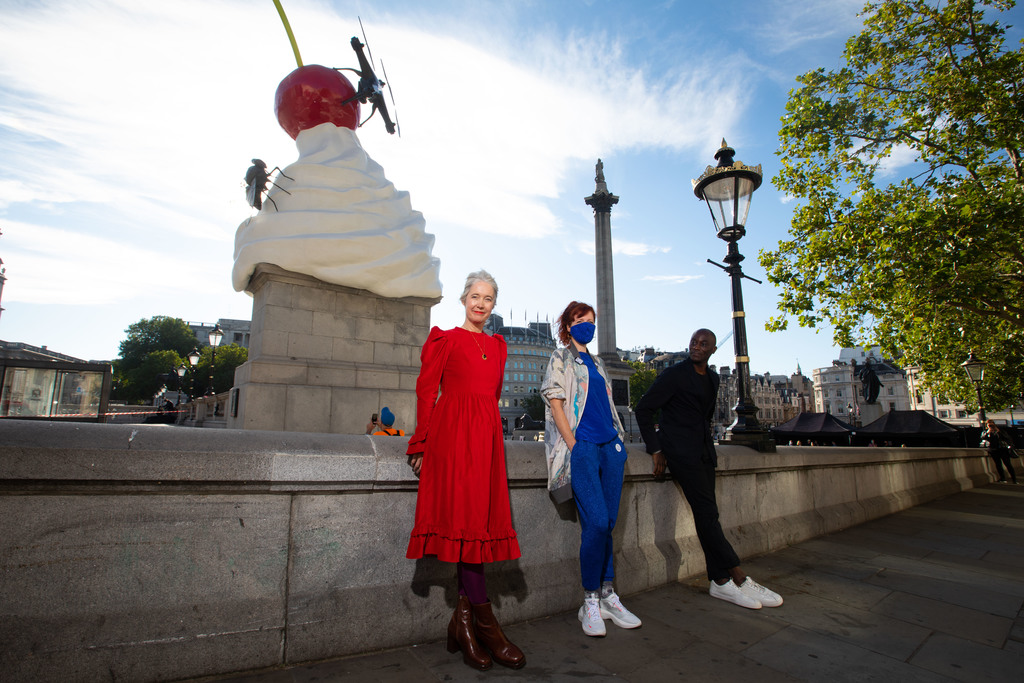 When I hear Whip-hot & Grippy, the title of Phillipson’s most recent poetry collection, I hear the echo of ‘Mr. Whippy’. Going crabwise again, I get to ‘whipped’. Think: the body, excess, power dynamics.

Consider these lines from the collection: ‘The new ice-cream is complete-meal-replacement, frozen with a / slightly gritty texture’. They make me see THE END as part of an ongoing exploration of a slippery world of consumption and disappointment. Spot pleasure and desire in Phillipson’s work and you can soon expect the bonfire to be pissed on.

I first discovered Heather Phillipson’s work as a lowly if precocious undergraduate, in the poetry anthology series called Stop/Sharpening/Your/Knives, for which she also served as an editor. Glancing through these early poems of Phillipson’s now, I find them littered with references to ‘mashed potato’, ‘white bread rolls’ and ‘two brands of Cherry Bakewell — / choice or indecision, the wrong choice or not making a decision. / I will move the fly to the window ledge. I will eat pastry, marzipan.’

Food is just one way in which Phillipson reminds us we are creatures of consumption. Poems and art, of course, are things we consume too; yet not all meaning is easily consumable. Even as Phillipson’s sickly images are sugar-rushed onto the page — or plinth — they are just as likely to be immediately regurgitated. As Phillipson says in a video work, which showed at BALTIC Centre for Contemporary Art, ‘What happens in your mouth might not stay in your mouth. Other people’s tongues, for example. Or words.’ Words, images, and things in Phillipson’s work are sticky, adjacent, entangled; they are never allowed time to settle. As such, her work speaks to an unsettled world, one that — for better or worse — risks sliding from an arbitrary pedestal. 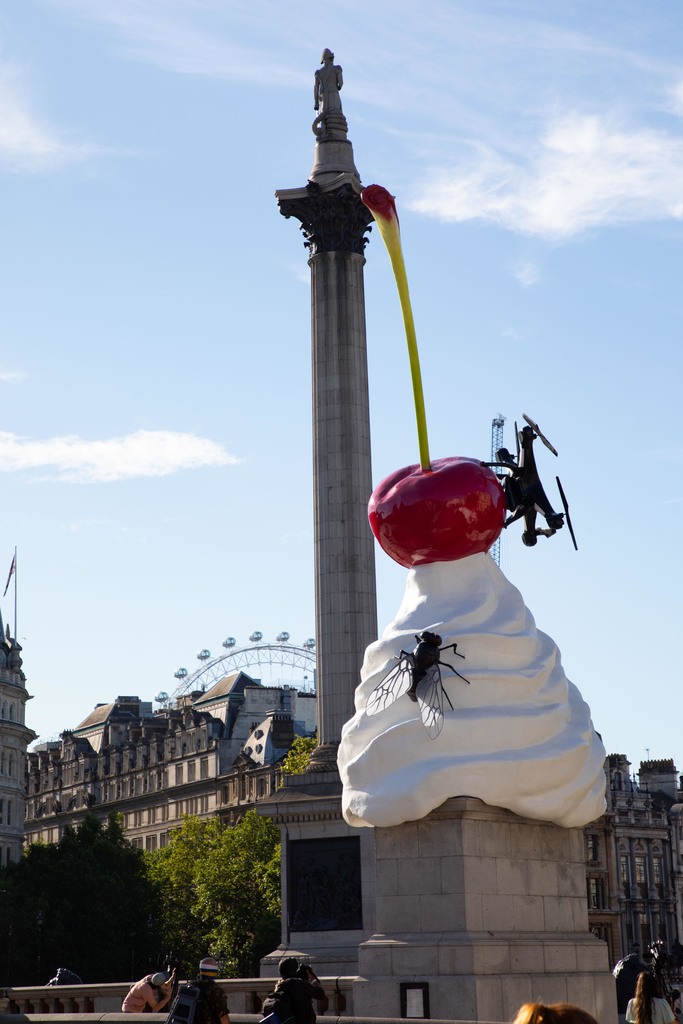 Phillipson conceived of THE END in 2016, the year that Donald Trump won the US presidential election and, of course, Brexit. ‘For me, we’ve been at a point of some kind of entropy for a long time,’ Phillipson told The Guardian. Cream, after all, has the potential to collapse at any moment, yet here, despite everything, remains standing. And standing in Trafalgar Square, THE END speaks to its surroundings with its uneasiness: it’s a site that might just as easily host an inflammatory political protest as an exuberant celebration. That is, before lockdown made the square empty as a de Cherico painting.

Phillipson’s sculpture was supposed to be creamy confection for a volatile political environment, but it has arrived into a very different crisis. In light of the global pandemic, THE END’s playfulness, irony, and cynicism is, well, hard to stomach.

But perhaps we can see THE END as a beginning, as an apocalypse, which in theological writing means ‘to reveal’. Coronavirus has revealed unequal impacts on different sectors of society and illuminated longstanding social injustices: from classism to structural racism and the systematic undervaluation of care work. Likewise, THE END seeks to uncover the cognitive dissonance and mental backflips we perform to maintain a semblance of order: while some are having their cake and eating it too, others are offered empty calories. Instead of willingly upholding cycles of excess and disgust, perhaps it’s time to give the political body some nourishment. Pretty please.