A halo without a head is only an orb. In Secret of the Landscape at Frith Street's Soho Square gallery, Giulia Piscitelli transplants the precise scale and positions of haloes from medieval paintings to a distinctly geographical context, applying the aura of sainthood to maps, archipelagos and coastlines, oceans and landlocked swathes of Europe. She's localising a (Christian) worldview whilst abstracting one of its visual shorthands - showing us what was always there, looked at but rarely seen. It's a powerful proposition, elegantly expressed, and takes one aback.

A halo without a head is only an orb. 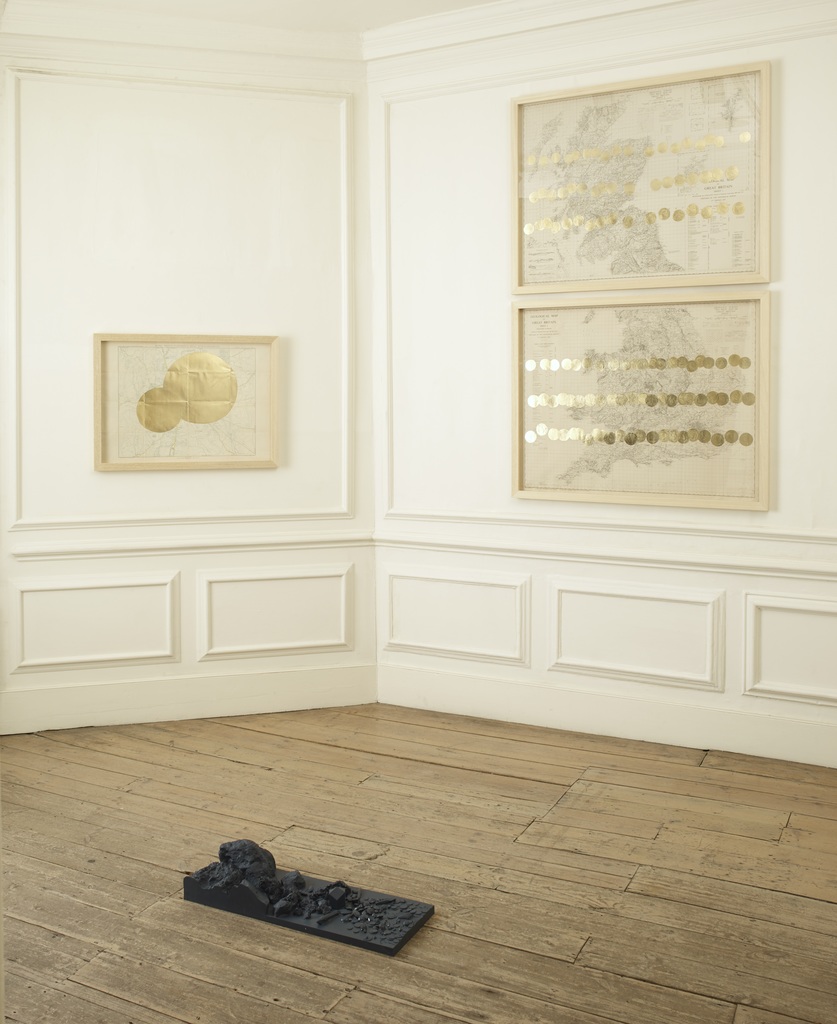 The equation for a Piscitelli work from this series is as follows: first, find a fresco, illuminated manuscript or altarpiece from the Christian tradition. Then dispense with every backdrop, every symbolic lamb, every ripple of fabric, patron, person. All you're left with, you'll find, are the shapes which lately hung around the holy heads. And what do they mean, without the person to whom we attribute their symbolism? What is the sign without the signified?

St. Peter without a halo is only a man. Holiness, an intrinsically super-human attribute, has distinctly human origins. After all, and if we're honest, nothing is sacred until someone designates it so; a saint is only a saint so long as they are venerated as such. However much we'd like to imagine the divine as embodying something distinct and discreet from our messy mortality, it's a quality as subjective as beauty, say, or 'goodness'. Deities and their superintendents are manmade, but the stories we tell about them demand the assumption that they aren't. This particular paradox of religion encompasses another: while there's certainly a Hierarchy of Holiness in most faith traditions - saints below prophets below gods - it's a qualifier that bleeds between categories while, at the same time, reinforcing them. One can't have a bit of a halo, or be a bit divine. More than this, (and presumably a recurring annoyance for Christian artists), Jesus et al look inconveniently like the hoi polloi. How to distinguish them? How to unravel this tangle of thorns? A thought experiment might make things clearer: erase Matthew, Mark, Luke and John, leave their haloes floating and see where things stand.

From the micro to the macro, and from haloes to continents, we turn to the surface beneath the gold leaf. Piscitelli paints on top of cartographical artefacts, linked in one way or another to the tableau she's drawing from. In Christ Rescuing Peter from Drowning, 2017, the artist has applied the haloes of 12 men, painted by Lorenzo Veneziano in a 1370 piece of the same name, to a 1935 map of the Tyrrhenian Sea from the archives of the Istituto Geografico Militare. The oceanic theme of both the found painting and the found map collide in Piscitelli's delicate retelling, less a new idea than a novel spin on the old. While the original story takes place in the turbulent seas of Galiliee, Northern Israel, its associated tradition found an enthusiastic reception many years later in (Catholic) Southern Italy and Sicily, pictured in the map. 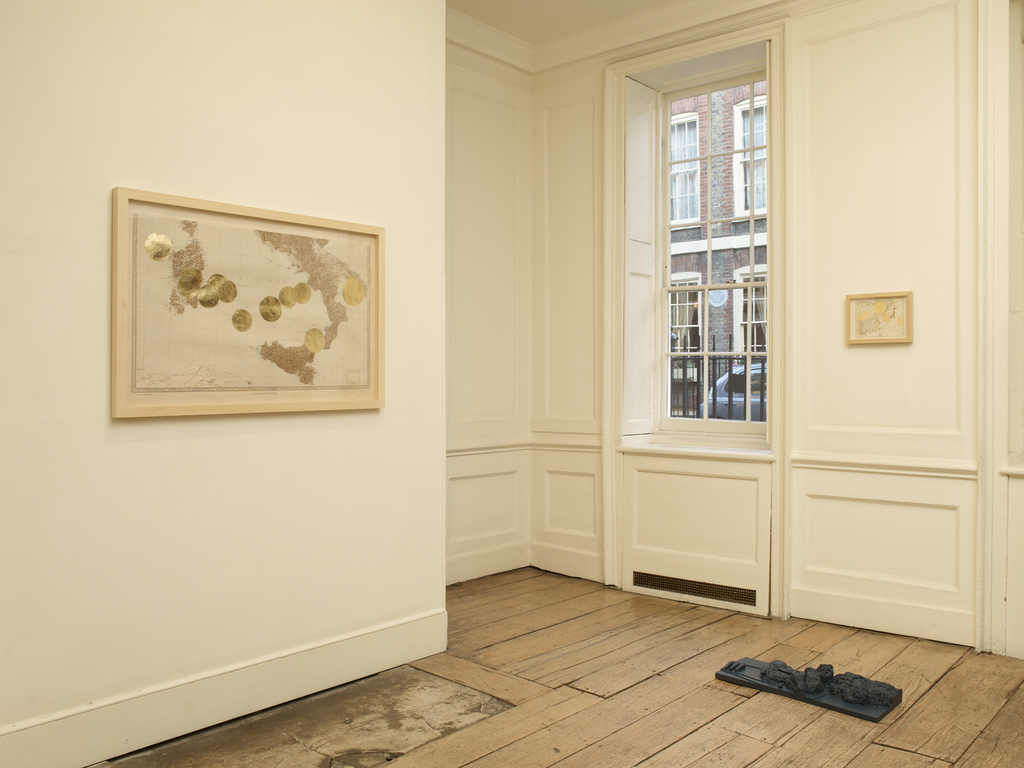 The ways in which we employ myth (and by extension, religion) allow us to tell stories about ourselves rather than about other people.

While precise locations and other historical details are clung to by zealots and archivists, the real significance of faith is where it is felt, not birthed. The artist notes that "for centuries the Tyrrhenian Sea [off the western coast of Italy] has had to deal with submerged bodies, an endless slaughter." We should note that while Peter and Christ made it out of their own watery episode unscathed, there's something of 'x marks the spot' about the disembodied haloes as they hover over the sea and coast of the map, emerging rather than 'submerged'. The golden shapes are grouped together on invisible heads in the original which, when erased in the 2017 iteration, seem to indicate a particular concentration of unknown incidents. Unless you're feeling particularly devout, you could acknowledge that the ways in which we employ myth (and by extension, religion) allow us to tell stories about ourselves rather than about other people. A civilisation troubled by deaths at sea might well slot two heroes into the story of a near drowning. In turn, the tale from one coast can be applied to another, from Israel to Italy and back again. Freed from the specificity of Him Here or Them There, the palimpsest of faith is wonderfully versatile.

Downstairs, the sea presents its own work - with some help from Jessica Warboys. Aptly named Sea Paintings, this series of unstretched canvases are made by immersing the material in sea water before casting minerals onto it and either submerging it again or allowing it to dry. The sand, the artist's hand and the water collude in bringing together phenomena without an agenda. On the contrary, Warboy's material is exposed to elements indifferent to her interventions, their traces necessarily a kind of fingerprint of time and place: impossible to predict or replicate. It's a bit like pulling ten strangers off the street and watching them interact at a party. The Sea Paintings engulf the walls of the gallery, reaching from floor to ceiling and hanging loose where their dimensions exceed those of the space. The curation gestures to layering one setting on top of another, whilst acknowledging that the white cube and waves can never be reconciled. 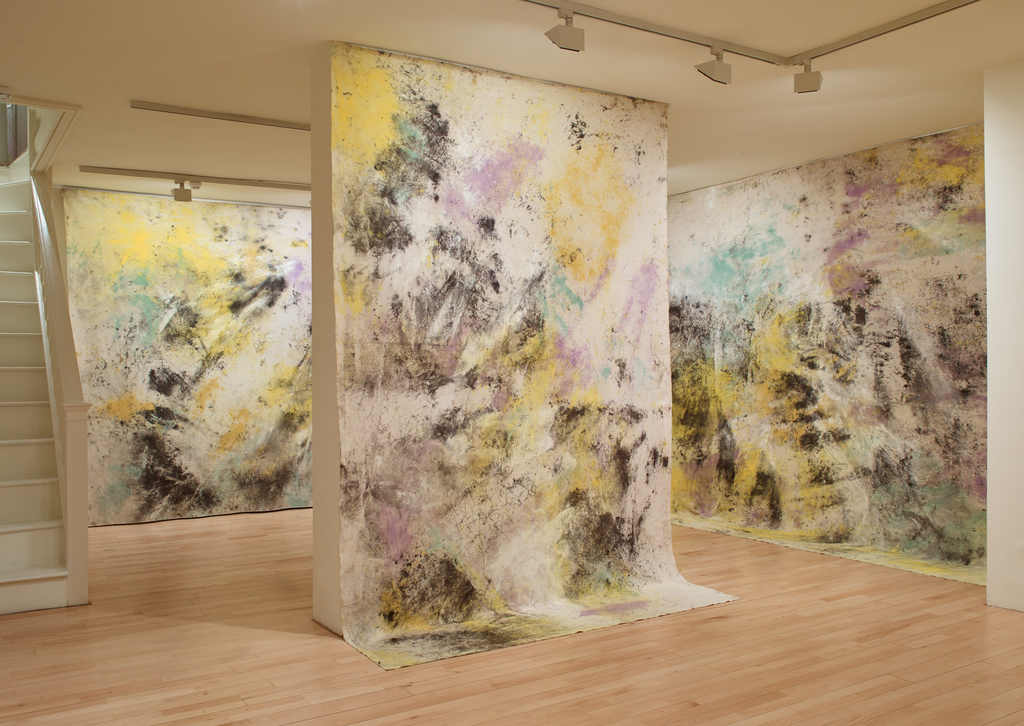 Piscitelli understands something similar. Just like Warboys, her philosophical position is outlined by experimenting with its foil. Piscitelli's thesis - that holiness arises from the human - is proven by removing human figures from paintings and showing us what was ever thus. The impossibility of rinsing the man from the man-made is only foregrounded by the exercise: after all, the very shape of a halo requires a human head to sit around. For her part, Warboys has ceded as much control to the natural elements as possible - and yet we hang her work in a context designed to venerate the individual and the genius. We are the stories we tell, and the work we make. Whether dealing with the natural or the super-, we just can't shake ourselves.

All works courtesy the artist and Frith Street Gallery, London.