Grasping the ungraspable: 'Living With Gods' at the British Museum

"Thinking, Making, Symbolising." These are the words that confront you on entering 'Living With Gods', printed in large white letters onto thinly stretched, black drapes, sepulchrally lining the walls at every turn. Later: "Light, Water, Fire," as you find yourself steered through the curving spaces of the exhibition, gently disoriented as ambient chimes ring in the distance, unanchored and floating. All of these placeholders - these semantic trinities - tell us something, not only about religion, but about our very human condition: what sets us apart from our evolutionary ancestors - as the show's first exhibit, a 40,000 year old Lion Man figure, suggests - is our drive to make sense of the elements around us, through perpetual processes of creation.

All of these placeholders - these semantic trinities - tell us something, not only about religion, but about our very human condition 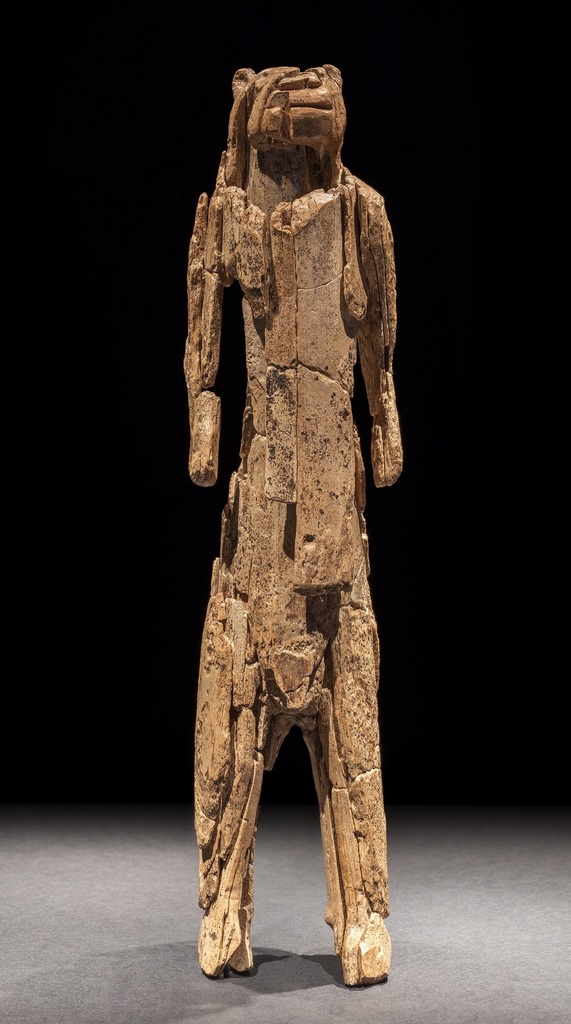 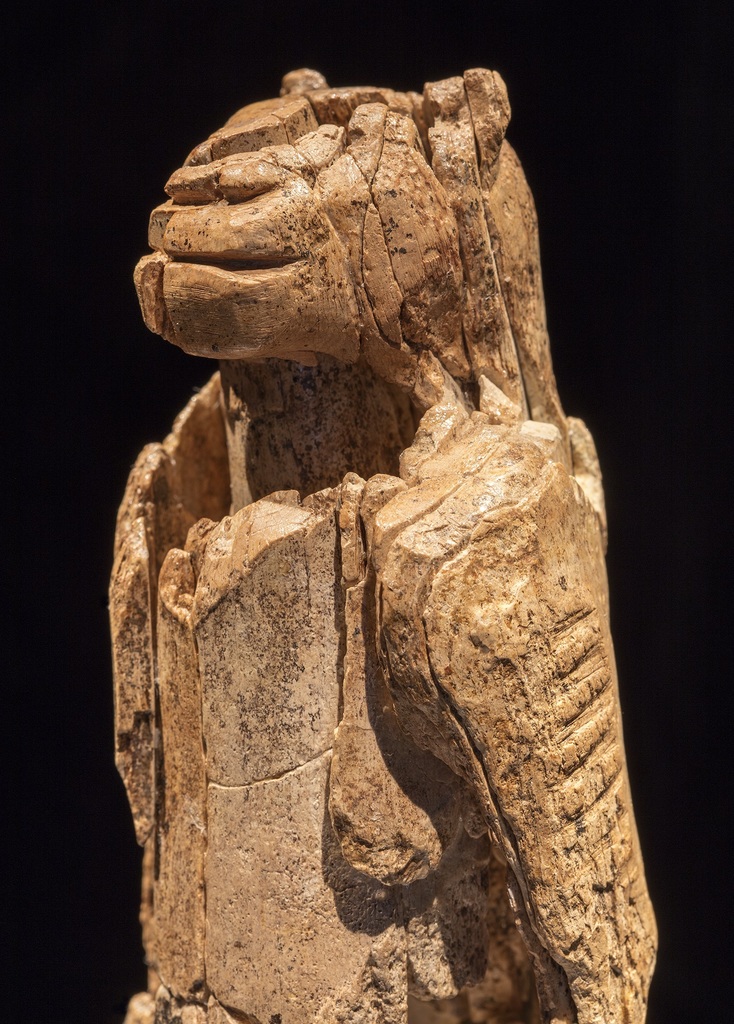 Turn the corner to find an ancient, Japanese Shinto mirror, which sets the stage for one of the exhibition's central questions: the nuanced relationship between art and religion, made manifest through the compulsion to create. Mirrors in Shinto were believed to contain Kami spirits, divine beings of the natural world, and they feature (as seen later in a Kamadina shrine) as a prominent motif in ritual and practice: when one prays to a shrine, one sees themselves, a fraught dialogue between the internal and the external, the divine both within and beyond the self. The mirror serves to bind religion with reality, recalling Shakespeare's immemorial reflection: the purpose of art, intones Hamlet, is "to hold as 'twere the mirror up to nature."

Where does religion end and art begin? In conceiving religion as the conclusion of "making, thinking, symbolising," the exhibition synthesises the two, while the curation - straddling the museum curiosity cabinet and the art gallery installation - prompts us to wonder where these divisions disintegrate. 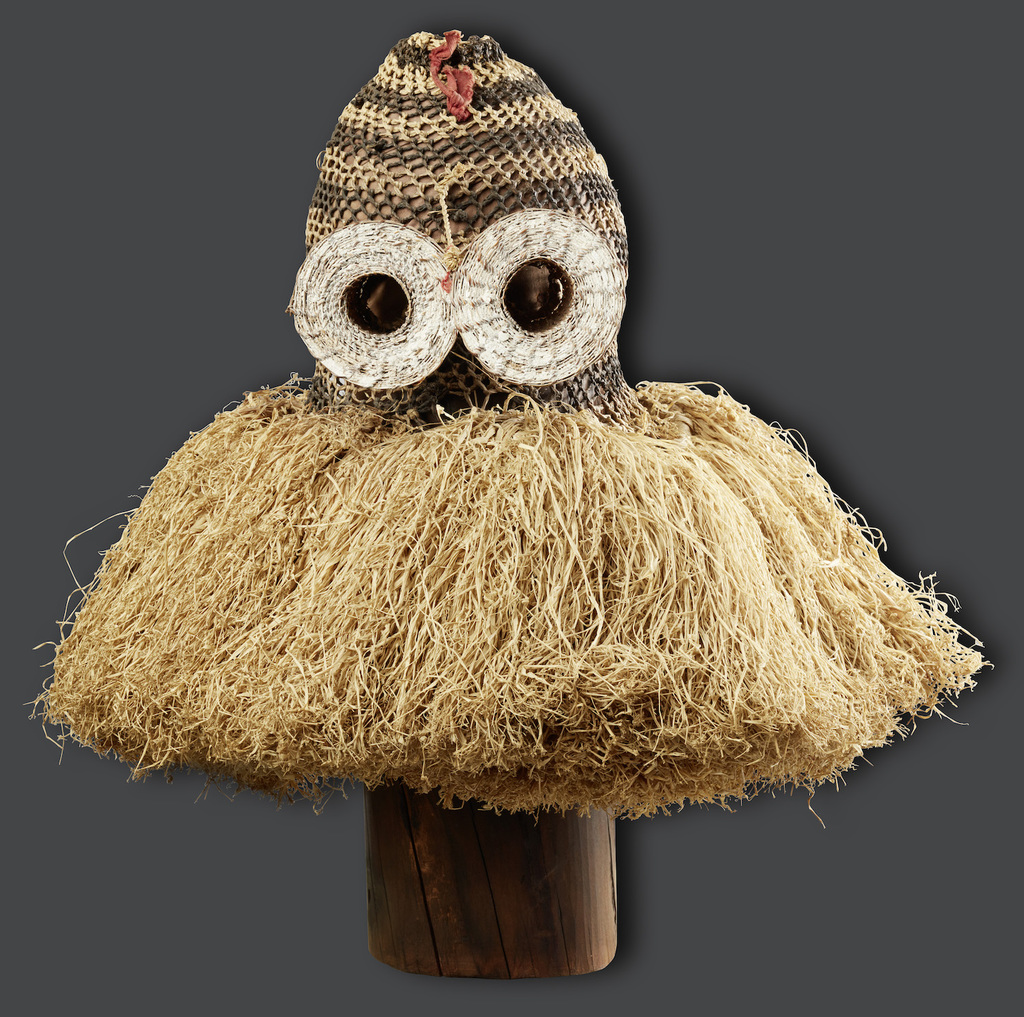 Wukun Wanambi's memorial poles are a striking manifestation of this gap. The artefacts take the form of traditional, Australian Aboriginal larrakitj: hollowed tree trunks that serve as coffins to hold the bones of the dead. As the poles decompose, the human bones are released, and wandering spirits can seep into the water to begin their ethereal existence. Yet, Wanambi's 2013 memorial poles, intricately painted with tiny fish, have been divorced from their religious context: these tree trunks were never created with scared intent, to house mortal remains, but were made as works of installation art. Entirely at home amongst objects of devotion, the inclusion of Wanambi's work suggests a redundancy in trying to iron out the differences between art and religion: both result from creative impulses, both speak to culture and tradition.

This disruption of creative boundaries is further complicated by the invocation of yet another creative capacity: science. At the heart of the exhibition sits a large, bronze statue of the Hindu God Shiva, encircled within the Tandava, the perpetual dance of creation and destruction. The short item description informs readers that an identical statue stands outside CERN, home to the Hadron Collider and one of the world's leading scientific research institutes. Physicist Fritjof Capra delineates its significance: "Hundreds of years ago, Indian artists created visual images of dancing Shivas in a beautiful series of bronzes. In our time, physicists have used the most advanced technology to portray the patterns of the cosmic dance. The metaphor of the cosmic dance thus unifies ancient mythology, religious art and modern physics." For Capra, and for scientists at CERN, the Tandava symbolises the play of sub-atomic particles, "the very essence of inorganic matter." And, as if to confirm the deep relationship between science and religion, when the Higgs-Boson was discovered in 2013 - nine years after the unveiling of the Shiva statue - it was provocatively named the 'God particle'.

"Hundreds of years ago, Indian artists created visual images of dancing Shivas in a beautiful series of bronzes. In our time, physicists have used the most advanced technology to portray the patterns of the cosmic dance. The metaphor of the cosmic dance thus unifies ancient mythology, religious art and modern physics." 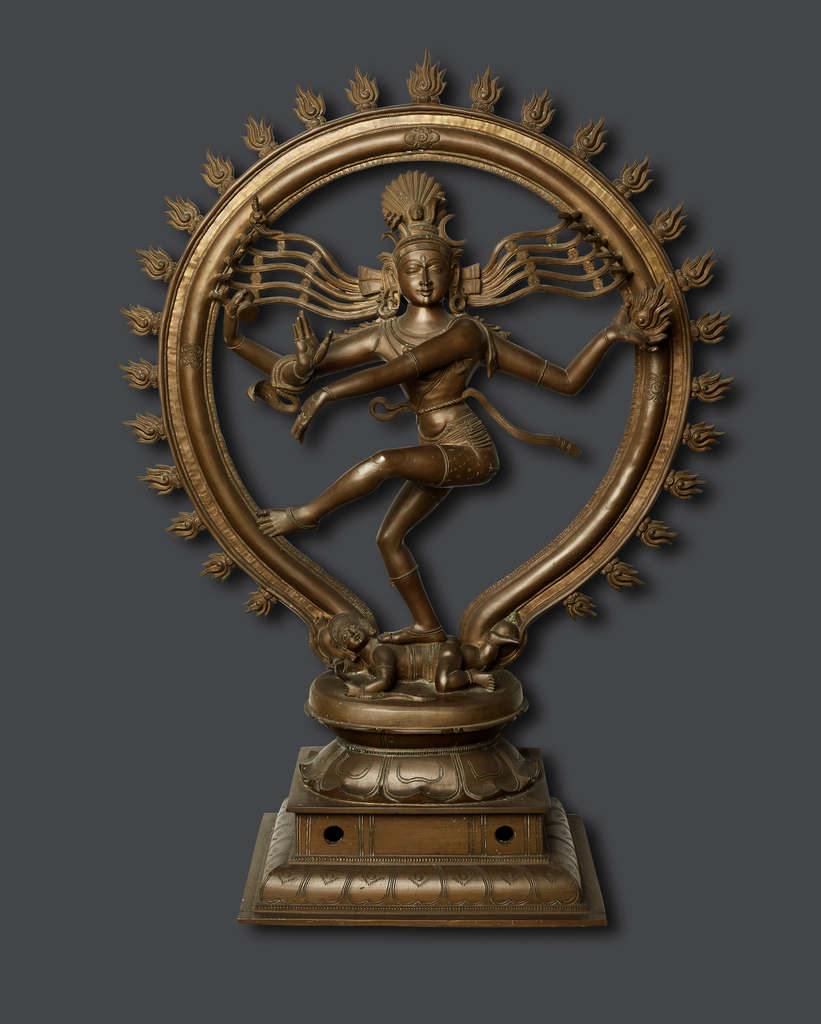 The exhibition moves in a loosely chronological direction, towards religious artefacts of the twentieth and twenty-first centuries. Here, emphasis shifts towards the relationship between politics and religion, confronting the turbulence faced by organised religions over the past hundred years, especially in the wake of government sponsored communism. In Russia and China, as the exhibition details, traditional faiths were abolished under communist rule, to be replaced with the worship of a different type of deity: the dictator. Figures such as Lenin, Stalin, and Mao, assumed semi-religious status, a fact that 'Living With Gods' documents through propaganda imagery and cultural objects (an ornamental car hanging, emblazoned with Mao's face and a faithful text promising a safe journey to the bearer, is a good example).

The message is clear: remove religion, and cultures will find ways of reinstating it. This is even starker in the wake of recent political collapse. In post-Soviet Russia, as 'Living With Gods' shows, religious scholars are turning avidly back to traditional, Orthodox Christianity, studying not only rites and rituals, but spaces and objects, clothing and art, to resuscitate centuries old conventions. 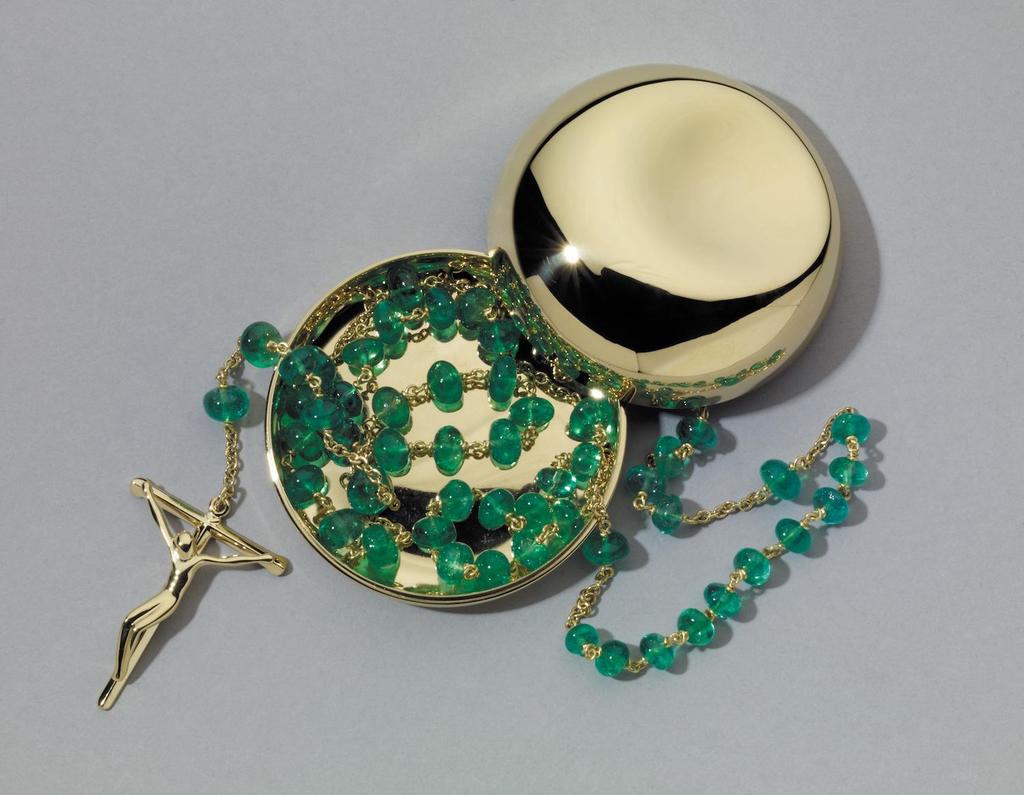 Christian rosary, Designed by Elsa Peretti for Tif fany & Co.,
Barcelona, Spain, 21st century
The 52 Indian emeralds are arranged in groups of 10 for the repeated words of the Hail Mary separated by single gems for the Lord’s Prayer.
© the Trustees of the British Museum

Indeed, as the closing cabinet of the exhibition poignantly shows, today's refugee crisis is tightly bound up with religious tumult. Two artworks by Syrian artist Issam Kourbaj are displayed in the last case: 'Lost' - a pair of children's t-shirts, dipped in plaster and sprayed with the words, "Unknown Girl, 3 Months" and "Unknown Boy, 6 Months," and 'Dark Water, Burning World', a set of tiny boats, made from repurposed bicycle mudguards and filled with burnt matchsticks. Like Wanambi's memorial poles, these are not objects of devotion, but works of religious art, and perhaps the most powerful pieces in the space of the exhibition.

It seems hard today not to rail against religion. Crises and conflicts, in both the East and the West, are incessantly fuelled by personal religious extremism and political religious divide. And yet it prevails, offering pockets of comfort, as Francesco Tuccio's Lampedusa Cross shows, a roughly hewn crucifix, carved from the driftwood of wrecked refugee boats. Startling in its rugged simplicity, the cross, like many of the exhibition's historical artefacts, reminds us of the profound beauty of human spirituality - and its powerful creative force. 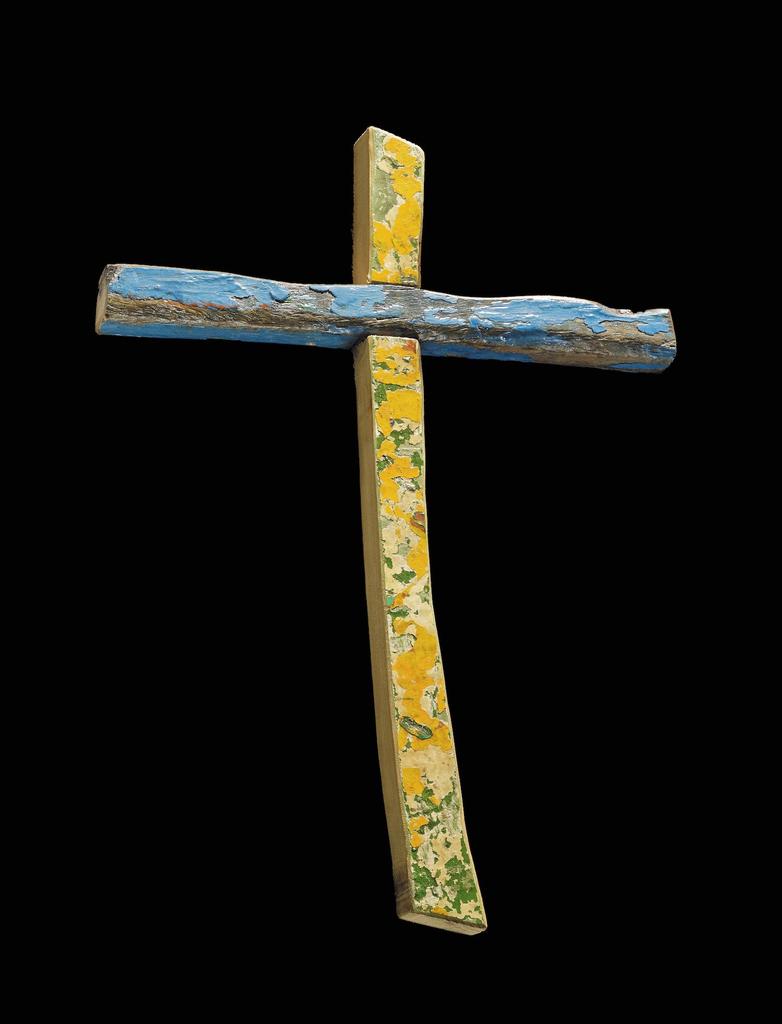 Lampedusa Cross by Francesco Tuccio
Lampedusa, Italy, 2014
When a ship carrying refugees and migrants sank off the island of Lampedusa in October 2013, more than 300 Somali and Eritrean lives, both Muslim and Christian, were lost. Responding to the tragedy, Francesco Tuccio made small crosses, Christian symbols of hope and salvation, for the survivors and to engage people worldwide with the humanitarian disaster.
© the Trustees of the British Museum

Instead of condemning, maybe it's time that we look to religion - both the secular and the faithful among us - to tell us something about our own humanity. Maybe it's time that we stop polarising the products of our creative impulses. In a time of chaos and confrontation, a time defined by its obsession with technological and economic progression in strictly linear terms, perhaps the persistence of religion - and the cultural phenomenon of its return - might reveal important truths about the human condition. Let me put it this way: if scientific breakthroughs of the twentieth century have told us anything, it's that linear time is as much a human construct as religion or art. Albert Einstein showed us that - and he was devoutly Jewish.

Let me put it this way: if scientific breakthroughs of the twentieth century have told us anything, it's that linear time is as much a human construct as religion or art. 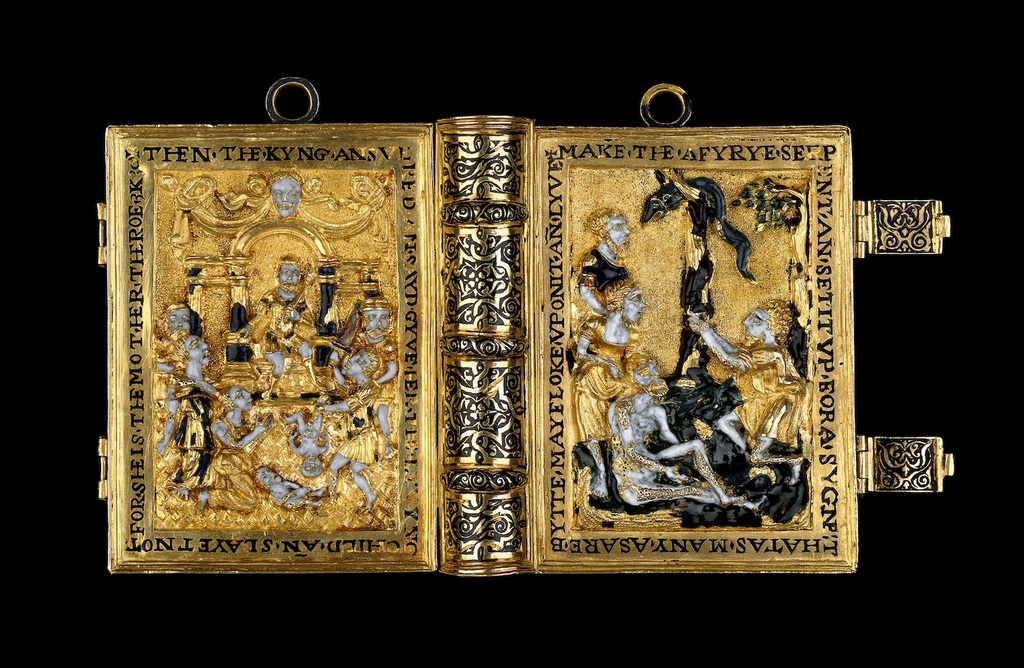 Miniature prayer book
London, UK , 1540–76
This enamelled gold case contains a unique miniature printed book of morning and evening prayers, hymns, psalms and meditations. It was worn on a belt and may have belonged to Queen Elizabeth I.
© the Trustees of the British Museum

Barry's poetic fragment reads like a musing on spirituality. Yet the piece - premiered in New York in 1970 - was, in fact, created as a précis for 1960s Conceptualism. This could be a description of art, a description of religion, or even a description of certain strands of scientific investigation (I'm thinking in particular about quantum physics, with which both Einstein and researchers at CERN have been concerned). Indeed, as printed on one wall of the exhibition, Einstein declared that: "The most beautiful and profound emotion we can experience is the sensation of the mystical. It is the sower of all true science." Grasping the ungraspable, voicing the ineffable, determining the indeterminate: this is what makes us human, the knowledge that we cannot know, but that we must keep inventing and reinventing forms to describe the limits of our comprehension. Science, art, religion. Thinking, making, symbolising.

Living with gods: peoples, places and worlds beyond runs until April 8th in Room 35 of the British Museum. Supported by the Genesis Foundation.