I thought Snoopy and Charlie Brown belonged on the pencil cases of people who wanted to show how fun and quirky they were without offending anyone. Oh, how wrong I was.

Schulz’s minimalist style attunes the reader to nuance, to the slight missteps that make us feel alone rather than the huge bungles that land ACME anvils on our heads. 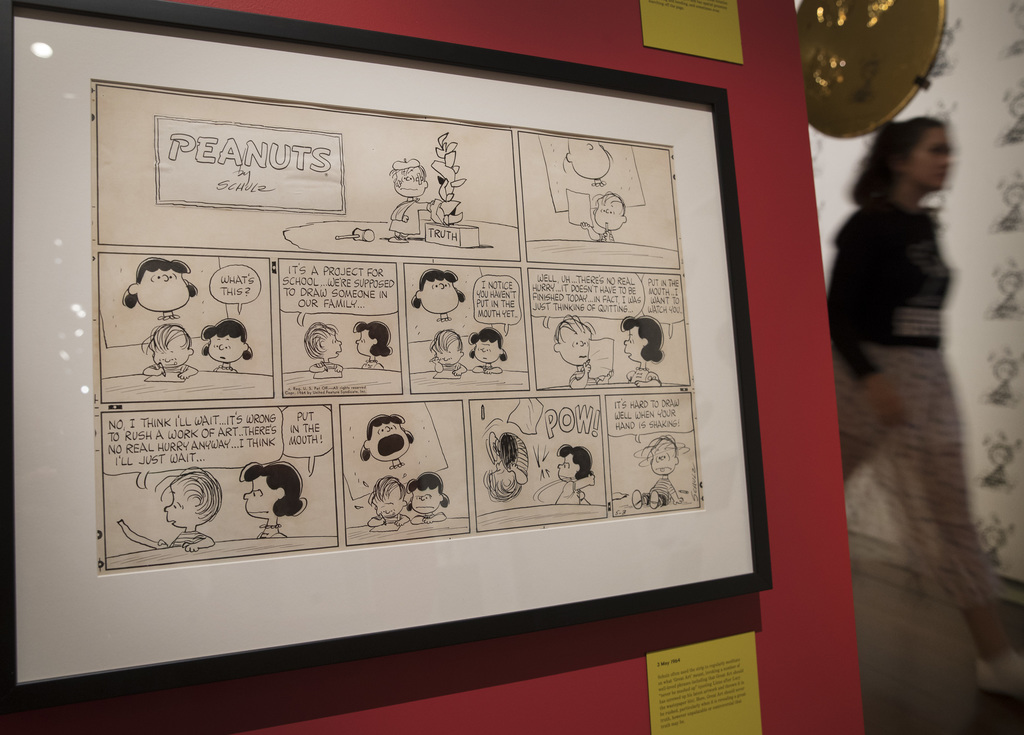 The 4-panel strip that changed my mind is from 1 February 1954, and comes early on in Somerset House’s new exhibition – Good Grief, Charlie Brown! – running until 3 March 2019.
(i) In the first frame, Charlie Brown is standing, arms by his sides, looking on as a friend plays with a train set. Charlie’s mouth is a straight line, and the set spans the entire living room. It looks like it would take Charlie many strides to walk the track’s diameter.
(ii) The next panel shows Charlie putting on his coat ready to go home, his face unchanged.
(iii) Charlie is walking home. There’s a scratchy flourish of energy in the pen-strokes of long grass behind him. Alas, no zing for Charlie. His hands are in his pockets. He’s looking straight ahead.

(iv) We see Charlie in his living room. Here, the perspective and the use of blank space make the sofa feel both huge and far away. Charlie is sitting on the floor, hands on his knees, looking at his tiny loop of a train set, like a drifter huddled next to the dwindling flames of a burn barrel. His mouth is still a tiny straight line. He has eyebrows in this frame. They are a fraction drooped. Not sad, but blue.

In another strip, Snoopy wishes he were a snake so he could scare Linus. He makes himself very flat and hisses. Linus continues reading his book. Sigh. Time and again, this is the way the story goes: ‘I wish this aspect of my life was different.’ Beat. ‘It’s not.’

The exhibition is curated thematically — useful for the initiate like me, and thought-provoking, I’d imagine, for long term fans. Downstairs, we’re given some biographical information. Charles M. Schulz grew up in St. Paul, ice-skating and playing baseball — the bonds of friendship and the importance of community ringing out over rink and field and comic strip. This biographical section flows into another, examining aspects of Schulz’s technique. Upstairs, we consider deeper themes in the work — Existentialism, Psychiatry, Feminism — as well as its wider cultural impact. The two floors are in conversation with each other: downstairs highlights the simplicity of quick line sketches, and an innocent humour; upstairs, depth and complexity.

And the more you look, the more you notice how simplicity and complexity are married in the work itself. Schulz’s minimalist style attunes the reader to nuance, to the slight missteps that make us feel alone rather than the huge bungles that land ACME anvils on our heads. Schulz’s work is quiet, and so the inevitable emotional non sequitur that occurs between the penultimate and the last frame is all the more devastating. Here comes someone with an umbrella! Oh, they’ve walked on by and left me in the lashing rain. The accumulative effect of Peanuts’ entire run (almost fifty years) communicates an existential dread, but in any one strip we’re dealing with nothing more than everyday worry. On 27 July 1950, Violet asks Charlie Brown and Linus if they’re worried about anything in particular. ‘Oh no… we’re worried about everything!’ Charlie replies. ‘Yes,’ Linus joins in. ‘Our worrying is very broadminded!’ While it might not be so immediately intense, worry is as profound a subject as dread – it suffuses rather than arrests, creeping in the background until it taps us on the shoulder: “Boy, did he ever glare at me! He probably isn’t feeling well…”

Maybe the greatest sadness of Peanuts, amidst all the tiny tragedies, is its longevity – Charlie never learns, and neither do we.

Charlie Brown is an everyman, and he is a loser. His kite is never airborne for long, always getting tangled in the Kite-Eating Tree. Every time he goes to kick a football, it’s whipped away at the last second, and he ends up flat on his back. Schulz said, ‘Most of us are much more acquainted with losing than winning. Winning is great, but it isn’t funny.’ But there’s more to it than that. Time after time, Peanuts taps into broader anxieties surrounding failure and success. In the 1950s, when Americans had military victory under belts and dollars in pockets, the American Dream meant freedom and opportunity for all. Promotions, trophy wives, white picket fences – but we can’t all be winners. What about the rest of us Blockheads? And what if the dream isn’t all it’s cracked up to be?

When all the world is baiting succeed, succeed, succeed, we might well go out and erect a white picket fence – but there will always be a taller, whiter, more pickety fence to be had. And then there are the fences we build in our own path. Schulz is right — ‘winning’ isn’t that funny. Lucky, then, that most of us are losers. Charlie Brown’s imperishable drive to keep-on-keeping-on nonetheless, his incorrigible march onwards, provides the material for hundreds of cartoons. It’s an inexhaustible subject. Maybe the greatest sadness of Peanuts, amidst all the tiny tragedies, is its longevity – Charlie never learns, and neither do we. 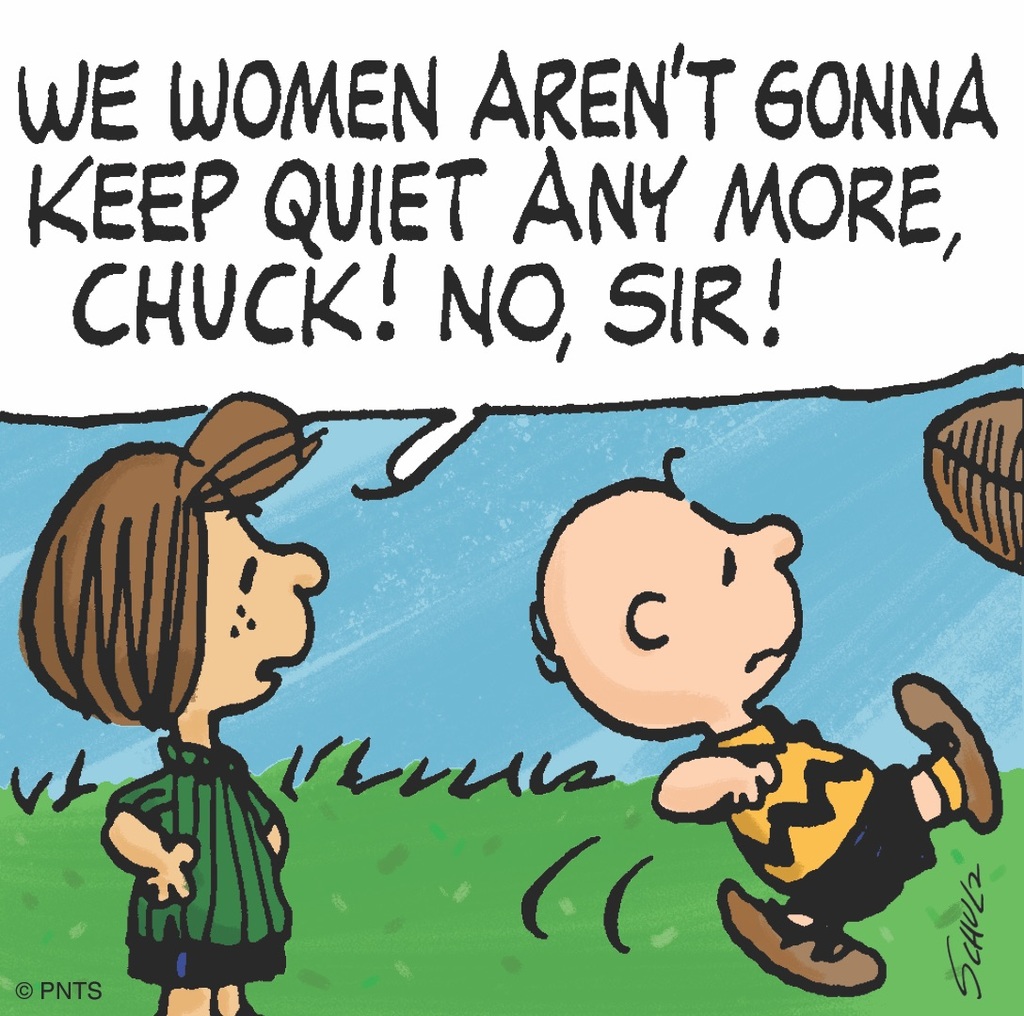 I’m left wondering what Charles M. Schulz would have made of 2018. I, for one, can identify with the feeling of having the football pulled away at the last moment. The feeling of falling flat on my arse. Of navigating, play by play, today’s myths of success. What would Schulz have made of indoor cycling classes, the anti-inflammatory properties of turmeric or moringa, woo-woo home decor, organic pet kibble, video game rehab, mess-free egg peelers, or intentionally ugly tattoos? Are these crazes, which feel so modern, driven by anything so different to Charlie’s frustrated aspirations? A train set might be supplanted by an x-box, but the spectre of the New Model haunts both. Charlie’s dad might work in a call centre rather than a barber shop, but there remains the promotion to be denied, or granted. What’s the difference? Win or lose, we’re all human. In 2018, if you want to do Bikram yoga, and get yourself a detox smoothie on the way home, go for it! But you’ll still be you beneath the green juice. You blockhead.