Ghosts in the Gallery

A lawyer is poised, amongst a hubbub, ready to throw a sizeable rock at a media company’s van. Police mill around, visibly overwhelmed by the scale of unrest, but this is no longer their battle. The scene’s antagonist, in full court regalia, is only one of a group of judiciary officials who are rioting in protest of the unflattering light in which the media has portrayed a recent scuffle between their cohort and Bangalore’s law enforcement. They cannot work under these conditions, they assert – harassed, impeded, intimidated.

A lawyer is poised, amongst a hubbub, ready to throw a sizeable rock at a media company’s van. 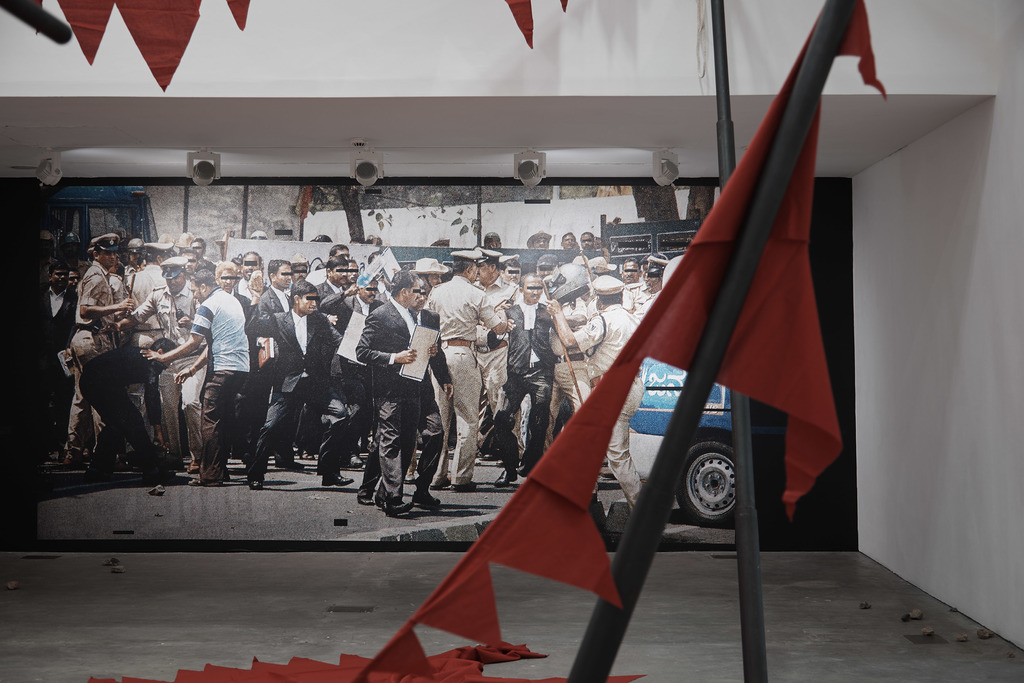 Although the situation originated with the actions of the police force, the fury of the judiciary morphed into one aimed squarely at the reporters who misrepresented their cause. Sheela Gowda’s In Public depicts the moment these tensions gave way to outright brawling. But who captured it? Almost certainly, a member of the media at whom the lawyer’s ire is directed. The circularity of this argument is communicated visually and proves almost impossible to straighten out – the image, we imagine, will be used to further the media’s argument that the judiciary is violent and implacable; so they will riot; so they will be photographed rioting; so the circle cannot break. 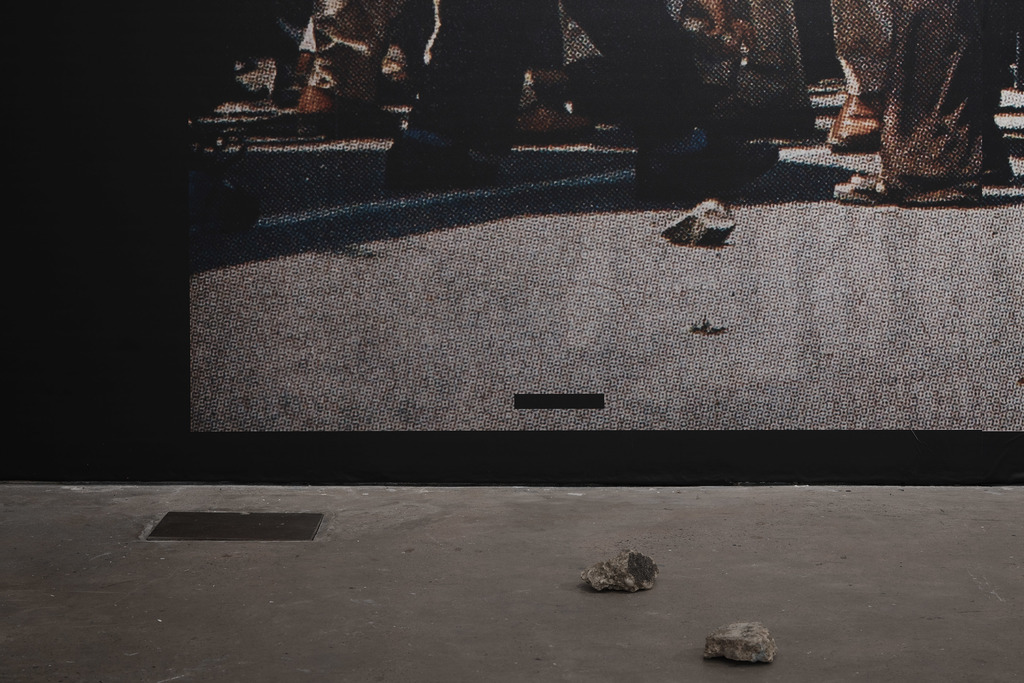 Bangalore, the subject of In Public and the entirety of Gowda’s untitled exhibition at Birmingham’s Ikon Gallery, might seem a world away from rainy, placid Britain. Gowda, however, has drawn the two locations together in a way which means we cannot ignore their connection – however convenient eliding it might feel. Below In Public rest several stones of similar size to the one clutched in the hand within the image, and the conflict a thousand miles away is propelled into Ikon’s second floor gallery. Neighbouring this tableau is It Stands Fallen, an installation resembling a shamiana (a popular Indian tent or awning used for public gatherings) which has collapsed. Forces which we cannot know have been exerted upon it, shredding its fabric and buckling its frame. Is it the result of a group of angry lawyers? Reporters? Or just representative of a kind of non-descript unrest, ascribed to no particular people but rather to the state of the human condition in general, Bangalore in particular? 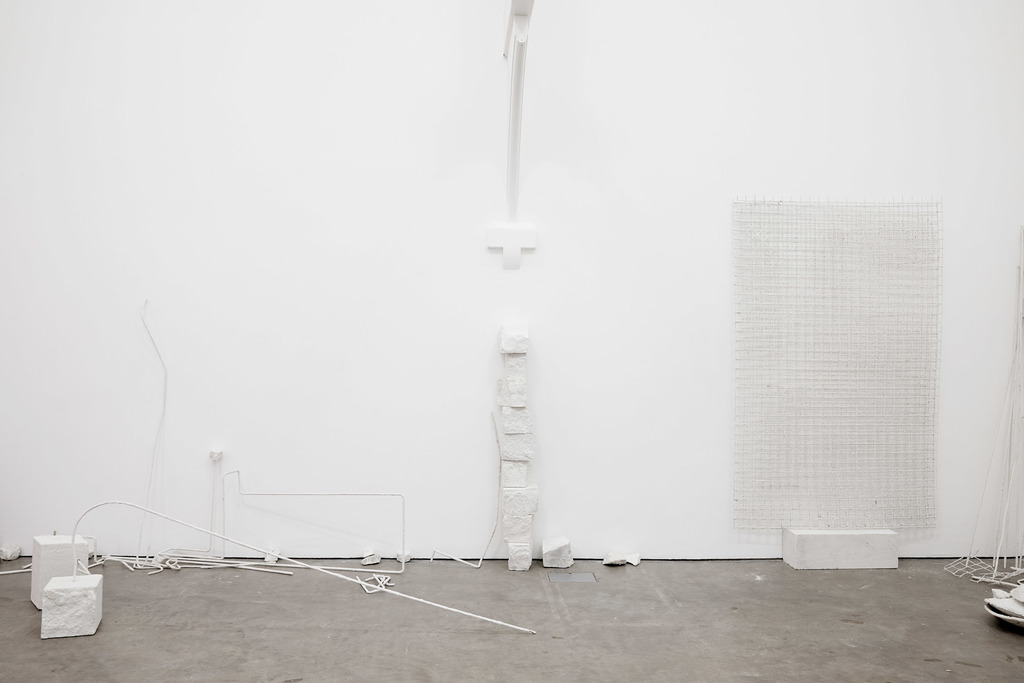 Apart from 'In Public', there is no direct representation of bodies; rather than rendering the work cold, it becomes infused with ghosts.

Bangalore, it is worth mentioning, has grown at a rate of knots. It is home to 8.5 million people, including Gowda herself, and embodies the result of rapid expansion and capitalism as applied to an economy without the built-in infrastructure to support much of either. Recent reports estimate that the city will become ‘unlivable’ to most of its inhabitants with a decade: the result of unchecked pollution, urbanisation and climate change. Ostensibly, though, Bangalore is thriving. Buildings are springing up, labour is cheap and abundant, and progress is measured in days rather than decades. There is so much to build, as the population grows further and people require houses, high-rises, offices and amenities. Much of Gowda’s exhibition concerns the physical materials used to conjure up these structures, and the skeletons of the assemblages themselves. In doing so, Gowda invokes the people who might construct and inhabit them – but her acknowledgement of these human beings remains allusive rather than explicit. Apart from In Public, there is no direct representation of bodies; rather than rendering the work cold, it becomes infused with ghosts. In Properties (set up in the gallery’s second room) people living and working are notable by their absence, invoked by the piece’s title. The work consists of a quintessentially Gowdian assembly of cement, bandlis (more of them later), mesh and metal rods. Here are the ingredients, so to speak, to make a home. The sparseness of apparatus, coupled with the white colour ascribed to each object so that they blend in with the walls of the gallery itself, implies a kind of meta-space in which we might be able to confront the physical reality of construction without the interference of the messy emotional aspects of labour and living. Boiled down to its constituent parts, we cannot know whether we’re looking at something yet to be finished, or dilapidated. Which way is the tide turning? 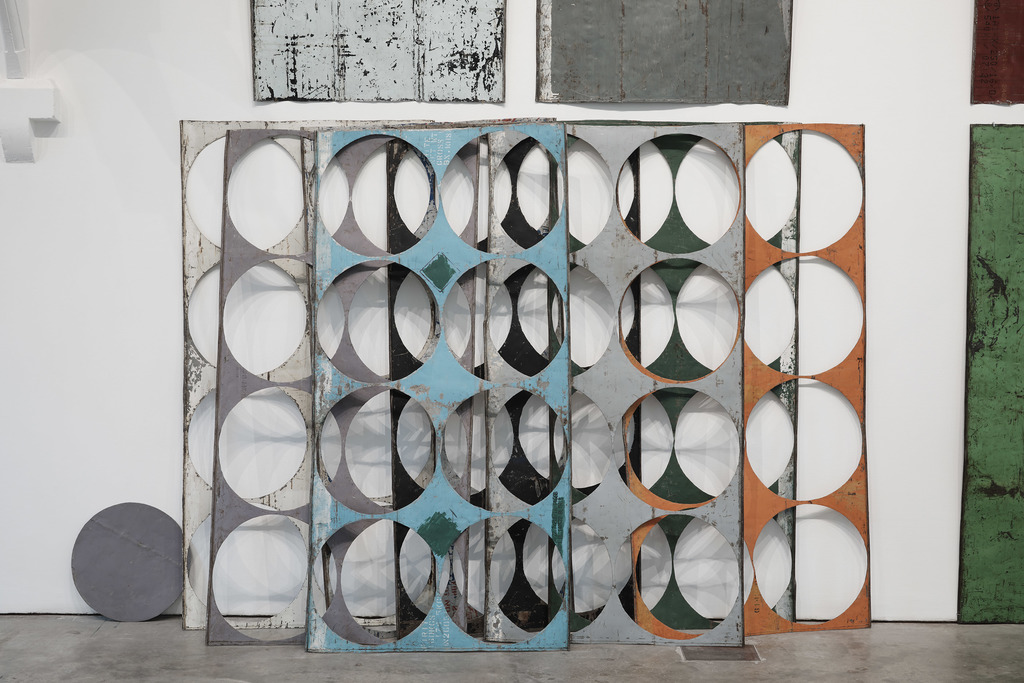 You can’t take the human out of the man-made, or from the city. It is built for and by him, for better or for worse.

Threads join in What Yet Remains, the exhibition’s third and final room. Sheets of metal stand against the far wall, bowls made from circles incised from them arranged on the floor beneath. These are bandlis, hammered into shape by hand from material excised from oil-drums rolled flat. They are the bricks and mortar of – well, bricks and mortar. Bandlis are used on construction sites throughout India to carry concrete slurry, sand and a myriad other materials besides. Whether or not each was made to be used exclusively by a particular worker, each was made by a particular worker. The collision of the hand-made and the industrial, in What Yet Remains, sees the kind of circularity explored in In Public expounded and interrogated. Building is inherently teleological; a certain series of processes are undertaken to produce a finite end. These bandlis, however, have taken a much less linear course. Say they build a warehouse used to store oil drums, the drums are flattened to make bandlis, which build a warehouse, and so forth. These objects come to constitute the very units of labour, tied to the body on whose scale they are made. Man and tool come to figure one for the other, interchangeable and flattened. But - just as a worker is an individual, physically and experientially, so too are the bowls. Each is covered in the traces of another life – paint from their parent drum, scratches from the work of last month’s project. When bodies are not rendered but merely insinuated, their notional presence throws the objects they interact with into a new light. You can’t take the human out of the man-made, or from the city. It is built for and by him, for better or for worse. Walking through Bangalore in Birmingham, we come to populate the sketch of the metropolis Gowda has transposed from East to West. It doesn’t feel so far away. 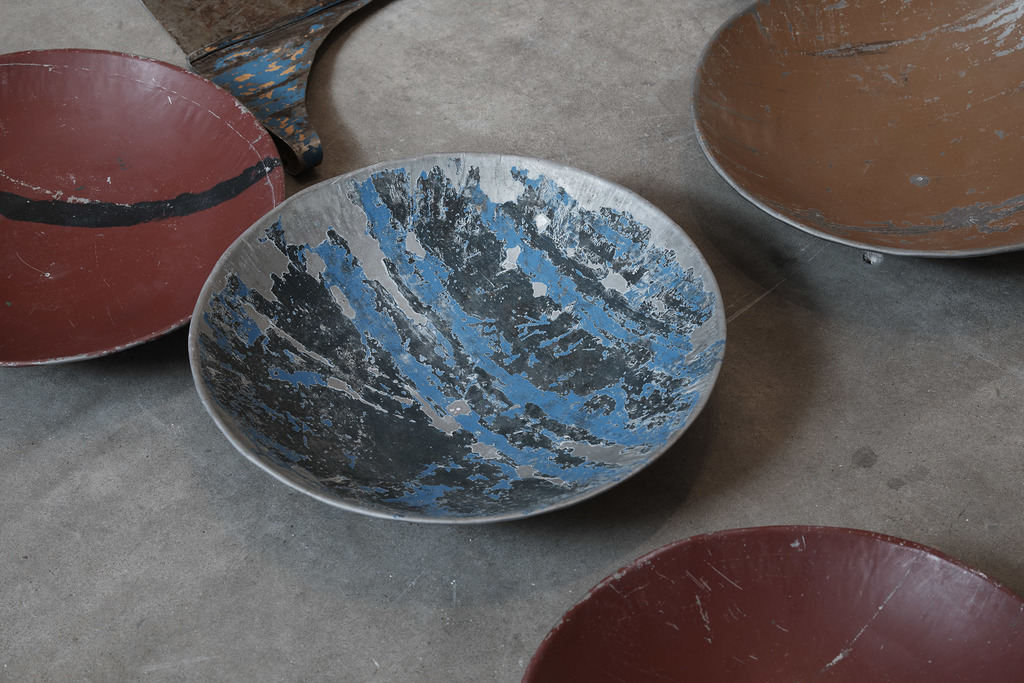