Think ballet, think swans & nutcrackers; think Tchaikovsky’s epic orchestral scores; think classic Degas-style girls, beautifully poised in stiff, tulle tutus and pink satin slippers. Culturally, such images and stereotypes of classical dance continue to endure (think Darren Aranofsky’s Black Swan, an exercise in bolstering these clichés if ever there was one) despite the enormous body of contemporary ballet that has proliferated across recent decades, and that has worked to address some of the more pernicious assumptions within the industry: namely, the ideals entrenched in those ballet companies which are still filled with very thin, very white, very young women, almost crippling themselves night after night by dancing en pointe. Which is precisely why Ballet Rambert’s production of Ghost Dances was so refreshing.

There exist ballet companies which are still filled with very thin, very white, very young women, almost crippling themselves night after night by dancing en pointe. Which is precisely why Ballet Rambert’s production of Ghost Dances was so refreshing. 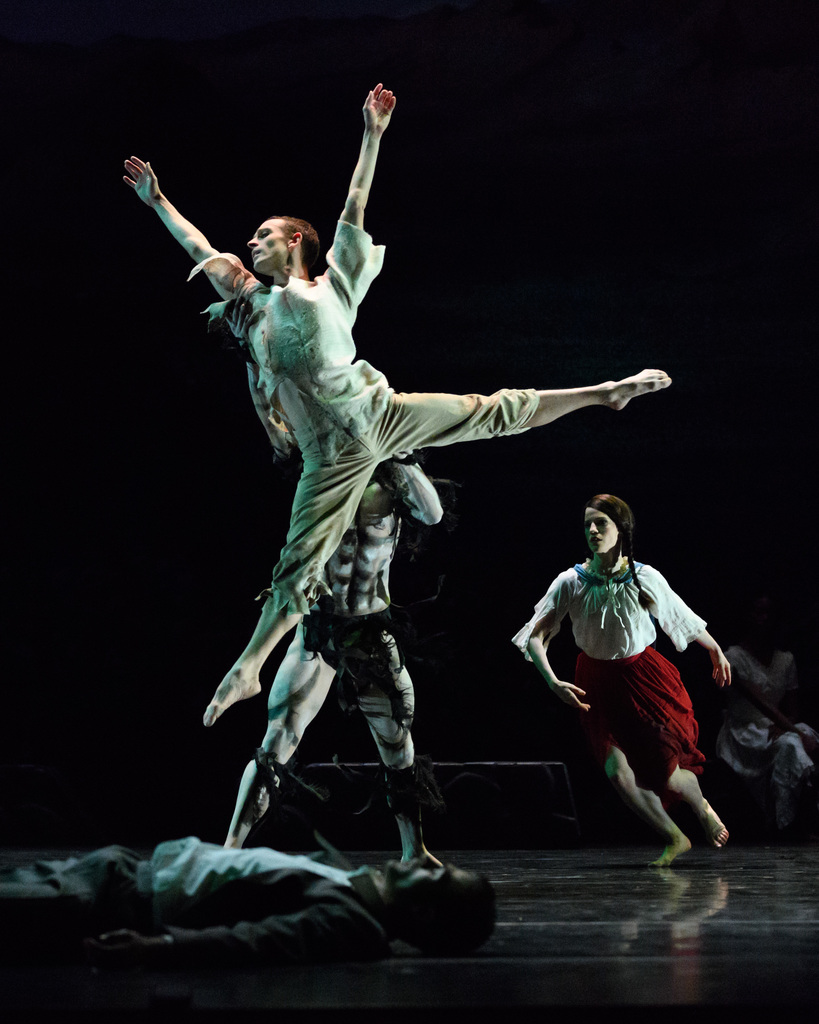 A performance in three parts, Ghost Dances is comprised of three different ballets, each one the work of a different choreographer: The days run away like wild horses, by Aletta Collins; The 3 Dancers, by Didy Veldman; and Christopher Bruce’s celebrated Ghost Dances, brilliantly resuscitated after sixteen years off stage. It’s a slightly off kilter trinity, and hard to detect a common theme, yet an abstract sense of physical balance and rhythmic harmony does weave its away across the entire performance: choreographically, each of the ballets perform an illusionistic image of weightlessness, exploiting the kind of contortionist, near-impossibilities that only the most skilled dancers can achieve with grace, flow, and breathtaking beauty. Yet, perhaps most importantly, each production works hard to address aforementioned balletic stereotypes. With a multi-ethnic cast, more representative than in most ballets seen on western stages today (this is still a problem that large ballet companies need to address) the music and narratives of these pieces have been borrowed from traditional, folkloric cultures around the world. Additionally - and notably - pink pointe shoes were entirely absent from the all of the performances, establishing an equality between the male and the female dancers, who performed potent versions of gender fluidity (in Collins’s piece, men dressed as women and vice versa) or androgyny (all of the male and female dancers wore identical, non-gendered costumes for Veldman’s dance).

Alongside the keenly anticipated revival of Ghost Dances, Rambert premiered a new piece - The days run away like wild horses – on 16 May 2017, created by choreographer Aletta Collins. This new work is a musing on mundanity, performing everyday routines, from shopping to sport to sex. All of the action takes place in a single, sparsely furnished room, bodies moving in and out, as their routines gradually begin to break down, like a needle stuck in a faulty record groove, repeating the same fragment incessantly, haltingly, without progression, but with fantastic, rhythmic distinction: Collins’s dance was an incredible example of the human body simulating the precise, programmed movements of automata. Eventually, the walls of the set fall away, and all of the dancers combine onto the stage, each dressed in an identical, long, purple dress, which works to collapse all kinds of difference, as the dancers move together irrespective of race, gender and age, suggesting a sense of inherent sameness (although it is left to the viewer to decide whether this expresses a glorious utopian ideal, or expounds a criticism of the mechanical routines performed under capitalist production). 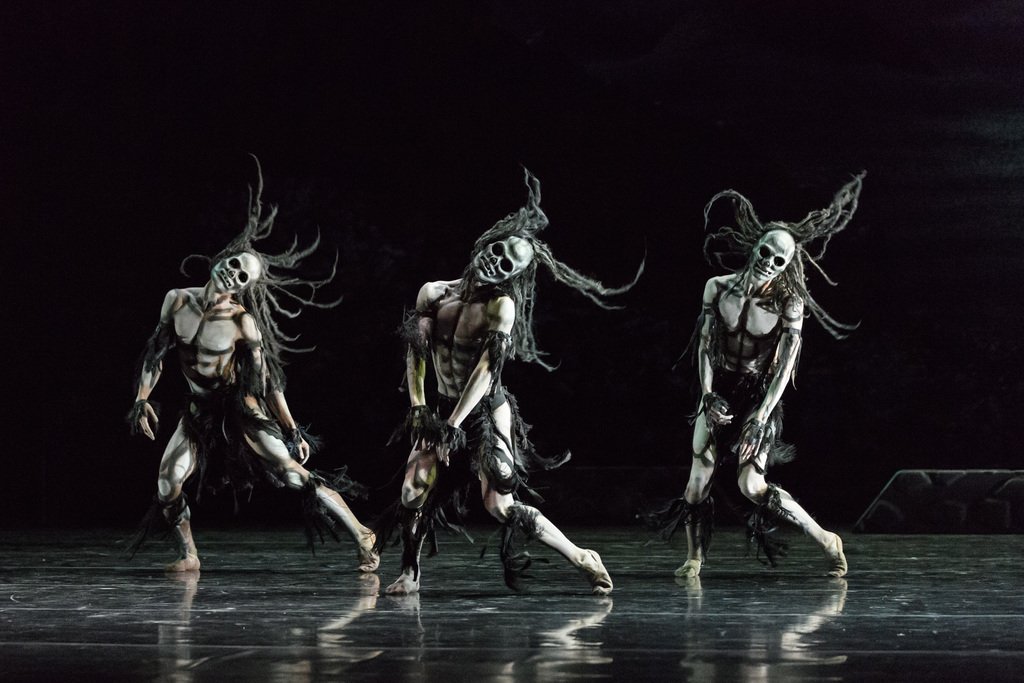 Collins’s piece is followed by The 3 Dancers, which Didy Veldman has choreographed around Picasso’s 1925 painting of the same name. Relying on a minimal, monochrome palette for set-design, lighting, and costume alike, Veldmen’s cerebral dance eschews narrative, aiming instead to physicalise the fragmented perspective of Picasso’s Cubist forms. Large shards of perspex penetrate the scene of the dance at irregular intervals, while two pairs of trios perform a series of hypnotic movements to Elena Kats-Chernin’s ominous, string-heavy score. At its core, a compelling marionette sequence takes place, in which one dancer appears to control the movements of another, pulling on a complex nexus of invisible strings. The precision with which the dancers enact the episode makes for a hypnotically convincing performance, and one which again brings to mind the notion of automata and physical manipulation.

If the control of bodies is a common theme throughout the acts, then Ghost Dances - the performance finale - surely contains the most powerful evocation, conceptually if not always visually. Bruce’s seminal dance, first staged in 1981, was developed in response to the brutal political climate of South and Central America, where violent oppression had taken hold in a number of politically charged countries, from the regime of General Pinochet in Chile (the predominant basis for the dance) to that of General Noriega in Panama.

The ballet centres around three ghosts, clad only in black and white body paint and rags, their faces obscured by dreadlocked masks. Their movements are by no means the most tricksy or balletically complex, but they are all the more compelling for their chilling strangeness. The dance opens in the cool, blue light of early dawn, a mountainous backdrop just visible, as the sound of wind whistles around the stage. Into this dreamlike atmosphere the ghosts appear, performing stalled motifs of broken bodies, where heads loll, arms swing at the elbow joints like a faulty marionette (and perhaps the ghosts resemble the foot soldiers of tyranny, the puppets of the state, rather than the state itself), and flexed feet induce a heavy, dragging motion across the stage. As the sound of Inti Ilimani’s pan pipes grows in the gathering light, these malfunctioning movements give way to sudden strong and decisive manoeuvres: bold barrel leaps launch the ghosts exuberantly across the space, or, as at one particularly sinister moment, a sharp turn of the head leaves them staring out into the audience, through the dead eyes of their frightening masks.

Würtz allows her body to take up as much physical space as she can, staunchly asserting herself, standing strong in the face of her adversaries, her feet planted flat on the ground, as she holds out her arms, in an expression that speaks of dejection, desperation and vulnerability, encapsulating the desire to reach out and to protect, but also to be reached out towards and to be protected. 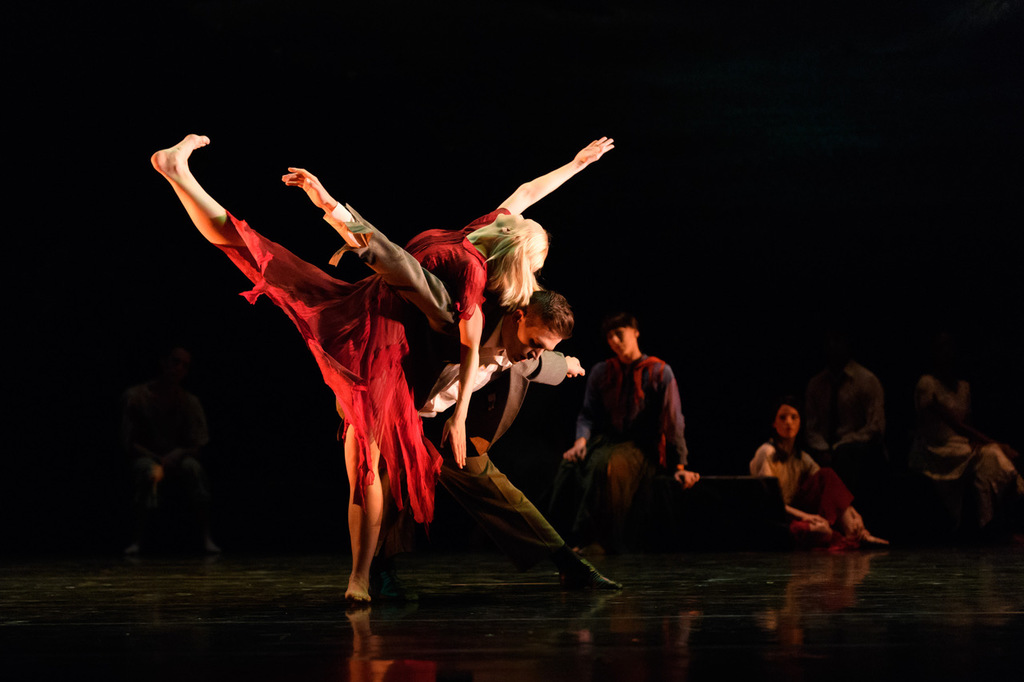 Yet it is Simone Damberg Würtz’s performance that steals the show for me, in her poignant depiction of the ‘woman in the red dress’. In stark contrast to disjointed movements of the strange spectres, Würtz’s tragic figure combines graceful strength with vulnerability, as she portrays the character of woman whose husband is savagely slaughtered at the hands of the ghosts. One recurring motif sees Würtz landing in a deep plié in second position, her legs wide and bent at the knee, her arms outstretched towards the audience. So much beauty is contained in this gesture, which is itself an inversion of the kinds of beauty we are used to seeing on the ballet stage: Würtz allows her body to take up as much physical space as she can, staunchly asserting herself, standing strong in the face of her adversaries, her feet planted flat on the ground, as she holds out her arms, in an expression that speaks of dejection, desperation and vulnerability, encapsulating the desire to reach out and to protect, but also to be reached out towards and to be protected.

I first saw Ghost Dances in 2007, on a small TV in dance class. This was in the days before huge, high-definition, flat screens were all-pervasive, and the small box was mounted high on a wall, making the dancers and all of the action of the ballet seem terribly far away: which resonates with the piece itself. With its single backdrop, framing the dancers within a mountainous, South American landscape, tangled with the soft sound of traditional pan-pipes and the evocative use of folk dress, I found Ghost Dances rapturous, then as now, possessing a compelling power to transport the viewer to distant corners of the globe. Yet, the piece felt foreign to me in more ways than one: Ghost Dances reminded me, in the words of L. P. Hartley, that “the past is a foreign country; they do things differently there.” Bruce’s dance could have been set at any point throughout the 1970s, or even at the time that it was first staged (Pinochet’s regime lasted from 1973 until 1990). Yet, watching the dance in 2007, I had a sense of an enormous political gulf, which seemed to place the events of less than twenty years previous in an alien past. True, this was already six years after 9/11, and four years into the UK’s involvement in Iraq: hardly a bastion of peacetime. And yet, in spite of this, I remember the profound sensation that the events depicted in Ghost Dances seemed inconceivable in those post millennial years. Surely we had ‘progressed’ to a point at which the kinds of political oppression that had taken place in the 1970s and 80s in Central and South America were no longer possible, at least in such a Westernised and progressive economic powerhouse as Chile. Watching Bruce’s work felt to me like watching a dramatisation of the Russian Revolution or WWII: this was something of profound significance, but something which had ended. Ghost Dances represented an important contribution to collective memory, a monument put in place to ensure that future generations eschew the mistakes of the past. 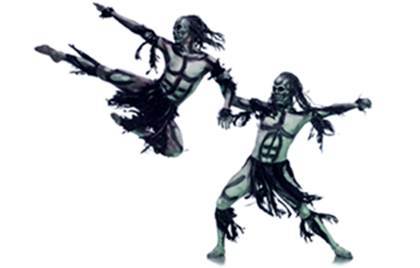 The sensation of leaving the performance of Ghost Dances in June 2017, however, left something of a bitter taste in the mouth. No longer simply memorialising, the dance seemed suddenly to be issuing an urgent warning, a loud clarion call, as the United States readies itself for the erection of a barbed-wire-topped-wall across the border of Mexico.

Perhaps it is surprising that ballet should be harnessed to respond to political events (and indeed, Ghost Dances is not typical in this respect) yet Bruce shows that it might be the perfect art form with which to tell the story of this kind of oppression, because it forces a confrontation with falling bodies, with the physicality of tyranny. Yet, if the ballet reminds us of the human capacity for violence, it does so at the same time that it foregrounds our tendency towards art, beauty, and grace. I am left thinking about pain, about the fact that ballet dancers recognise physical suffering as an integral part of their praxis. In order to endure this arduous exertion, these performers learn to isolate good pain from bad, and recognising the difference between the two is crucial. Here, in Ghost Dances, Bruce has staged the distinction between good pain and bad, using the one to tell the story of the other with exceptional poignancy. Zooming out from Bruce’s choreography, we might notice that the entire performance of Ghost Dances, all three of the compositions, seek to explore the possibilities of political commentary, be that in relation to race, gender, or sexuality, because with ballet, the political can cease to be an abstract idea. As an art form, ballet reminds us of our physical sociality and of the fact that, at its core, politics must always be about a navigation of the human body, amongst others, day by day, in a spectrum of spaces and times.

Rambert’s Ghost Dances is on tour throughout the UK until 17th November 2017; follow Simone’s journey at @ms_stackhouse and @rambertdance.