Everything Everywhere: the Multiverse Epidemic

We’re living in the Darkest Timeline: depending on which version of history you’re living in, the idea of multiple timelines either snowballed following a 2011 episode of Dan (Rick and Morty) Harmon's Community, or in 1952 with Erwin Shrödinger’s multi-verse theory. Either way, the phrase darkest timeline really spread like wildfire in 2016. This was the year of Trump’s presidency, Brexit, the death of David Bowie and well, quite a few wildfires – a time when the absurdity of our present era crescendoed. 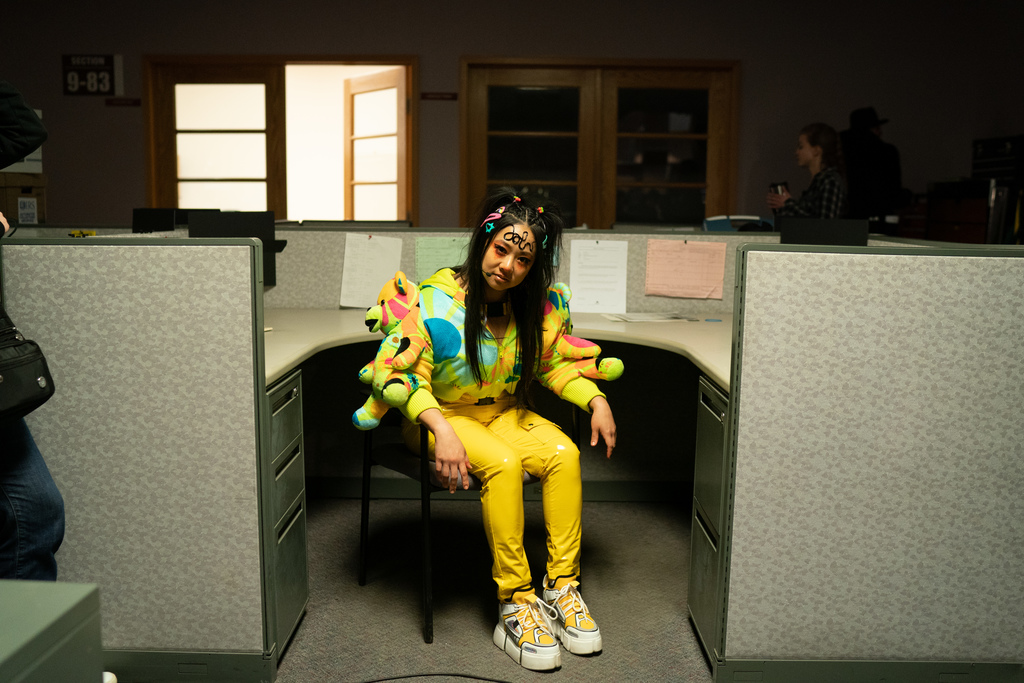 It was also the year (I’d say uncoincidentally) that the duo of film directors and writers Daniel Kwan and Daniel Scheinert (known as Daniels or the Daniels, who famously directed Daniel Radcliffe as a flatulent corpse) wrote the script for Everything Everywhere All at Once - which dabbles in a few dark timelines of its own. The film, just released, has arrived in an era when you can’t move for multiverses, metaverses, spiderverses or Godzilla versus Kongs.

"the absurdity of our present era crescendoed" 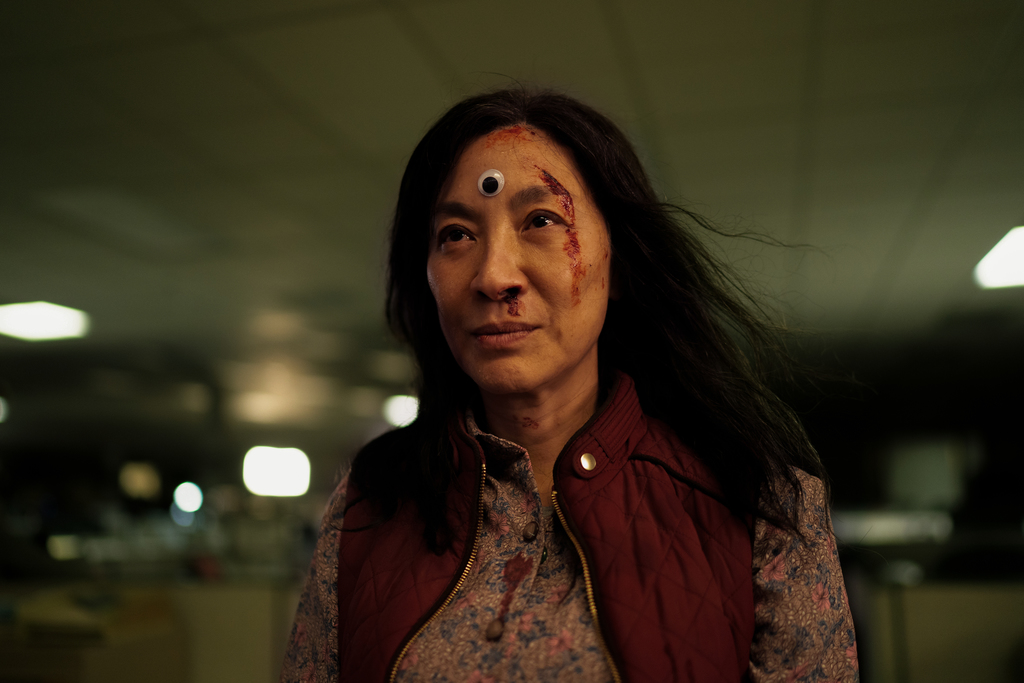 Needless to say, this cloak-and-swagger, multi-malarky is big business, and in fact, Everything Everywhere All at Once (henceforward EEAAO) is screening in cinemas concurrently with Marvel’s Doctor Strange in the Multiverse of Madness. A few weeks ago, EEAAO star Jamie Lee Curtis started an internet feud when she said that EEAAO ‘out marvels any Marvel movie they put out there’, writing on Instagram that ‘our little MOVIE’ is ‘CRUSHING the box office’. As of May 21, Curtis can feel extra vindicated, because EEAAO has become A24’s highest-grossing hit ever, having surpassed $50 million in revenue.

"bigger problems than laundry and taxes" 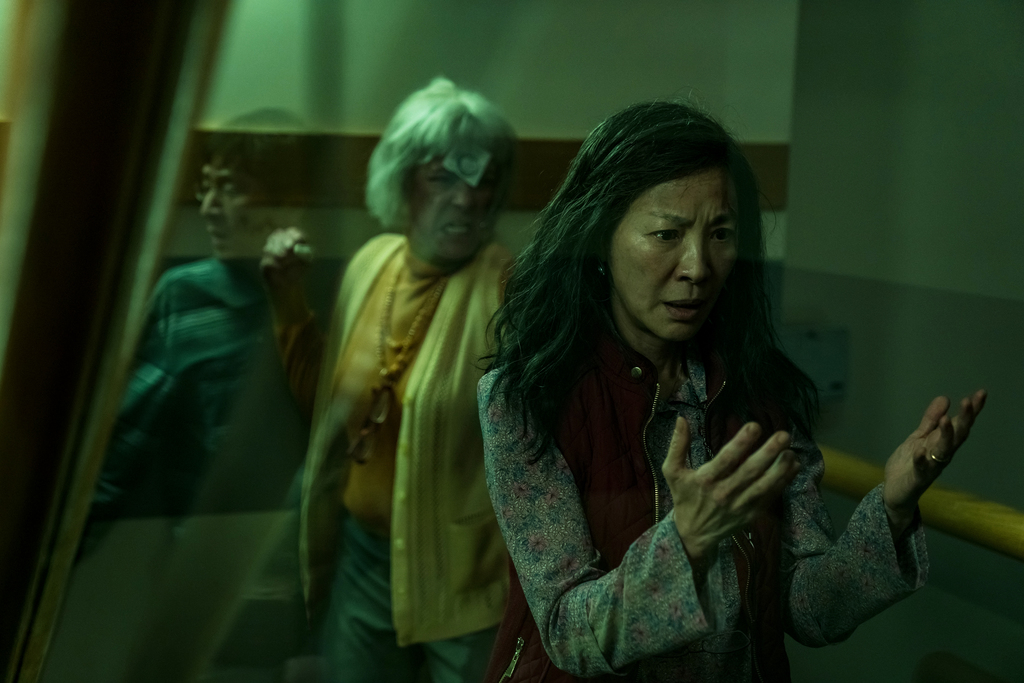 Not bad for an indie film, but still, a drop in the ocean compared do Dr Strange 2 which has grossed over half a billion dollars – which, for the likes of Marvel, is pretty bad, apparently. In any case, what are Daniels getting right that others are getting wrong? And what might EEAAO tell us about the current multiverse epidemic? 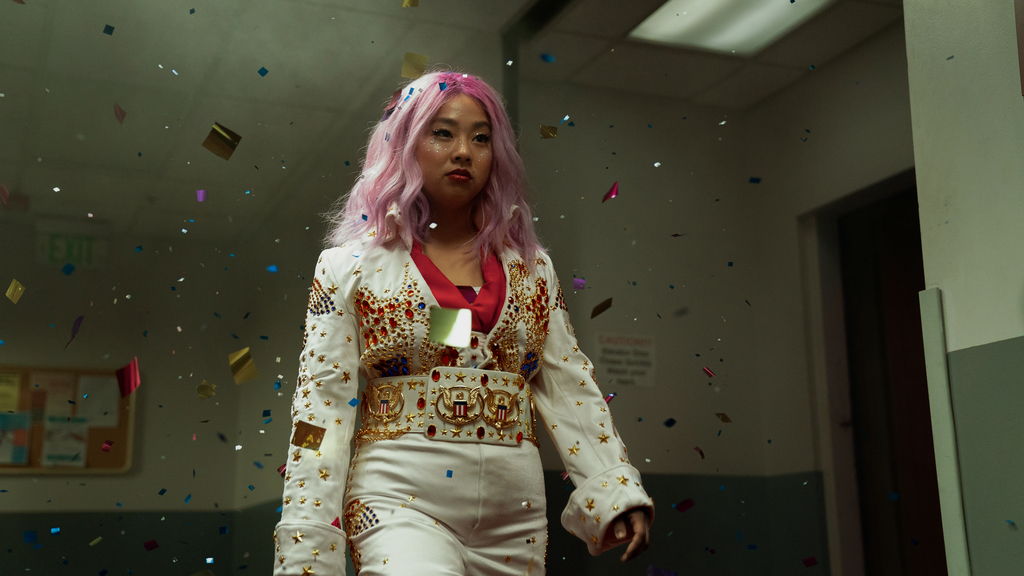 We meet Chinese-American Evelyn (Michelle Yeoh) putting out fires on multiple fronts. Grappling with demanding customers in the shabby laundromat she co-owns with her feckless husband Waymond (Ke Huy Quan) and mediating old-fashioned, judgey grandpa Gong Gong’s (James Hong’s) introduction to her daughter Joy’s (Stephanie Hsu’s) white girlfriend, Evelyn’s plate-spinning comes crashing down when confronted by angry tax officer Deirde Beaubeirdra (Jamie Lee Curtis). Who knew karaoke machines aren’t tax-deductible? ‘From a stack of receipts, I can trace the ups and downs of your life,’ says the IRS agent. ‘And it does not look good.’ Evelyn has 24-hours to pay up, or else. Cue the ‘Alphaverse’ version of Waymond commandeering her husband’s body to inform her she’s got bigger problems than laundry and taxes. She could be the key to saving all reality – or should that be realities? 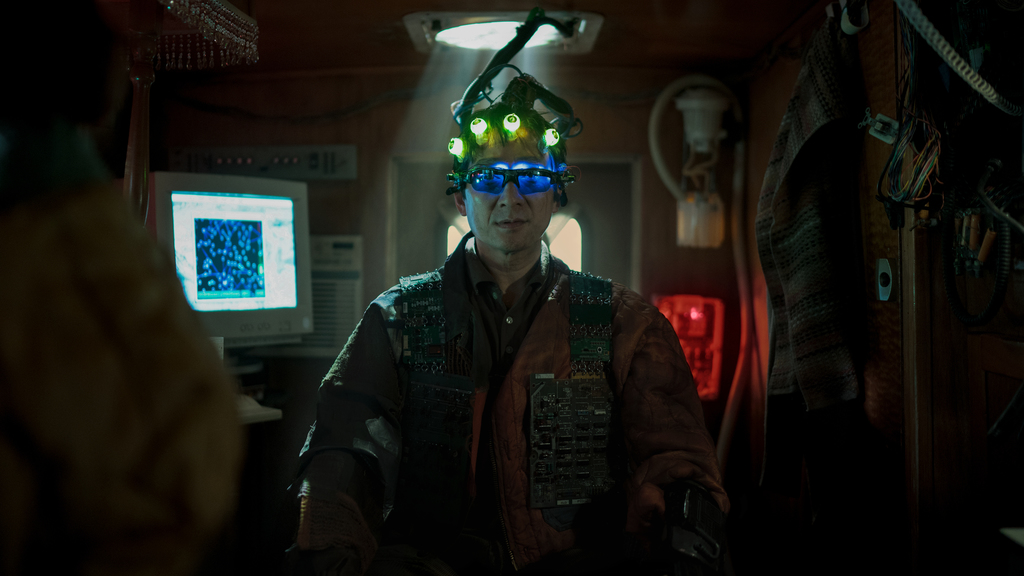 The Daniels have credited their cinematic style to the ‘weird algorithm’ that fed them strange YouTube videos, and indeed soon Evelyn is whisked through enough chaos to rival a five-minute scroll through the internet. As she finds herself ‘verse-jumping’ to a timeline where’s she’s a hibachi chef, another where she’s a film star, a universe where everyone has hot dogs for fingers and another one that’s Pixar’s Ratatouille but with raccoons – only to discover that her daughter Joy has put ‘everything on an everything bagel’ – somehow the Daniels mobilise all this multiplicity towards a unified feeling of alienation and disorientation. At least they do for the film’s first half. 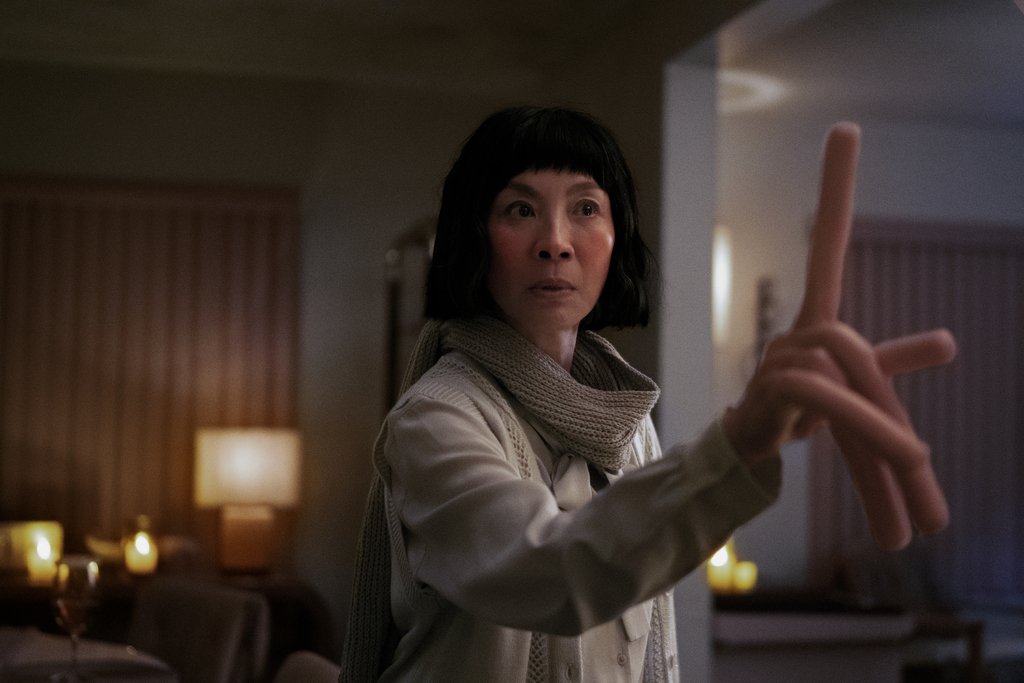 "the all-too-human anxiety about having just the one life"

While some see EEAAO as a product of the ‘contradictions and emotional whiplash’ of the internet, for me it works best as an immigrant horror story. Since the early days of the Gold Rush, the laundromat has been a significant site of Asian American exclusion, with many generations living under a single roof. Which means many mouths to feed. Forms to fill in. Demands to be met. And all in your second language. You might find yourself needing an extra timeline or two in order to make rent, as a rigged system rings out every last drop of capital from you. 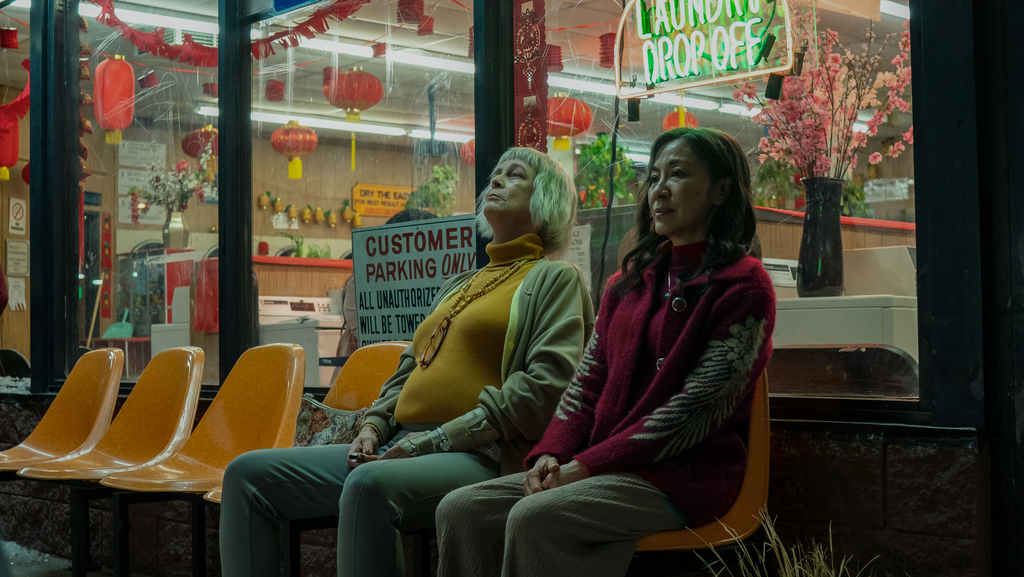 Indeed, the idea of the multiverse touches upon the all-too-human anxiety about having just the one life; instead, we’re sold the fantasy of ‘spare’ ones for when we inevitably mess up. Alpha Waymond puts it another way. ‘I’ve seen thousands of Evelyns, but never an Evelyn like you. You have so many goals you never finished, dreams you never followed’, he says. ‘You’re living the worst you’. It’s a phrase that echoes the new societal injunction: not simply to be happy but, as over five million posts on Instagram attest, to #liveyourbestlife. To do so, you’ll need not just a work-life balance, but a work-work-work-life balance, plus several more of you for social media.

"the new societal injunction: to #liveyourbestlife" 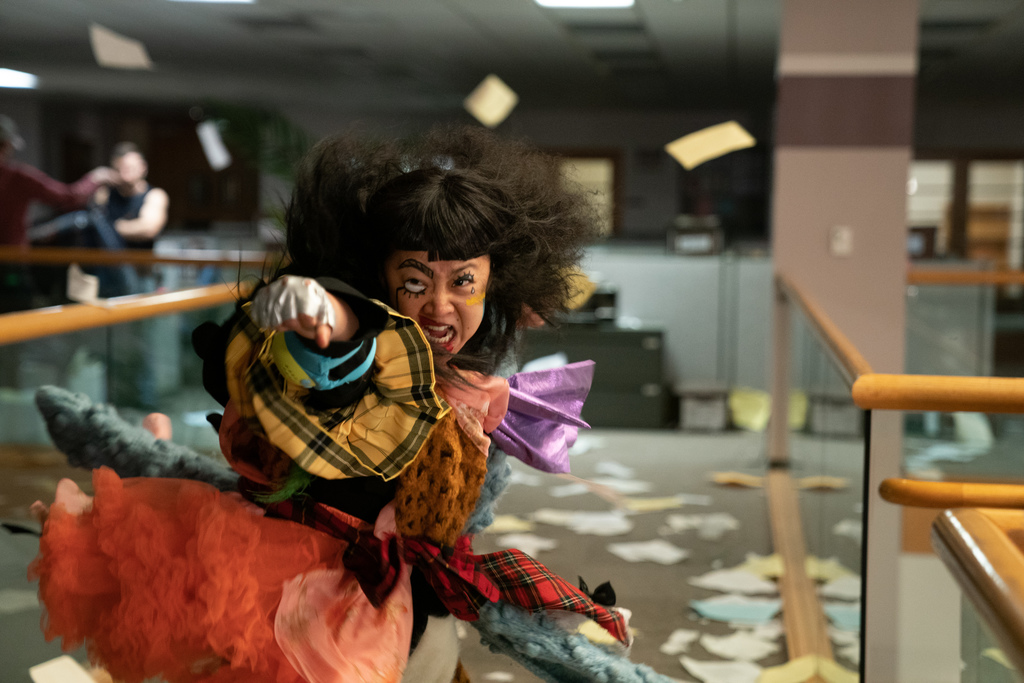 Far from a corporate cash-in on some CGI wizardry, the first half of EEAAO uses the multiverse as a metaphor for that schizoid feeling imposed by the everyday pressures of modern life. This is cinematic excess (jump-cut-wuxia-hot-dog-googly-eye-confetti) as an expression of overwhelm (important-email-school-run-running-late). While the film’s second half feels somewhat protracted and schmaltzy in its heavy-handed argument against nihilism in favour of finding value in love and family (awwwww), it does at least sum up the unavoidable problem with multiversal cinema: stories need consequences. 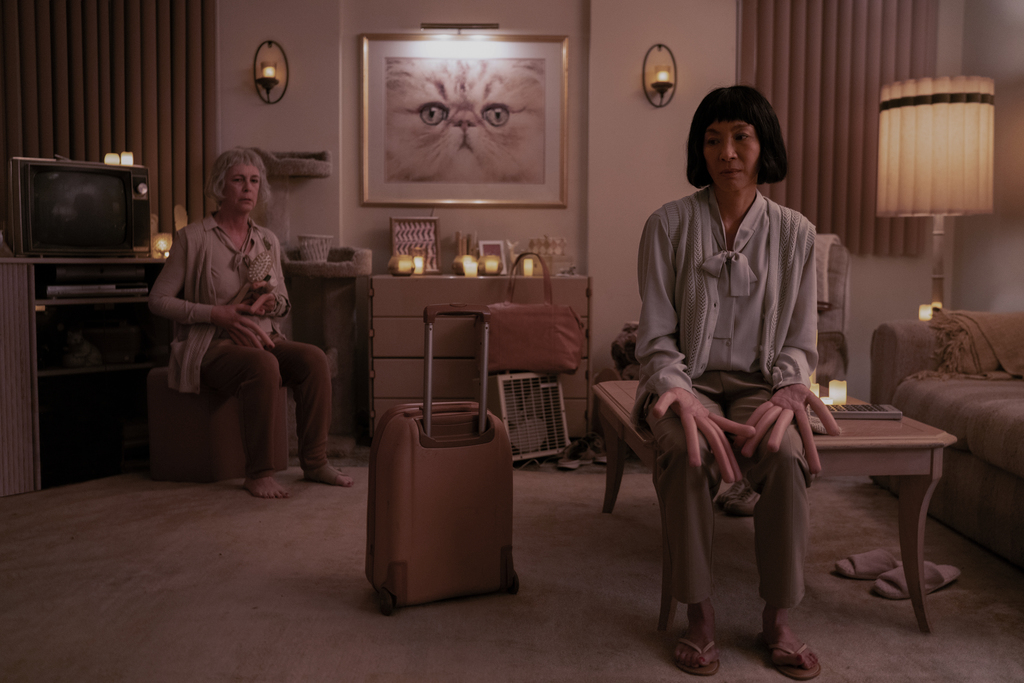 "cinematic excess as an expression of overwhelm"

Even as Evelyn expounds to her depressed daughter that she must choose to care about her family, we continue to toggle between parallel worlds, cancelling out whole sequences of activity, such that, ironically, nothing is actually at stake. They say you should never end a story ‘and then it was all a dream’. Well, it turns out you shouldn’t do it in the middle either. It goes back to the old childhood lore that you can’t wish for more wishes: if you could have everything, you’d end up desiring nothing. Rather (as Evelyn-as-mouthpiece will end up explaining) it’s finite choices and their consequences that make life meaningful. 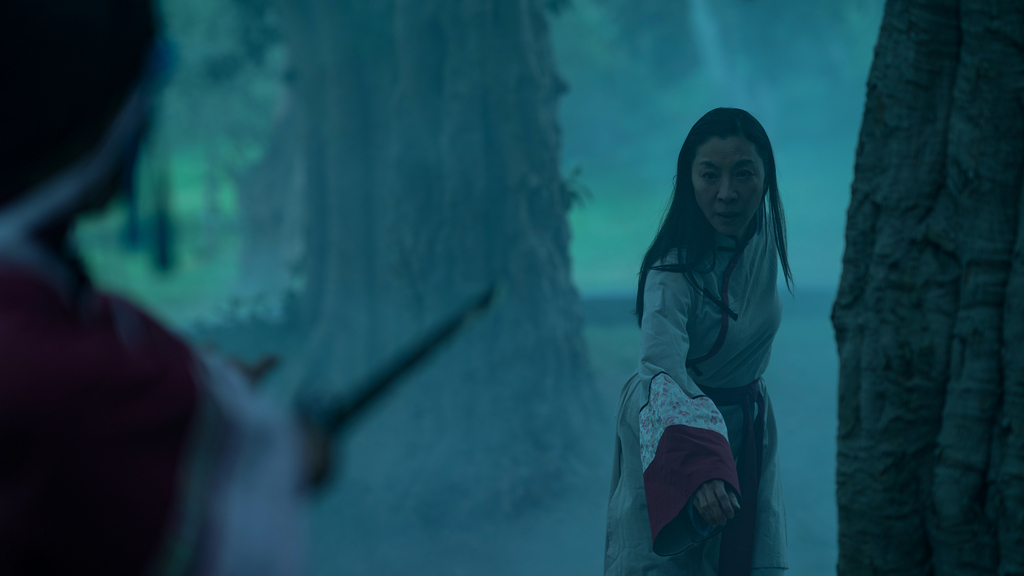 While school students seem to grasp this fiction lesson quite easily, president of Marvel Studios Kevin Feige seems to have unlearned it entirely for Phase 4 of the MCU, betting millions of dollars on a Sisyphean task: if anything can happen at any time, you’ll have to work all the harder to make audiences care – we like to take our Massive Spectacle with a dollop of Actual Narrative, thank you very much. Unless of course I’m wrong. In which case, we really are living in the darkest timeline.