On the wall facing you as you enter Frith Street gallery is night-time traffic on loop. Five lanes across and seen from above, the cars flow down and out of shot. This is Fiona Tan’s Vertical white. Behind you, on the opposing wall, hangs Vertical red. This time, it’s a hum of tail lights, endless traffic flowing towards the gallery ceiling and into the night. A soothing and impressionistic piano accompaniment mimics the brake light trails. Red balances white. Upflow answers downflow. These moving surfaces are at once dark and aglow, like moonlight through droplets on misted glass, ambient nocturnes for our times. 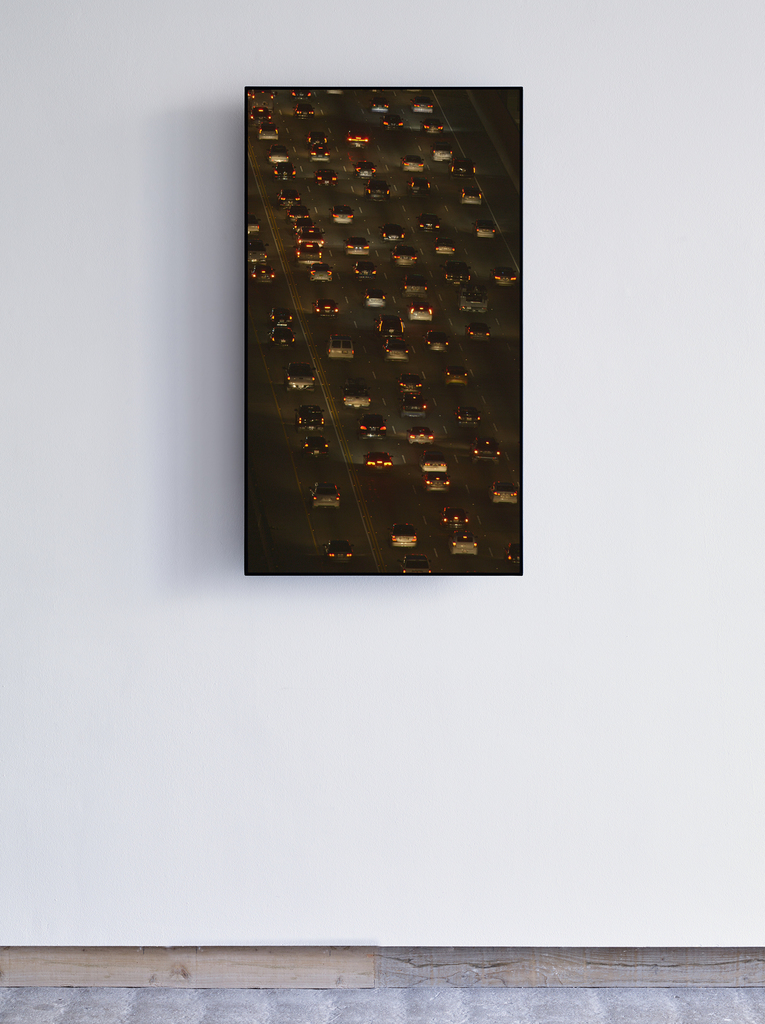 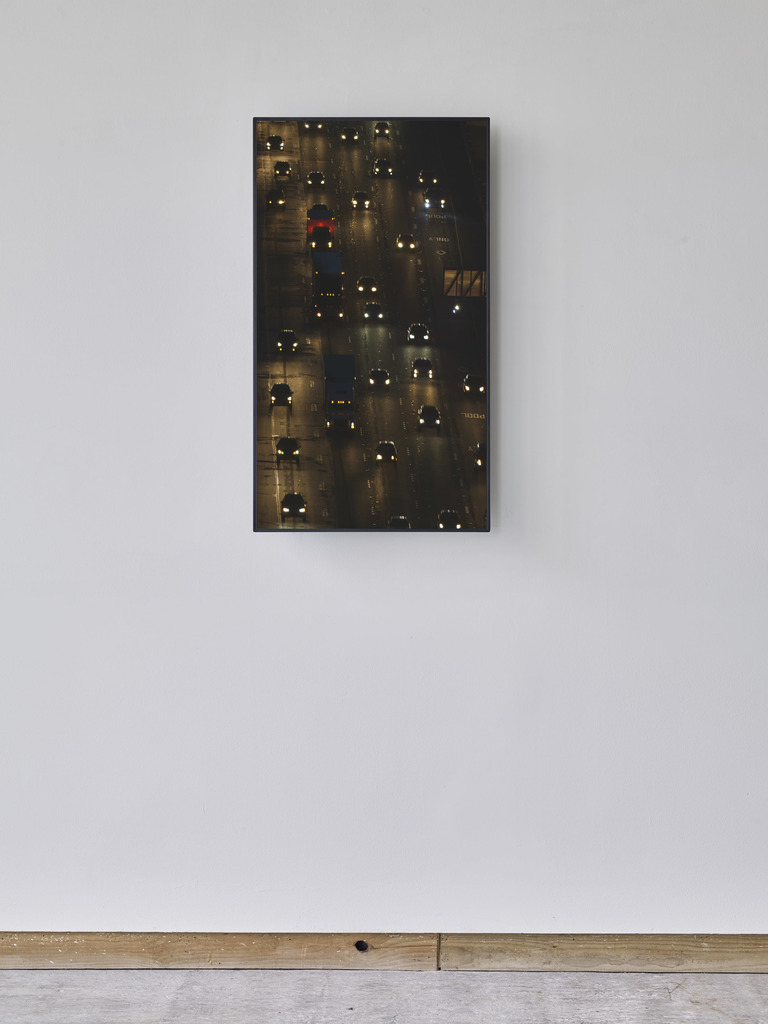 Hanging, as they are, in dialogue, I am reminded of Fiona Tan’s Rise and Fall, 2009: a video-diptych where water becomes a metaphor for time and memory in the lives of two women. In this earlier work, shots of Niagara Falls are interspersed with moments of intimacy — hands caressing bare skin, the application of make-up. In Vertical red and Vertical white, I find myself reaching for natural metaphors: the traffic ‘flows’ endlessly like Rise and Fall’s bodies of water. Likewise, Vertical wide, a third looped video of a highway at night, captures a veritable river. Shot from a more expansive vantage point, we see head- and tail- lights streaming alongside each other, cutting through the city. Here, we’re permitted a sense of distance. In the frame’s top-left corner, the divided highway tapers to a vanishing point, the narrow neck of an hourglass whose sand trickles both ways.

The traffic in Los Angeles is notorious. Tan’s Vertical pieces are remarkable not only for transmuting the urban to the natural, but for making a highly stressful situation into an exercise in self-soothing. It is difficult to imagine being in any one of these cars: rather, when occasionally a car merges it is a gesture of anonymity, the feeling of having slipped off into the night. These are freeways in deep time. 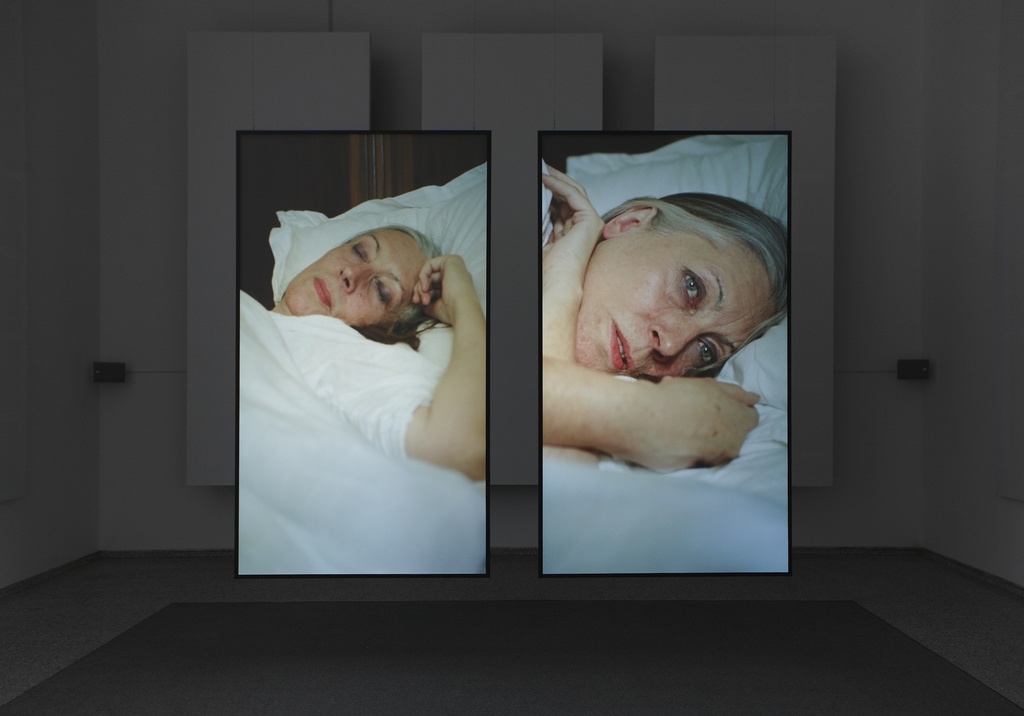 The three video works exist on a metaphorical plane, an axis on which it is easy to turn from ‘motorway’ to ‘river’ to ‘time’, simply by watching the way they ‘flow’. In contrast, Elsewhere – the exhibition’s central and eponymous work – seems to exist on a metonymic plane: that is, it gestures towards something specific and longs to reach it. What we are being asked to imagine is a utopia. As the 16-minute film begins, we are overlooking the skyscrapers of LA from somewhere up in its hills. A blur of morning fog. A bird flits under a grey cloud. ‘Typically you arrive after a long and arduous journey,’ announces a woman’s voice in an easy-going tone that would be well-suited to sleeping aid hypnosis. ‘You awake one morning to a completely new life.’ The images dissolve one into the next, all with a similar proximity to the city in the distance. We progress gradually from morning to night in a succession of establishing shots that resist closing in on a single scene. While a utopian society is emerging in the voice-over, ‘dissolve’ remains the operative word for Tan’s visuals.

When a jet takes off, it has no symbolic function. An aeroplane taking off above LA is only an aeroplane taking off above LA – but, in the perfect world being described, there would be no need to come and go. You are already where you want to be, and life is one long holiday: ‘The concept of work hardly exists any more, for it is in any case voluntary’, intones the voice. The images are at odds with their descriptions, but fall short of being dissonant. We ache for them to meet. 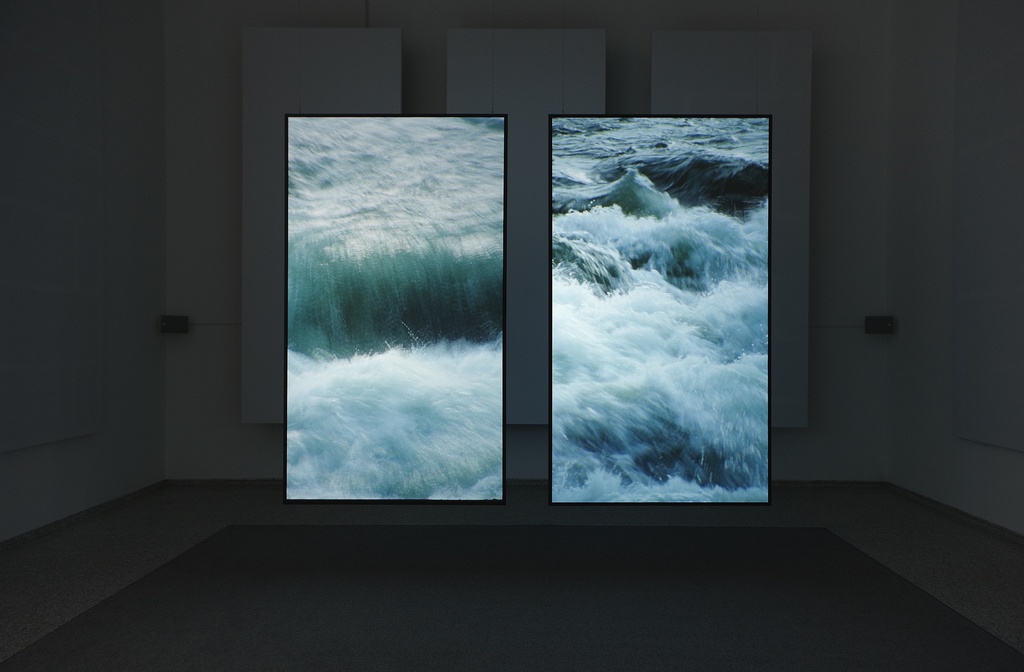 One way in which the visuals and voice-over do touch is via the phrase ‘City of Angels’. We could imagine Tan’s utopia as a heavenly afterlife, but that’s not quite right either. That would be ironic, whereas the tone of the piece is earnest. It’s a sincere attempt to imagine a perfect world, in which ‘conflicts are dealt with before they can escalate’ and ‘peace is a simple and wholesome reality’. For all its sincerity, I am left with my own suspicion — which is perhaps the point. We are so accustomed to utopias descending into dystopias that this hovering feels like unfinished business.

Utopia has long been associated with impossibility. In 1516, Thomas More published a work of fiction and socio-political satire entitled Utopia that described an island where there was no private property. More’s fictional society had a welfare state with free hospitals; euthanasia was permissible; divorce was easy; women could be priests. The society had many more benevolent facets besides, but the book presented a kind of puzzle. Why had More written it? The specifics all pointed towards a critique of 16th century Catholicism — and yet More remained a devout member of the church. His invented world was full of satirical place names, but none was more telling than the title ‘utopia’ itself. The Greek prefix ‘ou-’ means ‘not’; ‘topos’ means ‘place’. Utopia, ‘nowhere’. 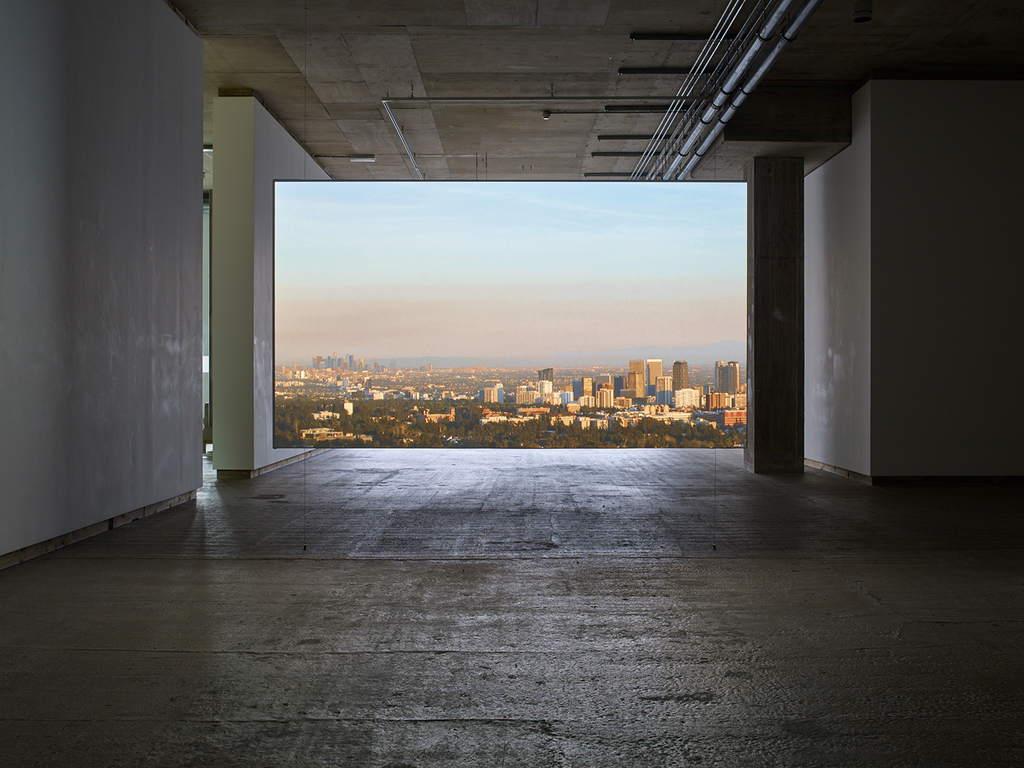 More’s no-place is answered in Tan’s Elsewhere – less impossible, still out of reach. Tan has presented us with her own puzzle. Unlike More, her reasons for describing her utopia are sympathetic and readily available. After all, why not? In a society inclined towards dystopian visions, there is value inherent in simply trying to imagine a better world. What emerges, however, is the flimsiness of such an objective: however grand our plans, we cannot push beyond the broad strokes of concepts — ‘peace’, equality, freedom — to the details of a world which would incorporate them. They say that you should never bring up a problem without suggesting a solution, and perhaps the inverse is true too. Don’t propose an idyll if you haven’t sketched out a waste-disposal programme to keep it clean.

The footage in Elsewhere is a personal archive, filmed directly from Tan’s former studio. When formulating an ideal world, start from where you find yourself; utopia might be less a place than a lens. This is stunning footage of LA, but crucially the sprawling city remains at a distance – the only place it could be. Elsewhere, where else? As the video dissolves to a nightscape, I watch lights glint like fractious sun on the sea, and feel at ease. Soothing meets suspicion. Everything looks great from up here – even pollution and endlessly streaming traffic is beautiful when you’re not choking on the fumes. Close-enough-to-almost-taste-it might be better than tasting it, after all. 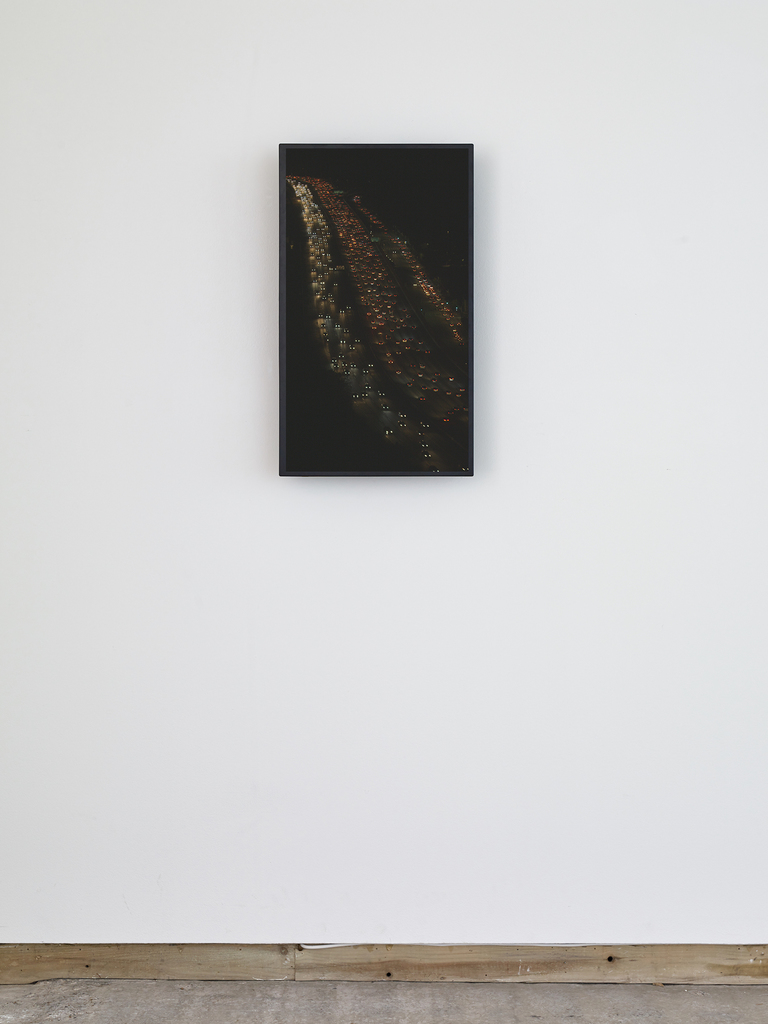