The problem with life is that we see our own behind-the-scenes while watching everyone else’s highlights reel. And the problem is only compounded for tomorrow’s adults, who are tasked with constantly curating their highlights for the world on social media, whilst scrolling through this intoxicating flotsam to the point of obsession as a way of anaesthetising themselves against the whole, tiresome struggle.

Superlatives are often a guiding force when it comes to the conflicts affecting teenagers in films — see: Oh My God, The Most Beautiful Boy I Have Ever Seen Ever, or The Coolest, Most Life-Ruiningly Popular Girl in School — and while Kayla does long for a boyfriend, and to belong to a clique, what she really wants is far more existential: to become the person she’s promised herself to be. 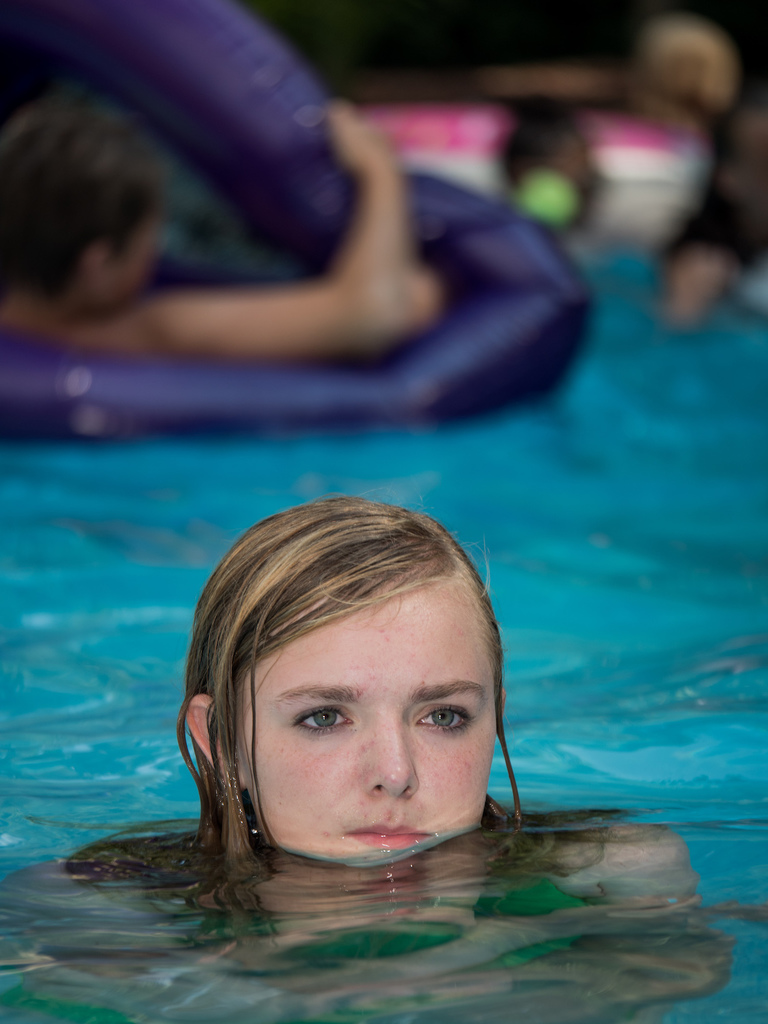 The scene that encapsulates this crisis in ‘Eighth Grade’ is when thirteen-year-old Kayla stands on the brink of Kennedy’s birthday pool party. The camera holds behind Kayla: quiet, invisible and exposed in her one-piece swimming suit, hands crossed over her stomach to hold in the butterflies as she looks through the patio doors and takes a moment to compose herself. As a fledgling vlogger in the self-help confessional mode (‘You just need to face your fears’, etc.), here marks the moment when she must get down off her soapbox and live by her own advice — this is underscored by the mise-en-scène with outsider Kayla high up on the patio, as if holed up in a tower, while down below pubescent pool carnage reigns supreme. The camera swoops through the scene, with the delicious excess of slo-mo and EDM, like Harmony Korine’s ‘Spring Breakers’ — the PG 13 cut — taking in neon swimsuits, train track braces instead of grillz, Super Soakers instead of guns, and fizzy pop instead of booze. Up here you’re all alone and it’s all your fault; over there, people are living life to the fullest. But you could have that, too. This is your chance to make a splash. If only you could- Take a deep breath.

You see, Kayla is on another threshold: ‘Eighth Grade’ follows her during the final week of middle school, as she prepares for the gigantic leap to high school. This new school promises another chance for her to grow, a clean slate from which she can establish herself as the outgoing, confident person she wants to be, rather than the awkward and shy girl that her middle school has cast her as — literally voting her ‘Most Quiet’, in the end of school Superlative awards. Indeed, superlatives are often a guiding force when it comes to the conflicts affecting teenagers in films — see: Oh My God, The Most Beautiful Boy I Have Ever Seen Ever, or The Coolest, Most Life-Ruiningly Popular Girl in School — and while Kayla does long for a boyfriend, and to belong to a clique, what she really wants is far more existential: to become the person she’s promised herself to be. So, she sets about becoming the version of Kayla that she prosthelytises about on YouTube, in videos such as Be Yourself and Put Yourself Out There for an audience of next-to-no-one. The first step to being more outgoing and confident is to attend that pool party: if you can just persevere through a panic attack in the bathroom, you can find the strength to walk through those patio doors, no matter how vulnerable you feel.

Just as anaesthetic as the late night, blue light scroll is the language of self-help and self-improvement featured in Kayla’s muddled vlog speeches — ‘Being yourself is, like, not changing yourself to impress someone else.’ 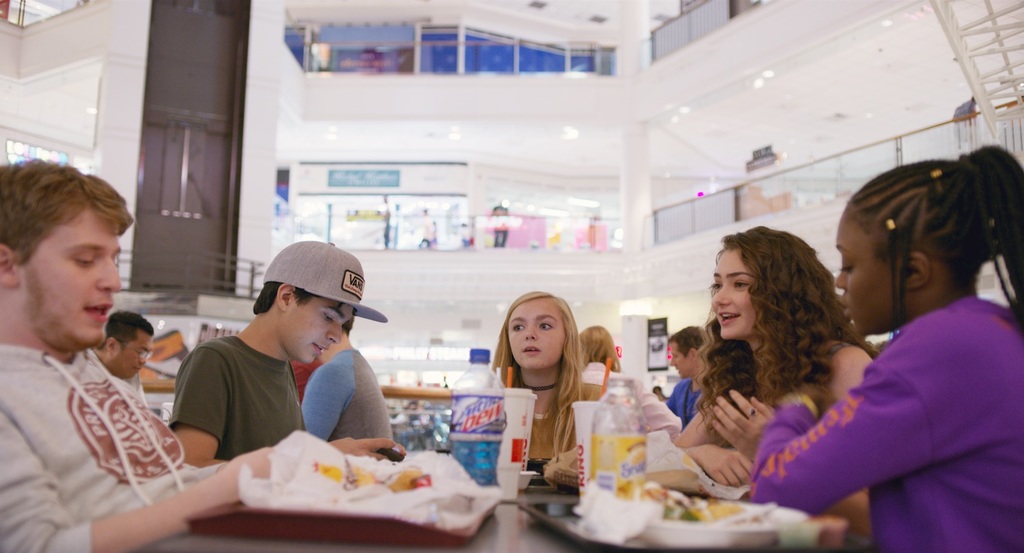 At one point, a priggish high school boy tells Kayla that she must be wired differently because she got Snapchat in fifth grade. It’s a moment when you can hear writer and director Bo Burnham’s own curiosity whirring: are teenagers today built in a new mould? What specific challenges do they face? Technology must play something of a role — greater connectivity paradoxically makes loneliness more keenly felt, with Kayla liking posts from people she can barely bring herself to speak to in real life. With her headphones in, and an endlessly refreshing scroll at her fingertips, she can momentarily forget all the things that are making her anxious.

When I was a teenager, I knew it was my duty to pave the way to my future adult happiness. But as anyone who has ever been a teenager having a wobble will know, sometimes the imposition to ‘just Be Happy’ can be a terrible roadblock to that end: the societal pressure to find happiness — as if it was an attainable and stable state, rather than something much more complex and fleeting — can cause you to remain unhappy. And the message the adults of tomorrow, like Kayla, are getting seems to be far more nefarious: it might be something like, Live your best life. In other words, the new pressure is not only to be happy according to society’s standards and measures, but to define and constantly redefine what happiness means to you, thus to have created your own lofty heights from which you will inevitably fall short.

Just as anaesthetic as the late night, blue light scroll is the language of self-help and self-improvement featured in Kayla’s muddled vlog speeches — ‘Being yourself is, like, not changing yourself to impress someone else.’ It’s excruciating watching her trying to believe this, and it’s excruciating when she falls short, as when she crawls around her classroom during a school-shooting practise drill and insinuates to Aidan (voted Best Eyes) that she has dirty pics of herself that she might send to him. At moments like this, her fake-it-till-you-make-it mantras seem at once like naive, magical thinking and admirable, pragmatic solutions to the nebulous struggles she faces.

As a fable for our times, though, teenage boys and girls alike can look to Kayla for comfort: everyone is sad, and lying. 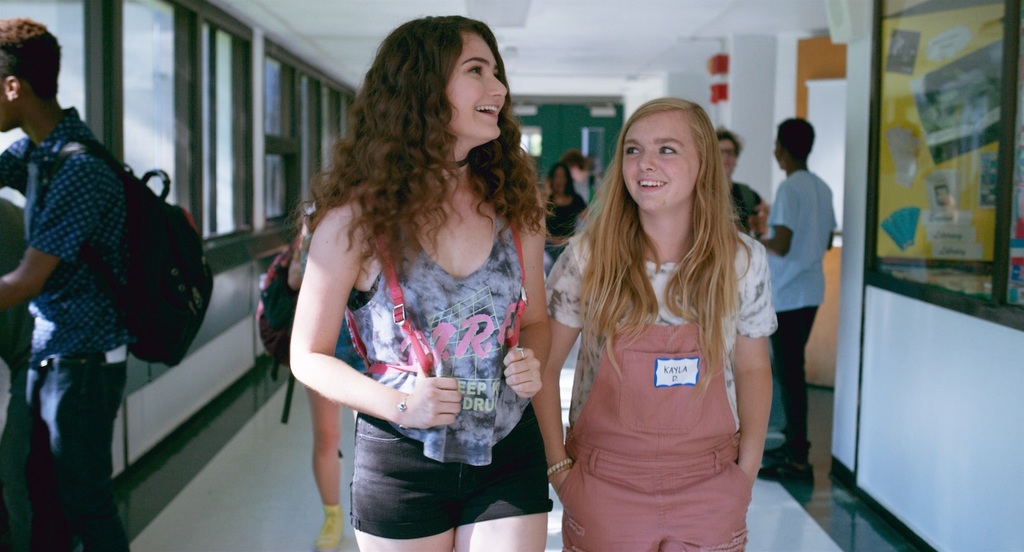 With a greater proliferation of means of self-expression — YouTube, Snapchat, Instagram — comes a deeper sense of self-consciousness. ‘Eighth Grade’ has teen spirit, wafting like shimmering waves off a hot pavement. It’s a nail-biting story of an average girl facing average problems, who can’t help but wish that at the very least she’ll learn to perform a better highlights reel and at the same time get better at accepting the behind-the-scenes. The kicker, as you meet Kayla closer to where she is than where she wants you to see her, is thus: the videos come after the cripplingly anxious-making scenarios they purport to be antidotes for. Vlogging is new, but understanding ourselves only in retrospect is old as anything. Then, imagine if your most ill-advised teenage platitudes were preserved for ever, accessible anywhere. Kayla comes to shed the cocoon we all aspire to do away with, and it’s this remarkable stride towards self-realisation which feels like one of the film’s only off-key notes. It’s not that easy – certainly not at 14 – to achieve something like self-actualisation, especially in a piranha pit of adolescent Instagram. Kayla’s right, of course – but that’s precisely what’s wrong in an otherwise almost flawless debut from director Burnham. As a fable for our times, though, teenage boys and girls alike can look to Kayla for comfort: everyone is sad, and lying. That truth should salve some hurt.