What’s more menacing? A guy in a Freddie Krueger mask squaring up to the camera, or a middle-aged woman brandishing a sign proclaiming WOMEN FOR TRUMP, scrawled with black marker onto a bright pink board? Cornelia Parker, for one, isn’t sure.

The Very Good and the Very Bad make an impression on us as children, and we never stop talking about them. 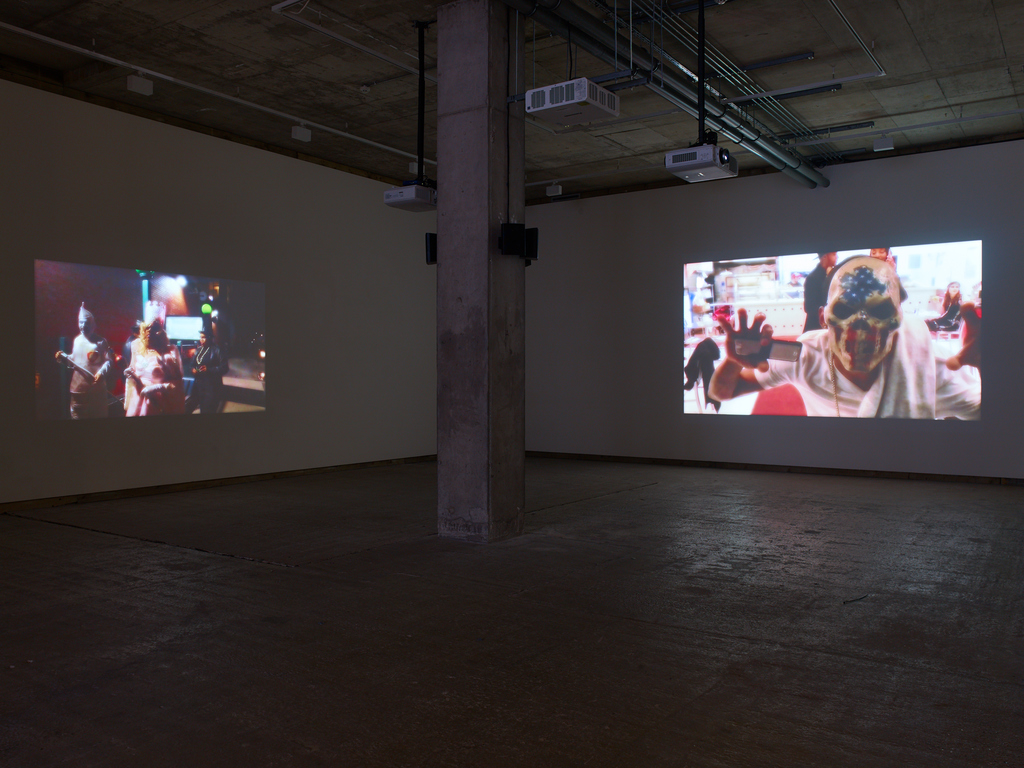 In October 2016, Parker and her husband were in New York to witness two all-American spectacles – Halloween, and the run up to the 2017 election which saw Donald Trump installed in the White House. The latter followed the former by only a few days, and ‘American Gothic’, a four-channel video installation at Frith Street’s Golden Square, features Americana out in force. On October 31st, old favourites flood the streets – Uncle Sam and characters from the Wizard of Oz mingle with vampires and Hannibal Lecter. The key to a successful Halloween costume, it seems, is recognisability – no one wants to spend all night explaining who they are, age 17 and dressed up as ‘The Second Mrs Dewinter’ from Daphne du Maurier’s ‘Rebecca’ (I know). 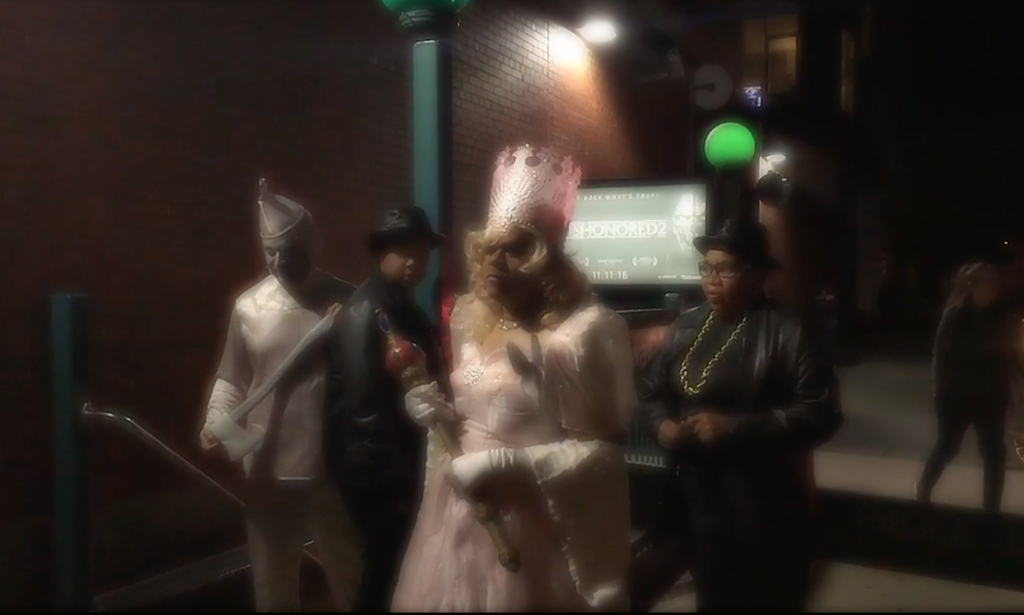 So if the principal is universal familiarity, it’s worth considering the criteria for a figure woven into the popular consciousness. They tend to come from our childhoods; we remember superheroes and the protagonists from fairy tales. At the same time, we hang on to villains, murderers and bogeymen. The Very Good and the Very Bad make an impression on us as children, and we never stop talking about them. They’re two archetypes, easy to compute and clear to read; humanity boiled down to black and white, virtue and evil, with none of the grey muddiness which comes to colour most everything as we grow into adults and begin to understand ethical ambiguity. This moral binary slots into politics as easily as a Donald-Trump-shaped building block into a Donald-Trump-shaped recess. Trump is famous for his simple rhetoric; Make America Great Again, Lock Her Up and Drain The Swamp affirm our most childish desires, for safety and justice both. Never mind that MAGA means nothing – when, exactly, was America great? – that the ‘swamp’ of the White House is more putrid than ever, that Trump’s committed more crimes since he came into office than Hilary, with her personal email server (the horror!), could have conceived of in a life time; the slogans make possible the idea of a simple life, where not only do the good guys triumph, but you are the good guy, getting his just deserts. 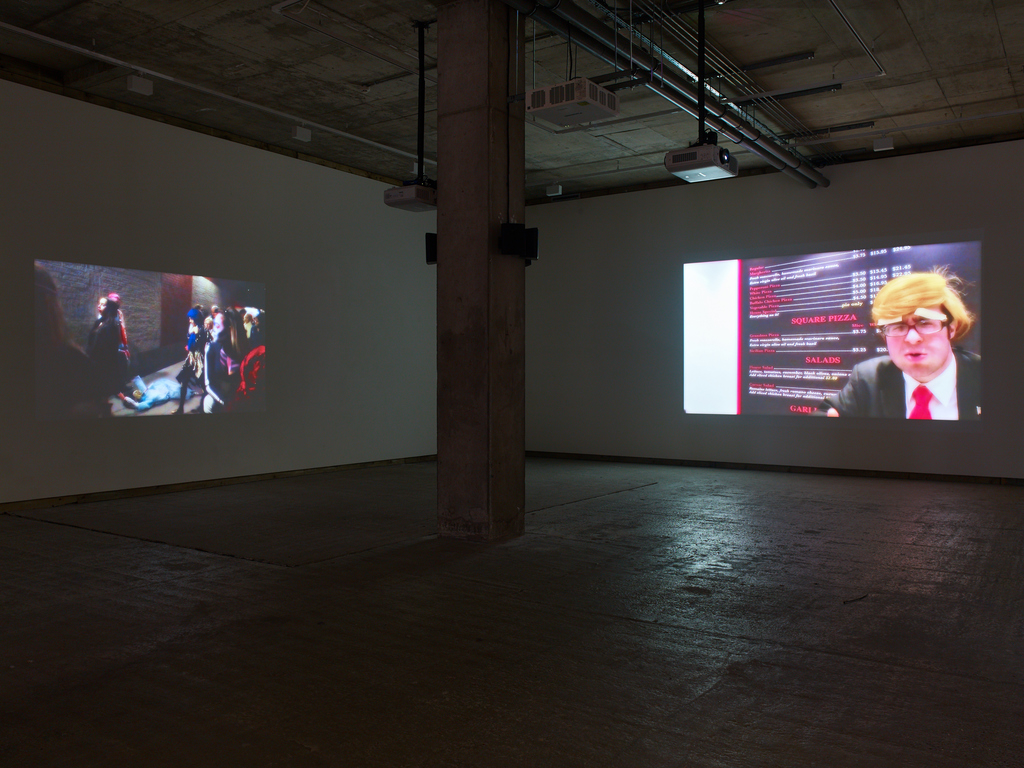 Trump sounds like a cartoon character, and he looks like one too; the only trouble is that he and his supporters are sure he’s the hero, while a huge proportion of the world is panicking as they watch decades of progress unravel beneath his tiny hands, and wake in the early hours drenched in sweat at the idea of him with access to nuclear codes. A second channel of ‘American Gothic’ features footage of the subsection of the USA with whom Trump’s message resounded most starkly; pressed against the barricades, Trump’s campaigners seem a much more compelling threat than the carnival violence of the ghouls and trolls marching through the video stream opposite. Eventually, the Halloween channel stumbles across a reveller dressed as Donald, and suddenly the two channels meet, not just thematically, but explicitly.

Trump sounds like a cartoon character, and he looks like one too; the only trouble is that he and his supporters are sure he’s the hero, while a huge proportion of the world is panicking as they watch decades of progress unravel beneath his tiny hands, and wake in the early hours drenched in sweat at the idea of him with access to nuclear codes. 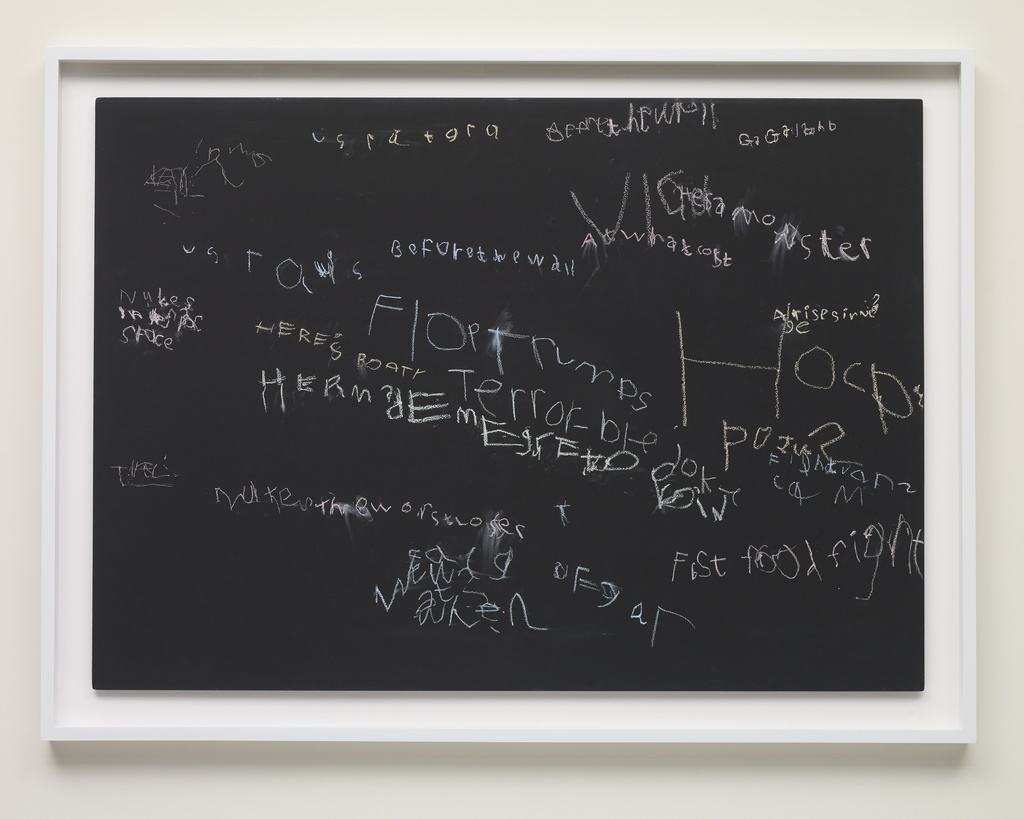 In all this blind outrage, paradoxically, is woven the subtlety it seems to negate. Like the children Parker collaborated with to create ‘News at Five', and 'News at Ten’, we’re only trying to make sense of it all. We’re just as impulsive and irrational as a class of eight year olds, once you strip back the self-righteous posturing of adulthood. The lie – which is what it is – that there are ‘bad guys’ and ‘good guys’ is what fuels facile assertions like Mexicans are rapists, women are pigs, people from Syria are terrorists. There is progress promised in nuance, and there’s plenty to be found in ‘News at Five' and 'News at Ten’ - if not in the words scrawled on the blackboards which constitute the pieces. The gruesome spectres of Halloween in New York make a reappearance in the headlines of British and American newspapers – ‘Monster of Mosul’, ‘What lies beneath’ – as does the fear which fuels their longevity, ‘Don’t believe a word of it’, ‘M15 is bugging my TV’. Of course, the implications are multiple. First, the infantile literalism employed by the media is highlighted, their headlines transcribed by children. More than this, though, is the medium itself. Chalk and blackboard are staples in our idea of classrooms, clichés which endure long after their usage has faded. These melodramatic snippets of world affairs, the piece seems to caution, are what our children are absorbing. Phrases like ‘ISIS death pit’ might as well be on the national curriculum, repeated in unison like times-tables. 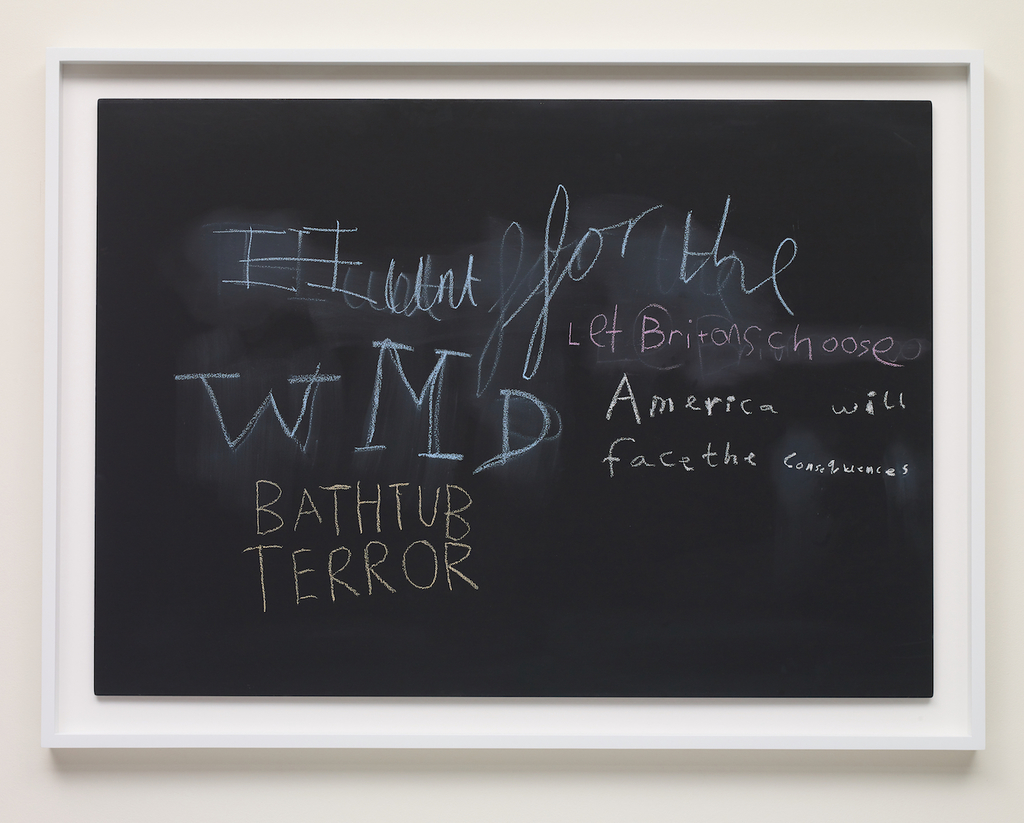 Both American Gothic and the ‘News’ works serve as a kind of documentary evidence. The headlines, the rabid fans, the New York revellers, are all ‘ready mades’, plucked from their sources and assembled en masse by Parker’s astute eye. It’s their juxtaposition, their contemporaneity, which come to reveal a greater movement at work; the exhibition is more than the sum of its parts, and it’s presented refreshingly free from didactic commentary. Don't say she didn’t warn you.