We track a gull cruising along the Los Angeles coast. Waves roll into the bay. ‘So you know once bitten twice shy?’ This is Luke Goss in interview, sitting on the sand. ‘Twenty times bitten, and a little shy.’ A beat. He chucks a pebble that is too miniscule to be seen on camera, or maybe he forgot to pick one up. Either way, it’s a petulant gesture, and one that we’d expect of a teenager or an eight-year-old.

'Being a twin is actually something you’ve got to get used to. Because when you’re born, it’s just “There’s your brother”. And then you realise you’re a twin. And then an identical twin. I think you have to find a place of truth and authenticity as quick as you can.’ 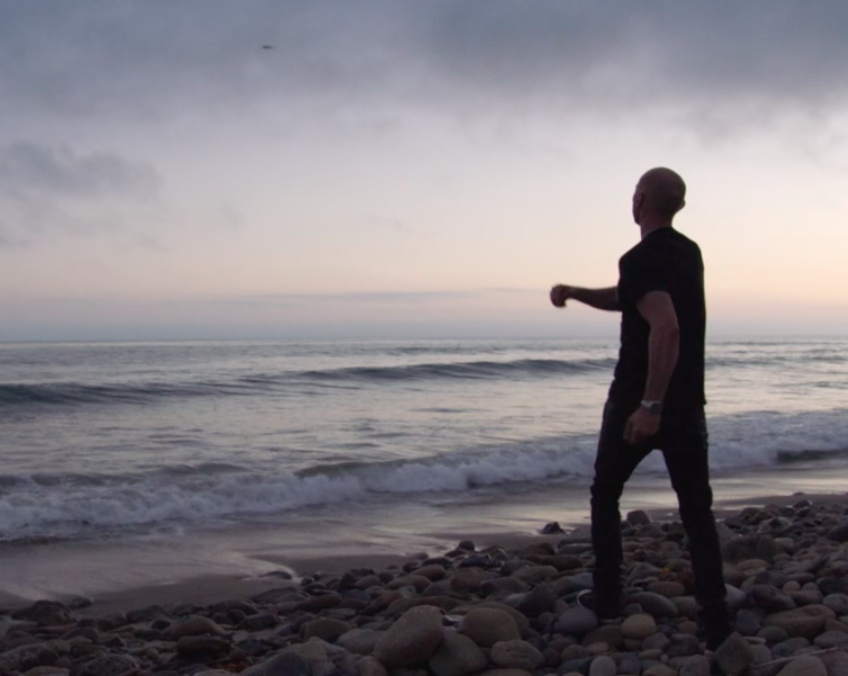 Luke is one of those men in their 50s who don’t dress appropriately for their age: in Top Gun aviators, black skinny jeans, and a matching black CBGB t-shirt (which he’d probably call a ‘tee’), he looks like a teenager announcing his subcultural tribe to the world (I know all about punk and new wave, dude). The black clothes and the sulky vibe recall Claudius lecturing Hamlet on his mourning robes: ’Tis unmanly grief’, the sign of ‘A heart unfortified, a mind impatient’, Claudius says, urging Hamlet to move on from his father’s death. To mourn for too long is emasculating and inappropriate. Similarly, Luke Goss is stuck in the past. Bitten not just once. Nay, twenty times!

Bros: After the Screaming Stops is not a Renaissance tragedy. But it is tragic, in the same way that Ricky Gervais’ and Stephen Merchant’s The Office was tragic. Although Bros isn’t fiction, it shares The Office’s ability to evoke toe-curling, cathartic pleasure. And like the earlier show, it operates by exploiting the tragic gap between how we wish to be perceived and who we actually are. David Brent, for instance, determinedly believes everyone loves him to cover the crushing loneliness inside. Likewise, twins Matt and Luke Goss seem to believe that making this BBC documentary will make them appear wordly-wise and vindicated; that playing a Bros reunion show at the O2 will redeem them as serious musicians; and that, ultimately, the real reunion will be theirs, as a family. As twins. At least, it would be easier to believe all this than to admit to yourself that your brotherly ties have been irreparably severed by the grotesqueries of early fame, and that you’ve lived most of your adult life grieving that separation, somewhat shell-shocked, I’d imagine, and a little bit damaged. 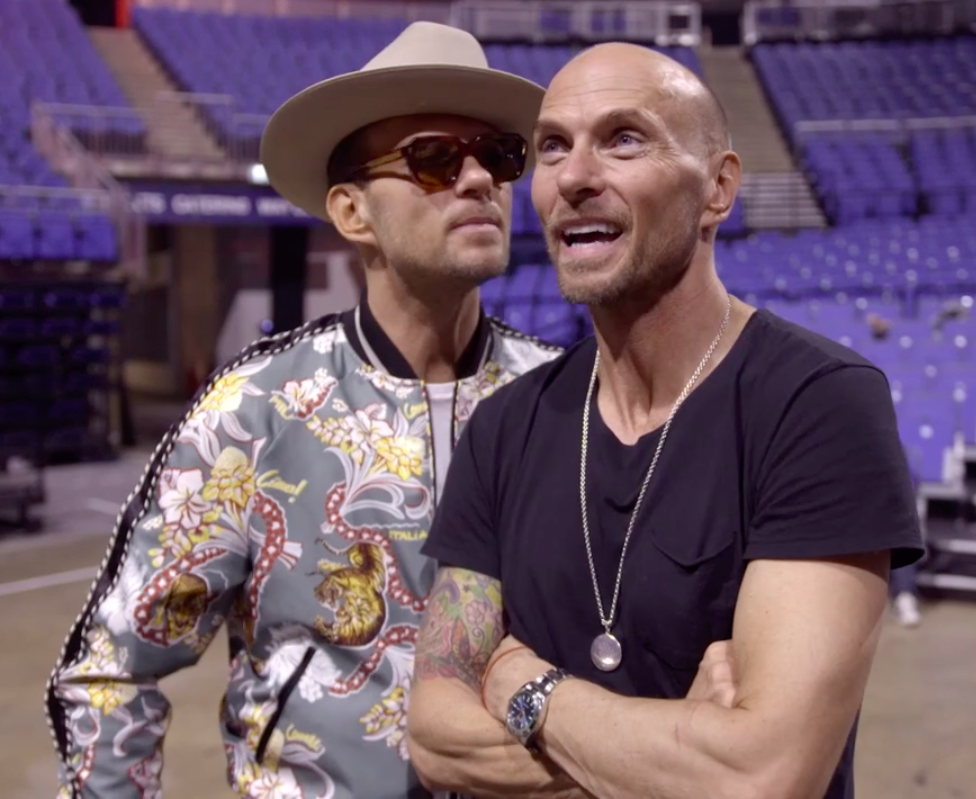 What the documentary makers seem to have realised is that self-deception is a tragic flaw when we lie to ourselves to such an extent that we cannot change. But on the other hand, lack of self-awareness, in the short term, is very, very funny. ‘Being a twin is actually something you’ve got to get used to,’ Luke tells us, still on the beach. ‘Because when you’re born, it’s just “There’s your brother”. And then you realise you’re a twin. And then an identical twin. I think you have to find a place of truth and authenticity as quick as you can.’ This latter part is undercut by sleight-of-hand editing, Luke’s discourse on sincere experience playing over melodramatic shots of him slinging rocks into the sea. Alarm bells will be ringing for psychoanalysts and existentialist philosophers alike with the ressentiment on display here: it’s just not Luke’s fault, you see, the enemy is the fact of his twindom — clearly a painful realisation.

You’ll notice early on that both Goss twins speak with a shoot-from-the-hip sagacity that they are unaware makes them appear not at all cool or deep. They can make the most humdrum topics uncanny and new, and the most profound topics hackneyed and blah (It’s just, you’re born, and then you realise stuff. You know?) In terms of inventing platitudes that make you spit-take, Matt is undeniably the star (‘Oh Whoop Dee Doo, Matt’s the star’ Luke would cry if he were reading this, since he’s also got a complex about how Matt was the frontman and songwriter, whilst he was, sob, only the drummer). We join Matt in his Las Vegas apartment, reclining on his sofa, which he calls a ‘cave’. He’s similarly inappropriately dressed, though he’s gone down a less emo route than his brother — with his blond hair, a red bandana tied around his neck, denim jacket and boots, he’s reminiscent of someone who once auditioned for the Milky Bar Kid and stayed in The Method for thirty years. He’s got crystals everywhere, but he’s not a hippy — he just believes in energy with every fibre of his soul. Okay?! Anyway, this is one of Matt’s early zingers: ‘I think the letters H-O-M-E are so important, because they personify the word home, which means it’s the place that you come and you feel safe.’ Taking us on a tour of his H-O-M-E, he points out a chess board: ‘Chess. Love a bit of chess. Got the uh… Have a Few glasses of scotch- long game of scotc- I mean, long game of, er, chess. Love it.’ He loves it. He’s keen to point out another one of the loves of his life: a portrait of his bulldog, Alfie, holding a pint of beer. When he’s not performing at The Mirage, recording in the studio, or playing chess (ahem) you’d probably find Matt watching CNN, which is the ‘thinking man’s reality show’. 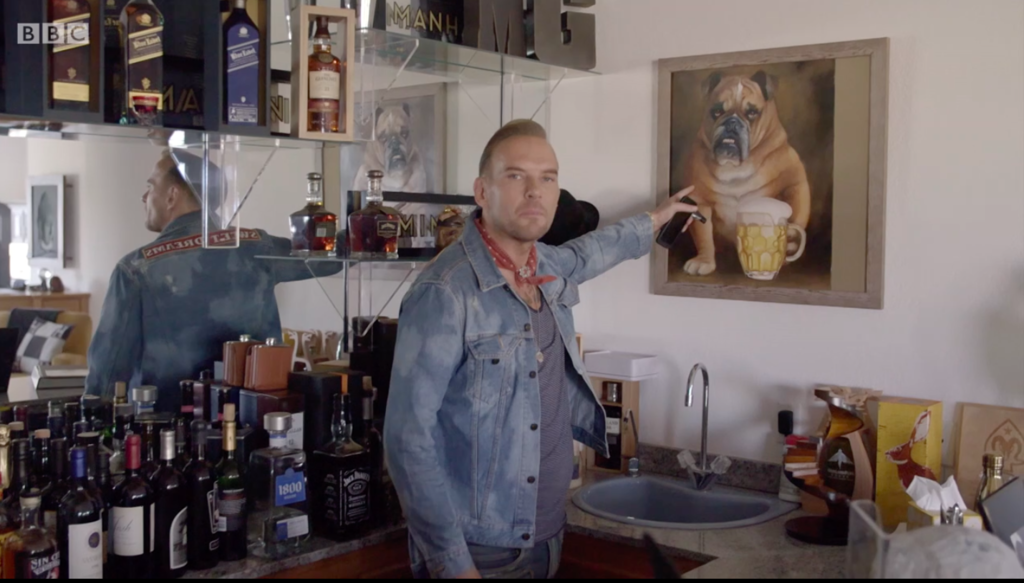 God, I could go on… And I will. Luke strongly feels he’s a London boy: ‘Urm, Big Ben, the Embankment. Cab drivers.’ (Has he ever even googled ‘London’?) Matt’s got a song called ‘We’re all Kings’, inspired by road sweepers: ‘if you see a man sweeping the road, that man’s a king to me, he’s one of my kings because I’m thankful that I don’t have to sweep the road.’

Phew! Alright, enough. Just know that everything I’ve reproduced or commented upon here is taken from just the first ten minutes of the documentary, and that there’s an hour and a half in total, and it’s all quadruple platinum entertainment. But what are we laughing at, and is it right to laugh? Certainly the documentary has been cut (excellently) to direct our laughter at the Bros twins, rather than with them. At the same time, it has been edited with enough subtlety and compassion for the tragic notes of this sibling relationship to be sounded. The brothers talk about having to appear on TV the day after losing their sister in a car crash. ‘We were these people that you saw on Top of the Pops and in newspapers. Matt and Luke were not real.’ That would mess up a lot of twenty-year-olds.

‘If you see a man sweeping the road, that man’s a king to me, he’s one of my kings because I’m thankful that I don’t have to sweep the road.’ 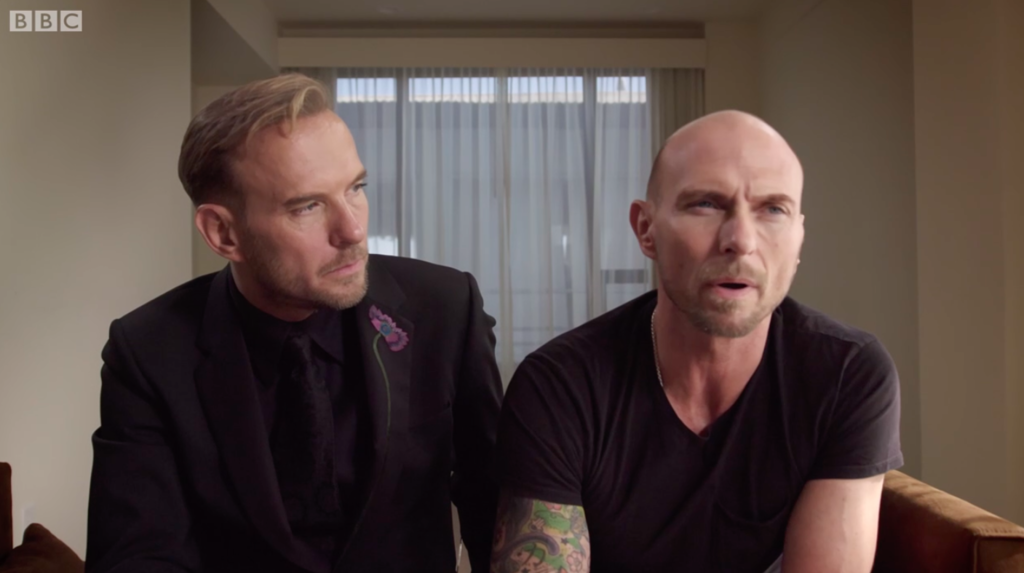 However, the real tragedy, for me, is that ‘Matt’ and ‘Luke’ are still today playing those roles of themselves, as a defence mechanism against the painful business of acknowledging who they really are. By the end of the documentary, the Goss twins have confronted the mirror-image of themselves — their twin — and all the resentment and love-hate that goes along with their intense relationship. But I couldn’t help thinking that this ‘reunion’ was yet another self-deceit. It felt like a way for the twins to resist change, avoiding the difficult work of truly examining oneself in the mirror by exteriorising responsibility: it was the fame, it was the record label, it was my brother. Ironically, and paradoxically, in their desperate attempts to assert their individuality outside of the twin-relationship, the two brothers end up looking the exact same kind of bonkers. 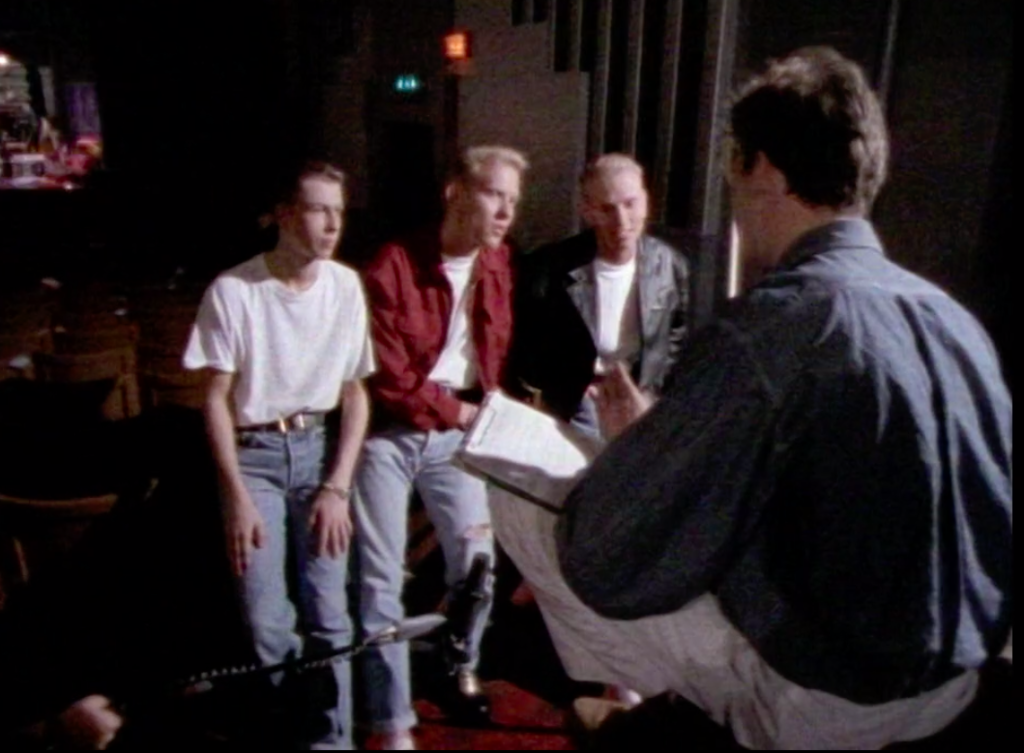 Can we be honest that we’re all liars? We lie to ourselves about the smallest details — ‘I’ll only have one glass of wine tonight’ (when we know we’ll end up having six), ‘I never have sexual thoughts about anyone except my spouse’, and so on. I think part of the reason we find it so cringeworthy when Matt is playing the philosopher poet about road sweepers or HOME is because there are times when all of us have lacked self-awareness, and we all delude ourselves on a daily basis. For Aristotle, tragedy was almost therapeutic, in its arousing and then purging of pity and fear. Maybe the Bros documentary is a good way to purge our feelings of horror at this stadium-scale self-deception. Or maybe I’m deluding myself here. Maybe I’m over-intellectualising because I feel uncomfortable saying that I laughed, and laughed hard, at how silly two middle-aged 80s popstars looked, because. It. Is. Hilarious. 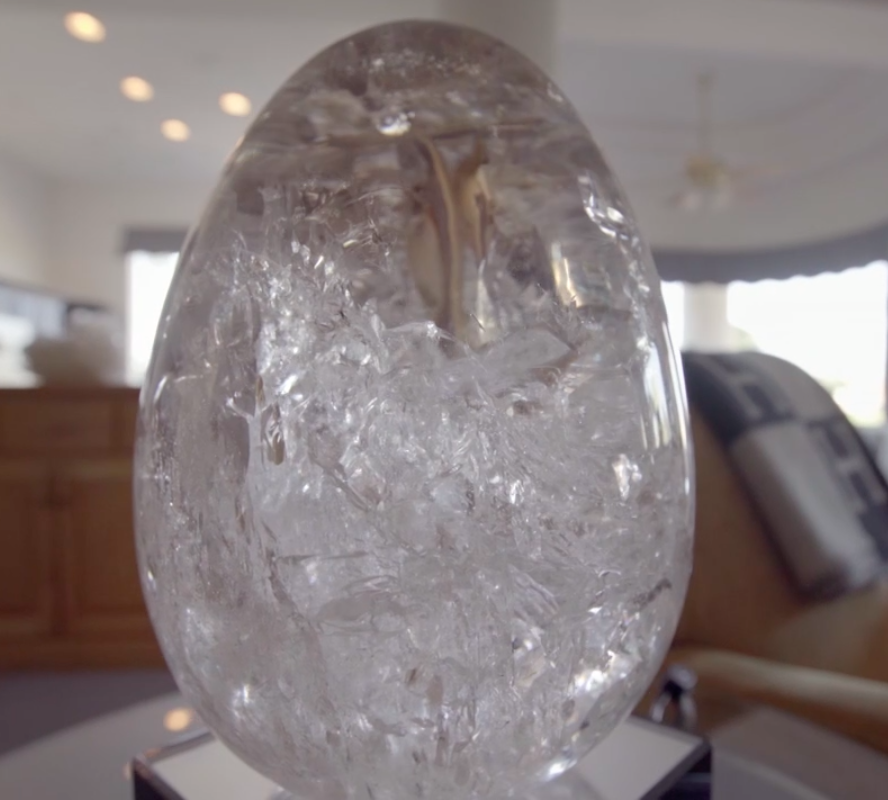