How many gestures do you make, in a day? Where does one gesture stop and another begin? Is your motion, from waking in bed and back, one long movement? Can you make two at once, or do they become part of the same thing by merit of happening simultaneously? Boris Charmatz’s 10000 Gestures pitches some answers to those questions, largely by exploding them.

Some phrases (French) are discernible, pronounced decisively as though joining in with bits of a song she knows while skipping others: the effect is only to compound the aura of private performance to which we ought not be privy. 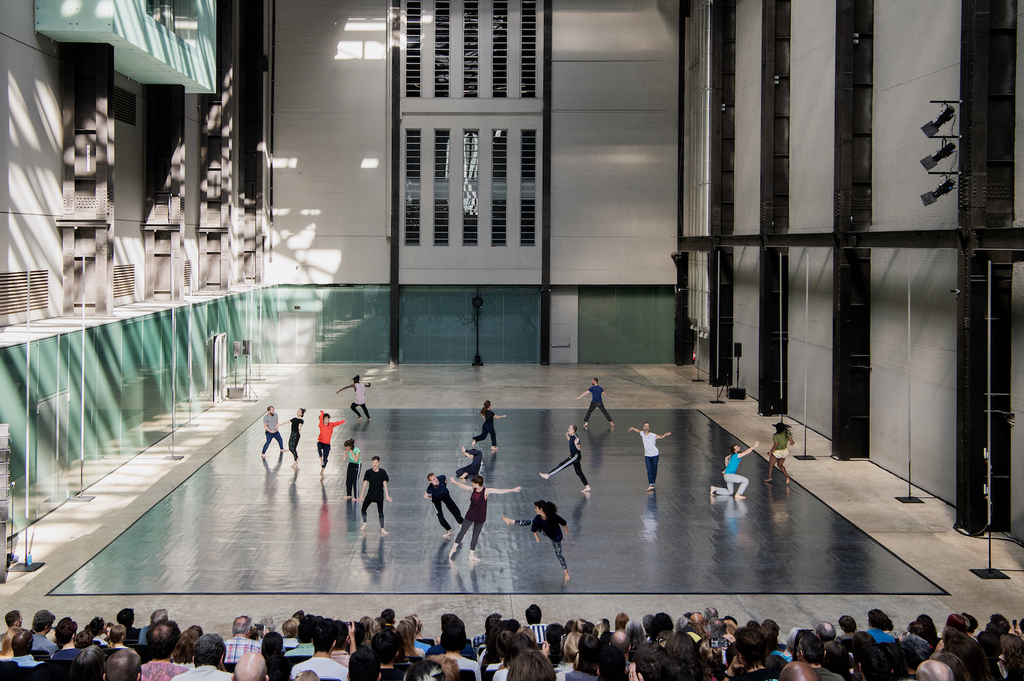 10000 Gestures begins like any journey – with a single step. One dancer takes the stage, running through movements with an air of improvisation so convincing, so dancing-in-my-bedroom or experimenting-in-front-of-the-bathroom-mirror that our presence as an audience verges on feeling intrusive. Her body work is accompanied by vocalisations – humming, groaning, shouting. Some phrases (French) are discernible, pronounced decisively as though joining in with bits of a song she knows while skipping others: the effect is only to compound the aura of private performance to which we ought not be privy. It’s surprisingly tense; some people laugh. Partly, this is to break the strain – but it’s also because bits of the performer’s routine are funny. After all, if you had to come up with ten thousand gestures, none of them repeated, you’d have to cover the comic as much as the profound. The risible, along with the tragic. Undignified wiggling; wrists lolling; face down on the ground, jerking earnestly. At one point, the dancer puts her fingertips on the skin above her breast to make it jiggle, narrating with a speedy little voice as though ventriloquising it.

Here comes the cavalry. 23 more bodies bound onto the stage, each launching into their own feverish string of gestures – moving like they’ll never be permitted movement again should they stop, it makes me think of medieval dancing plagues. In 1518, one woman swaying in a Strasbourg street set off an epidemic of compulsive dancing which saw hundreds of Alsace locals jigging for days on end. Plenty of them met their end, keeling over from strokes, dehydration or exhaustion. I know that’s a sad story, but it’s one of my favourites – there must be worse ways to die than dancing yourself to it, and the hysterical harnessing of mass death drives in a sleepy medieval town is just one episode that proves how unaccountable human behaviour can be. There’s something of that mania about Charmatz’s dancers, each completely absorbed by their own frenetic pull to move and drawing on the energy of their fellow performers at once. Separate, and together. Utterly alone, and inherently interdependent – hey, it’s not a bad metaphor for life. Dance now, because tomorrow may never come. 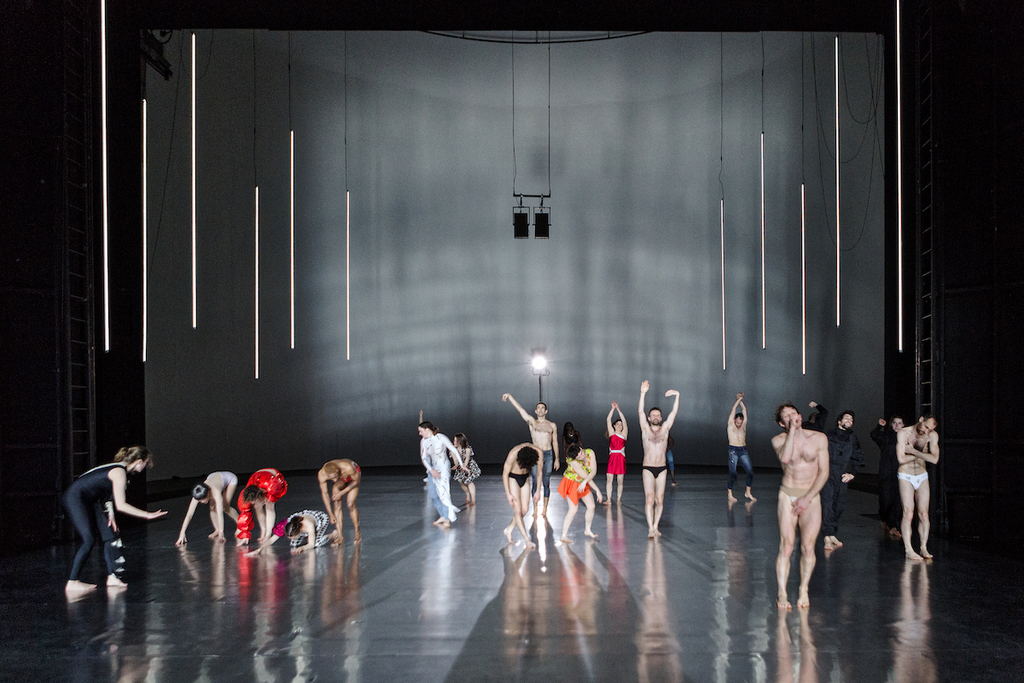 Maybe you dance more than you think you do. Many movements, out of context on stage, would be very familiar if they were granted one. Dancing in a bar, sure – but also shuffling from photocopier to desk; bending to pick up a dropped object; turning to look behind you. Fucking. Fighting. At the other end of the spectrum are those wriggles and twists which seem to have been devised to the brief of ‘gestures we have not yet featured’ – which is, basically, the brief to end all briefs. The piece’s creative constraints are not only generative: inherently insistent on novelty, 10000 Gestures breaks movement down to build it into definitions as yet undefined.

Speaking of the micro and macro, it’s in these most unassuming of the dancers’ motions that Charmatz’s conceit finds its neatest expression. Discussing the tension between choreography and concept, he explains how ‘the more gestures there are, the more precise they need to be, the more clearly separated from one another, the clearer their contours, their boundaries.’ By merit of being multiplicitous, each movement must become more distinct to be counted clearly amongst its neighbours. So it is with the performers themselves, differentiated by their costumes as much as by their physical characteristics – show-girl get ups, leotards, underwear and jeans, body suits and shorts, all deepen the impression of solo journeys on the one hand and of a collective rabble on the other. The nature of the performance means that you can’t watch everyone at once – to concentrate on one dancer comes at the expense of the 20-something others not in their immediate orbit, and so the audience experience of 10000 gestures can never be one of the ‘full-house’; never, 10000. Together, perhaps, me and the hundred or so other people watching saw them all – but then again, we each saw a different sequence add up to an hour’s performance. This figuring of the audience, through the same amalgamously collective lens as that applied to the dancers, cracks open a fissure of distinction between seen and seer. On, and off stage. Me, and you. How many gestures did I see? How many did I make, sat in the stalls and crossing, uncrossing my legs; folding, unfolding my programme?

This figuring of the audience, through the same amalgamously collective lens as that applied to the dancers, cracks open a fissure of distinction between seen and seer. On, and off stage. Me, and you.

As the piece reaches its crescendo, voices – rising in snippets above the music (Mozart) and thud of feet thus far – become lynchpins. As the clock ticks on, and the urgency to exorcise the dancing demons ramps up, Charmatz’s 24 bodies move faster. They begin to scream, accompanying their race to something-like-death with primal vocalisations. Cease. Shout. Silence. Still. Every wave crashing gives way, eventually, like a dam – the relief of quiet and inertia is broken, again and again, by a kind of infectious twitching. We must go on. We are driven to it. As trickle becomes flood once more, the dancers crash up the stairs into the auditorium as they count breathlessly and in semi-unison (sept mille neuf cent dix-sept, sept mille neuf cent dix-huit). Nearly there! Time for gestures which require objects to define them. Time for some improvisation. Dive into the audience, and the river meets the sea. Shoes and hats are plucked from bodies; laps are sat on; ears, tweaked. Someone’s water bottle is thrown from one performer to another, across rows and over heads. Suddenly, the promise of our involvement is manifest – it’s affronting, and it’s meant to be. Time is short: all together now. 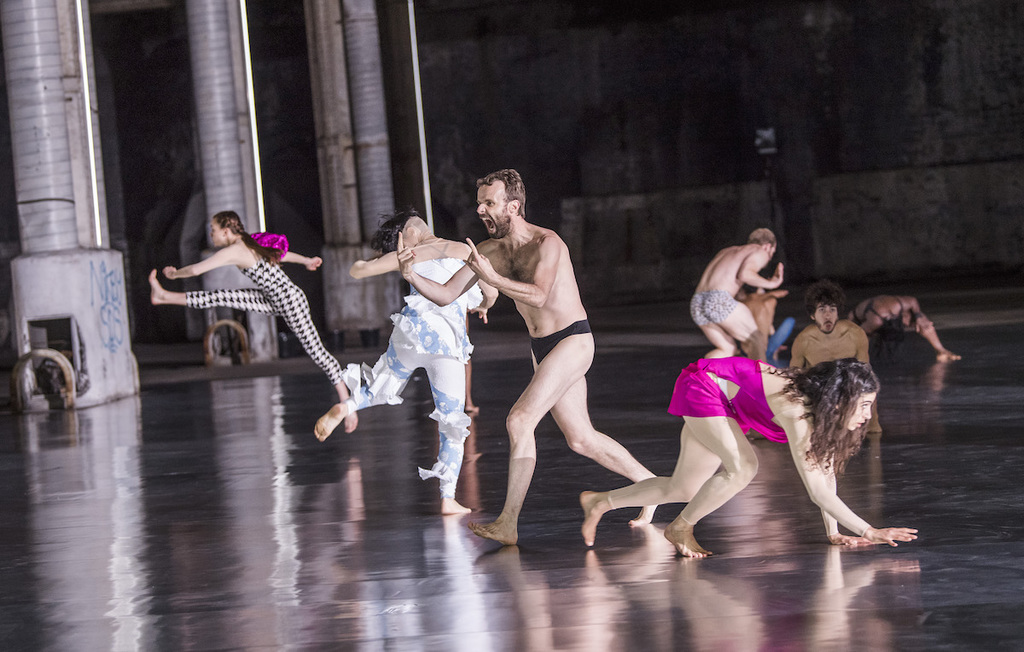 As the hubbub subsides, and as the fourth wall patches itself up, the world ends not with a bang but a whimper. Slide from the stage; walk, or writhe. Exit. Over. Outside now, and making my way home, I begin counting. Phone from pocket. Hair behind ear. Check for traffic. One, two. Three.