BoJack Horseman: You Can Lead a Horse to Water...

Can people change? Are we defined by our actions, or by some essential moral compass? Should people who do terrible things be allowed a shot at redemption, and who gets to decide when a penance is done?

These are huge questions to pile on the shoulders of a cartoon horse. 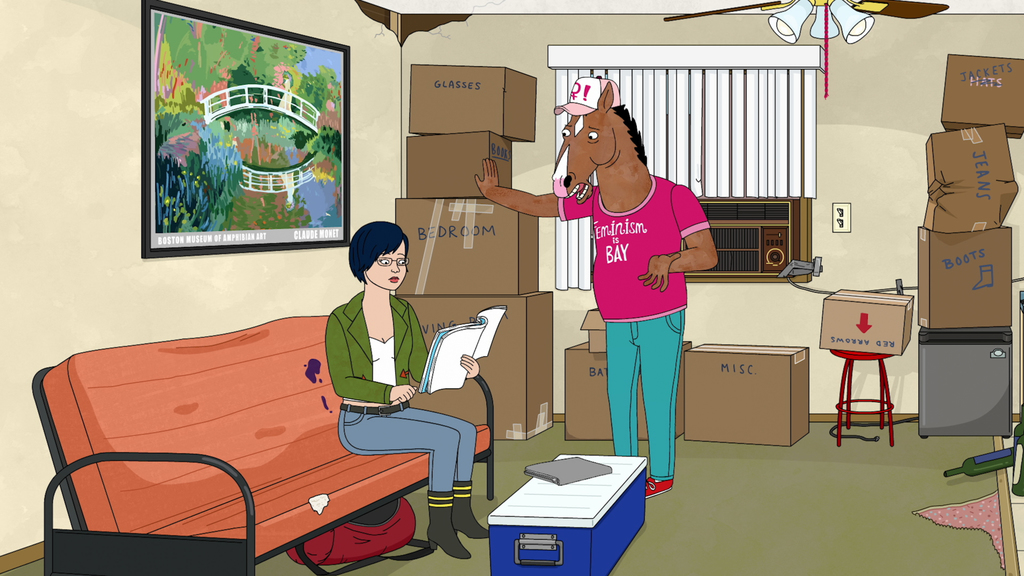 The eponymous antihero of BoJack Horseman is lonely and desperate for approval, prone to narcissistic monologues, angry outbursts, substance abuse: Bad Behaviour in general. Like a toddler having a tantrum, he wants attention. Like a toddler having a tantrum, he’s myopic to a world beyond his own needs and feelings, but deep down he wants what we all want – to be happy and fulfilled. The central question at the heart of this animated sitcom is whether BoJack is capable of changing his life for the better; of behaving properly, sitting up straight and taking a deep breath instead of throwing a fit. What might that happiness and fulfillment look like? And how might one attain it?

He has at least one reference point. As the star of a cheerful family sitcom back in the nineties, BoJack has tasted the sweet possibility of heartwarming mishaps amidst rosy equilibrium promised by much popular television. Horsin’ Around, which follows a young bachelor horse who is forced to re-evaluate his priorities when he agrees to raise three orphaned children, is filled with jokes like this:

Fast-forward twenty years, and things aren’t so simple. Horsin’ Around has run its course and BoJack is a vaguely remembered fading star, living alone in an apartment much too big for someone so lonely. He’s a washed-up alcoholic, increasingly jaded about Hollywood and his place in it, and obsessed with Horsin’ Around. When we meet him in Season 1, BoJack sits watching it over and over again. He’s fixated on the show – not only because he made it in his prime but because it represents everything that is missing from his life now. 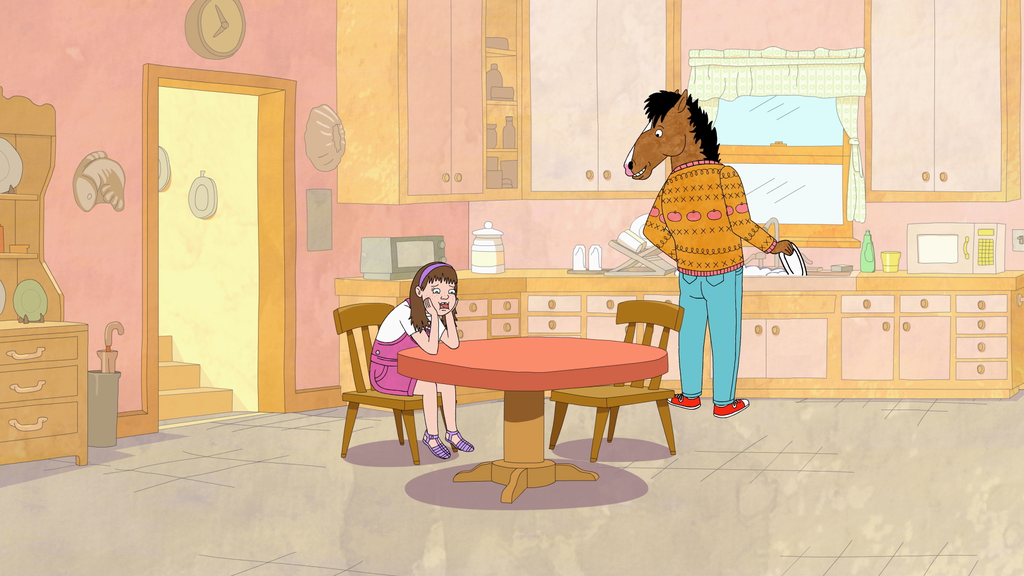 BoJack in Horsin' Around. Image courtesy and copyright Netflix.

We’re not used to mainstream animated sitcoms pursuing such fundamental human concerns. Think of The Simpsons: part of the show’s success was its ability to take the wackiest situation imaginable and bring it back round to the real and emotional. But no matter how topical, smart, or moving any individual episode is, we know that the status quo won’t have changed much – if at all – by its close. Plotlines are neatly resolved, ready for the Simpson family to pile onto the sofa at the beginning of the next installment, a blank slate from which they’ll be drawn into yet another hilarious caper tomorrow night. The assurance of impending resolution provides an audience with a safe space, twenty minutes to follow an arc without fearing its consequences.

While The Simpsons did very well at not only making us laugh but feel, too, it’s ultimately the audience who get the moral takeaway. We thank the characters for the lessons imparted by their actions and consequences, knowing it will seem for them that they never happened come next evening. An episode about tearaway Bart leaping into his studies won’t see him a reformed bookworm in the ‘future’ – although we might learn something about the value of hard work, or following one’s heart, etc etc. Lisa might take up horse riding, but only if she gives it up sharpish because everything must be as it was, and the title will approach the camera through those misty cumulus clouds again and again to zoom in on the eternal yellow family until kingdom come. Part of the implication of this format (knowing or otherwise) seems to be that people never change – once a slacker, always a slacker. Play the saxophone in season 1? You’ll still be jamming 1000 episodes later. Facets of a personality, in The Simpsons and shows like it, are essential rather than malleable. Not so, for human beings, and not so for a cartoon horse – accountability’s a bitch.

At times I have to double-take and remind myself that the character I am watching wade through the hardships of life is actually a cartoon horse with a pink cat (Princess Caroline) for an agent. People are animals, after all. 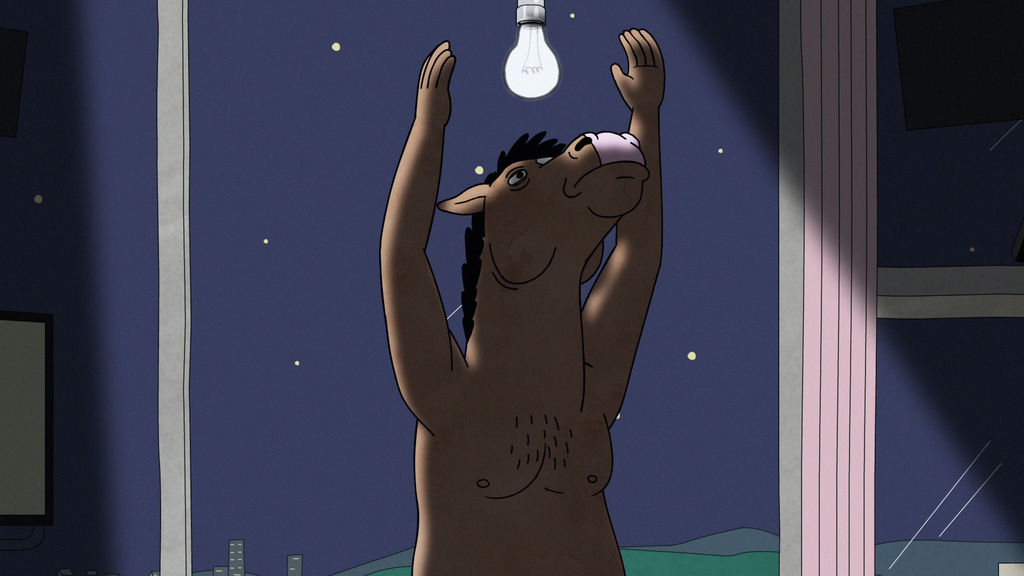 It’s not a kooky gimmick to allow a (literally) 2D show to be driven by (metaphorically) three dimensional characters. On the contrary, BoJack Horseman’s form is completely aligned with its central conflict. The dissonance between watching an animated sitcom — a format in which we have learned, more or less, to expect nothing irreversible to happen — about someone who is striving to reverse the consequences of his past actions and enact meaningful change is funny in itself, but it’s also part of what BoJack Horseman’s about. Form follows function. There’s such a huge gap between who BoJack wants to be, and the person he is — just as at times I have to double-take and remind myself that the character I am watching wade through the hardships of life is actually a cartoon horse with a pink cat (Princess Caroline) for an agent. People are animals, after all. 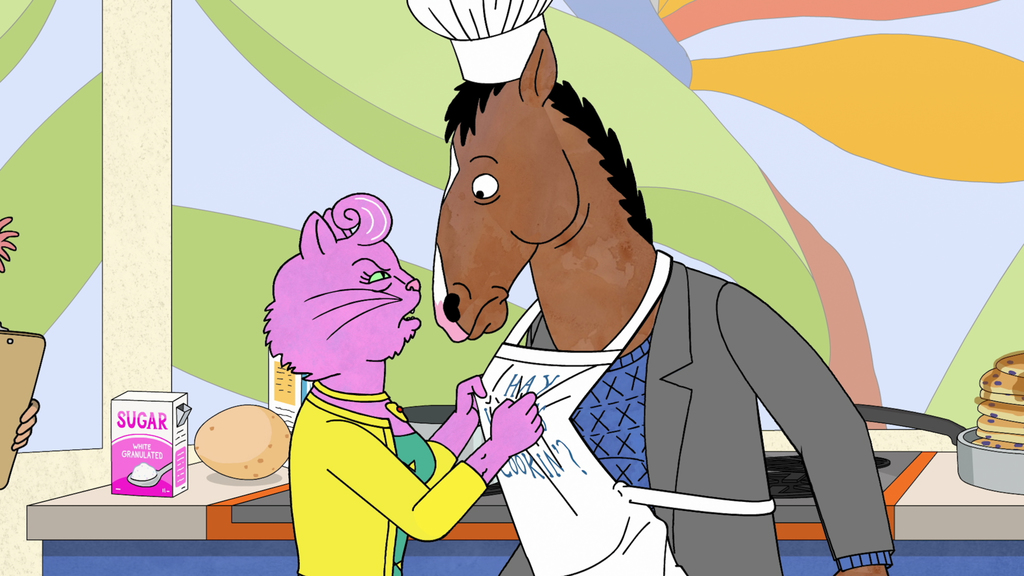 BoJack is a tricky show to recommend because at times you have to watch it through the gaps in your fingers. It’s a bit harrowing. It’s not Family Guy with a horse. It’s funny, but not in the way you’d think. BoJack’s ill-judged attempts to reform result in a humanity inseparable from this essential struggle to change. Each episode sees its writers leading the horse to water… But you know how that goes. Through themes ranging from opioid dependence to infertility, divorce to cringey soul searching in Vietnam, overdoses to asexuality, the cast of BoJack Horseman limp onwards, grappling with the collision of their personal neuroses and a rigged system which spits out random snippets of justice and cruelty. It’s ruthless: 1+1=2. Things catch up with you, and sometimes they come out of nowhere. 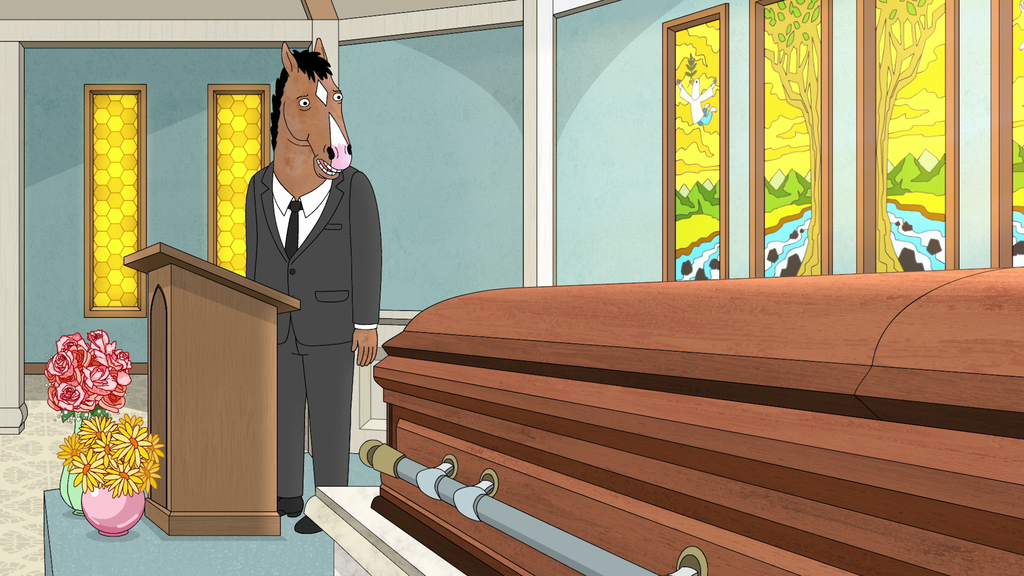 Bartholomew JoJo ‘Bart’ Simpson was ten years old when he first appeared on screen in 1987. Were he alive today he would be 41. From an early age, his nihilist outlook and disrespect for authority — only amplified by his incompetent and abusive father, as well as being the repeated victim of criminal mastermind, Sideshow Bob — did not give him the best framework with which to enter adulthood. His life-without-parole prison sentence ended prematurely yesterday due to complications owing to liver disease, caused by the alcoholism he inherited from his father.

If you liked that, you’ll love BoJack Horseman.