Read on, but don’t think about it. Enjoy yourself.

Familiarity. A poorly-animated, vintage-looking craft moves unconvincingly through space. Look closely, and there’s a film scratch effect. Keep that in mind for a second. Interior: U.S.S. Callister. Automatic doors open, revealing Captain Daly (Jesse Plemons), a squeaky clean, baby-faced villain: for now, he’s our hero. He has swept back hair and a seeming teenage delight in his own acting ability (everybody, this is how a real actor looks stoical), brilliantly parodying Shatner-era Star Trek. Remember the film damage overlay in the opening shot? What we’re being sold here is nostalgia, and we love it – as record-breaking box office figures for J.J. Abrams reboots attest.

What we’re being sold here is nostalgia, and we love it – as record-breaking box office figures for J.J. Abrams reboots attest. 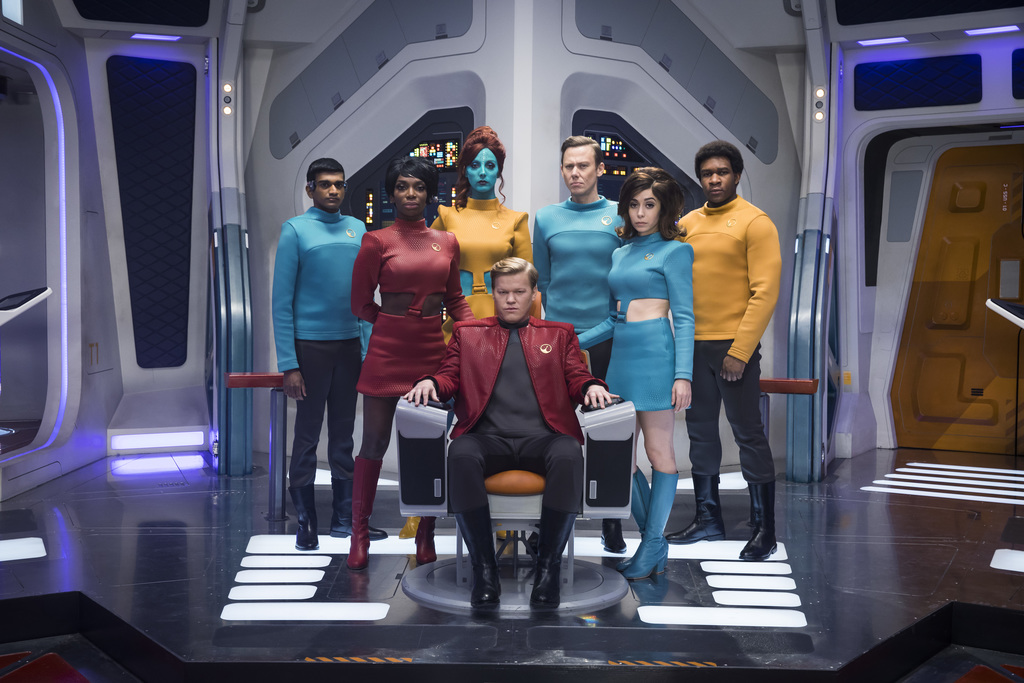 You’re safe here. As the scene ambles on, wheeling out well-worn space adventure tropes, the tension comes from its relentless camping of these conventions, rather than the deliberately two-dimensional drama itself. It’s all too perfect. At its denouement, while three cheers for the Captain resound, Daly goes full V-J Day in Times Square with both the women on his ship, who give themselves up for kissing with the enthusiasm of starfish.

Cut to: Automatic doors open, revealing Capt. Daly in glasses, beanie and drab grey clothes that contrast his pastel-pop Space Fleet uniform. He’s in a lift. His eyes remain lowered. Where are those pseudo-steely looks into the middle-distance? He alights, tears off his hat. His hairline’s receding.

No wonder he wants to escape. As Daly enters a sterile office building, Charlie Brooker (Black Mirror’s creator) drops breadcrumbs. Ostensibly quiet and mild-mannered, Daly is the founder of Callister, Inc., a virtual-reality-cum-videogame development studio where he’s under-appreciated and mocked by his co-workers. Although he’s the brains behind the operation (Daly is the developer of ‘Infinity’, an immersive multiplayer game which seems to have revolutionised industry standards), he’s awkward and redundant. He can’t wait to get back to the U.S.S. Callister, his own personal modification of the Infinity simulator he coded. 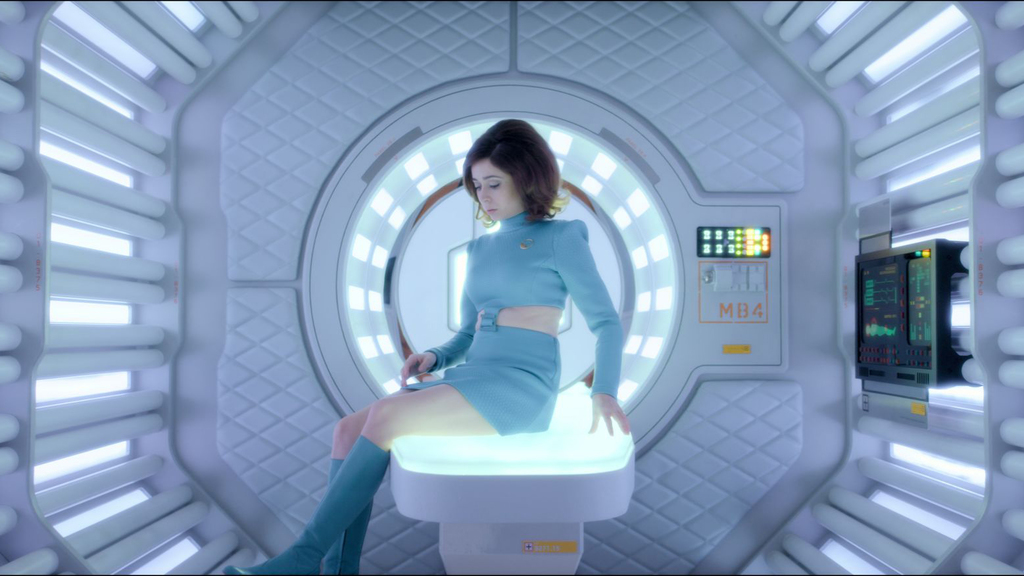 Enter Cole, a puppy-dog-eyed new colleague who is in awe of Daly’s ground-breaking work. Finally, someone who appreciates his genius. But that’s not enough. Daly rifles through Cole’s bin, swabs her DNA from a used coffee cup, and imports her into his Infinity mod.

Cole 2.0 – in the form of a sentient series of 1s and 0s generated from her genetic profile – is less than happy to wake up on the U.S.S. Callister. We learn that, as the ‘real’ Cole continues her life in Daly’s office oblivious to this alternate reality, her digital clone – same-but-separate – can exist in this simulation forever. Cole is living, with equal freewill and sentience, in two places at once. While New Callister Cole knows about Original Office Cole, the same cannot be said of the equation reversed (yet).

Daly doesn’t control her (or her crew mates, long since resigned to plasticky grimaces and obedient, staccato praise of their captain) like someone with an x-box handset; he doesn’t need to. He uses techniques which might work just as well in the ‘real world’ (torture, intimidation and coercion: for all intents and purpose, he’s dealing with human beings), bolstered by the realities of the simulation. There’s no one to call, no authorities to intervene. There is no death on the U.S.S. Callister; pain can continue to be experienced forever without the release of nothingness to break the agony. It’s pretty dark stuff. In this universe, Daly is a jealous god. He gets his own way here, which compensates for his experience outside – but what compensation can there be for his crew, subject to his every whim?

There is no death on the U.S.S. Callister; pain can continue to be experienced forever without the release of nothingness to break the agony. 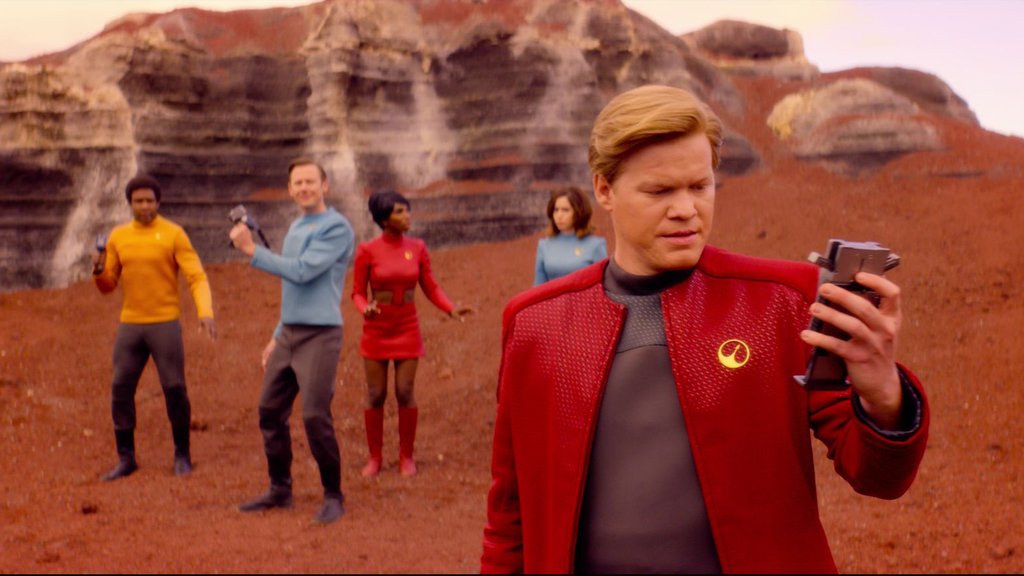 The ethical questions – is this any way to treat sentient code? Is a simulated person a person? – are compelling, if dealt with by heavy hands. On the nose or not, it did make me reconsider hours of killing sprees on Grand Theft Auto. Simulations like these can be chalked up to pure escapism, can’t they? I wouldn’t actually pour kerosene over pedestrians and strategically parked cars, then stand back and watch the domino effect of vehicles exploding and innocent people reeling in flames. Then again, there must be a part of me which would like to; otherwise, what joy could be found in pretending? The difference between video game violence and real-world cruelty doesn’t need unpacking – the contrasts are stark and intuitively understood. In this episode of Black Mirror, though, those clear edges melt away.

Black Mirror is keen to keep us watching: there will come a lesson to be drawn from the hammy monologues and funny costumes. The show often reverts to well-worn pleasure strategies of the entertainment industry: jump cuts, peril drawn out and then resolved, dramatic irony. Don’t worry about it. Just keep following me this way, deeper into the thought experiment, beckons Brooker. Corny endings, or suspiciously neat storylines (doubly pertinent in this episode revolving around nostalgia), are not accidental. This makes them unsatisfying to criticise, in much the same way as I have no time for people who point out glaring plot holes in the new Star Wars films. It doesn’t matter, because every time I hear the kwishhrrrmm of a lightsabre being fired up, dopamine receptors in my brain formed in childhood are ignited. In Black Mirror, too, continuity errors are not the point; rather, familiar formulas take us out, for an hour or so, of real life's uncertain mundanity. The show functions for us in much the same way as ‘Infinity’ works for Daly. 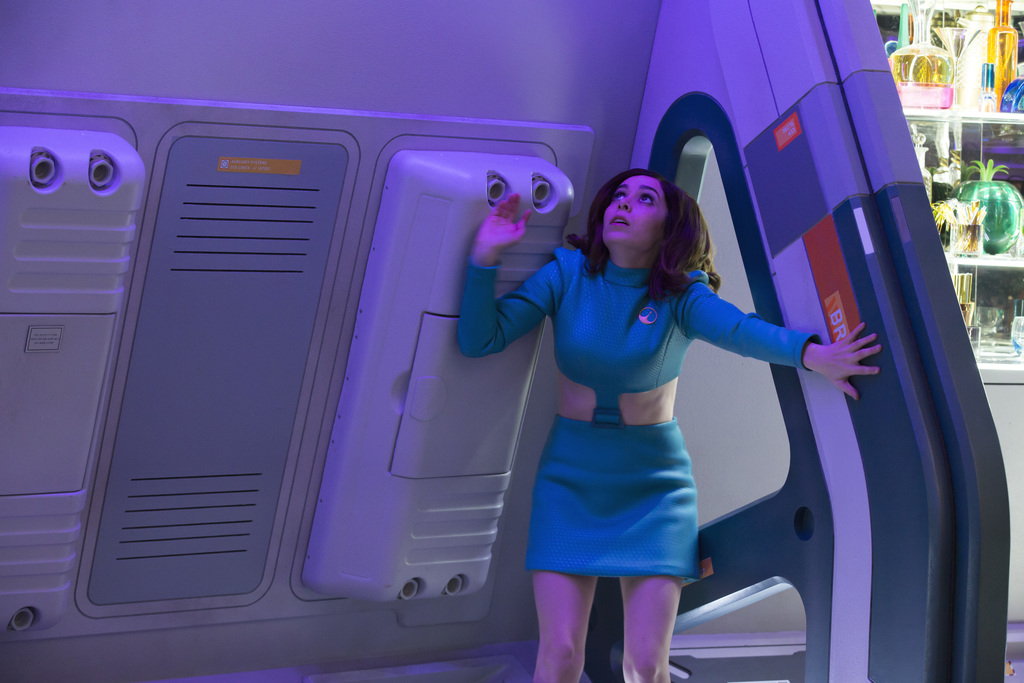 When the images on a screen are extinguished, we are suddenly confronted with our own reflection, upon and – as though – within the world we were so recently peering into

While the series employs tropes of contemporary television, drama and film, the moral woven into each episode means that Black Mirror hearkens back to something much more ancient. It’s true that this strategy can feel at odds with the slick production and quasi-naturalistic acting, but that’s where the magic lies: Brooker crafts morality tales we can recognise, stories for which we, individually and as a society, are teetering on the brink of bringing to life. These are fables, of a sort.

Black Mirror does not so much hold the mirror up to society as darkly satirise a state of affairs where meaningful introspection is impossible. Unchecked, technology will race forward. We will have Daly’s Infinity, or something like it, before long. More than this, horror in Black Mirror often comes from the realisation that the technology turning on Brooker’s version of us is something that we will have asked for. We invite the wolf into our homes. It’s not much of a leap, if you understand the power of fantasy, to empathise with Daly – desiring and achieving absolute control, meting out justice in a universe at his beck and call, and all (ostensibly) without consequences. If there’s a unifying theme that binds each episode of the anthology series together, it is our collective and wilful blindness. Charlie Brooker explained the choice of his name for the series: when the images on a screen are extinguished, we are suddenly confronted with our own reflection, upon and – as though – within the world we were so recently peering into; a Black Mirror indeed. 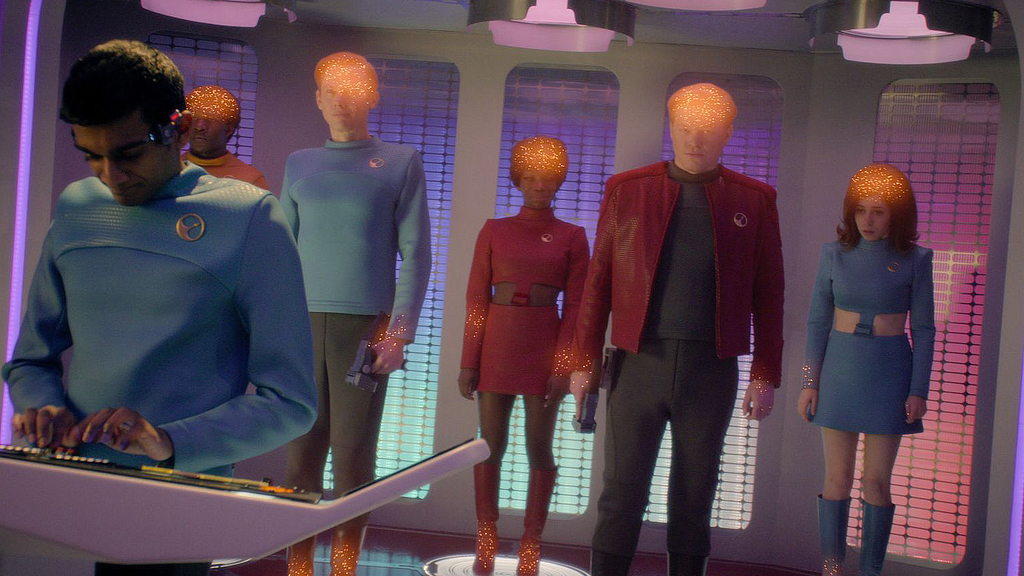