Bad Boy For Life: Duality in the work of Noah Davis

Noah Davis, who sadly died of cancer in 2015 at aged 32, left behind over 400 paintings, collages, and sculptures. With his wife, the artist Karon Davis, and his brother, artist Kahlil Joseph, Davis cofounded The Underground Museum, a Black-owned-and-operated gallery in Arlington Heights in LA. 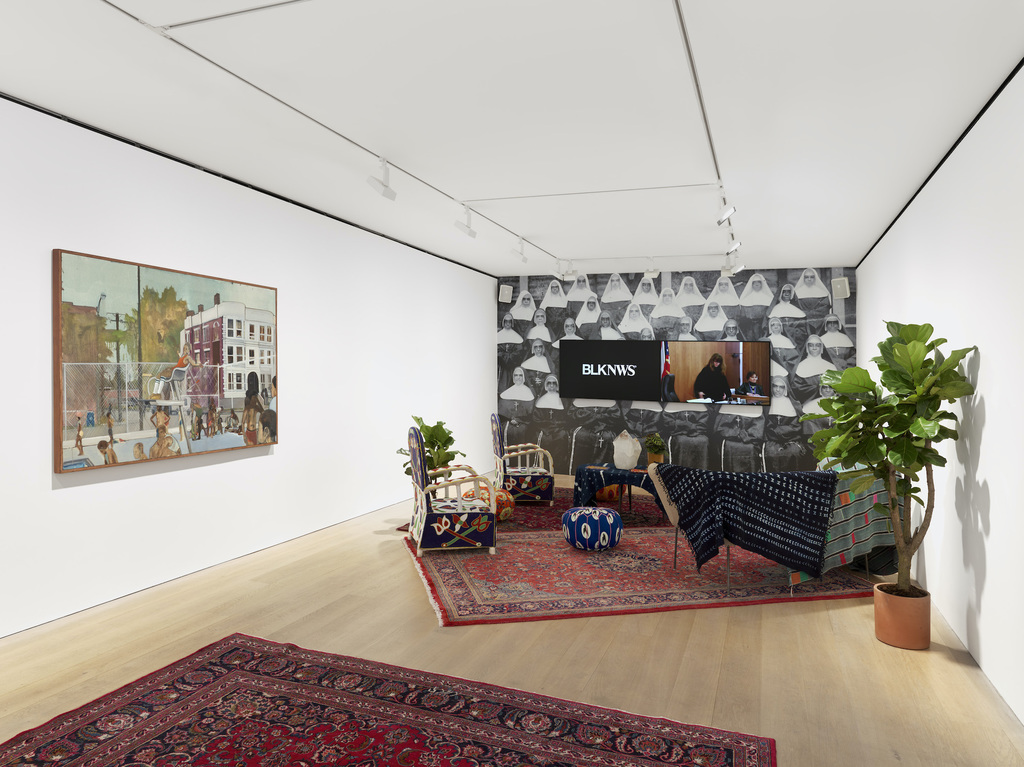 The Underground Museum’s ‘backroom’ has been recreated at David Zwirner London as part of an exhibition of Davis’ work organised by Helen Molesworth. Also on show is a sculpture by Karon Davis, furniture designed by Davis’ mother and a screen showing BLKNWS by Kahlil Joseph. This communal feeling echoes something of the generosity that Noah Davis displayed in life; yet his work so often depicted solitary figures. So often, he painted, as Leah Ollman put it in a review when the artist was still alive, ‘with the chromatic and emotional palette of an old soul wanting to reconnect with something lost’.

"there wasn’t a tragic bone in the man’s body" 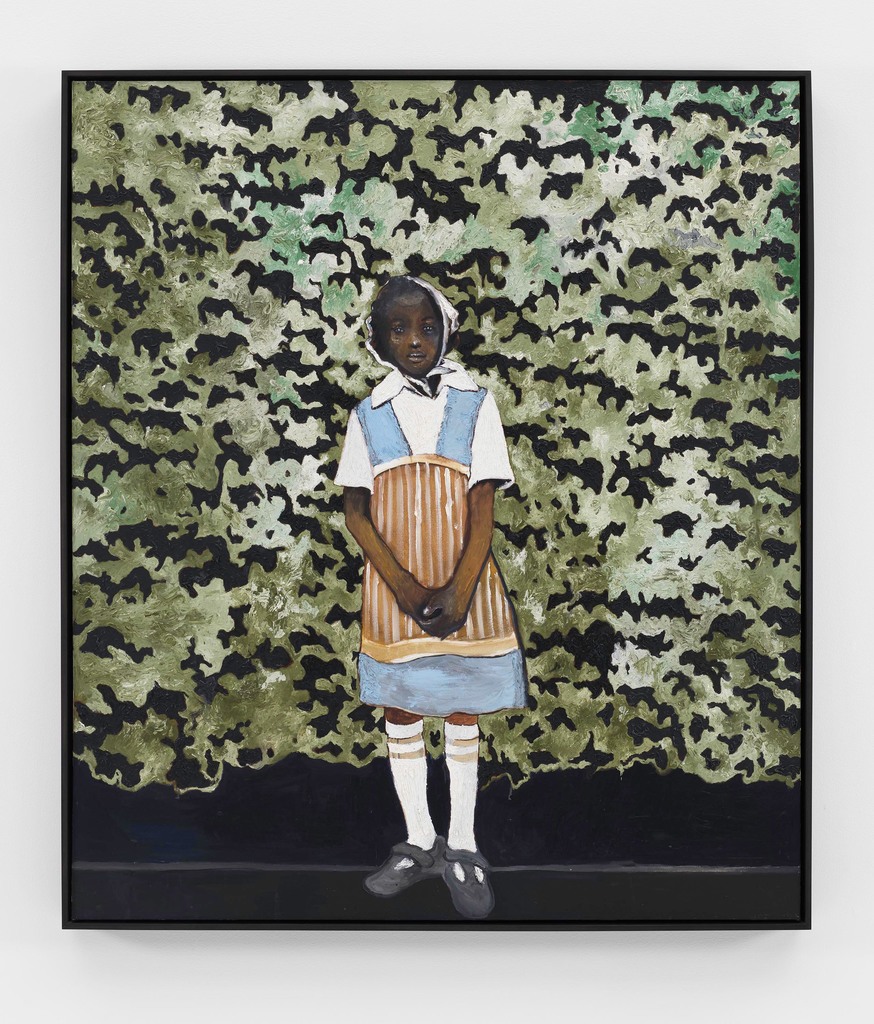 It’s all too human to want to connect with a great talent, who you can’t help but feel, would have gone on to achieve so much more. But Molesworth would warn us not to get too swept up in such heady emotions. Introducing the New York iteration of the exhibition at the beginning of 2020, the writer and curator said, ‘there wasn’t a tragic bone in the man’s body’. 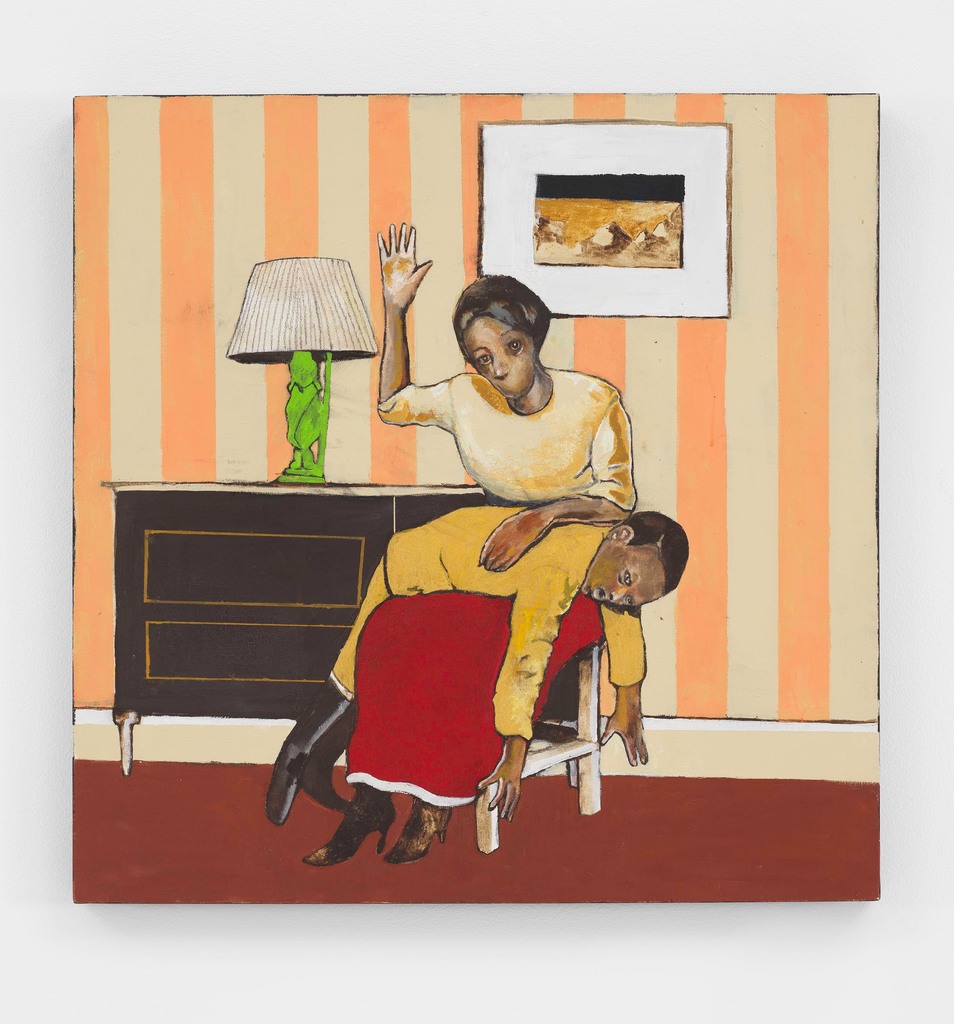 If his titles are anything to go by, he had a wry – if dark – sense of humour. ‘Mary Jane’ (2008) refers both to a meek little girl in white socks and sandals and her busy, cannabinoid backdrop. ‘Bad Boy for Life’ (2007) shows a young boy over his mother’s knee, her hand raised; yet, everything, from the striped peach wallpaper to the framed mountainscape on the wall and the lurid green lamp clashing with the mother’s loud red skirt seems designed to distract us from this disturbing scene of punishment, enacting the ironic shrug of the title: sometimes, you just deal with the hand you’ve been given, pun intended. Hanging between these works is ‘Brown Catholics Eating Blue Hearts’ (2008) – blue hearts functioning as a pun on religious ecstasy and the stuff made in a lab? 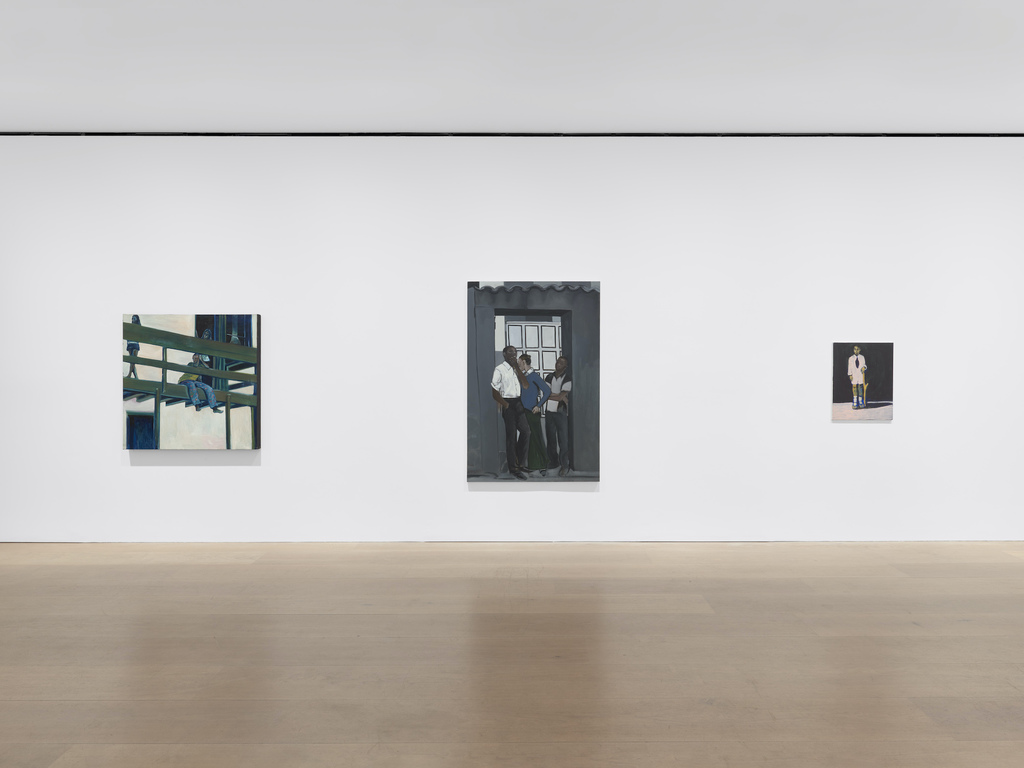 ‘While the tale may be tragic,’ Molesworth continued, ‘it’s a framework for thinking about the work I refuse’. Thus, as in New York, so in London: the work is hung in non-chronological order (unusual for the curator) to prevent the viewer from getting swept up in linear time. It’s something that Davis’ paintings encourage us to do, too. They toggle between chronicle and fable as compellingly as a daydream. ‘Another Balcony’ (2009) appears as a snapshot observed from street level, looking up at, sure, just another balcony, with a boy dangling his bare feet off the edge – but does the indigo flush of things suggest something more solemn, less concrete, imagined?

"Davis’ penchant for blurred, distorted faces forces us to second guess ourselves, to look again" 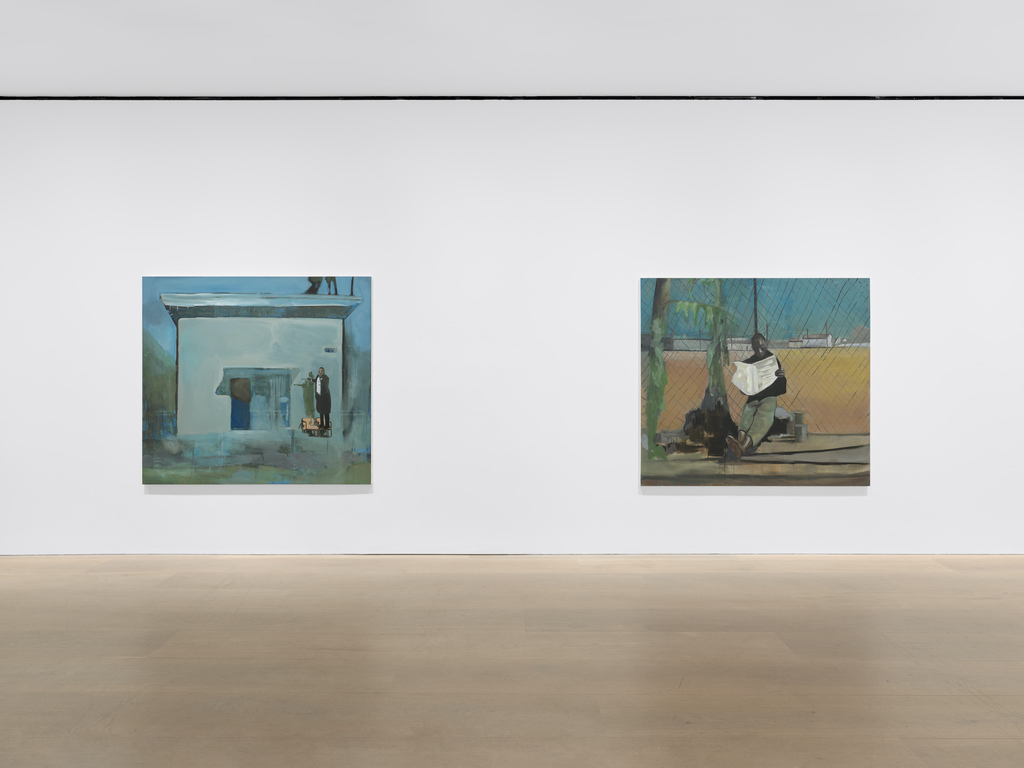 Likewise, ‘Pueblo del Rio: Vernon’ (2014) with its chain-link fence and distant telephone lines, demonstrates Davis’ continued exploration of Black bodies in the built environment (as a corrective of that which is ‘missing from the canon’, as Karon Davis put it recently). As the man leans back against the fence, reading the newspaper, the scene seems as simple and quotidian as this act. But Davis’ penchant for blurred, distorted faces forces us to second guess ourselves, to look again; the viewer is invited to project herself into the scene. Is the man as content as he at first seems? Or is the honey-hued tarmac behind him a sleight of hand? Might he, for instance, be lonely or down on his luck?

"This communal feeling echoes something of the generosity that Noah Davis displayed in life; yet his work so often depicted solitary figures" 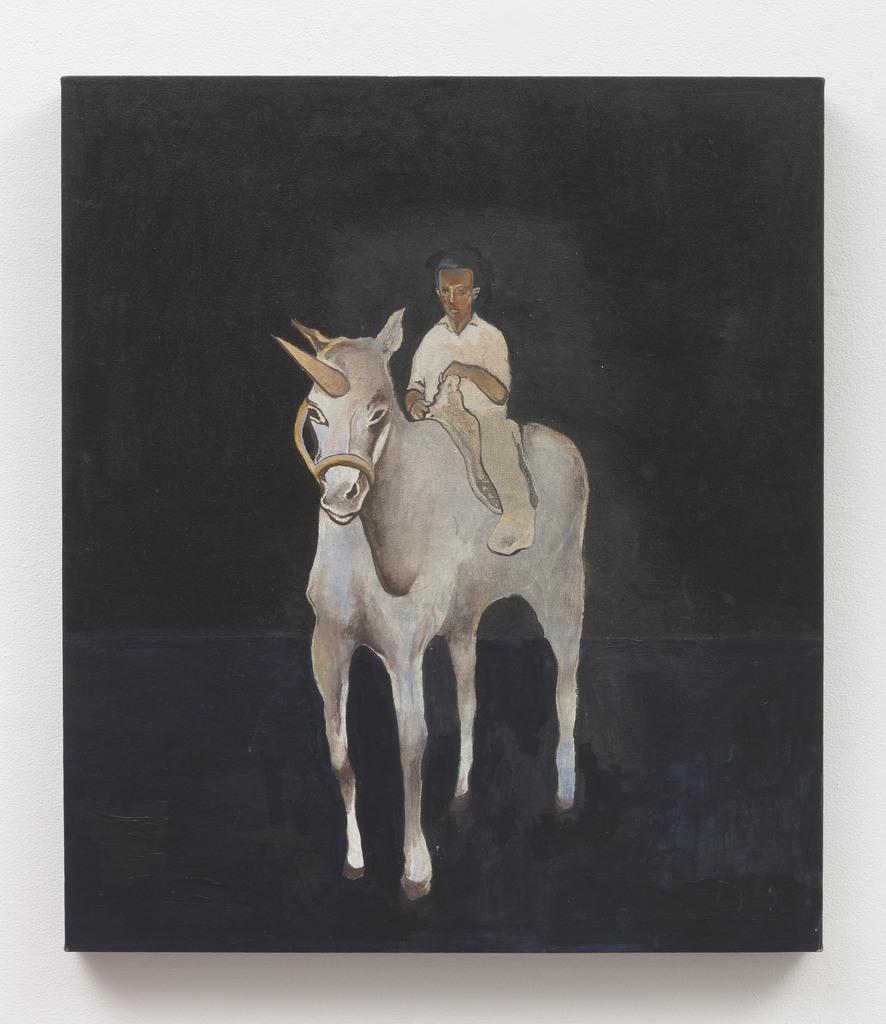 If this portrait invites a thinking of interiority, then the work hanging to its right could almost be its thought bubble. ‘40 Acres and a Unicorn’ (2007) is a fantastical scene unfolding in a dark vacuum. The boy atop the glowing mythical animal looks lost, troubled, while the title refers to the Civil War era promise of land (no larger than 40 acres) and a mule to families freed from slavery. Would it shock you to learn that this promise was never made good on? Though it’s become almost cliché to invoke Jordan Peele’s ‘sunken place’ as a metaphor for the experience of being marginalised (‘No matter how hard we scream, the system silences us’, Peele explained in a 2017 tweet), it’s hard not to think of it here.

Yet, Davis’ work always manages to find humour and lightness in the face of despair, comedy in tragedy, and in his lonely tableaus we somehow experience togetherness. Doubleness can read as nuance as well as double entendres.