South Africa’s staggering landscapes do not go hand in hand with the brutal ugliness of its storied past. The scars of colonialism, apartheid and interminable corruption run deep even today and as such, South Africa’s artists have often struggled to escape the at times cloying categorisation of ‘politicised art.’

After all, what stronger driving force towards creation than asking “why?” 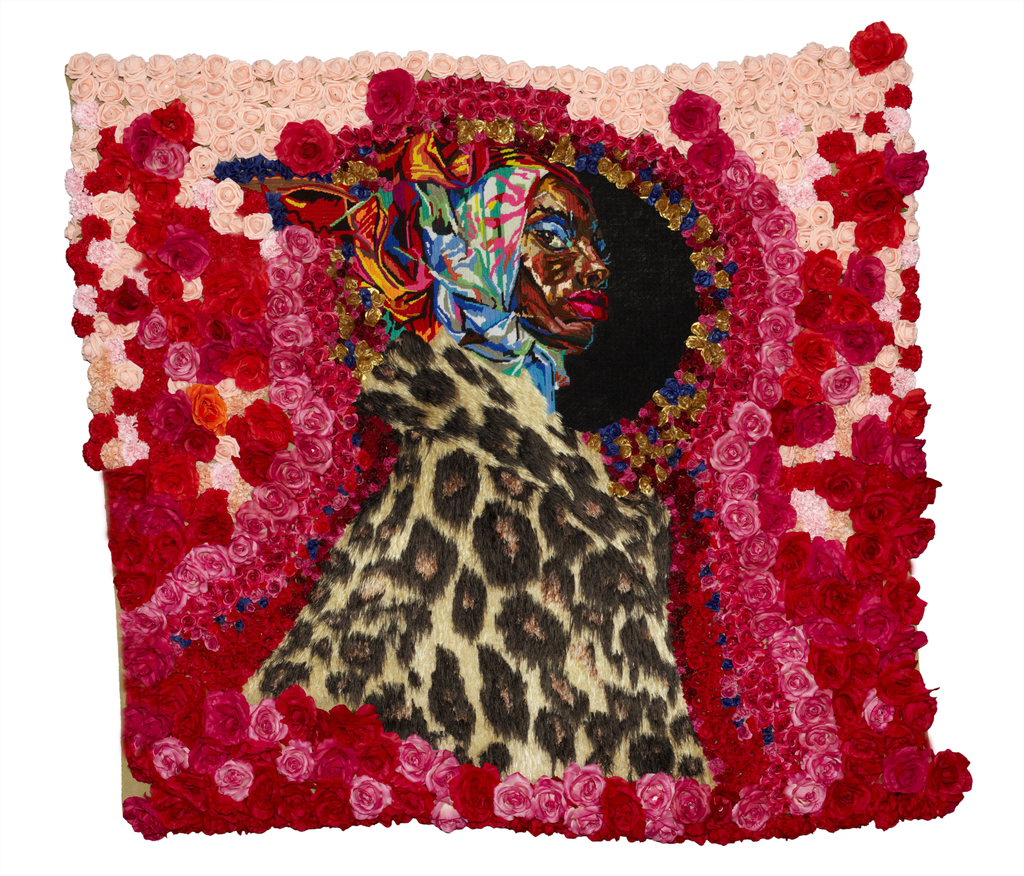 Take Nadine Gordimer, white South African novelist who won the 1991 Nobel Prize for Literature. Yes, her books explore the possibility of racial co-existence in post-Apartheid South Africa. Yes, the lead-heavy burden of a white person’s guilt runs throughout her novels. Yet she was ‘not political enough,’ said her critics. Backtrack a few decades and the idea of ‘art for art’s sake’ was deemed impossible by Senegalese theorist and then President, Léopold Senghor. In his seminal post-colonial writings, Senghor argued that in black Africa, “art is functional.” In the recent history of a continent where the struggle to assert an African identity was synonymous with rebellion, civil war and heinous loss of life, art has remained staunchly allegorical. After all, what stronger driving force towards creation than asking “why?”

Fast forward to present day Somerset House, housing Athi-Patra Ruga’s kaleidoscopic ‘Of Gods, Rainbows and Omissions’ until January 6th 2019. It’s the South African artist’s first major solo UK exhibition, but his list of art-weighty accolades includes shows at the South African pavilion in the 55th Venice Biennale, Louis Vuitton Foundation and Bilbao’s Guggenheim Museum. Ruga’s work is saturated with the search for identity in post-Apartheid South Africa – yet, at the at same time, he manages to sidestep the creative restraints which a strictly political agenda would impose. On the contrary, Ruga’s collection of richly detailed tapestries, ornate sculptures and film work strikes the perfect balance between an engaged response to world events and sumptuous visual feast. 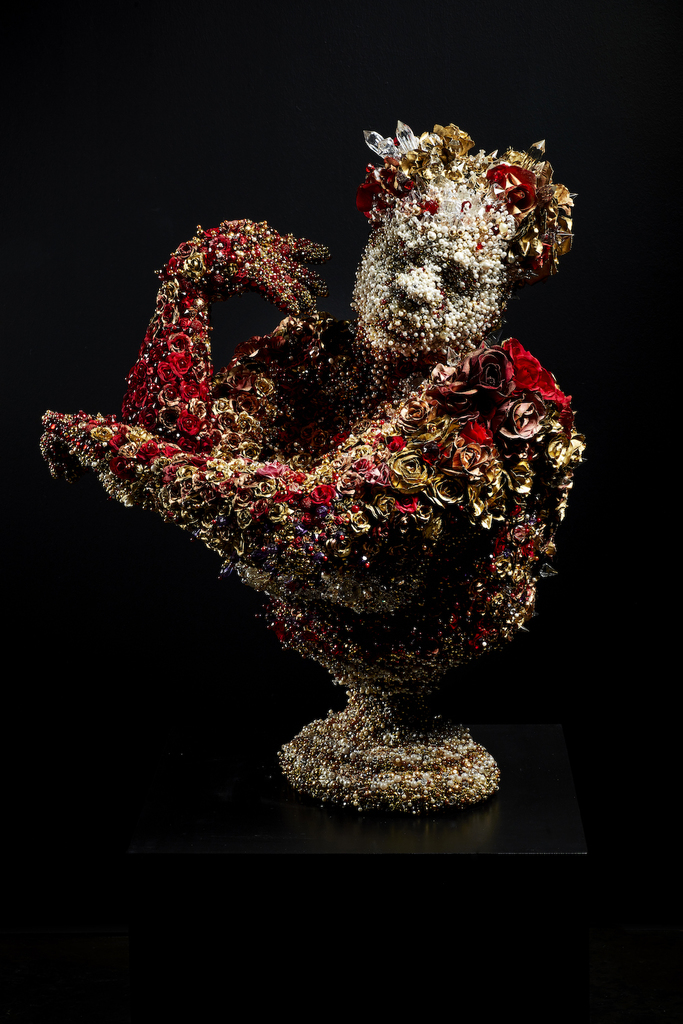 Enjoy it intellectually: there’s queer theory galore, nation-state satire and feminist matriarchy to sink your teeth into. In Ruga’s dazzling (and at times bewildering) universe, female legs in lipstick shades cluster between the grossly oversized leaves of a cheese plant, spray-painted an ostentatious gold. This is no Columbia Road flower market. Nature is rainbow-hued and in your face, divorced to the furthest possible point from its source of production. Natural order? Forget it. Grappling with Ruga’s intense allegory, I surrender to the logic of his overflowing universe which moves too fast for me to object. It’s loaded with multi-referential symbolism, flitting between subjects and stories including South African history, Senegalese dancer Feral Benga, and Ruga’s own fashion background. Interrupting our usual way-of-being wherein analysis, assessment and corresponding significance equate to monetary and social value, the sensation of taking your foot off the gas is liberating; delicious. Take from this what you will.

Ease into a tapestry depicting a loosely recognisable map: is that East Africa? West? In reality, it’s neither. A riot of brightly coloured threads reapproriate African Geography, laughing along with their cartographer’s dark humour. What would be Namibia is the new Sodom, Ethiopia is naughtily renamed Fellopia and Kuntistan stands in for Kenya (a spectator’s guess.) Ruga’s provocative map takes a laconic shot at colonialism before turning to scream in the face of homophobia, its vivid seven-colour scheme a sarcastic retort to Archbishop Desmond Tutu’s assertion that South Africa is a “rainbow nation.” Uttered in 1994, these words were supposed to announce a unified and diverse South Africa. The phrase becomes putty in Ruga’s adept hands, more fuel to his irreverent and furious fire. 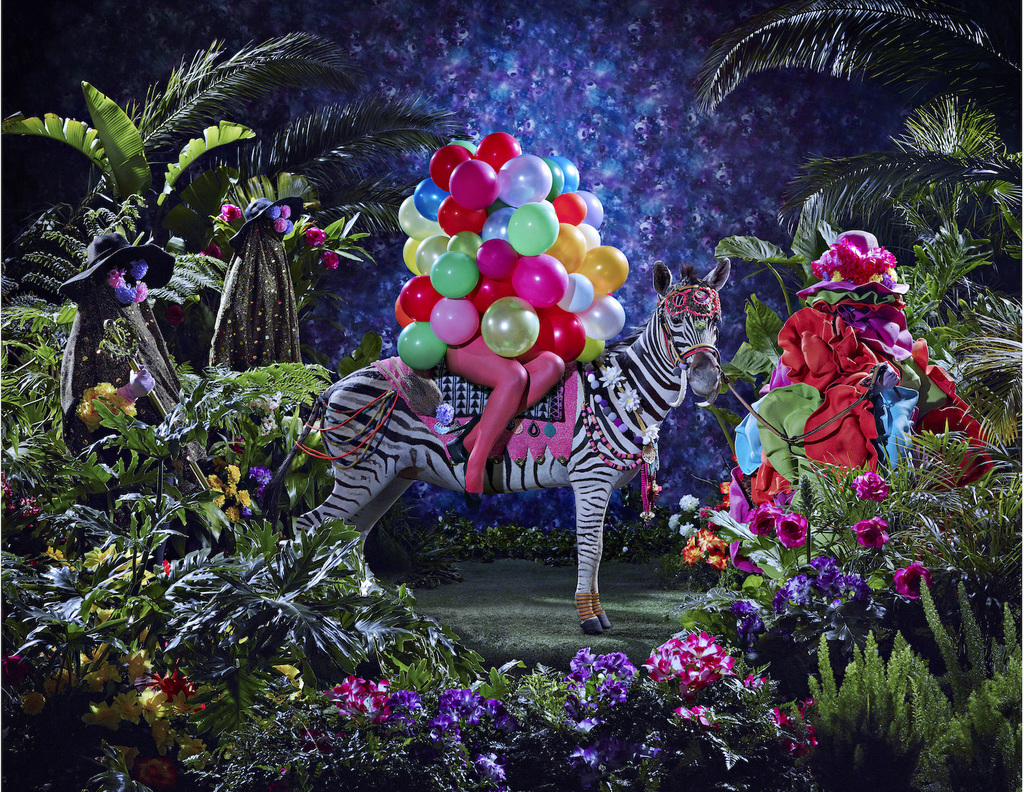 This witty reimagining of the African continent is just the beginning of Ruga’s fantasia. Temporally splicing in two, his series The Future of White Women delves into annals of the past. Selecting a Greco-Roman toponym to imagine a futuristic South Africa, and moving from one trapezoidal tapestry to the next, Ruga depicts a new era amidst the ancient realms of Azania. It’s a place-name coined millennia hence by Pliny the Elder, and today it’s the stage onto which Ruga projects his fierce female protagonists. These recurring characters sit astride sabre-toothed zebras, the fearsome potential of their protruding teeth completely undermined by the animal’s candy-coloured decorations – iconic zigzag skins are bedecked with decorations fit for an elephant at a Hindu wedding. It’s like the South African edition of a Mad Hatter’s tea party, featuring a marzipan zebra as the table centrepiece.

Everything is joyfully, provocatively out of kilter. It is against this backdrop that the stories of black queer women are labelled as those of white ones: titles of well-known art works become increasingly difficult to match with their new, Azanian incarnations. The more you read, the more confusing it all is – and, ever playful, Ruga’s imparting a message. The zebras’ confectioner costumes subvert South Africa’s post-Apartheid divisions. Black and white, reductive racial or moral constructs, are revealed to be self-defeating. Ruga hijacks one deceptive binary after another – African or Western, gay or straight, male or female – and eclipses them beneath a utopian vision, larger than either side of any coin. 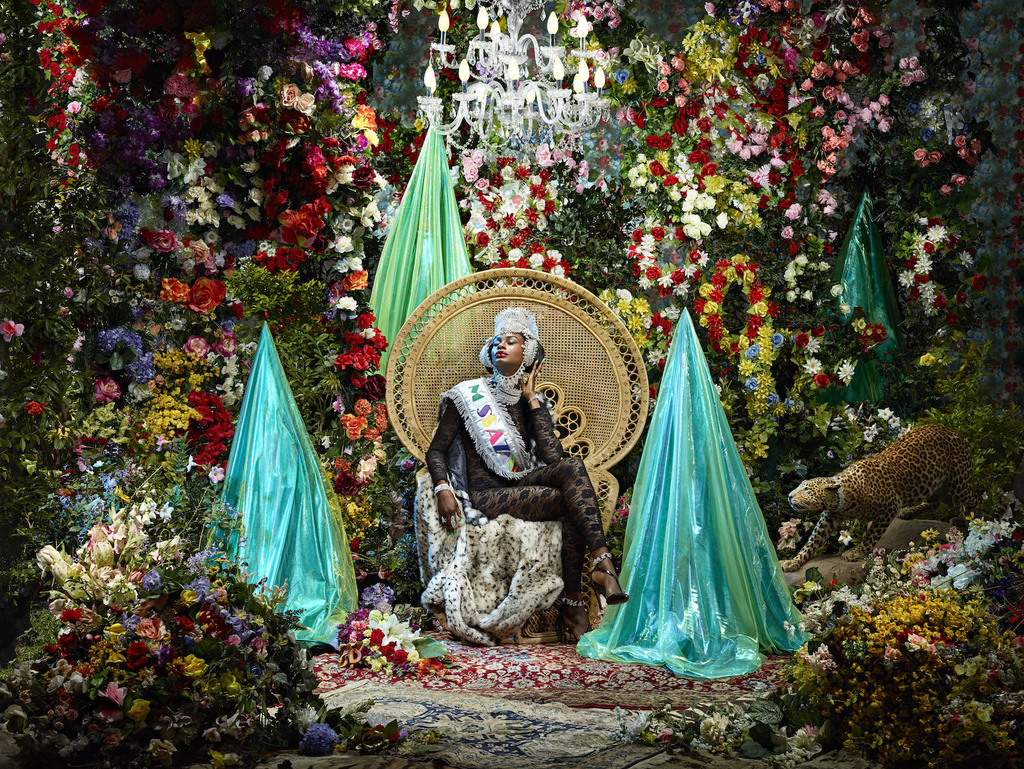 Ruga’s recourse to mythology might be more symptomatic of a drive to escape than cultural critique: the conjuring of a safe (if surreal) space to retreat and lick personal wounds. Even so, what better place to fire shots from than the brightly coloured utopia of Azania? Populated with his avatar-like creations, omnipresent Ruga can forge identities anew and away from blinkered, pre-determined gender roles or toxic race relations. Azania is a special place: crumbling myth, revived by Ruga’s ambitious matriarchs, and historically fertile ground – it’s steeped in legend of its own. For South Africa’s post-apartheid activists, Azania was held up as a symbol of unity in the face of division. 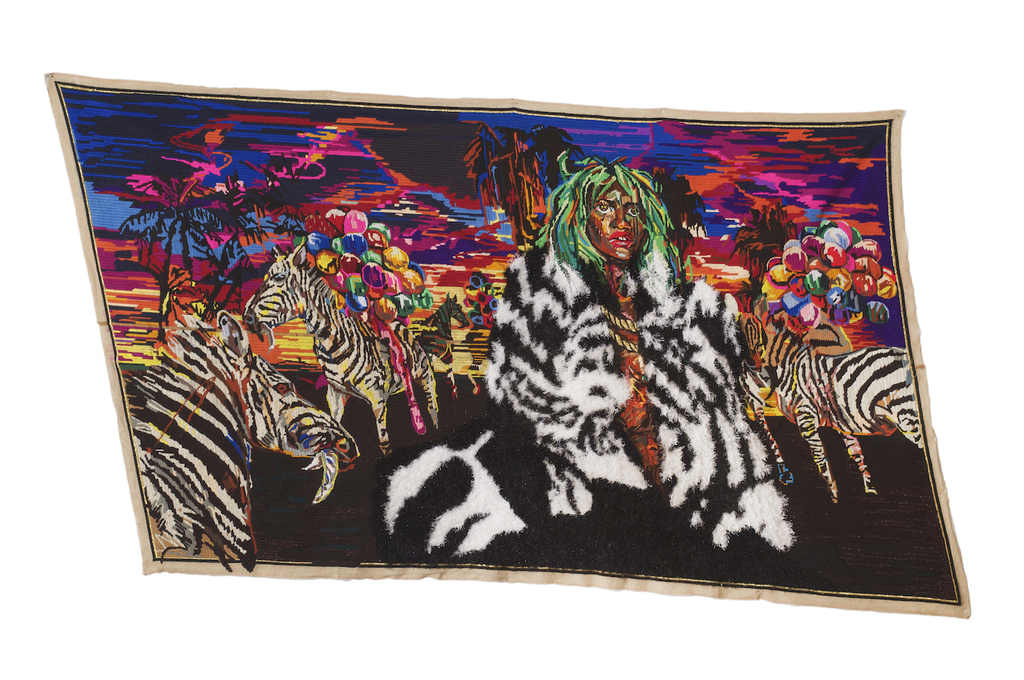 Speaking of symbols: a giant crest of arms looms ahead, set upon another impossibly detailed tapestry. It features the German motto “Nihil Reich” (no realm), emblazoned at the hooves of rearing zebras. Shouldering the history of the Third Reich whose spores made their way across the sea to South Africa, the message behind the tapestry’s symbolism is clear. No realm, not for Ruga. No limits, and no omissions. Aspiring to transcend race, sexuality, gender and history itself, Ruga’s utopia reverts to the literal meaning of the word: no place, but here.