The Collision of Art and Economics

Benedict Drew: The Trickle Down Syndrome at Whitechapel Gallery consists of five immersive spaces, bent on making physical the intangible notion of trickle-down economics. Drew’s furious, but operating with a light touch. Rather than hammering his message home with slogans or clunky visual metaphors, he plunges the viewer into a world in which trickle down economics has taken hold, a disconcerting and unnavigable space, to illustrate his agenda. The theory of trickle-down economics evolved in the 80s, and posits that – incredibly – the richer the rich become, the better for all of us. Their wealth will find its way into our pockets by means of circulation; they’ll invest in our start-ups (ha) and keep our family businesses afloat with their generous custom (bankers shop at corner shops, don’t they?), and so society as a whole benefits. I don’t need to tell you that this theory has been solidly debunked, because you’ll have noticed by being alive.

I don’t need to tell you that this theory has been solidly debunked, because you’ll have noticed by being alive. 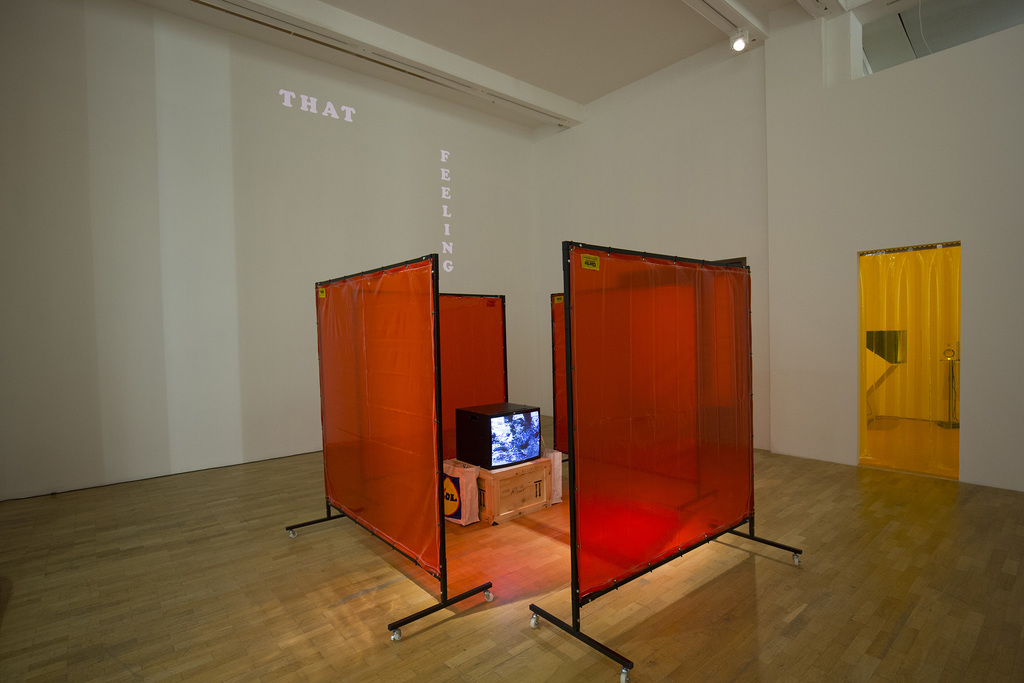 ‘The Trickle-Down Syndrome’ conjures up a dystopia wherein its namesake economic policy is seen through to its natural conclusion, and it’s ugly; chillingly, it doesn’t induce a lightning-bolt wake-up call so much as a ‘sure, yep’. In fact, what’s outside the gallery is more upsetting than what’s within. I’m writing in the wake of countless upheavals and disasters in the UK, its capital and beyond: Brexit, Grenfell, Manchester, Westminster Bridge, London Bridge, Finsbury Park, not to mention a hung parliament led by a government propping up its mandate with creationists, anti-abortion campaigners and homophobes. The NHS is buckling, and so are our state schools and police force. Quite suddenly, and perhaps more than at any time in a generation’s memory, we have seen the brutality of poverty, societal alienation and polarisation which comes from austerity rather than investment, from hoarding money at the top of the tree at the expense of the lower branches. We’re at breaking point; depending on the headlines of the day and how optimistic I’m feeling, I waver between gleefully welcoming the socialist revolution and despairing as the country I was born into turns it back on all but Apple and Starbucks. Political art generally functions by showing us where we’re headed before we get there; in the case of this exhibition, we’ve arrived.

We’re at breaking point; depending on the headlines of the day and how optimistic I’m feeling, I waver between gleefully welcoming the socialist revolution and despairing as the country I was born into turns it back on all but Apple and Starbucks. 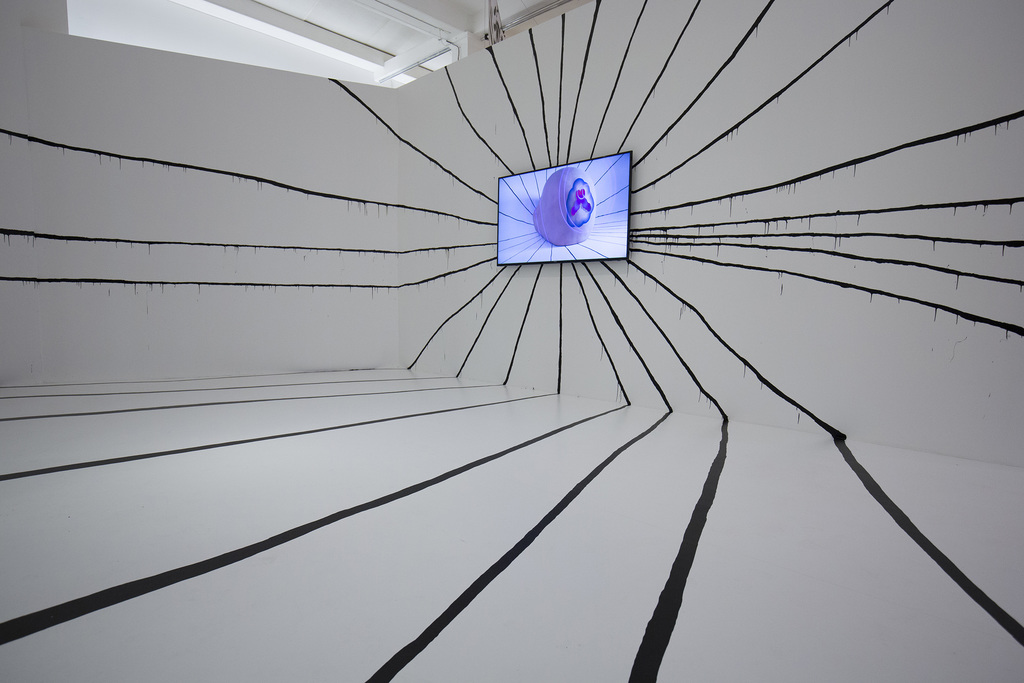 Drew explains that he is ‘interested in the feeling of submersion in social and environmental despair, being overwhelmed by images, confused by the shifting status of objects, disoriented by layers of history.’ Submersion feels apt – the exhibition begins with a screen set on a wall, hand-drawn lines radiating from its edges and extending across the floor and round corners. Depicted is a kind of amorphous blob, pulsating to the electronic music which follows you through the whole space. It’s a collision of organic and digital, which is an apt metaphor for how consuming the onslaught of calamity after calamity can feel. Although, for most of us, the tragedies listed above take up an enormous amount of brain-space and emotional energy, they’re not things which touch us directly. We’re at odds with how to compute the news that an eight-year-old girl died in an explosion after seeing her favourite pop-star. How to process? How did this happen? We don’t hear this through people who knew her, as we might have done a century ago. Now, we see this on Facebook, sandwiched between a sponsored post for a new facemask and a friend’s birthday update. We are alienated, distracted; digital and organic aren’t natural bedfellows, but they are an increasingly familiar combination.

Moving to the second space, the largest in the exhibition, we find ourselves stood in front of what feels like an altar. A gong vibrates towards its back, and two television screens featuring an actress discussing economic policy play on a loop, her voice interrupted by the bings and pings of Drew’s soundtrack. We can’t hear properly, outside or inside the gallery, but at least here we can recognise the interruption. Two elongated eyeballs, made out of what looks to be papier-mache, are drawn along the platform’s raised floor, looking out in both directions but with no brain or computer to transmit their visual signals to. They’re redundant – not unlike our own passive consumption of earthshattering updates. 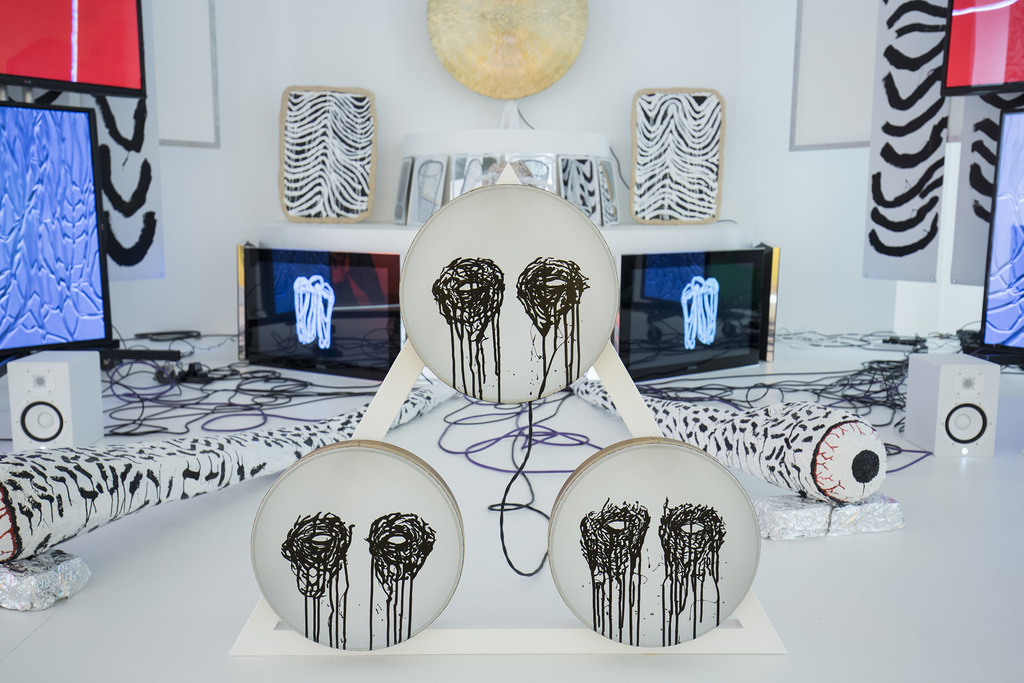 My favourite room of the exhibition is its last – a kind of library/office, where I settle down to listen to ‘Crawling Through Tory Slime’ on a record player, while reading an eponymous piece of prose – a manifesto? Speculative fiction?

‘And during the long days of generating viral content as Volunteer Community Engagement Ambassador for Greggs, followed by the long evenings of moving up through the brutal ranks of the local Cash Converters intern tribe, you create a picture in the starving theatre of your imagination. Something to work for. A private heresy. A palsied model of your world-to-come, roosted in arid grounds. / You recollect an image: a boot stamping on a human face, forever. But this doesn’t fit on your CV. It lacks the ambition and resourcefulness of the modern citizen.’

Here is something to hold onto. It’s funny, in a black-humour kind of way – and it’s familiar. A lot of people, especially the much-maligned millennial generation, can relate to the treadmill-cum-quicksand of maximum work for minimal reward. We should be grateful to have a job at all, we’re told. An internship at Cash Converters might be cut-throat, but you should count your blessings for the opportunity. Har de har. The situation laid out above is farcical, but it resonates because it’s within reach. We have reference points for the panicky aspiration, the self-chastisement and hamster-wheel of Achievement, compounded by the perpetual visibility of lives lived in the digital age – another recurring theme of ‘The Trickle-Down Syndrome’, in which screens and MTV hyper-saturated colours proliferate. Comparison with your peers – people you would otherwise have lost touch with on leaving primary school, or after one late night at someone’s birthday – is almost impossible to avoid, and nearly as hard to bear. There is always someone better, faster, stronger, brighter, especially if they can elect to only show you the shiny bits. There’s a ring of Orwell’s Thought Police to the extract, too. Squash that idea: it doesn’t fit the agenda – or your CV, which is all you are. More than this, screens keep us busy; keep scrolling. It’s a lovely way to spend the commute.

There is always someone better, faster, stronger, brighter, especially if they can elect to only show you the shiny bits. 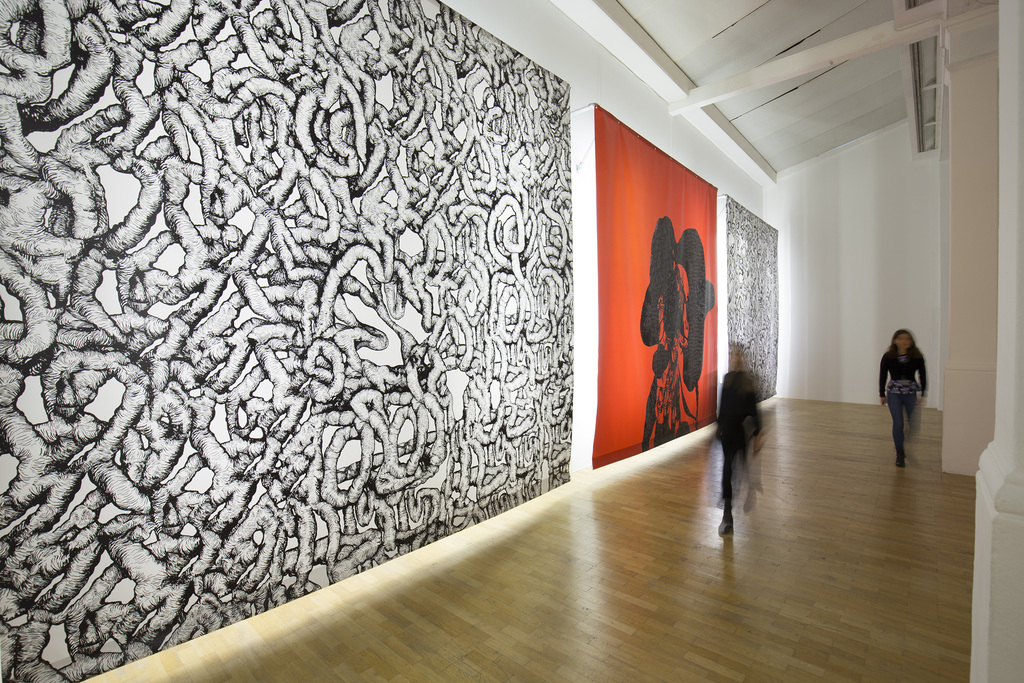 In this final room, Drew’s ideas from the rest of the exhibition find their resolution. Books sit around the walls, a kind of activist/artist’s reading list. The writing (by ‘Dane Sutherland’) and the record feel self-assured, a crystalised articulation of the issues Drew manifests in the remainder of the show. They’re no more optimistic, but it's not an artist's role to provide hope. After our intentionally bewildering and unsettling experience of the first four rooms, there’s clarity to be found in Sutherland's rousing words. Crawl though Tory Slime to the other side – follow me!