Devotees arrived at the Fashion and Textile Museum with pink hair, pink accessories, floral prints and tough footwear, for a tour of ’50 Years of Fabulous’ a celebration of five decades of design by Dame Zandra Rhodes. Creator of possibly the most desirable live/workspace in London, Zandra Rhodes now lives above the museum – a converted 50s warehouse on Bermondsey High Street designed by the legendary Mexican architect Ricardo Legorreta. “We should all be more Zandra,” seemed to the collective thought bubble above the assorted journalists gathered inside.

“Zandra happens to work in fashion and textiles but is actually a pop artist – she could easily have been a painter or a sculptor,” Denis Nothdruft, exhibition curator. 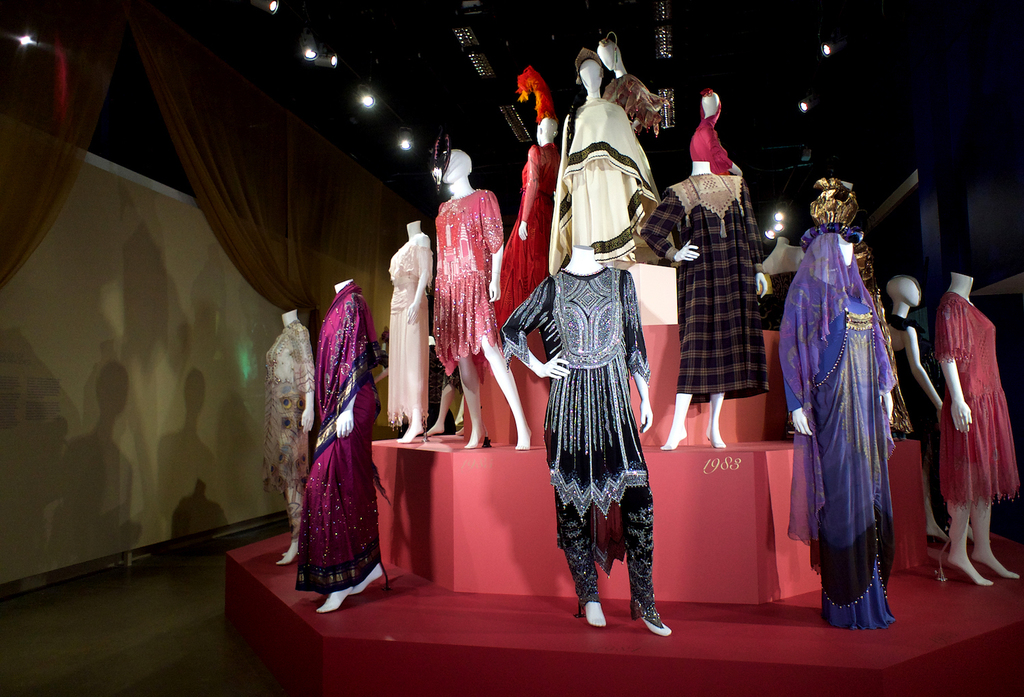 The exhibition features designs worn by Freddie Mercury, Barbra Streisand, Elizabeth Taylor, Debbie Harry and Kate Moss. More recently Pierpaul Picolino of Valentino turned to Zandra for inspiration for his 2016 collection – knowing that she would be able to interpret his vision of dreamlike Bosch drawings within the framework of hot pinks and fuchsias that became her signature. He even rediscovered her very first textile print, a 1950s ‘lipstick print’ – which was also recently revived on a Matches jumpsuit – and is included in the exhibition, as one of the very first prints that Zandra designed in 1965.

“Zandra happens to work in fashion and textiles but is actually a pop artist – she could easily have been a painter or a sculptor,” explains exhibition curator Denis Nothdruft. The Royal College of Art was the centre of art and design during the Sixties – producing people like David Hockney, Derek Boshier and Zandra Rhodes – and it was a very interdisciplinary place, where everyone hung out together. When Zandra graduated in 1965, she was already producing patterns and selling textiles to other designers – and this gave her the impetus to set up her own company. 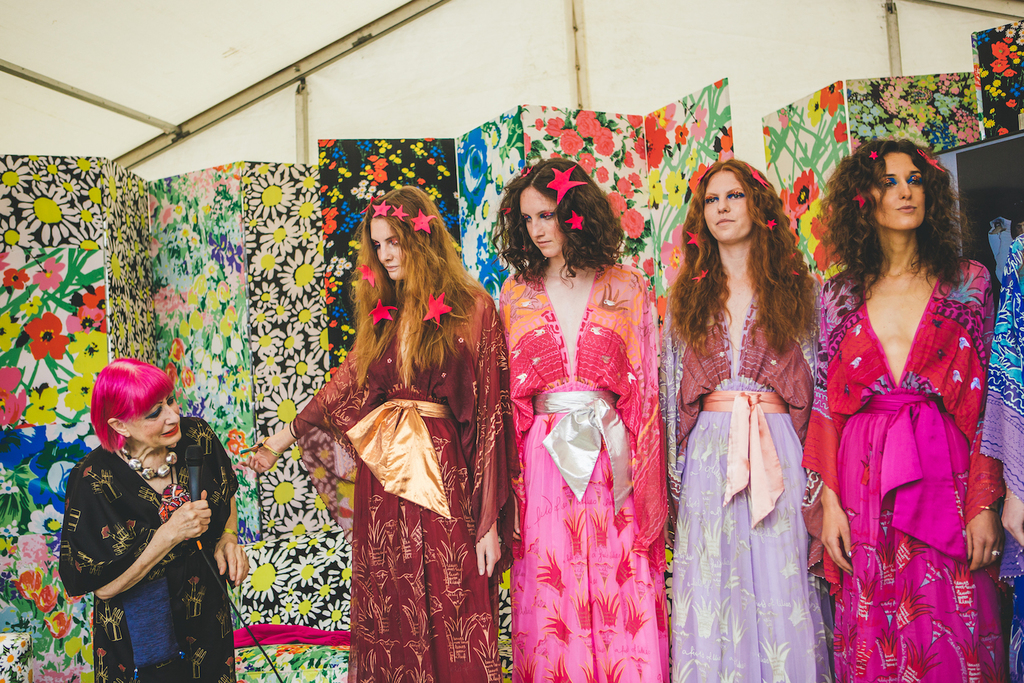 A short walk from the Royal College is the fantastic resource of the V&A Library – where Zandra studied drawings of knitting stitches and knitted bedclothes when she was creating her very first collection in 1969 – Knitted Circles. “Zandra was trained the old-fashioned way,” explains Nothdruft, “where you have to sketch every day, and this becomes the basis of all the textile designs.” Zandra has carried on this practice for over 50 years and now has over 50 sketchbooks and one hundred trunks filled with clothes. “I keep it all - I’m a hoarder!” she laughs but this has become an incredible resource – with many of her prints, reappearing or reissued many years later. “You cannot take the pages out of your sketchbook,” Zandra tells us, “if you do a bad drawing you have to keep it to remind you not to do it again - or draw over the top of it – I’m always teaching students that.”

Zandra began experimenting with her own image during the 1960s by drawing kiss curls on her face and playing around with make-up colours, while also working with legendary hairdresser Leonard to try all sorts of things – gluing feathers to her hair and dying her hair green. 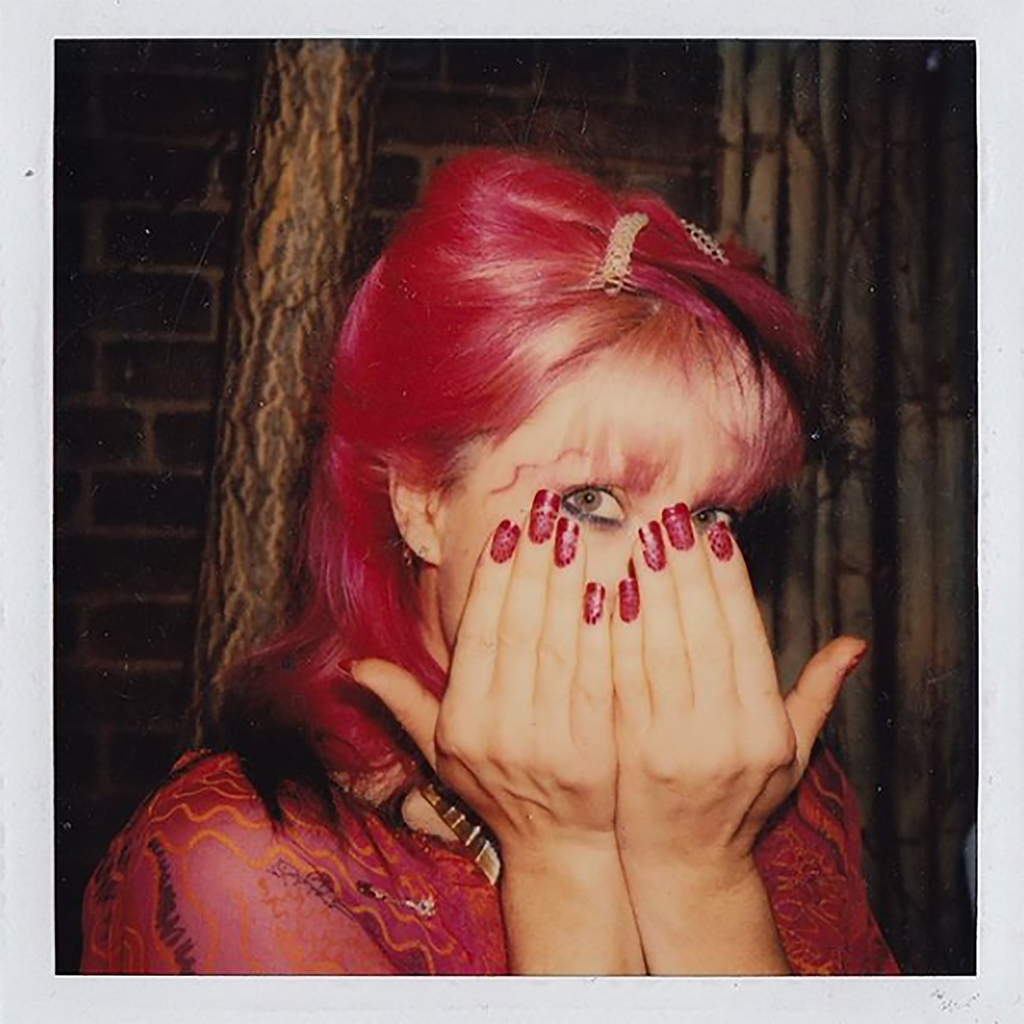 Zandra loves the performance element of her clothes and designed for Freddie Mercury on tour during the 1970s (and most recently for the Oscar-winning film), opera companies and Barbara Streisand concert in Hyde Park during summer 2019. Zandra began experimenting with her own image during the 1960s by drawing kiss curls on her face and playing around with make-up colours, while also working with legendary hairdresser Leonard to try all sorts of things – gluing feathers to her hair and dying her hair green. 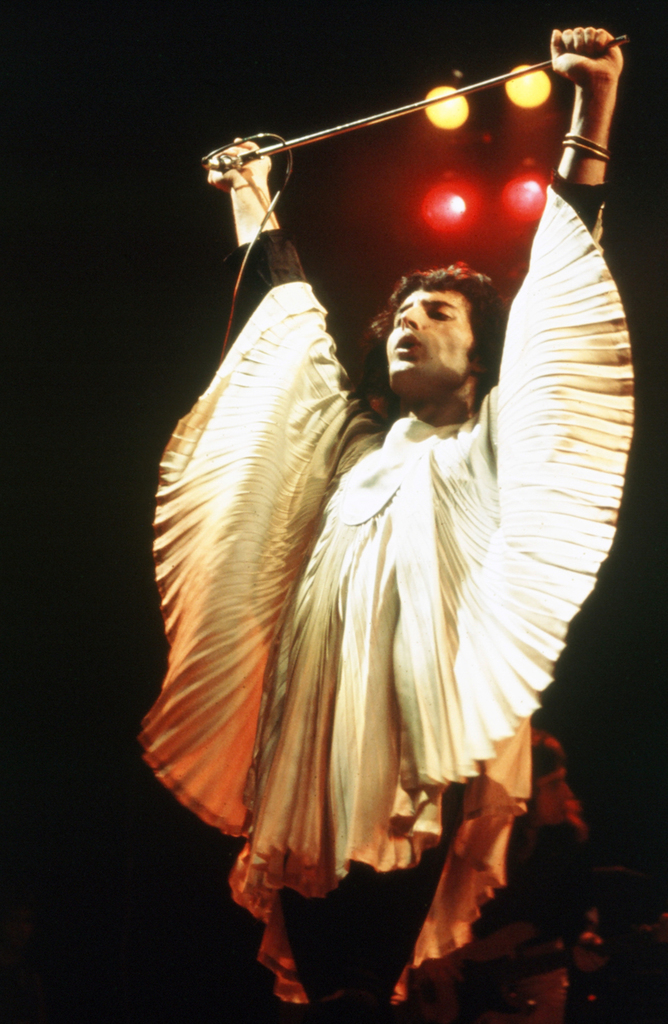 During the seventies, Zandra travelled to Australia, China and America – and her designs reflected this free-spirited Bohemian lifestyle. “Everyone kept saying you don’t want to go there,” Zandra told us when she became fascinated by Ayers Rock, “so I drove there in a four-wheel drive to the middle of the dessert – and drew the rock, the sun and all the grasses growing in front of it.” She remembers that in China there was no colour at all in 1979, and everyone dressed in navy blue, so she came home and made a red China collection, with dresses with pagoda sleeves. 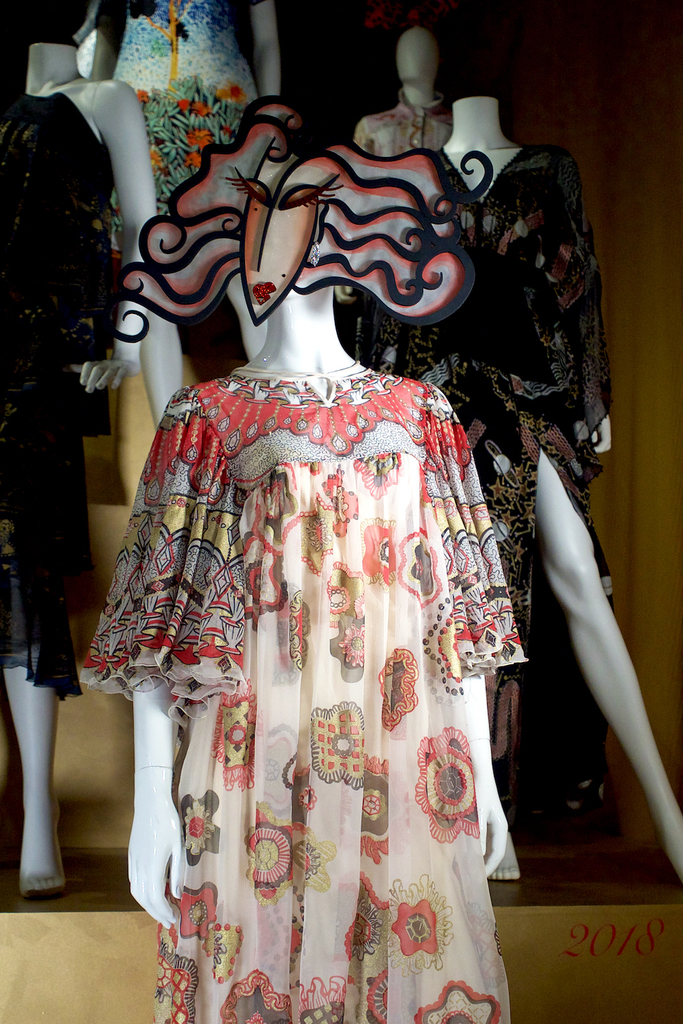 "I now wear flat shoes most of the time because the older you get your feet seem to say to you – hello flat shoes!! - And these are Ivanka Trump shoes!!” Dame Zandra Rhodes

For the launch of her exhibition, Zandra designed a new dress using her ‘Button Flower’ print from 1971, “I simply scaled it down with slightly smaller flowers and added a Jubilee frill.” Looking down at her feet, Zandra admits that, “I now wear flat shoes most of the time because the older you get your feet seem to say to you – hello flat shoes!! - And these are Ivanka Trump shoes!!” The splashy floral shoes went on sale in America, when Nordstrom refused to stock her line – so Zandra picked up a bargain. All of her jewellery is by her great friend, the jeweller and sculptor Andrew Logan. 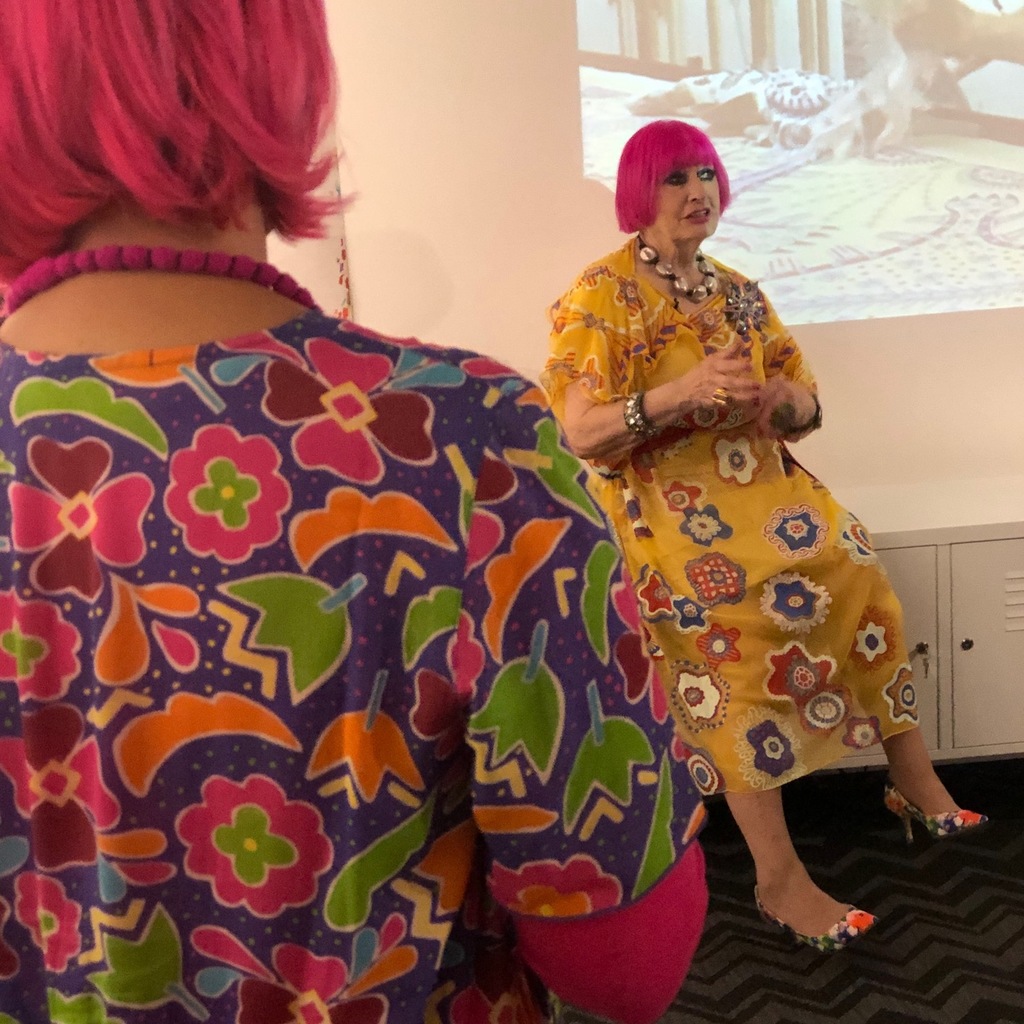 50 Years of Fabulous - Zandra Rhodes at the opening, wearing her 'Button Flower' print with 'Jubilee' frill.

This is the opposite of fast fashion – all of Zandra’s designs are made predominantly by hand – and frequently reused or recycled – bringing to mind the 2019 rallying cry of, ‘Recycle, Reuse, Reduce.’ Fifty years on, Zandra still embodies the radical art student energy of the 1960s – now apparent in a new wave of student activists, dying their hair green to protest against climate change….