Britain as Revealed by International Photographers 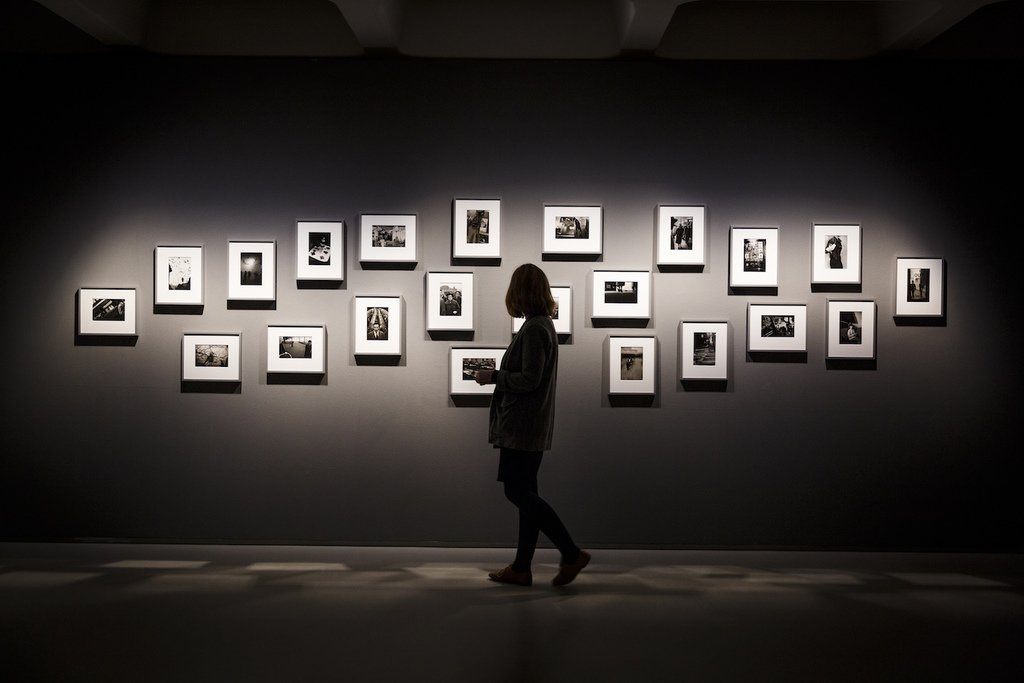 Britain through the 20th and 21st centuries looks variously destitute and glamorous, austere and like the best party you can imagine.

Strange and Familiar: Britain as Revealed by International Photographers gives an English girl a new perspective on her country and its history. Britain through the 20th and 21st centuries looks variously destitute and glamorous, austere and like the best party you can imagine. These impressions depend mainly on the era they were photographed – but also on who’s behind the camera, documenting it. 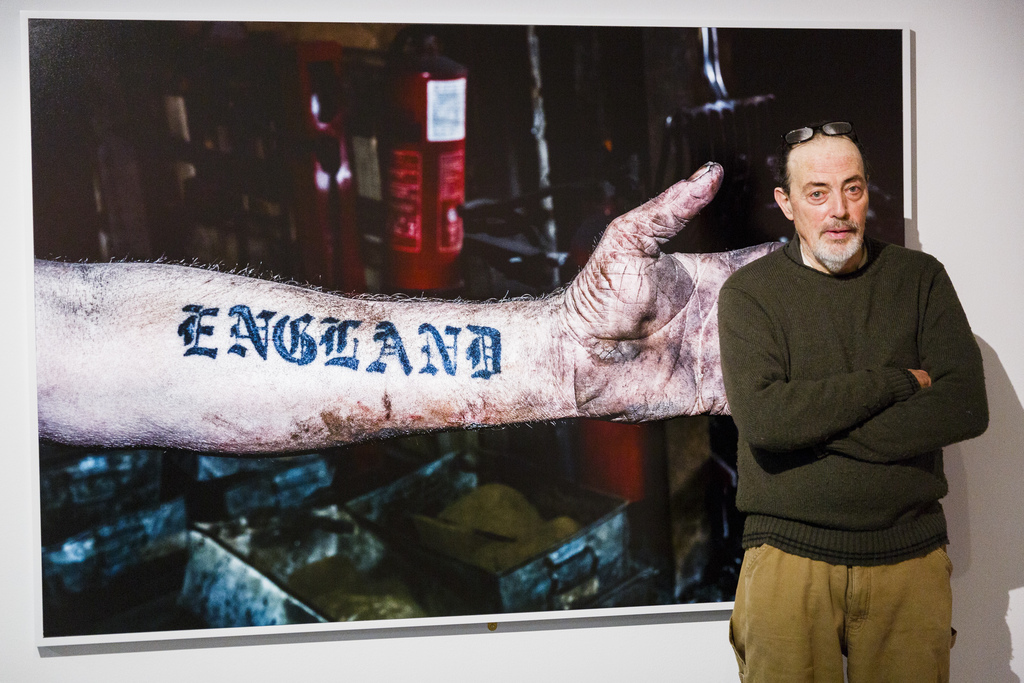 Henri Cartier-Bresson frames us as sincere, laughable in our earnestness at the Coronations, jubilees and balls of various English monarchs. An old woman perches, one haunch on each shoulder of two policemen who look like they’re trying to remember the austereness of the occasion. Her back is ramrod straight to counteract the indignity of her positon, but also to help her crane to see the new king, George VI, crowned in Trafalgar Square. Of course, Cartier-Bresson came armed with all the anti-monarchist scepticism of the French Republic, but he was also an ardent communist. At the time, this was a new, radical political theory which held all the promise of revolution and equality for Europe; the English, far from embracing a progressive way of seeing the world, were still living under monarchs as they had since time immemorial. Through l’oiel du siècle, we look quaint – we look absurd. 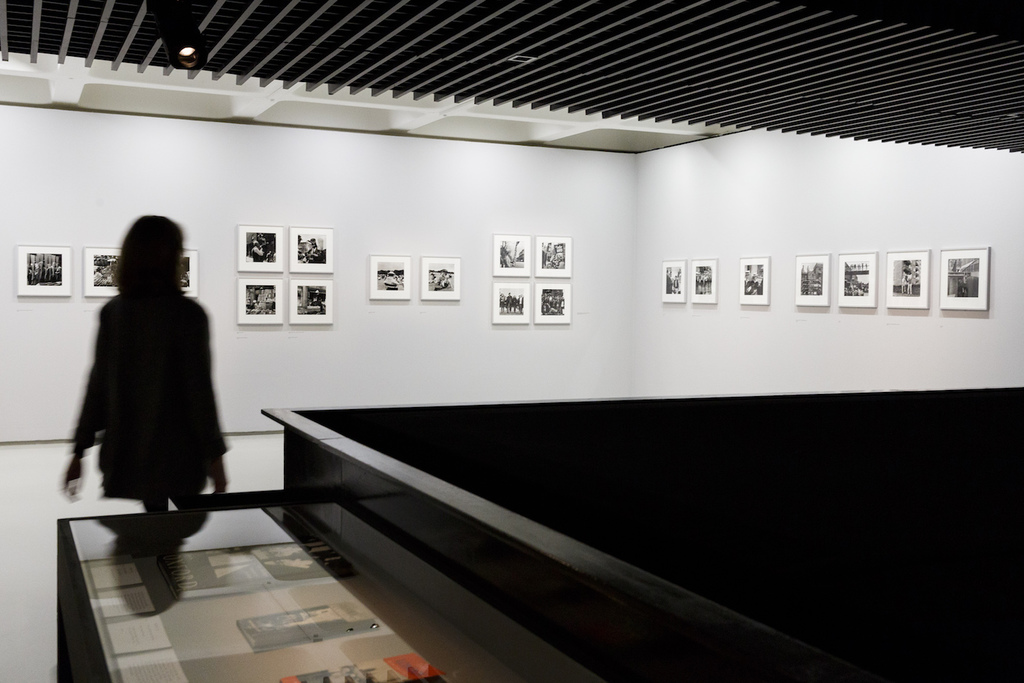 Cartier-Bresson is laughing at us in the 1930s, and Tina Barney carries right on into the 21st century. She travelled to Europe from America to complete a sort of modern, photographic version of the Grand Tour, and emerged with a collection of portraits called The Europeans. Her series made in England also wonders at our clinging to antiquated tradition. In The Ancestor, a middle aged man stands in the hall of his stately home beneath the painted portrait of one of his forebears, who, we presume, handed the property down to him through generations. The notion of aristocracy is made to seem preposterous from her transatlantic point of view. After all, the indefatigable American Dream demands a pulling up by one’s own bootstraps – and, to some extent, the direr one’s initial circumstances, the more Romantic success becomes. The setting of The Ancestor is luxurious and certainly expansive. The décor, though, is out-dated by centuries. The way of life it preserves is just as ancient, and hasn’t changed an awful lot since the first young men came to England from Europe during the Renaissance on their own Grand Tours. There’s a touch of the ‘sword of Damocles’ in the way the painting hangs above the subject’s head. It seems at once a talisman, a guardian angel, and an albatross, a weight on his shoulders. Barney’s photography highlights our idiosyncrasies with an unwavering clarity, managing to sum up two articulate arguments in one still image. The Europeans tend to be portraits, and the focus on an individual encourages the viewer towards introspection: “I know someone like that”; “I’m like that”.

There’s a touch of the ‘sword of Damocles’ in the way the painting hangs above the subject’s head. It seems at once a talisman, a guardian angel, and an albatross, a weight on his shoulders. 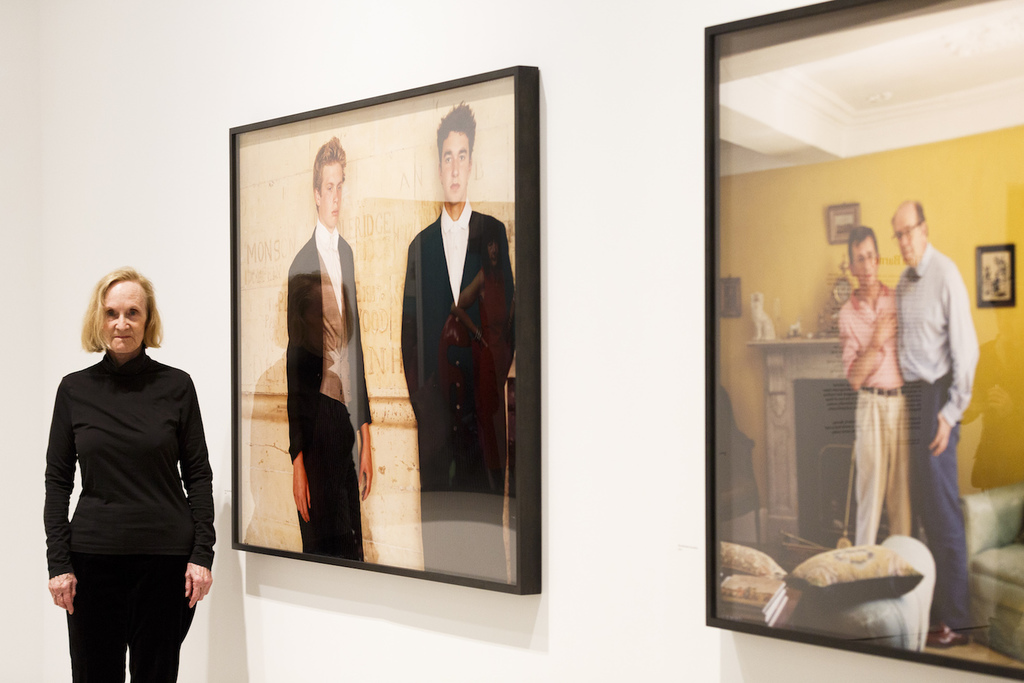 Some photographers’ projects were rooted more in politics that wry sociology. Edith Tudor-Hart was shocked by the poverty she observed on coming to England, and her images capture a real abjection and immiseration which we’re not accustomed to equating with life in Britain. Gee Street, Finsbury, London, 1936, literalises the perspective of 'looking down on' the poor, and sees a family group clustered in their tiny courtyard as the camera points from a balcony above. They’re pressed together to fit into the miniscule outside space, alongside washing on a line and broken furniture. Despite the squalor, there’s a real humanity, rather than a sense of cool observation, to the work of Tudor-Hart. In Gee Street, the woman at the centre of the group looks up and laughs; the little girl in her arms makes eye contact with the camera, and with you too. 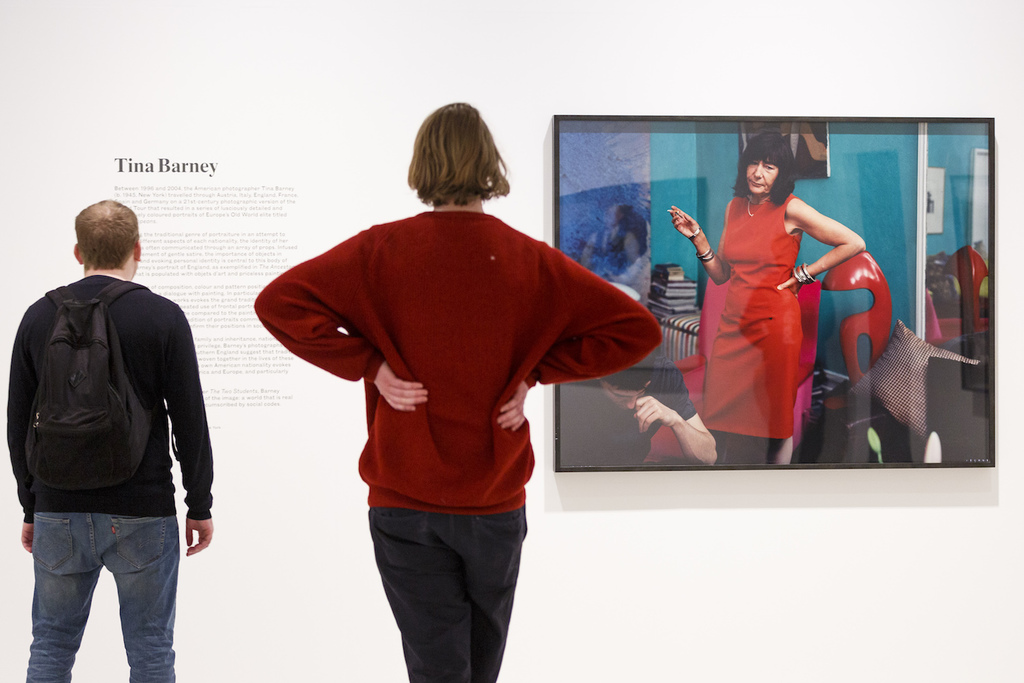 Lastly, there’s a sense of the bizarre to be found in Strange and Familiar. Cas Oorthuys’ work has an uncanny ability to render the normal strange; to reframe the familiar and innocent in a way that makes it look surreal and alien. Passers-by browsing the wares at a market are photographed from behind the counter, their faces obscured by what appears to be netting hanging from the stall’s façade in London, 1953. A man blows bubbles on a street corner; their spheres form the shape of a pipe and its smoke, in a picture from the same series. The ‘right’ angle taken at the ‘right’ moment, or a gesture as simple as moving behind a counter to assume the perspective of a shopkeeper, takes a quotidian scenario and demands its re-examination. Oorthuys’ photography evokes two conflicting concepts at once: on the one hand, the world is full of moments like these. On the other, every moment is singular, which – counterintuitively – lends them a degree of parity. 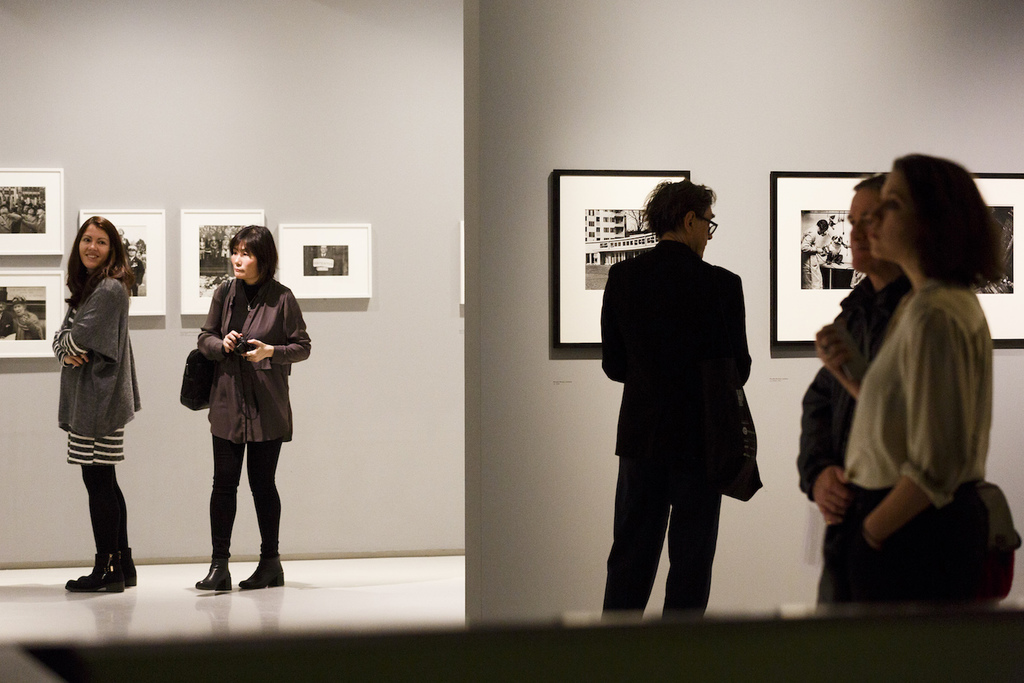 It is the power of photography to freeze and distil something essential about a moment in time that reminds us of the strangeness of the everyday, and the singularity of every instant and each individual.

Perhaps Strange and Familiar, curated by Martin Parr, teaches us what his own photography does – a moment, an impulse, captured and unrehearsed, has an ability to unsettle us when seen out of context. To walk past many of the people or scenes photographed in Strange and Familiar might elicit a smile, but most likely not even a second glance. It is the power of photography to freeze and distil something essential about a moment in time that reminds us of the strangeness of the everyday, and the singularity of every instant and each individual. 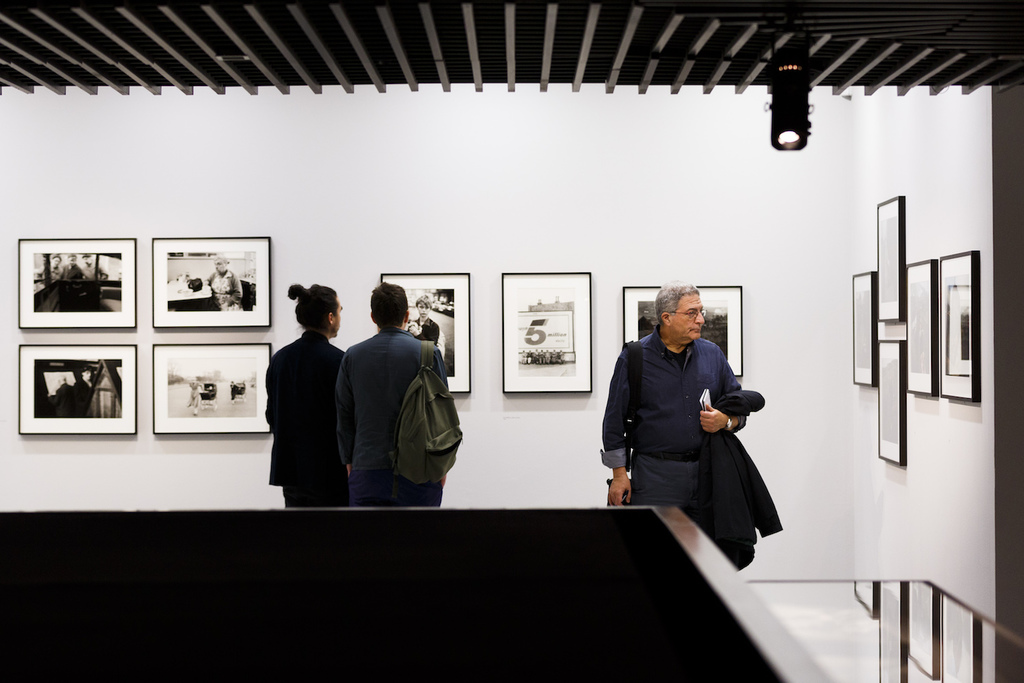